After our few days in Idaho, I definitely wanted more time there, but we needed to head to our summer job. With quite a bit of reluctance,  I agreed to come back for our third year to the same company.  Last year if you remember I was the Lead and had a really rough summer.  This year they had decided to hire a full time permanent person to be the lead (a decision I completely agreed with) and offered Lee and I the maintenance and admin position.  I really didn’t want to take it.  I wanted a clean start somewhere else, but Lee really likes it here and the $18 an hour was hard to pass up.  When I received personal guarantees from the department manager that things would be different this year I decided to give it one more try.  But I was nervous and on edge as the day grew closer.

The drive helped because after three years the Portland area feels “homelike” to us and the first views of Mt. Hood thrilled as they always do. It was also nice to see some people we had missed and since the snow was still blocking our site up on the mountain we spent a couple of days down along the Clackamas river which was fun.  Jack seemed a little confused at first.  But soon he was exploring the woods and trying to catch chipmunks.  We spent a couple of days filling out paperwork and talking to our new boss who I really liked.  He is a super chill guy and was really glad that we had returned.  That made me feel much better about the upcoming summer and I relaxed a little. 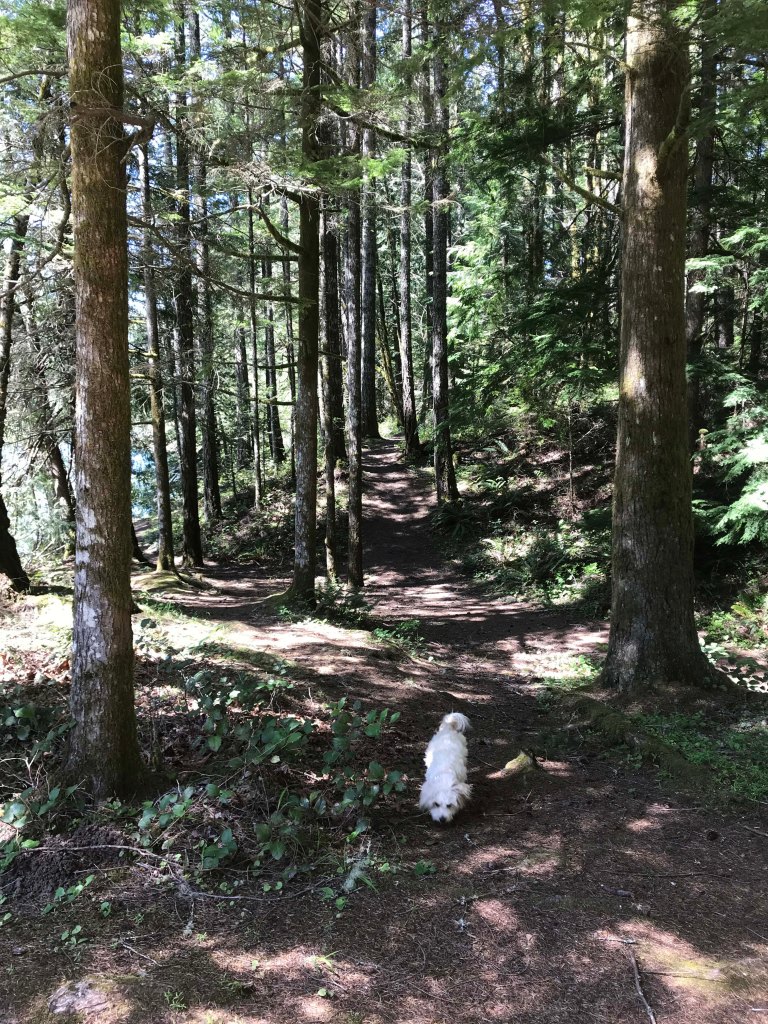 Our site for a couple of days. This was the same site we were in two years ago and its a beauty,

And a trip to my favorite bookstore in Estacada. It is a non profit and all the hardbacks are $2.  I stocked up on healthy food cookbooks in anticipation of trying lots of new heart healthy recipes this summer.

I almost hated to leave, but I was finally getting excited about getting back to the lake and as soon as our sites were clear we headed up the mountain to get settled in. 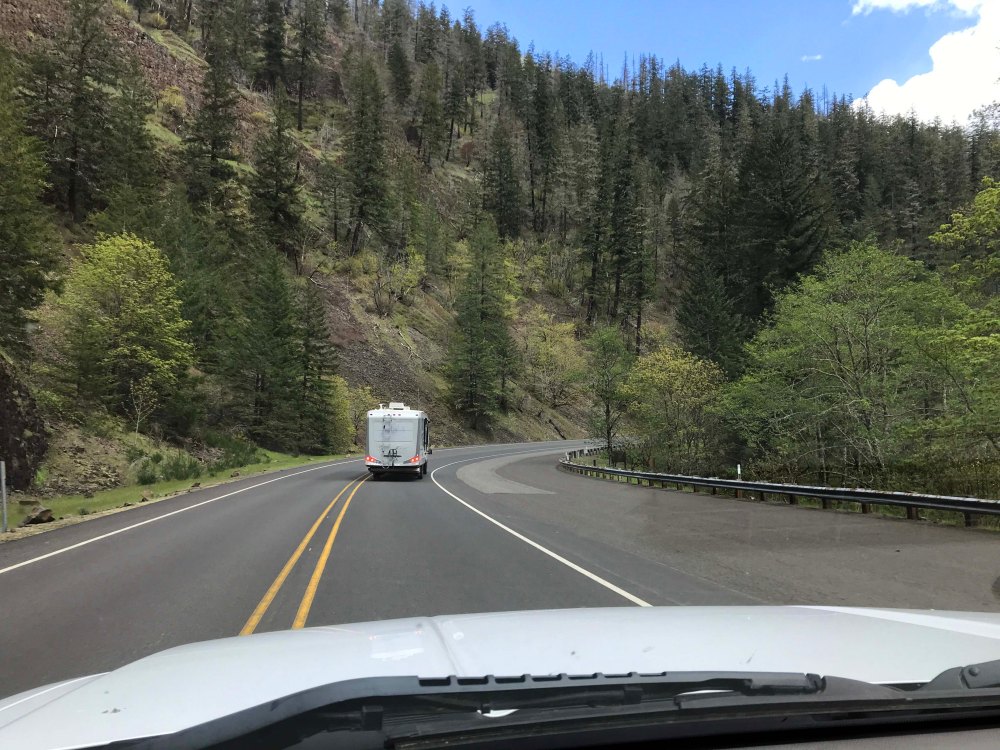 The last section is dirt road and as usual it was super dusty. 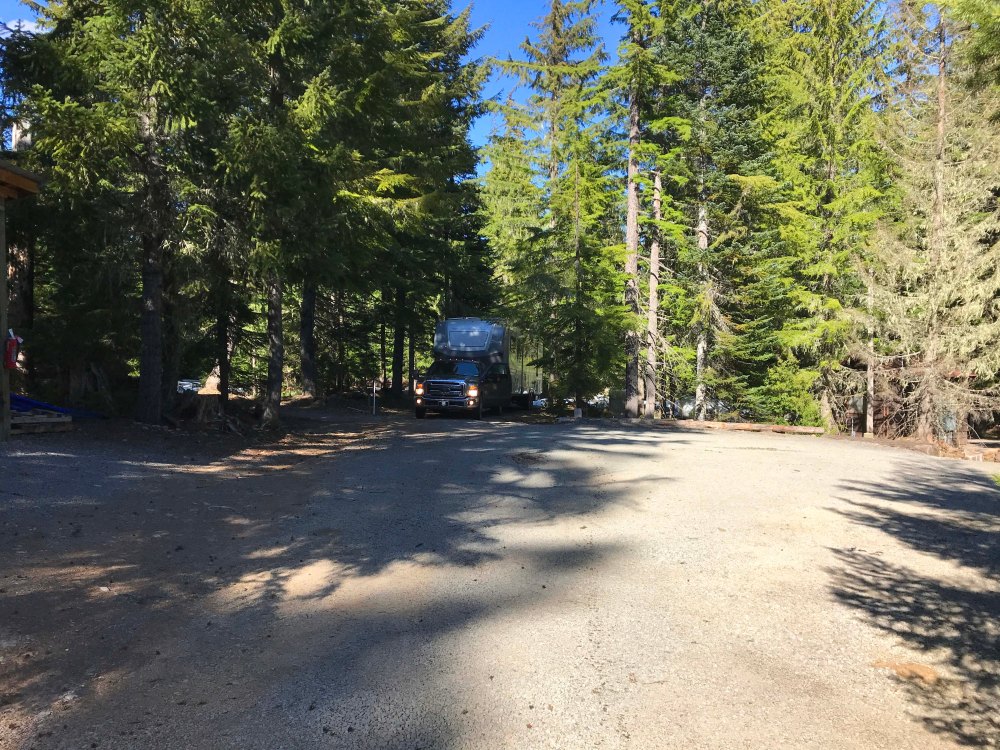 Hooray we made it 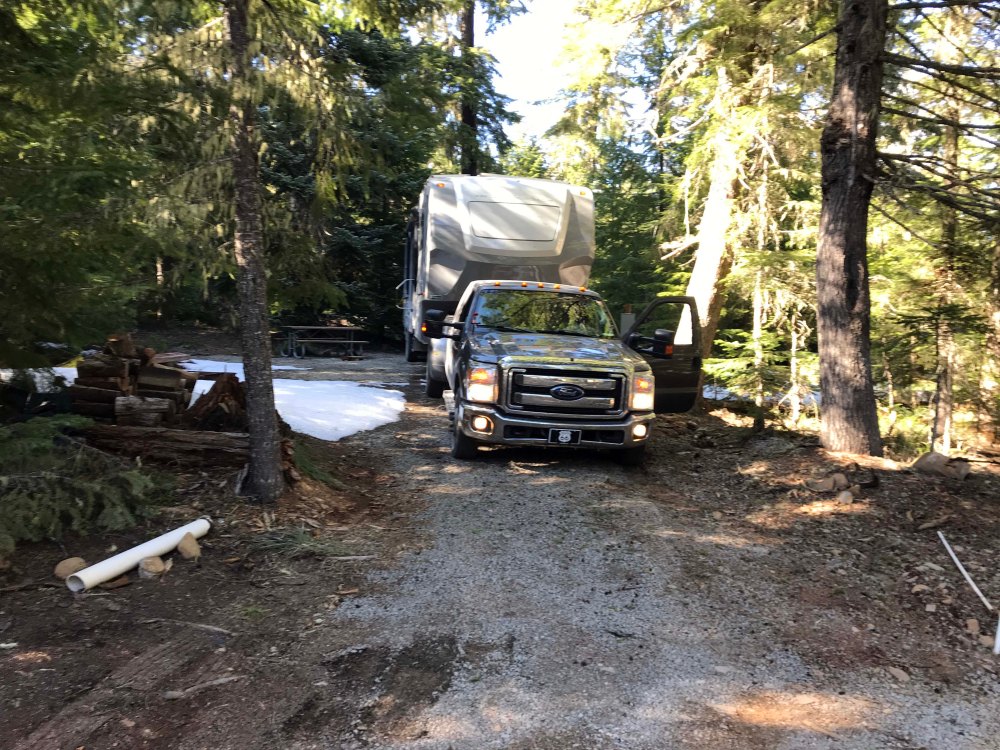 Squeezing into a different site.

Unfortunately right off the bat we had issues.  Last year I pleaded with the maintenance department to level the sites because they were so terrible.  They look ok, but when you get into them you are forced to either dig holes for your tires or jack the front up very high.  At the end of last year we even spray painted the area that needed leveled (at their request) but it was clear nothing had been done.  Since the most level spot was already taken, we chose the second most level spot and squeezed ourselves in. Lee still needed to put blocks in the front, but it wasn’t as bad as the other two spots,  In those cases the people dug holes for their tires and used lots of wooden blocks to jack the RV’s up…craziness.

We’ve tried to communicate to our bosses what a big deal things like this are, but unless you have ever lived in an RV for an extended amount of time I don’t know if you get it.  Even a 1% difference in level can really cause balance issues, and for me at least it feels like I am living in a boat.  Imagine getting up in the middle of the night to go to the bathroom and falling into a wall because you are off balance.  That’s what it’s like, and 5 months is a long time to live that way.  We also ran into problems with the water line and sewage tank.  Last year they started the job of running a water line under the road but never finished, so we are using 5 lengths of hose which not only leak but we also have really low water pressure.  The sewer tank we were provided needed a hole dug for it so it would be lower than our RV, but we waited until our black tank was completely full and ultimately Lee had to build extra sewer hose and build a funky contraption to make it work. The answer we have consistently received was maintenance was behind and other issues took priority, which might have been OK if we didn’t talk about these issues at the end of last year.

Actually I don’t think its OK.  Our sites are part of our compensation and we have the right to expect what we were promised.  We have 85 year old camphosts digging holes with pickaxes and building contraptions just to make these sites manageable.  Here’s some pictures to prove it.

Thankfully we only needed a couple of blocks 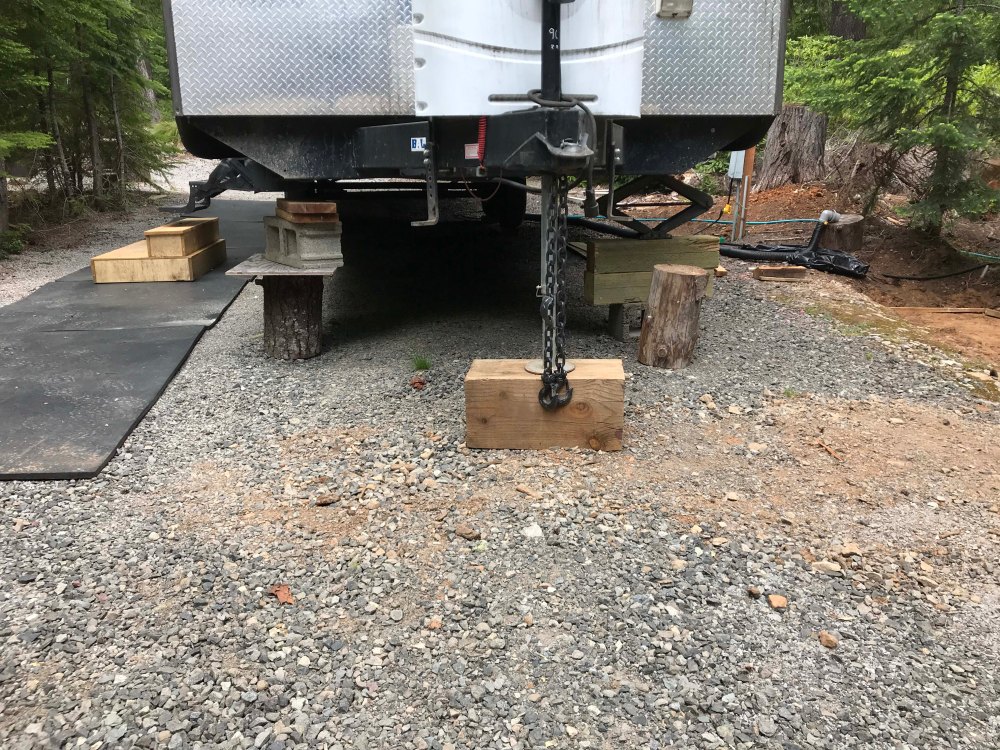 Our neighbor in last years spot…yeah that’s not safe 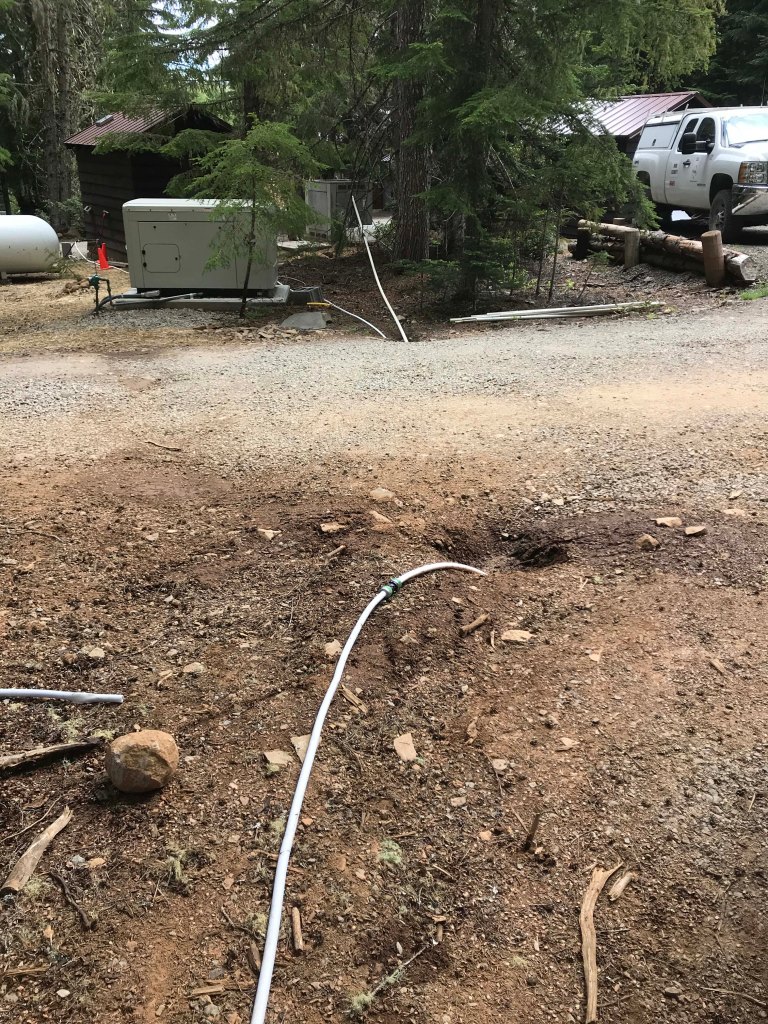 Oh and my personal favorite, the hose under the road. You can see the dirt darken from the leaks.

On the plus side we were able to put the dog fence up and create a little yard.  The downside is Jack can hop right over it when motivated, but usually he stays close when we are around.

And he really likes being down by the lake.  Hopefully when it gets a little warmer I will be able to coax him in.

Look at that face. Just looking at him makes me happy.

4 thoughts on “Settling in at Timothy Lake”