When you live in a remote location, one of the first things you usually do is determine where you are going to go to the grocery store, get your hair cut, get gas etc, One of the most unique things about Timothy Lake is there are several choices on a home base.  It’s hard to explain so I finally made a map to show you.  Every red circle is a possible home base location and each one is over an hour away. 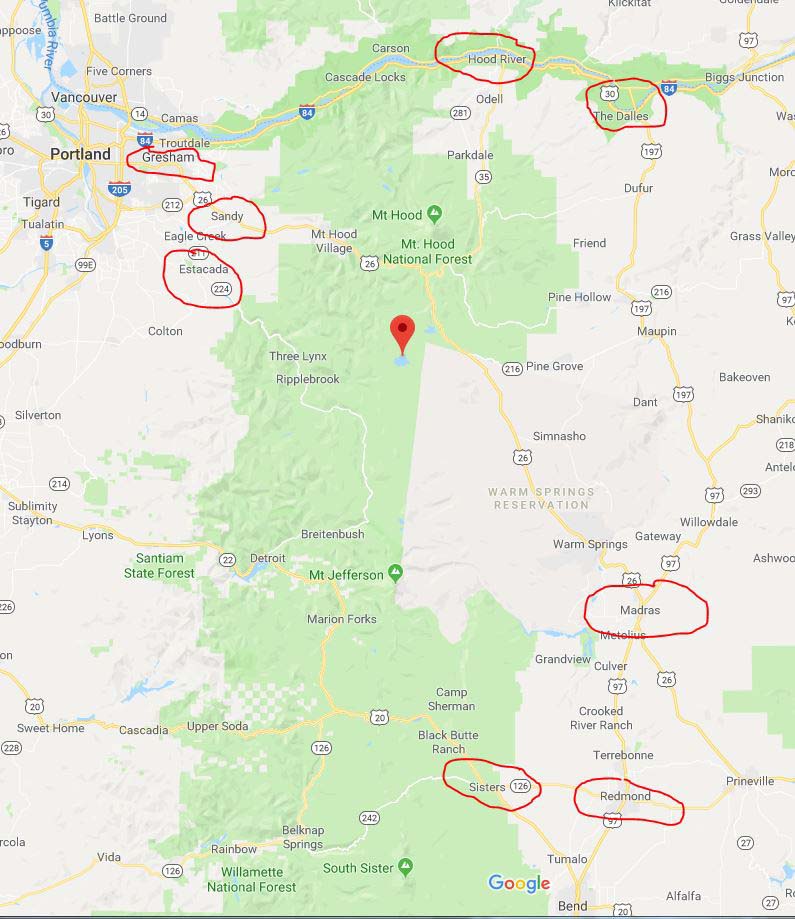 Last year we used Estacada, because we made numerous trips down to that location each week in the work vehicles, but since they have changed some things this year and we now have to use our own truck, we gave the choice some thought.  One of the major advantages of returning to the same place and staying there for a while is the opportunity to participate in local events.  When you are moving around all the time, you might get lucky and be in a place at just the right time, but that is generally happenstance rather than planned.  Even if you stay in a place for a while, you might find yourself missing some cool stuff, so one thing I have learned to do when we hit an area is check out the local calendar.  In the case of Timothy Lake,  I am actually checking multiple towns.

There were significant pros and cons to each choice, and I won’t bore you with all the details, but I will share that while I was researching the towns I stumbled across a dog training program in Hood River.  Back in Keene, I took our dog Molly to training at the local humane society, but I didn’t think we would ever be able to do this while traveling.  For one thing it is a 4-6 week commitment and we are rarely in one place for that long.  For another, the classes would have to fall on our days off and what were the chances of that happening?  Imagine my surprise when I saw there was a  “good manners” class starting in a couple of weeks in Hood River.  It was over an hour each way and the class was $175, but the schedule we could make work.   Despite the cost, Lee agreed it was a good idea, because Jack is hitting those teenage years and at times can be a handful.

Our first class was a two hour orientation without Jack and we learned quite a bit.  We both walked away feeling like we had picked a good time to start training out some of these behaviors and we really liked the facility.  As a bonus the class was at 5:30 so we would be able to go to eat after the class. It also gave us a reason to get off the mountain, which was another huge benefit as far as I was concerned.  The next week we took Jack and he ended up doing really well.  He is a smart puppy and is highly food motivated which worked really well. 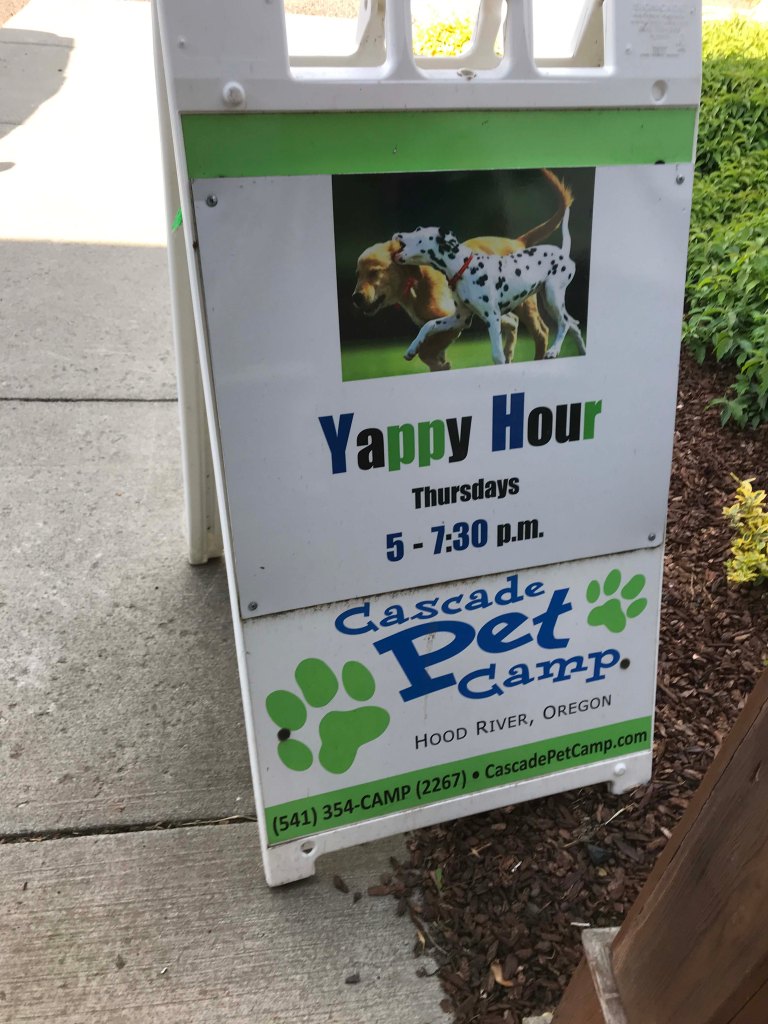 Every Thursday they have a Yappy hour with drinks and free dog play…if it wasn’t so far away I would definitely attend this as well. 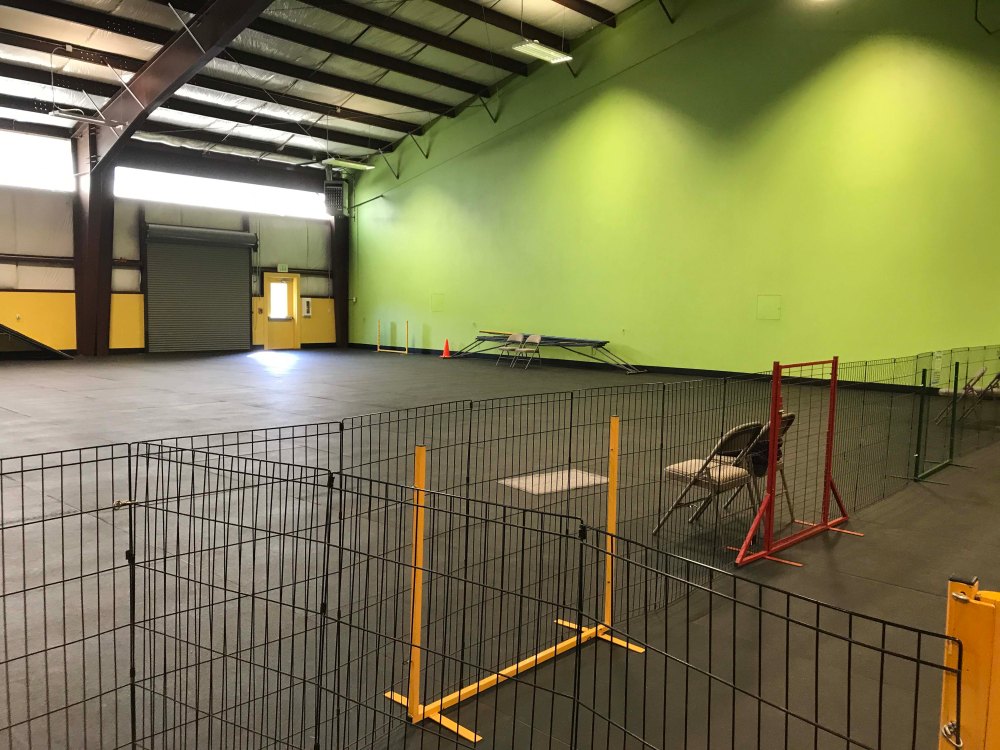 This is not a play class so the dogs are spread out really far from one another. 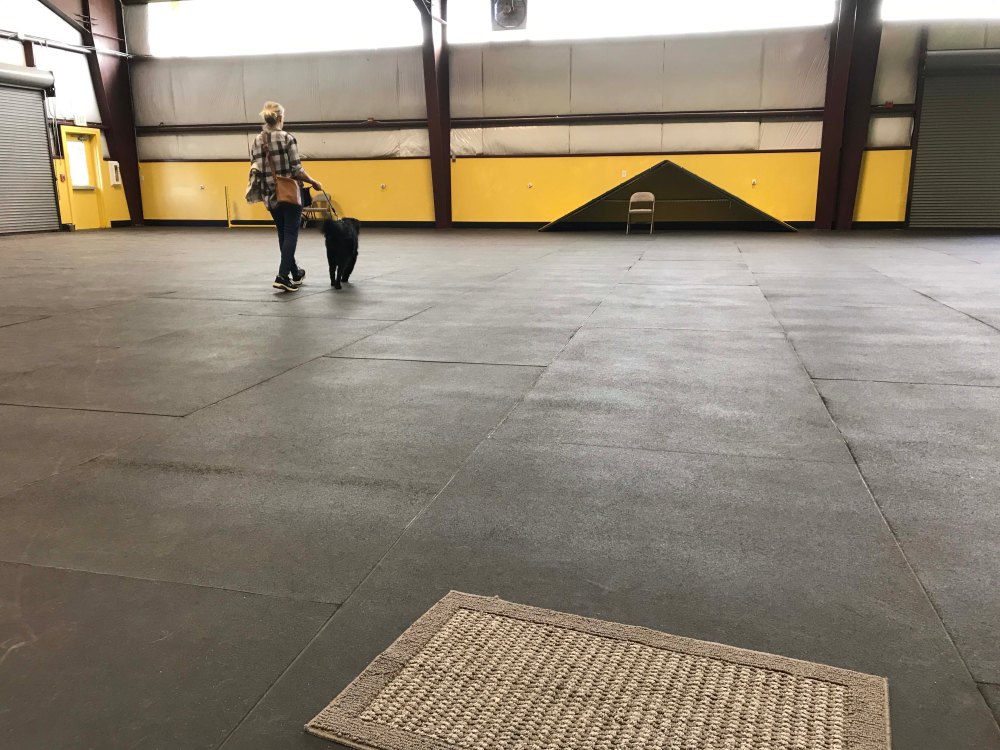 Jack liked all the dogs except for this one. For some reason he got freaked out whenever this dog was close by. 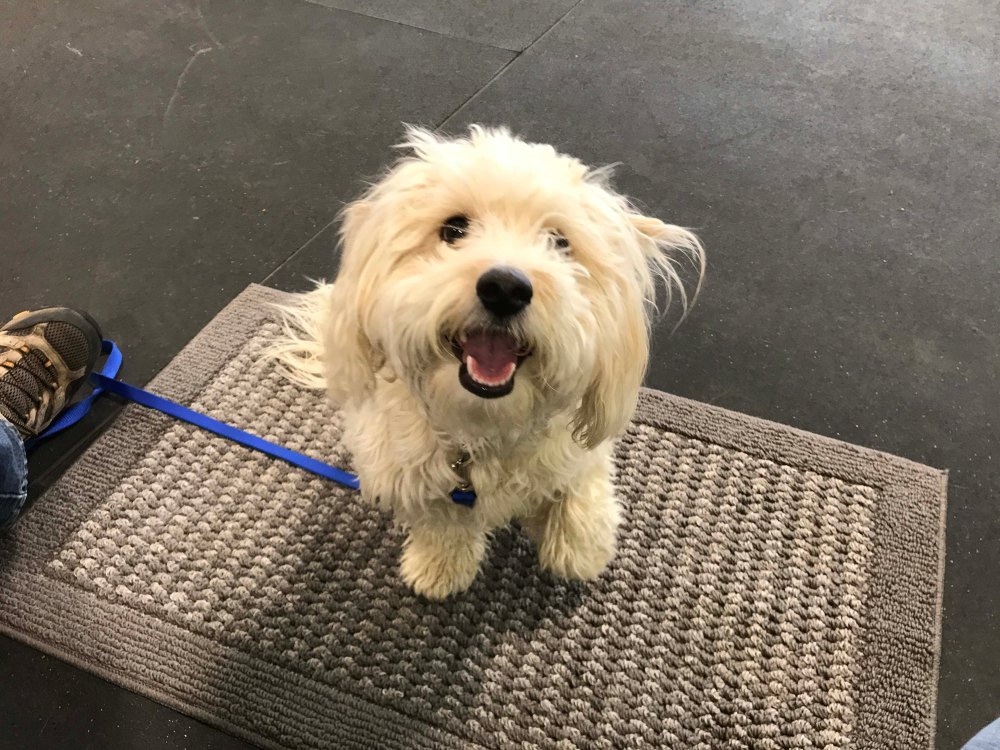 Mostly though he was totally focused…which was awesome. 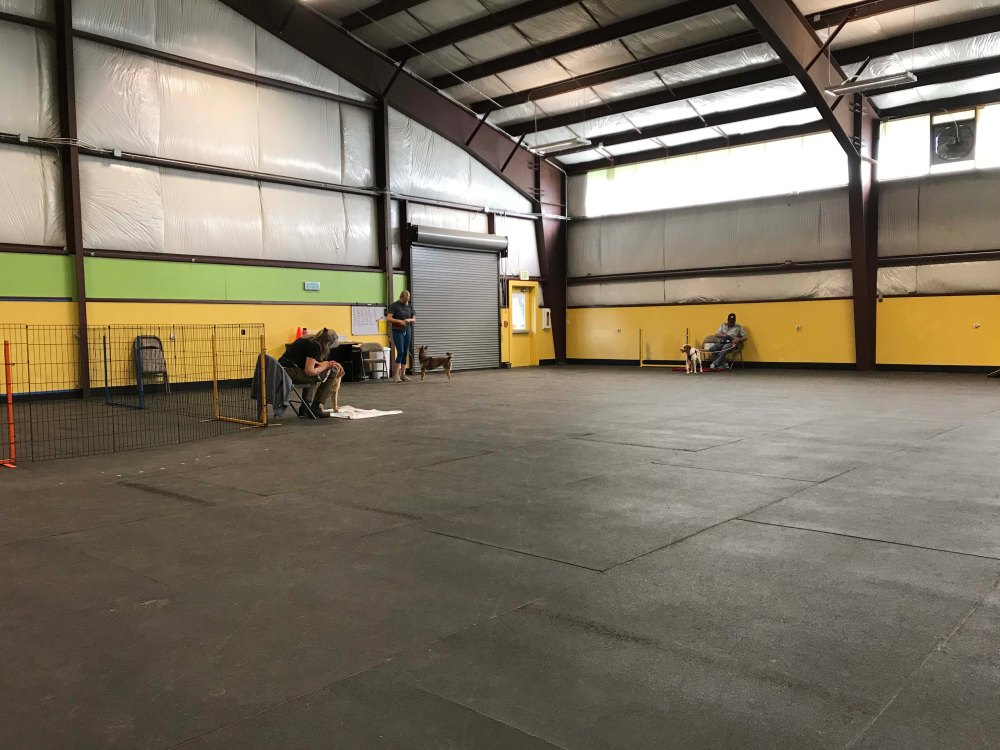 The trainers dog has been in training for 4 years and was amazing. 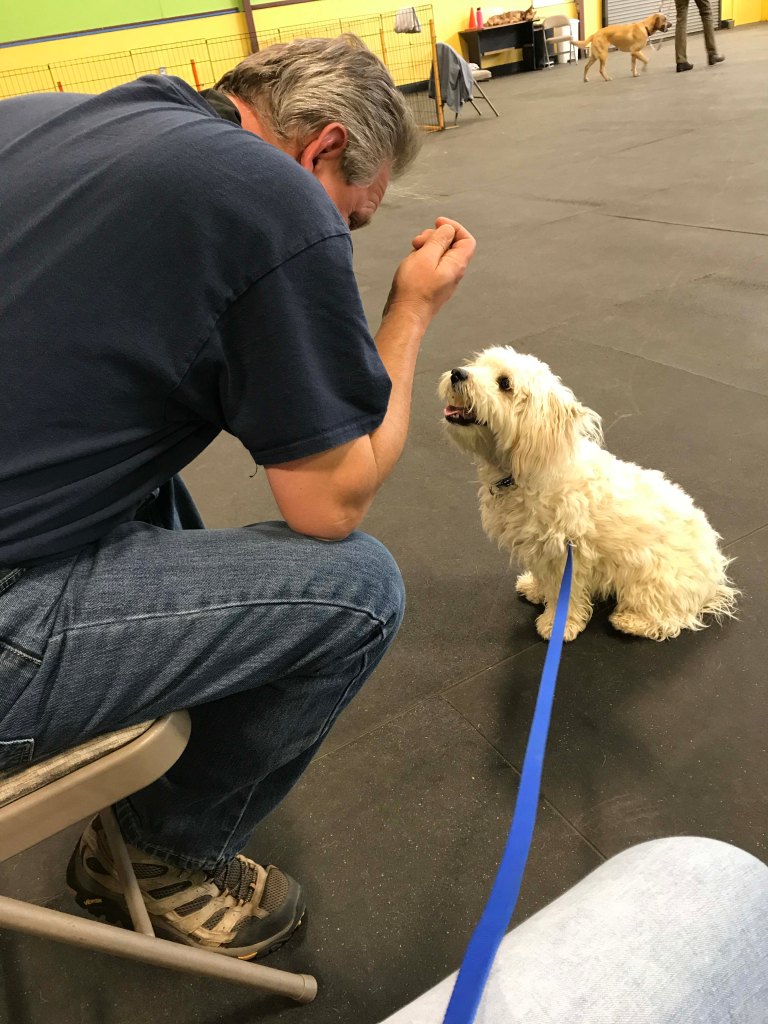 Lee and I took turns working with Jack.

The only downside of the classes is that Lee and I had different expectations.  I think Jack is doing great but Lee was getting frustrated because all the behavior was treat based and he wanted him to do things without treats.  This reminded me of differences of opinion we used to have when we were raising kids and all of the sudden the classes weren’t so fun anymore.  Turns out training is work, with homework and everything, and as smart as Jack is we hit a few roadblocks along the way. I’m really glad we did it though, because the classes are more about training the people than the dogs and I have definitely seen some improvement.

As positive as the experience was, when I started looking for a groomer, I decided to go to another place.  Their prices were pretty expensive and since I don’t like the grocery stores in Hood River we couldn’t combine the trip with something else.  I checked for groomers in all the cities that were circled, but most of them had no openings.  When I called Creatures Pet Store in Madras they had several openings, which in retrospect should have been a dead giveaway.  I made an appointment for Thursday and Jack and I headed down. 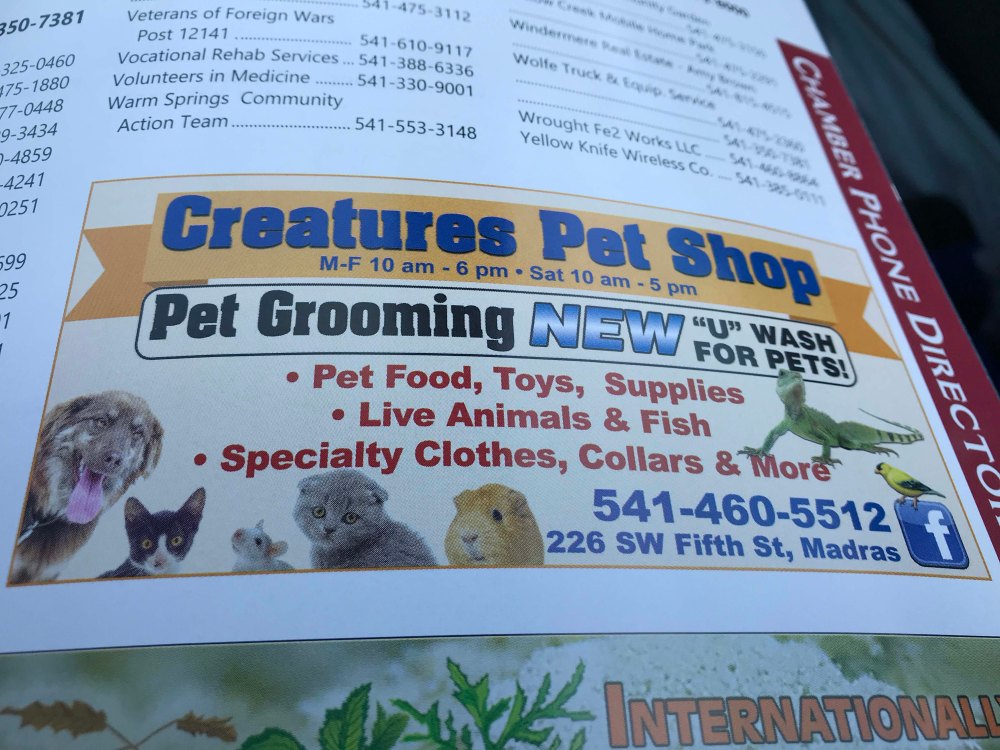 When I dropped Jack off, it was a super cute shop and I explained that I wanted a puppy cut, with a sanitary cut on both ends.  The young woman who was going to do the cut was mainly focused on Jack, but didn’t ask any followup questions so I thought I was OK.  I left and went and toured the town.  I went into the Heart of Madras thrift store which was terrific, and got some food at Great Earth a local organic store.  To be honest I have always thought organic places were over priced and never ate at them BUT they have the advantage of being super transparent about their ingredients and I am finding that to be worth the extra money when I eat out. 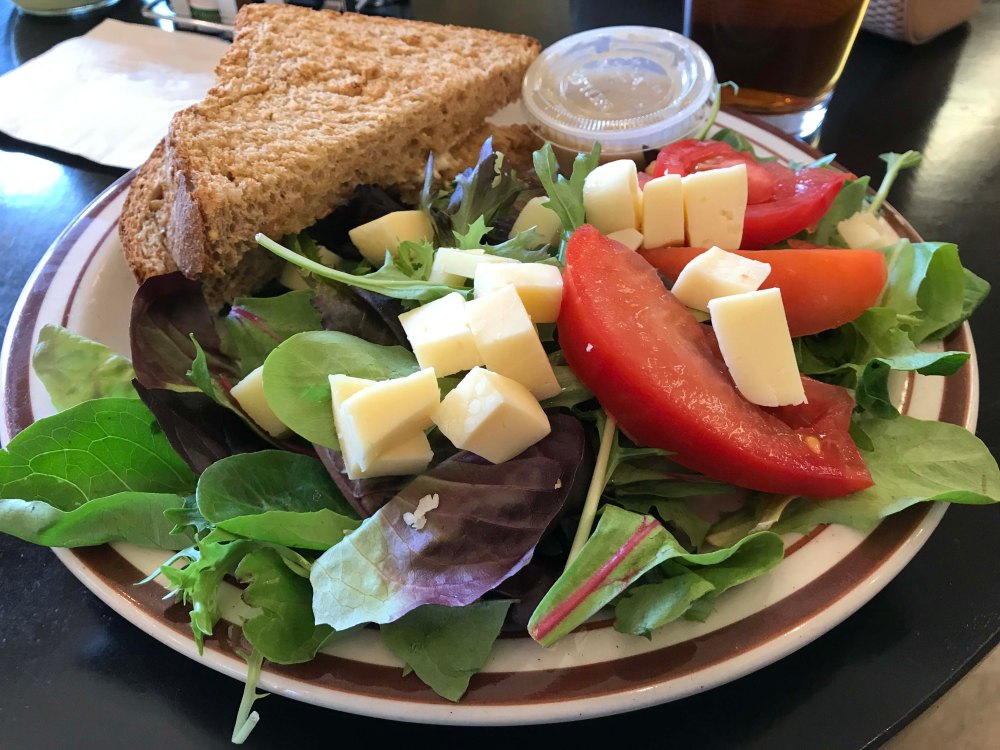 The bread was home made and delicious.

So I was happy.  A little bit of shopping, a little lunch, and I went back to pick up Jack.  It’s worth mentioning that the owner told me it would take 90 minutes, but when I arrived 55 minutes later he was already done.  They brought him out and this is what I saw. 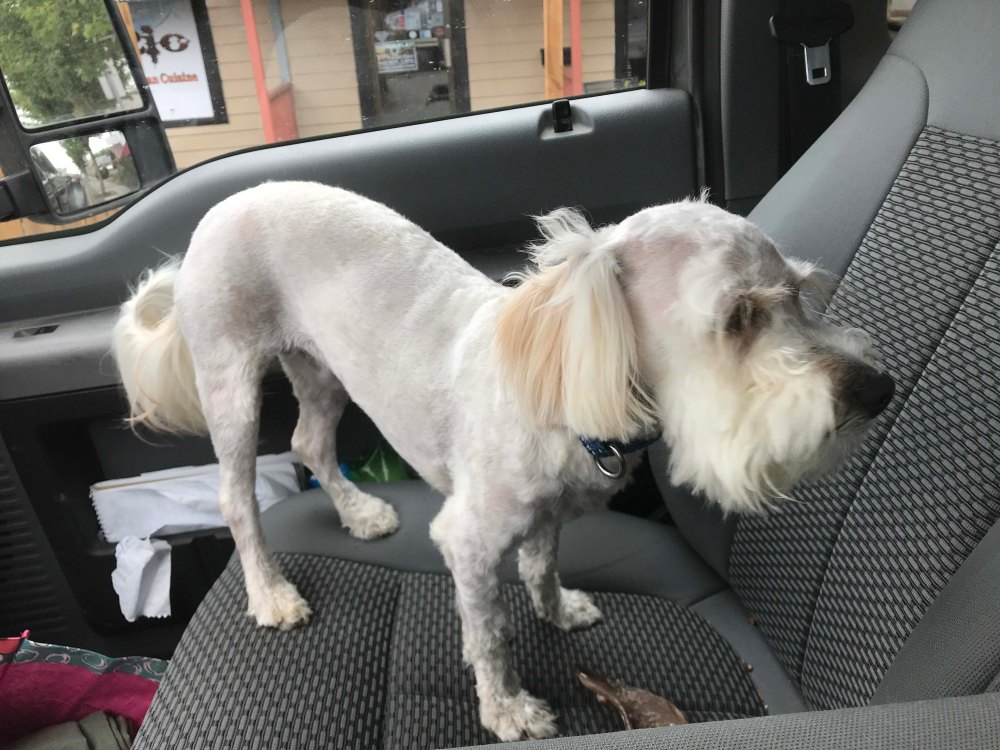 I can’t even express to you how upset I was.  All she did was shave him and since the weather at Timothy is still in the 40’s at night that is definitely not what I wanted.  Plus he looked terrible.  Scroll back up and see my cute little boy and then look again.  The owner seemed perplexed, but someone else was dropping off their dog as we were leaving and said, “I want mine short, but not that short.”  Totally proved my point.  I was angry because the groomer simply didn’t listen and instead of dealing with the mats in his hair took the easy way out.  Normally I would have let something like this go…it is only dog hair that would grow back, but he was shaking and when they told me she had clipped his ear it was enough.  The owner saw how upset I was and gave me $25 off ..forgoing her profit on the deal, but I would never ever go back there again.  I also went to do a Yelp review but they aren’t even in Yelp that I could find.

It wasn’t just the haircut either.  His behavior was very different for a couple of days and he has definitely been cold as well.  A week later it is finally growing out some but he was mad at me for several days.  It turned a great day into a lousy one and added to my stress for the next several days.  Next time I will just do it myself and will never go to a groomer again without making completely sure we are on the same page and they have several good reviews.