It’s been 9 days since my last post, and the reason is things have been bat crazy.  I mean that literally, there have been actual bats, but I am jumping ahead, so let me catch you up a little.  First of all I went down to the fireworks display in Estacada and really enjoyed it.  Lee wasn’t feeling well so he stayed home, but it was a nice enough show that it was worth the long drive there and back.

Then Lee and I actually got to go out an eat a meal one night which was cool.  I had a wonderful Huckleberry shake at the Huckleberry Inn and Lee had a huge country fried steak.

And I took another day, again by myself, and went to the Fruit Loop and Hood River to get some of the first cherry crop.  Amazing.

So you are probably wondering, why so little activity?  Well the answer is we had some staff changes up here and have been working very hard to cross train people and redistribute workload.  Folks tended to own their own lane up here, so it’s critical with less people folks can work multiple positions if there is a need.  Since Lee and I had learned most of the positions, we were carrying a lot of that load initially, but things are smoothing out a bit and we are coming up for air.  Plus, aside from the staffing changes there have been a series of events. We had a film shoot at one of our locations that lasted a whole day.  Lee spent some time down there just watching and it was pretty cool. 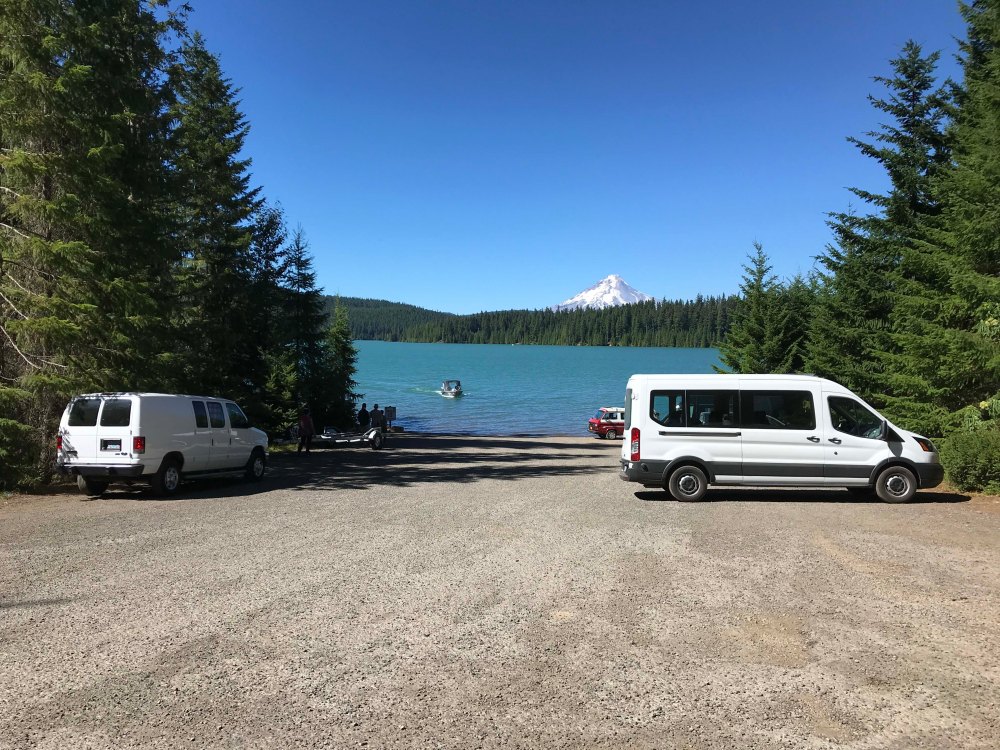 Film crew, it was an ad for the Ipad and they had a vintage camper which was pretty neat. Although to be fair this is not a spot you can camp overnight so see you can’t always trust what you see on TV.

We also had a camper with a heart attack (they were life flighted and are fine), missing kids (we found them), a guy back his truck into the lake.  Yes I am not making that up..not really sure how that happened but here’s the picture.  Our head of security winched him out, and yes the entire bed of his truck (and the drivers seat) was full of water.

It hasn’t all been bad.  We managed to have a potluck/birthday party for one of our camp hosts, and I am trying as much as possible to give people extra breaks as our busy season gets in full swing.  It’s important to say that we are now filling up completely in all campgrounds by Thursday and every week that gets a little earlier.  Our day use is packed, which has put extra pressure on Lee, and I am covering shifts for folks at least once a week.  Still we feel pretty good overall, although we are both being careful about pacing ourselves.  Burn out at this pace is a real possibility.

Oddly one of the most stressful things has been the bats.  We have some interns staying in the duplex next to the office and on Friday and Saturday the girls side had bats flying around the room.  Both nights they ended up sleeping down in the living room and I was once again at a loss on how to handle the issue.  The head of security once again came to the rescue and shooed them out, but the same ones were either coming back or we were getting new ones and no one could figure out where they were coming in.  So I punted and on Saturday called the maintenance on call tech and they were kind enough to bring up a sonic device that we hoped would drive them away. It did work.  It drove them out of the girls room and into my office, but thankfully someone else was in there at night when the bat came out to play.  Now I am afraid to turn the lights off in there, and am just hoping that in a few days the bats will be gone forever.  Don’t get me wrong, I really like bats and think they perform an important function, but I want them in their little bat houses and not in my working/living space. One more thing that I wasn’t prepared for, but if nothing else this job is teaching me to be prepared for the unexpected.

The good news is Deb and Steve are coming up for 9 whole days and we are incredibly excited to see them!! Their being here will force me to start getting out of here on my days off so hopefully you will be seeing some pretty pictures soon.  And sorry it took me so long to get to this.  Most of the stuff that is happening I simply can’t talk about and when that’s the case I just don’t feel motivated to write.  It’s one of the downsides of having this job, but I am hoping that as things settle down that will get better.  It might not be until after August though, so don’t be surprised if my posts are a little sparse until then.   If you are Jonesing for a Camper Chronicles fix, go back and re-read about Utah 🙂 That was a fun month and packed full of awesome blog posts!

Leave a Reply to Nancy and Bill Cancel reply