Because this incident happened to Lee, I asked him to write this post.  He says it’s because I am a slacker, but I refuse to accept that premise 🙂  Enjoy!

For quite some time we’ve been having some trouble with our jacks. We have the Lippert Ground Control 3 system, and they’re electric, not hydraulic. The system has a pretty “picky” voltage requirement, so if voltage drops below the threshold, either from a low battery, or high amperage draw, it will cause an error message on that jack, and you have to clear the code to do anything at all. I consider this a pretty serious design flaw, because once you get an error code, you can’t see any information on the screen other than “ERROR” and whichever jack is causing the error. There are lots of things that can cause errors, and you can generally still run jacks up and down, you just can’t see information on anything at all. The clearing process is pretty simple, you lower all of the jacks at least 6 inches from their full up position, and then retract them all by pushing the retract button and holding it until they are all retracting. Again, not a big deal, except that once you’ve done that, you’re back to square one, trying to drop the landing gear, and take the weight off the hitch, and unhitch, then level. If you get an error code again, then you have to go through the process all over again. It can be maddening. And for us, there was no rhyme or reason as to which jack would “error out”. Over time I noticed it was the front left more than any other. More and more lately, during the clearing process, the front left jack would just stop moving after an inch or so of travel, and I would have to raise or lower it by repeatedly pushing the buttons while it traveled that inch or so.

At our current location, we’re on a very unlevel site. The front of the site is VERY low, and so in order to get level I had to raise the front of the rig up A LOT.

Here’s an idea of how much:

And since raising the nose is when most of this stuff happens, when we got here we were only able to get within about 2° of level. It would just extend the jack a few millimeters and then stop. 2° might not seem like much, but that’s a fair amount of unlevel, and takes some getting used to. After a month or so I started to get concerned that it might interfere with adequately draining the black tank, so I set out on a bright and fine morning to attempt to get it to go up a few more inches. I encountered the same problem, so I decided to start from scratch by lowering it, hitching up, and trying again. This time it was much worse. I was well beyond 4° when it stopped running. It would run a few millimeters and then quite. I called Lippert and after much discussion they decided it was a low voltage problem, and recommended changing my batteries. I have 4 AGM batteries that are in excellent shape, and my gut told me it was something else, but they insisted it was the batteries, so I let it go. Since I wasn’t about to buy new batteries, I asked them if there was a way to over-ride the error code to get the jacks to go up just a few more inches. They instructed me to pop off a rubber cap on the bottom of the jack motor and use a socket and a cordless drill to manually raise and lower the jacks. I was’t looking forward to that, because it involves either running two drills at the same time or moving it just a little and then going to the other side, and moving that one, back and forth, otherwise you can put too much torque on the rig. I lowered the tailgate and then opened the front generator compartment to get to the jacks, and put the drill on. It didn’t budge, so I turned up the torque a little on the drill. It rotated in my hand a little, so I turned up the torque a little more, and planted my feet, and wedged myself in really good and braced myself so the drill wouldn’t spin my wrist, and would transfer the torque to the jack motor. (Safety tip, when you’re using a high torque drill, and you think it might spin on you, be careful. You can break a bone with one of those things. And if you’re working in really close quarters, the lower half of that drill can spin right around and that big fat battery can smack you right in the face, hard. Ask me how I know.)

When I was ready for it, I squeezed the trigger very slowly and ramped up the speed. It fought a little, then I felt it spin freely, and thought everything was working as advertised, until I glanced at the jack and could it wasn’t moving at all. I was all half folded over and cramped, and getting frustrated so I decided to pull out, and stand up straight, and set down the drill so I could do some serious industrial grade swearing and maybe have a cigarette and think this over some more. The instant I was clear and stood upright the entire fifth wheel wheel dropped and fell the six inches between the hitch and the kingpin. If you’ve ever wondered how good your truck suspension is, drop a fifth wheel on it from six inches. The only thing that kept the front of the rig from hitting the ground was that I had left the truck under the kingpin because I just wasn’t entirely comfortable, and so I just rolled the truck forward enough to clear the locking jaws on hitch, so when it fell, it landed perfectly in the hole, right behind the jaws. But since the gate was down, and I was between the gate and the front of the rig, I would’ve been pretty seriously hurt when that thing came down because I was occupying the space the rig entered, and since you can’t have two things in the same place at the same time, and I’m significantly squishier than the rig….

So, after my heart started beating again, I double and triple checked that the pin was where it needed to be, and slowly backed the truck up so the jaws locked. Once it was secure, I was able to pull the spring pin on the front gear extensions and raise them up. I could get the right jack to come up under power, but the left one wouldn’t budge. I poked around inside to get a feel for how difficult it would be to remove the jack (not at all, it turns out) and had the jack out and on a bench within about 10 minutes. I removed the foot, and spring pin, and the inner sleeve extension, and pulled the motor off. I was left with just the outer tube and the outer sleeve, and once I removed the cotter pin holding them together, I had the screw, and the collar it threads into on the inner sleeve. The way these work is that the motor turns the gearbox, which turns a small ring which is attached the the end of the screw. As the screw turns in the collar, it pushes down on the sleeve and lifts or lowers. I put the screw and sleeve on a workbench and popped a screwdriver through the cotter pin hole to turn it. It turned pretty smoothly and when it got the end, out fell a bunch of little bits of metal, which turned out to be pieces of the collar thread.

So at some point there was some binding or something that caused the screw to cut about half of the threads from the collar, and that allowed the screw, with all of the weight of the front of the rig, to slip through the remaining threads. It is truly amazing to me that this is all there is there to this system, and that there’s no real safety feature to prevent this.

Installing the new jack was relatively simple. The replacements come with the motor, the outer tube, the inner sleeve, the extension, and the foot. The spring loaded pin bracket is sold separately, as is the pin that holds the foot to the extension. 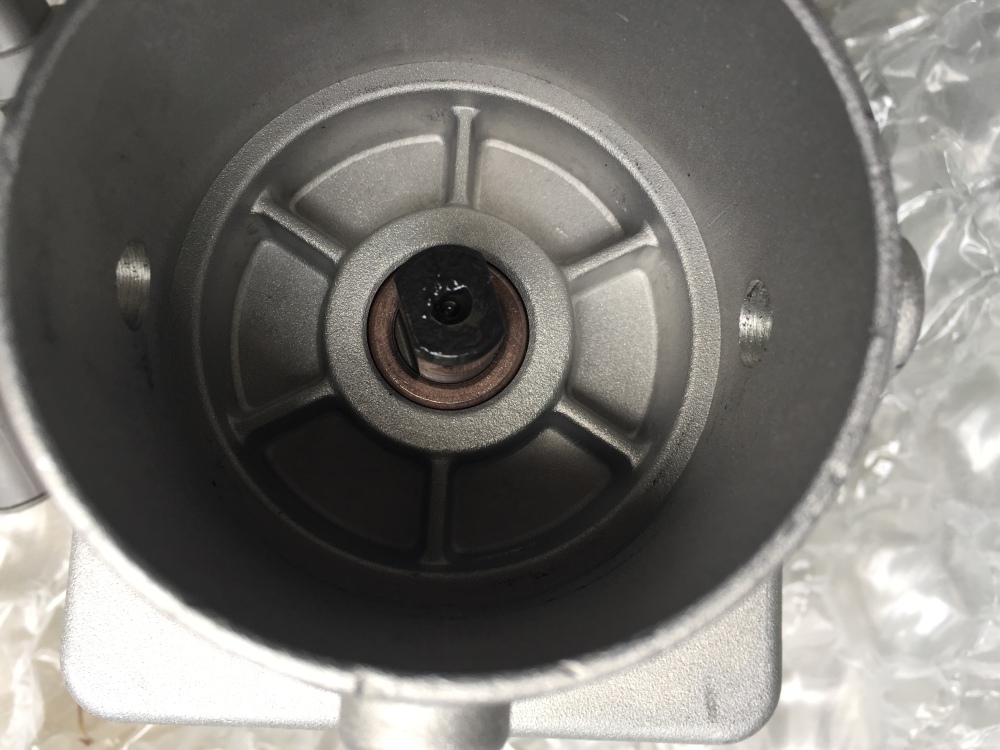 and this is the part on the outer tube that it fits into. 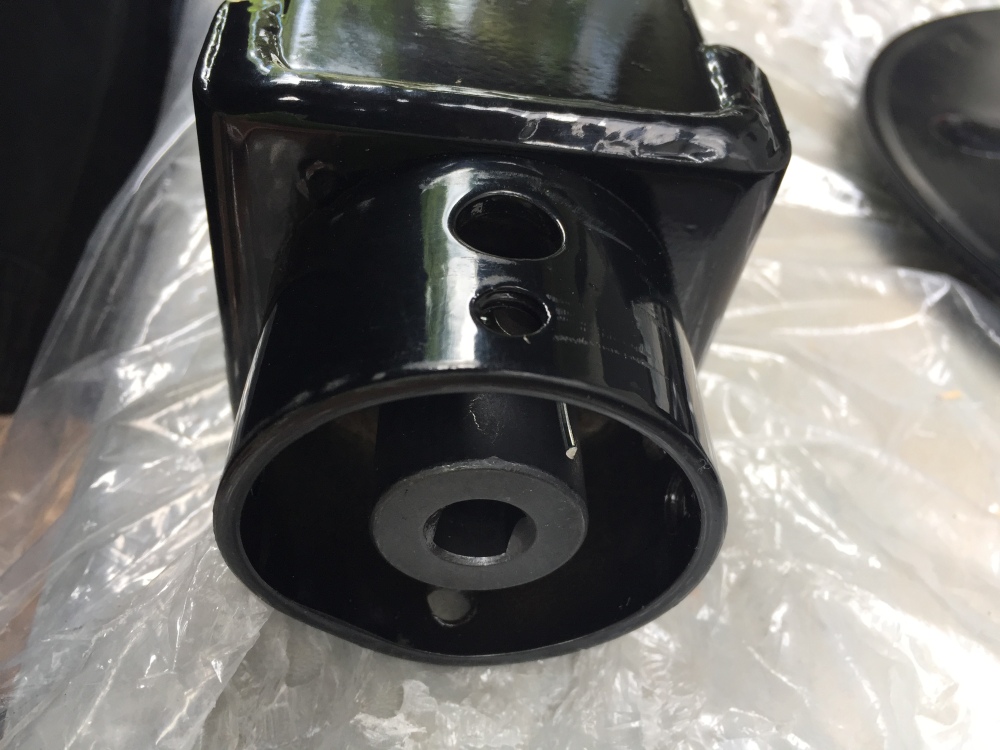 They’re both shaped so they only fit together when they’re lined up correctly. When the jack is in place, there’s no way to see the ring, so I just used my phone to take a picture of the position the jack ring was in so I could rotate the motor spindle to that position. 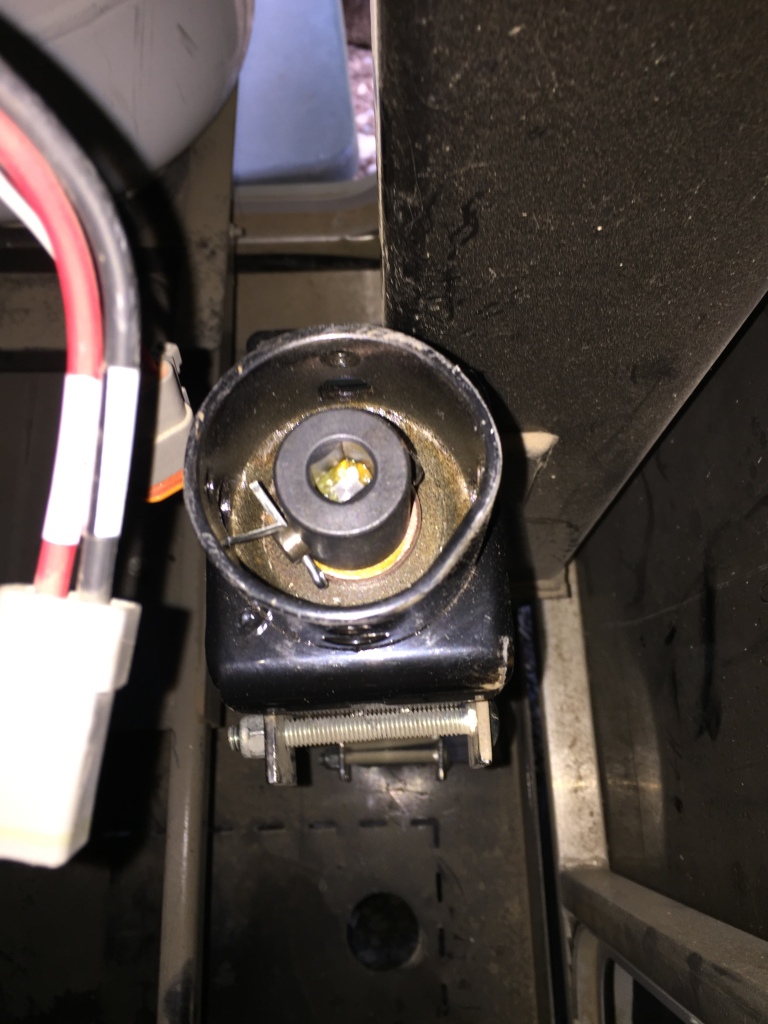 Once the motor was reattached I could lift the jack up and bolt it in. It’s held in place just by the friction of two brackets, which, again, is amazing to me.

Once everything was put back together and tightened down and the wiring harnesses were reconnected, it all worked just like it’s supposed to, with 100% less falling down. It still bothers me how high the front of the rig has to be in order for us to be level at this location, but there’s nothing we can do about it this year, maybe next year.