You never know what you are going to get up here at Timothy Lake, especially when Deb and Steve come to visit, and this week was no exception.  On Monday, Lee saw on Facebook that Deb and Steve were having some trouble with their site at a nearby state park, and since their site here was open, invited them to come up early.  Deb is one of the most badass chicks I have met on the road, but she has a thing about bees/wasps/hornets, and the site they were given had a huge yellowjacket nest in it.  Given the option of staying in the site or driving the additional two hours to us, they chose the latter and arrived in the late afternoon.  It took us a while to get them settled into their site, so we ended up having their arrival dinner close to 9pm, but no one cared since it was so great to have them here.

Steve is staying in one of the few spots here that has Verizon service, since he was working during the week, and we had to work the next day, but we were excited that we would have two sets of days off with them.  We made tentative plans for dinner Tuesday night, but Tuesday morning bright and early I got thrown another curve ball.  With no warning we had large planes dipping water out of the middle of the lake, and Lee and I were scurrying around trying to determine what the protocol was.  Through sheer bad luck our most experienced veteran was off property and I wasn’t quite sure what I was supposed to do.  There was a fire in the National Forest about 22 miles NE of us (as the crow flies), and it made sense that they would get water from the lake, and since it has been so dry they had 4 planes taking water to the fire.  The problem was I wasn’t initially sure who was supposed to clear the lake of small water craft and since the lake is pretty huge wasn’t quite sure how to do it.

Plane coming in with Mt. Hood in the background

I spent time on the phone trying to get some answers, but Lee just jumped into action.  He got our bull horn, connected with some Fire Service rangers who arrived on scene, and ultimately helped them clear the lake.  He loves using the bullhorn and hasn’t gotten to use it all summer, so he was into it, but I was more concerned about what my responsibilities were.  This is a huge lake with 5 major points of entry and since we are low on staff (and equipment to clear the lake), it was a bit confusing for both us and our camp hosts.  Eventually we got it all sorted out and I did find some time to watch the spectacle a little, and I must say it was a really cool show for us and Deb and Steve.  The flights went on for several hours and most of our campers sat on the beach and watched, with the little kids in particular really enjoying themselves. That night was a long one for us, but Deb made a lovely pasta dish and she was kind enough to pack some up and Lee devoured it at 8:30pm.

The next day we had more planes but things were a little slower and we were able to make some steak dinner for Deb and Steve and enjoy time around their propane fire.  The fire ban for the National Forest was finally started and after some initial confusion, basically they settled on anything with a shut-off valve being OK.  I’ve seen the “campfire in a can” at Quartzsite and other places, but didn’t really like them because they didn’t generate much heat and I thought they smelled bad.  Steve’s was totally different and I absolutely loved it.  We often find that we want a little fire, but don’t want to mess with starting one and I could see the benefits right away.  I liked it so much by the end of the first night, that I asked Lee to order me one for an early birthday present, and we will soon be the proud owners of a Bond Mfg 66603 Aurora Portable Gas Steel Fire Bowl, 18.5″, Black 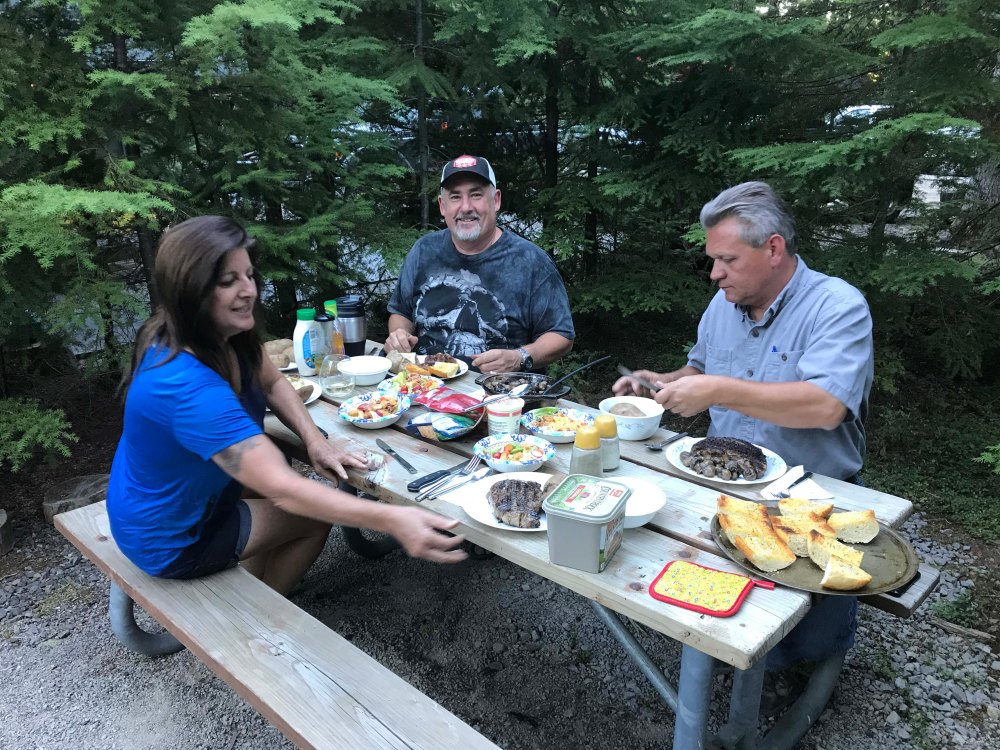 The next night Deb and Steve cooked, and they made a pork loin, smashed potatoes, and Brussels sprouts.  As I have mentioned, Deb is a fantastic cook, and since Lee loves brussel sprouts I had to get the recipe.  Unfortunately with Deb (who cooks by feel), it’s a little tough to nail down exactly how she does things, but I have gotten better with deciphering her descriptions.  Basically she cuts the sprouts in half, tosses in olive oil, salt, pepper, and Tuscan spices, and the broils them in the oven until they start to turn crispy.  Then she uses a spatula to move them around on the pan and cook some more, until there are lots of brown, crunchy flakes which are the best part.  Totally Lee approved!

I love watching Hurley with his “sticks” or really logs.  He’s being a good puppy and staying on leash while he is here since we have pretty strict leash rules.

Another night with a fire. I particularly like the holes in the sides, although ours actually has diamonds.

We knew we were going to have a busy weekend so we recommended a list of things for Steve and Deb to do and refocused ourselves on the jobs.  Being with good friends is great because they totally get that we are not on vacation, and Deb and Steve make their own fun wherever they go anyway.  They took several of our recommendations (and tried a few new things we haven’t done yet) and you can read all about it in her blog Down the Road. If you haven’t seen it you should definitely check it out, because it’s full of amazing hikes and lots of great restaurants.  Steve loves to eat (and drink) and Deb loves to hike, which works out to be a nice balance!

While they were doing the fun stuff, we had the hottest and busiest weekend to date.  Lee, in particular, is super busy with Day Use on the weekends and we were filled to the rafters Saturday and Sunday.  We also had an event scheduled for Saturday evening, which made for a long day for both of us but was a ton of fun.  Hunter Noack is a classical pianist, and for the past two years has done the In a Landscape concert series where he plays the piano out in nature.  The coolest part is they rent wireless headsets, so guests can wander in nature as they listen to music.  For us it was a bit of a challenge because our amphitheater is down near the lake and has a very narrow road to access it.  Hunter’s team needed to pull a trailer into the spot (with a grand piano mounted to it) and then they transform the trailer into a stage.  When I first got the email about the event, I was a bit perplexed, but then I remembered who I was married to.  Lee’s live event (and RVing experience) was perfect for this event, and he not only measured the entry but also personally directed the trailer in and out of the venue, which was no joke when they left in the dark,

It was a wonderful event with multiple musicians and since it was totally free (headsets were $10 but you didn’t have to rent them), our campers really enjoyed it. 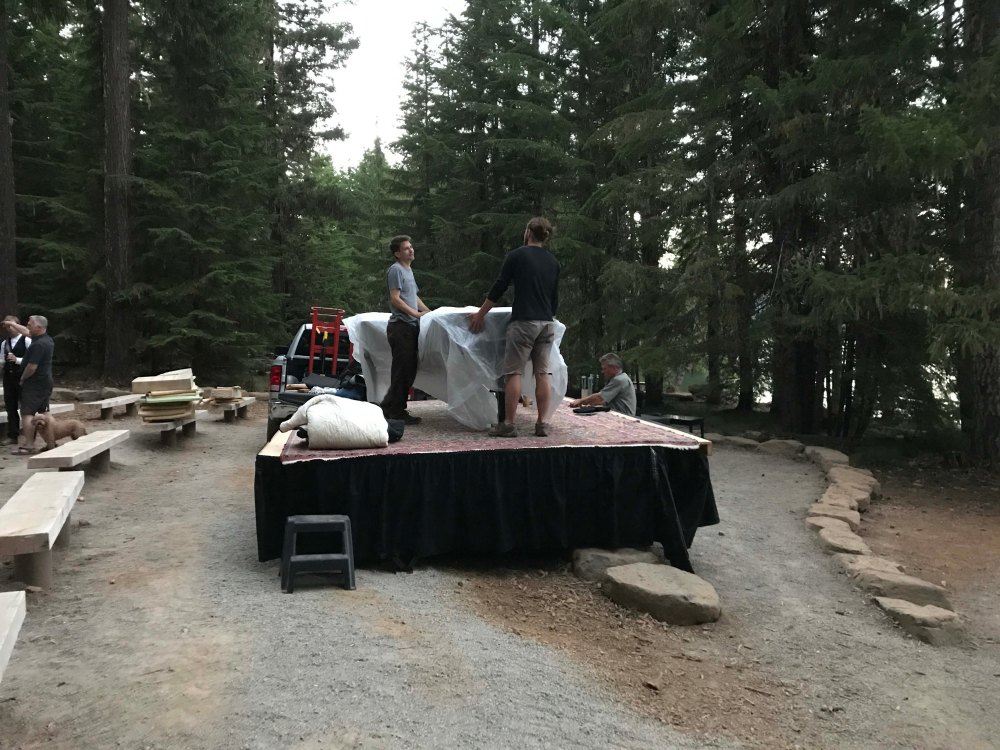 The piano on the trailer which was converted to a stage 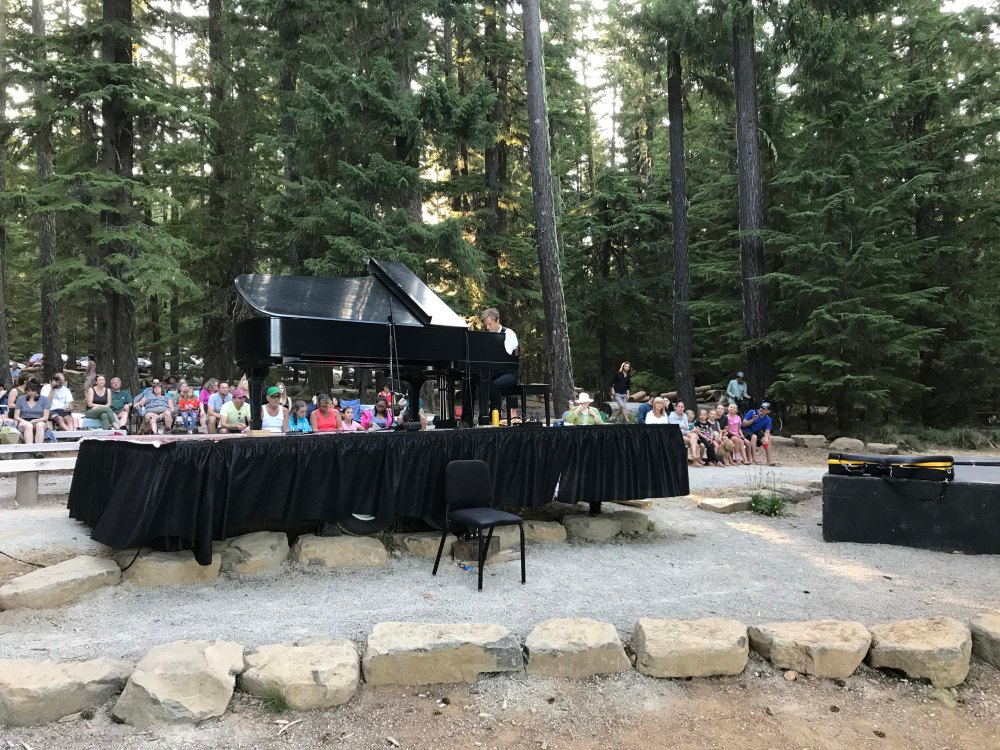 We had a nice crowd

I loved the classical guitar player

Although we were working the event, we were able to walk a bit with the headsets and the experience was very cool.  The combination of beautiful music in an amazing setting was really neat and if you ever have a chance to experience something like this I highly recommend it.  Here are some of the images I snapped while listening to Debussey’s Reflections in the Water.

I also loved that it was a family and dog friendly event, which with the headphones on really added to the experience.  The coordinator of the event brought her family and watching her two year old play while the music was in the distance was really lovely.  He had a wonderful time.

So, it was a very full weekend, but Lee’s 50th birthday is coming up, and thankfully Deb and Steve are here to celebrate with us.  Looking forward to doing some fun things with them on our days off!

2 thoughts on “Planes and Pianos”