For those of you who don’t like reading about bodily functions you probably want to skip this one, but for those who acknowledge that everybody poops, this is a detailed explanation of how Lee replaced our RV toilet. I mentioned in our last blog post that we were having some trouble with the valve in our toilet and that we had gone to Camping World to look at a possible replacement, but what I didn’t know during that trip was as soon as we arrived at our gate guarding position the valve would break and be stuck in the open position.  This meant that we couldn’t turn the water on in the rig at all, so it went from a future upgrade to an immediate need, which happens more often than I would like living in an RV.

Flush valve stuck in the open position, so you can see why we couldn’t turn the water on.

Add to that neither one of us had ever actually replaced a toilet, although Lee learned how to do it in RV Tech school and felt pretty confident that he could make the switch.  Thankfully we were only an hour away from a Camping World that had one in stock, so as soon as we got settled in Lee left and went to pick up the Revolution 320

that I had picked out the day before.  That was a bummer for me, because that meant I needed to stay awake until the job was done, but as I said, it was an immediate need so I just drank some coffee and watched the gate which was thankfully pretty slow.

The reason we didn’t buy the toilet initially was because we needed to make absolutely sure the measurements would work.  Lee had measured the height and width of the existing toilet, but since this one was 2″ deeper (from the drain hole to the wall behind) we needed to make sure we had the space.  I was pretty excited about the new model because it was made of porcelain instead of plastic, and feels much mor like a residential toilet.  I’ll admit it, I am not a fan of these plastic toilets, and after three years that feeling has gotten worse, not better.  Plus, they are pretty difficult to clean and the lack of a lip on the outside edge does lend itself to spattering. This toilet not only feels better, but also automatically puts a small amount of water in the bottom of the bowel after flushing which helps keep the seals from drying out, and cuts down on spatters.  I’ll let Lee explain the details of how he made the switch, but the whole thing went beautifully, and I am VERY happy.  What can I say, some things in life just matter, and if I knew the switch would have been this easy and would have made such a difference I would have done it a long time ago. It ended up costing $250 but I think it was worth every cent, and for those of you who know how cheap I can be about stuff like this, that is saying something!  Alright onto Lee’s description…

There’s actually not much to describe. It was probably the easiest RV related thing I’ve ever done. The most important thing if you’re going to do this is to make absolutely sure that the new toilet will fit in the space, and not interfere with anything else. In our particular case the big concern was the distance from the center of the drain hole to the wall behind. We were told that most toilets are 9″ on this dimension, but the one we wanted requires 11″.

Removing the old one was incredibly easy. I just turned off the water and disconnected the spin-on water fitting. Then took off the bolt covers and removed the two nuts that secure the toilet to the floor. Lift up and away, and it’s gone. Be careful how you tip it when you lift, whatever water is in the valve and inner hoses/pipe will leak out onto you. But it’s just clean water. 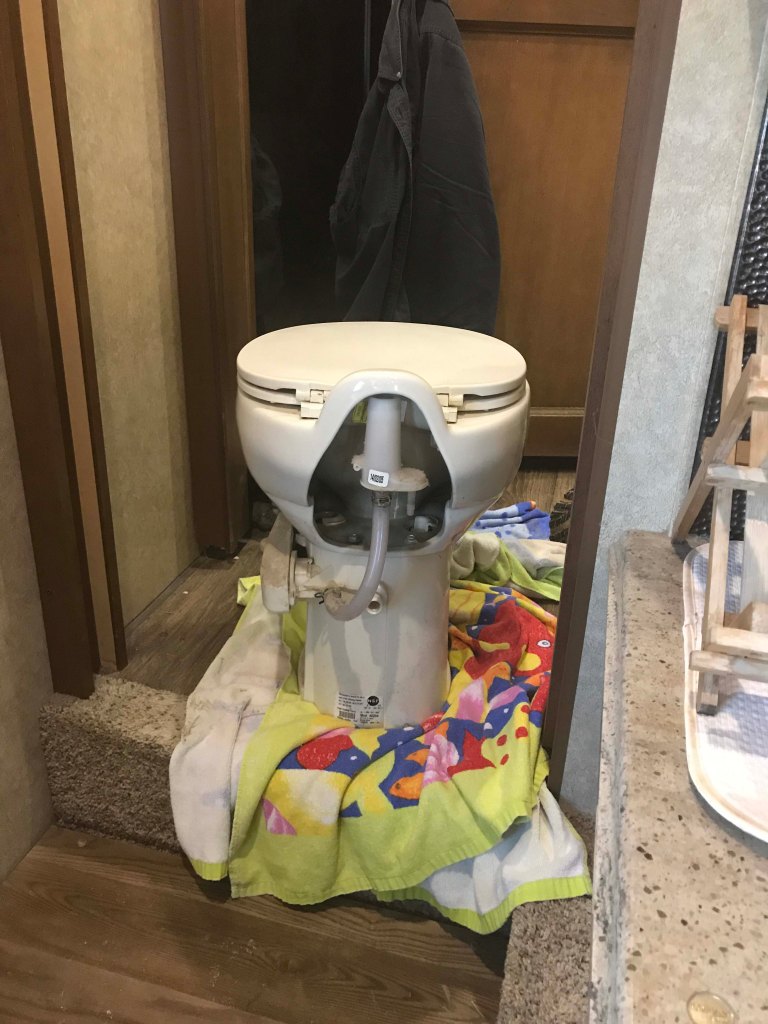 Have a towel handy to set it on.

I took advantage of having it out and thoroughly cleaned the floor and wall around it, which can be hard to get to with a toilet in the way. I really appreciated this.  That’s my guy, he always does the complete job. – Trace

I cleaned the mounting flange, which is the large black disc in the photo above, and checked to make sure all the screws were solid and tight. This is a flat round disc that is attached to the floor,  and the toilet attaches to it, so it’s good to be sure it’s well secured. Technically there should be eight screws in it, but four are also OK.

Next I put in the new T bolts that came with the new toilet, and carefully lowered the toilet onto them. I checked to make sure it was lined up properly and put on the included washers and the nuts, and tightened them down. A ratcheting wrench works really well for this, because there’s not enough clearance to get a socket over the nut. You have to be careful not to over tighten, because while the bowl is ceramic, the base is plastic, and you don’t want to crack it. You also want to alternate sides as you tighten them to keep everything even.

Then I covered the tops of the T-bolts with the covers, and reattached the water line. I turned on the water and did a seal test, and everything was just fine, no leaks inside or out. The original toilet had a center water fitting, and this one has an offset, but there was enough slack in the pex line to pull it up a few inches to make the angle. One of the problem we had that caused us to do all of this was that when the valve failed it would just run and run. The first time it happened I was sitting outside while Trace slept and I heard water hitting the ground. The valve had stuck open and filled the bowl, and then overflowed. Luckily I was there and able to turn off the water, and the valve “unstuck”. The second time it happened I was standing in the bathroom and couldn’t get the valve to close, so I was able to just turn off the water. But that meant that we had no water unless we popped the Johnny Chock in so the water could run down the drain. So the next thing I will be doing is putting an inline shutoff valve between the floor and the toilet fitting, so if I ever need to I can turn off the water to just the toilet. I will probably go ahead and do the same thing to the hot and cold on the sinks and shower while I’m at it, which will give me peace of mind and the ability to continue to use water in the rig if we have another failure and we aren’t close enough to get a replacement part right away.I would have done it at the same time, but I couldn’t lay my hands on a 1/2″ to 1/2″ inline valve. Apparently, they’re uncommon. 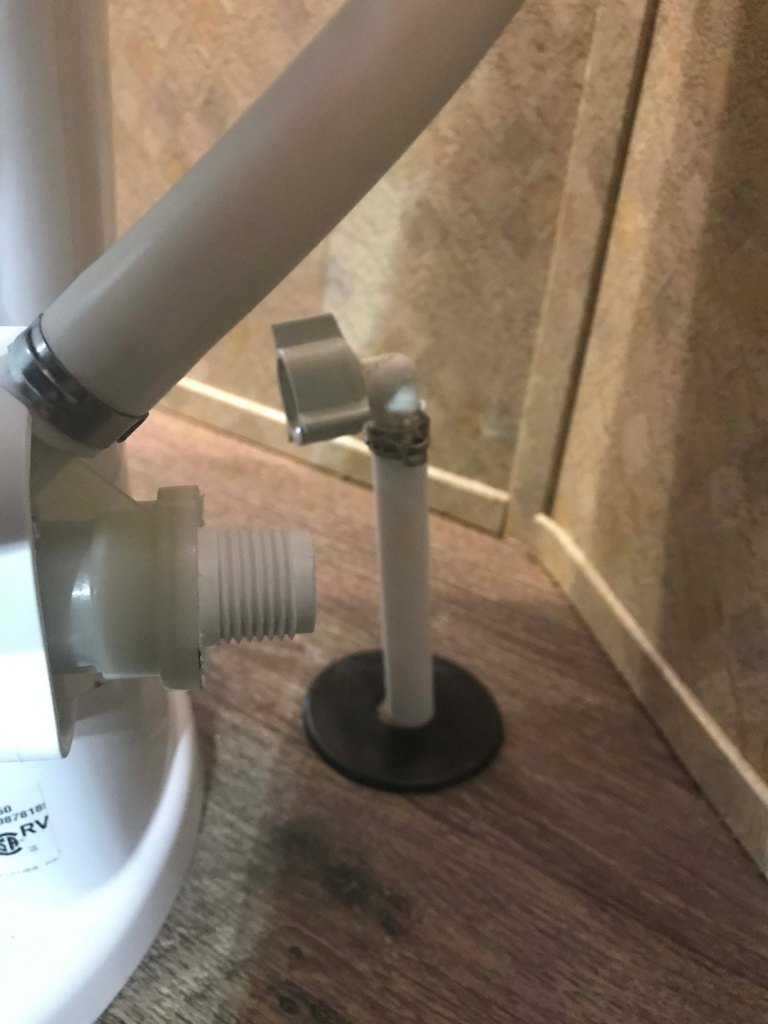 I also double checked the seat, and it was a little loose, so I tightened that up with a large screwdriver while holding the plastic nut underneath.

It’s Tracy again.  Once that was done we tested it.  We decided to use the internal water supply so I stood at the panel while Lee stayed with the toilet.  We ran water and everything worked fine and we were both pleased to see that after every flush a small amount of water comes into the bowl which helps keep the seals from drying out and to keep the bowl clean.

So here it is, in all it’s glory and again we couldn’t be more pleased.  I love the extra height, how it feels, and no more splatter because it has a lip!  We may seem a little too excited, but if you think about it, a toilet is something you use every day.  Why shouldn’t that be something to care about?  Plus I used the new toilet as an excuse to get some new bathroom accessories.  I kept the toilet paper holder, but the rug, toilet brush, and trashcan are new! 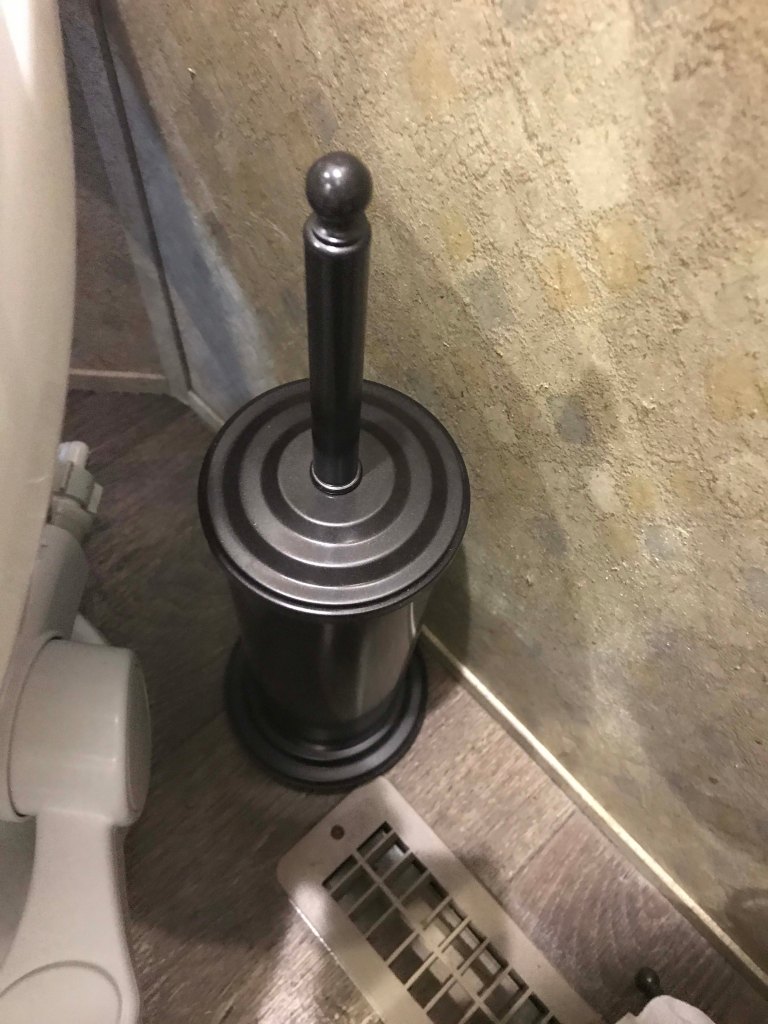 New toilet brush.  I made sure it was heavy and had a wide base so it wouldn’t just flip over when we travel.

And the rug, which I obsessed over. Ended up getting a 100% cotton one because I was concerned the memory foam ones wouldn’t wash in our Splendide.

So if you are not feeling your old toilet…pun intended…don’t be afraid to put in a new one.  Just make sure you take good measurements prior to making your purchase, because once the toilet is removed from the packaging you cannot return it according to Camping World.