We left Roswell and headed across New Mexico towards the Very Large Array on HWY 380.  Highway 380 is also known as Billy the Kid highway and traverses Lincoln County which is the territory of Billy the Kid.  It also passes through Lincoln, New Mexico which is an extremely old town that he was captured, taken to, and escaped from.  Neither one of us was that interested but the town was super old and there were numerous historical locations that people stopped at.  We were interested in the lava fields though.  Crossing route 380 is a huge lava flow that the land is slowly reclaiming,  There was a scenic view and we pulled over and walked out on the rocks a bit.  Neither one of us had ever seen anything quite like it, as it looks like a giant black river frozen in place.  I would have loved to explore a bit more, but you have to watch your time on these side trips or you end up pulling into your campground at night. 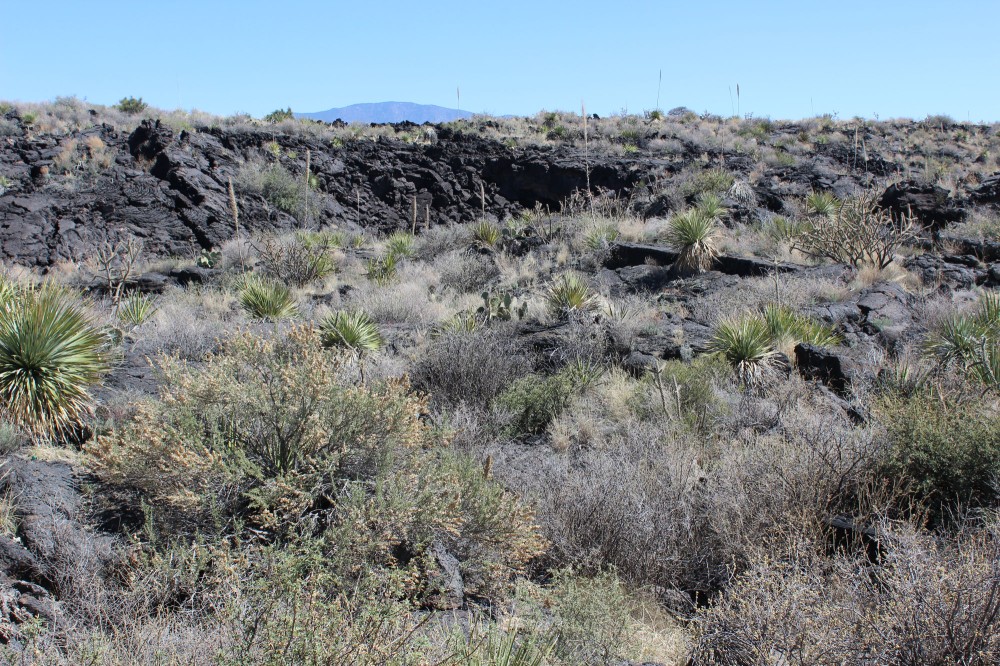 Another thing on the drive we were interested in was the Smokey the Bear Historical Park!  I was a Smokey the Bear fan as a small child (I mean really, who wasn’t?) and thought if possible it would be a fun stop.  This desire was heightened when we stopped at a small rest area for lunch and saw the place where Smokey was found. 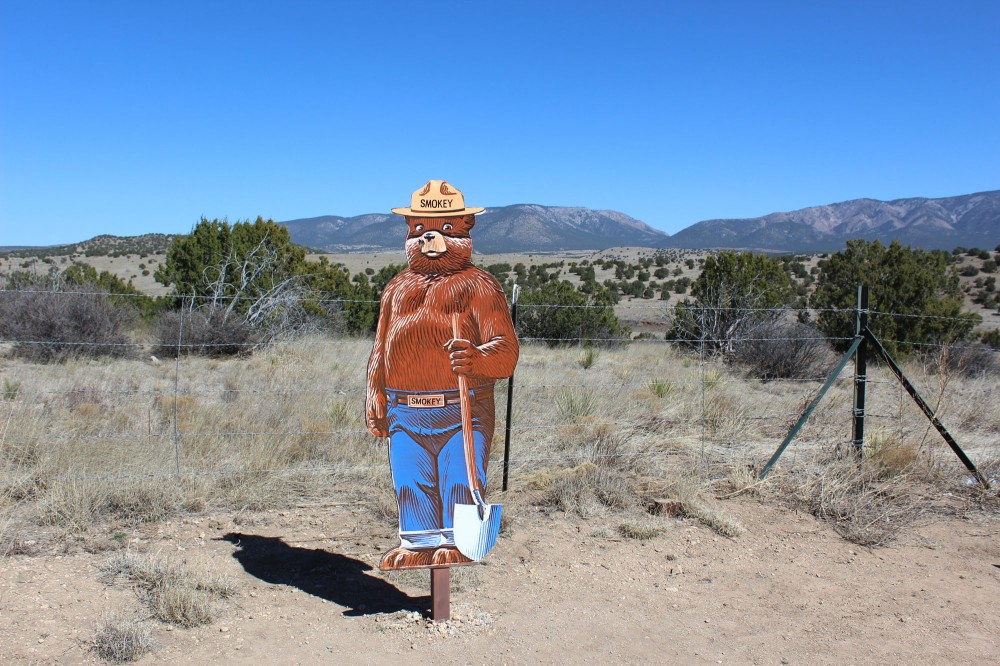 Smokey did exist as a cartoon character created during WWII to help the war effort preserve timber.  In the early 50’s though the cartoon character became a real bear when the bear cub was rescued.  He was flown to Washington D.C., met the president, and was installed in the National Zoo where he lived a 26 year long bear life.  The neat part of the story is when he died he was sent back to the town of Capitan who created the burial site and historic park for him.  The whole small town now has a Smokey The Bear theme, but for $2 we thought we couldn’t go wrong seeing the park.  Actually it was pretty cool, with a nice 10 minute movie and lots of old posters and memorabilia.  The outside park itself was small and could use some updating, but I did like the grave site.  Finally we went next door and saw the gift shop, where unfortunately things were crazy expensive.  Still glad we did it and it only took 45 minutes or so to see it, which was more than a fair trade.

The historical park. We parked in parallel out front btw as it was a slow day

Smokey as a cub and grown bear

Didn’t know this, but many other countries picked up the Smokey idea and have their own programs. Australia uses the Koala 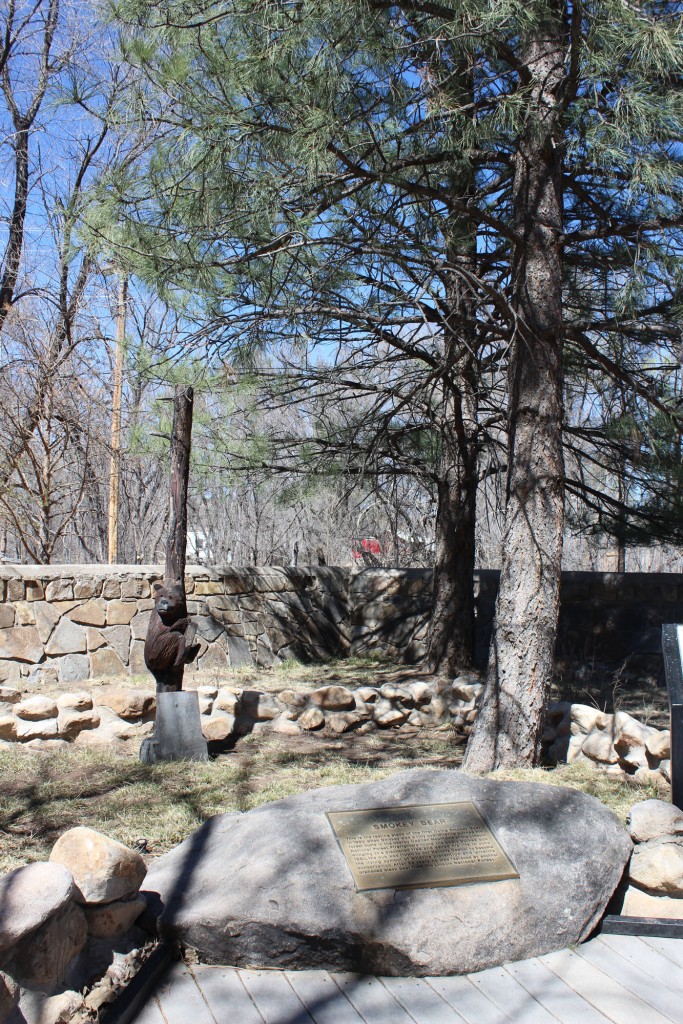 The gravesite, which was dug at 3am so the body wouldn’t be stolen. Weird for the 70’s but apparently that was a real concern

Next we hit the town of Socorro, which is over 400 years old and was a Spanish missionary city.  Again, not a lot of interest on our part, but if you are interested in old Spanish Missions this is probably a place you would want to check out.  It was starting to get a little late but we were excited to see The Very Large Array (VLA) along our path. Knowing we were spending Friday there we didn’t stop, but I did take a couple of quick shots from the window.  We were a little awestruck by the huge white dishes in the middle of nowhere.  I won’t get into to much detail at this point, but here’s a sneak peek with the view we saw.

Looks smaller from the road than in the movies, but still pretty amazing

Many more miles down the road we finally arrived at Jackson Field our free campsite in Pie Town.  As you probably know by now, Lee loves pie, so when searching for a campsite near the VLA we decided to try this place out.  There aren’t lots of options close by, and free plus pie equals sold for us.  The dirt road leading back to the sites was very soft (absolutely would not try this in a big rig if rain was expected) and the sites themselves were not clearly marked.  Luckily a very nice man who was living there helped us find a spot and it turned out to be OK.  We had no ATT and only 1 sliver of 3G Verizon, but the fields were full of deer and other animals we saw tracks for but didn’t see.  Lee loved it for the wildness, I was a little nervous about animal activity but for a couple of free nights wasn’t bad.  I will say if we went back to the area though I would definitely stay at Datil Wells BLM campground which was $5 a night and much better kept.  The biggest disappointment was the Pie-O-Neer store in Pie Town.  It was a beautiful little store with a great story, but the pies were $29.95 each!! Even Lee wouldn’t spend that kind of money on a regularly sized pie and shame on them for charging such a ridiculous amount of money for a pie.

Our campsite at Jackson Field.  Lots of free firewood lying around

A big piece of bone near our fire ring

The overgrown baseball field we were up against 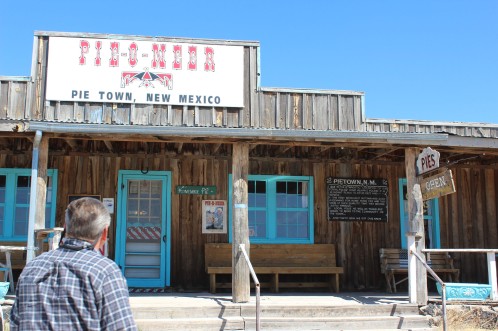 Inside was super cool

Pie aside though we were more than ready to see the VLA.  I haven’t seen Lee this excited in a while so we got up bright and early and headed that way.  It’s a little confusing how you actually get back there, but follow the signs and about 4 miles off the road there you are.  It only cost $6 per person to get in and that includes a really good 20 minute movie (narrated by Jodie Foster), some informational material, and an outside self guided tour.  It’s really all about seeing the antennas close up though and in that case it did not disappoint. Oh and did I mention that we saw Elk along the way?  Since we got up so early we saw tons of them including a buck with a large rack that I unfortunately did not get a picture of. 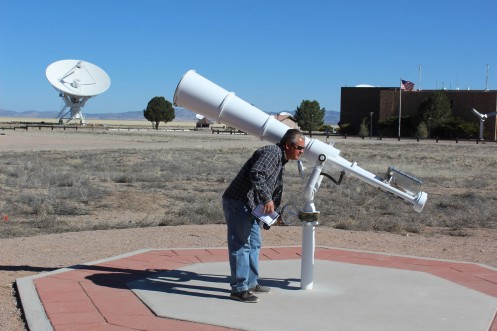 The beginning of the walking tour

The time was right

Lee was obviously having a good time 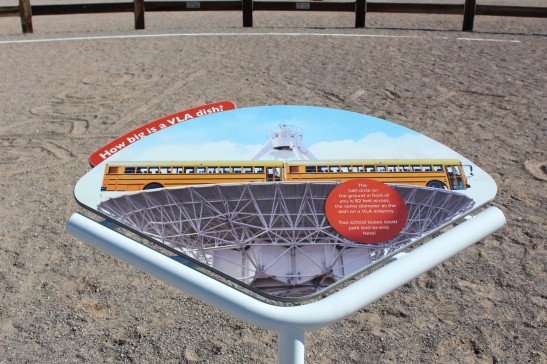 This sign shows how big the dishes are. Two school buses could fit across their width

We were able to walk right up to this one

Underside.  See the stairs?  Guys walk up there and using harnesses work inside them 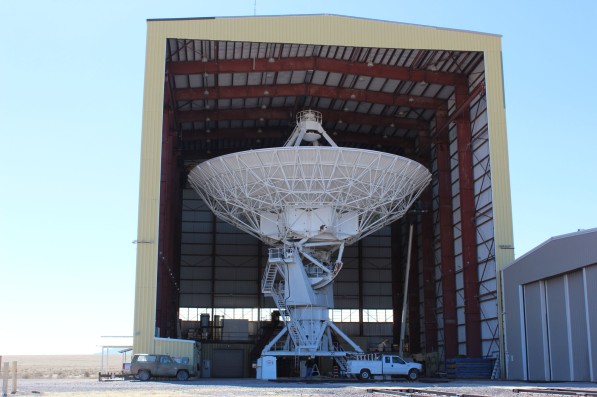 They are currently in a tightly clustered formation, but they can also be moved into a loose configuration and be very far from each other

They collect radio waves (which tell jus a lot about black holes) and are located in no where New Mexico because there is minimal earth noise to wade through.

This really helps you see how they are all parts of one very big machine.  You can see the RR track running beside them

And we both loved the cows that graze freely on the land. They’ve even lined up like the dishes for us (Lee’s pic)

It was a really terrific experience and I highly recommend making a side trip to spend part of a day here.  It doesn’t look like the movie Contact (which was digitally enhanced to add extra antennas), but it is awesome in its own right. Next up, Santa Fe!!