Before I start this blog post, I want to take a minute and thank everyone who has read the blog.  We just reached 100,000 hits, which is amazing to me.  Such a nice feeling to know that what I am writing is getting read and thanks so very much for making that happen!!

We left on Tuesday from the City of Rocks and headed toward Roswell, NM.  For the first time ever I think we will be staying two days in a location, moving on then another two days.  We were both pretty excited about Roswell, because it’s an area of the country we have both been hearing about since we were kids.  We are pretty fond of City/County parks and Lee found a small city park called Lake Van Recreation Area in a small town called Dexter about 10 miles south of Roswell.  It turned out to be a very interesting park.  Some enterprising soul took a gravel parking lot along the edge of the park and put in full hookups.  Can’t beat the price at $15 a night, but it is a very unusual park.  Lots of people use the park during the day and at night there is some traffic because you are next to a neighborhood road.  I didn’t feel unsafe so much as exposed, but since it’s only for a couple of nights no big deal. Oh and just so you know this park is in the middle of dairy country and when the wind is right the cow manure smell is pretty strong.  I grew up near a farm so the smell doesn’t bother me that much, but you should know in case you stay here.  The coolest part was real grass with lots and lots of birds who were all in a mating frenzy.  I saw lots of ducks and geese but couldn’t identify several of them.  Possibly because they were domestic?  Not sure. 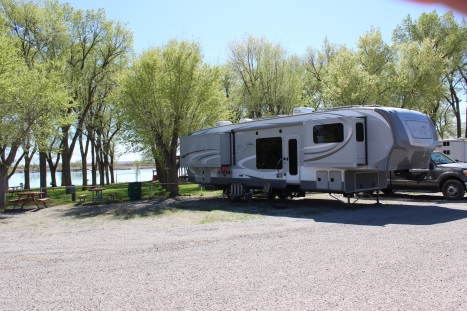 The view across the street

Never seen a water hookup like this before, but it works 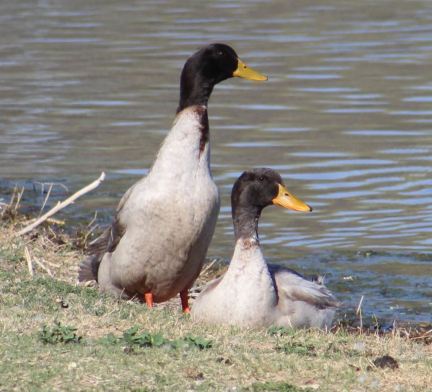 Nesting ducks  (update: Jim a friend of mine actually said these are two male ducks…so not nesting lol)

I think these are snow geese 🙂  (Update:  Nope they are domestic geese.  thanks Jim!!)

After having a cleaning frenzy and a super long shower, I got a great night’s sleep.  Then we got up on Wednesday and headed into Roswell. Now before I start this post I should probably clarify where I stand on the whole alien thing.  I completely believe there is other intelligent life in the universe.  Mathematically it is extremely probable and from a spiritual perspective I see no conflict with there being other beings in the universe.  On the other hand, I find it unlikely we have been visited and the government knows about it.  If we were, I would hope they would be spending a lot more money on our space program.  Then again who knows, and as I am picturing a possible future president Donald Trump negotiating with alien visitors I think that it is probably a good thing no one has stopped by yet. 🙂  All that being said, I was really walking into the experience with an open mind and interested in seeing the evidence. I also really wanted to eat at the UFO diner. 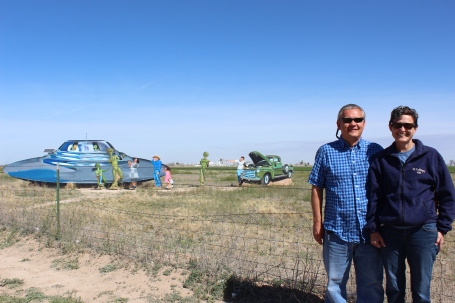 Had to stop outside of town for this picture

I had this picture in my head of a quaint little town with lots of UFO stuff in it so I didn’t do any research at all.  Well, it turns out Roswell is the fifth largest city in New Mexico and a perfectly nice little town.  There is a sprinkling of alien references on main street, but mainly it’s just a town.  The UFO diner closed down so we had to settle for Red Lobster, which turned out to be a wonderful lunch since I have had a huge crab legs craving for days.  It’s wasn’t my UFO diner experience, but wow it was good.

Next we drove downtown to check out the International UFO Museum.  It was only $5 to get in and there was a line out the door the entire time we were there.  I think it’s spring break here because there were tons of kids checking it out and even though it didn’t look like much I was hoping to be pleasantly surprised.  It started out OK, with a timeline of Roswell events and lots of information and affidavits.  It was credibly documented that something unusual did crash on the site and the government said it was a weather balloon to cover it up, so I was interested.  Then it got pretty hinky.  There was tons of second hand witness documentation, especially around the 4 bodies supposedly found there, but it just got wilder and wilder.  I found myself getting somewhat offended by the whole thing but hung in there until I got into the back and saw the big alien display.  I get it, they are trying to appeal to kids, but there is an intellectual argument to be made for alien life and despite the tons of documentation they really missed the mark in a big way.  Even the library which looks like tons of information, was largely magazine copies and some collections from UFO believers. Anyways, I was super disappointed in the whole thing.

Should have known from the lobby

Line out the door 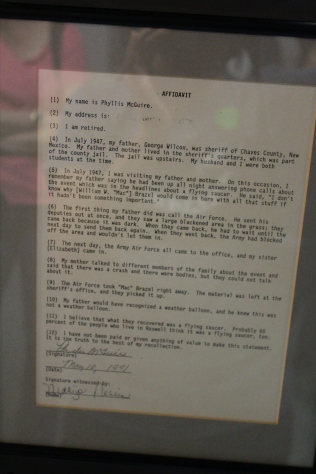 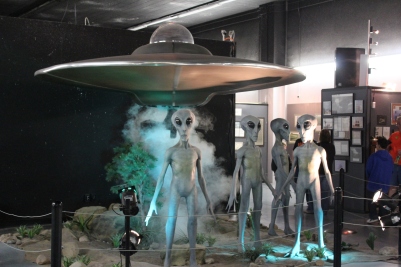 The UFO exhibit in the back. Occasionally it blows smoke

This library has lots of UFO related titles 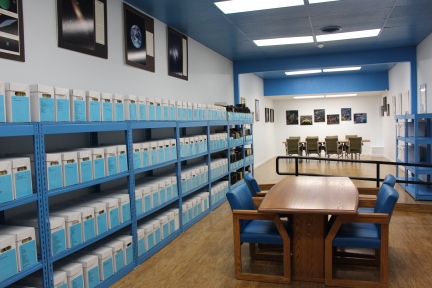 It does have some government materials that were interesting 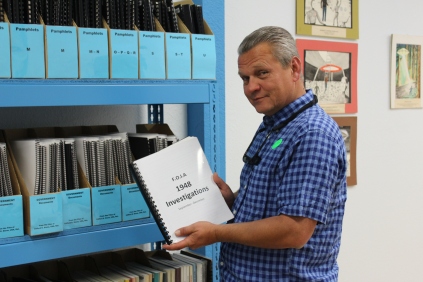 Lee checking some out 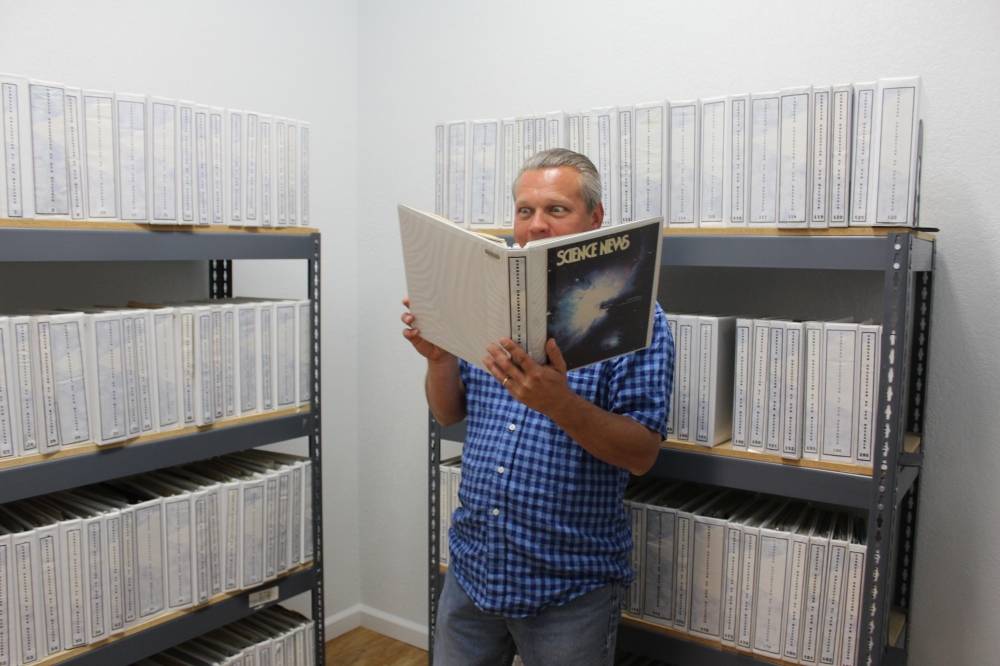 So the museum was a bust but thankfully my friend Deb reminded me about the Tree sculpture at the Roswell Public library. The tree was a community project where people of all ages submitted words, authors names, or snippets of books and they created tiles to create a beautiful tree bench.  The leaves are even inspirational words and it was truly lovely.  It really saved our sight-seeing day, but I would have to say unless you are passing through Roswell on your way to somewhere else I wouldn’t make a special stop here.  Next we are on to Pie Town though and anyone who knows Lee knows how much he loves his pie.  An entire town devoted to pie, well I may never get him to leave. 🙂 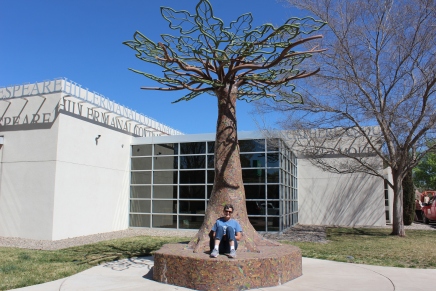 The tiles were amazing

11 thoughts on “First Time in Roswell”