The day after White Sands,  Lee and I made the trip into Las Cruces (two hours away) to the nearest Staples and Best Buy to look at laptops.  When I turned in my company laptop back in November I started to use an older one we had, but it’s been very slow and never really felt like “my laptop”.  So I was using our main computer for pictures and blogging and squeezing it in when I could around Lee’s video work.  When Lee started adding small videos to the blog posts we kept running into each other with needing the computer and this led to some conflict.  So we sat down and talked about it and my stance was to just buy a laptop.  In a role reversal, Lee wanted to be careful we weren’t just throwing money at a problem instead of solving it, so we sat down and really talked it through.  Ultimately we decided to go ahead and buy it (I think my point is that if we were in our 30’s we wouldn’t even be having this conversation) and we made the long drive into town.

This area has three cities in it; Silver City which is north of us and known for being a home for Billy the Kid and having the largest open pit copper mine in the word; Deming which is south of us and has numerous RV parks and the best laundromat Lee has used since being on the road, and finally Las Cruces, which has all the major stores like Target, Best Buy etc. and is close to the border.  To be honest I don’t particularly care for any of them.  This part of the country seems to be economically depressed and the towns are showing it.  I do appreciate that they all have Walmart with excellent selections and prices, but other than that there is not much to recommend any of them.  (As a side note Cori really likes historic Silver City which does have a funky vibe and she found a pizza place there that tastes like her Philly pizza so she’s pretty happy.)  Anyway, we went to Staples first and then Best Buy and I ended up finding a very nice computer HP 15-AC163NR

for $399. You may be wondering why we made the drive and just didn’t order it online and the argument is similar to the one I made for trying my new hiking shoes on at an REI. How the screen looks and the mechanics of typing are very individual experiences and Lee was absolutely correct in insisting we go look in person.  I tried out over 10 of them between the two stores and there were absolutely models of computers I did not like at all.  And since Staples had price match going on for other retail establishments I knew we were getting the best retail price we could. Yes, I could have then taken the model number and gone home and ordered online and saved a few bucks, but in a case where I am working with a salesperson, I don’t personally feel right about that.  I’m just old school that way.

When we got back to the camper the day was beautiful.  No wind and we all ate outside, watched a beautiful sunset, had a fire, and listened to what I believe was a very active mating ritual by a couple of owls.  Really lovely and I was excited about getting up the next day and really exploring the campground. 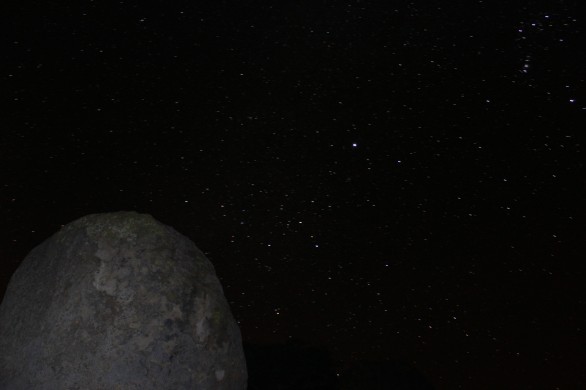 Lee took a couple night shots of the stars for me. There are so many!

Unfortunately the next day was cold and windy, and the next, and the next.  When I say windy by the way I don’t mean a light breeze.  It was full on, push you off balance wind with tons of grit in it.  Going outside was unpleasant and there were no fires or eating outside.  Since our rig isn’t set up very well for guests we ate and hung out at Cori and Greg’s.  The days were spent getting the new laptop going, catching up on blogging and other emails, and puttering. And after a couple of days I started to get really antsy.  It was so bright and sunny outside, but every time I walked outside to test the wind (or smoke) it was not pleasant. So here I was in what most people who know me would think is the perfect place on earth for me and I wasn’t happy.  Generally when we have bad weather we do things in the area that are inside, but there really isn’t much to do here inside in a two hour radius. So I started getting cranky about the whole thing.  Turns out March here is generally windy and those big open copper mines I talked about throw lots of sand and grit into the air.  Plus the campground lies smack dab in the middle of a huge plain and wind comes from a long way away before it hits here. I actually thought about just packing up and moving on, but since we pre-paid (no refunds) and Cori and Greg were here and heading back to Tuscon when we were done I just stuck it out.  I did force myself out on one day for a couple of hours to take some pictures and although they were amazing the conditions they were taken in not so much.

Indian Mill grinding stones in the park were very cool. I can imagine plains Indians coming here to grind their corn

The eroded sections of the rock were very neat in places

One of my favorite formations. Looked like a sea monster to me with the head on the right and the curled up  tail on the left

Beautiful right?  And I have been back and forth in my head on how to talk about the experience.  It’s tempting to let the pictures stand as they are and not talk about anything unpleasant.  You can’t see the wind or the fact that I snuck these pictures in during very short walks because the winds drove me back inside. Plus if you are a hardier sort of person than me you might laugh off the wind as nothing or even enjoy it.  But after some soul searching I realized I couldn’t just let the pictures stand without the rest of the story.  The company was great, the campsites are perfect, but I am not going to be in a big hurry to come back here.  And it’s sad for me because I have been wanting to see this place since before we went on the road.  And I am sure for those of you just trying to get through the winter a big boo hoo for me.  But after a year of being on the road I get to be a little more selective.  There is still magic and wonder in new places, but the realities of weather, internet connection, surrounding area, services etc, do factor in.  As we often talk about this is life not vacation and for me the area is not so great for living my particular life.  Now all that being said, you should definitely come here at least once and hopefully you will absolutely love it. Just please realize that there is always more to the story than the pretty pictures. 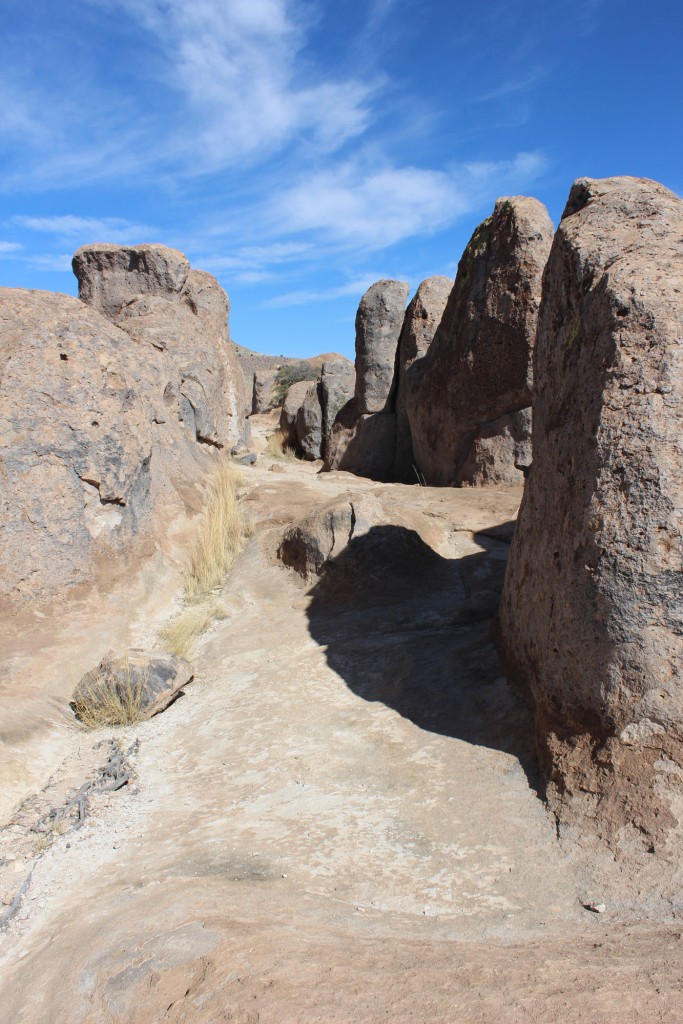 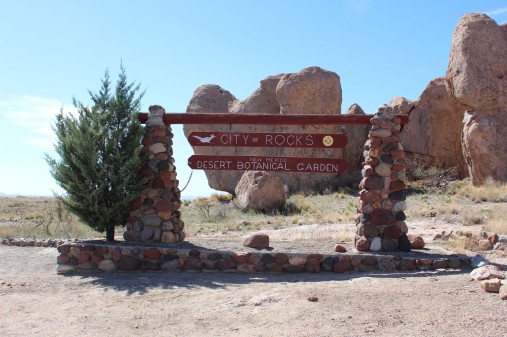 The sign was nice but the garden was kind of lame.  Has tons of potential though

This is a mesquite tree btw 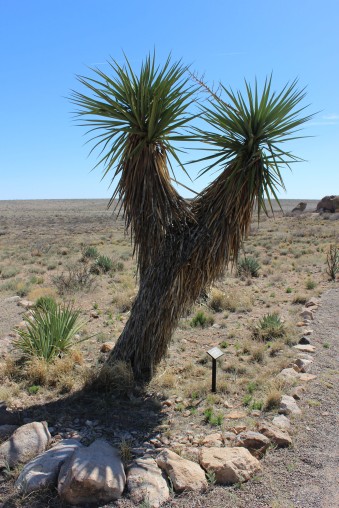 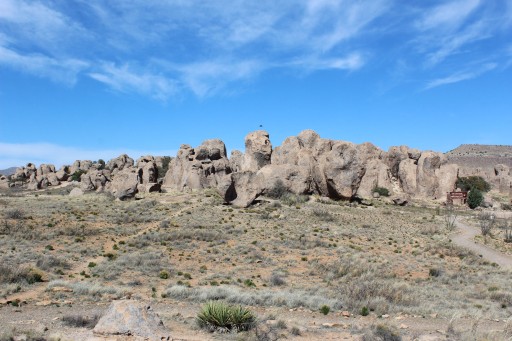 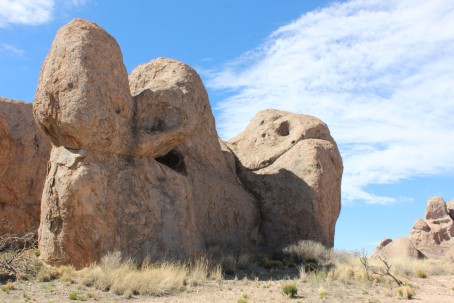 Another “sea monster” with the eye and mouth to the right 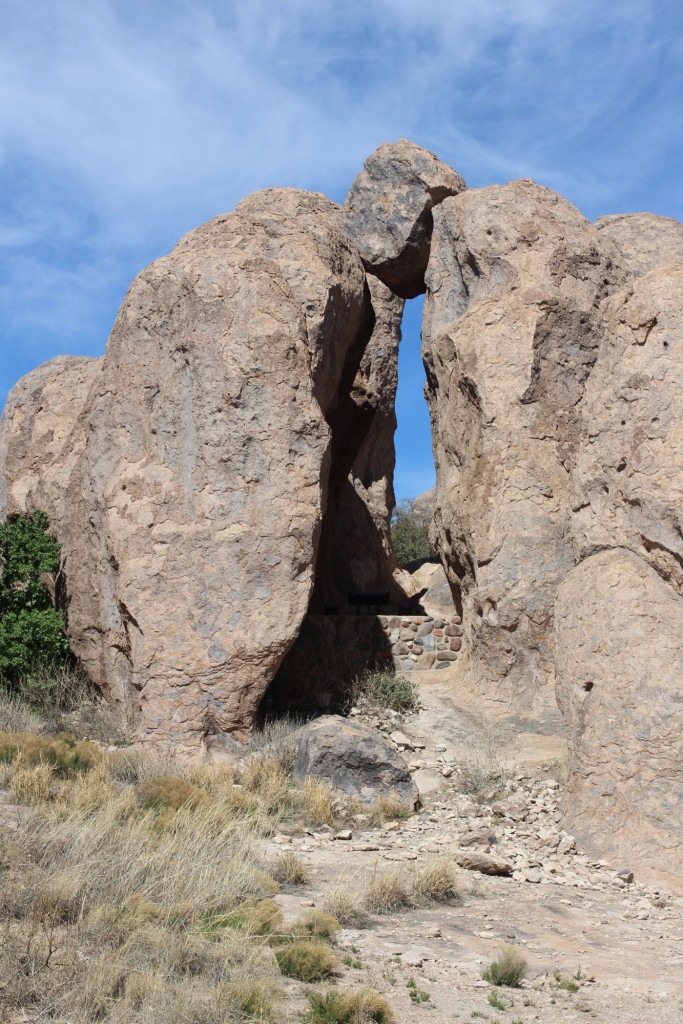 On the first few days the wind was pretty light so Lee was able to get some drone footage of the campground.

On Monday (our last day), we all decided to get out a bit and try nearby Rock Hound State Park.  Well to be honest Cori pushed for it.  I think she was tired of me feeling sorry for myself (which was fair) and off we went to try another park.  It was still windy, but a little warmer and it was nice to get out for some different views.  Rock Hound State Park has its own campground and allows people to take up to 10 pounds of loose rock away.  I love rocks, but am woefully uneducated about what is what, but we walked up the path and took some nice shots of the vista and I did pick up a view rocks that were pretty.  Then we drove to the Spring Canyon day use area which was 2 miles away and that was spectacular.  Both places had a $5 day use fee but we didn’t pay them in either case because we were paying for our campground nearby.  Use your own judgement on this, but I don’t know that either would be worth $5 a person although Spring Canyon has a very difficult hike to try and the picnic area was fantastic. 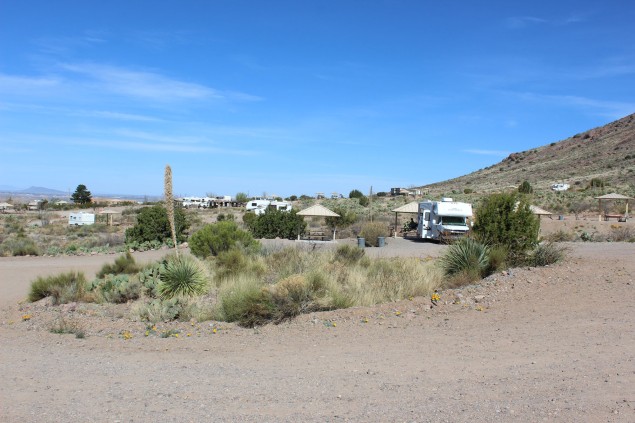 Some flowers were blooming which was beautiful 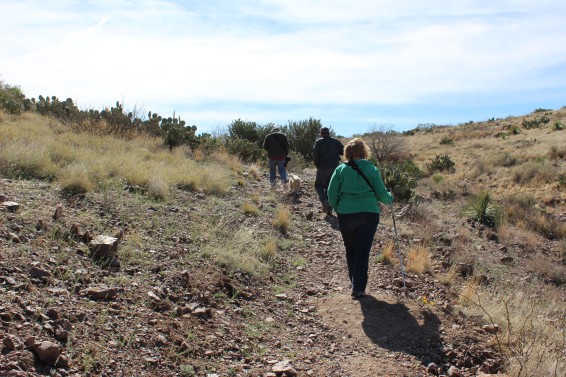 We walked up a 1/2 mile trail for some views. Lots of loose rock but pretty level 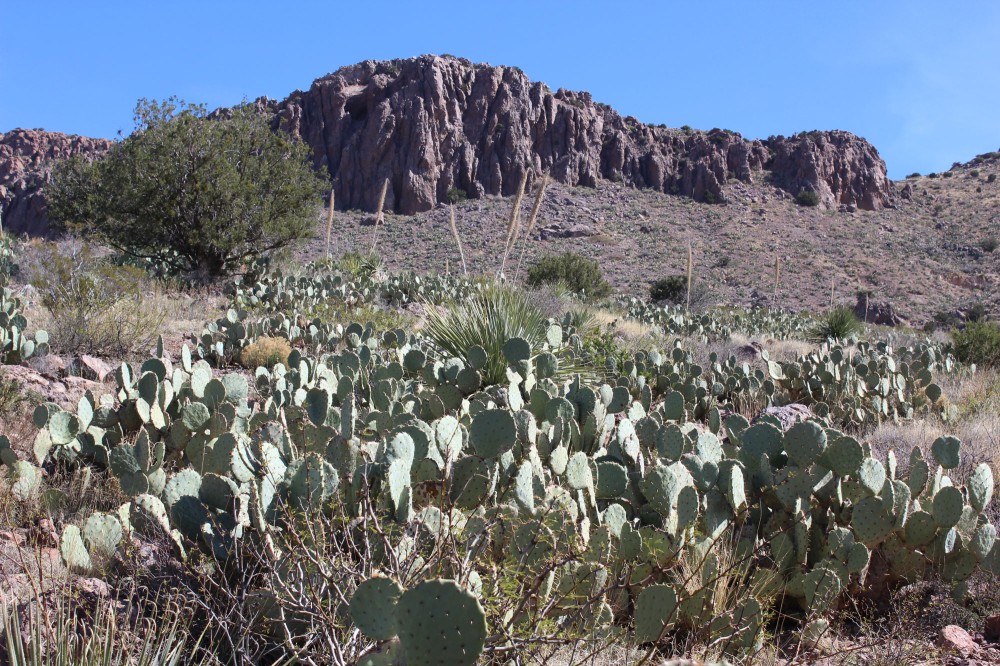 The surrounding mountains and cacti were great 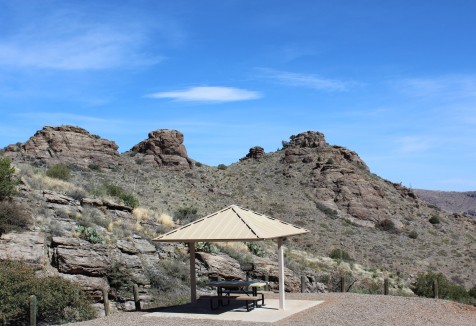 It led up to this peak 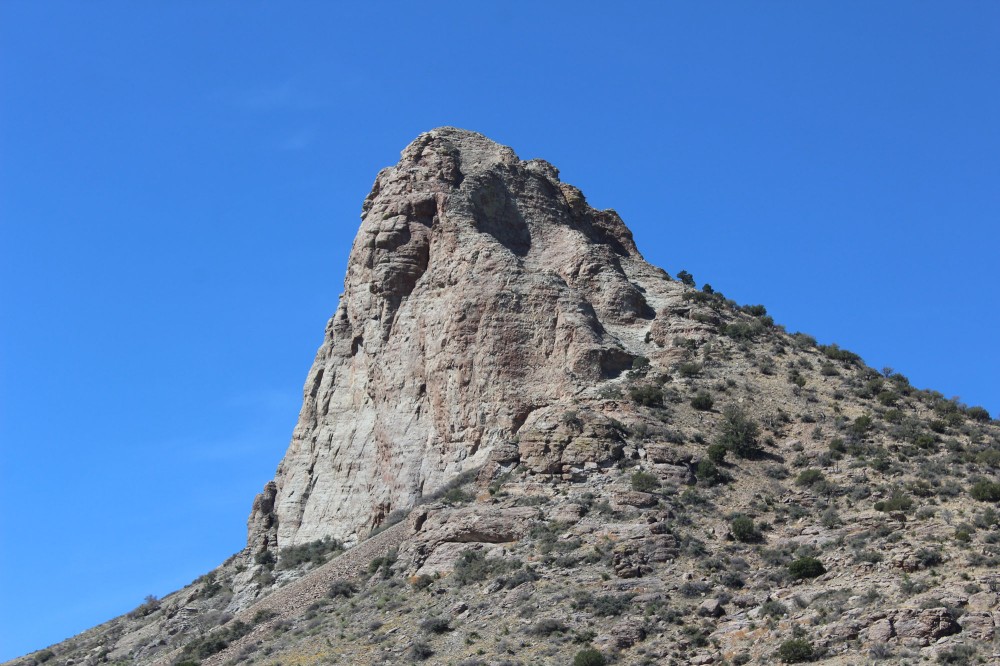 A different view, was really majestic

Afterwards we stopped at Spanish Stirrup Rock Shop and looked at their wares.  They had tons of bins outside for reasonable prices and then the nicer pieces inside. I bought a rock magnet for $2 to commemorate our stay in the area. 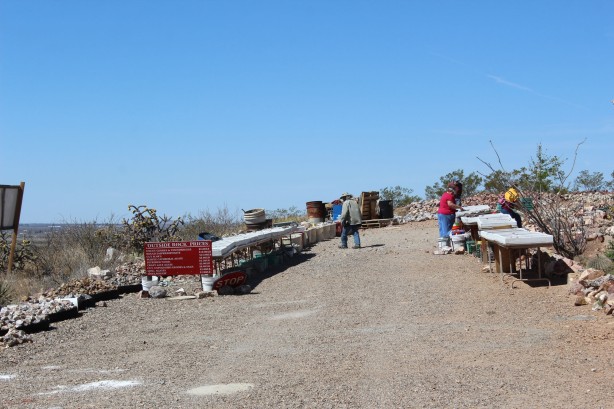 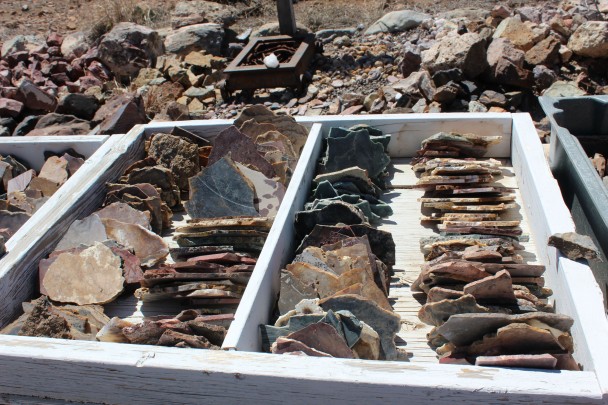 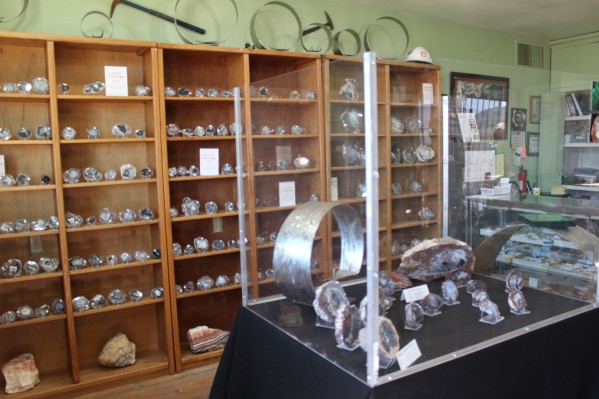 Then we went to Benji’s in Deming for Mexican which was very good and stopped at Wal-Mart to pick up a few things for dinner.  Finally Lee and I stopped at the Diaz Family Farm stand and bought some onions and tomatoes.  They had bags and bags of roasted chili peppers there for $2, but as much as I love getting local produce I just don’t cook with chili peppers.  The kid working there was super nice though and told us June – August are the nicest time of year in the area.  He also said it was on the windy side, but it does get windy in March.  When we got back Cori and Greg fixed a great fish dinner and we sat and talked for awhile.  It’s the first time we will be leaving each other with no firm plans to meet up in the future and it’s kind of sad.  We had a wonderful time with them, traveled very well together, and of course I adore their puppy Hobie. There is not a doubt in my mind though that they will continue to be a big part of our full-timing life it just may be awhile until we are in the same place again.  So it is bittersweet that we are moving on.  Excited to see some of the rest of New Mexico (and hopefully escape the wind), but sad that they won’t be with us.  Safe travels my friends.

14 thoughts on “Exploring the City of Rocks and Surrounding Area”