A few weeks ago someone asked a question on the RV-Dreams Forum  about what our biggest fears were before we started full timing, and how we worked through those fears.  It was a good question and got me thinking about how much less fear I have in my life now than a year ago.  So many things I was absolutely terrified of have been resolved or gone away.

Those were the big ones.  There were lots and lots of little ones of course, but they mainly fall into one of these categories.  And overall I feel like I am doing well.  I’ve changed more in these areas in the last two years than in the 25 previous. I know what I need to work on and am getting pretty good at noticing the triggers and talking about them proactively rather than reacting to them.  So why write about this now?  Well today God/Universe hit me with three stressful situations, all in a one hour period, and I didn’t do so well.   So I thought it was probably time to write about all of this, because if not now, when it’s fresh then seriously, when?  But first let me back up a bit.

We left early Saturday morning for Lake Cochiti (near the Santa Fe area) and I was pretty excited.  I have wanted to see Santa Fe everysince my friend Sue visited here last year.  Plus, we found a cool Core of Engineers park to stay in and were looking forward to trying it out.  Our friends all rave about COE parks, but our one and only experience was not so great.  The drive was short and we even had time time to stop at The Crane Diner at the Phillipsburg 66 truck stop and have a hearty breakfast.  My eggs were ok, but Lee loved his Trucker special that came with a HUGE piece of country fried steak.  Plus, it was a real truck driver experience and I thought it was fun.

Then we got to the Core park and it was great.  Cochiti Lake is built on Cochiti land as a cooperative effort between the Core of Engineers and the local Indian reservation.  The engineers own the dam but the native americans own the water and the cooperation between the two seems to be working well.  The park is extremely nice, with water, 50amp and the cleanest dump station I have ever seen, and thanks to my husband owning tons of long cables and hose we were able to park backwards with a beautiful view of the lake.  Not sure why they would put the hookups so you faced away from the lake, but we are rule breakers now.

Our site at Cochiti Lake

Since the reservation was right next door we drove through trying to find a local Pow Wow that was happening (we had seen some hand painted signs) and stumbled across a local jewelry maker.  It turned out that it was in Julius’ house and his aunt and grandmother make the jewelry.  They had a small table set up in their living room and he came right out to meet us.   I was simultaneously excited (been wanting to buy something for my niece Bailey that was authentically Indian made) and nervous because I was in his living room.  Turns out we did all the right things, didn’t take pictures, made eye contact, introduced ourselves by name, and shook hands gently.  I also ended up buying a bracelet and had a very nice conversation with Julius who invited us to church in town for Palm Sunday.

Going to church on the road s always a treat and the opportunity to go to a Spanish church on Palm Sunday in an Indian reservation was amazing.  But church is not really Lee’s thing, and I knew it was unlikely I would have the nerve to go alone.  Next, we followed Julius’ directions to the Pow Wow in the local elementary school gym.  Although the event was open to the public, everyone in the parking lot was a native american. Lee and I both felt like we were intruding on a local cultural event, but we did get out of the truck and walk up to the door.  Once we peeked inside, however, we lost our nerve and using the $3 cash per person admission fee as an excuse we left. (We only had quarters in the truck) Now keep in mind I have wanted to see an authentic pow wow for many years and here was the opportunity right in front of me, but I didn’t take advantage of it.  Not good.

So we decided to go to the Tent Rocks National monument, only 4 miles away, and since it was a National Park we felt like we would be on solid ground.  As we were making our way back through the reservation, however, I asked Lee to stop the truck because I saw this beautiful black puppy limping.  He came right up to the truck when I opened the door and I saw he was badly tangled in metal wire and a small metal sign. My heart went out to him and I was trying to figure out what to do because it looked like it would take wire cutters to get them off, when Lee said, “Watch out for the other dog.”  I glanced up and a very huge, very mean looking dog (with a collar) was staring right at me.  He was obviously looking out for the puppy and I realized that as soon as I tried to get the wires off the dog would definitely yelp and then would the big dog attack me?  Plus  I didn’t even feel I could get out of the truck and if I tried to lift him in, he would yelp.  I simply didn’t know what to do.  I kept looking at the big dog, who didn’t take his eyes off me, and the puppy was wagging his tail, and Lee was very concerned.  When the puppy jumped down and limped back to the big dog I am very ashamed to say I just let him go.  I hoped they were headed to their home, but when we drove down to tent rocks I was upset.  So much so that as soon as we got to tent rocks I asked Lee to drive back and look for him.

Lee drove up and down every side street in this little town and we even stopped and talked to one high school aged kid who was outside his house.  The problem is there were tons of dogs all over the place on the reservation and most were unleashed with no collars.  We drove for at least 30 minutes but we just didn’t see them and and finally we went back to the camper.  I was incredibly upset.  It wasn’t just the dog, although that was bad enough, but in less than an hour I had opportunities to do three brave things and didn’t do any of them.  So this supposedly brave new me, wasn’t so brave after all and I couldn’t get the picture of the dog out of my head.  I should have walked into the church,  gone into the Pow Wow, I and helped the dog.    The kind of person I want to be would have done those things and it makes me sad to  realize that I have so much  more work to do.

Needless to say it was a tough night, but after getting some sleep I did wake up feeling better.  We were headed into Santa Fe, which is a town I have wanted to see since my friend Sue came here.  We left early and drove down to the Santa Fe Plaza.  For 10am on a Sunday the parking was pretty full and we saw signs for a special event.  Since it was Palm Sunday and there is a huge church on the plaza we thought most of the spaces were taken up by people going to mass.  We finally found a place to park in the school and we walked over to the plaza passing the church along the way.  As we went into the plaza we saw that there was a crowd and some people on the grandstand.  The local churches were holding a multi-denominational ceremony in the courtyard and after the ceremony  all of the participating churches with their congregations walked around the plaza holding palm leaves to remember Jesus’ walk into Jerusalem.  I watched with tears in my eyes as all of the groups circled the plaza twice and then split off in small groups and walked into their individual churches.  The bells of the  Cathedral Basilica of St. Francis (patron saint of animals) started pealing as their group entered the huge front doors.  In that moment I felt as if God was speaking to me and I was forgiven for my cowardice.  The message was it’s OK if you are not perfect, just do better next time, and the heaviness I had been carrying in my heart was lifted. 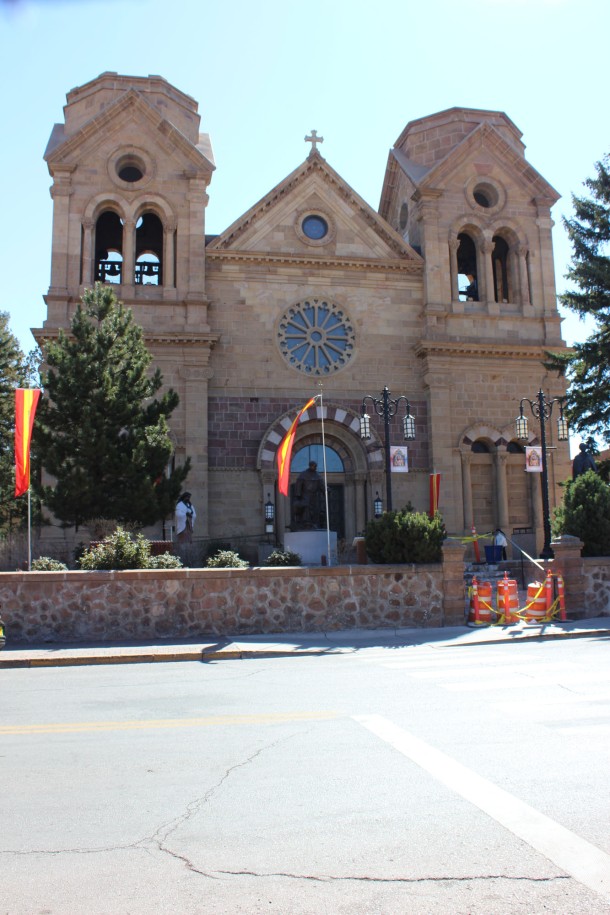 The Cathedral Basilica of St. Francis 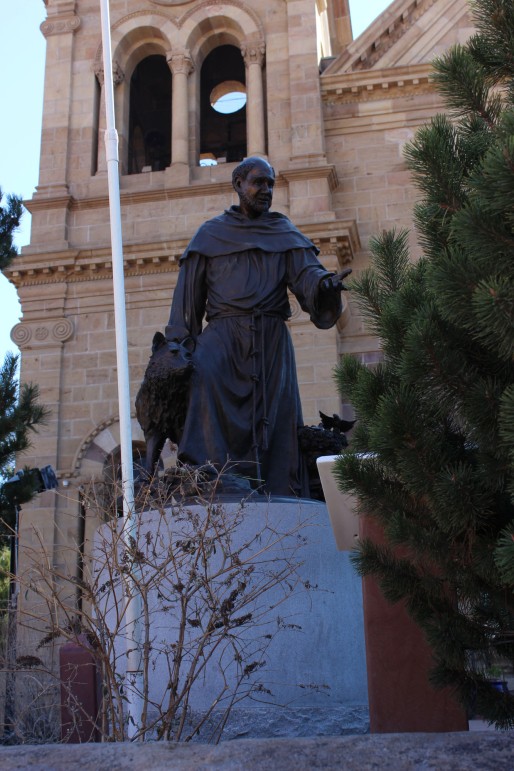 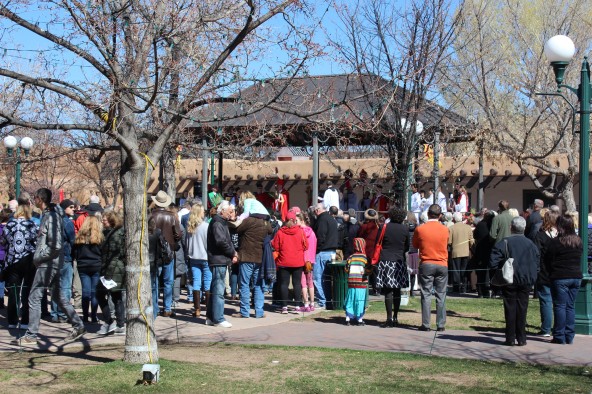 The multi-denominational ceremony in the plaza 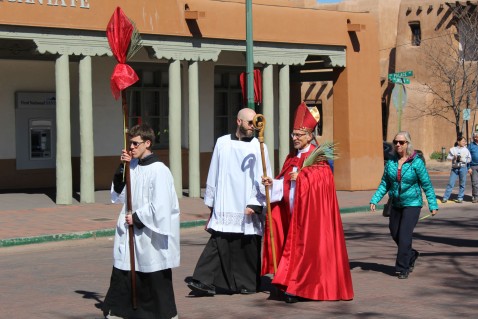 This group sang as they walked, brought tears to my eyes

The Plaza is wonderful in its own right, by the way.  Amazing shops, cool little restaurants and I just loved the old part of town.  But I will remember it for the Palm Sunday service I saw there and the feelings of forgiveness it evoked in me.

16 thoughts on “Living a Life with Less Fear”