When we came to Charleston for the holidays our initial plan was to leave on February 20th and head west.  A couple weeks before our departure date, Kyrston (whose lease was up) found a house to rent.  She and her husband are not 100% sure they want to stay in this area, so buying wasn’t on the table, but we encouraged her to look into finding a place with a yard and she was lucky enough to find one.  The challenging part was she didn’t have a ton of time to plan the move, and she also wanted Lee’s help with building some furniture for her new place along with some other “make ready” projects.

Lee was excited about the project and I wanted to help with the move so we decided to stay another month.  The daily rate is double what the monthly rate is at this campground so our new departure date is March 20th.  After that we are going to visit Alabama, Mississippi, Arkansas, and Missouri on our way to see Kat and be in Minneapolis for the birth of her first child.  Thankfully we built lots of extra time in the schedule so we will still be able to get state stickers in all of the states before June.

In order to help Kyrston, Lee went to the house with her every day.  They also took Oliver almost every day which was really good for him.  His world has been pretty small, but he loved exploring the new house and the backyard was a big hit.  He also “helped” with the table building, handing out screws and using his play drill.  The pictures and videos were really cute so I thought I would share them with everyone.

Here’s Kyrston, with the first thing she ever built, a sawhorse. To build more stuff.

That’s my girl cutting some plywood to make a shop workbench using two base cabinets bought at a Habitat ReStore.

It won’t be long before that parts bin is filled with screws and nuts and bolts and such.

Kyrston got the idea for the furniture from a woman named Ana White.  She has a website which shows people how to make farmhouse furniture pretty inexpensively.  I love the way it looks and the costs were relatively inexpensive.  It is time consuming though and I think the projects are taking longer than either Lee or Kyrston thought.  Still can’t argue with the results.

Simple pantry shelves for the laundry room/pantry. The middle vertical pieces are to keep the shelves from bowing, but they “float” so they can be moved around as needed, that’s why they aren’t centered.

Working on a console/sofa table for the living room. What’s cool is you can build them to whatever size you need.

Staining the top pieces of the console table.

Oliver had to stay inside during the sanding but he loves watching his mommy work. 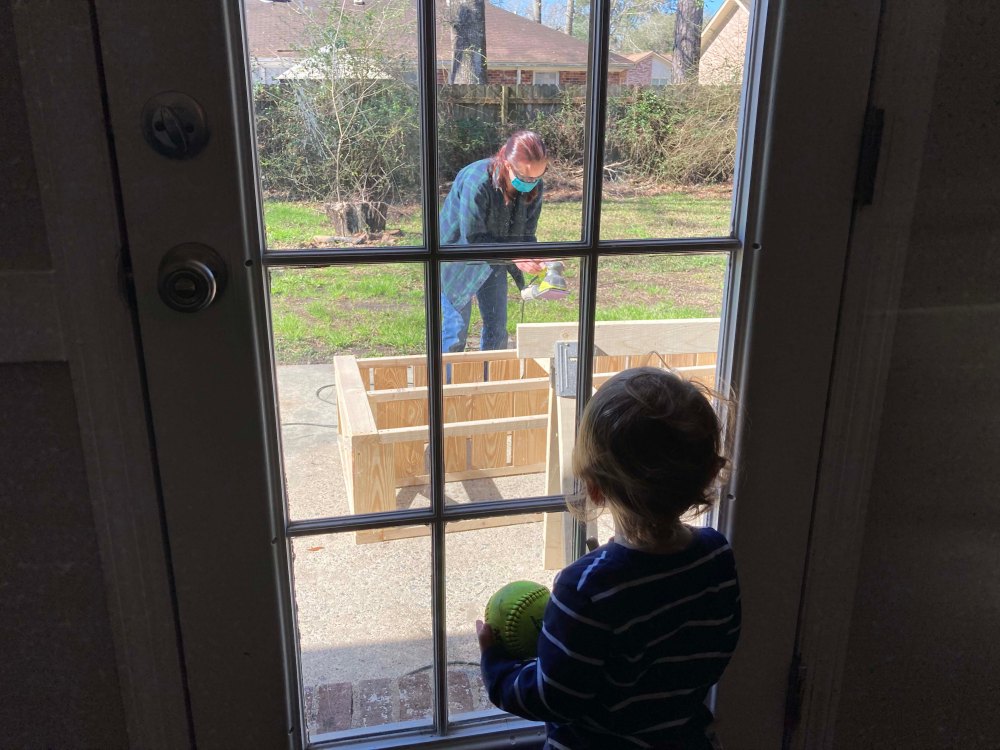 The farmhouse table was even more complicated, but very nice and done by move in day.  The most time consuming part was waiting for pieces to dry between steps, so they worked on multiple pieces at the same time.

The chairs Kyrston bought used on Facebook Marketplace and stripped and painted them. They still need new fabric for the seats.

While all this was happening, Oliver was mostly delightful.  He would walk around and chatter throughout the day and only occasionally demand immediate attention.  Lee really enjoyed both helping his daughter and spending so much time with his grandson and that alone made all the work worth it.

Playing in a big box.

Playing in the mud 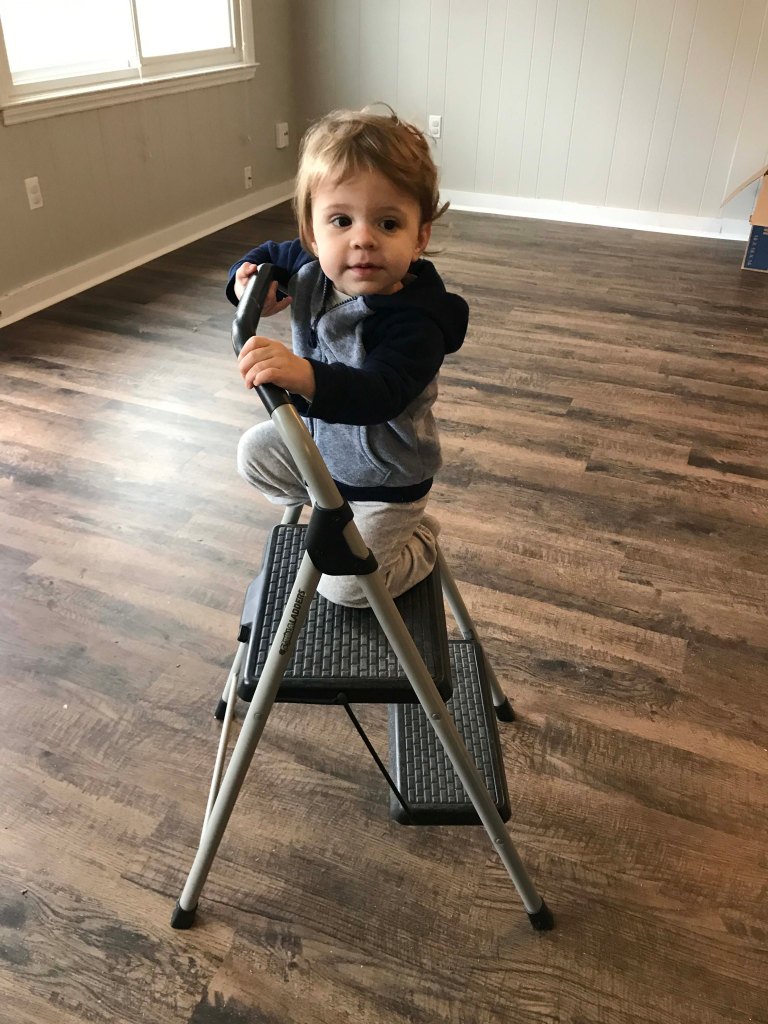 Up and down the steps.  Kids don’t need fancy toys to keep themselves entertained

Hanging out in the cabinet

And trying on some cool shades

He would play and play and then just collapse. This day he took a nap on the floor.

I came one Saturday and brought a sand/water toy, but honestly he’s more interested in what’s laying around

Lee and I also went to Lowes and bought Kyrston and Jeremy a grill as a house warming present. How can you not have a grill on which to barely cook ribeyes??

There were so many great pictures and videos from the week, but here is my very favorite. Oliver carried that level around for a whole day, singing at the top of his lungs. Apparently he thought it was a musical instrument.

As a grandparent sometimes you see a picture of your grandchild that flashes you back to when your own child was small.  This picture evoked the same memory for Lee and I and I found the one of Kyrston when she was little so you can see what I mean. 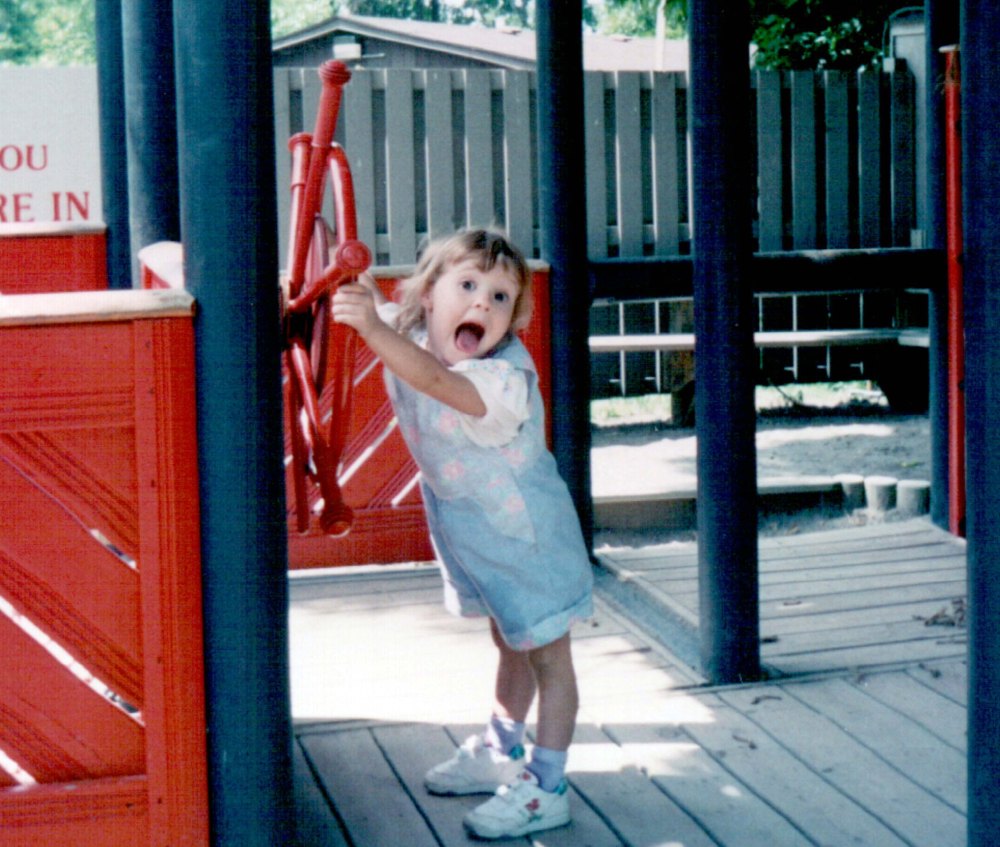 Lee and I both miss traveling, but these moments are really special, and it’s a privilege to have a lifestyle that allows us to be here for them.  Plus I get to take Oliver on moving day just the two of us and nothing is really more special than that.

6 thoughts on “Helping Kyrston with her New House”

Leave a Reply to Nancy and Bill Cancel reply