Lee wrote this post based on a trip he made on a day I was working.  I have zero interest in visiting prisons let alone haunted ones, but Lee loved it so much he went back for a second trip in the dark.  – Trace

Before you go, be aware that while there is a tiny little parking lot on the West side of the property (bottom center of the image below) it is NOT suitable for any kind of a rig. However, the west side (southbound) lane of Jefferson St is free to park, and the property is only a few blocks east of the main drag through town, so getting there and parking and getting out again is just a matter of using the grid pattern .

As we sloooooooowly work our way towards Charleston for Christmas, we are stopping at a variety of places and spending more time in states we really haven’t spent any time in. Trace works Mon-Fri, so I get to find things to see and do that are interesting to me, but not anything she would be interested in.

In West Virginia, we both wanted to see New Vrindiban, and while we waited for a weekend day to do that, I found a couple of places to see. I’ve always been fascinated by “fringe” places. Places that are extreme. Far away, or really high, or really deep, or just unusual. Abandoned places. Dark places. I’m not morbid, I just like history.  I also really like Gothic and Deco architecture, as well. The West Virginia State Penitentiary fit the bill nicely! 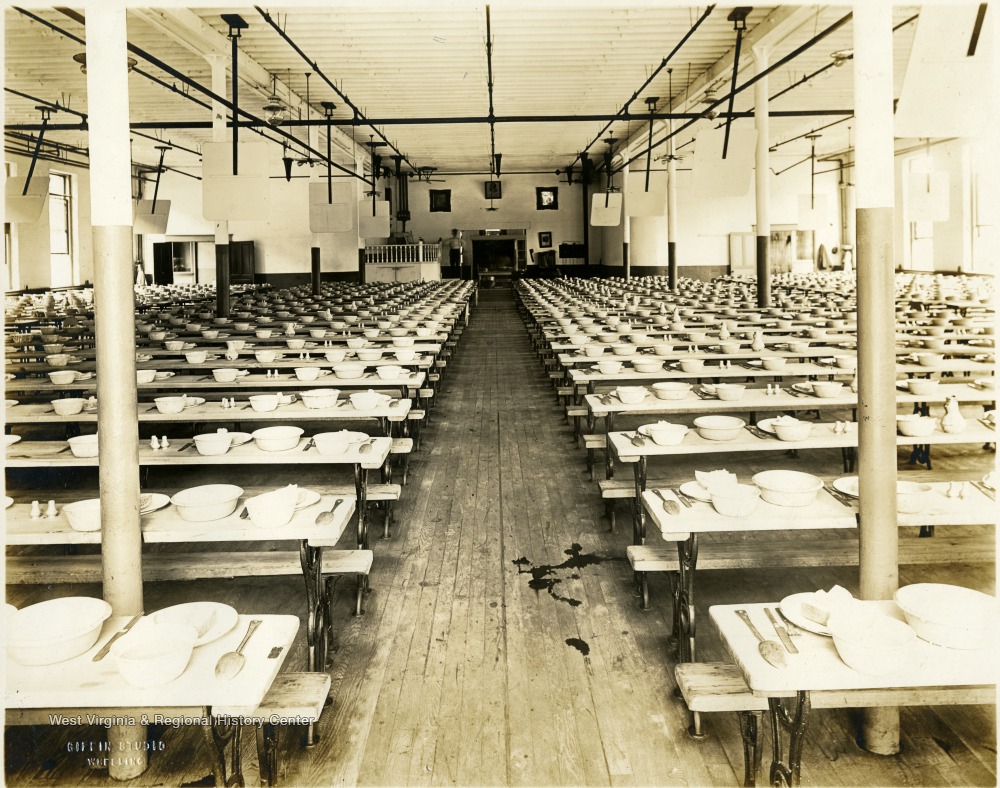 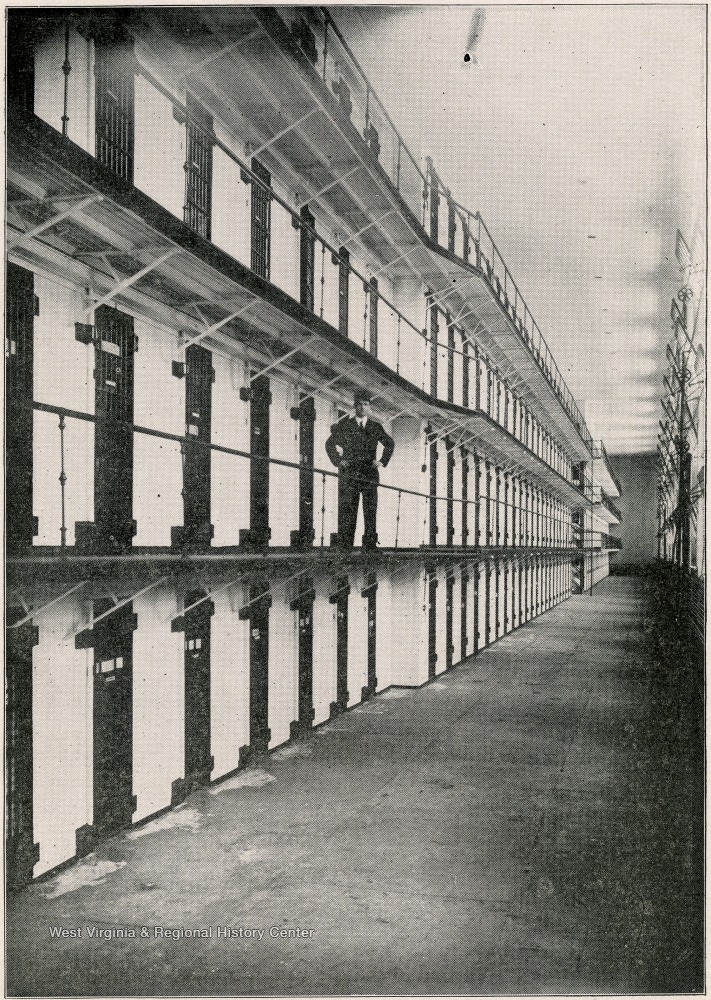 Located in Moundsville, WV, just a little south of Wheeling, the WVSP was built from 1867-1876.  It  was modeled after the Joliet prison, famously used in The Blues Brothers. The original administrative buildings and cell block wing started operating in 1876 and finally closed in 1995. When it first opened, conditions were “good”, as prison conditions go, but after the turn of the century it all went downhill. Eventually the facility landed on the Department of Justice’s Top Ten Most Violent Correctional Facilities list and stayed there for many years.

In total there were 40 homicides inside the prison, but tour guides claim those were only the ones that were counted because witnesses saw them. Hundreds of other deaths were never ruled homicides.

In 1929, the prison was so overcrowded that they decided to double it’s size. The 5’x7′ cells were far too small for three people, but that’s exactly how many people they had in the cells. One on each bunk and one on a mattress on the floor. It took until 1959 to complete the construction, due to materials shortages during World War II. Even after the addition, the prison was still housing more than twice it’s capacity until it closed.  The WV Supreme Court found that conditions at the pen were so bad that just it constituted cruel and unusual punishment, and violated the prisoners 8th amendment rights.

Inmates in the overall factory

Over the years, 94 men were executed at the prison, most by hanging. Until 1949, eighty four men were hanged, and until 1931 those hangings were public events. At the last public hanging, Frank Hyer was executed for murdering his wife, but when the trap door opened and his full weight hit the rope he was decapitated. From that point on, hangings were by invitation only. After 1951, executions were completed by the electric chair, which was built by a prisoner, who was subsequently stabbed to death by fellow inmates.  See this is all so gruesome.  Totally not my thing..yuck! – Trace

“Old Sparky” was used on nine men until 1965 when capital punishment was prohibited by the state. The original chair is still in the prison, and until recently visitors were allowed to sit in it.

The administration building stands in the center of the original structure, and housed offices, a barber shop open to the public and the non-contact visitation area.  The third and fourth floor were occupied by the warden and his family. This makes me wonder how soundproof those floors were.  Can’t imagine raising kids in that environment. -Trace

It is a beautiful building. Sad it held so much sorrow – Trace 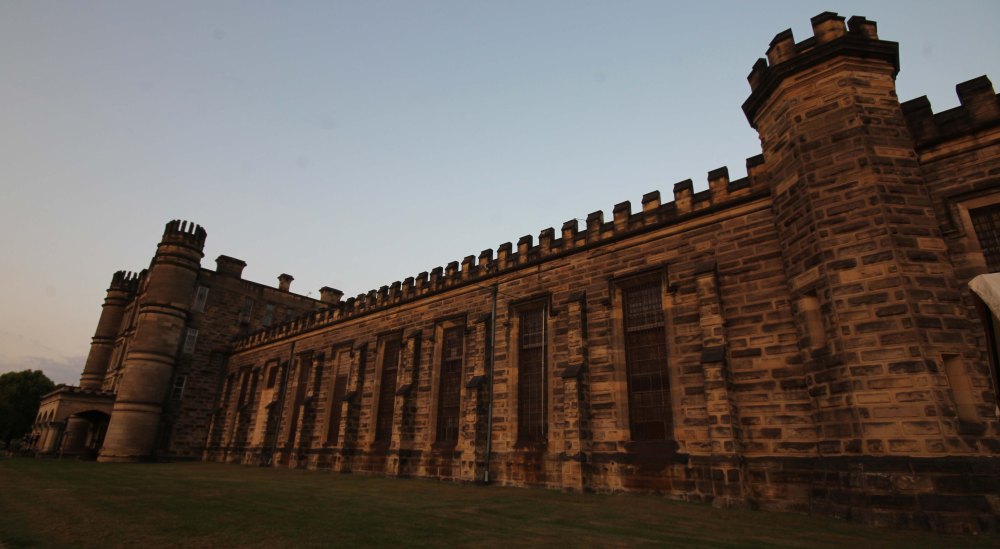 Gothic Revival architecture “exhibits, as much as possible, great strength and conveys to the mind a cheerless blank indicative of the misery which awaits the unhappy being who enters within its walls.” 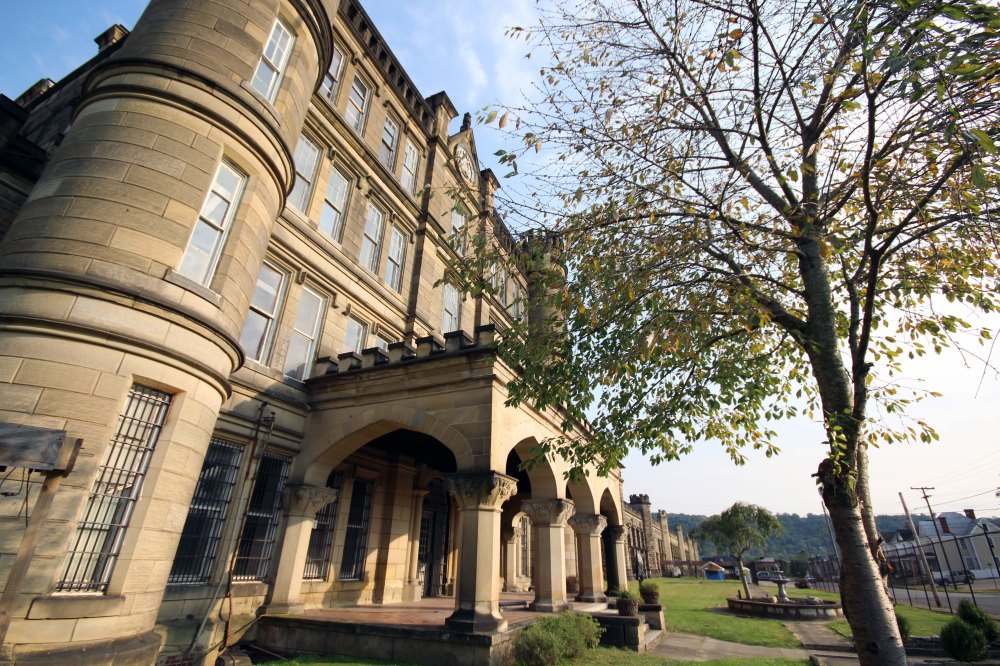 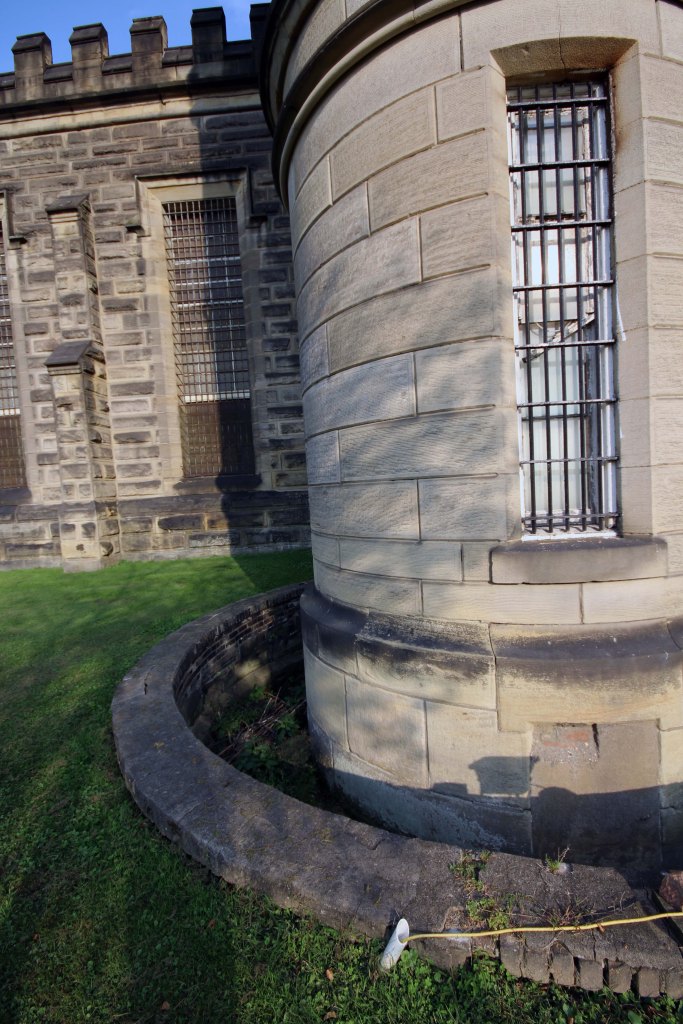 This is the part of the non-contact visitor area where visitors sat. The prisoners sat on the other side, and they could see each other through windows, and spoke on phones.

Artwork throughout the facility was painted by various prisoners over the years.

“”Blood Alley” as it was known to the Justice Department was the location of many, many throat cuttings and stabbings. Eventually they painted the hall with a red line, and prisoners were required to only ever walk single file in that two foot path. At the end of the hall a “guard shack” was manned with a sharpshooter. Anyone who stepped over the red line was shot with a rifle. That happened many, many times.

Window and gun portal for the rifleman overseeing the hall.

The large contact visitation area, complete with a tableau made by an inmate of a native family to complement the burial mound across the property. Note the guard cage above on the left.  Ok that’s just weird – Trace 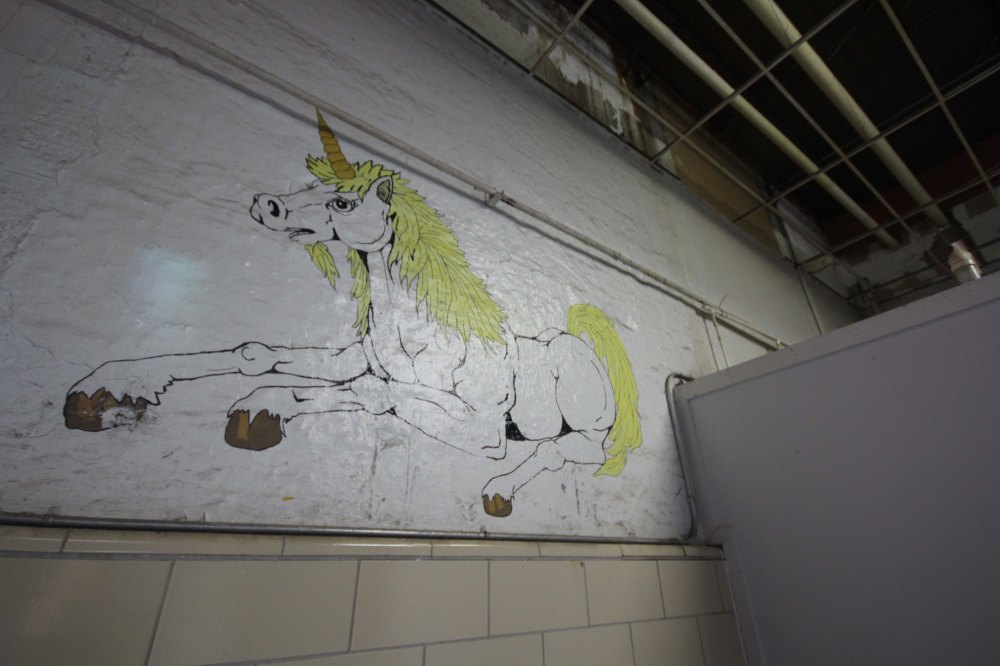 And they are naked? Again weird – Trace 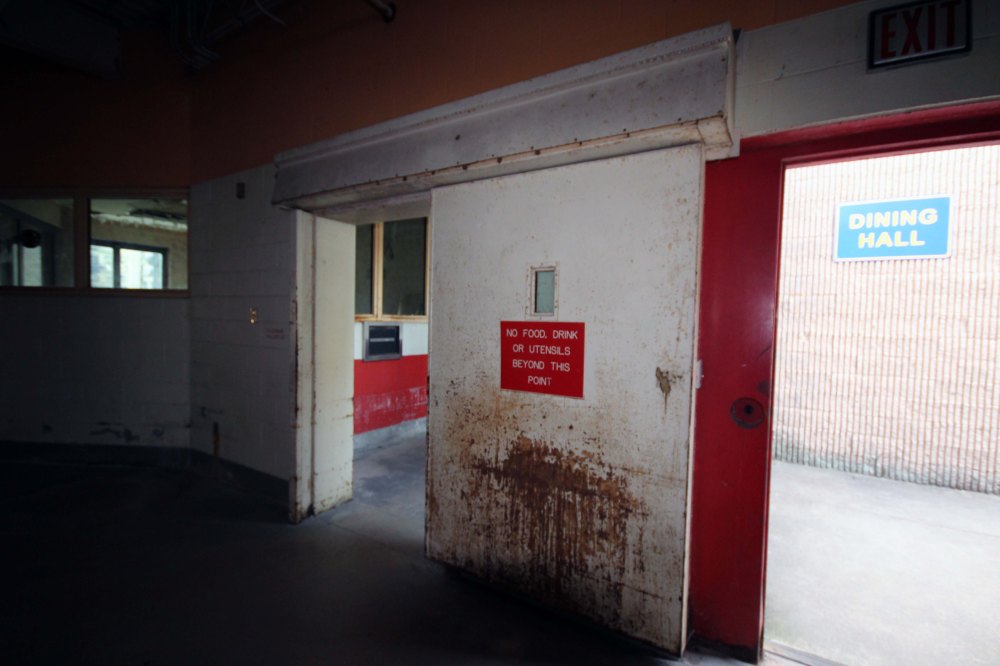 The guards ate in a separate area behind this wall.

The windows where inmates selected their food. At the end of the line was a thin slit through which they would get their tray. 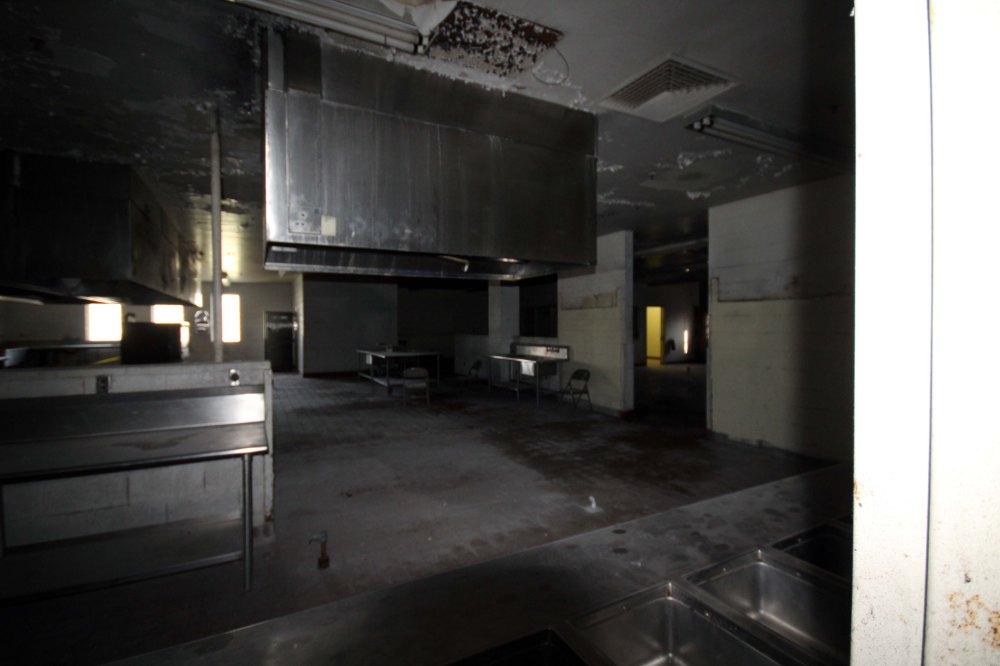 Just behind the wall separating the guard’s dining area from the inmates area is a “riot wall”. A section of the outer wall of the building that was not reinforced with rebar that could be knocked down by law enforcement in the event of a riot.

You can just see the outline of where the mortar has cracked where the wall has settled and isn’t reinforced. 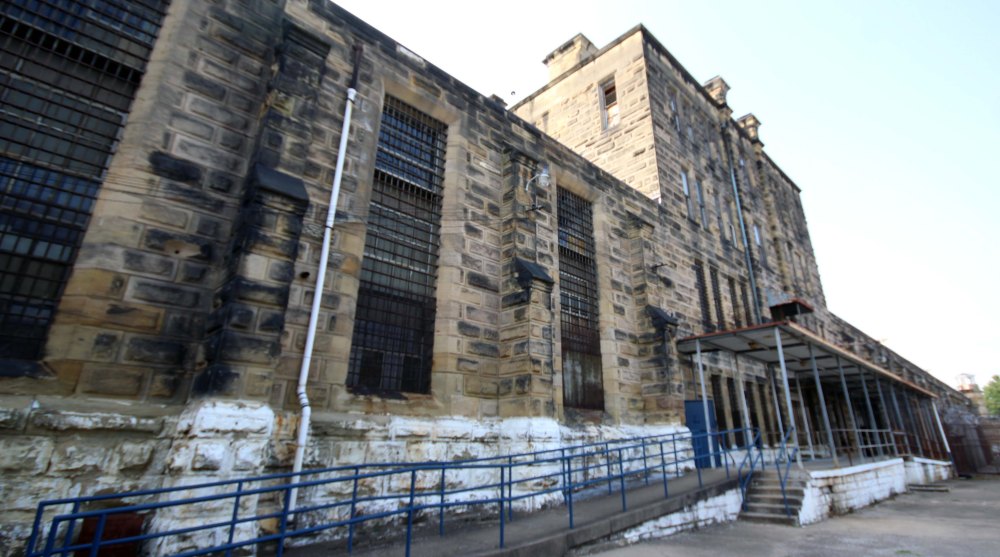 The wagon gate was the first building constructed and was used to allow the public in to view hangings. 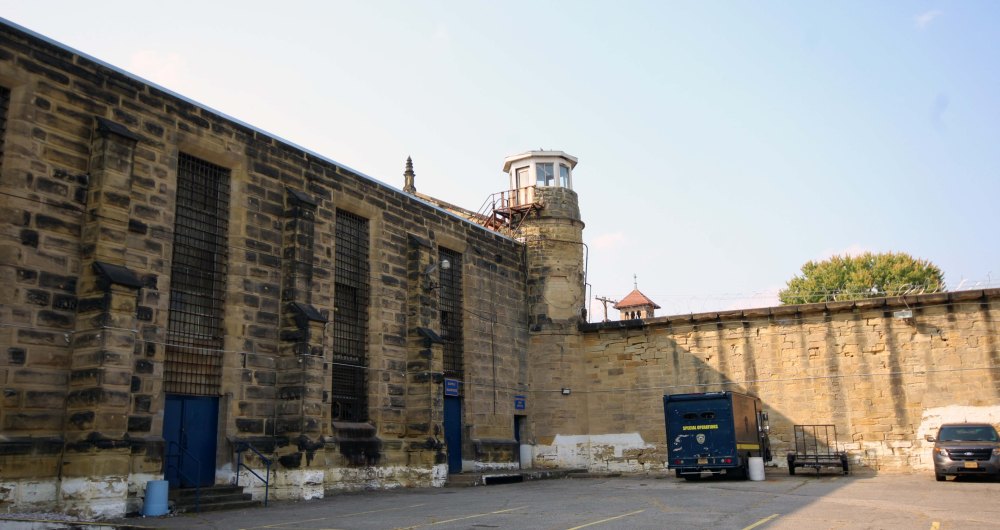 This area is where the original gallows was.

These are the original cells in the North Block, although the fencing was added much later. Each door had to be unlocked and locked independently, but a sliding bar across the top acted as a second lock for all of them at once.

Each cell block had a special area for gang leaders, to keep them segregated from other inmates, and they shared a small shower.

This is what a 5×7 cell looks like. This is one of the single bunk ones for the gang leaders.

Note the deep grooves on the concrete where a shiv was sharpened over time.

This cell was the home of the prison’s resident tattoo artist. 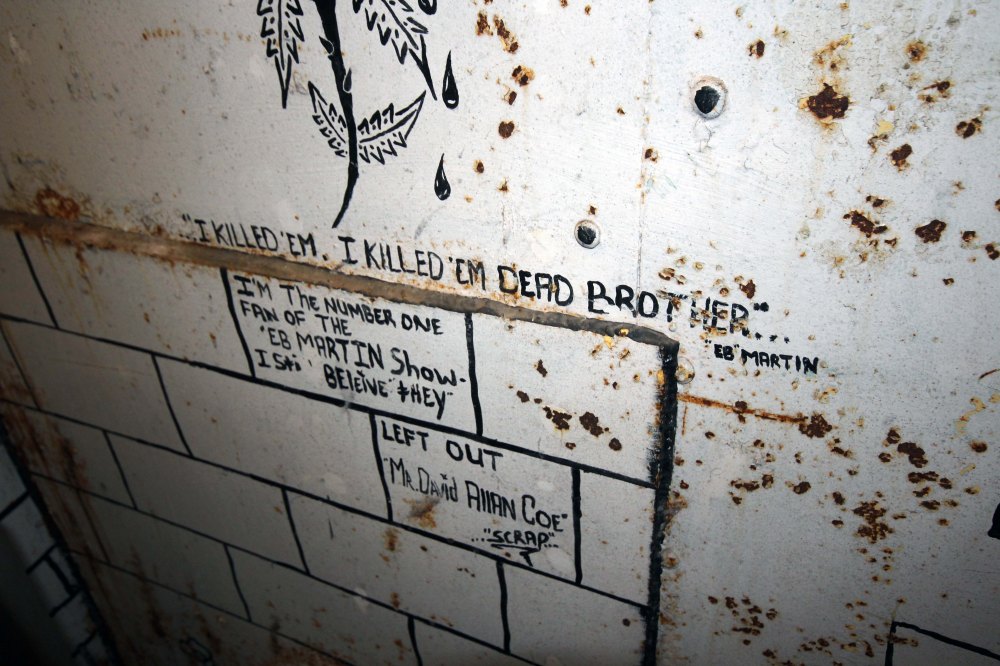 An inmate who was in a wheelchair had to have his door widened at the bottom for the wheel to fit through. Also note the “bean hole” in the bottom of each door. For the inmates who slept on the floor, if they slept with their head near the door, they risked having their throats slit. 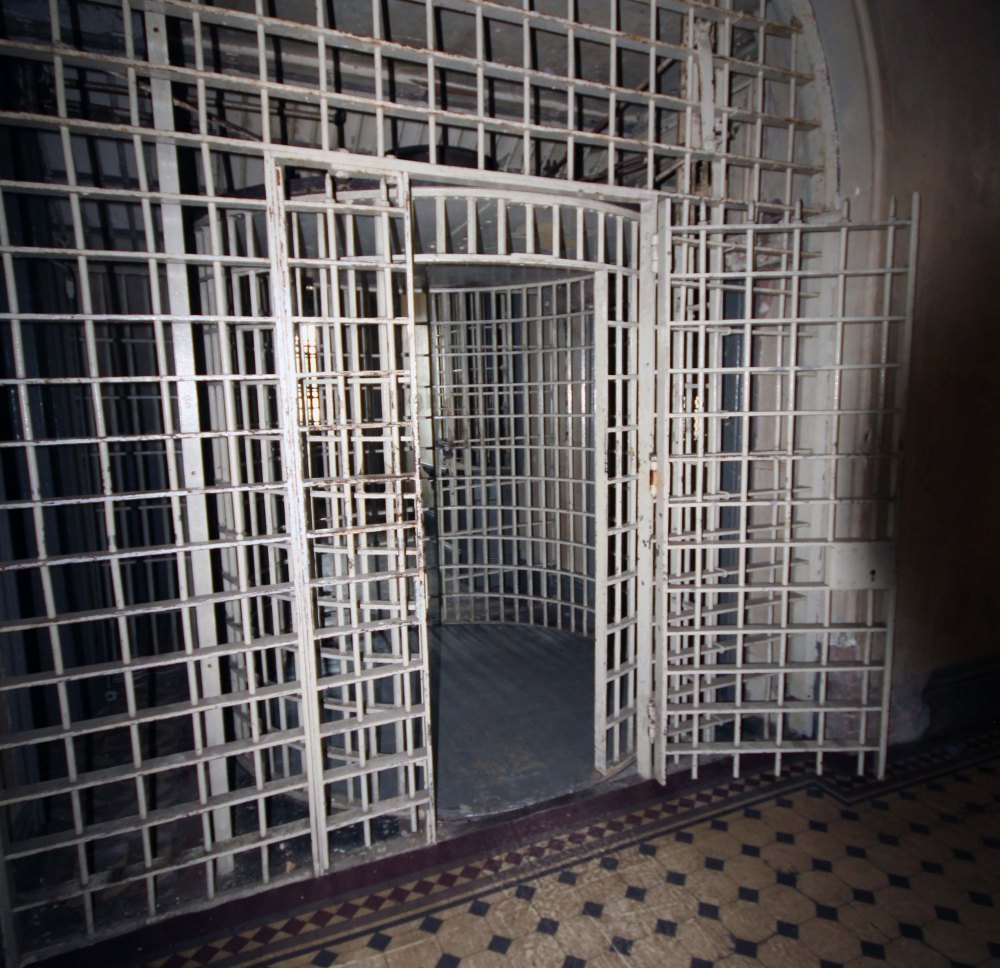 This is the “wheel”. A circular cage inside another cage with a door on each side. People entering the prison went into this and it was rotated to align with whatever door they were meant to do through. There are only two of these in the world that still function. 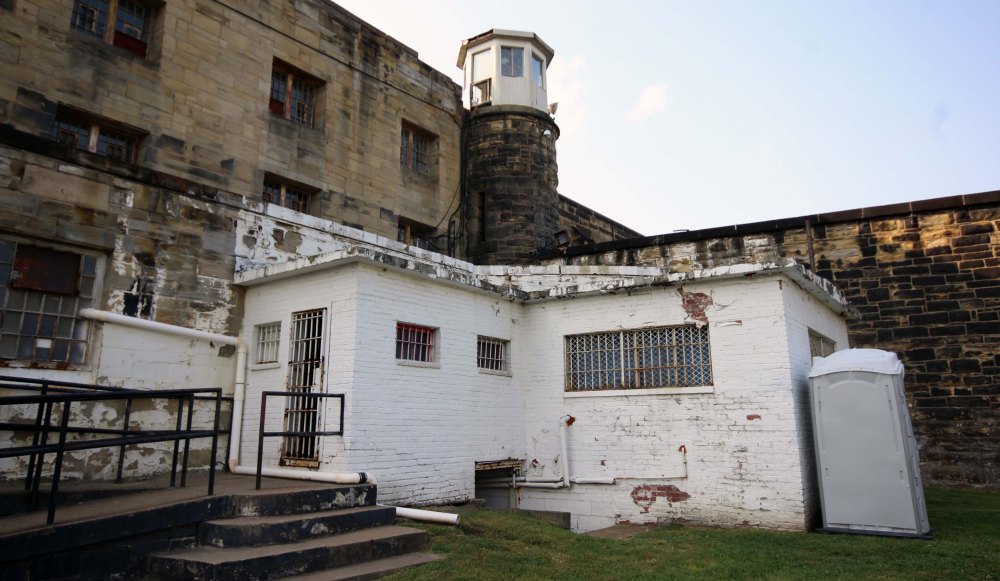 Each block had a “shower” that could handle three men at a time. The shower was open to the rest of the block, and people were on a schedule that went more or less all day to cycle everyone through. For some reason this really bothered me when Lee explained it.  Everyone could watch and comment while you showered – Trace

In the pictures below, you can see where Old Sparky used to be displayed. 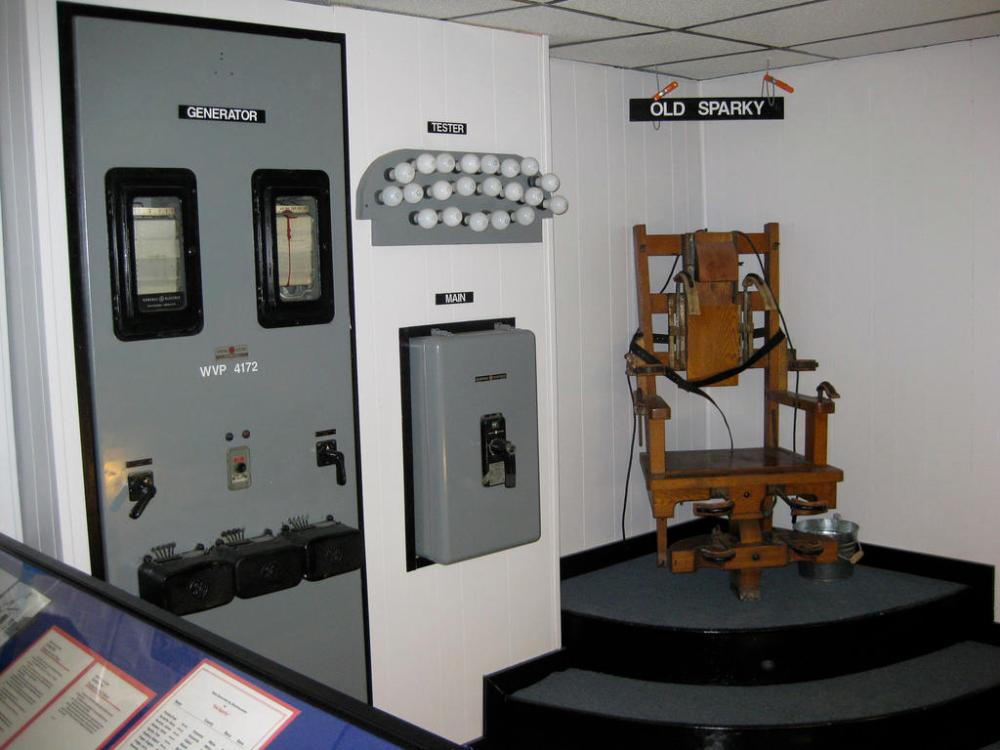 The day before each execution, an electrician would hook power up to one of the three buttons. Three guards would each push a button simultaneously, and so none would ever know which one actually killed the inmate. There was also a telephone, not pictured, and not once in the entire history of the prison did any execution ever get delayed or stayed at the last minute.

I had such a great time at the prison that I decided to go across town a few miles to the foothills and see the prison cemetery where people were buried who died, were murdered or were executed, if nobody ever claimed their bodies.  Ok I am a little worried that this is Lee’s idea of a good time and as a capper he goes and visits a cemetery – Trace 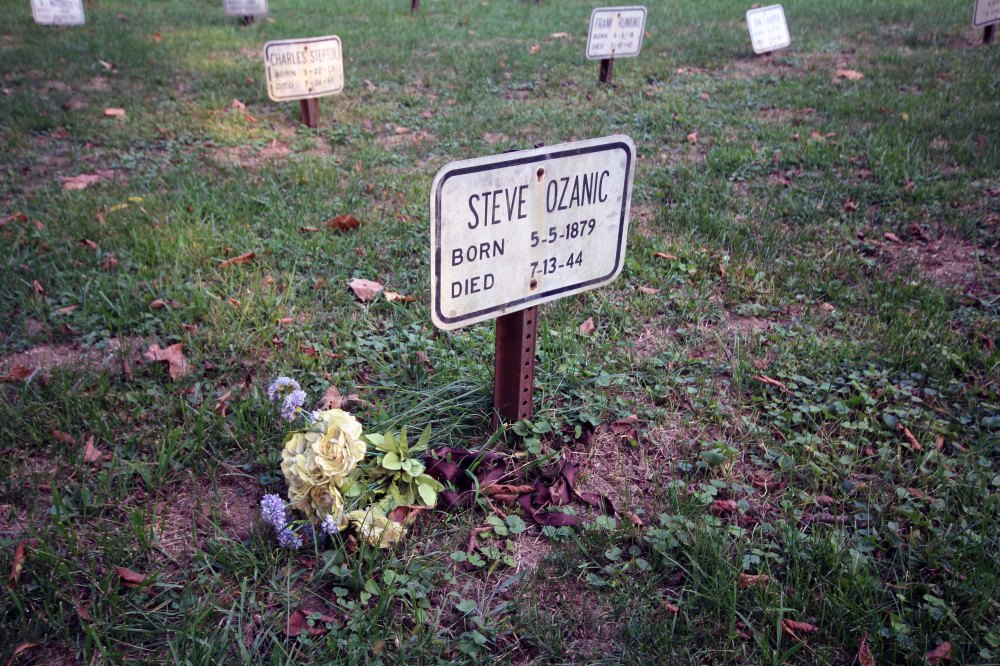 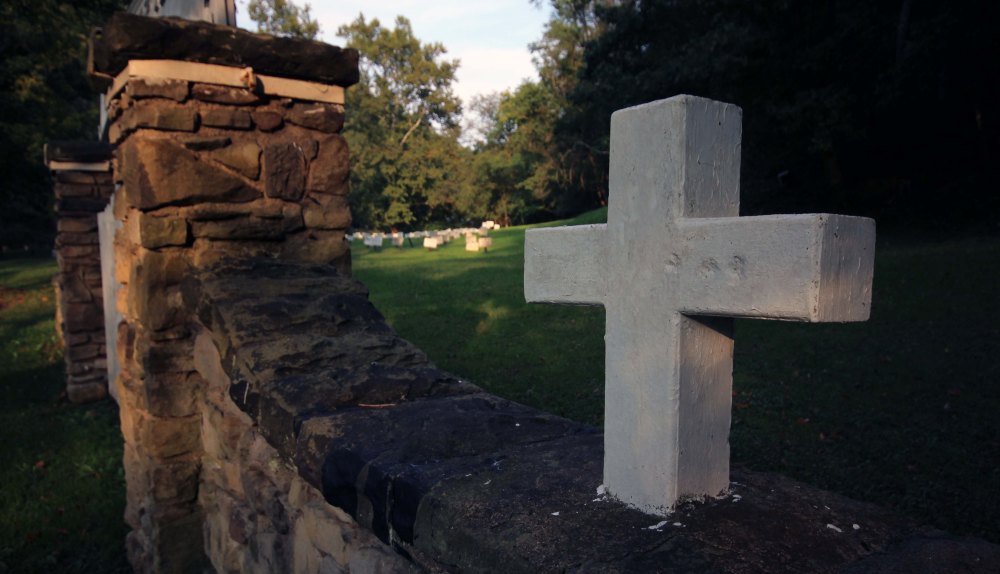 And I was still not satisfied, so I decided to go back the next day for a nighttime flashlight tour. Much, much creepier, and included parts of the prison the first tour did not include.

The first stop that was new was outside, to the entrance to the basement, where solitary was.  He was nervous about going back in the night.  I was nervous about a restless spirit attaching itself to him and coming back with him.  I told him not to bring back any riders.  My work schedule would have allowed for this second trip at night, but no way.   – Tracy

This are pictures taken in night mode. Keep in mind he went down here with just flashlight light…yikes – Trace

The night tour also included the infirmary and the psych ward. 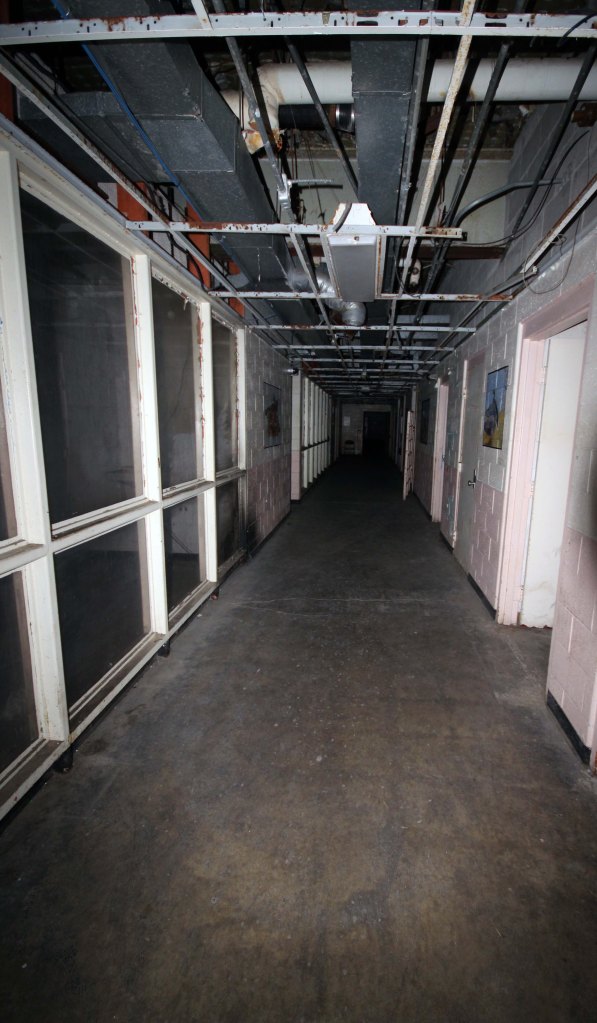 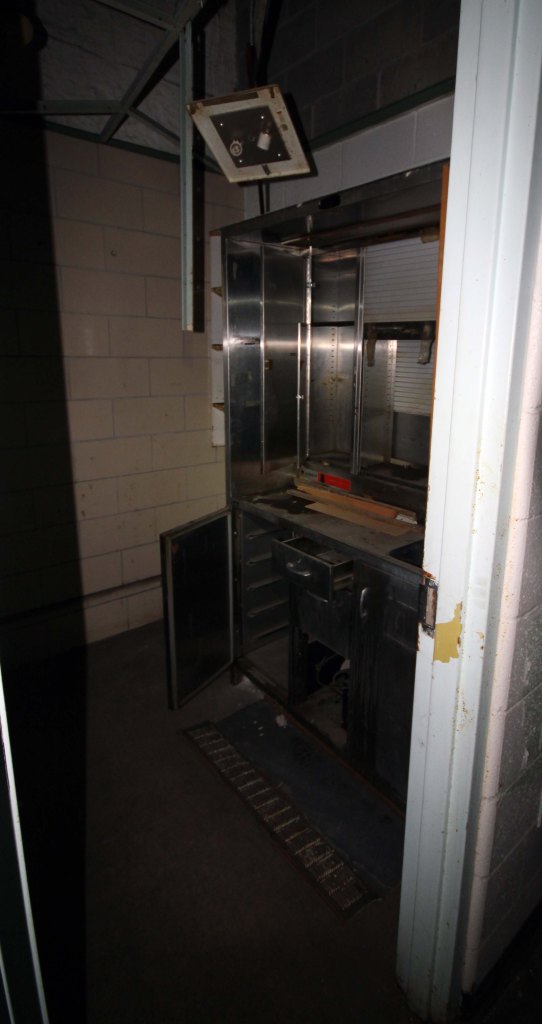 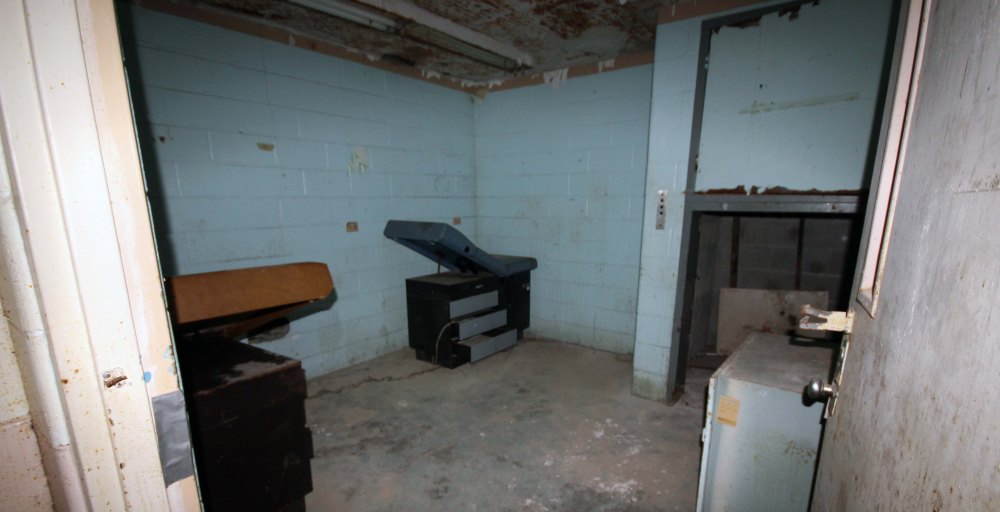 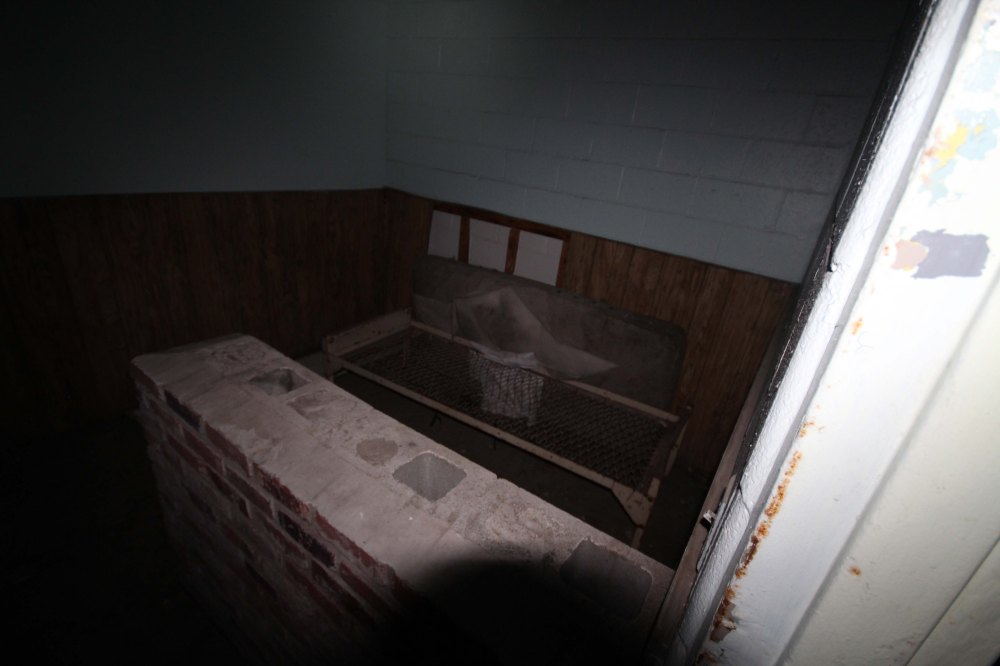 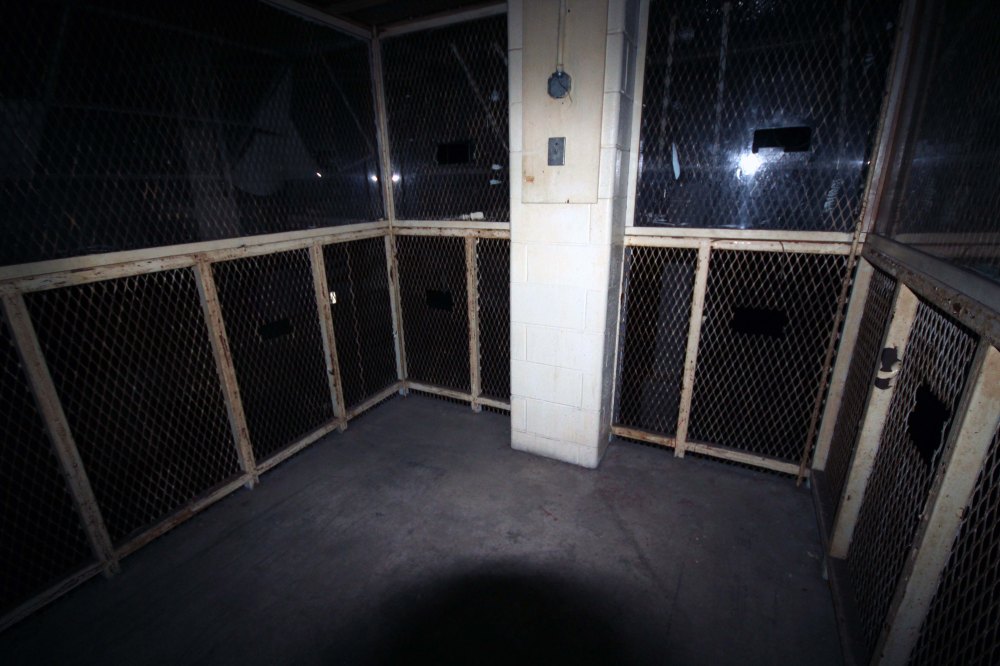 Remember the hanging guard shack in the contact visitation area? This is the inside.

The building is lit up at night with creative colors for the season, because they do a haunted prison halloween thing, and it really photographs well. 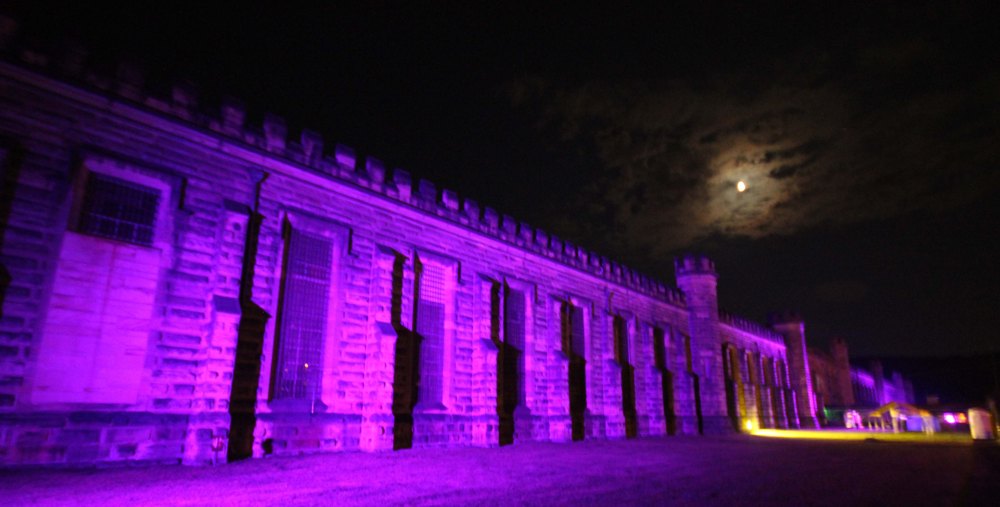 So that was my trip to the prison.

Stay tuned for the next dark tour, the Trans Allegheny Insane Asylum!  Anyone else seeing a pattern here? – Trace