Everyone our age knows where they were on 9/11/2001.  I was actually separated from my family because we were in the middle of relocating to New Hampshire and Lee was still in Ohio with the kids.  I was in our new home to be with the home inspector and the owner was watching TV.   Like everyone else I thought the first plane was a tragic accident, but when the second hit I vividly remember thinking, “This means war.”

The next two weeks were incredibly stressful as I didn’t feel comfortable flying home and being with my family.  I was also staying in a cabin in the woods, with no television or internet.  Many of those nights after work I went to the local VFW and watched what was happening surrounded by war veterans.  They welcomed me into their community and we watched together as the pieces came together as to what was happening.

Many images and feelings come to mind from that time period, but in particular the courage of that small group of people who fought back and died in a Pennsylvania field really spoke to me.  It gave me hope for the future of this country and made me extremely proud to be an American. When we learned that we were only 24 miles from the site of the crash I knew we had to go, and early Saturday morning Lee and I went to the Memorial.

I found the experience very moving and the Memorial was extremely well done.  I will let the pictures tell most of the story, and will just say if you are ever in the area, I highly recommend you stop.

The entrance is a bit hard to find and the signage to get there is not great.

“Every element in architecht Murdochs’ design is aimed at controlling what you see and when you see it. When visitors reach the parking lot at the top of the hill, they are greeted by a massive freestanding concrete wall rising from a field of wildflowers. It angles toward the horizon, evoking a plane’s ascent. Rather than provide an overlook where you can survey the entire crash site, the architects have completely blocked off your view. As you get closer, the great wall parts, allowing a glimpse of a second wall and a bit of sky. The one-room visitors’ center—a mere 7,500 square feet—is gripped by this concrete vise, unseen until you step through the breach.”

Upon arrival we saw an unusual long building 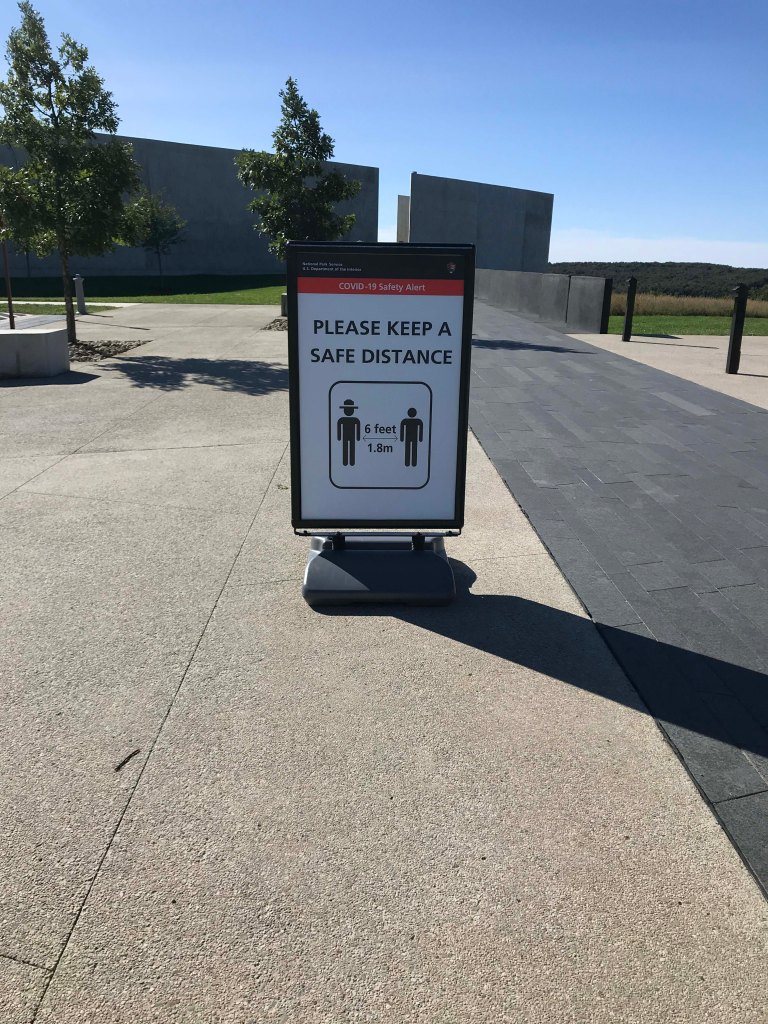 Even though it was outside I wore a mask which had the added benefit of keeping my face warm. It was chilly that day

The walkway is the flight path of the plane, and has time and location markers of the other planes. 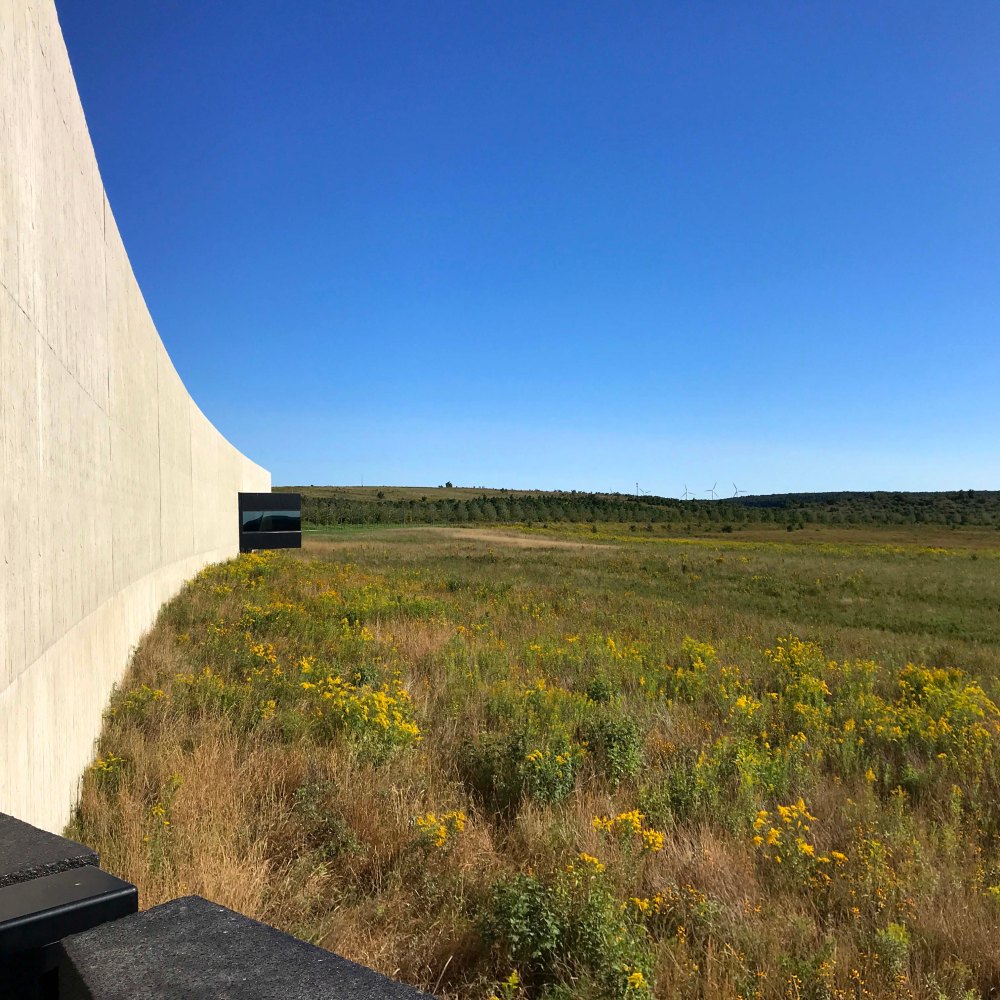 We later learned that this field was part of a strip mine and the government bought the land and is restoring it to its natural state.

The end of the walkway. The flight path continues to a wall of names in the field and eventually to a boulder that marks the point of impact.

We didn’t really understand the design, but when we drove down to the memorial at the bottom we learned that the building was designed to show the flight trajectory.  It made much more sense from below.  The design of the memorial is very subtle, but every part of it has a meaning which I appreciated.

Not a great picture, but the black outcropping is the end of the walkway.

“When Paul Murdoch designed the concrete walls of the visitors’ center, he specified that the wooden formwork should be from hemlock trees. The hand-hewn boards, which came from old local barns, left the concrete deeply scored with the impression of the hemlock grain, a nod to the resilience of the trees in the grove, as well as a subtle connection to the region.” 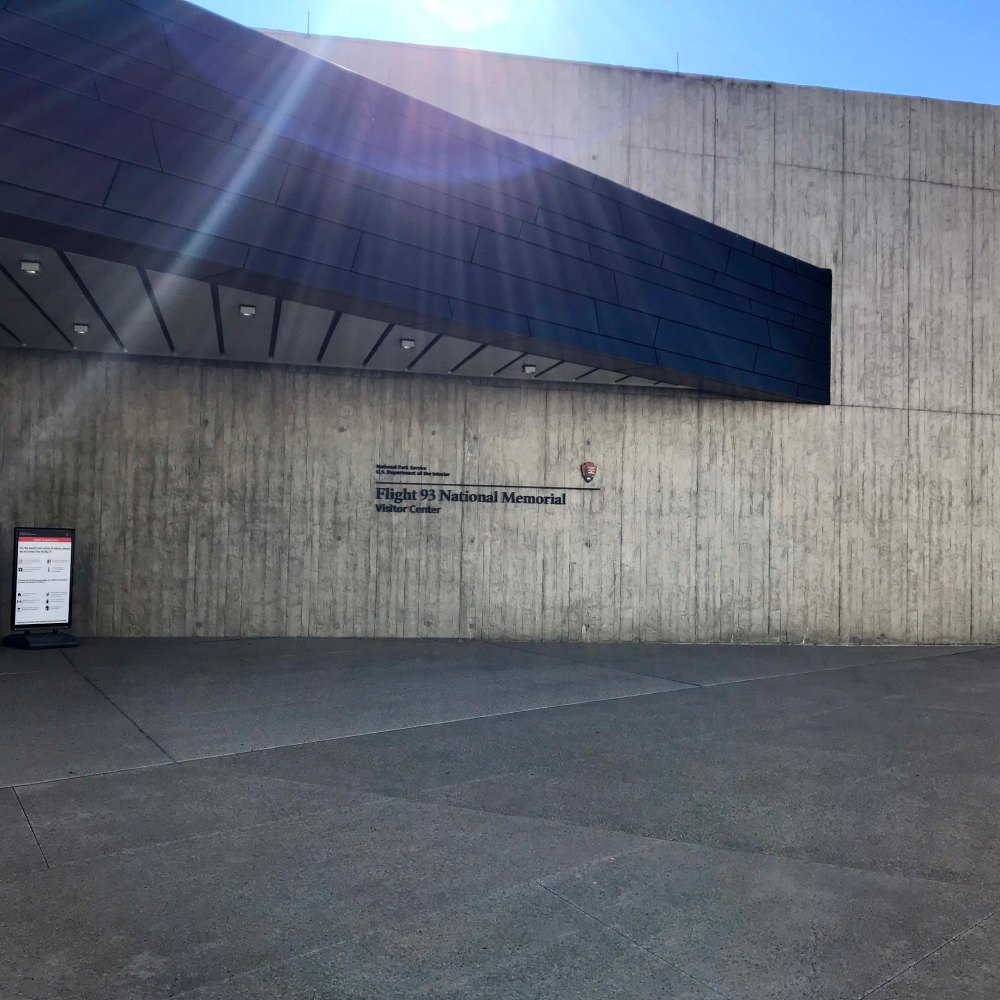 After seeing the walkway we went back into the visitors center. It was crowded but everyone was masked and respectful. 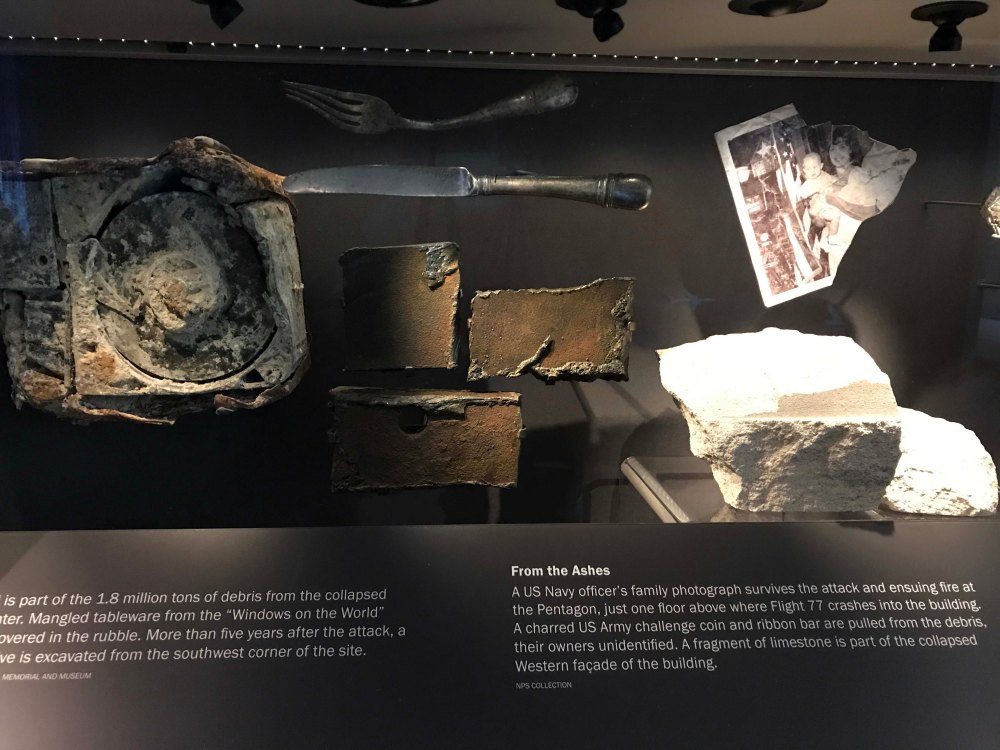 The first section talked about the two towers and these pieces that were found after the building collapsed really moved me. 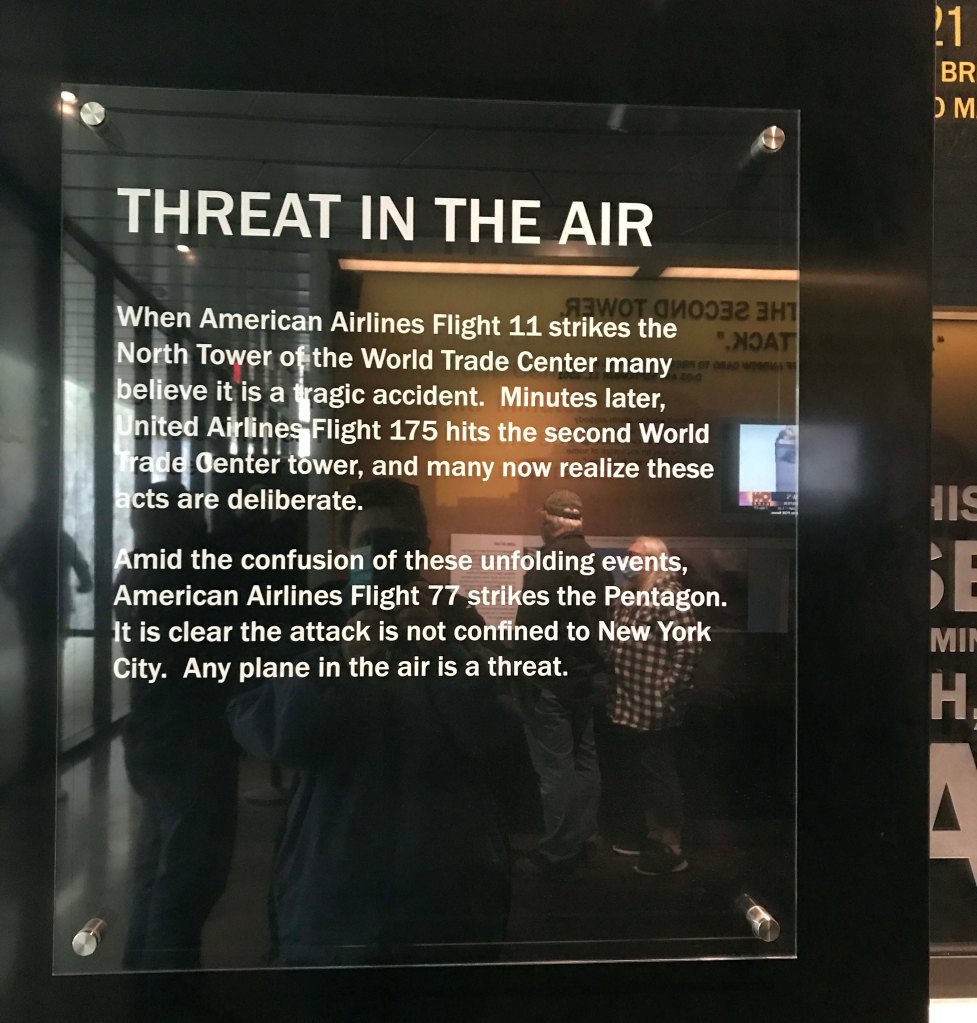 Then it started to walk through what happened on the plane.

What was interesting to me about this flight was it was half empty. the entire back third of the plane had no passengers. I didn’t realize that.  I also learned that the terrorists (grey color) were all in first class.

They also showed the timeline and I was amazed by how quickly it all happened.  Keep in mind the people on the plane did not know what was happening in the world until AFTER they were hijacked and standard protocol at the time for hijackings was for the crew to go along in the hopes the plane would be landed.  Using a plan as a missile was not something the crew was trained for.

It was only 4 minutes between when the captain was notified of possible hijacking and when the plane was taken over. 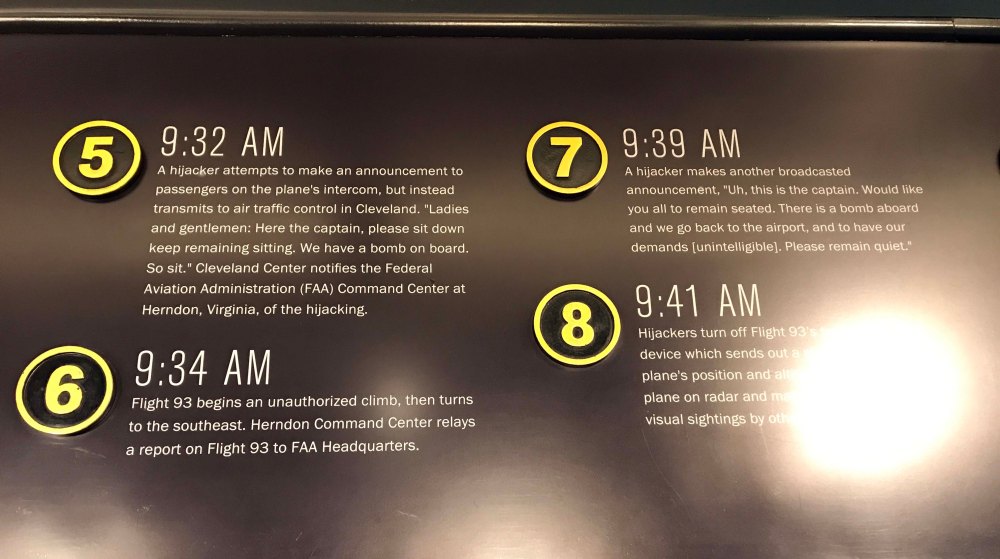 At 9:32am the hijacker attempts to talk to the passengers and accidentally calls air traffic control. That’s when authorities knew that another plane was hijacked. 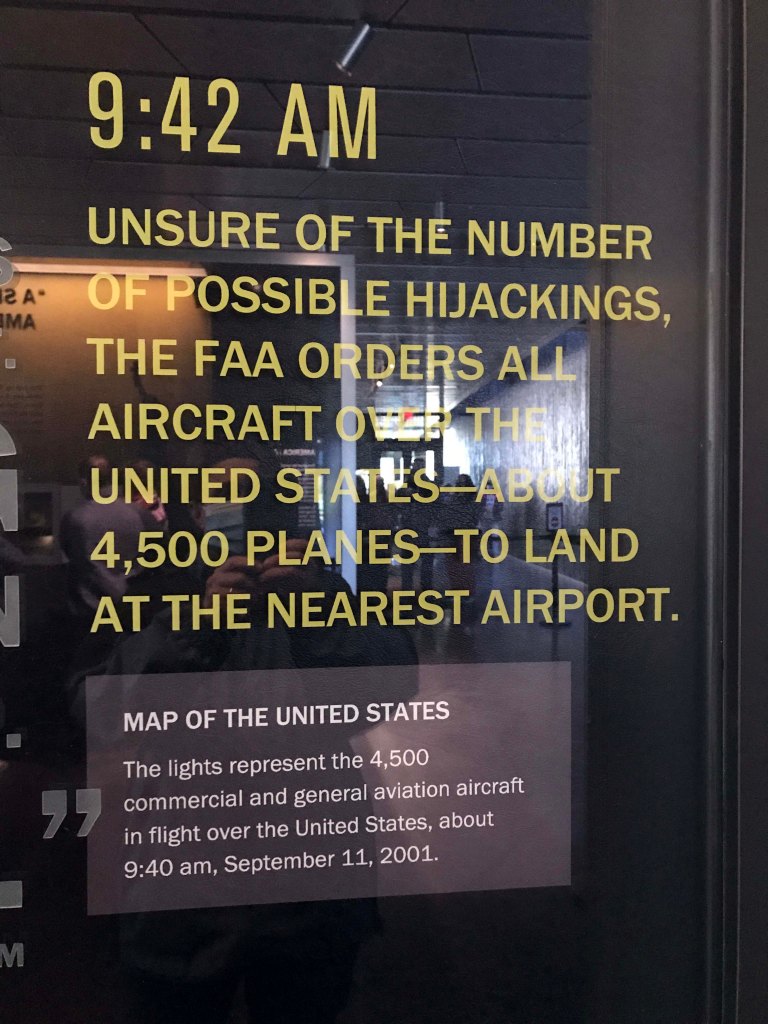 At 9:42am the FAA orders all planes to land at the closest airport.

To understand the complexity of this every dot on this map is an airplane in the sky at the time of the hijackings. Over 4,000 planes were in the air.  The logistical complexity of that is staggering, but they managed to get it done with no accidents.

On Flight 93 the passengers were sent to the back and they learned about the attacks. They quickly put together a plan and decided to do something.

It is worth mentioning that most of the passengers on this plane were middle aged business people. There were only a few younger people and yet they decided to take action. 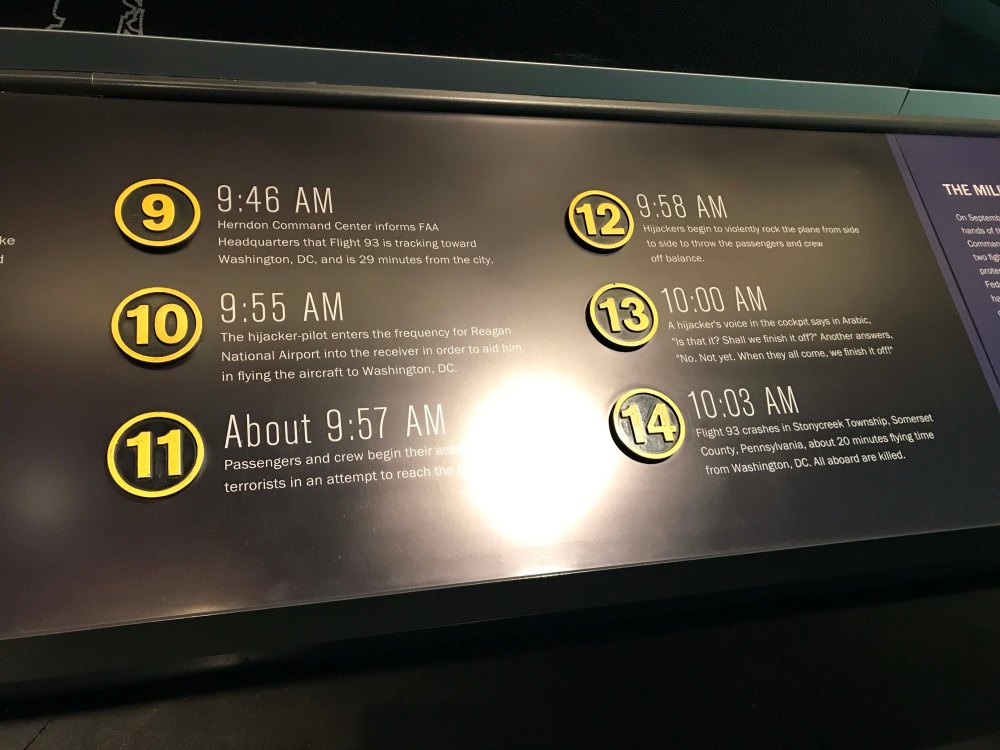 When the plane crashed it was only 18 minutes flying time from Washington DC. Later information pointed to the Capital building (which was in session) as being the target.  As tragic as the day was, how much worse would it have been if many members of Congress had been killed.

The crash was catastrophic and there was very little left. Local farmers and fire fighters rushed to the scene but there was little they could do. 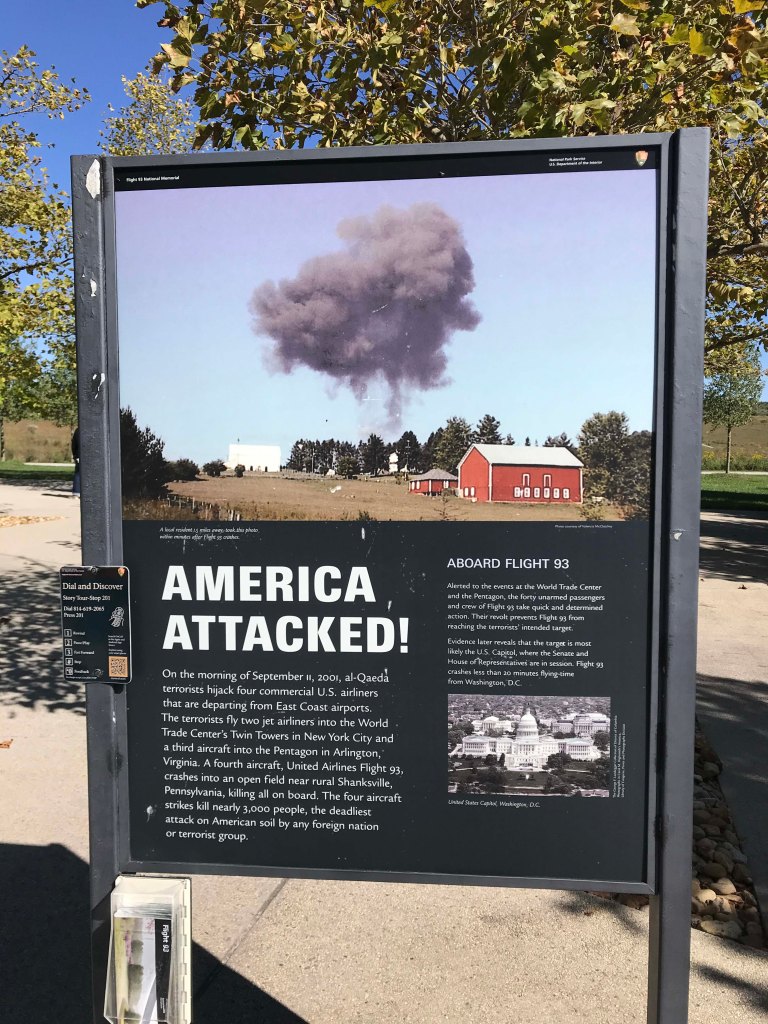 Picture of the smoke as seen from a nearby farm 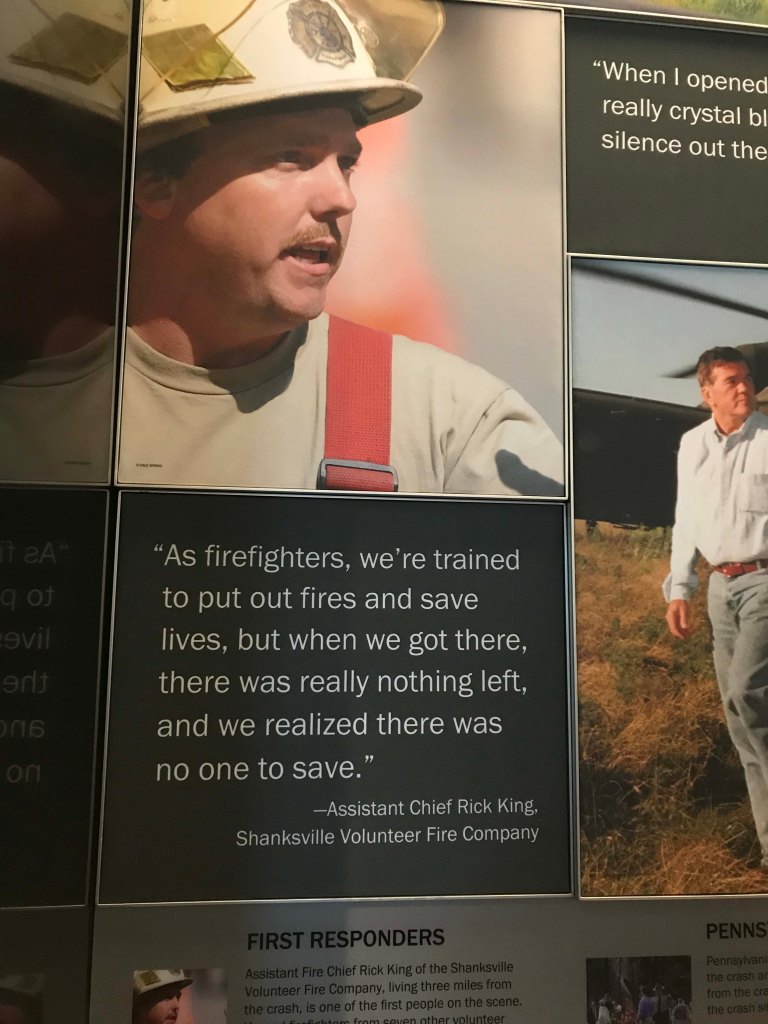 After the crash the FBI setup and conducted one of the longest investigations in history.  I was especially touched by the actions of the local coroner, Wally Miller, who spent several years working with the families to identify remains and ultimately was able to identify every single person.

After the visitors center we talked about walking a large loop down to the memorial site but it was still pretty cold.  Instead we drove down to the lower parking lot and walked beside the field and to the memorial. The natural topography of the area is a bowl with higher elevations to the north and west so the landform provides the circle shape of the memorial; the memorial rests and follows the contours of the circle. The loop path travels clockwise from the Visitor’s Center down to the wall of names in what the architect described as a “circle of embrace” which points your attention down to the crash site which is the final resting place of the passengers and crew. The trees surrounding this “circle of embrace” are missing in two places; first, where the flight path of the plane went overhead (which is the location of the planned memorial overlook and visitor center), and second, where the plane crashed at the crash site (depicted by a ceremonial gate and pathway into the crash site).

A memorial wreath area with benches 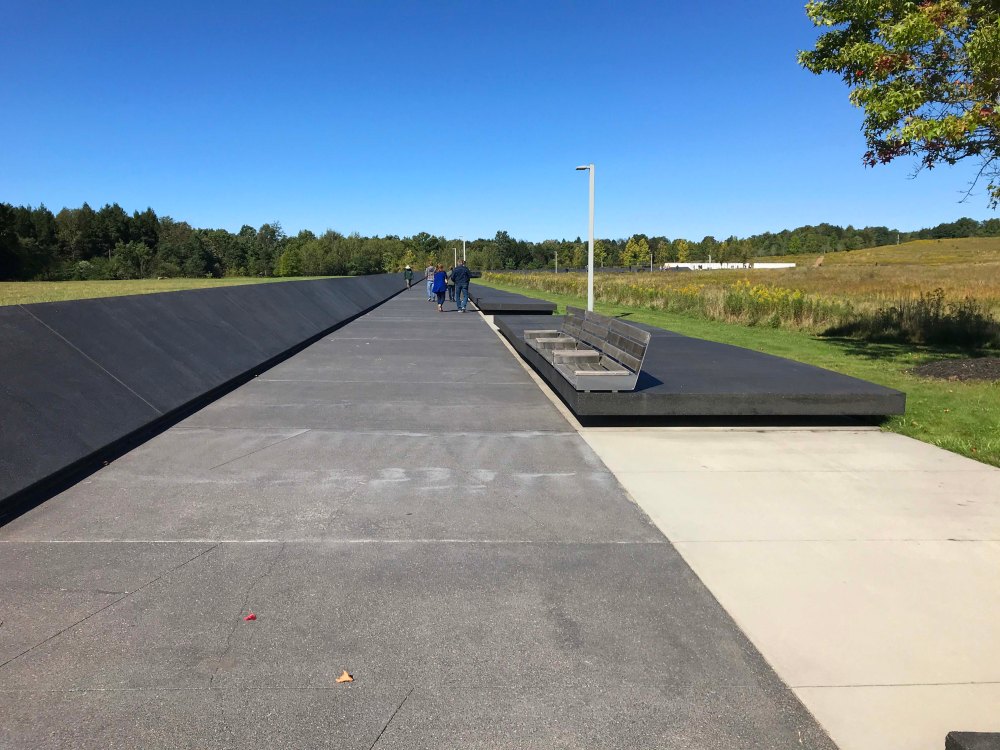 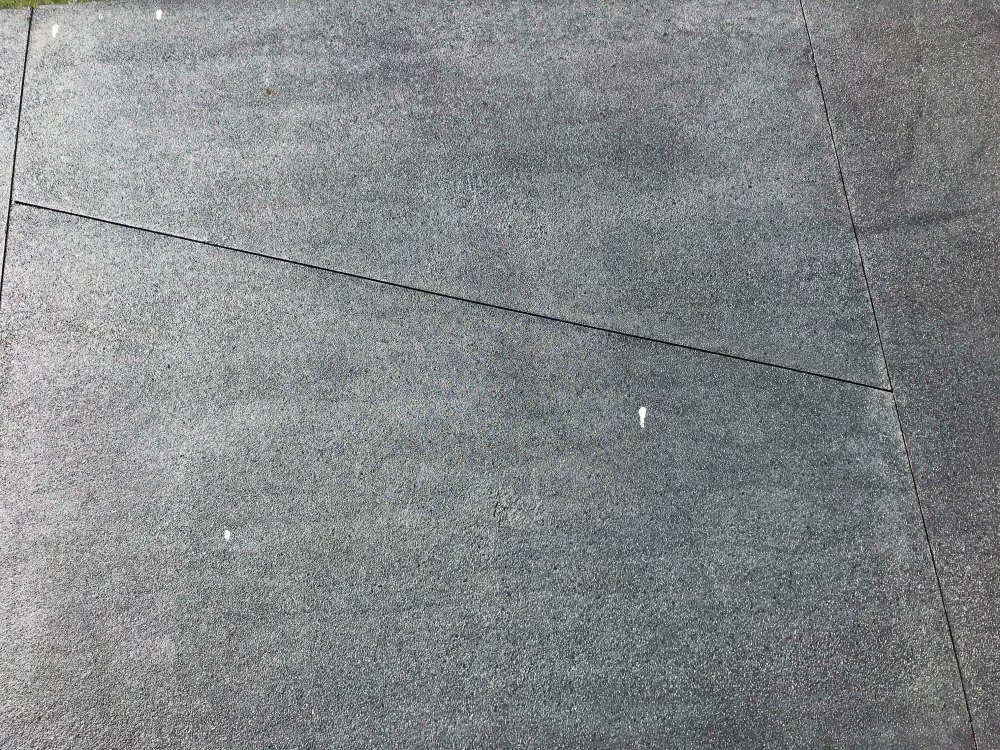 “One of the recurring motifs in the design is an abstracted hemlock tree. The symbolism works on several levels. In nature, the trees are bound together by a shared root system, like the passengers united by their shared destiny. Because the grove survived the fire from the crash, it was seen as a symbol of resilience. ” 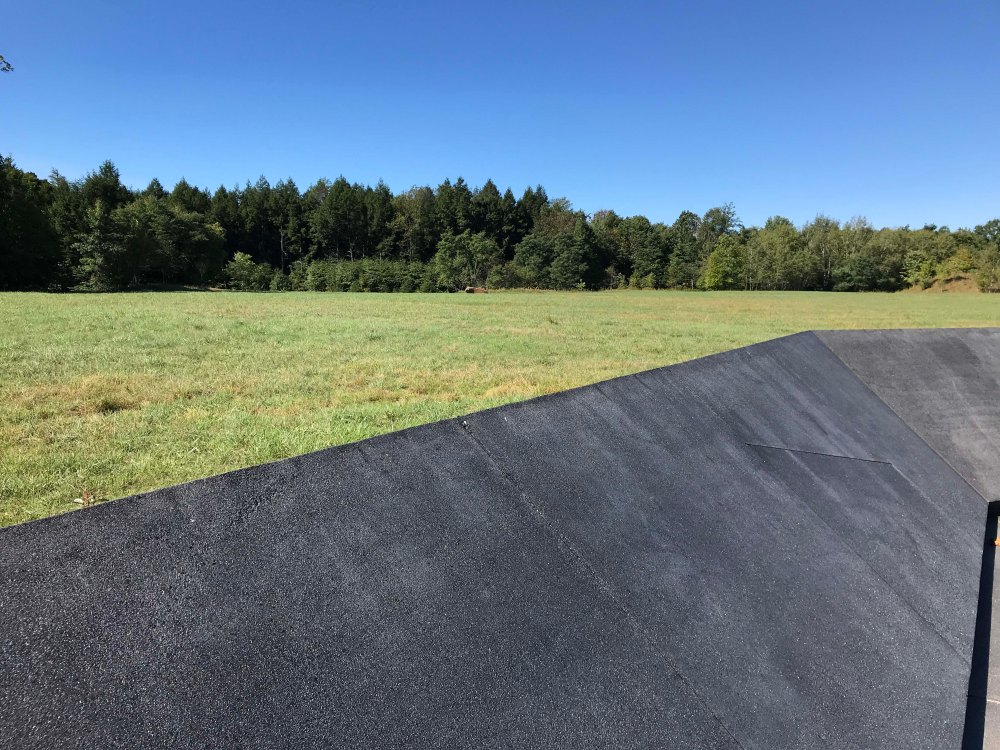 The walls are intentionally slanted to stop people from placing things on them, or sitting on them. The rock in the far picture was placed on the main crash site.

But they did have a few cubbies built in for mementos. 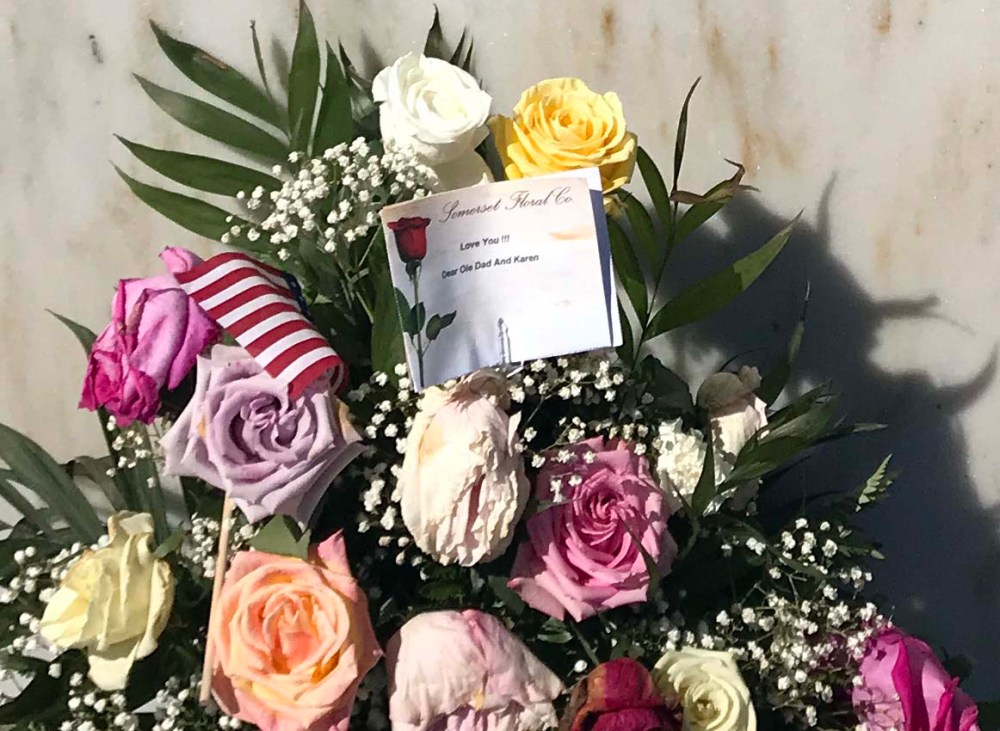 This bouquet in particular really touched me.  From “Dear Ole Dad and Karen.”

The one Japanese member of the plane also had a small stand that had a Japanese flag and some paper cranes.  His mother has visited every year since it happened but this year she could not come because of COVID.  Instead she sent the cranes to an ambassador who placed them for her.  This was incredibly touching.

After spending time in the memorial we headed to one last area the Tower of Voices.  This is a newly installed tower with 40 wind chimes and it was very beautiful.  Unfortunately it was not making much noise even with the wind, so the tuning may not be complete.

I feel very privileged that I was able to visit this memorial and pay my respects to these fallen american heroes.

Ordinary people doing extraordinary things reminds me of why I am proud to be an American.