With all this extra time on my hands I decided to get serious about a craft I have wanted to do for years.  For a long time I have been looking for a US map shaped corkboard and several months back I ran across one for $9.99 at Hobby Lobby.  My goal was to print a picture from every state we had visited and then glue it on the board to make a 3D wall hanging.  This sounds easy, but was more complicated than I thought, as I realized when I first started selected pictures.  I spent hours combing through the pictures I had looking for ones I thought would work with the specific states.  Then I needed to print them out (correctly sized) and I used tracing paper and an X-acto knife to cut them into the right shape.

After many starts and stops I was starting to make progress, but soon realized that the smaller states would be a real challenge.  The bigger states out west were pretty easy but oddly shaped states like Virginia and Ohio were simply not going to be an exact fit.  I knew I could live with that, but was VERY concerned about filling in the gaps and ultimately I had to admit that no matter how careful I was my finished project was going to look like a kids 5th grade school project.

It’s hard to back away from a project after so many hours invested, but if the end result wasn’t going to be worth the hours I realized it was better to just stop.  Plus I had an idea.  We use Adobe Photoshop for our pictures, but I have always known we have barely scratched the surface of what it could do.  I thought perhaps there would be a way to accomplish my goal in Photoshop and asked Lee if he would mind looking into it for me.

This turned out to be more of a challenge than either of us thought but after two days and several hours worth of research he figured it out!  We purchased a template for $10 with all of the states and the larger map and cropped each state into an individual template.

The template we purchased 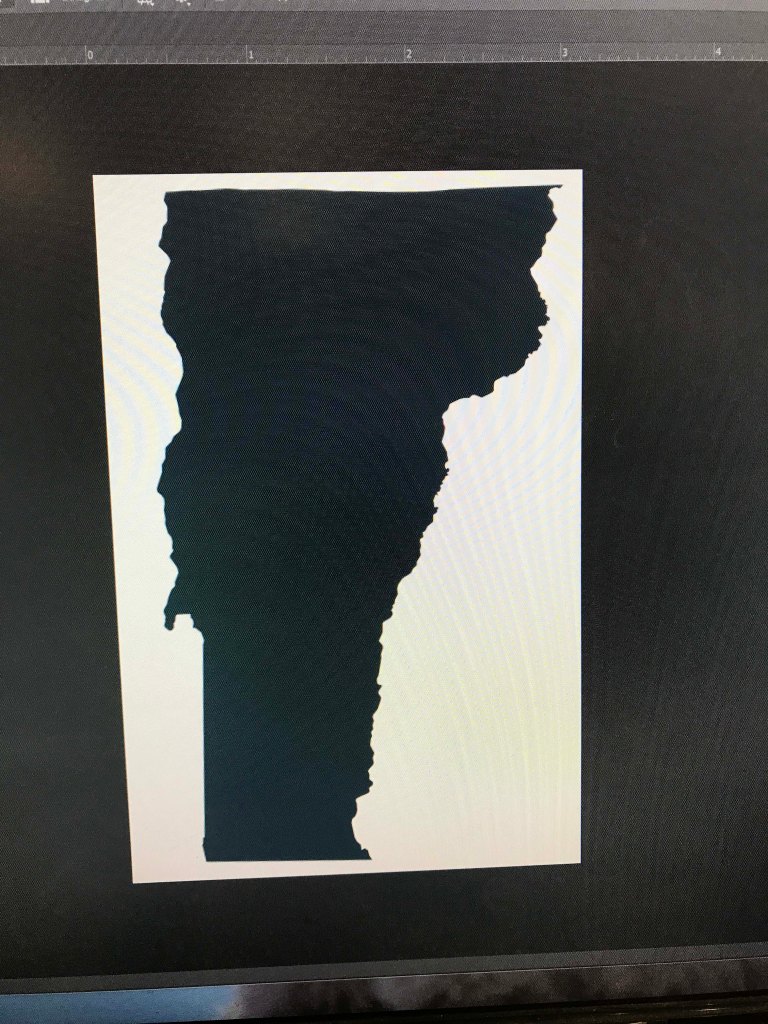 Here is the cropped version of Vermont

Once we had the “mask” of each state I could start putting my pictures in.  This sounds simple but requires multiple steps as you have to make the mask outside areas transparent and then pull in the picture and align it properly.  This leaves you with a picture like this.  (The checkerboard area is transparent).

Once you have the picture, you then pull it onto the larger state map and carefully align it onto the state.  Because you can make the section larger, it makes it a little easier and by scaling and rotating you fit it like a piece to a puzzle.  The only problem is that for some reason the state cut-outs are not an exact match of the states on the larger map.  I know that’s crazy but they just aren’t so I got as close as I could and then use  a cleanup tool in Adobe to fill in the gaps. 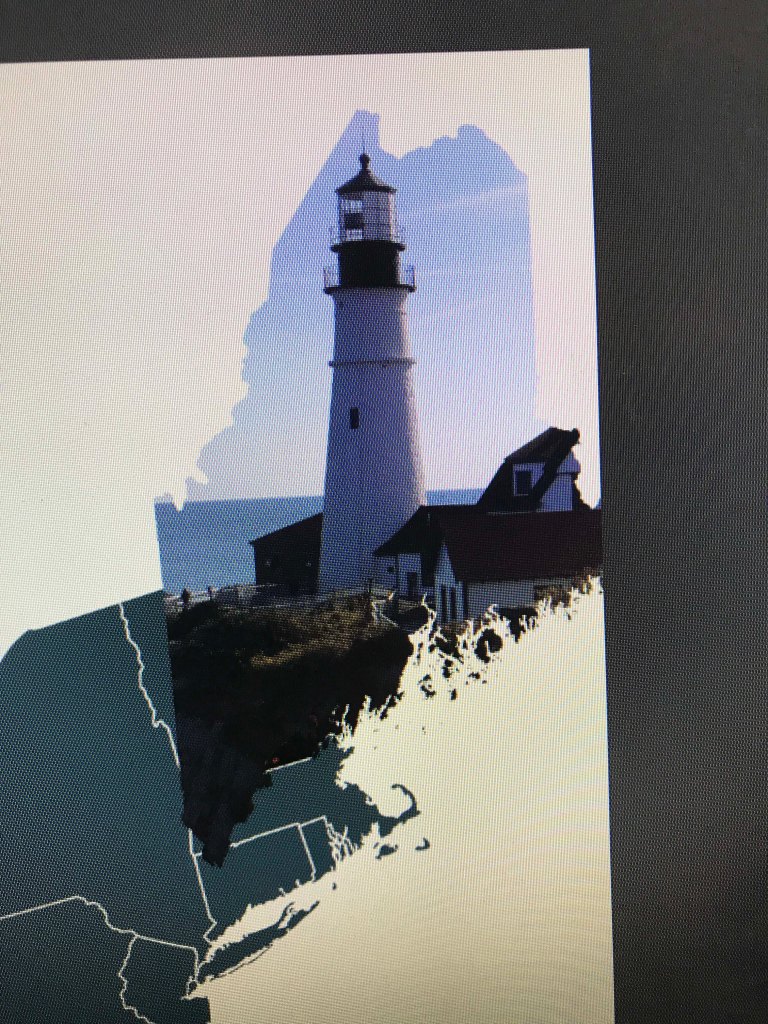 You pull it to the general area and then scale it down and rotate so it fits. 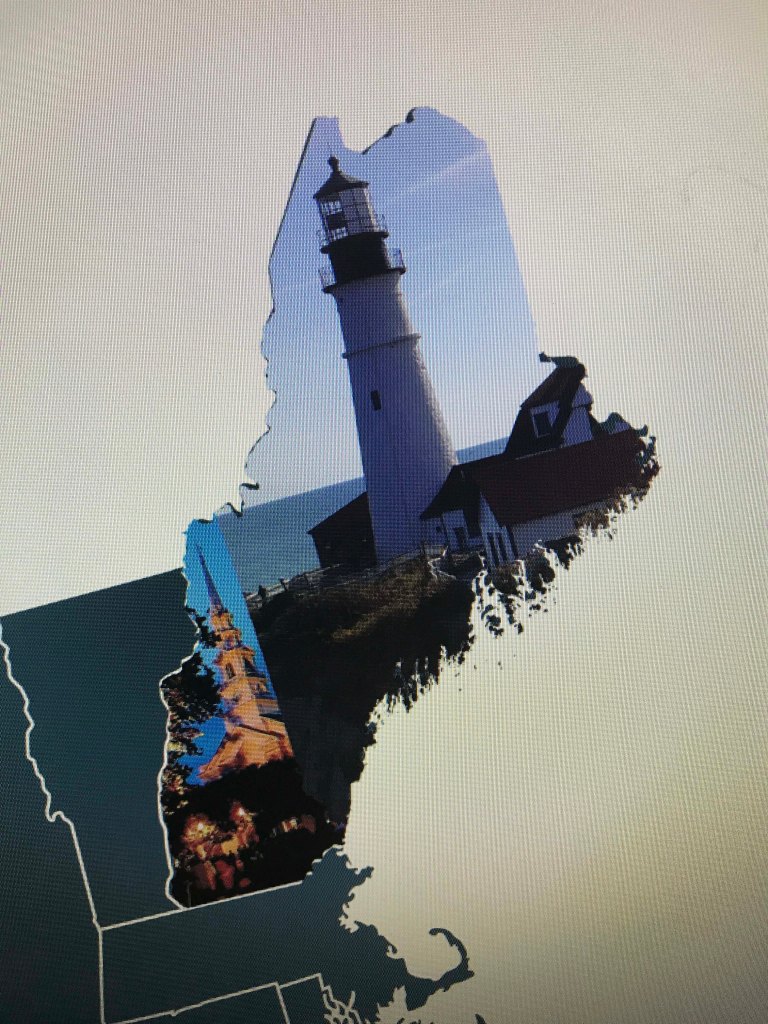 The good news is it is MUCH easier to fit two states together, and even better, if it doesn’t look right you can easily delete a picture and start all over.  Yes it is a bunch of work to start over, BUT you can change just one state.  What excites me about using Photoshop is as we travel and I get better pictures I can change them out and reprint versus with the original plan I would not have been able to do that easily.  Plus the steps get easier the more you do it and I was able to do several states in a few hours.

So far I am pretty happy with the results and once it is done I can either print it on canvas of print it as a poster.  I also like that it has Alaska and Hawaii, which the cork board map did not have.  This kind of project is something I would rarely have time to get up and running, but now that I have the basics I can add to it at any time.  Really grateful that Lee spent so much time helping me get started and feeling good about doing something positive with my furlough time.

Oh and one more thing.  If this is too technical for you, I also treated myself to a Nordic Heritage bundlette pan.  I have been watching The Great British Baking Show and was inspired to try some lower calorie baking. I decided smaller sizes would be helpful with that so invested $28 in this cool baking pan.

I have to say I am absolutely thrilled with the results.  I made lemon cake budlettes first and one box of cake mix makes twelve of these little beauties.  I dusted them with some powdered sugar and lemon zest and they were absolutely yummy.  Plus the smaller size makes it much easier to make the cakes calorie friendly.

They turned out perfect and were only 260 calories! 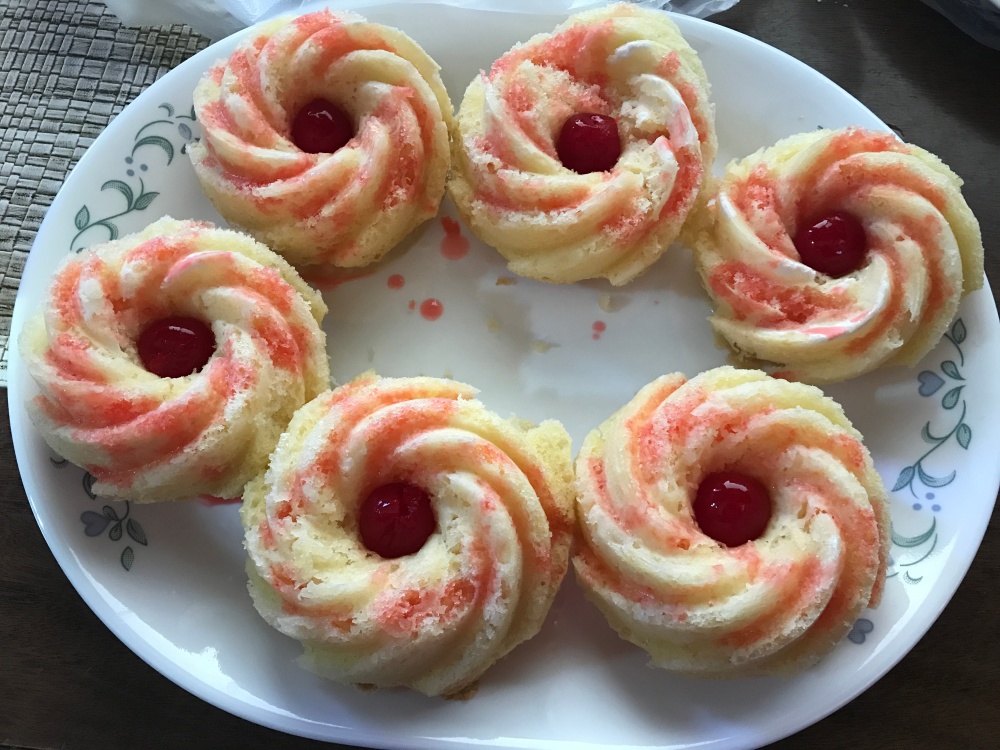 Then I made Pineapple cakes with a pineapple slice under the base and cherry juice sprinkled with a cherry in the middle!

Trying some lower calorie recipes next, but I have to say I am thrilled at the results.  Who knew a little pan could make baking so much prettier? And I definitely feel fancy with my stylish deserts. Once again just glad to be doing something fun with my extra downtime.  And it’s nice to have something pleasant to write about.  Stay safe everyone.

14 thoughts on “Getting Crafty”