Sometimes you look around the space you are living in and think “Something has to change!”.  Those moments can happen whether you are living in a huge house, or in an RV, and for some reason Lee had one of those moments.  Like most RV’s our kitchen has a “wood” floor.  Lee doesn’t like it because he thinks it’s impossible to keep clean and it’s cold.  It never really bothered me, but I was open to talking about carpet, especially because he said he would do the living room as well.  The carpet in the front of the RV definitely needed replaced, so with that in mind we decided to got look at carpet. (I just always think linoleum looks dingy and dirty and dark, and I never want to walk on it without shoes because all I can feel is the grit and dirt, no matter how clean it is. And it’s always, always cold. – Lee) 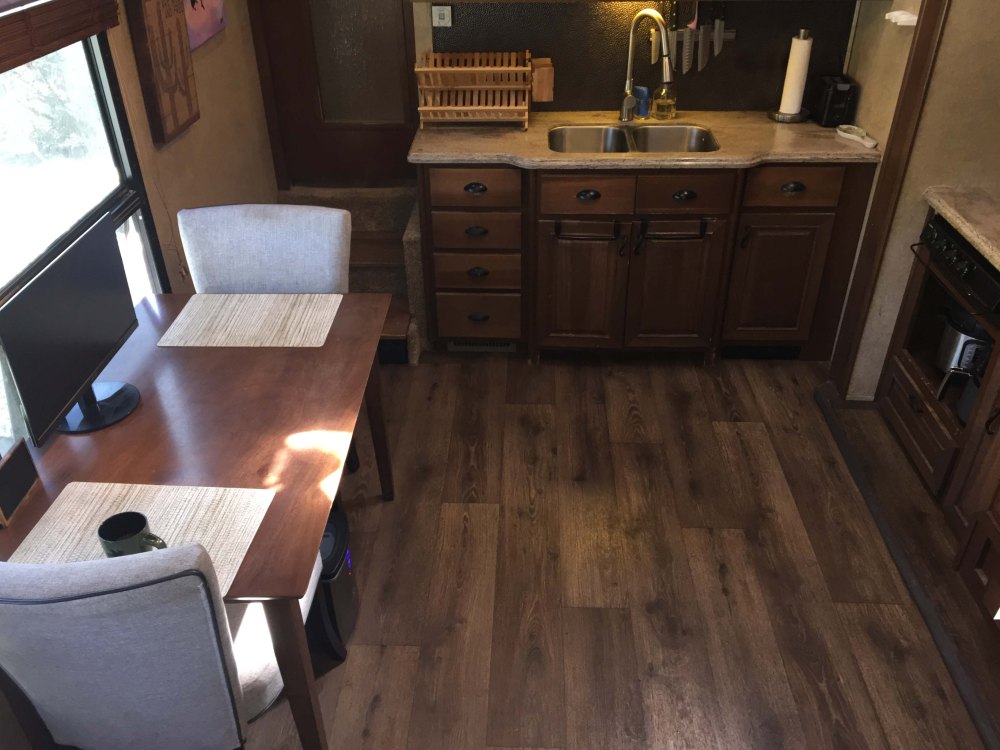 Neither one of us wanted to spend a fortune on carpet so we started by looking at what they had at Home Depot.  We brought home some carpet samples but really I didn’t like any of them. Next Lee went to a regular flooring store and brought back several pieces of moderately priced carpet.  I wasn’t thrilled with any of those either and the prices weren’t really all that cheap.  Since the room size was pretty small I thought we might be able to find a remnant piece of higher quality carpet for a reasonable price.  We both researched what was in the area and found a couple of places in New Braunfels to take a look.

This time though Lee was not going alone so we both made the 45 minute drive to see what they had.  The first place was a fancy kind of boutique and we were both turned off right away.  The second store was awesome though, and had a HUGE warehouse full of remnants of all sizes.  There were several choices that might work but unfortunately we didn’t have all the measurements with us.  At some point Lee had decided he also wanted to do the bedroom and since we were looking at remnants of specific sizes we had to gather information and then drive back and measure.

Once we got the measurements we discovered there were no reasonable priced remnants in a large enough size for all three rooms.  That meant to we needed a remnant for the kitchen that would work with the other carpet and we needed some samples of the furniture as well so the next day back to the store we went.  It is 1-1/2 hours round trip to the store so these trips were long but I needed to see them side by side to know if they would work.

We liked this carpet . Super plush

One of the major differences between adding carpet to an RV versus a house is the slides.  Not only do you have to find a fashion match, but you need to pay attention to thickness, especially in a room where no carpet exists.  Lee felt we had enough space to add carpet in the kitchen, but not padding, because that slide is so close to the floor.  Since that was the case I wanted something that was similar to Berber so it would look and feel more like an area rug.  We spent over an hour mixing and matching until finally I found a combination we could live with.  It was pouring rain by the time we were done, so Lee had to make one more trip back to pick the carpet up.  It was a ton of trips, but ultimately worth it because I found a $400 piece of carpet for the kitchen for $110.

Thankfully we had help carrying it and a place to put it and cut it. We could have put it in our RV but it would have been tough. 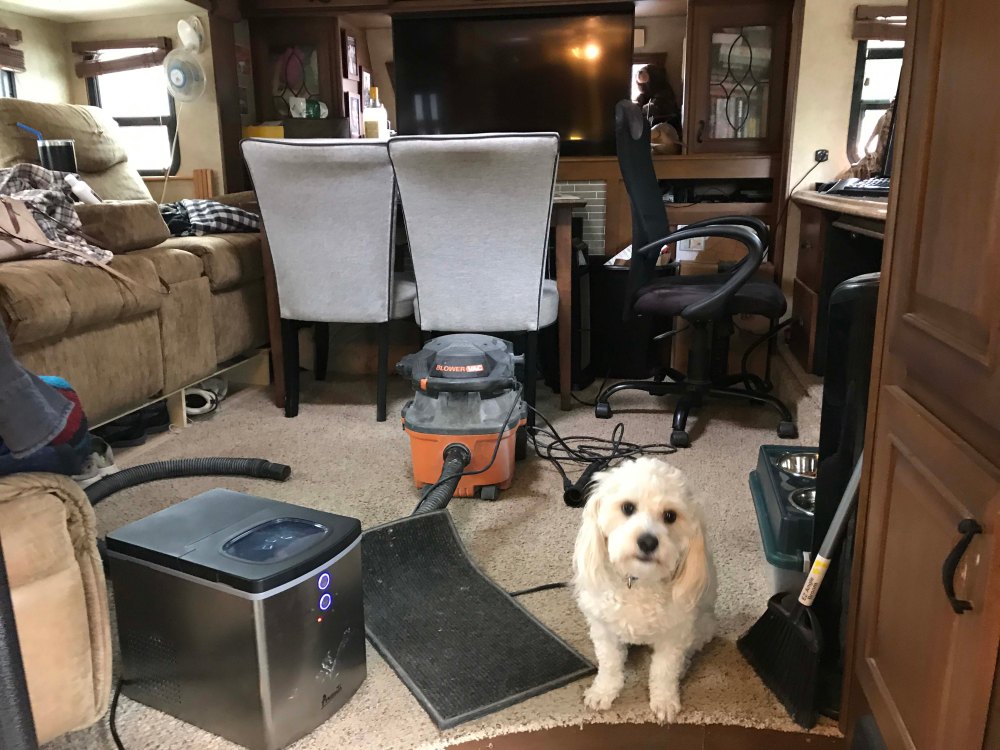 The first step was to move everything out of the kitchen and into the living room.  It would have been hard to have the carpet in there as well.  The dog seemed confused.

Lee was really nervous about cutting the kitchen piece because it barely was big enough.  Plus he needed to make some circular cuts which aren’t easy under the best of circumstances.  I’m happy to say it all went well though and he did a fantastic job.  See for yourself. 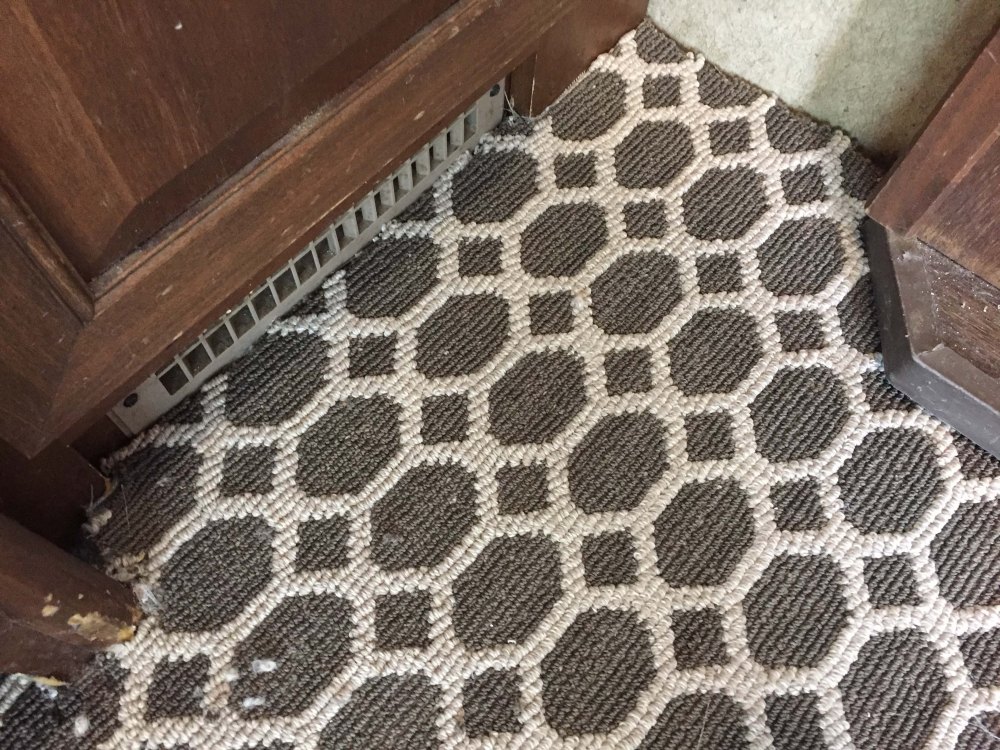 This section was really tough 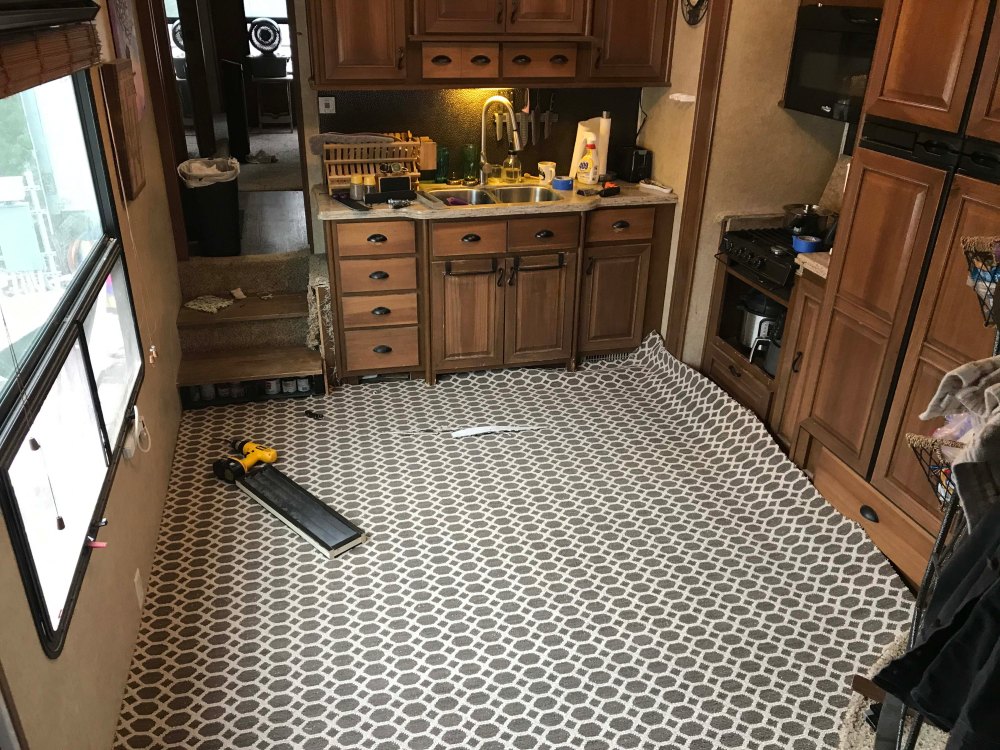 Before the carpet was under the slide. We were a little nervous about how it would work, but figured for $110 if it didn’t work we weren’t out that much money

The carpet went under the slide just fine. We didn’t have room for padding but with this carpet it really isn’t needed!

We breathed a sigh of relief when the carpet passed the slide test!! 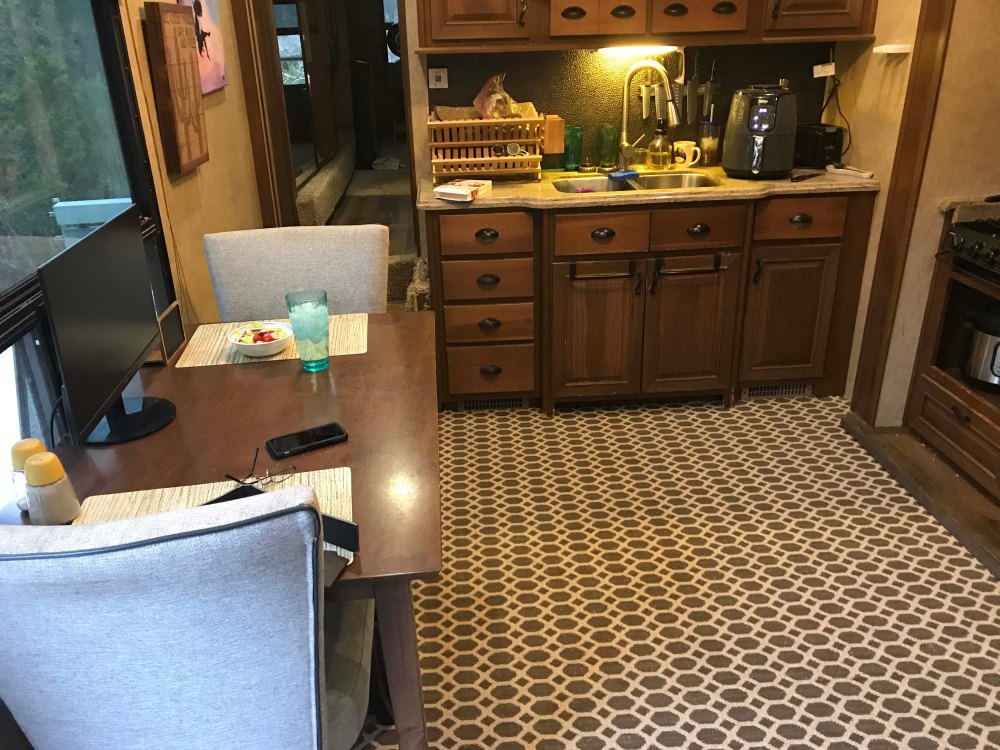 Voila!! The room was done and I loved the carpet!!!

Here are some before and after shots for comparison:

The floor is clean and warm, and it really brightens up the room. Happiness all around!

Of course as soon as the carpet was in all I could notice was how my chairs no longer matched.  They are grey and I love the chairs (one is my work chair) but they have gotten stained.  We talked about options, but before I went the upholstery route I decided to look at chair covers.  My only experience with covers was when I was very young and in my experience they always looked awful and never worked well.  It didn’t hurt to look though, and I was surprised to see several affordable options on Amazon.

Ultimately I decided to pick up some Northern Brothers Chair covers.   They only cost $14.99 for a set of two, and appeared to have some texture in the picture so I thought what could it hurt?  Everyone thought they wouldn’t work, but it turned out everyone was wrong 🙂  They wrapped on my existing chairs beautifully and gave them a nice facelift.  Also they are washable so in future if they get stained it will hopefully be an easy clean, and if not, $15 to replace them is pretty cheap! 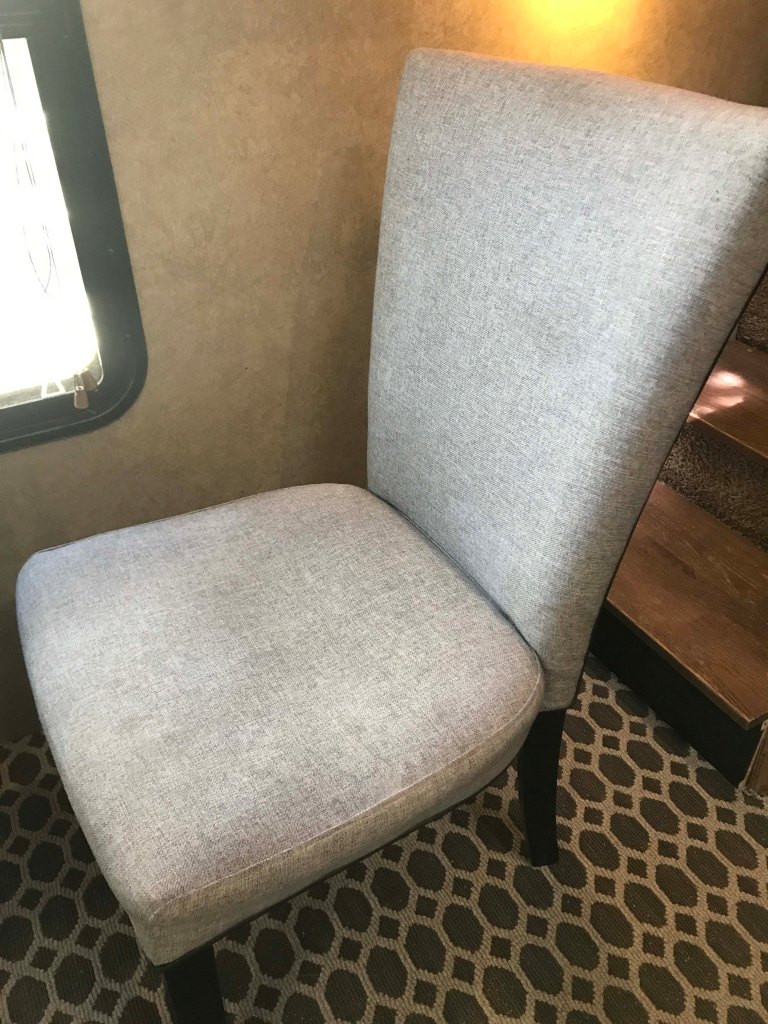 Putting the slip cover on

Side by side comparison. The one on the right is the new one!

I was thrilled to be able to contribute something to the effort and the kitchen was complete!!  Next up is the living room which I will talk about in the next post!