You probably know by now that I love seeing how things are made, so when I learned that the only tea plantation in North America was nearby I knew I wanted to go.  Since part of the tour was outside, I was a little worried about having a day nice enough, but Saturday was gorgeous with blue skies and temperatures in the 70’s.  Charleston Tea Plantation is on Wadmalaw Island and has a really interesting history.  The tour of the factory is free (along with an awesome gift shop), but the trolley tour of the fields is $14.  I found the tour very interesting and well worth the fee, but you can certainly skip it and just check out the free portions if you would like.  It’s definitely still worth the visit. 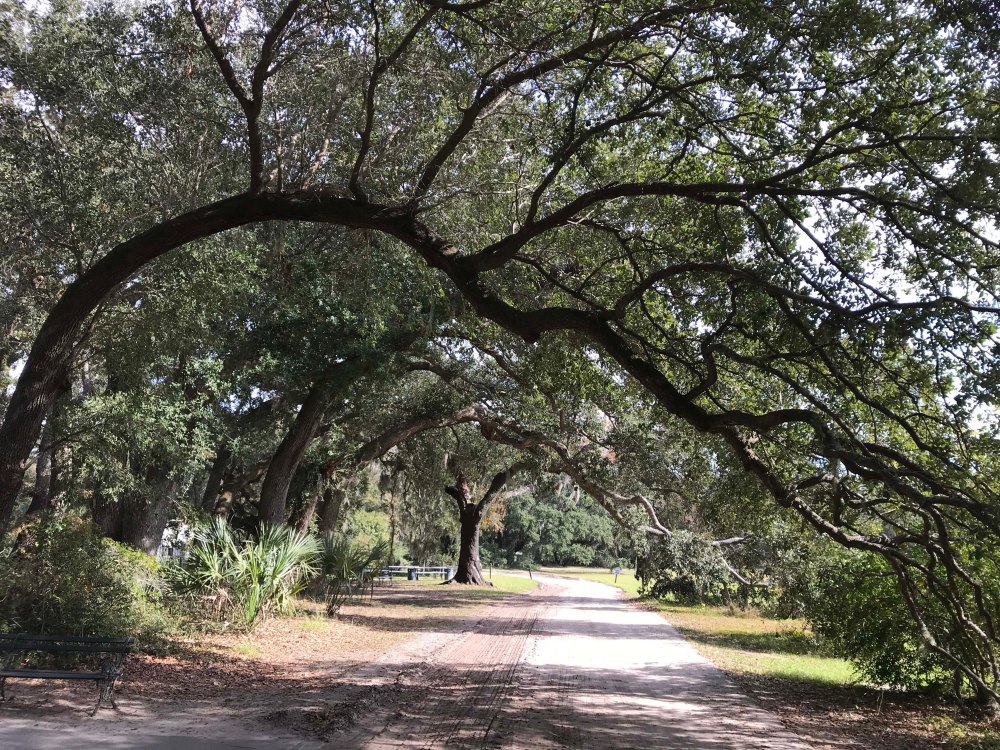 The oak trees were absolutely gorgeous. One of them was 250 years old. 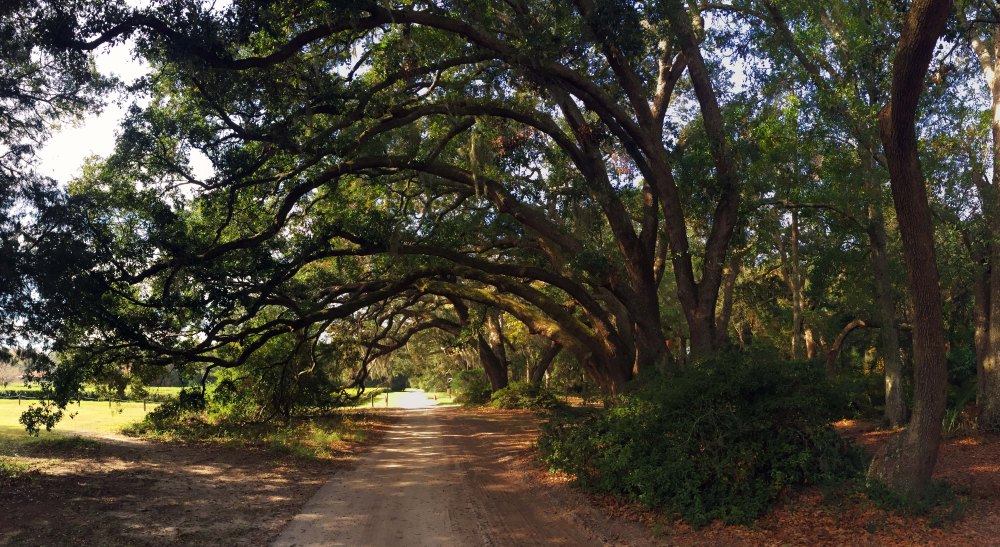 The tea plants that you see when you drive in are the oldest on the plantation.

In the 1880s the Pinehurst plantation brought tea plants from China and grew them in South Carolina.  Eventually the plantation changed hands and the tea plants grew wild.  The weather here is  near perfect for the tea plants to grow, with lots of rain, heat, and sandy soil.  Tea is an evergreen plant and there are actually plants in China that are over 600 years old.  Since there are no insects or animals anywhere in the country that eat the leaves (they don’t like the caffeine) insecticides and fungacides are not needed.  The only reason tea didn’t completely take over like kudzu is that the root system is interconnected and it doesn’t like soggy roots.  Enough of the tea survived that in 1963 the Lipton Tea Company was able to grab some cuttings and transplant them to Wadmalaw Island. 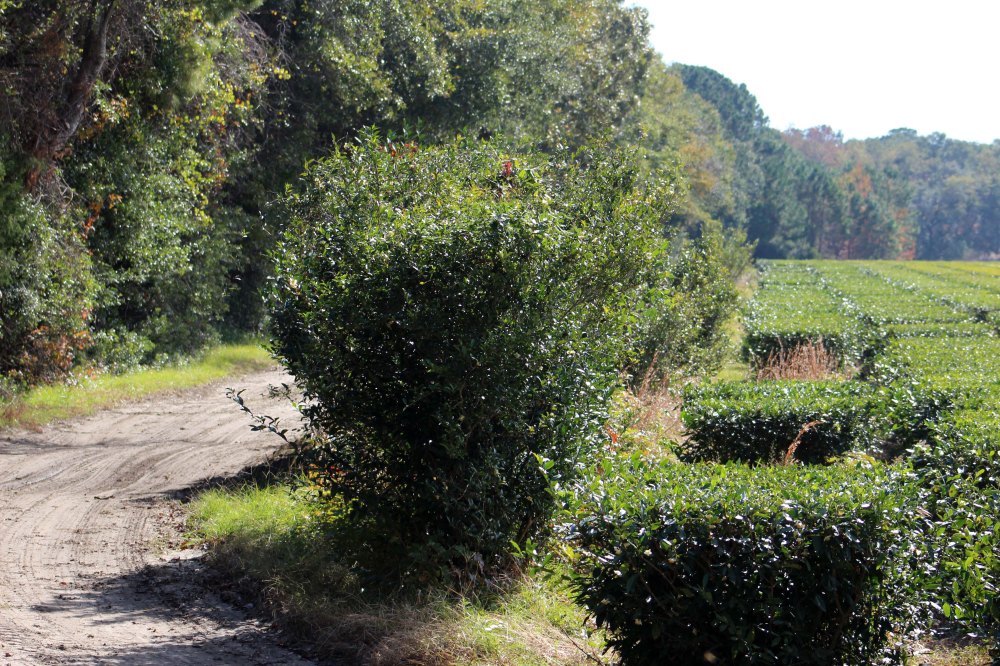 The bush on the left shows what a tea plant looks like when left to grow in the wild. They get about 20 feet high.  I have been drinking tea my whole life and had no idea it was an evergreen or grew like a bush.

The Lipton Tea company bought the 127 acres as a research facility because the Cold War had them nervous.  They bought all of their tea from China and needed to know if they could grow it in the US if trade stopped between the two countries.   The tests were successful, but ultimately they didn’t need a US supply and once again the plantation was up for sale.  Canadian Bill Hall decided to buy the plantation and see if he could make a business out of it.  He is not a dabbler, but rather an expert in tea who went to school for four years in London to learn all about it.  I didn’t know they had school for tea but it makes sense, especially in England. 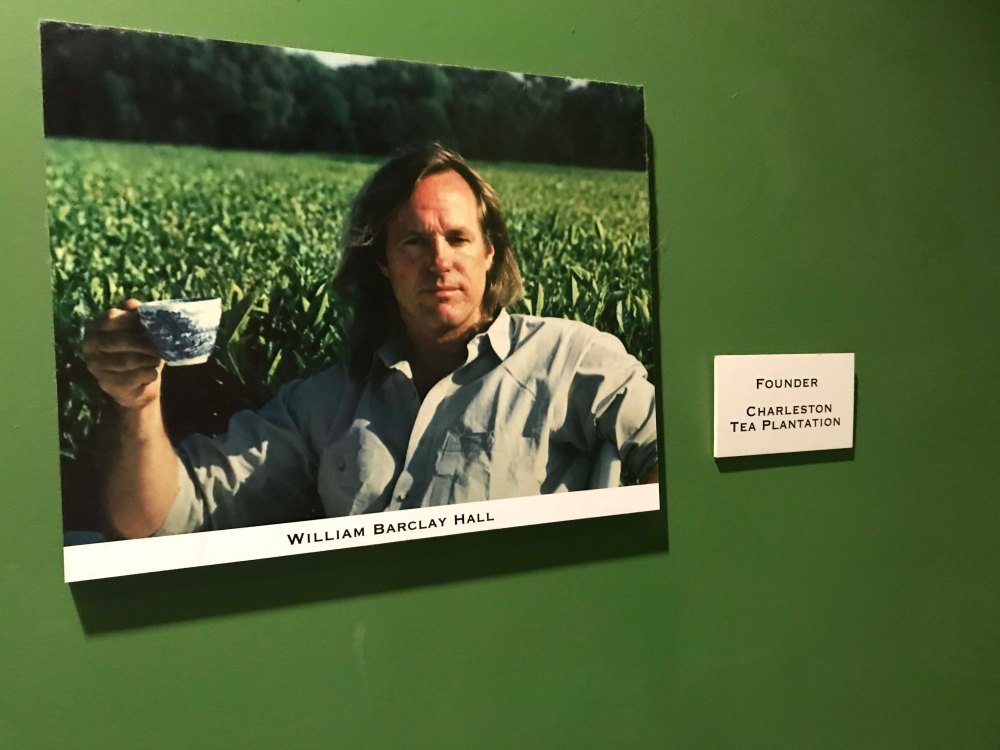 Aerial view of the plantation

They hand built the only mechanical tea harvester in the world.  That’s why the bushes look so even. 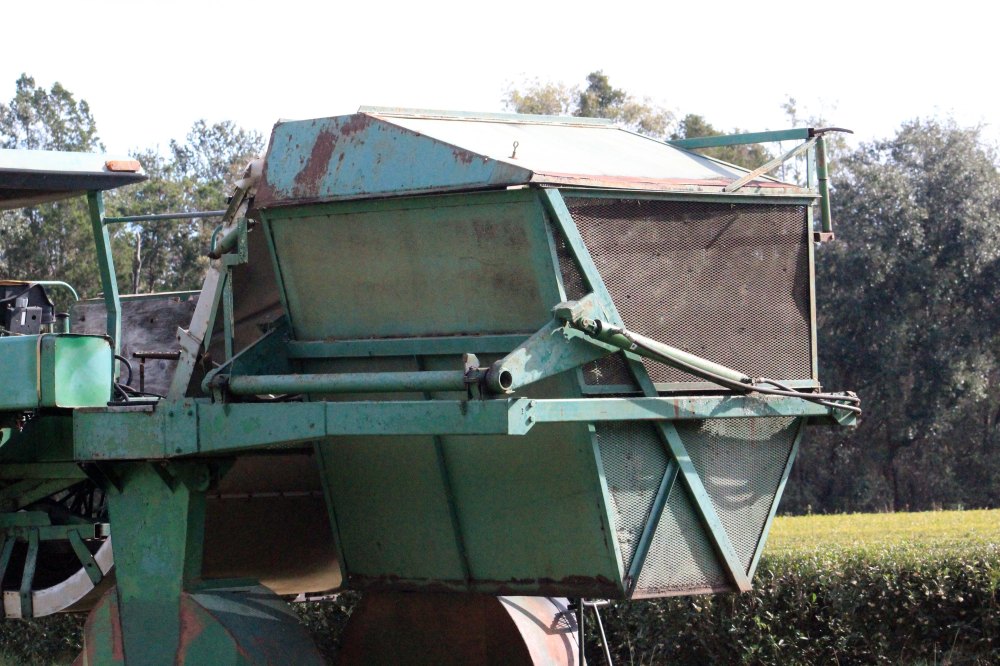 The tea leaves go in this hopper.

It’s a super cool piece of american ingenuity.  They harvest every 21 days from May to October which is usually 9 cuttings a year.  This year the bushes haven’t gone dormant yet because of all the rain and they got 11 cuttings.

Ultimately Bill realized he needed more investment to really make a go of it, so he merged with Bigelow Tea.  The small manufacturing area is really interesting and those tours are free. We visited on a weekend so the machines weren’t running, but they had a series of video screens that had excellent clips showing what each machine looks like when it is running.

The tea comes into the wire mesh withering bed where it sits for 18 hours.  They process 5,000 pounds of leaves at a time and 12% of the moisture content is removed in this process.

These giant blowers circulate the air.

Next it goes to the rotovane to rupture the cells. This releases more liquid.  Tea leave start out as 80% liquid and the multiple processing steps ultimately remove most of it.

The oxidation bed determines which type of tea is created . This is where the leaves turn from green to brown . Black tea is 50 minutes in oxidation bed. 14 minutes for Oolong tea. Green tea has zero time. It is steamed right from the field to stop oxidation.  I was fascinated by this.  Again, been drinking my tea my entire life and I always though it was different kinds of tea leaves. 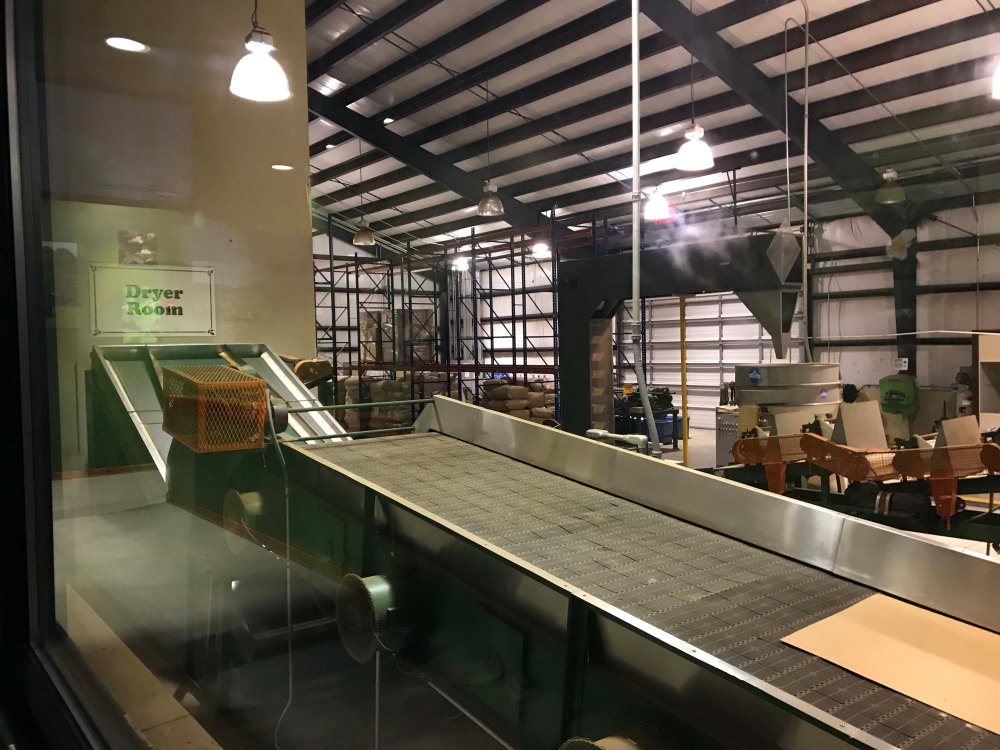 The dryer seals the flavor.  When it is done the tea has lost 97 percent of moisture and 80 percent of weight. Every 5 pounds of leaves yields only one pound of tea.

Up until this point I was thinking how this process can be done manually.  Tea has existed for at least 4700 years.  The last step though was all 20th century.  They pass the leaves through a sieve to get rid of stalk and fiber and use static electricity to remove any stalk or fiber that is lighter than tea.  I have drank tea that was manually processed and it always was more gritty than processed tea.  Now I know why.  After touring the plant we went out to wait for our trolley tour.  There are some nice grounds where you can eat and view the tea and those are totally free.  Oh, and did I mention tea is free!!  They have multiple flavors of  iced and hot to try and you can take your tea anywhere on the plantation. 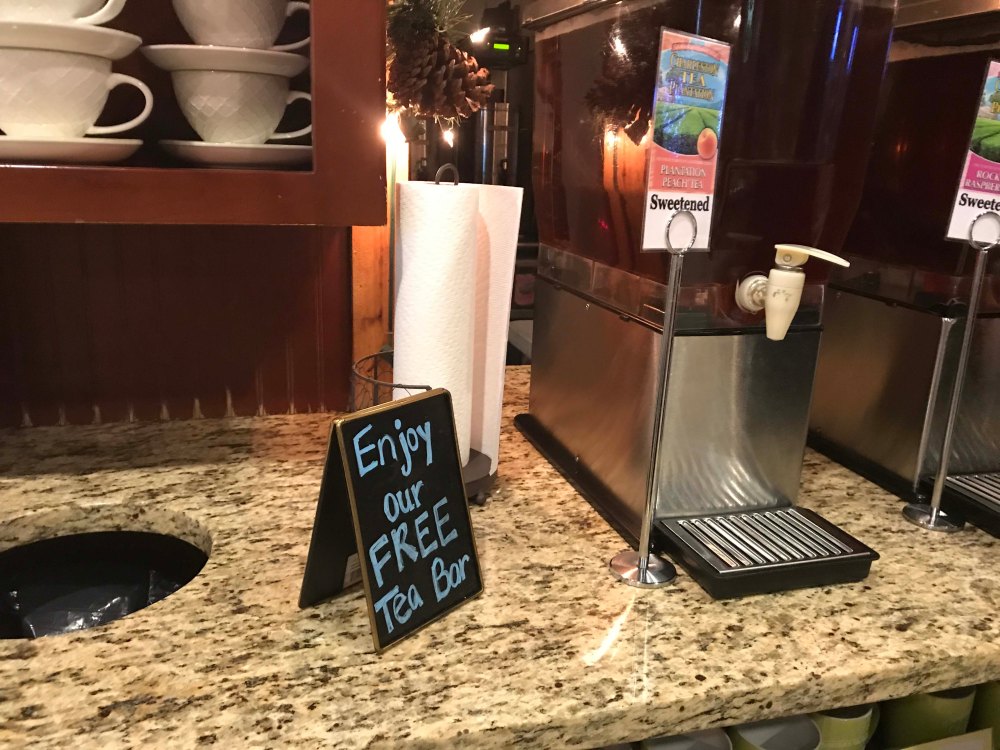 Who doesn’t love a giant frog who drinks tea 🙂

The trolley tour was really interesting and our tour guide Alan was great.  I will warn you that this is a non-climate controlled vehicle so I would definitely pay attention to the weather before going.  It got a little warm in the trolley as we were going on our tour and personally I would not like to do it in the summer heat. 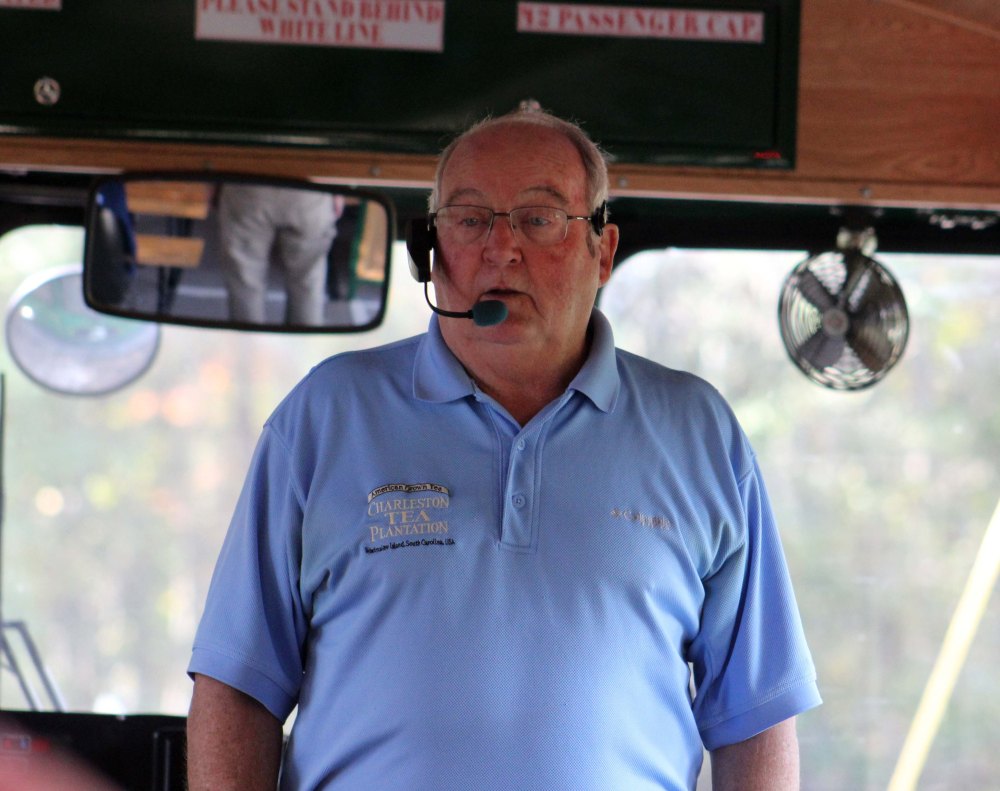 Allen was very nice and knowledgeable.

One of our first stops was the greenhouse where they grow the cuttings.  They never grow from seeds because they want to keep the strain pure and instead make cuttings which they grow in a greenhouse.  It takes 3-5 years to grow the cuttings and they live in completely temperature controlled settings during that time.  Once they are ready they are transplanted into a new field. 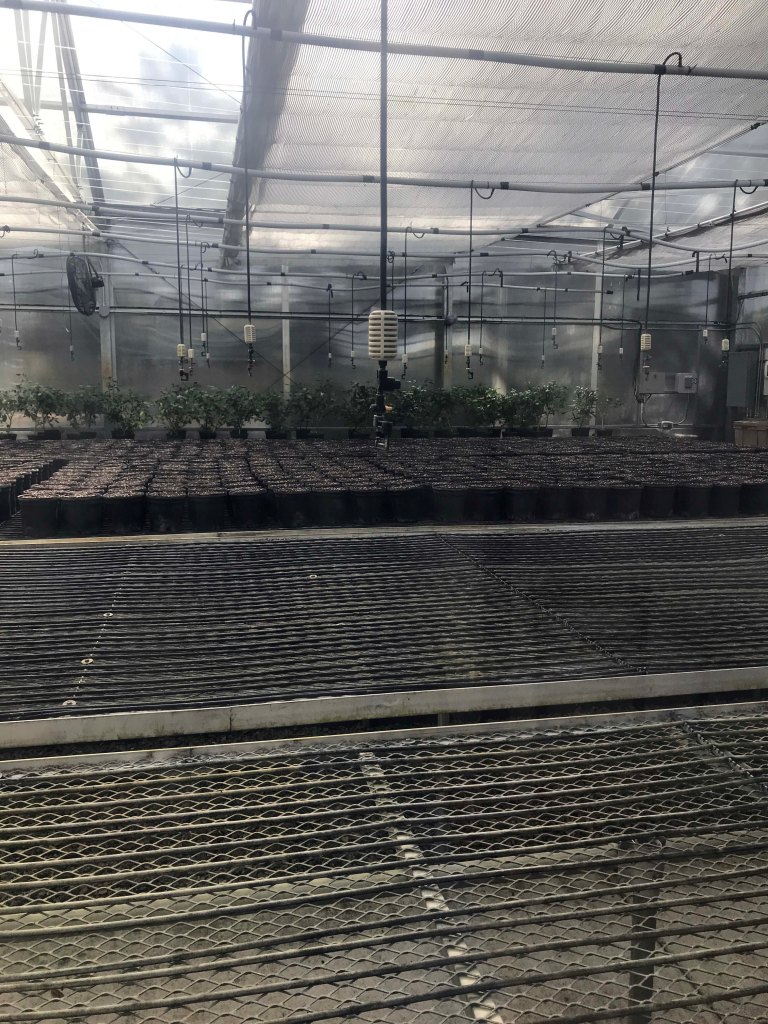 All of the plants here are related because instead of using seeds the plantation only uses cuttings to make clones. So they know the genetic makeup of every plant. They don’t change the soil because that is what sets the flavor . In March they will fertilize if needed with hard dry pellets.

They use these plants to start a field a year unless there is a hurricane.  Most years the planting go fine, but occasionally there are issues such as ice storms. Each field holds roughly 25,000 plants.  The picture below shows seedlings that were impacted by an ice storm.  That’s why the growth is uneven.

One of the most interesting things to me was the fact that the root systems become interconnected in the hedge rows.  Despite their need for lots of rain the plants don’t like soggy roots, so they put drainage ditches in between the rows.  There is also an irrigation system for dryer years.

Mosquitoes can be a problem but they use natural ponds with fish and frogs who eat 85% of the mosquitoes.

Occasionally there is a dip in field and they get root rot in the middle.  That’s what the brown patch is in the middle of the field.

They can’t cut the bad section out because the roots are interconnected, so they just leave it for 2-3 years then cut the woody stems off.  Eventually a new shoot will usually start but this whole process takes several years.

Right before the plants go dormant they flower and the place fills with butterflies. It was a little late this year so we were just seeing the beginning of that. I’d love to say I planned this shot with the bee flying through it but it was sheer dumb luck 🙂

As much as I loved the tour the best part was the gift shop.  It was full of really great items and many of them were camper friendly.  I loved the plastic tea caddies and also the difference containers of tea.  They don’t have any decaffeinated tea BUT if you put the tea bag in hot water for 30-40 seconds it naturally removes 65% of the caffeine.  When I learned the decaffeinating process involves washing the leaves in acetone and formaldehyde I became VERY interested in the natural process.

I used to collect teapots that look like other things. Gave that collection up when we went on the road…but I still wanted to buy several of these. I controlled myself 🙂

One last thing.  Every year they have a festival when the “first flush” happens.  This is the first harvest after dormancy and from what was said makes the best tea.  I would like to try this at some point to see if I agree, so if you are in the area in May see if you are there during the festival.

After visiting the plantation we decided to eat lunch.  I am a huge fan of the small seafood shacks on the islands and I found one called the Roadside Seafood on nearby John’s Island.  It was a no-frills kind of place and the seafood was very fresh.   Lee got adventuresome and had a taco duo of gator tail and shark bite.  I had shrimp and I loved their coleslaw.

Great lunch special which we both got 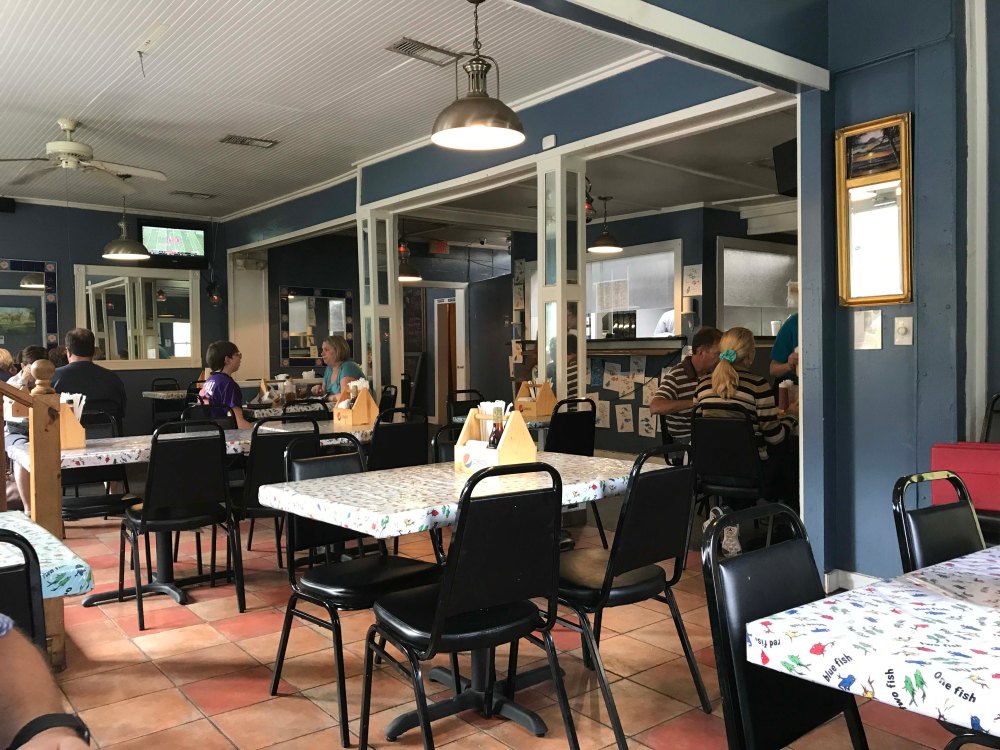 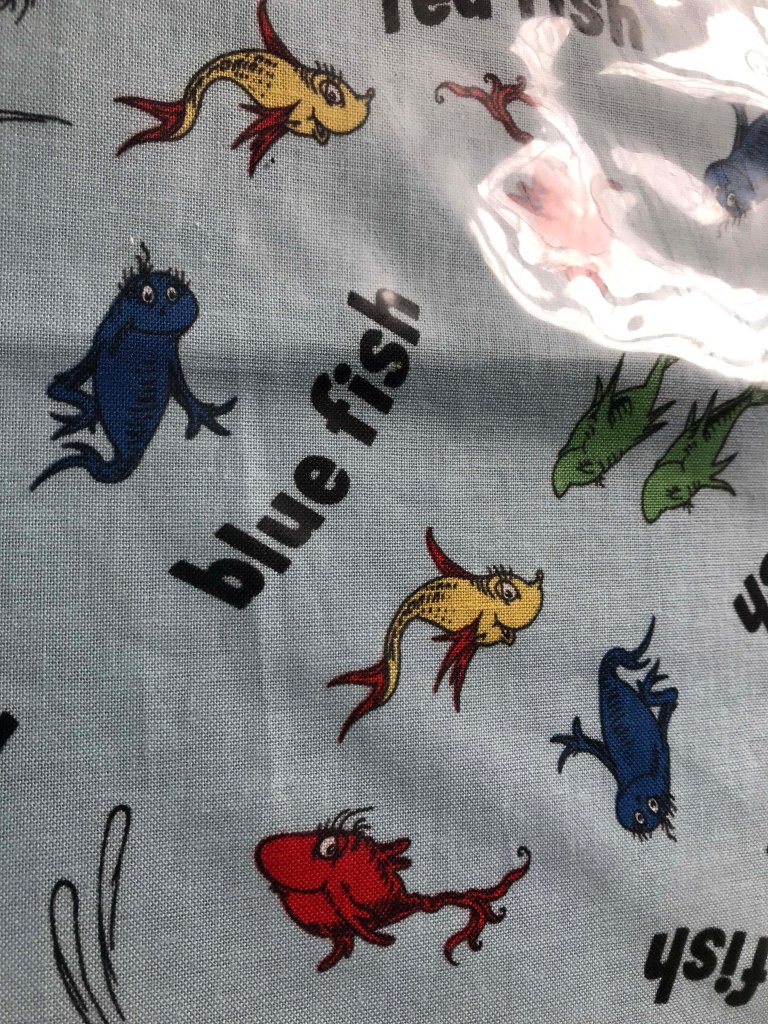 The tablecloths were so cool with the Dr. Seuss characters 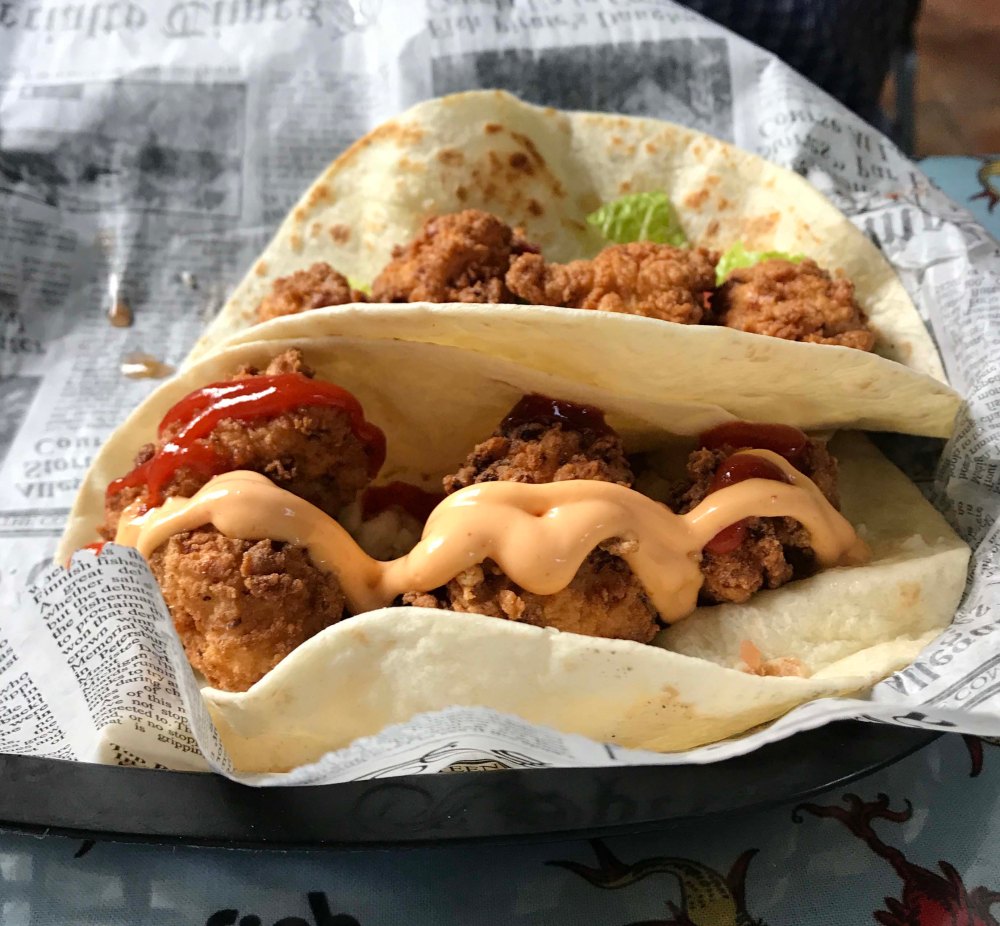 and mine…the portion was perfect!

4 thoughts on “First Time at a Tea Plantation”