A few things you should know about Goblin Valley before I show you the pictures.  First, the  “Goblins” are actually hoodoos, they are just called something different by the locals.  Second, this whole valley was near an ancient sea which may account why there are so many of them in a concentrated area.  Third, you simply cannot take a bad picture here.  It was amazing and other wordly.

Did I mention part of the 1999 movie Galaxy Quest was filmed here, because it looks like an alien planet? (It’s actually surprising that more movies haven’t been filmed here, considering the unique look. Prior to the film, access to the park from the nearest highway was a dirt road. The fees the production paid for filming at the park paid for paving the entire access road. If you’ve never seen the film, it’s really a lot of fun, especially if you grew up in the 60’s or 70’s, or are a Sci-Fi fan. Useless trivia; it was the film debut for Rainn Wilson of The Office, and Justin Long, of the “I’m a Mac/I’m a PC commercials. – Lee) Here’s a quick edit that Lee did of the best shots from the movie that were filmed in the same valley that we walked in –

Lastly, it’s not so much a hike as a “wander”.  There are no set trails, and you can get up close and personal with the goblins.  We loved it, the dogs loved it, and kids would love it.  It’s a special place and I highly recommend visiting, despite it’s remote location.

View from the parking lot 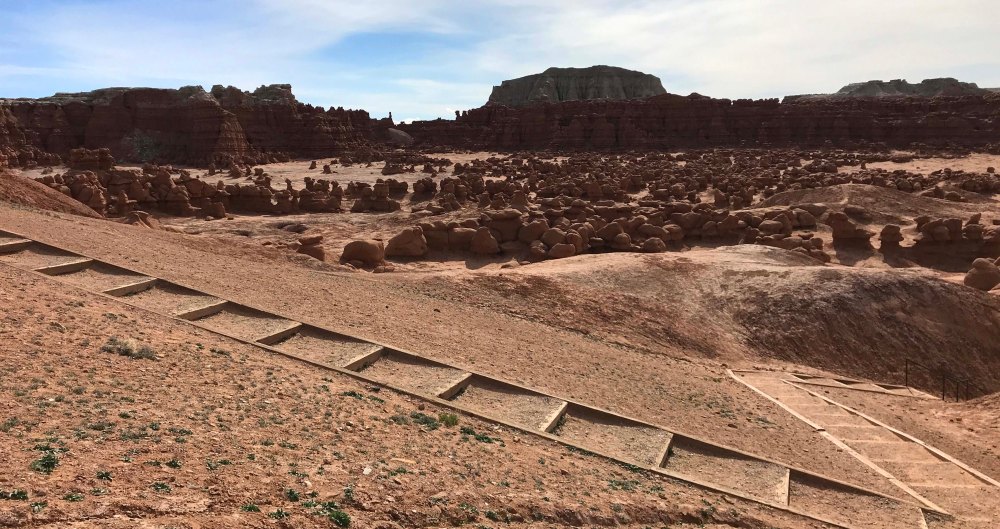 Initially we kept the dogs on leashes but when we got further back we just let them go.

And they had a blast 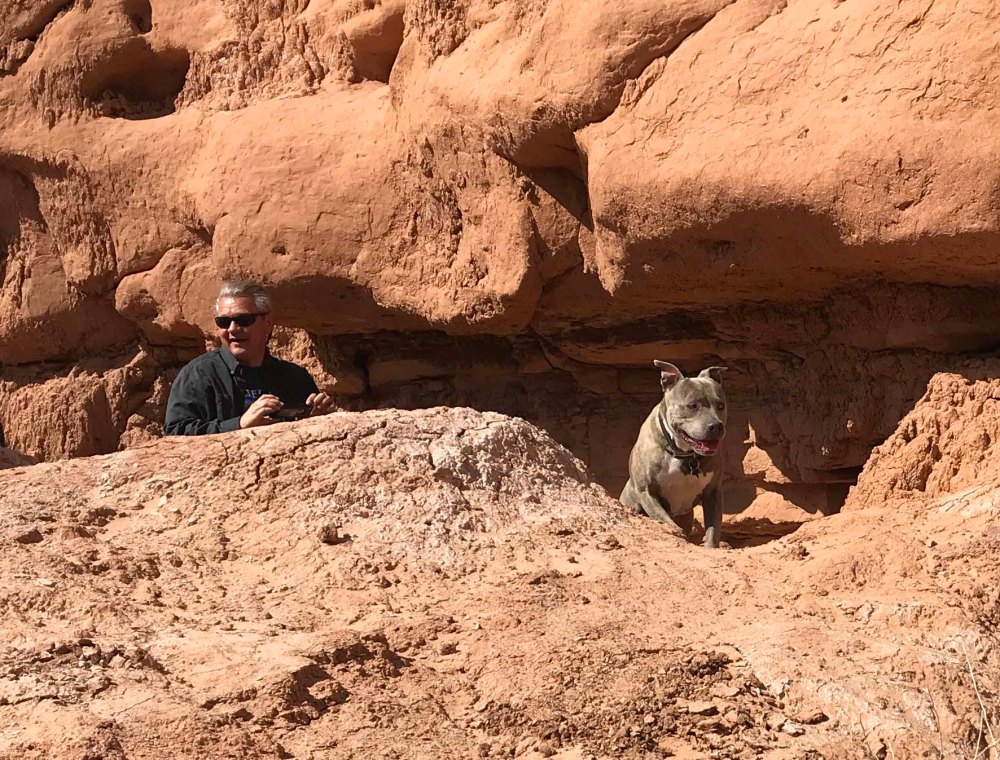 Even Hobie got into the action 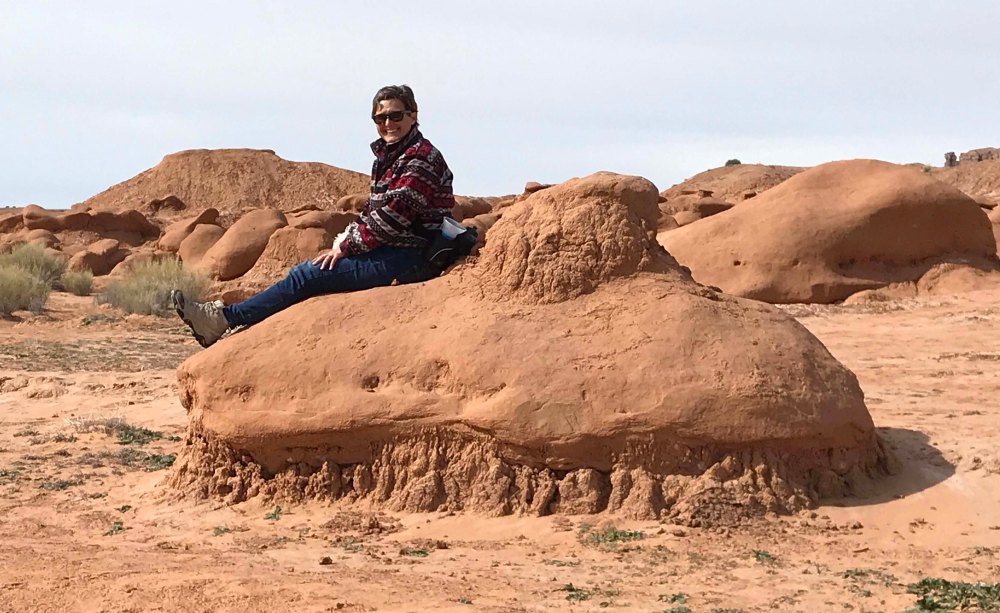 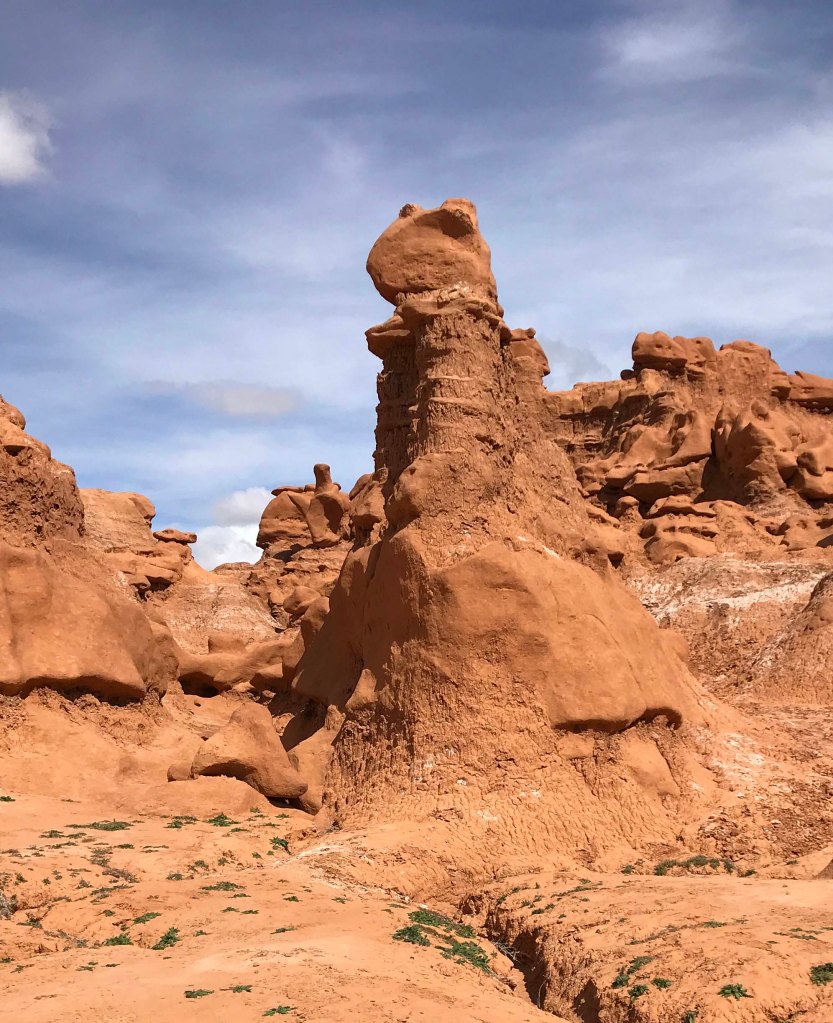 And whatever this was!  A duck with an Adam’s apple?? 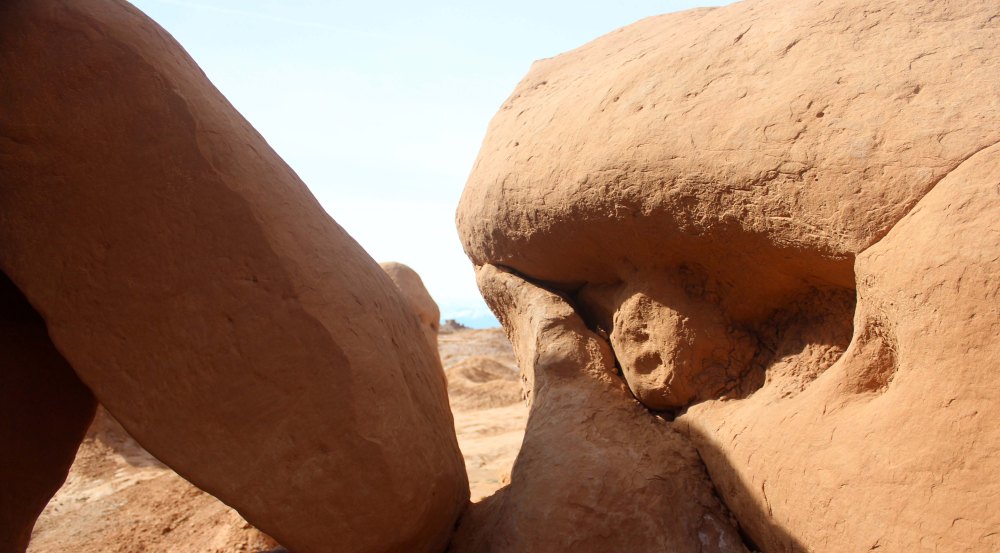 Lee saw this spooky one

Creepy …looks like a guy is stuck in the rocks.

I was super jealous of how Deb got Hurley to pose for her. Jack was way too excited.

This was the best we could do.  He didn’t want to sit he just wanted to run and run. 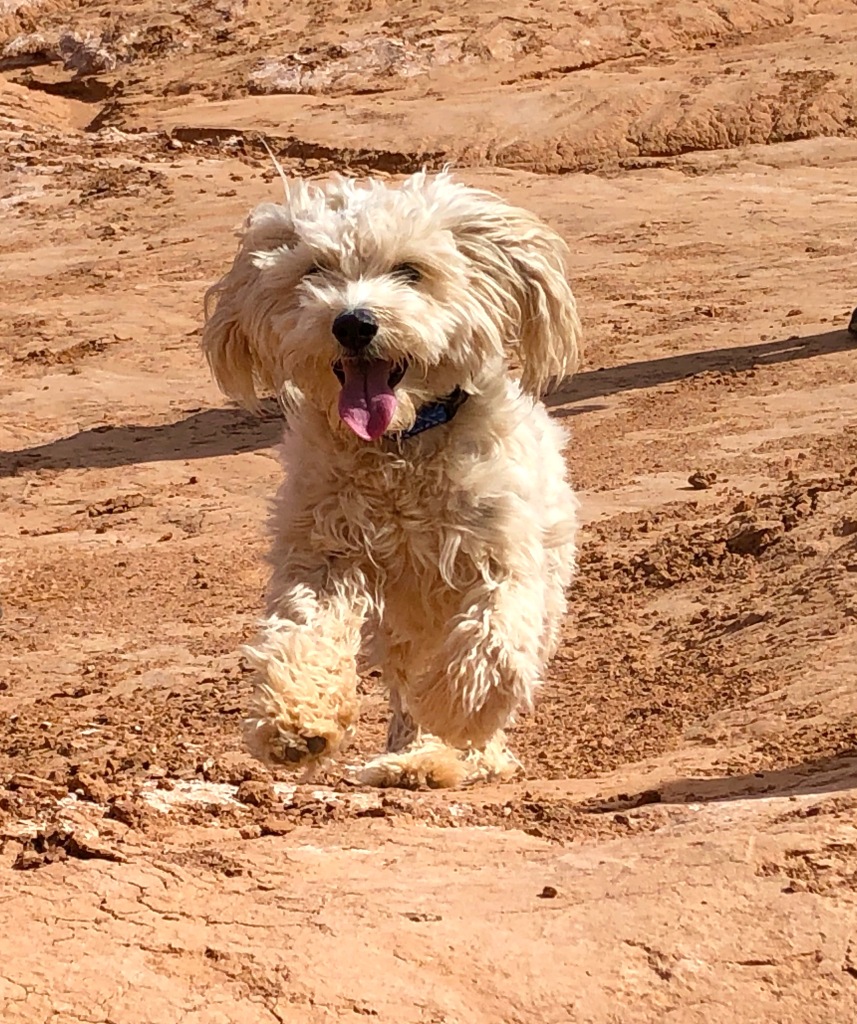 Thankfully Deb captured this shot of Jack which is one of my favorite pictures ever. 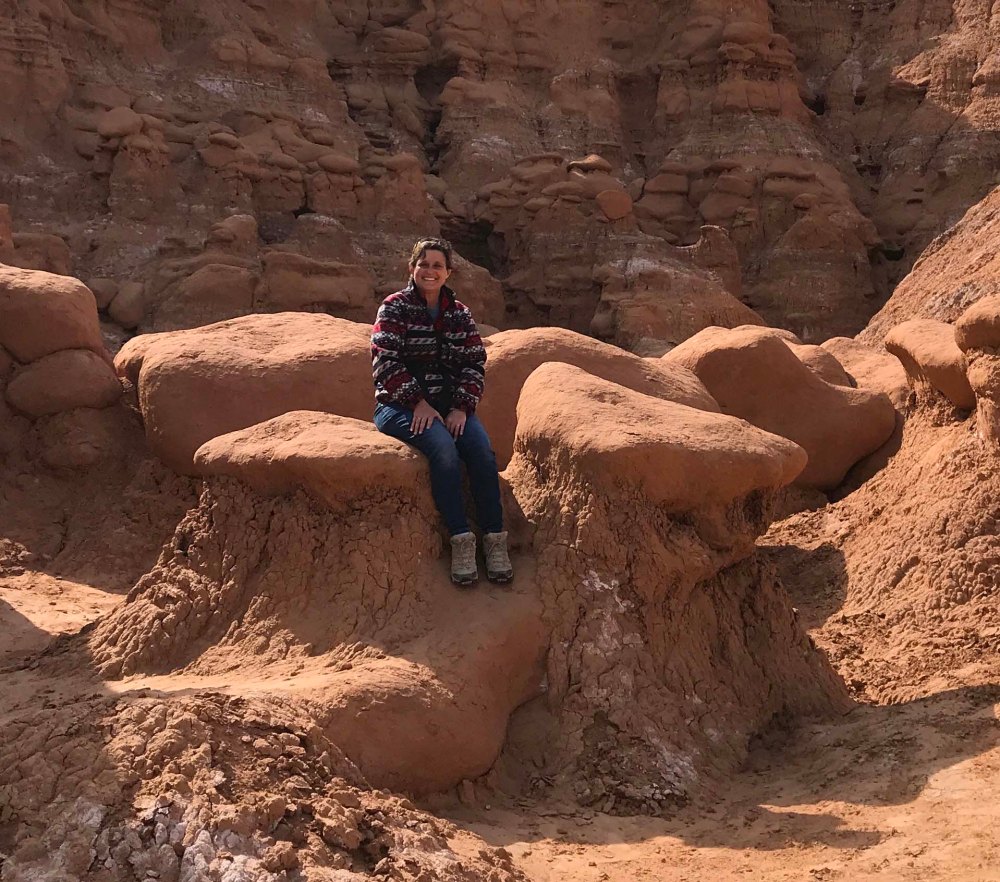 So we just focused on people shots.

The best part was probably when we climbed the hill and entered the second valley and had it all to ourselves.  We just had to be careful to keep an eye on landmarks to find our way back out, because you can’t climb out just anywhere.

Climbing into the next valley

Hobie was ready to explore!! He had more energy than I have seen in a long time.

We used this huge white and red rock as a landmark to find our way back out. 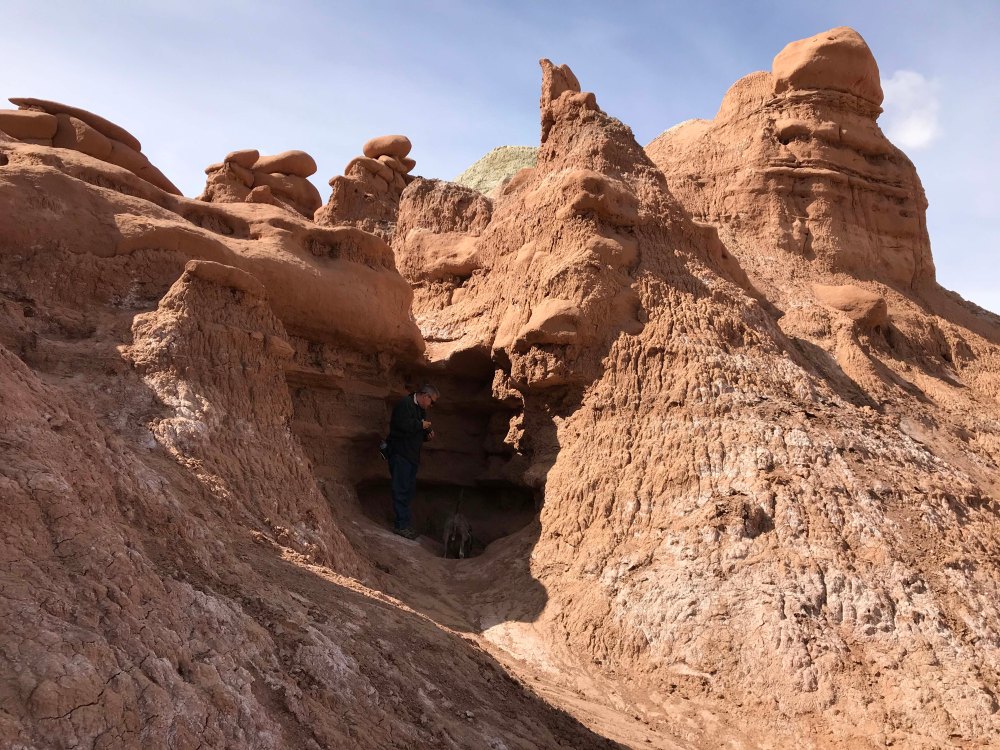 Lee loved exploring all the little caves and Hurley was right there with him.

I just loved wandering and looking at all the rock formations. 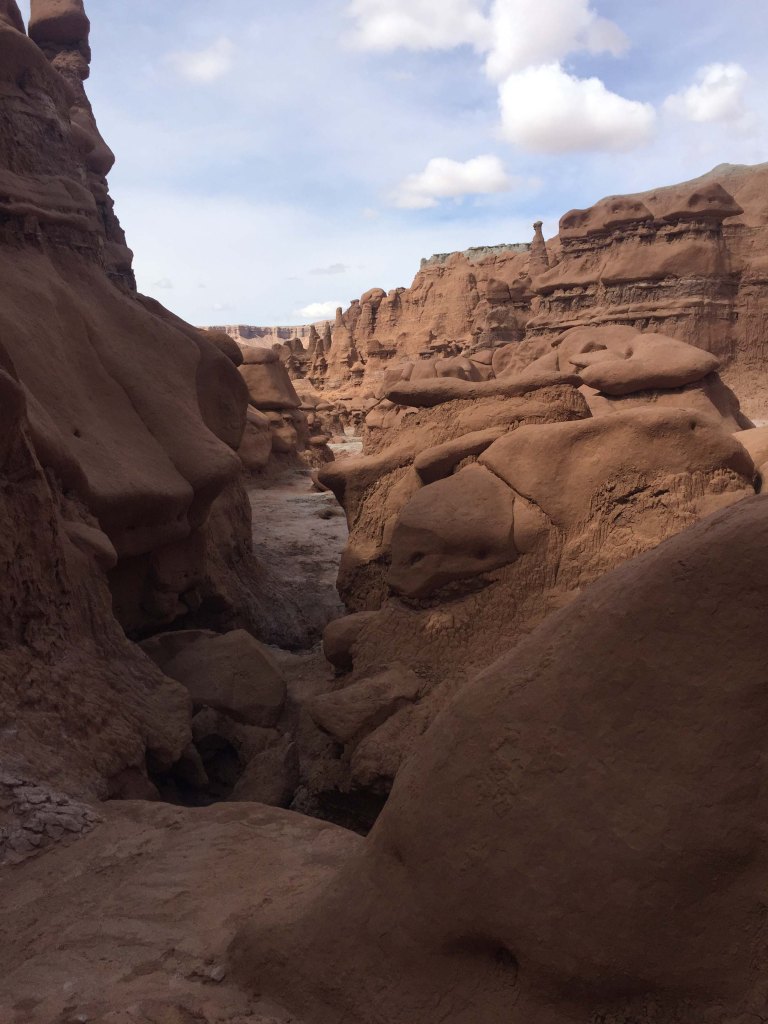 Jack and Hobie stayed right with me when I wandered and it was a great off leash lesson for Jack.

Probably the funnest part of the day was when Deb decided to climb up on a Hoodoo.  She picked a tall one which was crazy and none of the rest of us was willing to do, but we were more than willing to pose on the little tiny ones. 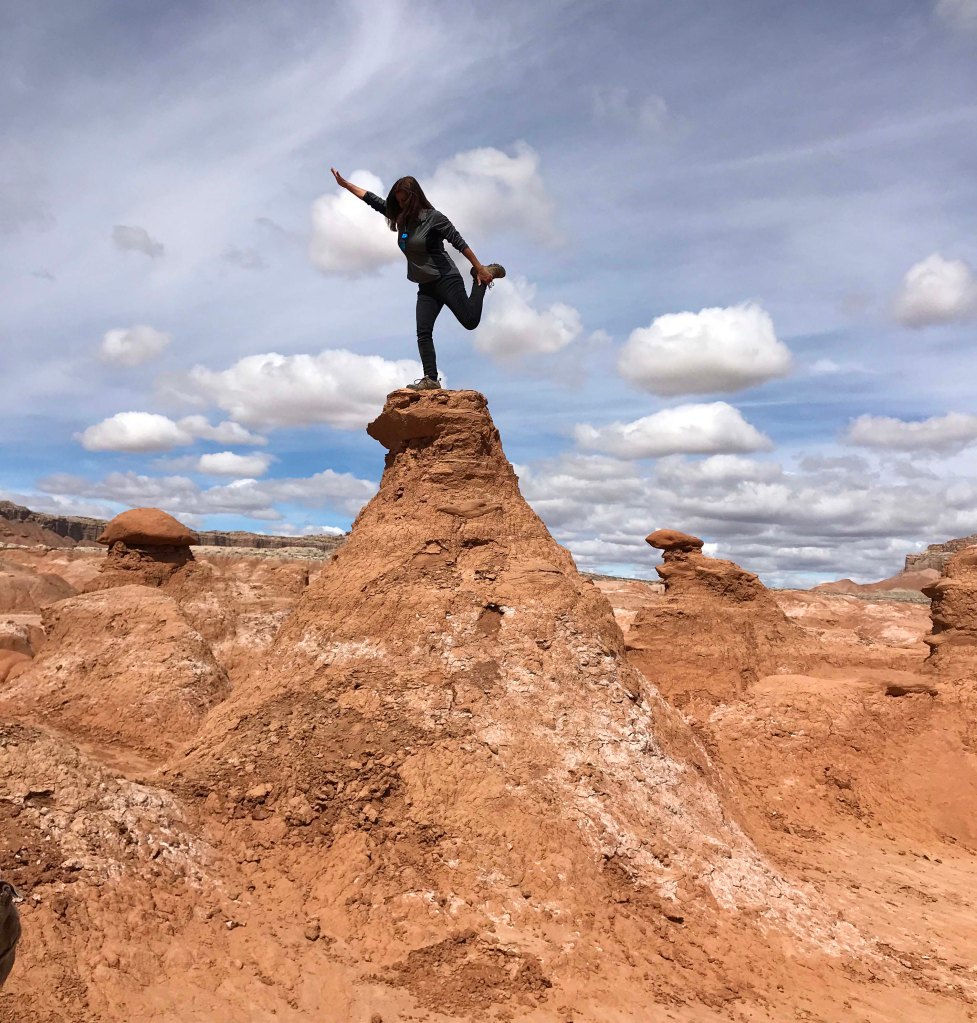 Met not so much

Even Lee got into the act, It was that kind of place!

We all had a wonderful time, but it was more tiring than I thought.  In the afternoon the group went on a rim hike but Greg and I bowed out.  I still think the hike along the bottom was the best but I am glad they got to do two hikes.

(Added bonus for those who made it all the way to the end, the entire unedited scene from Galaxy Quest that was shot in Goblin Valley. – Lee)