While we were driving Route 12, we decided to take a 9 mile detour and visit Kodachrome Basin State Park. Last year when we drove Cottonwood Canyon Road we ended up here, but didn’t want to pay the $8 day use fee because it was so late in the day.  We had heard that there were lots of hiking trails in the park and of course it was known for the ability to camp within the rocks. It also seemed like a really good place to take Jack on his first hike.  I had been putting this off, because I was a little nervous about how well he would do.  He has the boundless energy of a puppy, but also the lack of self control, and walking him is often a challenge because he is all over the place.  I wasn’t sure how that would look on a hiking trail, and really wanted Lee to be with me when we gave it a try.  Usually we would go inside and watch the movie, but it was 17 minutes long and I didn’t want to leave Jack in the truck that long.  I thought it would be too hot. Instead we asked where the best place to have lunch was, and grabbed a brochure so that we could select a hike. 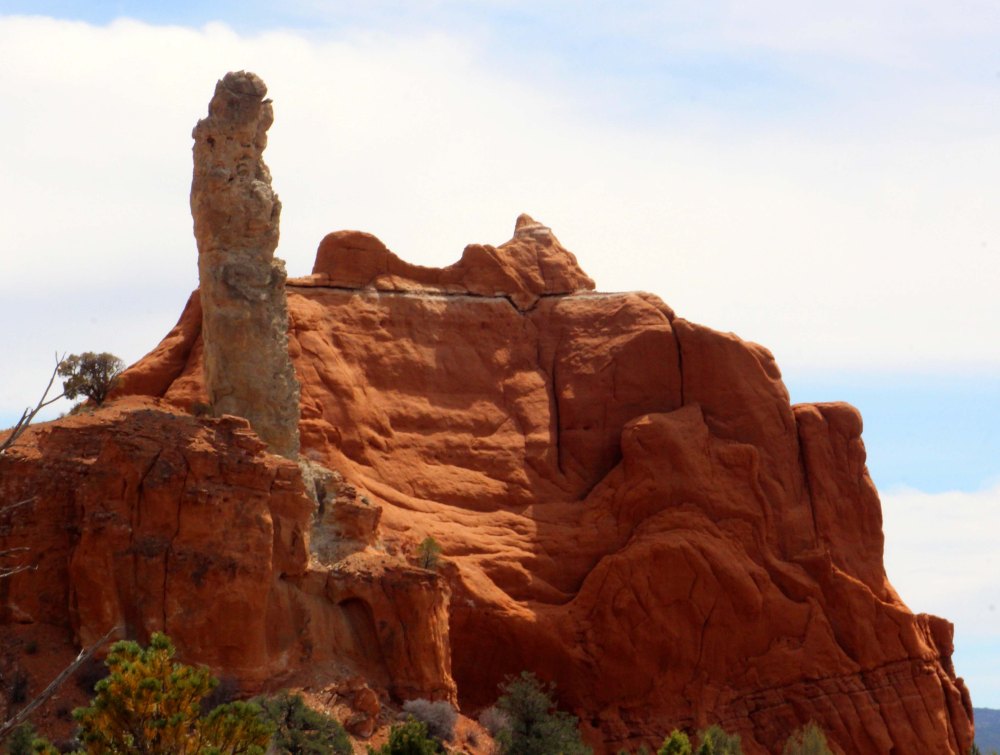 The rock formations on the way in are nice 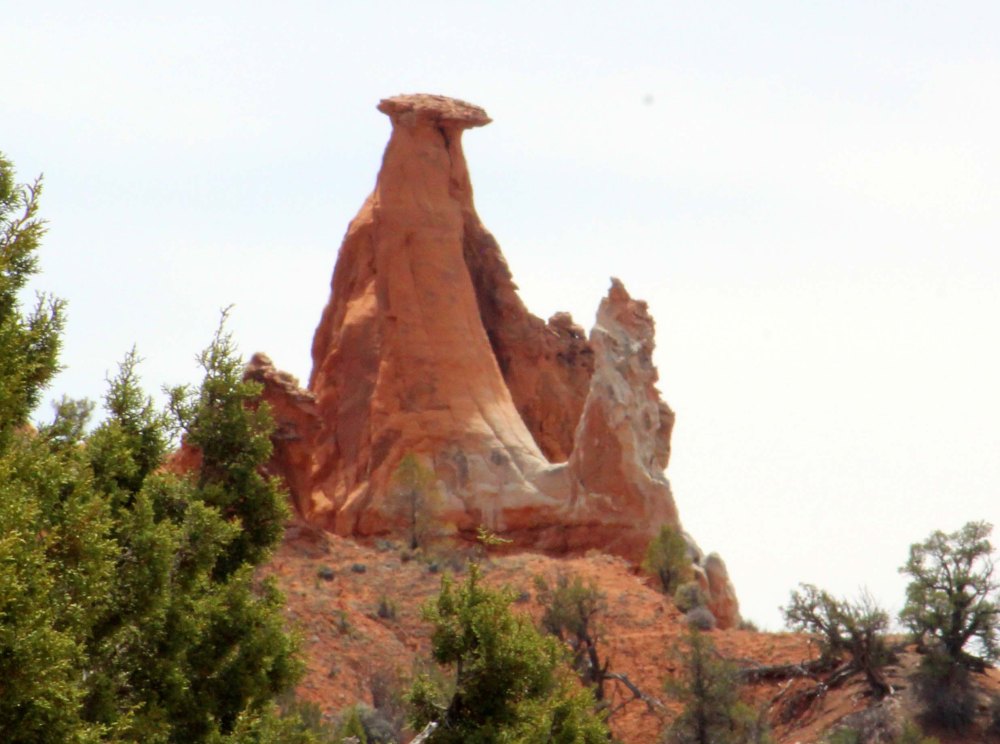 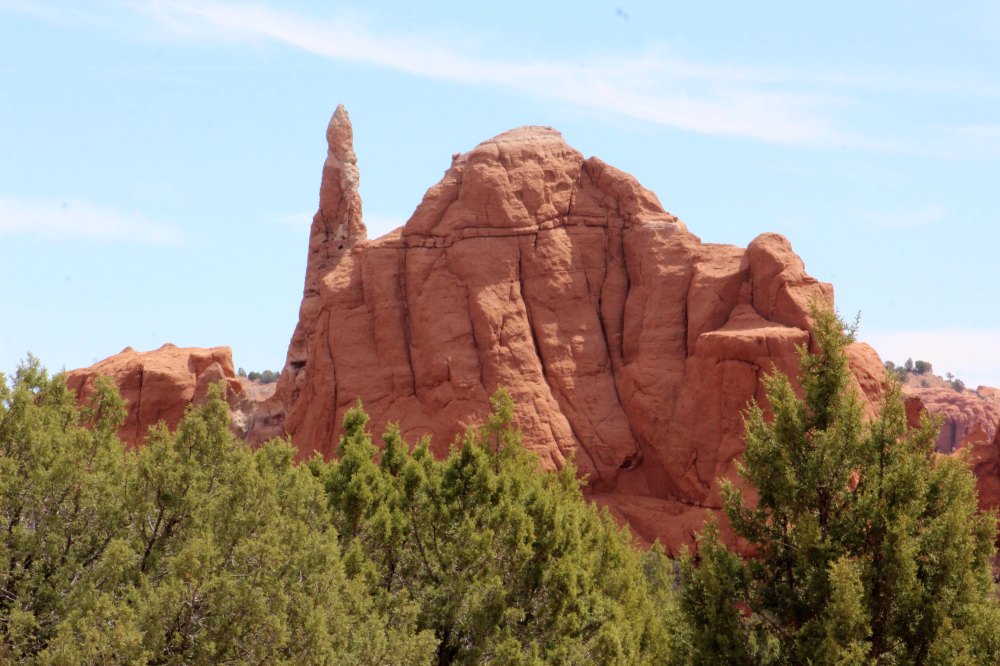 Loved our lunch spot and we had it all to ourselves. 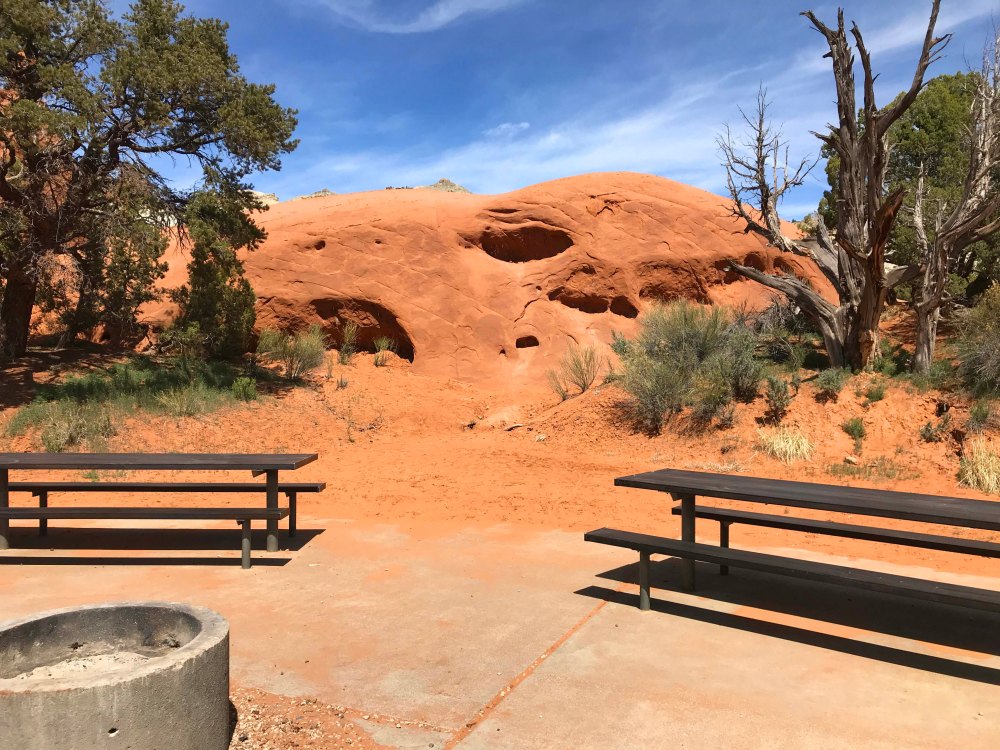 Gave Jack a chance to explore a little before the hike

Turns out he loves climbing on rocks which was one of my concerns.   As an FYI he is usually on leash in these pictures but I photoshop them out because it looks better. In this one I got the leash but not its shadow lol.

By the time lunch was over it was starting to get a little hot, so I decided on a 1.5 mile canyon floor hike.  I definitely wanted something flat, plus I enjoy walking at the base of the canyons rather than the steep climbs to overlooks along the rim.  I much prefer being “within the rocks” and all things being equal I’ll take a flat hike over one with elevation any day. We made sure we had plenty of water and were delighted to see that Jack’s water bottle fit perfectly in our Outdoor Mojave waist hiking packs.  On really long trips we use our hydration packs but most hikes we are fine with the waist packs and I really prefer them.  After trying numerous packs since becoming fulltimers, these are the first packs that don’t hurt my back. 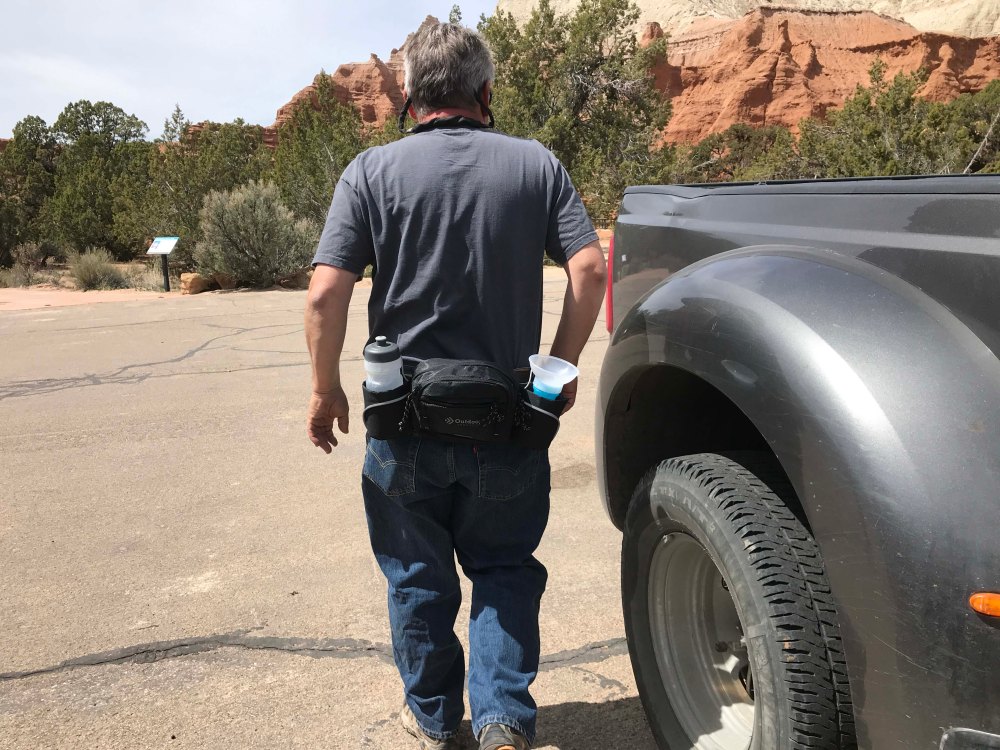 You can see Jack’s water bottle on the right.

Here’s our trail, The Grand Parade.

Jack and Lee taking off down the road. The sand had been recently graded, which left big ruts on the side.

Jack getting the lay of the land. 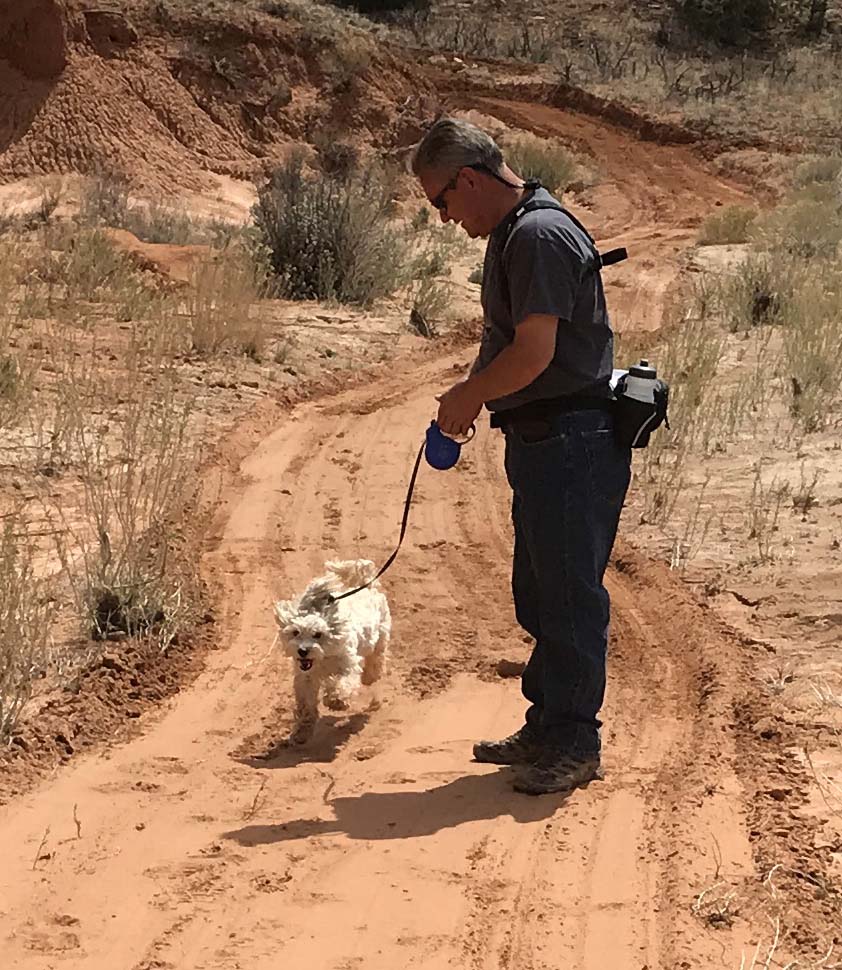 Didn’t take him long to get really excited.

Lee’s footprint and Jack’s pawprints in the sand.

Initially Jack was running all over the place, but then he got hot and started seeking the shady areas.  We took lots of water breaks and gave him rests along the way. 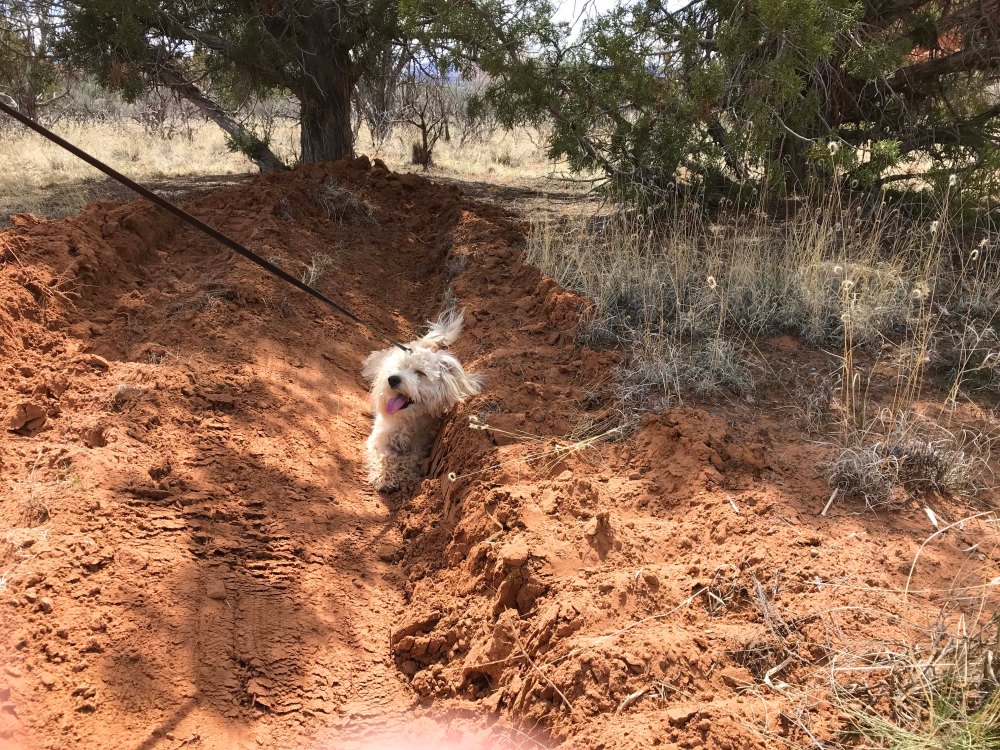 He also loved rolling in the dirt beside the trail. We let him because it was cooling him off.

Unfortunately he lost interest well before we were done, but we all kept going.  The real problem was how hot it was and unfortunately there was very little shade.

Jack is really not into posing 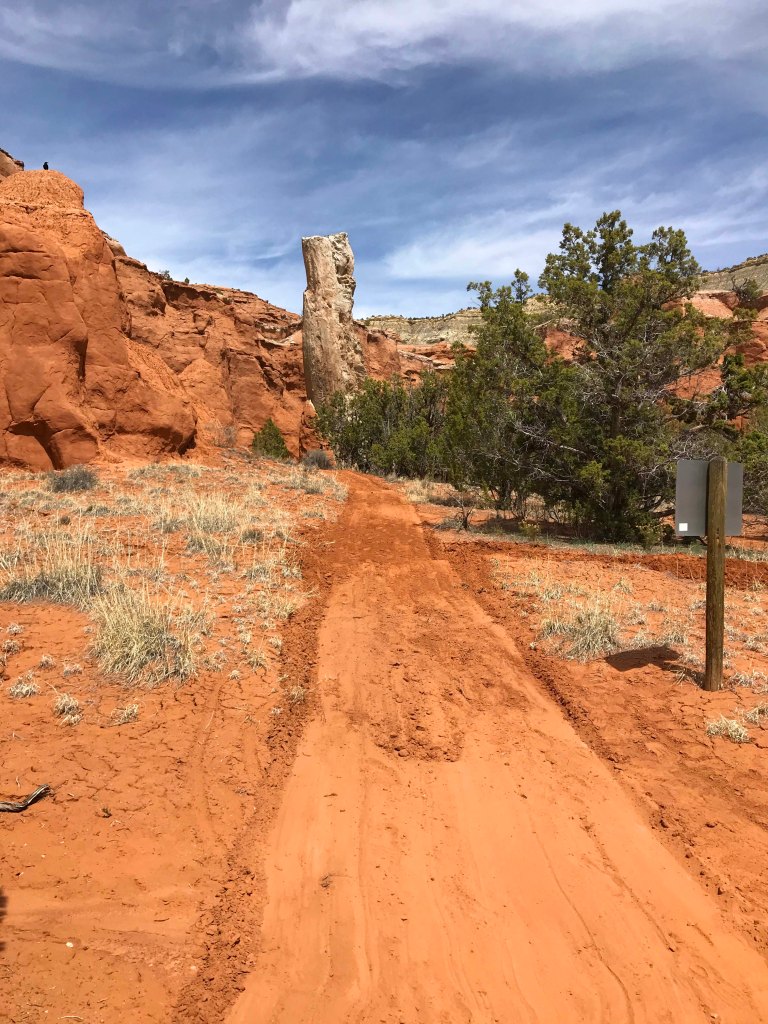 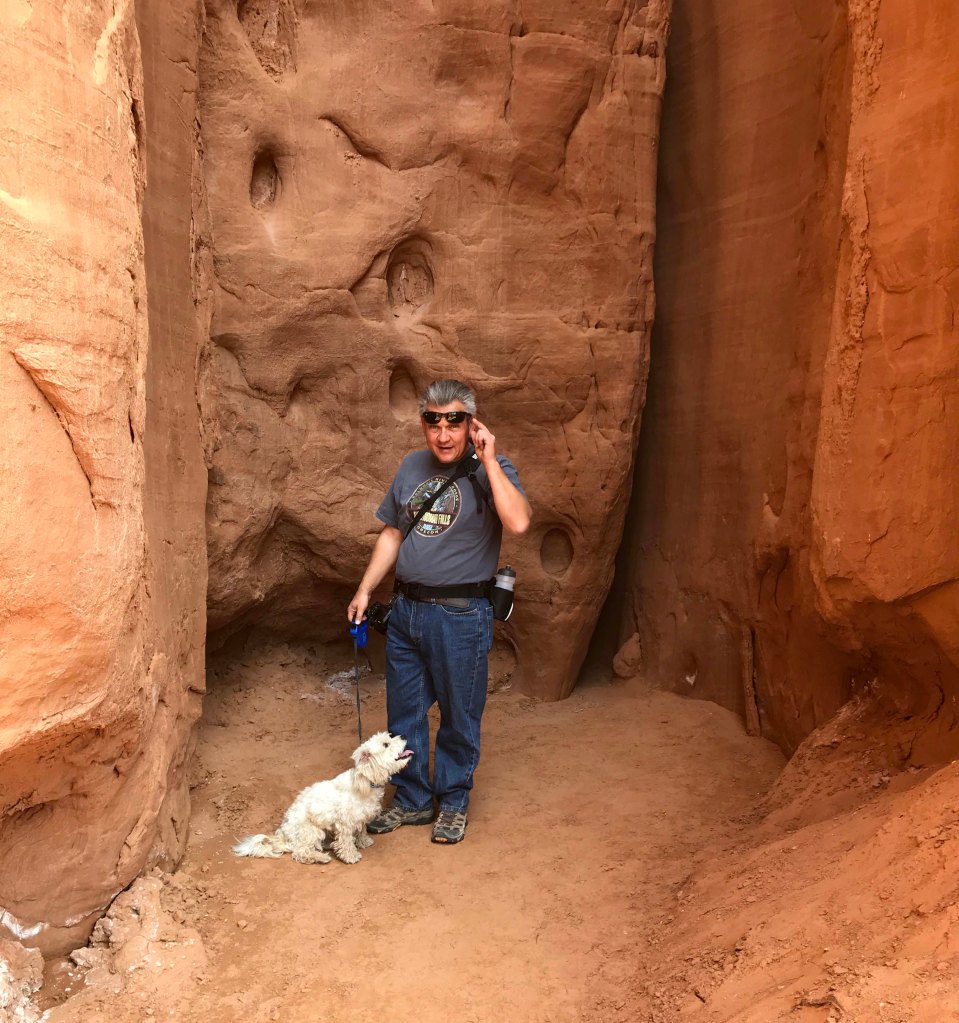 You can see he’s starting to get tired

And instead of leading the way he was lagging behind.

Taking a break he’s almost asleep on his feet. 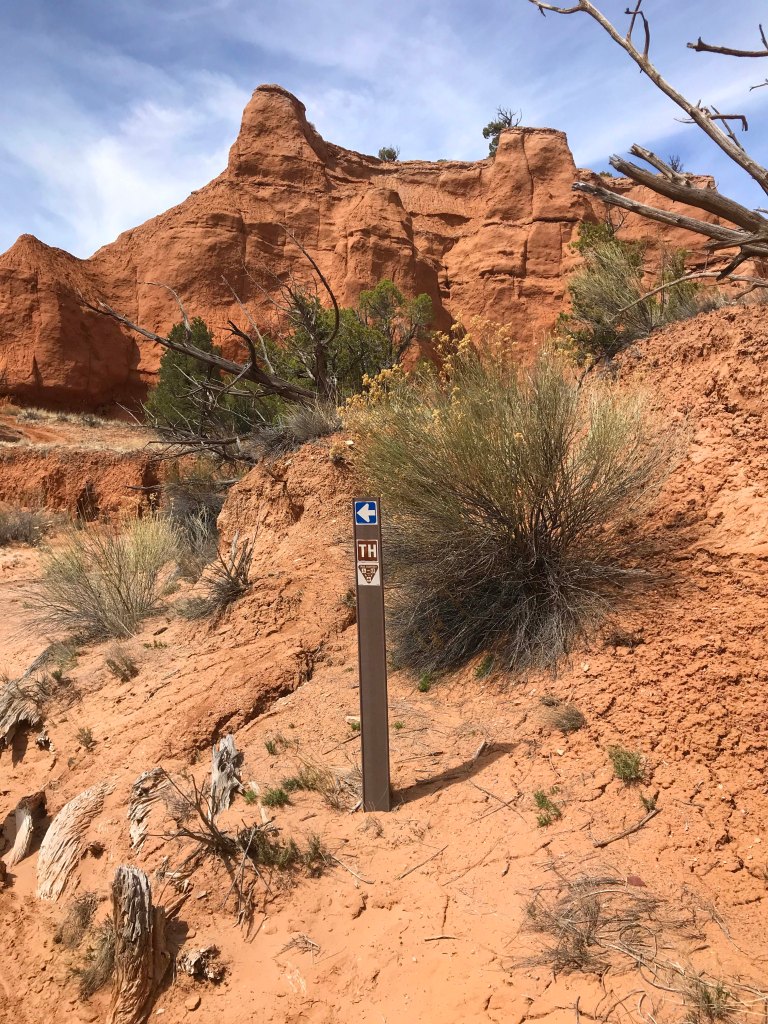 Finally we saw the sign showing the trailhead. Since it was a loop that meant the end was close.

This rock was very close to the entrance, so we knew we were in the home stretch when we saw this.

Overall Jack did fine, but in retrospect I should have started with something a little shorter and been more careful about the heat.  We weren’t expecting it to get so hot, but we also know better than to be hiking around 2pm.  It was nice though that hardly anyone was on the trail.  That allowed us to work on hiking etiquette with him without worrying about lots of people.  As far as the state park and the hikes go, I would say it is just OK.  There are lots of better trails and views that are free in the area, and it all seemed a little tame to me.  We did check out the campground and saw there were a few sites we could fit our rig into (Sites 40,41,42,44, and 45), but since we don’t recommend taking a big rig on Route 12, for us at least we wouldn’t stay there.  And again, not such a big deal because there are so many beautiful places in the area.  In general, I thought it was OK, but I wouldn’t go out of my way to visit.

View on the way out. In the grand scheme of things not that dramatic.

One pooped out puppy. Us wearing him out might be a first!!