The last week has been mostly about relaxing, although I have found myself feeling a little restless. That wasn’t helped by an unusual batch of extended rain this week as we caught the tail end of a hurricane.  We were lucky though, no wind or lightning just steady rain, but it was enough to stop the guys from puttering outside and made us all feel a little cooped up. We took advantage of the time though and went to meet some RV Dreamer friends for lunch.  We met Mikki and Jay (Chasing our Sunset) at the 2016 rally and have stayed in touch since then but never had a chance to meet in person.  Several months ago they decided to give gate guarding a try and so far are really liking it.  We were lucky enough to catch them on a rare break between gigs and met halfway to see each other in person.  Since we have talked via social media several times it really was like we had just seen each other yesterday and no time had passed at all.

From left: Jay, Mikki, me, and Lee

We love all of our RVer friends, but I really enjoy comparing notes with other couples like us who have to work most of the year.  I learn a lot for one thing, and it also makes me feel less alone, when we connect with others in similar circumstances.  The conversation just flew and we had a really good time, plus its always great to connect in person. So glad the stars aligned and we were able to see them.

While it was raining Lee and I also made a trip to the local Humane Society.  It has been four years since we were pet free, and although there are lots of benefits to traveling without pets, I have stretches where I really miss having one in my life.  Lee has remained adamant about his no pet policy, but I occasionally put my foot down and say I want to look.  When we went on the road I never agreed to a pet free life (although I did agree that for us it was a good way to start out) and I remind him of that when I start to feel the urge.  Usually I will do a search and start weighing the pros and cons, but mainly I just don’t want to force the issue without good reason.  I have been waiting for years to run across a pet I absolutely fell in love with, but so far that hasn’t happened.  Usually to fill that need we love on our friends pets and luckily we are getting to spend lots of time with Hobie.

Lee and Hobie hanging out. You’re not fooling anyone, you’re a big softie.

He even gets to be on our couch!

By the way, when we went into the cat room, they were all over Lee.  As gruff as he likes to be about pets, they gravitate to him and he had six cats loving on him.  The shelter was also OK with adopting out to a full time RVer (not all are) which is one of the other great things about Texas.  They have a much more relaxed attitude towards pets, versus some places up north where the background checks to adopt a pet are way more stringent.  It was a very nice place and I really liked the people who ran it, but no pet really called to me.  Plus I called my friend Kelly (who travels with a cat) and got the lowdown on what I would need to make it work.  The litter box placement and smell is a huge issue for Lee and we would also need a carrying case for travel days.  I was left with a vague feeling of lots of expense/work for the reward (as Lee says, cats decide how much love they will give you) so I decided to put that on the back burner for the moment and continue to chew on it.

As a consolation prize we decided to go to a local Honky Tonk with Greg and check our their $1 Taco Night.  Cori is on a work trip, so we are hanging out with Greg solo and he loves trying unusual things.  Normally Lee wouldn’t be caught dead in a small town bar, but since I grew up with those places I was game.  It was a really small place with pool tables and a small stage area, so I put $5 in the jukebox and Greg and I started playing pool.  We were having a good time until three young guys came in and started doing shots and suddenly I said it was time to go.  Greg seemed surprised that we wanted to leave so soon, but I recognized the signs and not long after one of the drunk guys hit the cue ball off the table and it almost hit Greg in the back.  Definitely time to go, which was a shame, because some live music was starting and the music was pretty good.  Still better safe than sorry, and the last thing I wanted was to be anywhere near a bar fight in small town Texas, which is where things seemed to be heading.

You could smoke in the bar which surprised all of us 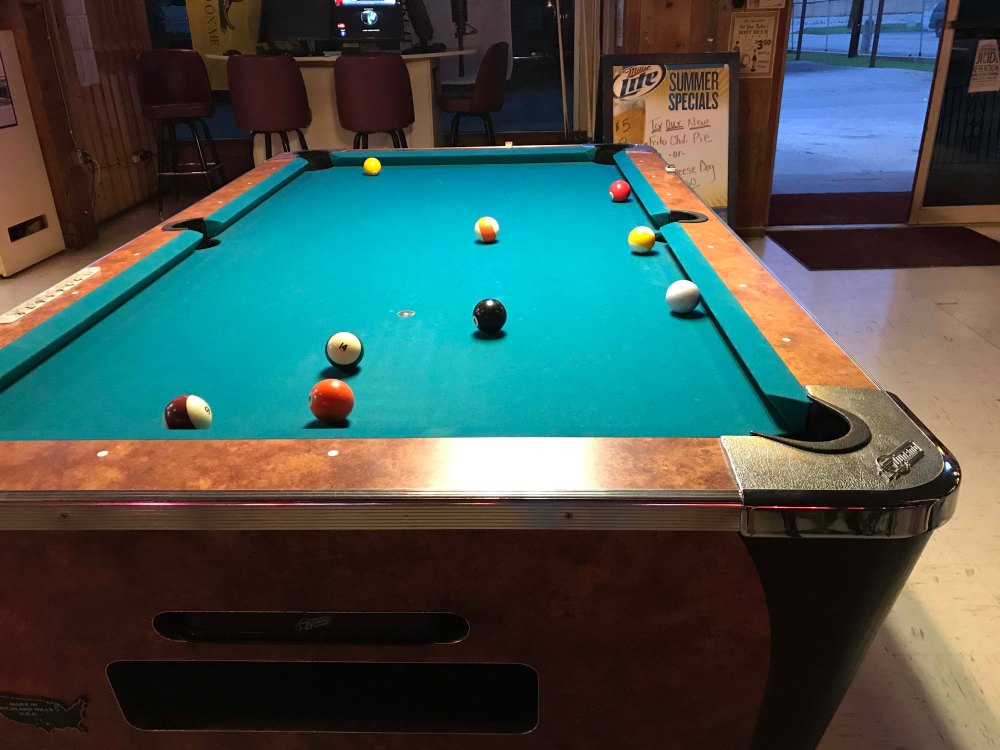 The tacos were awesome which you can see from Greg’s expression. We ate 11 between the three of us

The next night it was still raining and we made steak dinner.  Another great thing about Texas is the steak is generally fantastic and these were no exception.  The three of us hung out and talked (Lee and Greg solved all of the world’s problems) until eventually we called it a night. 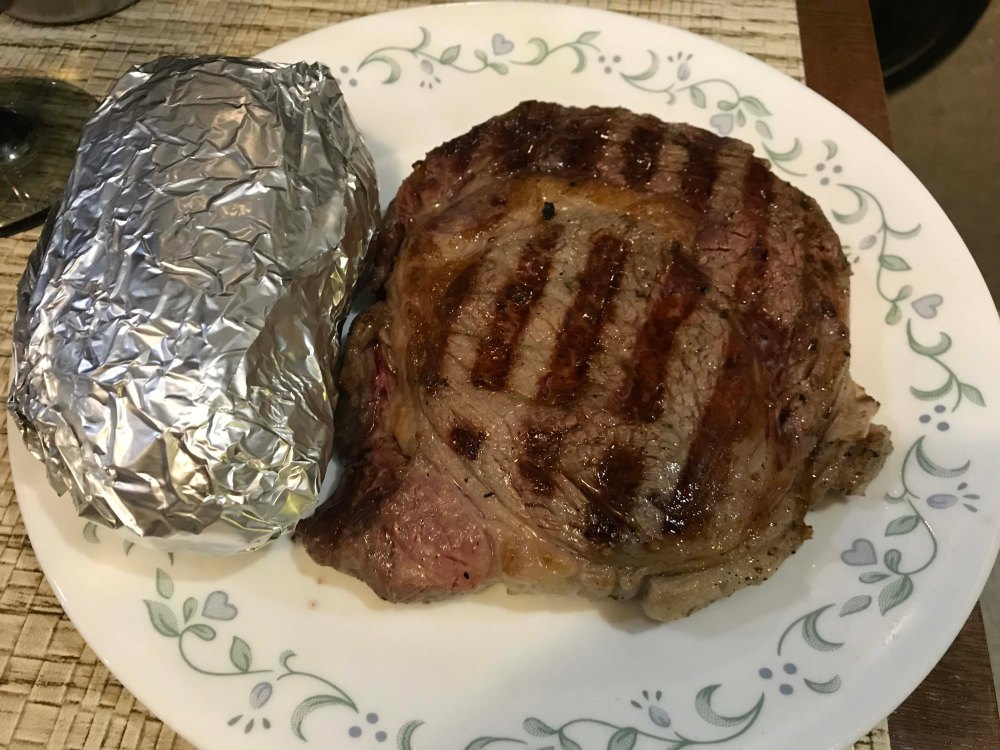 And the next day it finally stopped raining.  The guys both had lots of stuff to do outside, and I spent some time checking things off my list.  Since we got here, I sent my hard copy letter to the jury duty people (hope that turns out OK), we voted, and I made numerous calls about the biopsy bill.  I appreciate very much by the way everyone who has reached out and offered ideas or assistance, and I am plugging away.  I sent more detailed information to financial assistance, and called BCBS (my insurance company) to get more info.  Turns out they did NOT negotiate the prices down on this bill at all and if I want them to take another look at it I need to mail or fax a written request ::sigh.  The more I look into this the more I realize that something is just wrong with these charges, but I keep getting stonewalled.  I will spend some more time on it today as well and hopefully soon something will break through.

Thankfully we had a beautiful evening so I could put aside the phone frustrations from earlier in the day.  Greg smoked a yummy pork ternderloin and we had a big Texas sized fire and sat outside and enjoyed the twinkling lights in the trees and the beautiful sunset.  The weather was absolutely perfect and we all enjoyed ourselves very much.  Those perfect kind of nights are a big part of what makes this lifestyle so special. 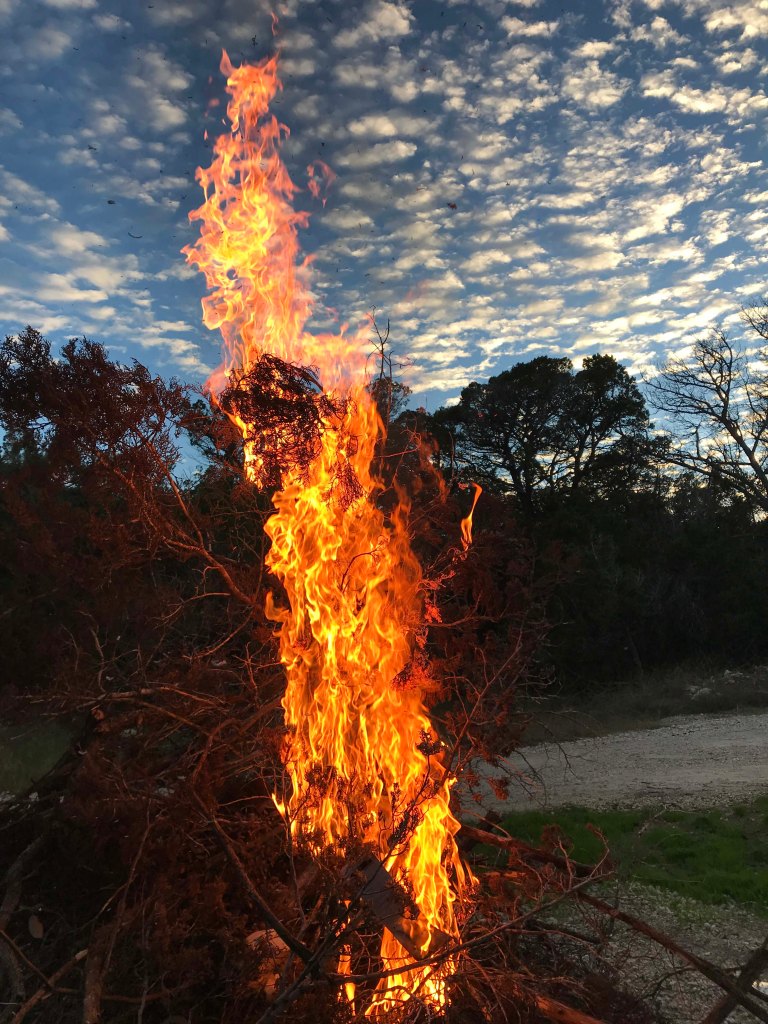 The sun started to set

And the lights came on. I felt like I was in an Italian Villa

Oh one more thing.  I mentioned I was feeling restless right, so I decided to try dying my hair.  Since there is so much grey in it, I was hoping I could dye it blonde since I have always wanted to try that.  I went to the drug store and bought L’Oreal Platinum and decided to give it a go.  Well I have to say I am definitely not a fan.  First off it looks kind of orange to me (perfect for Halloween) and since I have so much grey the color is very uneven.  And it turns out the blue tint to my pale skin maybe isn’t such a good match for a blonde color anyways, and the whole thing just didn’t turn out the way I wanted it to.  Oh well.  The good news is my hair grows fast and since I keep it short it won’t take long to get cut out.  The big question is will I just leave it or wait the minimum period and dye it brown again.  Not sure, but I will say I wish I would have just left it alone.  This is what happens when I am feeling restless, which is not necessarily a good thing.

18 thoughts on “Feeling Restless in Texas”