Bright and early we started out the next morning for Canyonlands – Island In The Sky, and we took HWY 313, which was pretty close to our boondocking spot, but still a 24 mile drive to the park entrance from where 313 meets the main highway.  It was a bright blue sky day, but very windy, which is actually decent weather for a scenic drive. The drive itself was once again beautiful as we drove through free range cattle land and passed Horse Thief BLM Campground. Unlike the campgrounds down in the Needles, there is some cell service up on the mesa and many of the campsites in Horse Thief are big enough for large RV’s.  They have 58 sites and we liked 10, 13, 16,17,21, 23, 24. 29, 30, 44, 51, and 37 the most.  They also had a couple of group campsites, but again, those were mostly designed for tents, and since the campsites themselves were only $15 a night (dry camping only) those seemed to be a better deal.

Eventually we arrived at Island In The Sky and saw that the entrance fee was $25 per vehicle.  Once again we gained admittance for free with our America the Beautiful Pass and stopped at the visitors center right inside the gates.  The visitors center was pretty small and there were definitely more children around than in Needles, so we took a quick look, and then headed on the scenic drive. 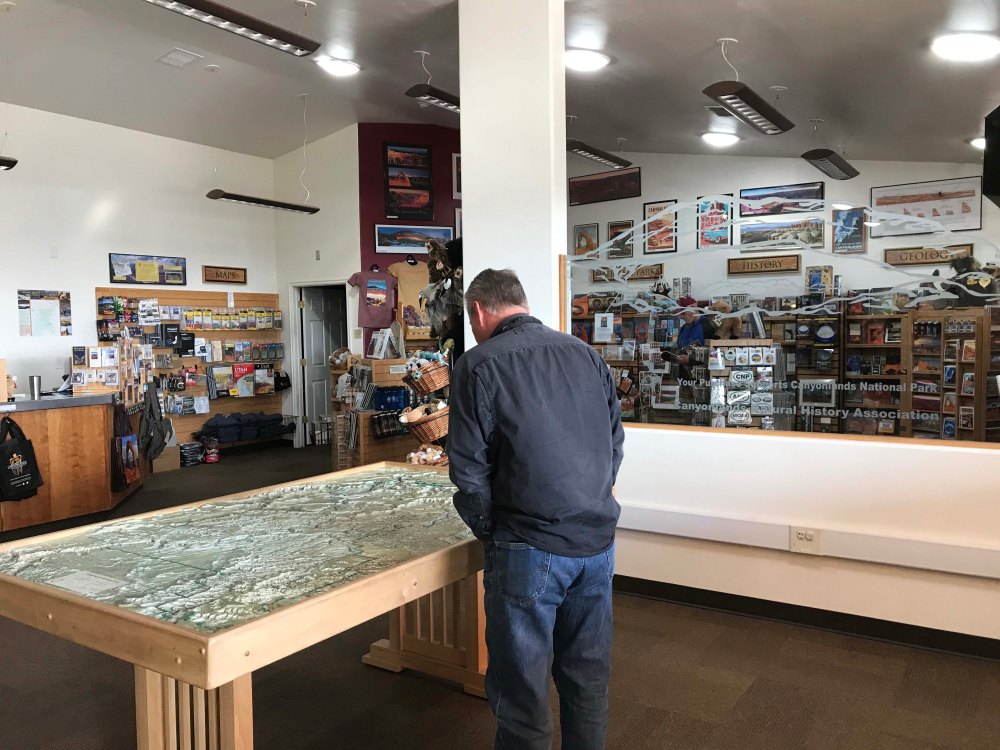 (When we first walked in it was really dark, and after a minute or so of wandering around inside I overheard a park employee apologizing to someone that they couldn’t take a credit card because the power was out and they had no idea when the power would be back on. The customer was getting pretty cranked up and being an ass about it. I muttered to myself that this poor employee was going to have a long bad day because people are the worst, and this was apparently her first encounter of the day with someone who wan’t going to be able to get what they wanted when they wanted it, and I hoped out loud that the power came back soon for her sake, and POOF, the power came back on. I’m not saying I’m a power God, or anything, but the power did come back on right after I wished for it. Just saying. – Lee)

Our first stop was Shaded Canyon Overlook, and we got out and walked down for the beautiful views.  It was a little steep and some of the path was on slickrock, but it was definitely worth it.  The only downside was the wind was very cold, and strong enough that I stayed away from the edge.  Neither the wind nor the steep drop-offs bothered Lee though, and he stayed a while and took several pictures.

Even Lee didn’t go around the big rock at the end because the wind gusts were pretty strong. 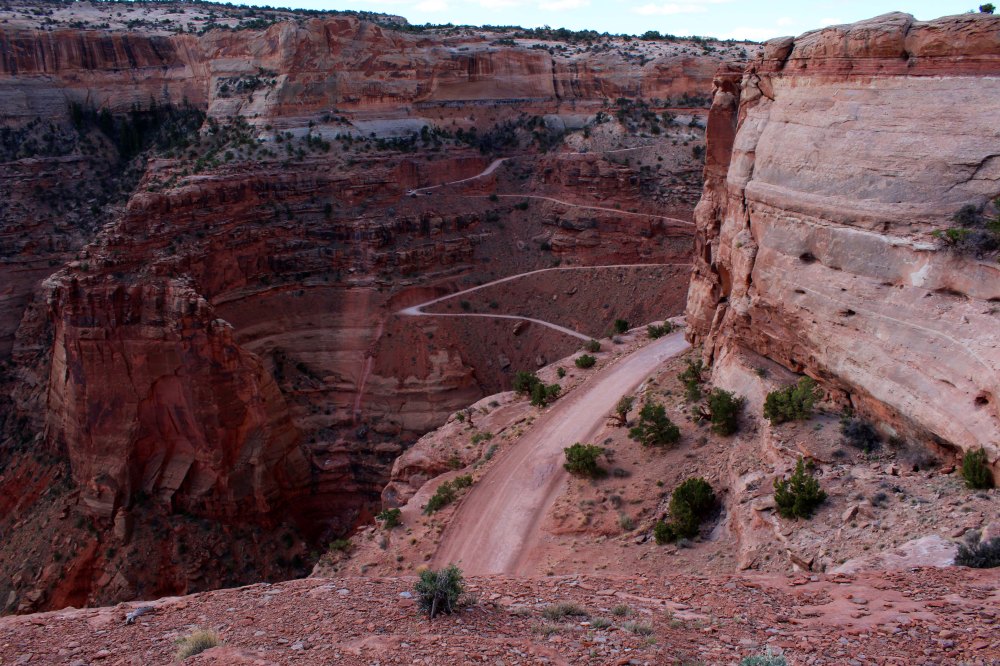 This is one of the roads we want to go back and drive with a Jeep.

Views of some of the roads we wanted to take in the future on the valley floor.

We passed the Mesa Arch trailhead, but although the route was somewhat short it was pretty steep, and it was still too cold for me.  It was a lot colder up on the Mesa than it was when we left our boondocking site, and I wasn’t really prepared for the cold weather.  So instead we went on to  Green River Overlook and again stunning views.

You can see the Green River in the right of the picture.

We also stopped at a small pull off for Candle Tower overlook and got out and walked a bit.  It was warming up and the “path” was flat enough even for me and you could see lots of stuff and still stay away from the edge.  Lee of course just walked right up to it.

I took a ton of pictures here. Loved this spot. I just wish we could have gotten some sun on the really cool rock in the background.  Next time!

Next up was Buck Canyon, and that overlook was stunning.  As with many of these pictures that show wide landscapes, you really can’t capture how pretty it was, especially on an overcast day. 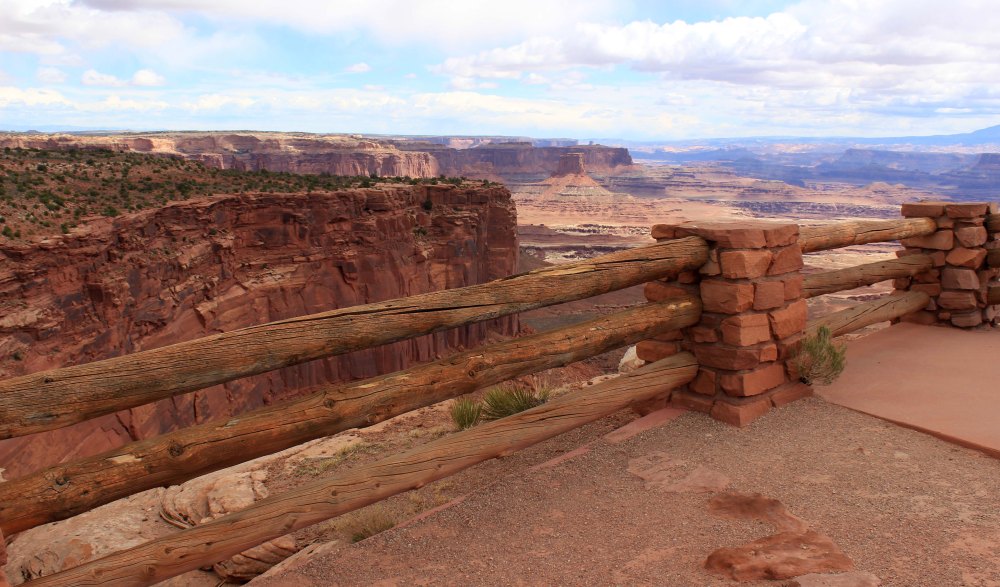 I liked the wooden barriers at the edges 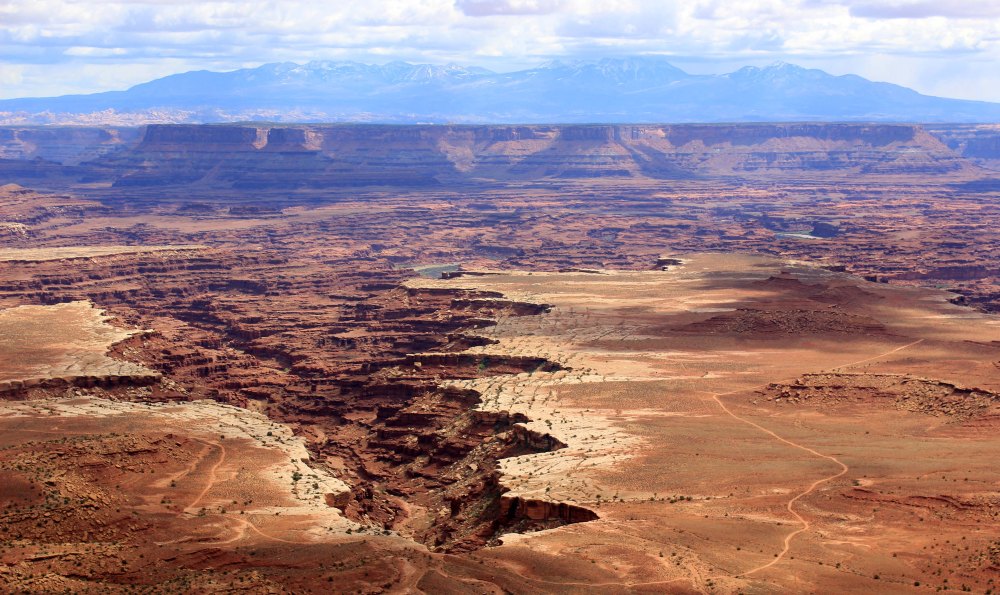 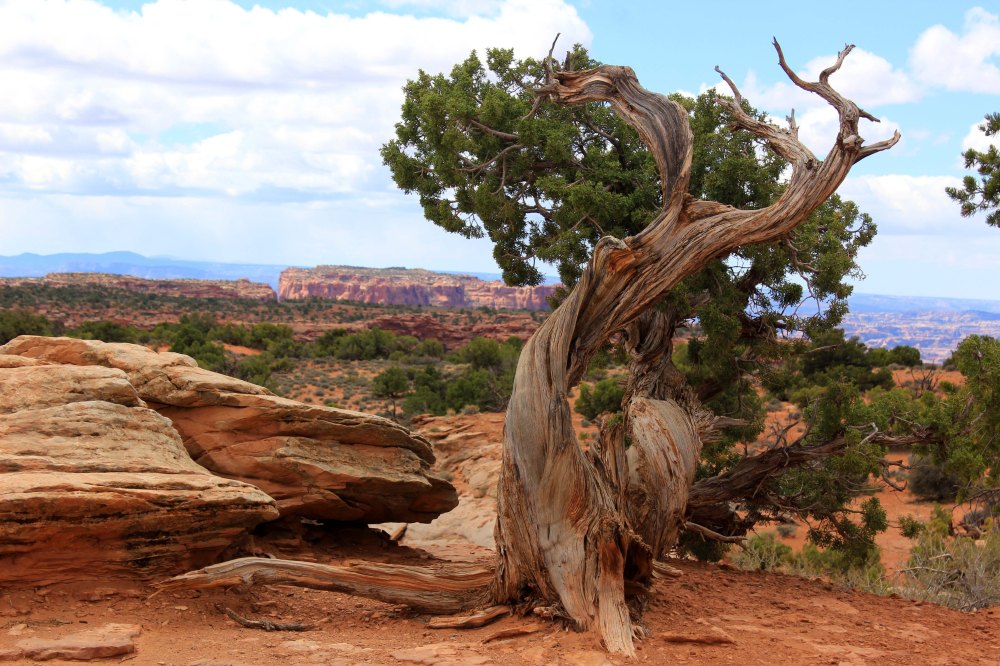 I could take pictures of these cool trees all day

Then we had Grand View Point, which was at 6080 ft.  There is a 1 mile walk around the canyon that you can take here, but it actually started snowing a bit while we were up there, which definitely made me feel less like a big baby.  Plus the wind was pretty strong and I just wasn’t feeling it so we took some pictures and then decided to come back and take a half a day.  I loved the Canyonlands, but the pace and excitement of the last couple of weeks was finally catching up with me and I really just needed some time to rest a bit.

You can see the snow to the left.  It wasn’t heavy, too dry for that, but it was cold.

Explains the layers of the canyon. In particular I found the desert varnish interesting as it explained those beautiful brown streaks on canyon walls. If you click on the picture you can get a much bigger image to read the info.

So here are the rest of the pictures for the day.  To be honest, it’s hard to tell one canyon view from another in these pics, but all the views were great.  The parking lots weren’t very full, but the trail heads were definitely seeing a ton of use, even mid week on a not so nice day.  I think of the two I actually preferred the Needles, because the nature was more accessible and of course we were at lower elevation.  The Mesa is definitely worth a visit though, and again I couldn’t come close to capturing the beauty of it. I’m not sure any could.

For scale that little brown line at the tip of the hole is a dirt 4×4 road. 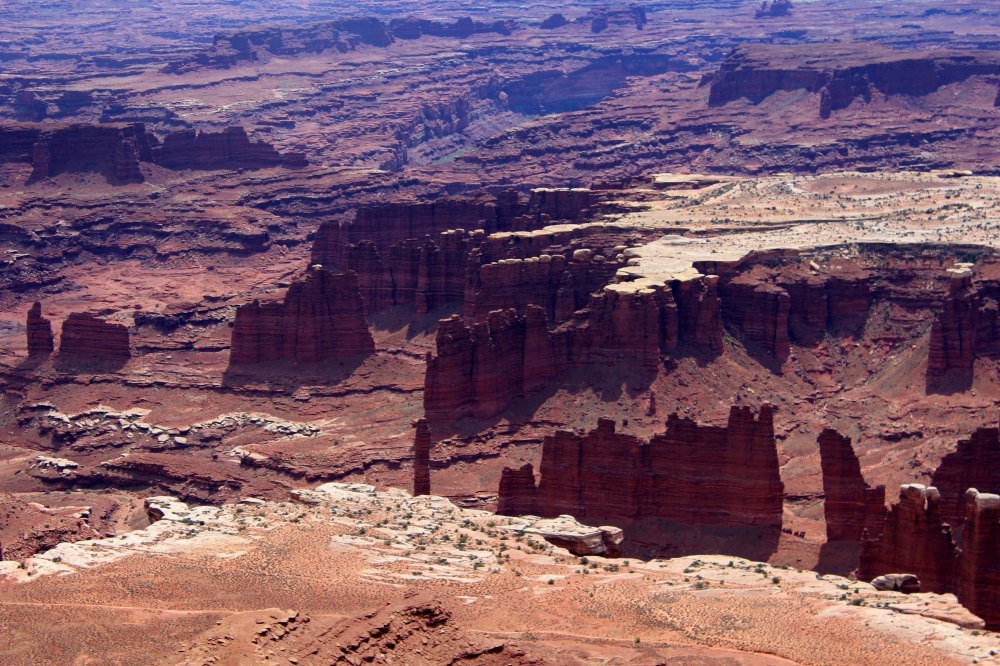 Sharks fin 🙂  It wasn’t the prettiest view we saw all day, but something about it called for a picture to be taken!

11 thoughts on “First Time at Canyonlands – Islands in the Sky”