After we left the Needles Overlook, we decided to continue on into the Needles entrance of Canyonlands.  We could have split this into two days, but the Needles entrance was 65 miles from where we were staying, and since we had seen the needles from a distance I really wanted to get closer.  So we continued on HWY 191 and eventually turned onto 211.  This is the road into Canyonlands proper, and also had the advantage of having a stop to see Newspaper Rock about 12 miles in.  (It was an additional 22 miles to Canyonlands from there.)
There is a large turnout at Newspaper Rock and we decided it was a really good place to eat lunch.  We had seen several of these petroglyph sites in our travels, but this was a big one by any standards, and we were able to get closer to this one than we had to others.

The road driving in was really great in and of itself 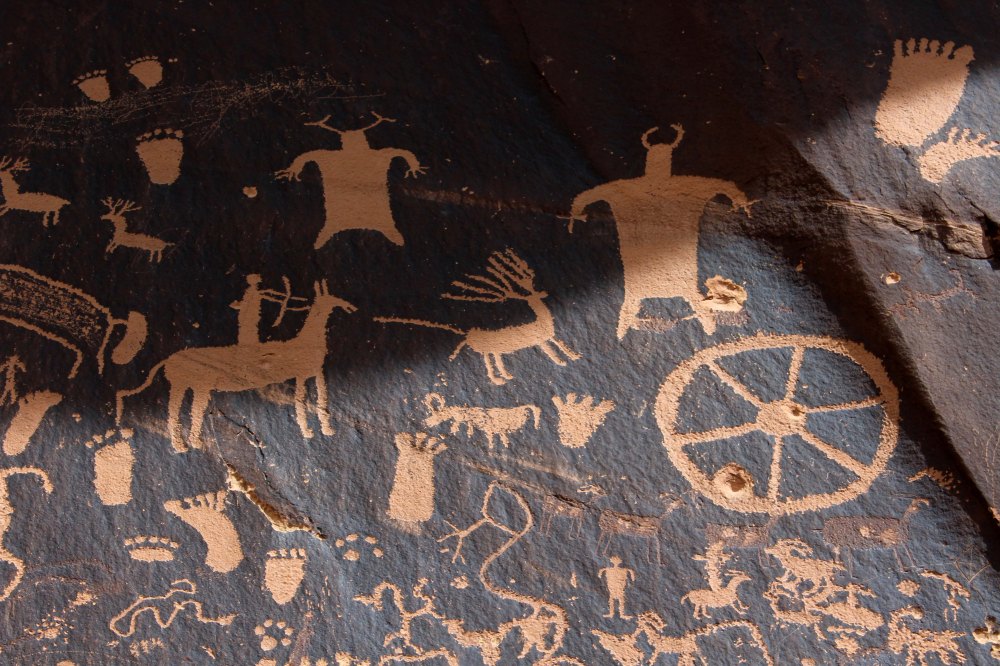 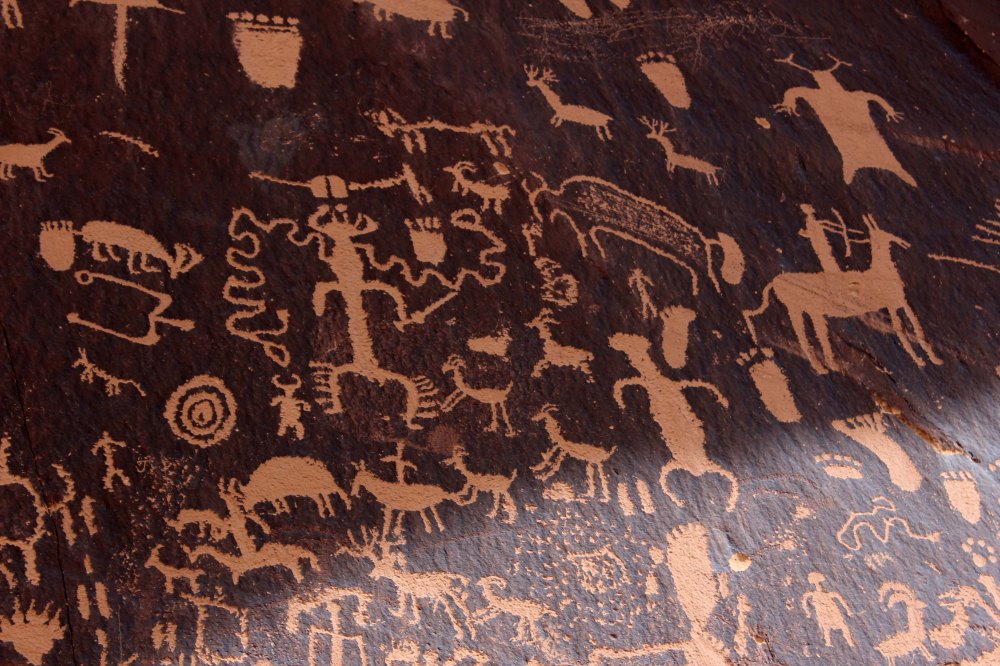 These sites are pretty cool, but the main problem I generally have with them is that you can’t tell which petroglyphs are ancient and which are more current.  Up until the 1950’s it was pretty commonplace for folks to “add” to these sites, and as interesting as it is to see someone’s initials from the 1900’s the pictures themselves are what I find interesting, and there is no way to date those.  The sign posted at the location does a great job of talking about that and because of the cross-cultural contamination archaeologists have a really hard time figuring out the meaning, if any, of the drawings.  They might have just been doodling even back then.

Still it was a nice place to stop, and after lunch and a few pictures we continued on our way. The road was paved, but a little rough in places, but we were lucky to hit a little sunshine as we traveled along the way.  The day was largely grey in the area, but the clouds had cleared to show a little sunshine in places the further south we got and we were glad for both the sunshine and the impact it had on the pictures.

Right before getting in the Canyonlands, we stopped at a little private RV Park called the Needles Outpost and went inside and met a young woman named Laura who was working there. She was in the process of hiking from Zion to the Arches and had taken the job to earn some extra money along the way.  When she found out we were full time RVers she had a lot of questions and we learned she wanted to buy a camper van and see the country that way.  We gave her our number one piece of advice: “Be Debt Free” and then after chatting a while we headed out.  I always like meeting young women like her in my travels, who have the courage to strike out and do something different.  I would never have had the guts to do that at her age, and I find it very admirable.

Next we stopped at the visitors center and went inside to look around.  When we were looking at a topographical map to see the places we had been earlier in the day a VERY friendly park ranger came up and talked to us.  She seemed genuinely glad that we had come and visited (something I often find in the lesser known parks) and gave us some great information about the roads and which ones could be driven in a 4×2. 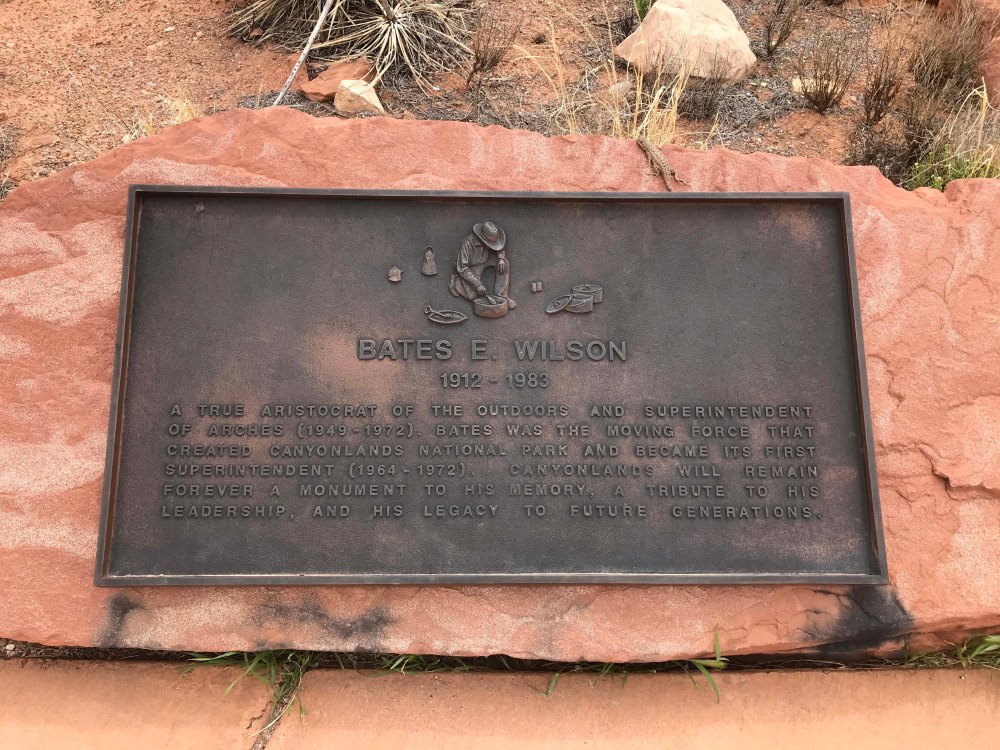 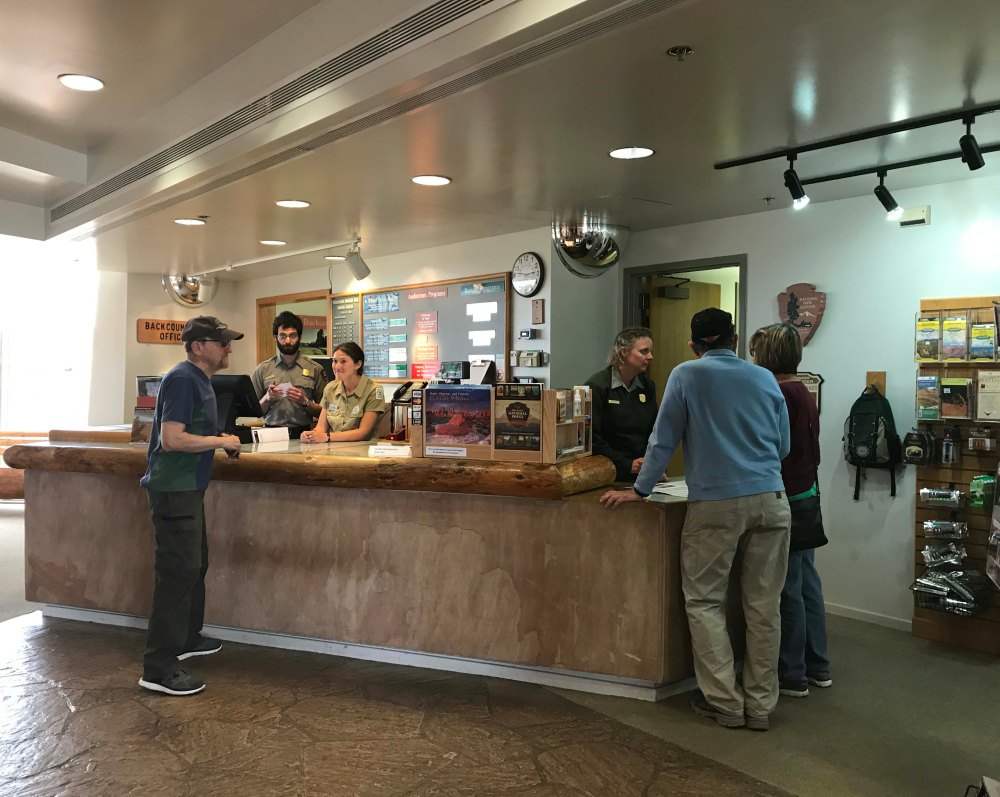 This is the area we traveled in the morning. I circled what I think were  Needles Overlook and Antcline Overlook.

And this was the road we came this morning ending where Lee has his finger. Looking at it from this view was really neat

I also was really impressed by a little display they had that showed the different types of rock formations. We had been seeing all of these in our travels in Utah, but this display made it really clear to me. 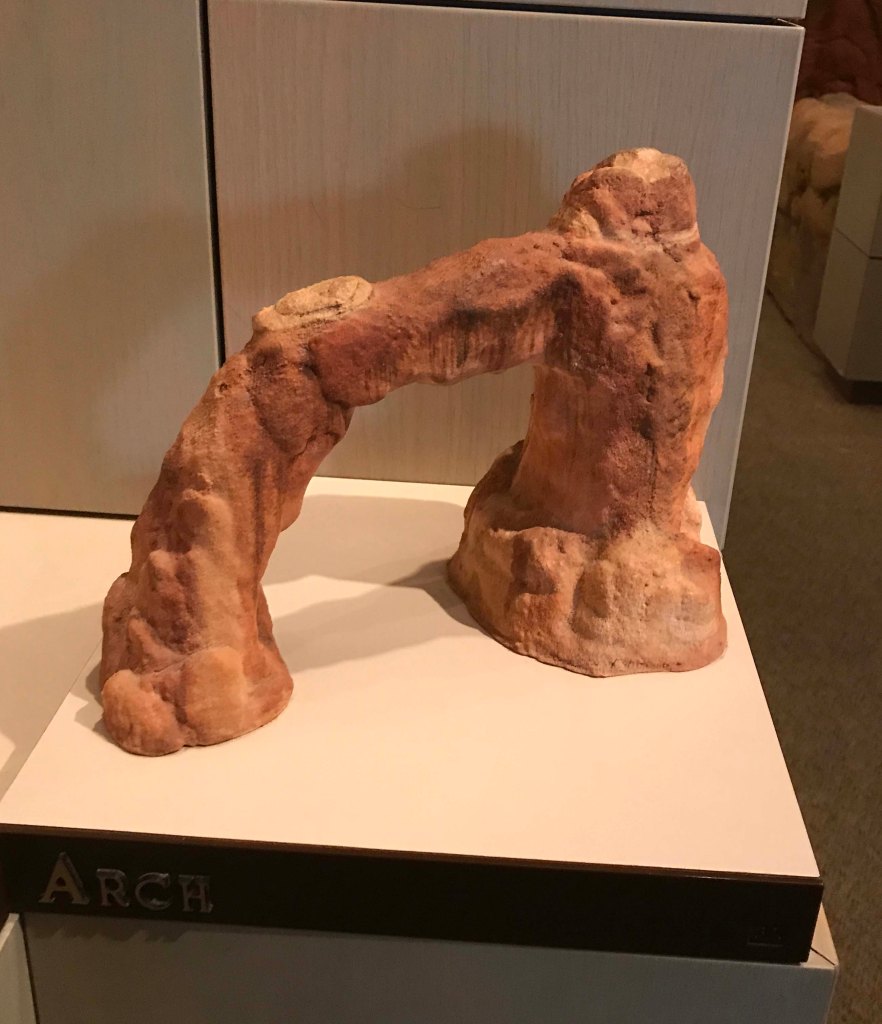 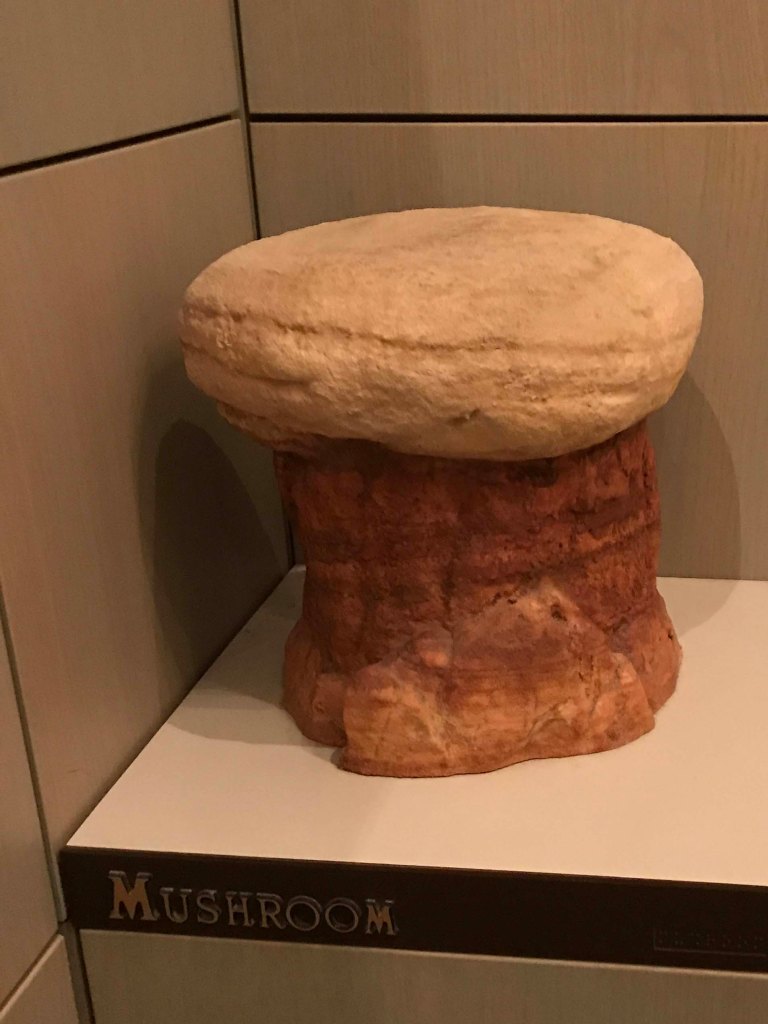 Mushrooms, which are probably my favorite, and we were about to see tons of these in Canyonlands 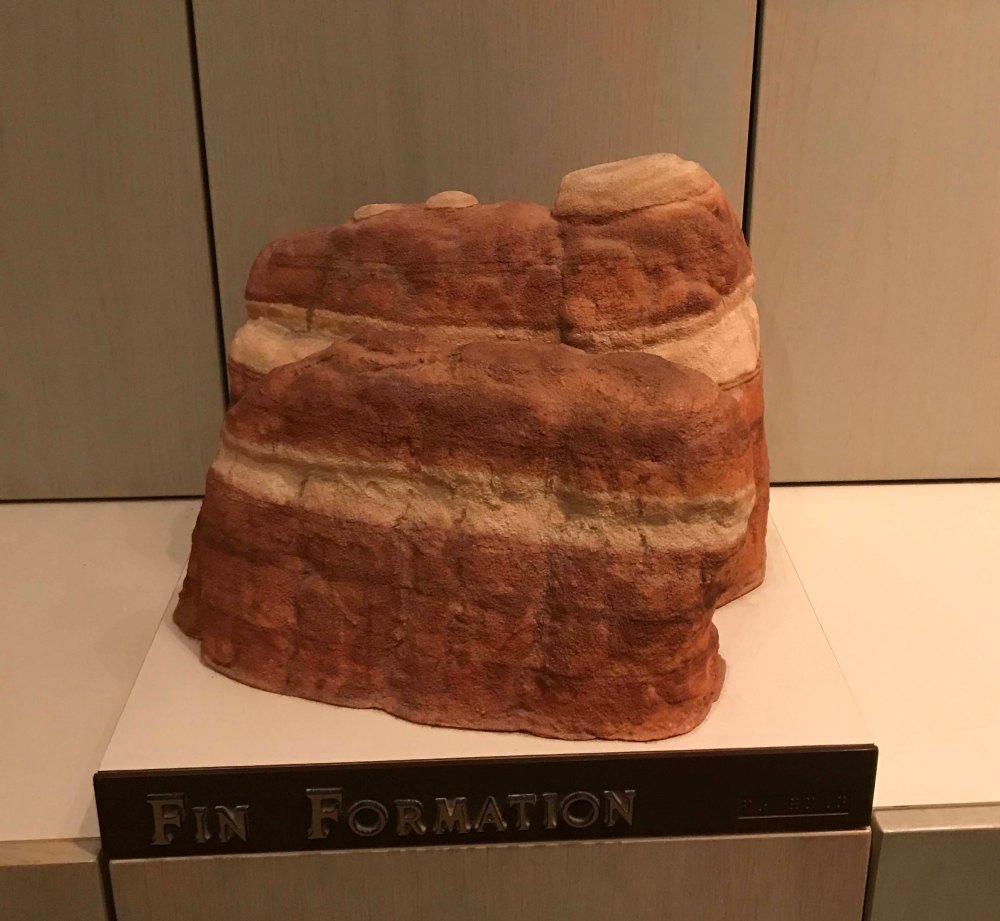 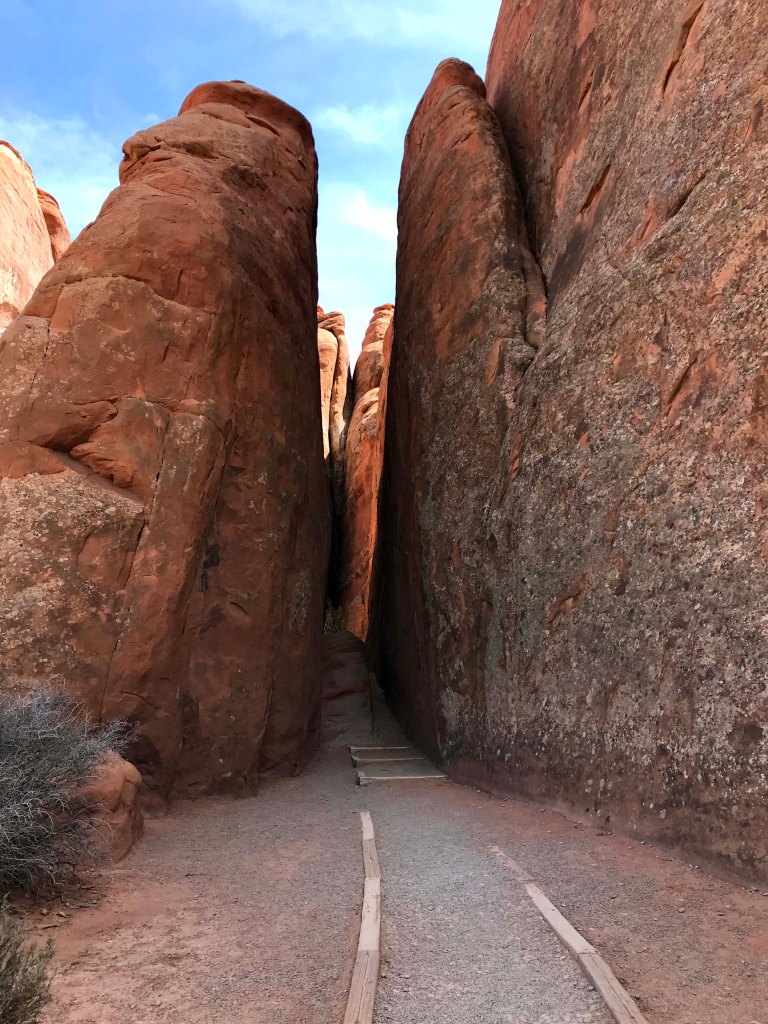 These are impressive in person but generally hard to photograph

After the visitors center we headed on the drive, and I will say in advance I loved everything about Canyonlands.  There was no cell service anywhere, but that didn’t matter, as we explored the Needles rugged and natural beauty.  This is exactly the type of landscape I love, and the relatively light crowds made for a great day.  Plus there are tons of hikes, many of which are strenuous but have spectacular views, but also lots of areas where you can just get out and walk around, and by the end of the day, I wanted to immediately plan going back and staying longer, which is the hallmark of a really great park.

The rock on the right is called the six-shooter, and there are two of them.

You can see the wooden shoe arch from far away, just a little right of center.

Picture with my long lens

At the suggestion of the Park Ranger we went down a 4×2 friendly dirt road towards Elephant Hill to get some great views of the needles.  The road was fine, if a little tight, but the views were spectacular and I highly recommend going that way. 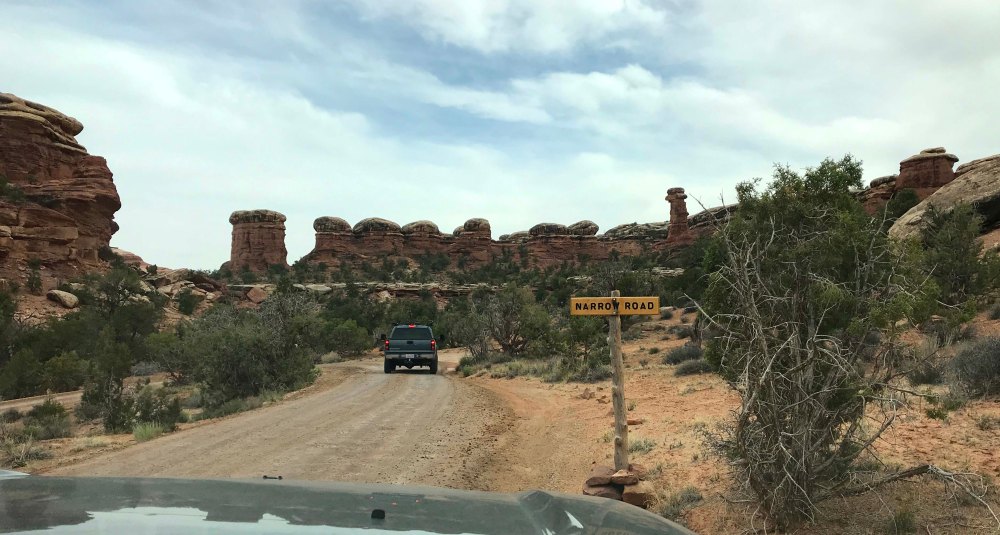 They were huge and so many of them 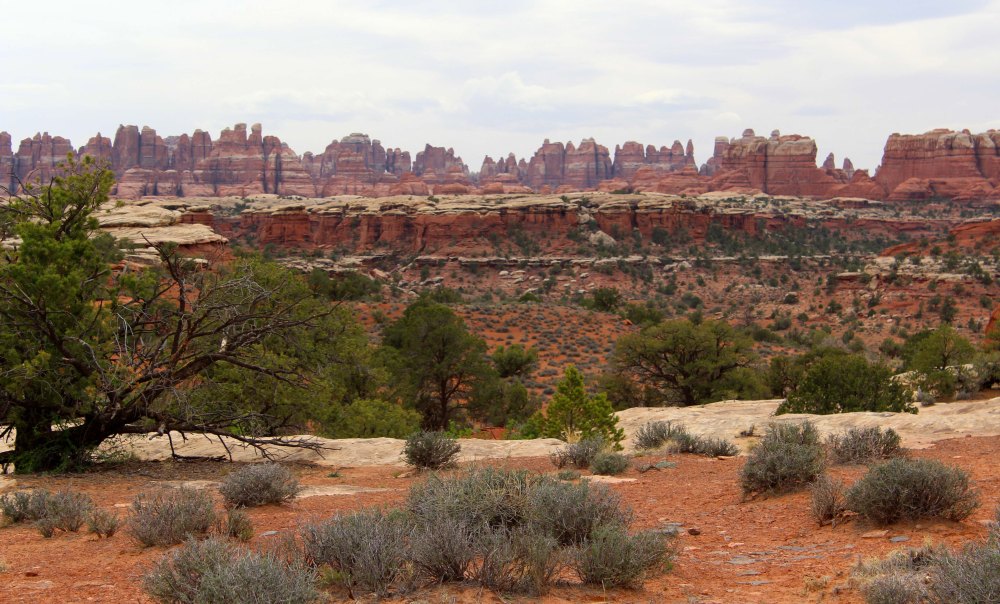 Of course the Needles were really cool too 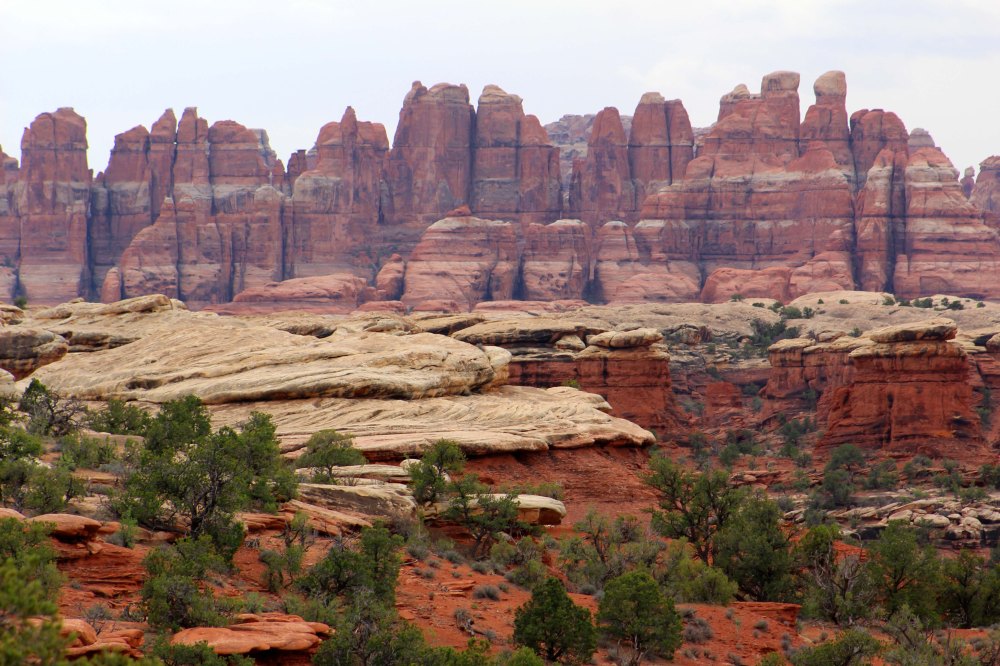 It was hazy in the background so couldn’t completely capture how vibrant these were.

After going down the side road, we continued on the main scenic drive and camp to the Canyonlands campground.  Campground B is all walk-ins but Campground A allows reservations in season and although many of the spots are too small for us some would work.  Even though there is no internet at the site, the campground was absolutely fantastic, with the added benefit of being in the park, which would make some of the longer hikes easier to do.  We vowed that we were absolutely going to come back and stay here and I made a note in my calendar to remind me when to call and make reservations for next year.  By the way, in Campground A we thought Sites 1,3,4,and 7 would all work and we really liked 12,16, and 17.  Here’s a pic of one of the smaller sites, but it gives you an idea of what they are like. They even had a group site, Squaw Flat, that would fit 3-4 big rigs and had a nice common area among the rocks.  All dry camping of course, but wow, the views.

They are all tucked among the rocks

Just as we were thinking it couldn’t get any better, we made it to the end of the short scenic drive.  We parked the truck and walked out on the rocks, and I am so glad that we did.  In between the two large walks there is a cliff you can walk down and you can see a small pool.  Lee even found a small cave in on of the large rocks and the views of this portion of the park were truly spectacular. 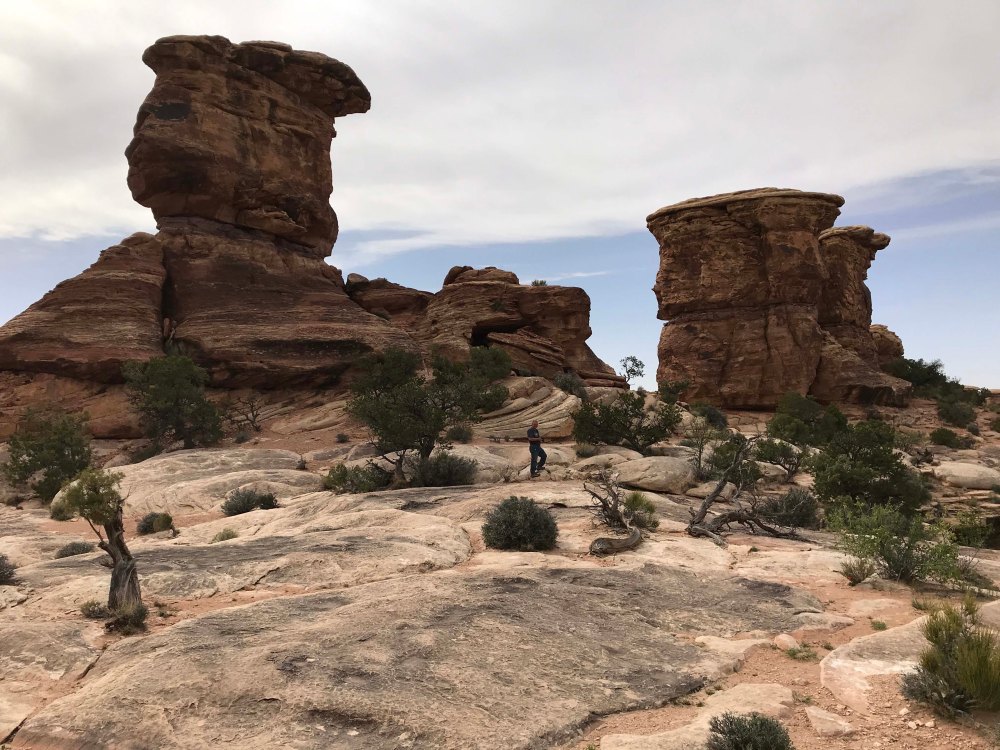 Lee walking down between the two large rocks

We love when we find one of these and the place we find them in is almost always really special.

I walked out to the edge here and looked down

And saw where the river flowed

Leading into this tiny pool captured with my long lens 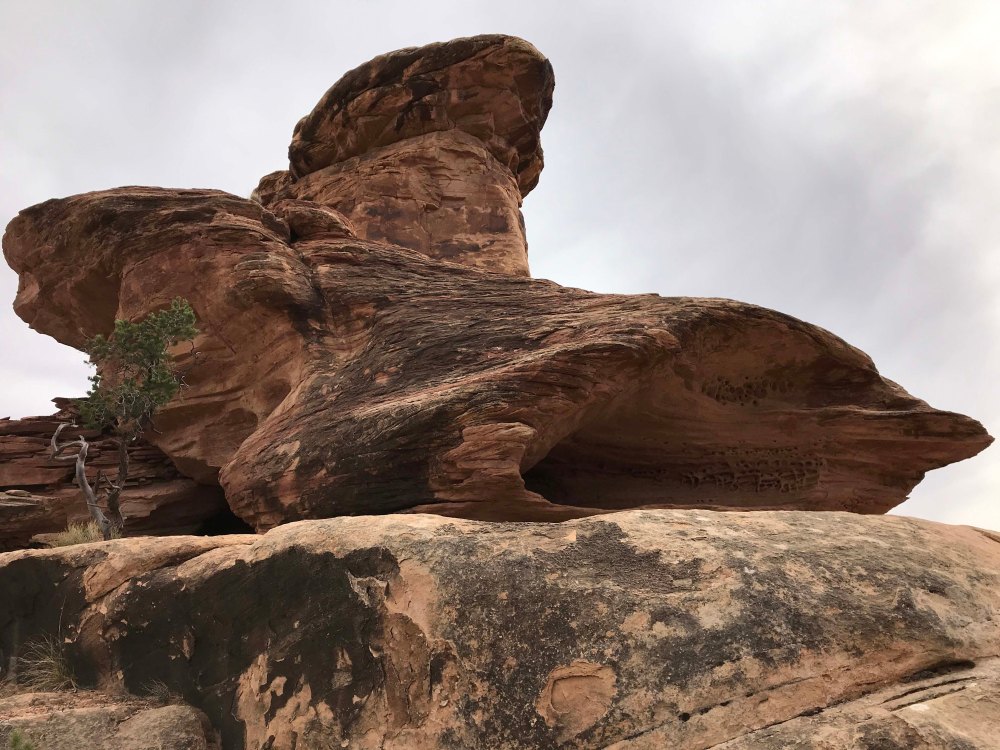 Amazing rock formations.  This one looked like a Momma and baby seal to me.

And I had to hug this super big rock. 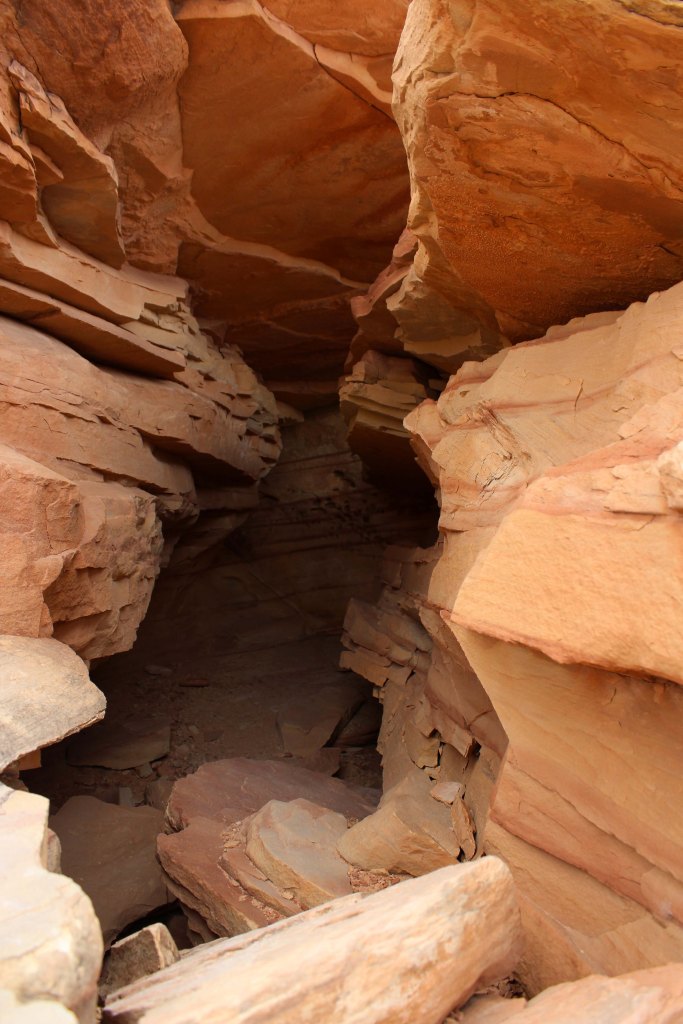 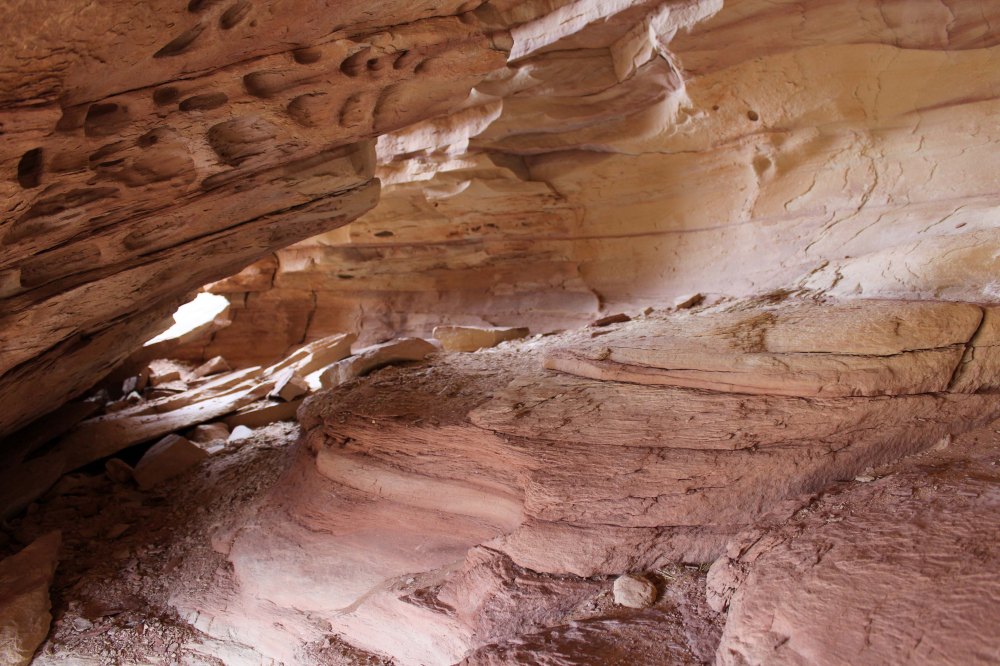 There was even light shining in, really neat.

Lee is also really great at spotting little flowers as we walk and getting pictures of them. Almost all the flower pictures you see in the blog are his.

We spent a long time on the end of the outcropping, but then as we headed back we decided to take another 4X2 road.  One of the things I like about Needles is that there are many roads you can drive through it and although most are clearly marked as needing a 4×4 there were a couple we could do in our truck. In fact there were 4 additional dirt roads we could have taken with 4×4 and renting a jeep is definitely on our “must do” list when we come back.  Today though we took the road that led to Cave Spring, and along the way we checked out several group campsites.  Unfortunately for us these were all tent sites only, which was a shame, because they were really in some beautiful spots, but at one of these we saw a sign posted that there had been a bear in the area.

All of a sudden Mr.-Walks-To-The-Edge-Of-A-Cliff in the wind to take crazy pictures gets nervous.  I couldn’t help it, I started laughing, and said I would take a bear over those sheer drops any day.  Lee said he was “sure footed, not bear footed” which was cheesy, but totally cracked me up. He quickly got back in the truck, just in case, and for once on this trip I didn’t feel like the scaredy-cat.  I like bears, and was actually glad to hear there was some larger mammal wildlife in the area, Lee not so much! (Whatever dude. Bears eat people. Cliffs don’t. – Lee)

Despite the “bear scare” we were both fully committed to returning and I even said as we left that this area might be my new favorite national park.  So far that distinction has been held by Glacier, but the wildness, lack of crowds, and extreme beauty of this park really spoke to me. And this was only the southern half of it.  In order to explore the northern part of the park we needed to enter from another direction (the roads don’t connect), and on the spot I changed our plans for the next day so we could see Canyonlands – Island In The Sky next.

(Sure, it looks pretty, but there a hungry bear in there somewhere. – Lee)