It was windy as forcasted the next morning, and Lee was outside waiting for Harry and Vicki to leave because he wanted to pay forward the favor Steven had done for us, and take a picture of Harry and Vicki’s rig as they left. When he noticed they stopped  near the entrance for a long time he walked over to check on them, and Harry told him that there was an error message on his dash about the wiring harness for the trailer and he had noticed that the trailer brakes weren’t working.

This is something that has happened to us twice (once in Alaska when Lee, Bill, and Ben had to cobble something together) and a second time more recently when it stopped working again while we drove through Texas to the RV Dreams reunion rally. Because of these incidents, Lee always carries a spare RV Blade Connector plug

(only $6.41 on Amazon) and because they are universal he was more than happy to give it to Harry.  I have included the link above, and seriously, do yourself a favor and buy one of these.  I think we have proven that you are bound to be in an inconvenient place when one fails!

Before Harry replaced it, Lee recommended making a diagram of the wiring before removing the old one.  Lee had learned the hard way that even though the connectors are universal, the wiring colors are not always, and it was much easier to wire the new one if you knew which wire went where.   So they did that and then replaced the connector pretty quickly.  It was especially impressive because they were outside in the crazy wind, but that didn’t phase either one of them.

Vicki and I, on the other hand,  stayed in her truck and were talking and laughing until they were done.  I know we got the better end of that deal, which I was totally fine with, and it was nice getting some more time to talk before they left.  The new plug worked perfectly and after testing the brakes, we all said goodbye again and they headed down the road.  I am really glad we got to spend some one-on-one time together and it was wonderful getting to know them better.

Harry and Vicki pulling out with a shiny new trailer connector, and on the way to their next adventure!

By the time Lee finished and we got settled back in our RV, it was really rocking in the wind.  Lee said it felt a little like we were in a boat in high seas and the motion started to get to both of us a little. Ultimately Lee put  rubber wheel chocks

between our trailer wheels, lifted the back jacks, and lowered the front, which helped a little.  We really didn’t want to just sit in the rig though, and since there was lots of blue sky (despite the wind) we decided to give The Valley of the Gods a try.  We were hoping that it would be less windy at lower elevation, which turned out to be the case, so we headed out for a scenic drive.

Through sheer dumb luck we selected the entrance on Highway 163, but you can also access the road on Highway 261 just south of the Moki Dugway.  After traveling the road I absolutely recommend going in off 163, and maybe even turning around and going back that way, because I found the second half of the trip pretty miserable.  The first half of the road was absolutely incredible and definitely the views earned the Valley of the Gods name.  I did the best I could, but the pictures absolutely don’t do it justice, and since the drive is only a couple of hours, it really isn’t something that should be missed. 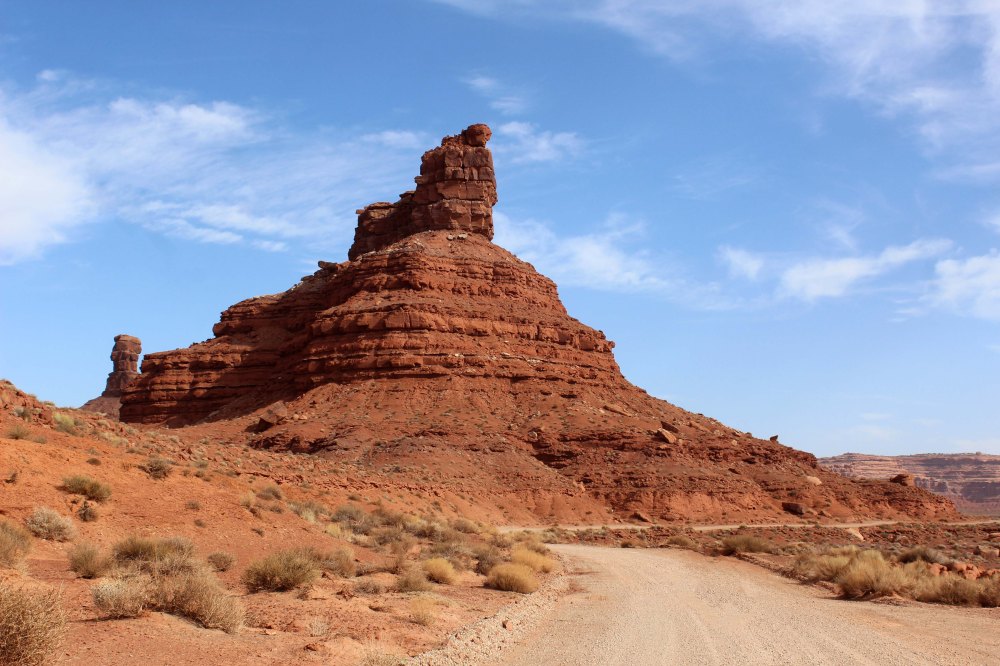 Yes, it was that red. 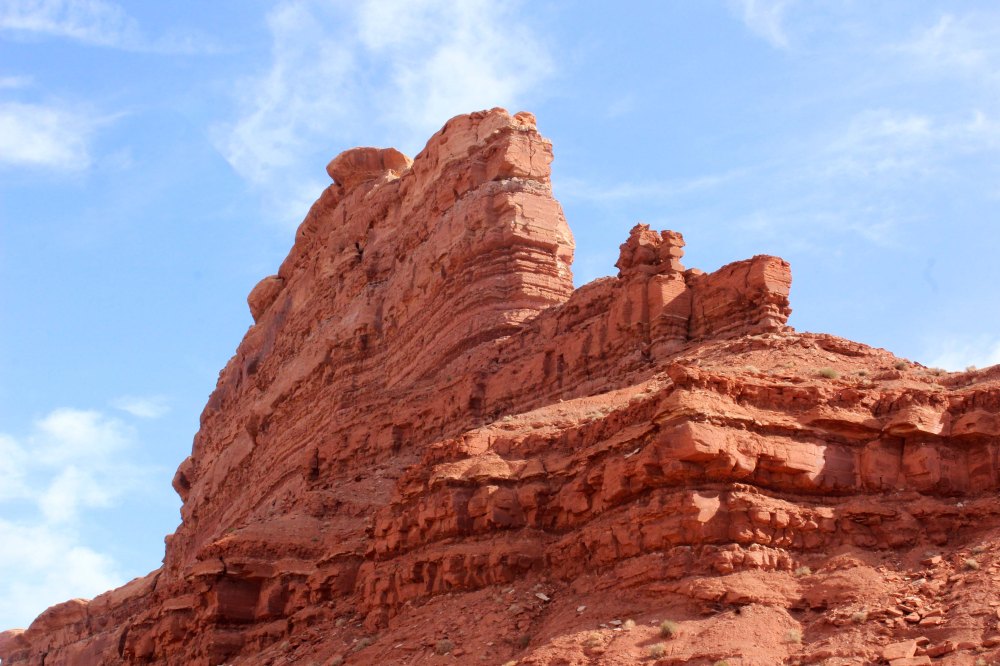 The rocks were beautiful, both from far away and closeup, which isn’t always the case.

Despite the wind it was a perfect blue sky day

These two rocks were like sentinels at a gate.

Panoramic of the entrance to the best section

The road was really great until this point and friendly for a big rig, then we hit a dry creekbed. The drop off was much steeper than it looks. 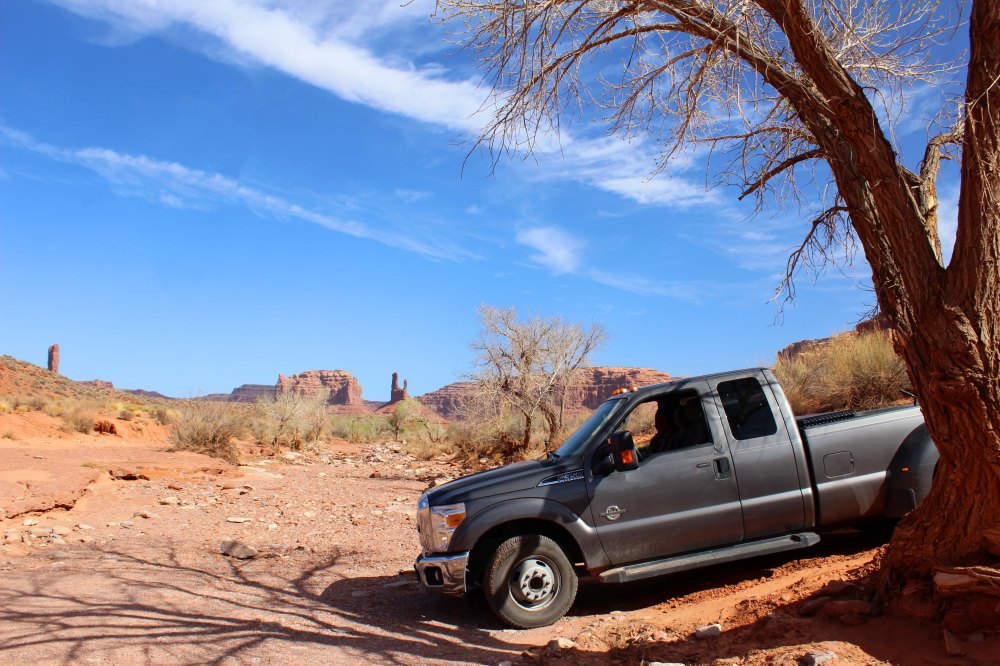 Definitely wouldn’t want to bring a rig through here, because we took it slow in our truck due to low clearance.  Lee went slowly on the left side which had a little more gravel and we did OK.  This was by far the worst spot, and our 4×2 handled it just fine. 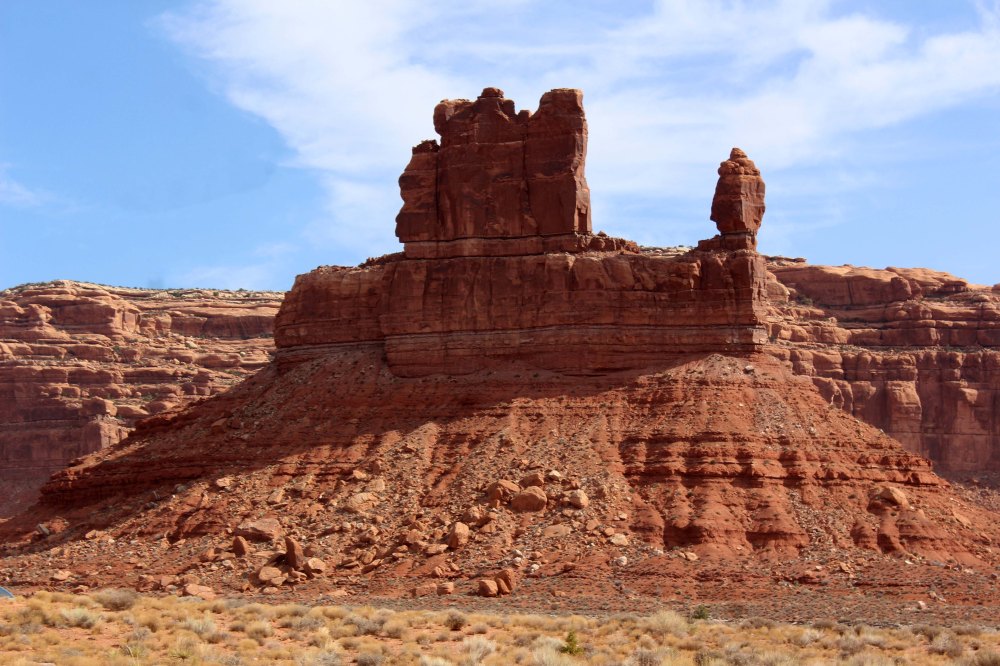 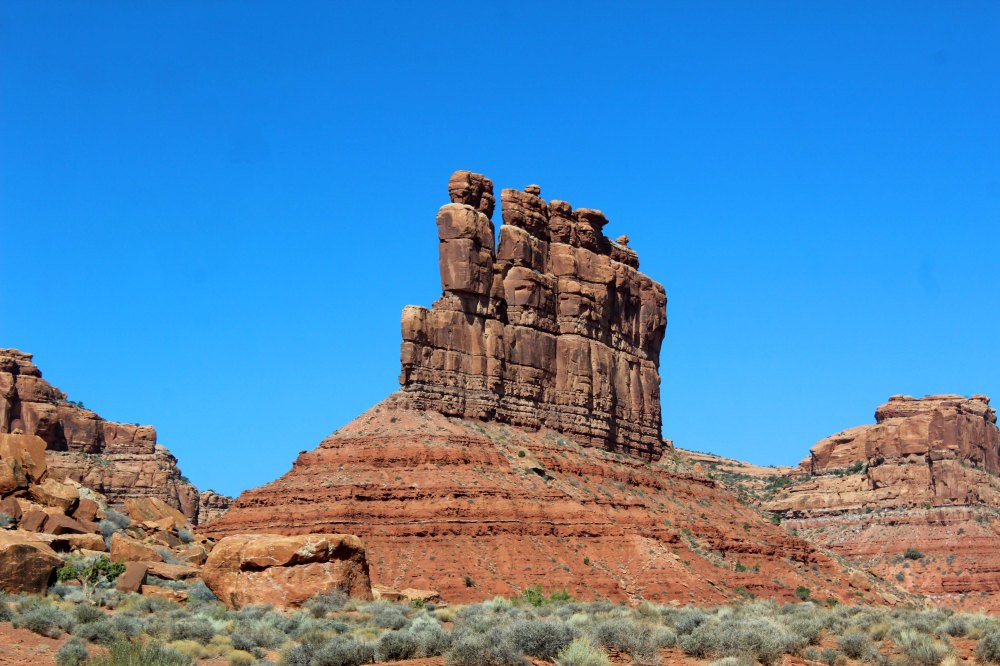 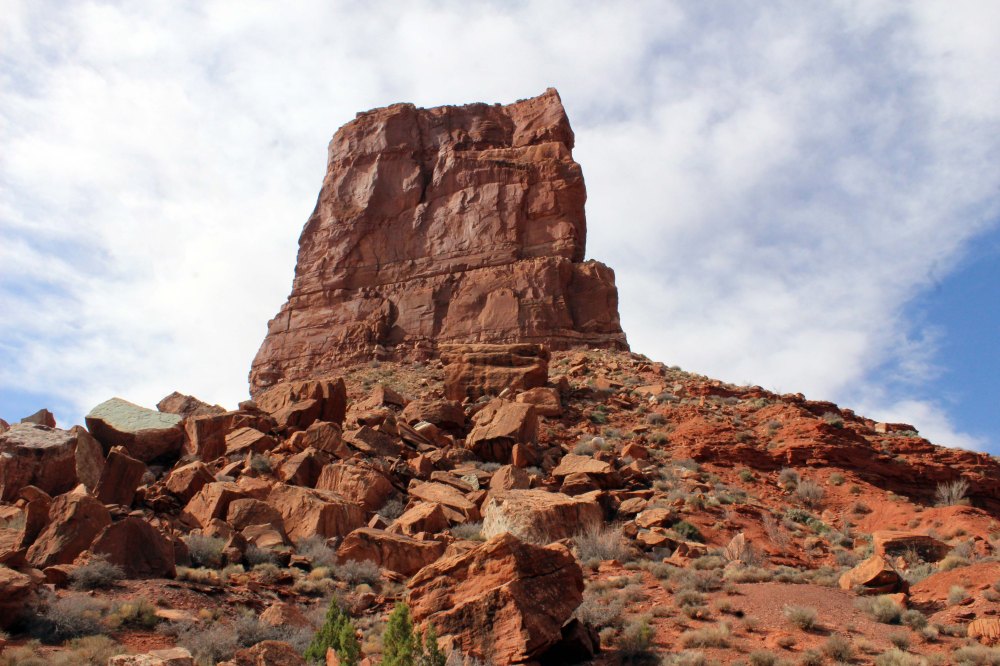 The boulders at the base were taller than me.

Unfortunately after we got through the great section the road got really bouncy. Lee wanted to turn around and do it again with the Go Pro, but I actually had to pull a veto on that idea. The first half was absolutely tremendous, the second half not so much, but I would absolutely do it again, just maybe turn around and drive back the way we came once we’re past the good part.

You can also boondock in this area, which many friends of ours have done and liked.  If you do, I wouldn’t go too far from the 163 highway entrance with the big rig unless you have a second vehicle to check out the road conditions.  We liked it so much we even briefly discussed moving down there from Gooseneck, but moving is a pain, and we were pretty happy at Gooseneck Park.    Next time though we might check it out, because it would be nice to spend a little more time there walking around.

2 thoughts on “First Time Visiting The Valley of the Gods”