Sorry for the melodramatic title, but while I was sleeping this morning Lee got a visit from a new company man who told us we were done at this location.  Although we had heard that this is the way it happens in the gate guarding biz it was still a surprise as we would have thought they would have contacted the gate guard company before us. Keep in mind we took this gate over in mid-process (it has been open since October), so I suppose we shouldn’t be that surprised that all of the work finally got done.    Lee referred the gentleman to our coordinator and then sent her an email and waited for me to wake up.  To his credit he didn’t hit me with it pre-coffee (which is not a pretty sight) and allowed me to wake up a bit before he told me.  Then while I was taking my shower he called our coordinator who said she did get the email, and for us to stay put for the time being. There is quite a bit of caliche truck traffic here during the day and still some traffic for the well at night, so they are reaching out to the landowner to see what he wants to do.  We are in a wait and see mode, although we are starting the prep to roll out of here tomorrow if necessary so just in case I thought I would complete my blog post on West Texas.

We have driven through West Texas, but never spent any time here and I have to see it is unlike any area I have personally ever been in.  Our little corner spot, right near the border, is actually not too bad.  We have lots of wildlife in the specific area and the view goes on for miles.

You can see our camper in the middle right of the picture. Nothing as far as the eye can see 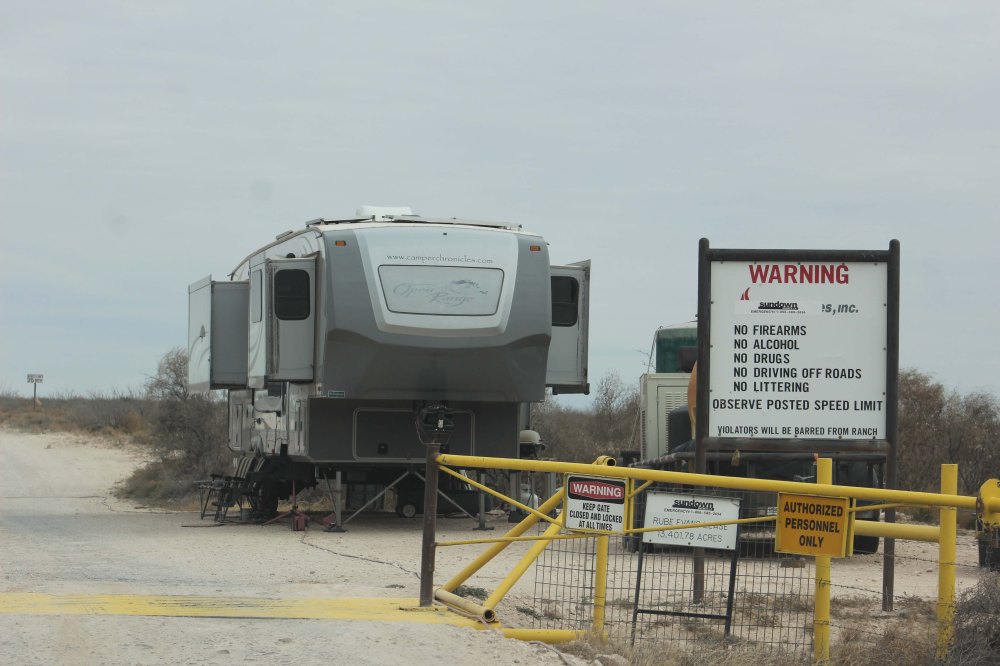 And some kind of a mouse/rat that lives right across from us.  So far he is staying on his side of the road.

And the sunrises and sunsets are really beautiful

So we like the particular location just fine, but of course we do need to access service from the nearby towns and that’s where it gets a little rough.  We are about 7 miles from Jal, New Mexico (pop 3034) and about 20 miles from Kermit, Texas.  The closest real town is Odessa which is a full hour away so we need to use these towns for the basics and the post office.  We’ve actually been in this situation many times, and I wrote a post about rural america last year when we were near Dilley, Texas but as I said, this is really different.  The biggest difference is the land here is primarily being used for oil and gas and there are no crops or livestock that we have seen.

These gas plumes have a pretty unpleasant smelll

And there are these refineries(?) sort of randomly placed along the landscape

There is obviously money here, you can see it in the number of people working, and the infrastructure, so it is surprising to me how run down these towns are.  All these folks have to live and eat somewhere and like us an hour drive into Odessa isn’t really practical.  After getting settled in I decided to go out and explore a bit so the first place I went to was Jal, which is the closest.  We had some friends who said they might want to stop on their way to Arizona, so I wanted to check out if they had an RV park people could stay at.  We have been to oil towns before in the Dakotas and they usually have some sort of infrastructure, but it was clear pretty quickly that would not be the case in Jal. 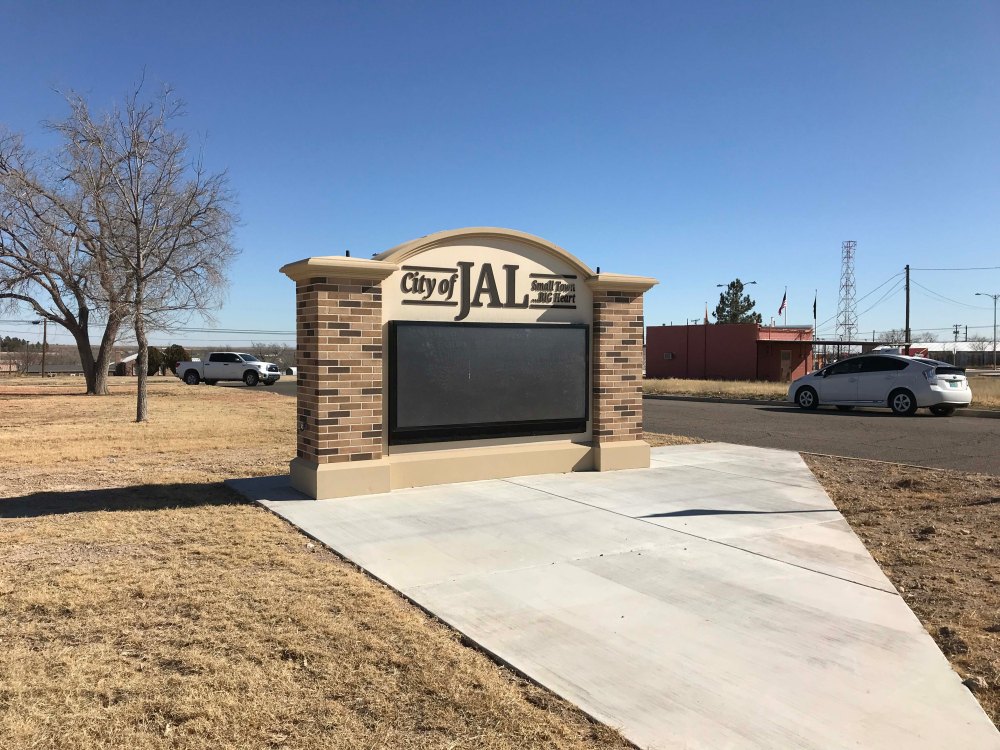 The town of Jal 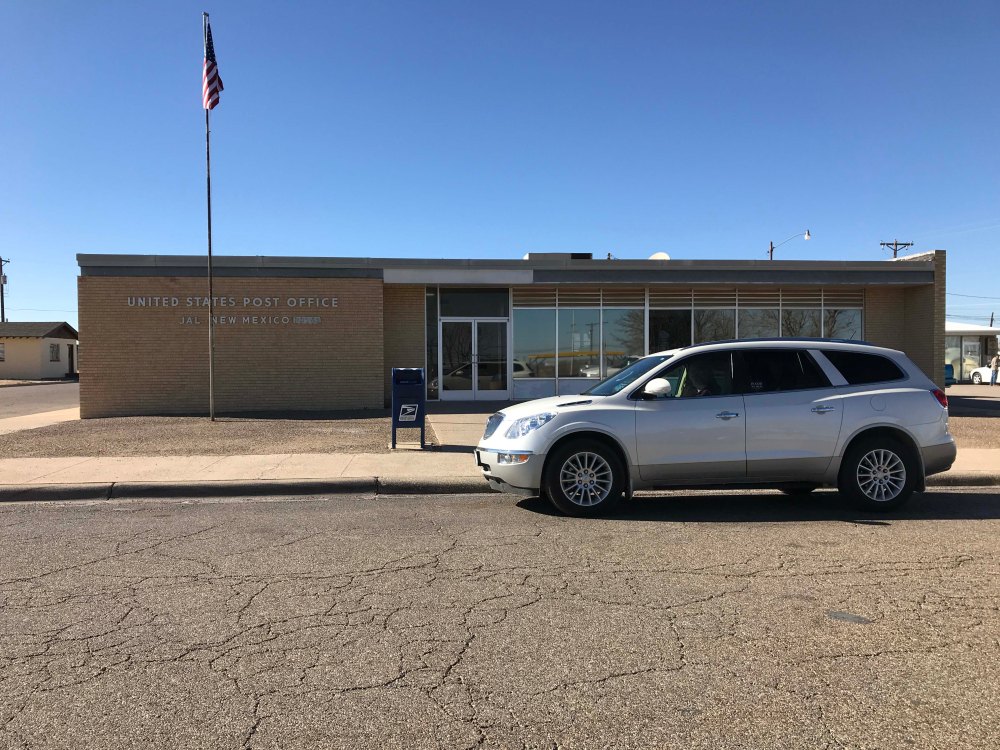 The local post office has been great allowing us to have our mail sent and holding it for us.

The town does have a beautiful library which was funded by the Woolworth family. Apparently they had a homestead here

But the rest of the town is in pretty rough shape 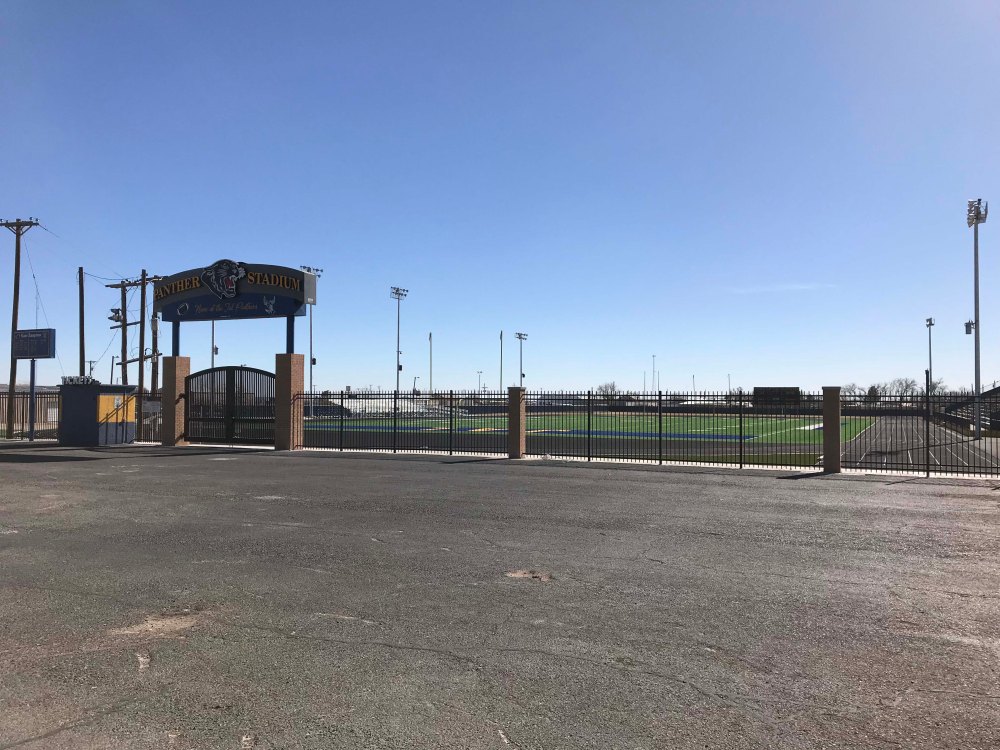 Except for a million dollar football field, which looks really incongruous surrounded by such poverty.

Amazing football field but this is the city park?

The whole town has a Friday Night Lights vibe, which is not surprising since that screenplay was written about the Odessa area, but despite loving that show and watching all the episodes I still found it surprising.  People seem unhappy, despite the availability of jobs, and it doesn’t seem as if that money is flowing back into the community.  A great example of that is the local country club.  There is actually a golf course here, which surprised me, but it is in a neighborhood surrounded by falling down houses. there was even a German Shepherd, with a trailing leash, that ran out into the road and tried to bite my tires as I drove by, which was a scene straight from a movie. 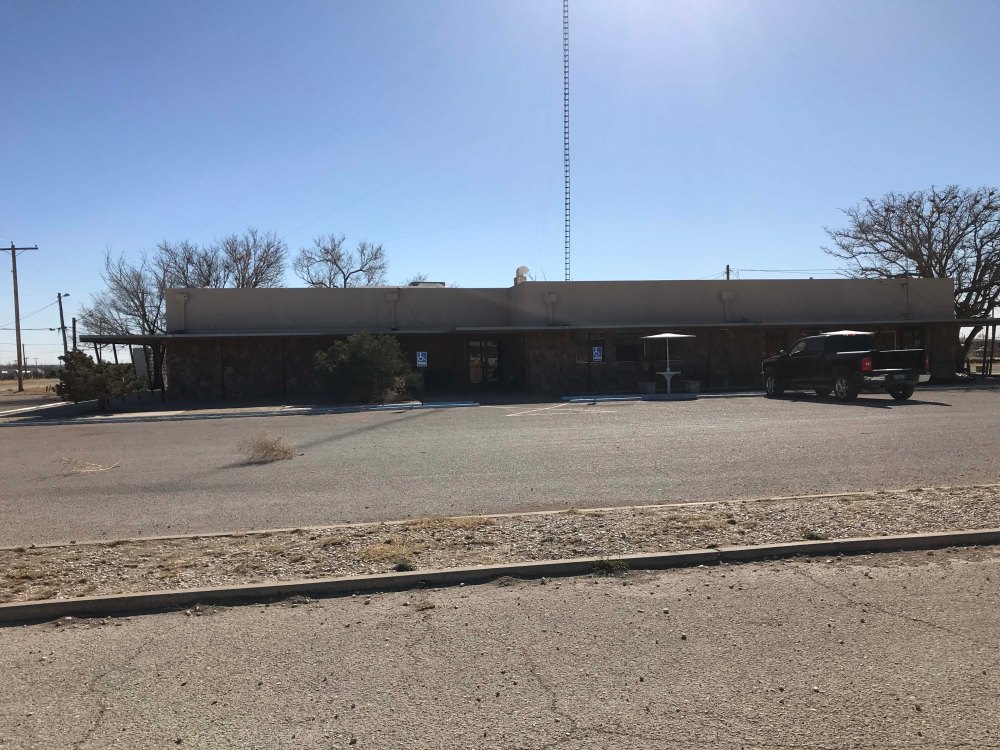 This picture sort of sums up Jal, New Mexico to me.  The golf course borders the oil containers.

After visiting Jal I decided to go farther afield and check out Kermit, still looking for a place our friends could stay.  Although Lee said it was more of the same, I thought I might have better luck so made the 20 mile drive south.  In my mind Kermit was actually worse.  It was a rough place and although the grocery store was nicer, the air of poverty and neglect was even more pervasive.  They also had a large football field, although not nearly as nice as in Jal, but their library was tiny and the Dollar Store was the worst I have ever been in.  The shelves were half empty and there was product on the floor and shoved into corners and it was really dirty.  I have to say I was surprised by that, because usually the dollar store in small towns is one place that is thriving, but not here.  As I said it was a rough place.

The town did have a skating rink which was packed at 2:30pm. My first thought was did they have a bar inside, which is kind of mean but I had to wonder. 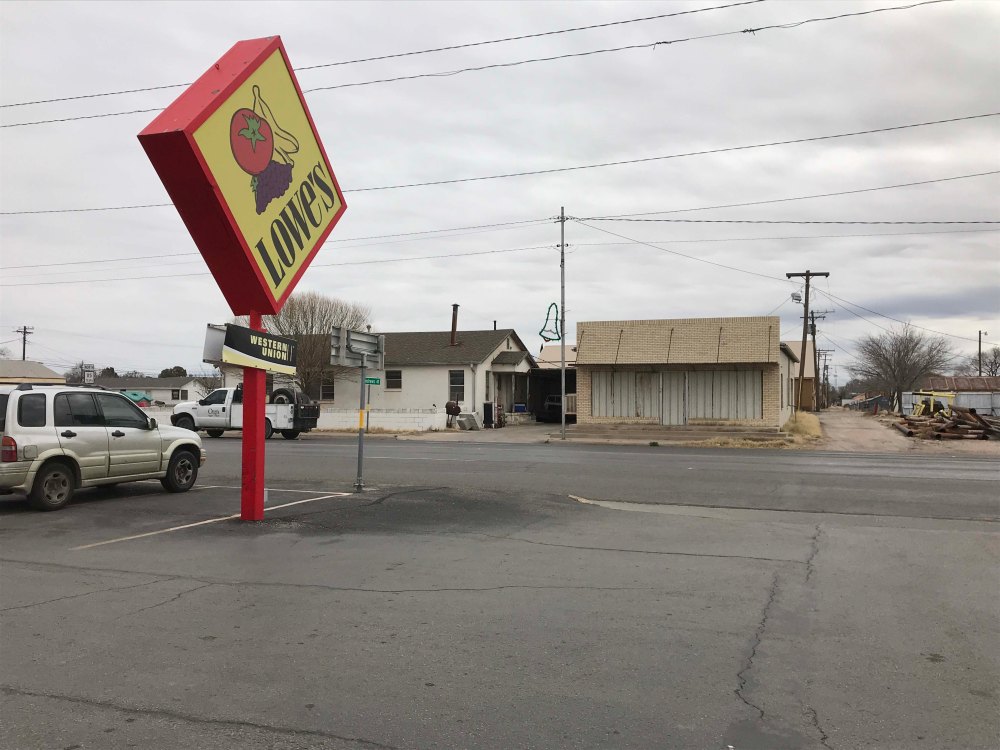 The inside of the grocery was light and well maintained but the people looking there seemed pretty unhappy. You can tell a lot about a town from the local grocery store 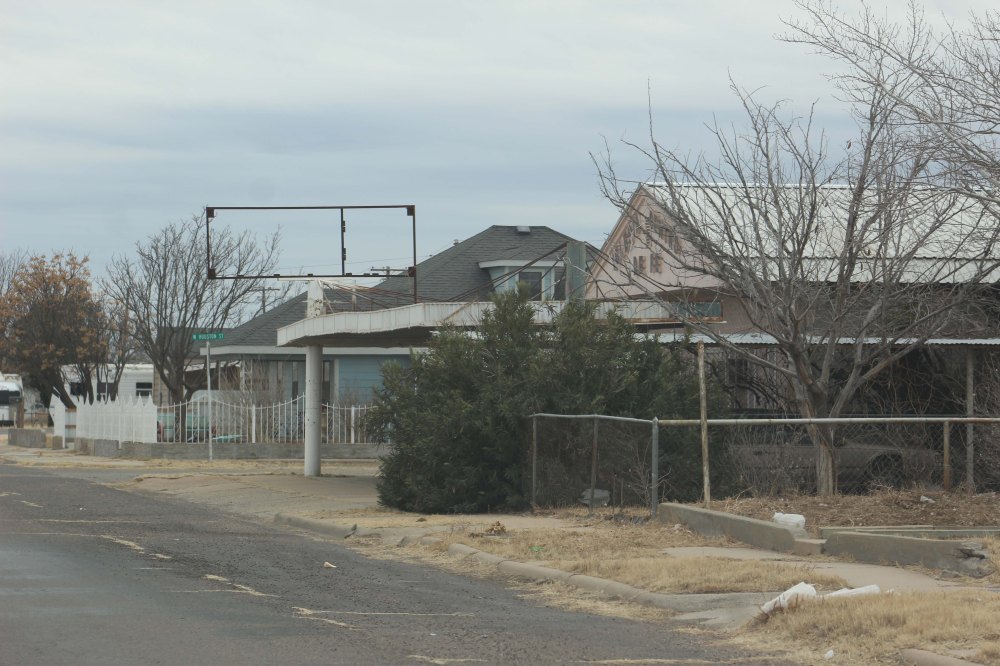 Most towns have sketchy side streets, but this was on one of the main roads. 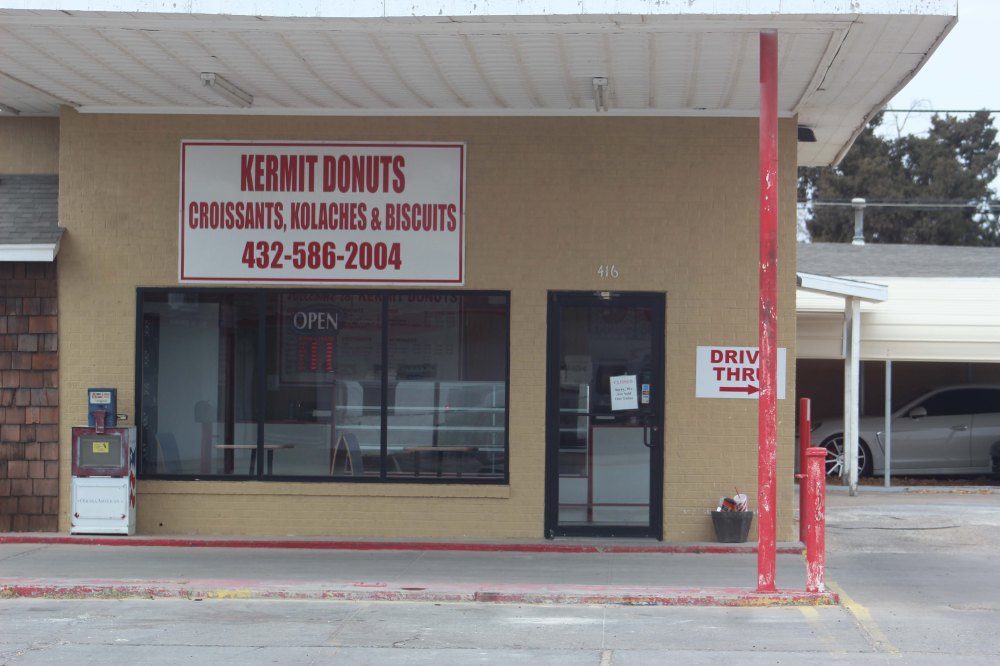 The local donut store, which was closed when I got there, was one of the few businesses on main street

Kermit did have two small nail places and a hair cutting place (all with bars on the windows), but it definitely had a vibe and did not look like a place I would want my friends to stay. And I am not kidding about that.  We are all used to rural and even rustic, but unsafe is a whole different thing.  So I need to tell Kat and Bert they will have to visit us another time, because although they might risk it, I wouldn’t want them to.  I guess I wanted to share this because there is a perception that we move from beautiful place to beautiful place, but when you work that isn’t always true.  Usually I like going to places that are lesser known and really immersing myself in the local culture, but that is not going to happen here.  Which is OK, because first and foremost we are here to make money, and $175 a day is nothing to sneeze at.  Plus as I said our little corner is just fine, but I do think I’ll have Lee go into town from now on.

Quick Update.  We just got the call that we are officially released today.  Although they offered to let us go to a yard in Midland, we decided to head back over towards San Antonio so we can see Cori and Greg and Kat and Bert.  It’s kind of a long drive, especially if we end up coming right back out here, but it’s worth it to us to get some time to see friends.  We need to wait until tomorrow to drop off our paperwork, and then we will be heading out.  Not sure what will happen next, but I suppose that’s part of the fun.  I’m just grateful we made a little money and had some time to get some things done.  We will see how this all plays out.

9 thoughts on “Are We All Done Here?”