I travel with what I think of as a a “Big Bucket List” and a “Little Bucket List”.  The Big List are things I knew about and wanted to do even before becoming a full time RVer, and the Little Bucket List are things I only learned about once we started researching the lifestyle.  Little bucket list items are rewarding because I probably would have never even known about them if I wasn’t part of this community and traveling, but Big List items really validate for me what a great choice we made in this lifestyle.  I mention it because Crater Lake was definitely a Big Bucket List item and the number one thing I wanted to do while we were in Oregon.

What I didn’t understand was how far away Crater Lake would be from our temporary home. Even with our new tent and spending the night, a solid 5 hour drive is a stretch. Thankfully our friends and fellow RV Dreamers Bert and Kat were doing their first ever month-long volunteer stint about 45 minutes away from Crater Lake, so a plan was born to travel down and spend some time with them, and see the lake.  Initially I wanted to camp near the park, but they were totally booked in the month of July and the first come/first serve sites usually fill up before noon.  That wouldn’t work for us since we wanted to come down Monday night after work, so Kat and Bert asked their boss if we could stay on their site.  Happily he said yes and on Monday night we headed down to Klamath Falls.

Beautiful tent site, and I loved this old tree, plus we had electric and access to a bathroom.

They are volunteering at a wildlife area.

Where they plant trees, weed, build bird houses and other fun nature stuff. 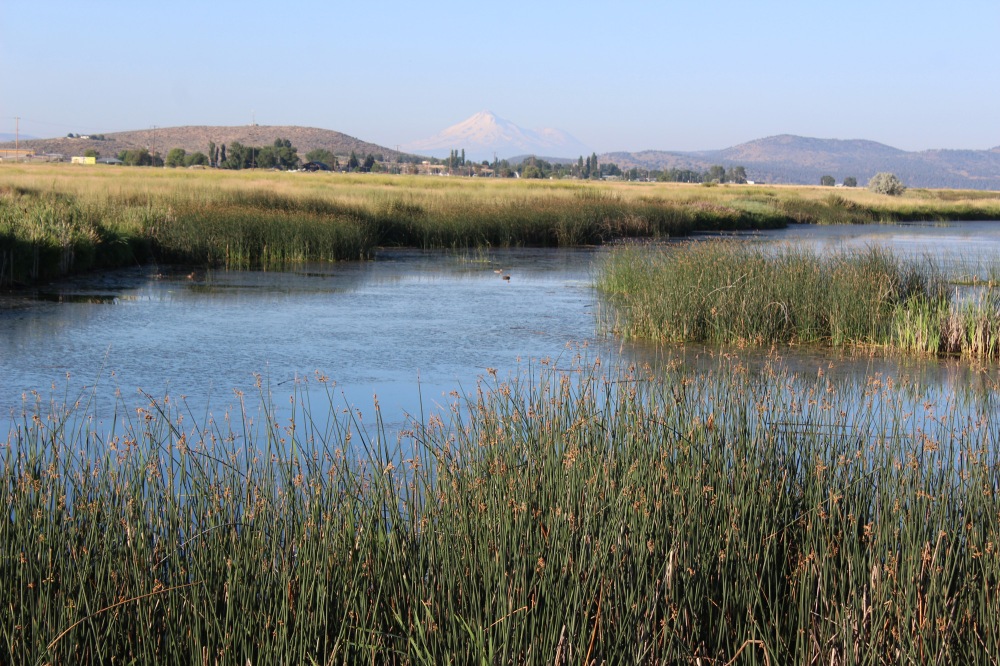 Plus beautiful views of Mt. Shasta

I did make the mistake of leaving the rain fly off the tent the first night and even with the heater it got very cold.  Cold air “poured” into the tent (they made fun of me for saying poured but that’s what it felt like) and I didn’t get the best night’s sleep.  I drove 15 minutes into town and got myself a McDonald’s breakfast sandwich to start the day and when I came back saw they were gone getting Lee a HUGE cinnamon roll, so I drove down the road to the dock and took some great pictures of birds.  I saw hawks, egrets, pelicans, and Killdeer (a first for me) along with numerous small birds I couldn’t identify.  It’s basically one large marsh and depending on the time of year sees heavy bird traffic.

Oh yes, this was as big as his head. He did share it though.  The girls know their audience!

The Killdeer let me get pretty close 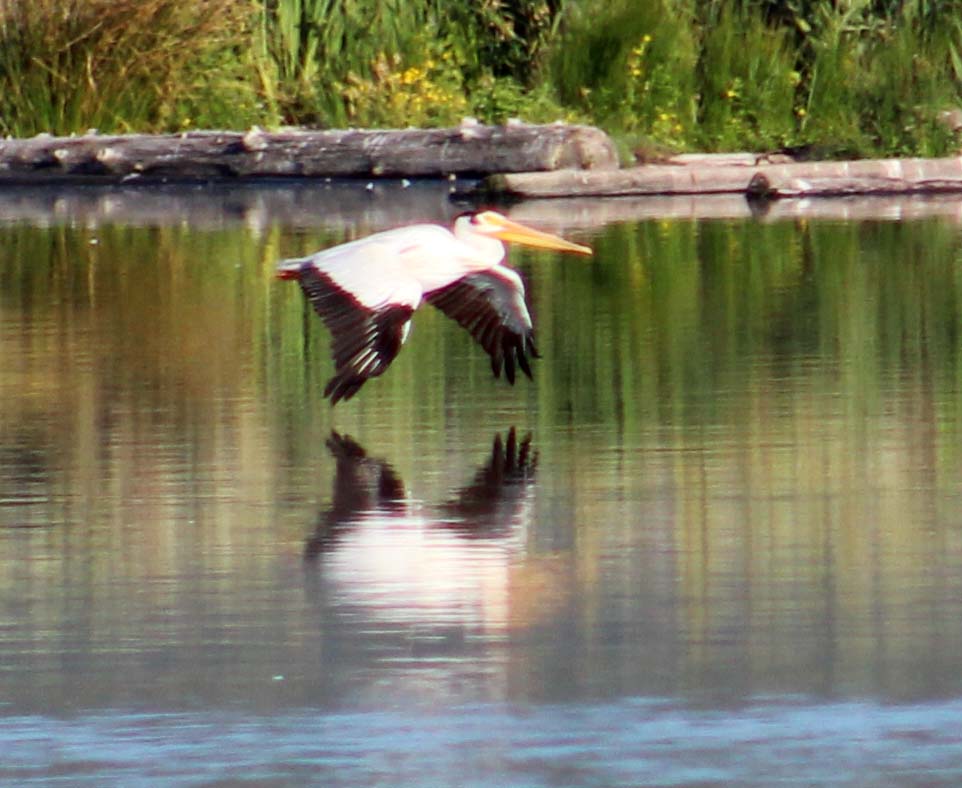 And the pelicans flying across the water were amazing

We wanted to get an early start, always recommended for any National Park, so started driving around 9am.  The drive into the lake was pretty and there were several places to stop, but nothing really jumped out at me until we saw these cool rock formations and an intensely green meadow.  The rock formations were caused by steam blowing up through the lava and it’s important to note that this entire area (including  Crater Lake) were formed by the volcanic eruption of Mt. Masuma over 7,700 years ago.

This information sign really surprised me because we have been to Lassen and had no idea Mt. Mazama had a larger impact.

Soon we arrived at the Crater Lake entrance and it was $10 to enter but free with our America the Beautiful pass. We stopped at the visitor center and wanted to watch the movie, but the small auditorium was already full.  I will say the visitors center was a disappointment.  It was very small and had very little information.  There is another visitors center in the lodge that we didn’t see that might be nicer and it was a little confusing when we came in which way to go.  The road around the rim is a circle, but because of heavy snow and a major reconstruction project not all sections were open.  Finally we determined we needed to get on the East Rim road and very soon there was a place to stop.  I will let the pictures speak for themselves, but WOW, WOW, WOW! 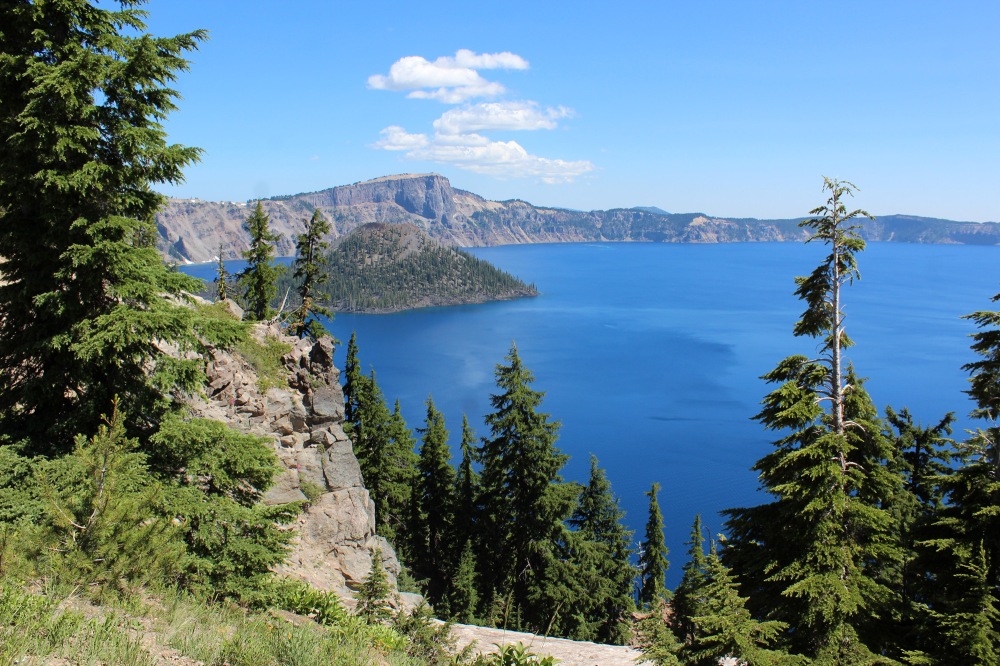 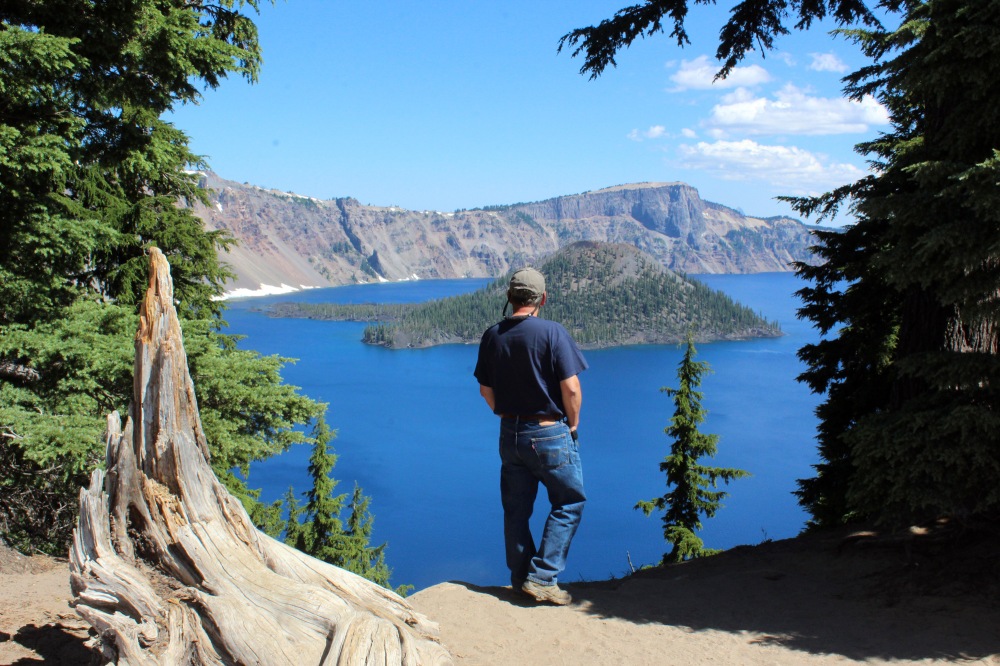 Lee and Kat walked down to the edge

What is so special about the lake is Wizards’ Isle

Which had amazing turquoise water in it’s cove

There are also very cool rock formations along the banks.  I don’t know what that light colored water is.

The neatest of which is shaped like a pirate ship, but unfortunately we couldn’t get any closer than this

Yes, the water is that blue and yes it is even more amazing than it looks.  We stopped at almost every stop and took tons of pictures, because none of us could get enough of the view.  Plus what is great about the lake is it looks different depending on when you come.  I would like to visit it again in May when the peaks are still snow covered, but in order to drive the entire road will also need to visit it in August.  Plus they have boat tours that run (you need to book well in advance) and one hike that leads down to the shore. 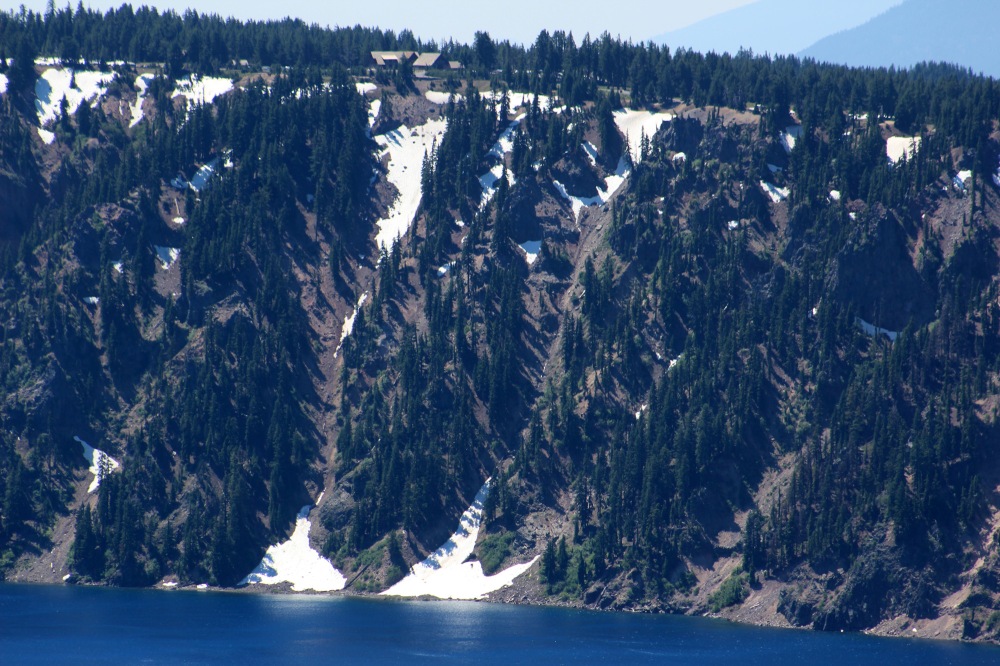 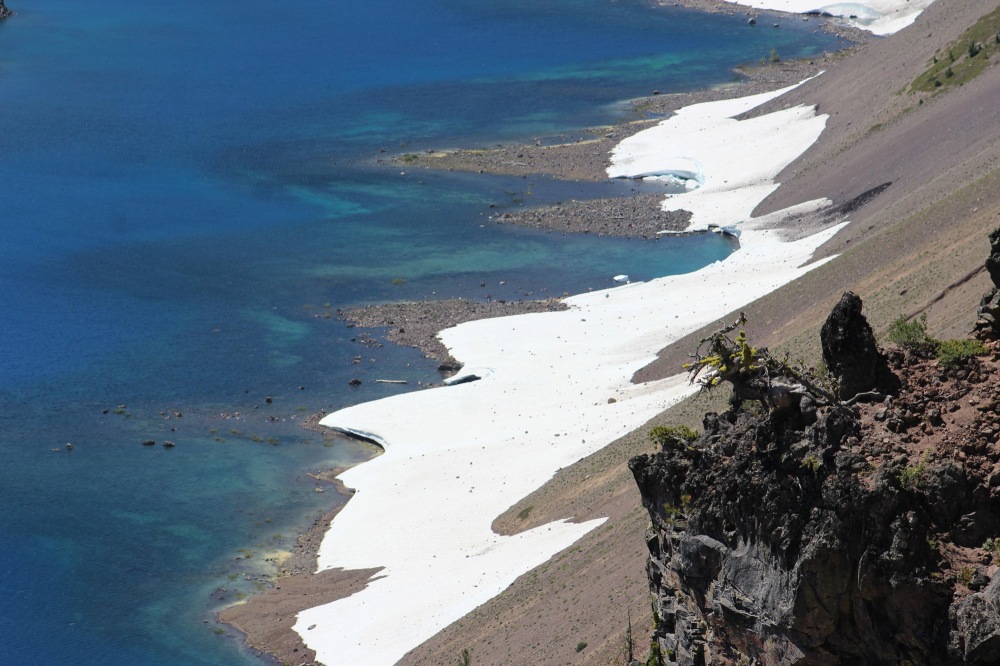 Snow along some of the banks 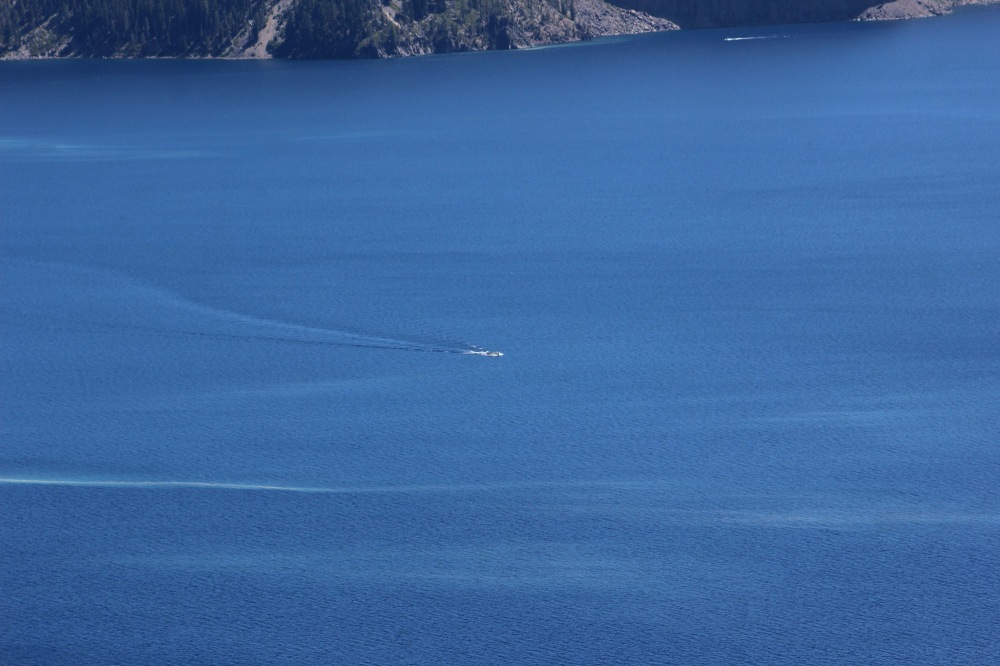 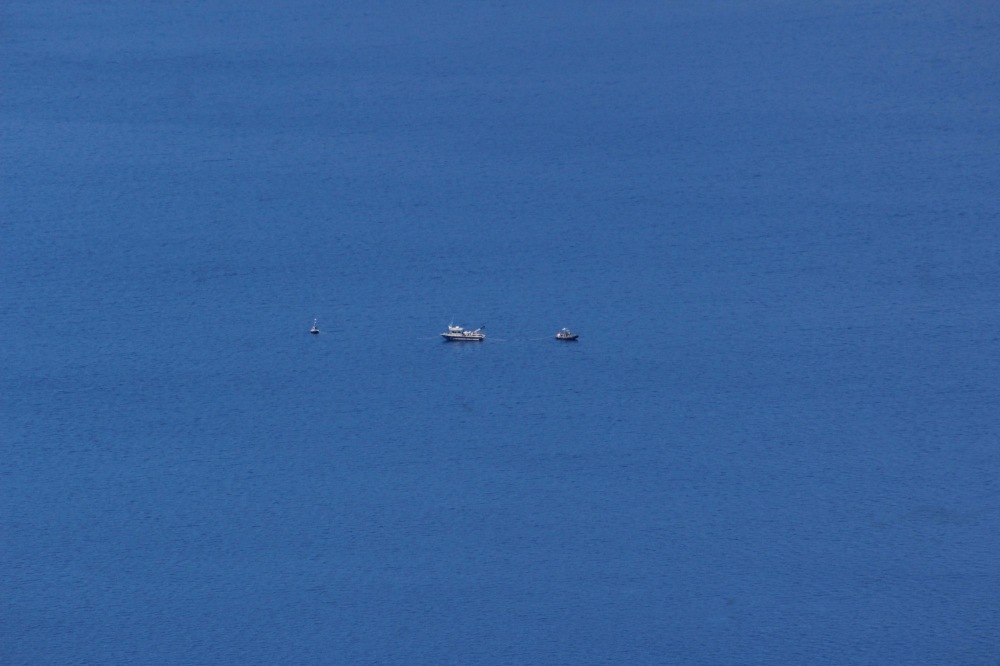 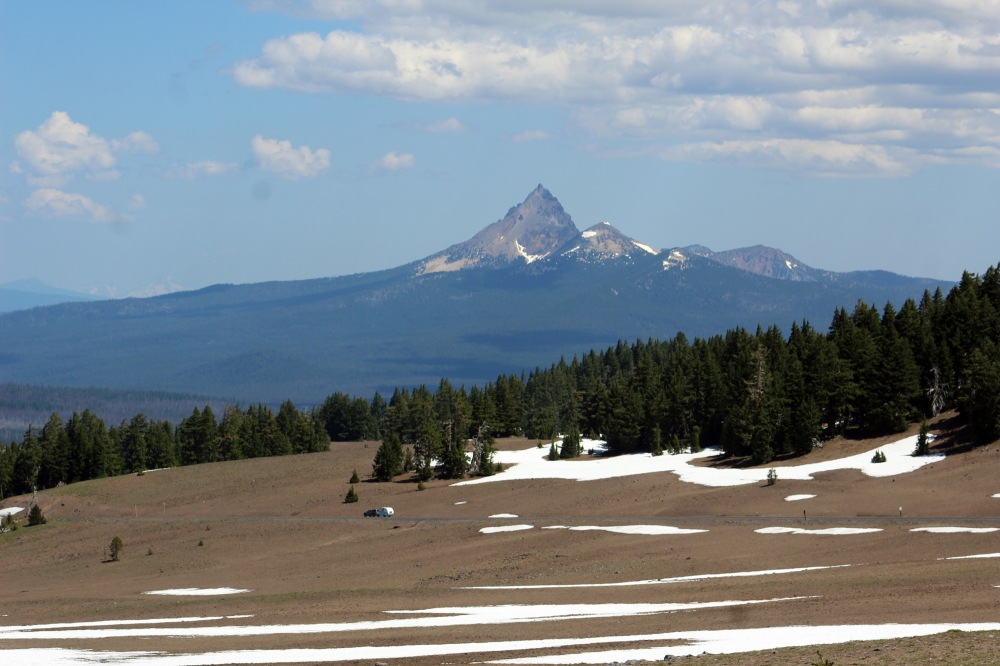 And there was beauty in the small details

The view at our lunch spot

Me, Lee, Bert, and Kat taking a selfie

Around 1pm it really started to get crowded and we had made it to Skell Point which was the last place open by car.  While we were there two couples who were frequent visitors were pointing and exclaiming, and it turned out that they were looking at the Old Man of the Lake.  This is a tree stump that has been bobbing around the lake since at least 1896 and because the lake is so huge sightings of it are incredibly rare.  One couple told us they had been coming at least once a year for 15 years and this was the first time they had seen it.  Usually I get super excited about stuff like this and I do acknowledge that it was a rare sighting, but to be honest it was a log in the lake and Kat and I were kind of taken aback by their excitement.  Lee and Bert got it though and were very into it, so here’s the picture so you know what you are looking for.  This was taken with a long lens, so you need to have sharp eyes to catch it. In reality it was just a tiny speck. We were at least 100′ above the water, and it was only visible if you stood in a specific spot. Move to the left or right a few feet and it disappeared behind an outcropping.

The old man in the lake. The bobbing up and down was pretty cool

Since it was still pretty early, we decided to take the north entrance out (and avoid the construction) and take a longer way back to Klamath falls.  Since we were in two trucks we had walkie-talkies and Bert took the lead with Kat navigating.  It’s always hard to know where to stop when you are on an unknown scenic drive, but they stumbled across two incredible places along the Rogue River and that surprise of those sites was a perfect way to end the day.  I love gorges, but this one was very special and although small was full of raging water.  Plus we had never seen a land bridge and we all thought that was really neat as well.  I’ll be honest the pictures don’t come close to capturing either experience, but Lee took some video and that does a much better job of giving you an idea of how special it was. 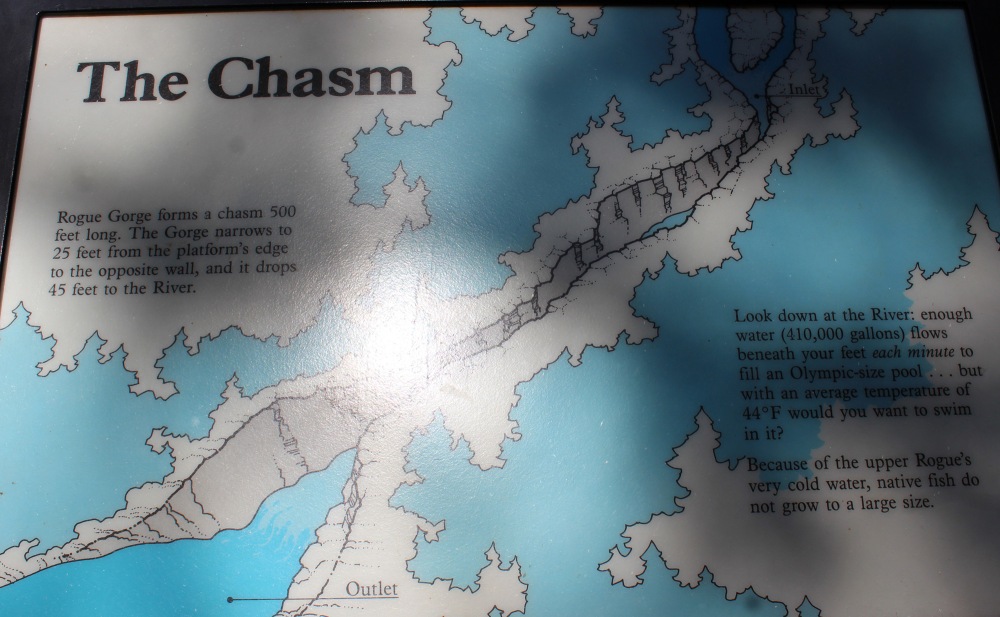 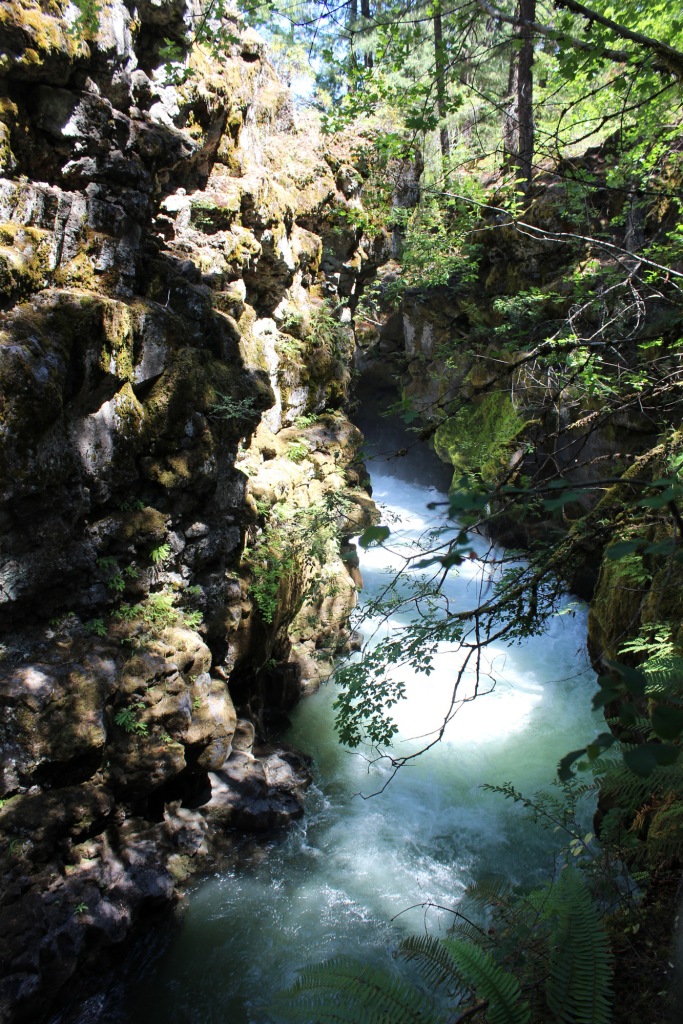 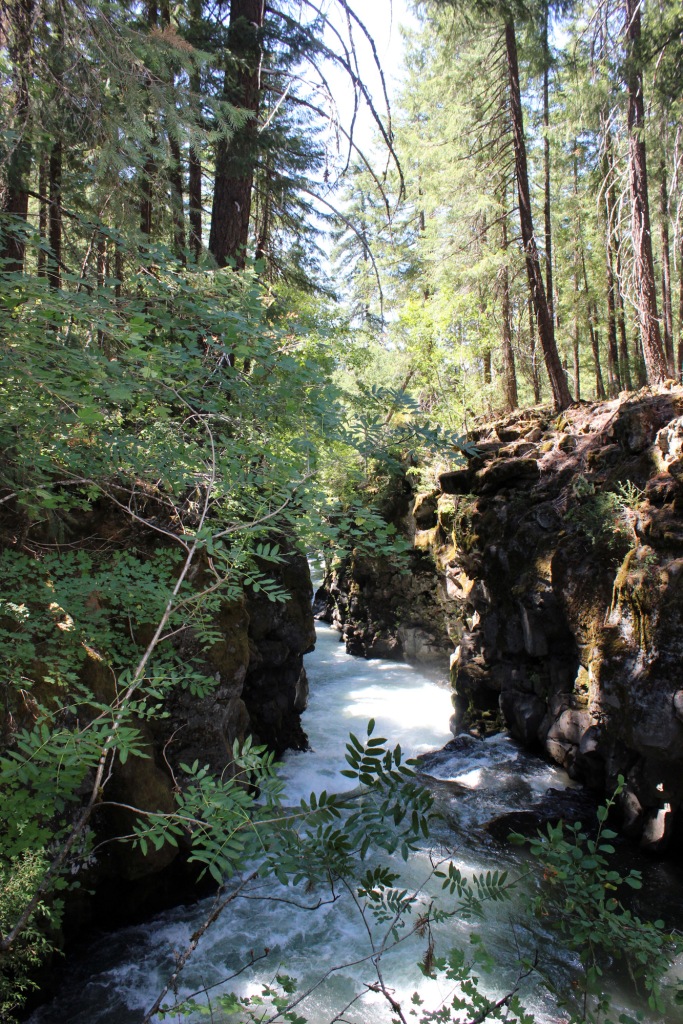 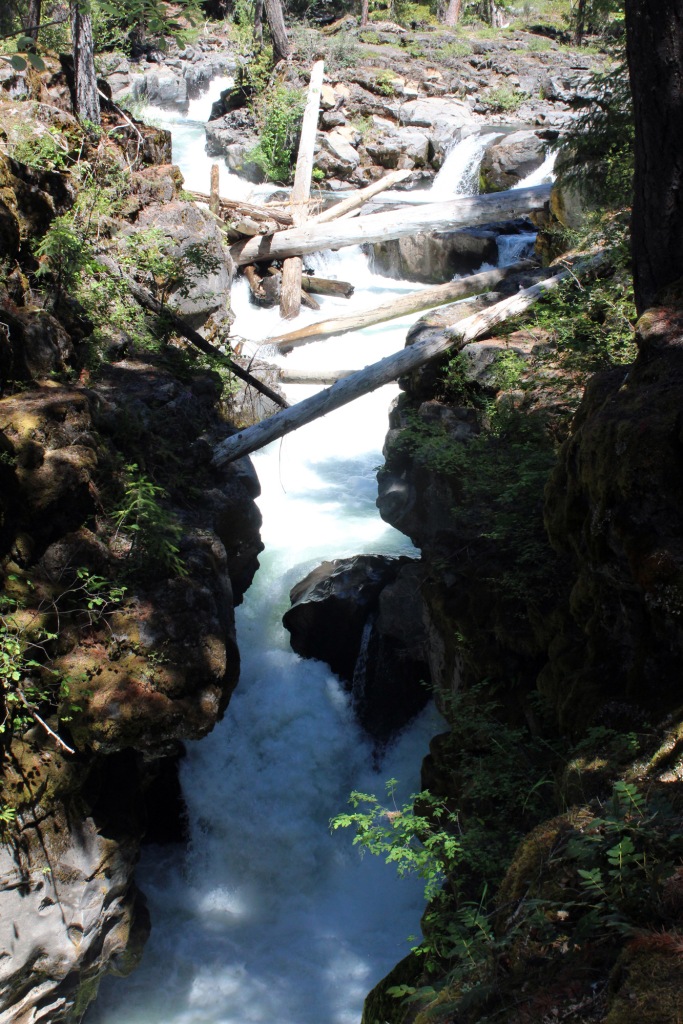 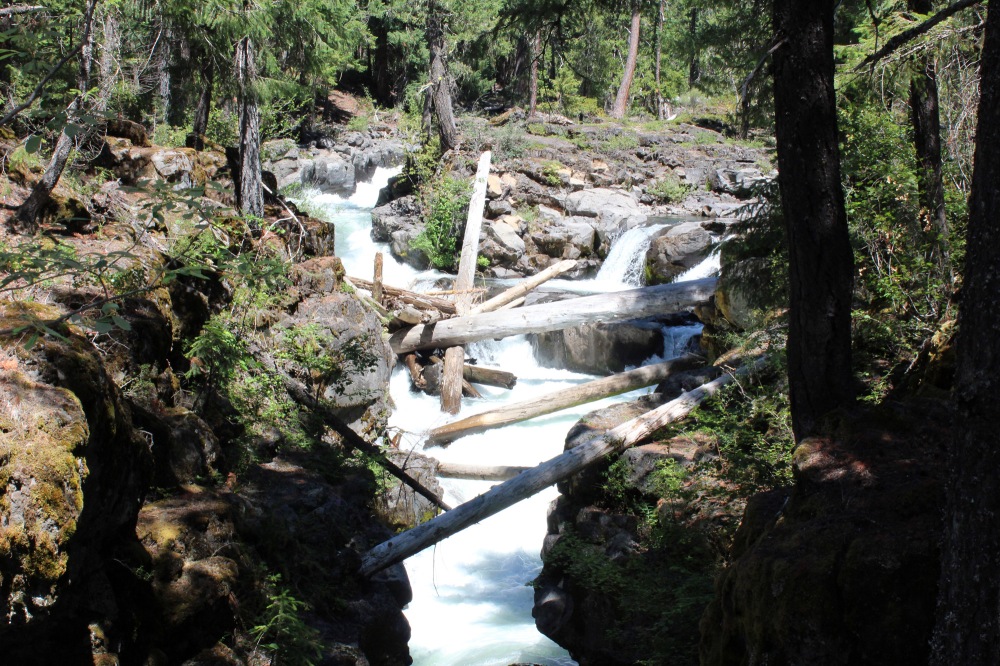 This rock was fantastic. Lee got some great video of it 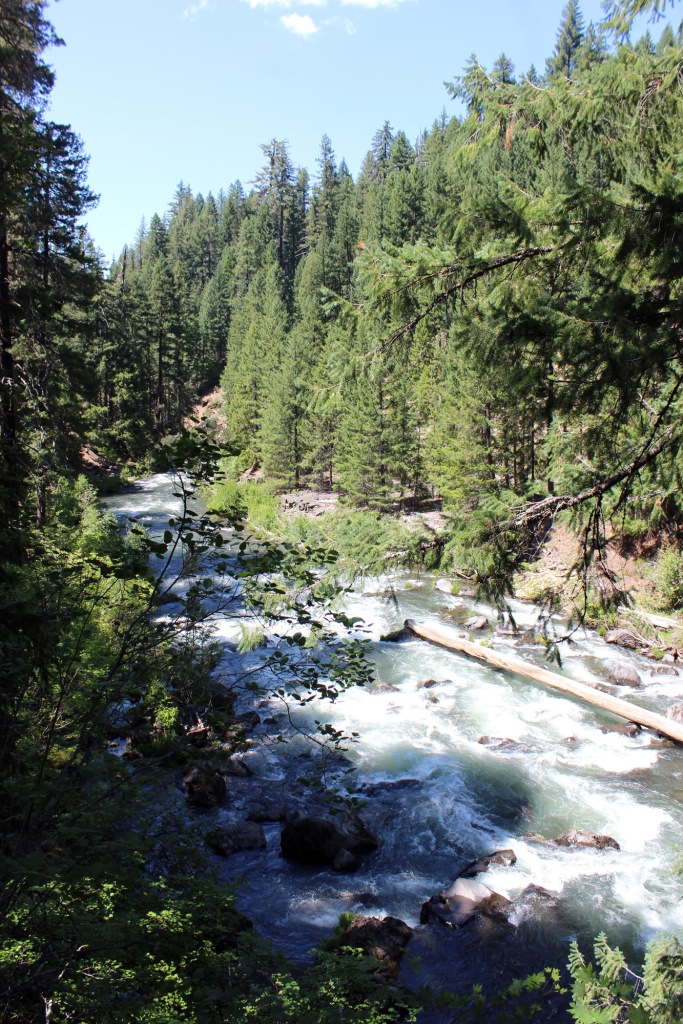 The end of the gorge with a humongous tree 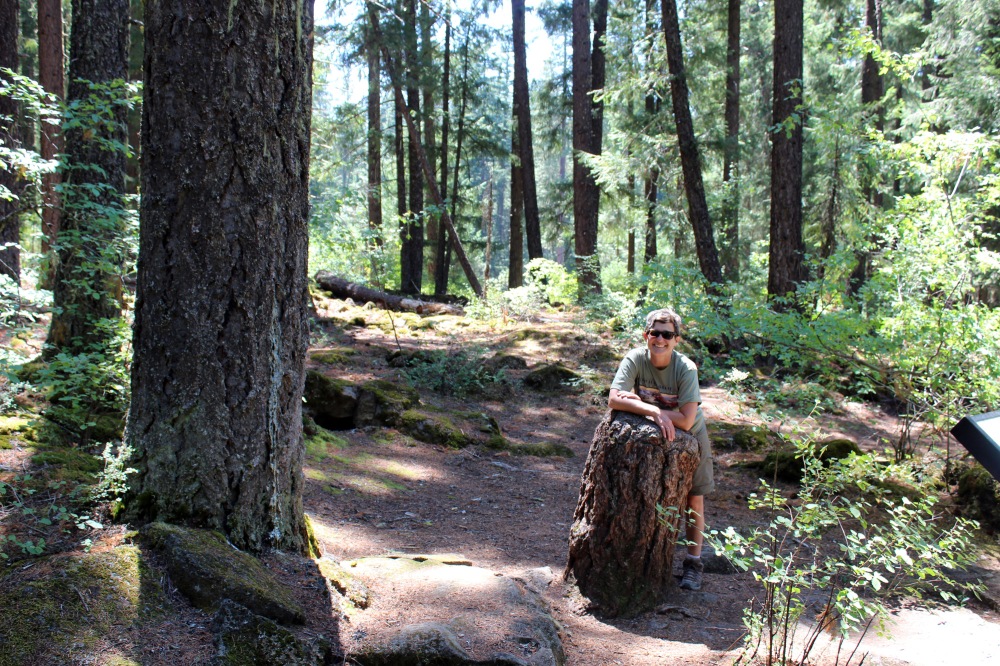 My absolute favorite part was this living stump

The sign explains how the roots are intertwined so the stump is still alive. It has bark on the top of it. Very, very cool

A little ways down the road was the land bridge 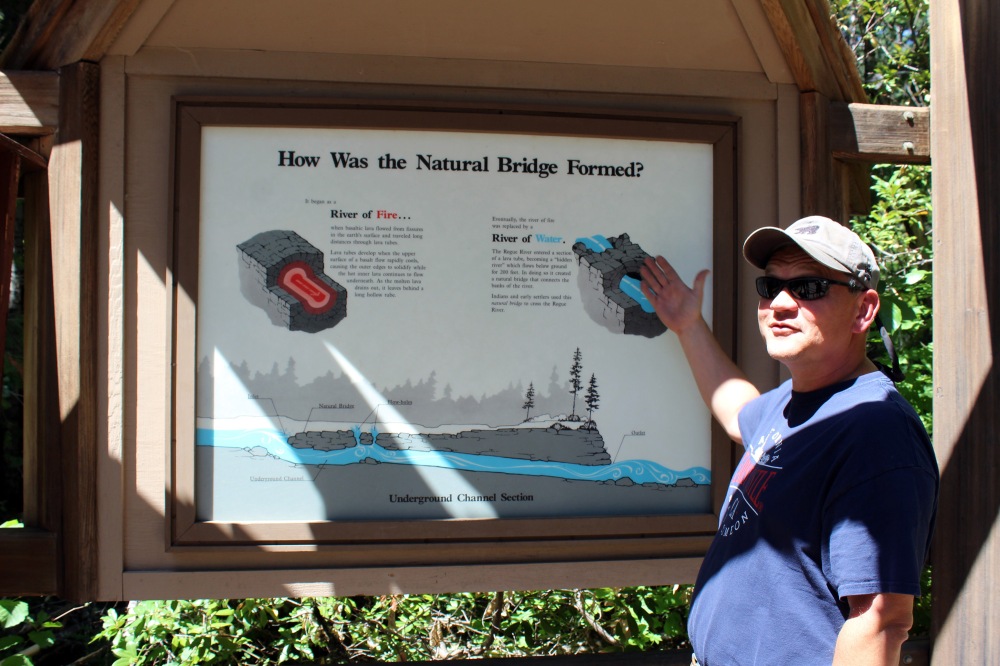 This lava cave was big and amazing 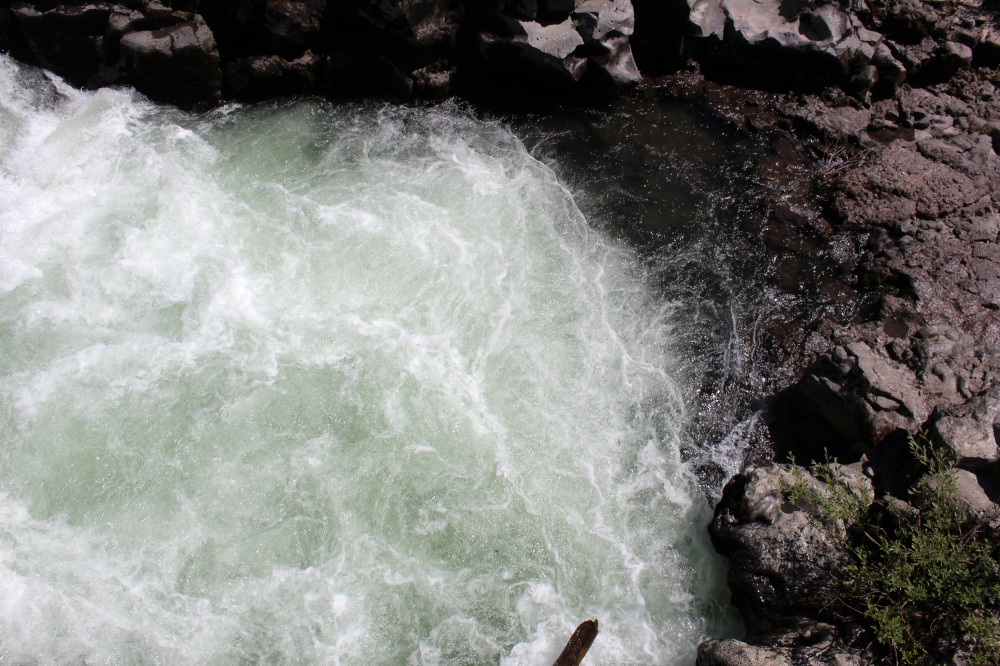 Where the water goes into the land bridge

The bridge although it was hard to capture in its entirety 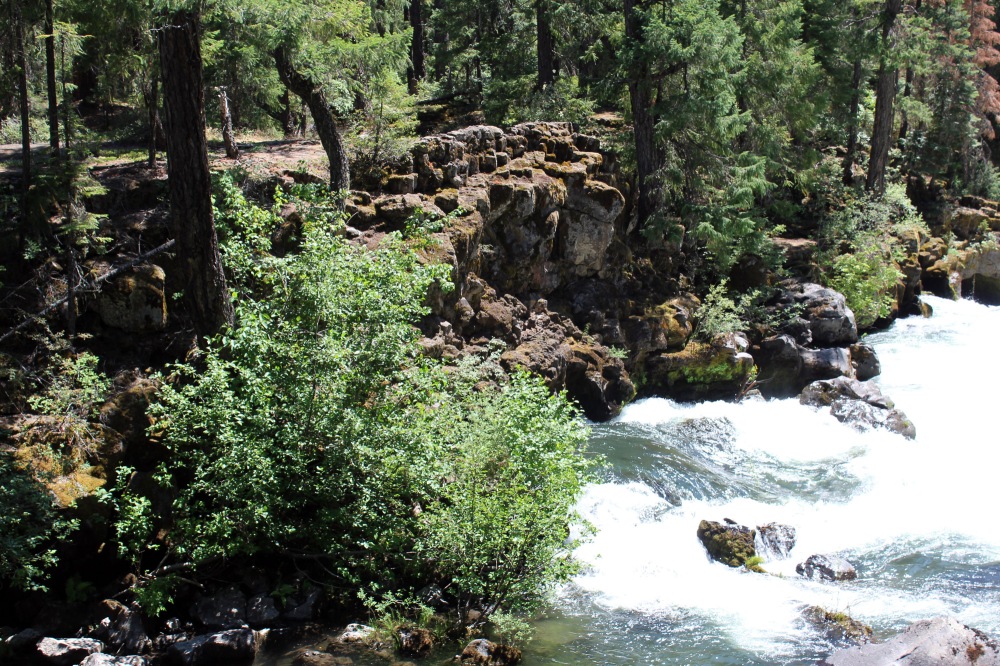 Where the water comes out on the land bridge.  Again the video does a much better job of capturing it

Finally we made it back and were all starving so we ate around 5:30pm.  Bert and Kat bought us some huge T-Bones and, no shock, Lee was very happy.  We had a wonderful time staying with them and are looking forward to the next time our paths cross. Although the drives there and back were super long and this is not something we could regularly do, combining amazing sites with great friends totally made it worth it.  Kat and Bert thank you very much for helping me put a big check mark on the bucket list!

The next morning we got up a little after sunrise (after a much better night of sleep, with the rain fly on the tent the heat stayed in better) and packed up and headed home. We intentionally chose a different route back which took us through Sisters, Oregon which is a pretty amazing area itself.

The three sisters. Much prettier than the picture I was able to get 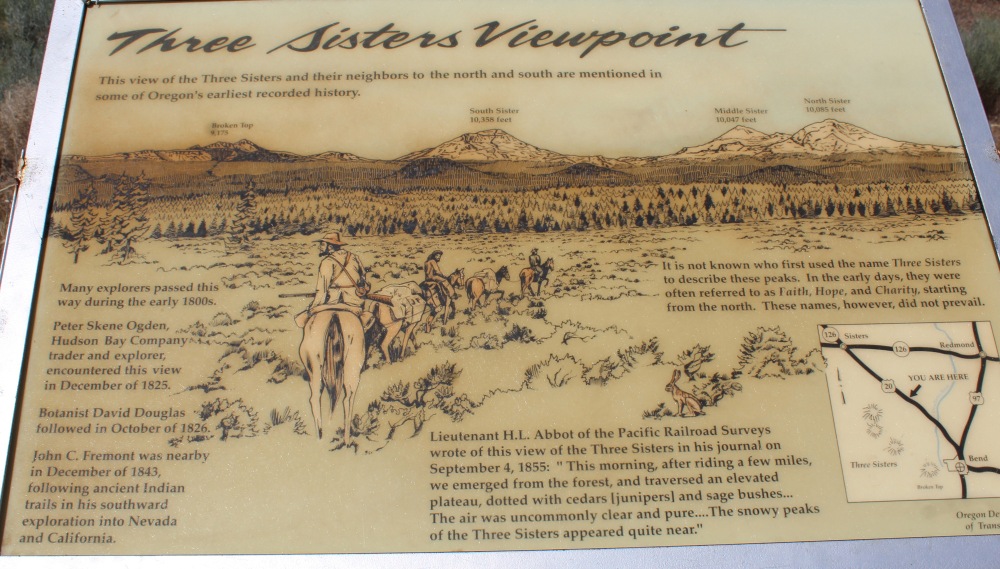 11 thoughts on “First Time at Crater Lake and Rogue River”