Conventional wisdom recommends that anyone who is becoming a full time RVer invest in three things; good hiking shoes, bikes, and kayak(s).  With visions of all of those activities in our heads we started our full timing journey with two of the three.  Oddly, the one item I skipped (decent hiking shoes), I came to regret when I sprained an ankle during a hike and hobbled around for three weeks.  Now my Merrill Hiking shoes

get tons of use and I will absolutely replace them with a like pair when they eventually wear out.  On the other end of the spectrum we went to quite a bit of trouble to bring our bikes.  Lee had a custom bike rack built and we carried them everywhere with us the first two years.  Unfortunately we never found a good way to cover them, so every time we wanted to use them we had a rusted chain, flat tire, or some other bike issue and despite our best intentions they saw little use.  Finally, we gave them away last summer in Alaska, and only rarely do I wish we had them.  The main problem for me is that I like to take pictures, and I am not coordinated enough to ride a bike and stop frequently with a big camera around my neck. It just wasn’t fun for me.

Finally, we purchased a Sea Eagle Kayak. Lee liked that it was inflatable (thus easier to store) and I liked that it was a two person kayak.  I had this vision in my head of riding in style (and barely paddling) as Lee moved us down beautiful rivers, but again, the reality did not live up to my fantasy.  First and foremost, when we went to one vehicle finding a transport company to give us rides, was much more difficult than we thought it would be.  Also, Lee made it pretty clear he wasn’t interested in doing all of the work.  Setting up an inflatable takes some time in and of itself and with our work schedules neither one of us was super interested in the tons of manual labor paddling upriver entails.  Don’t get me wrong, we love floating downstream, but the upstream was just too much work.  We tried some lakes to avoid needing to go upstream, but neither one of us was getting the experience we wanted.

Let me just take a minute here and say LOTS of our friends kayak, bike, and hike on a regular basis.  We definitely fall outside of the “normal” curve on this one, but we are also working physically demanding jobs on a regular basis.  Even if we weren’t though I am not sure we wouldn’t have the same issues.  I think my main point is we didn’t completely change who we are overnight simply because we became full timers.  As big a fan as I am of buying everything you need upfront, you might want to hold off on these items until you get some experience with the lifestyle.  Except the hiking boots.  Definitely buy those, because even if you aren’t planning on tons of hiking, odds are you will experience lots of places with uneven ground.

All of this really came to a head this summer, because we are living on a beautiful river.  We both wanted to get out and kayak, but the idea of paddling against the current (especially after our long, hard days of hauling trash and scrubbing bathrooms) was not appealing.  So it was get rid of the boat (which was super pricey at $850) or find another solution.  Lee really wanted to try a trolling motor, and although I had some major concerns about throwing good money after bad I agreed that it was worth a shot.  Lee did the research, found the motor, and figured out the mounting and finally we took it for a maiden voyage.

All the boat stuff including new motor and battery case

Lee put on the mount

Strapped on the battery

And added the motor

We launched from the Promontory Marina next to the campground and since we had no idea how long the battery would last we headed upriver.  I’ll just jump to the end here and say it was a huge success.  Lee loved having the trolling motor and we had enough battery power to go upriver and get most of the way back.  I was able to take lots of pictures and we only paddled when we got into shallow areas or if I wanted to add a little speed.  The view from the river was also really cool, and as familiar as I am with the river at this point, being in it gives you a totally different perspective. 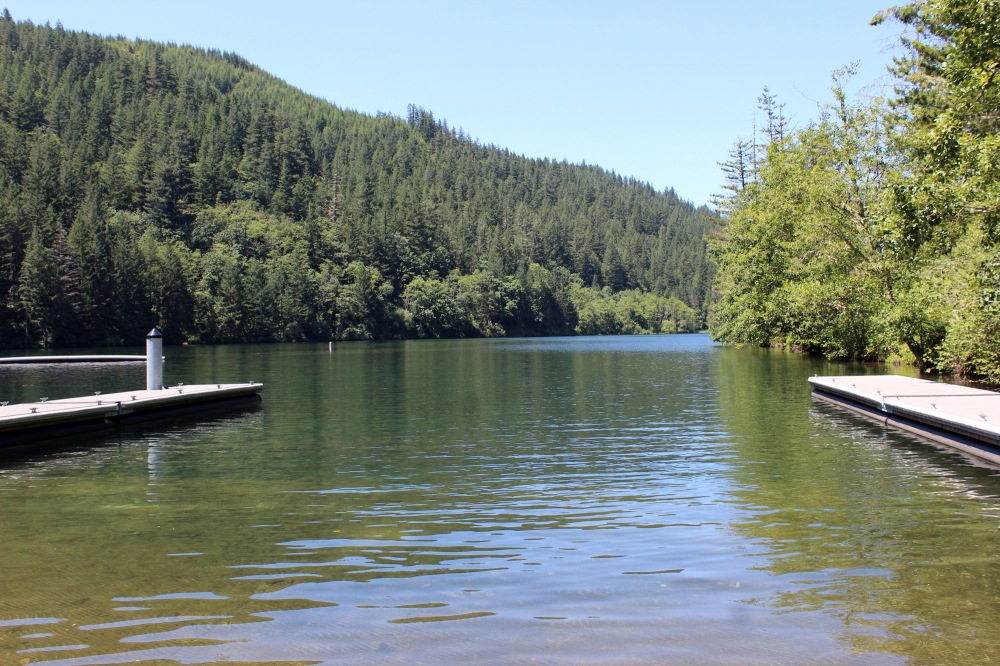 The view from the marina

I loved these trees, not sure what they are but very pretty

It was fun seeing the campsites from the river

The Day Use Area 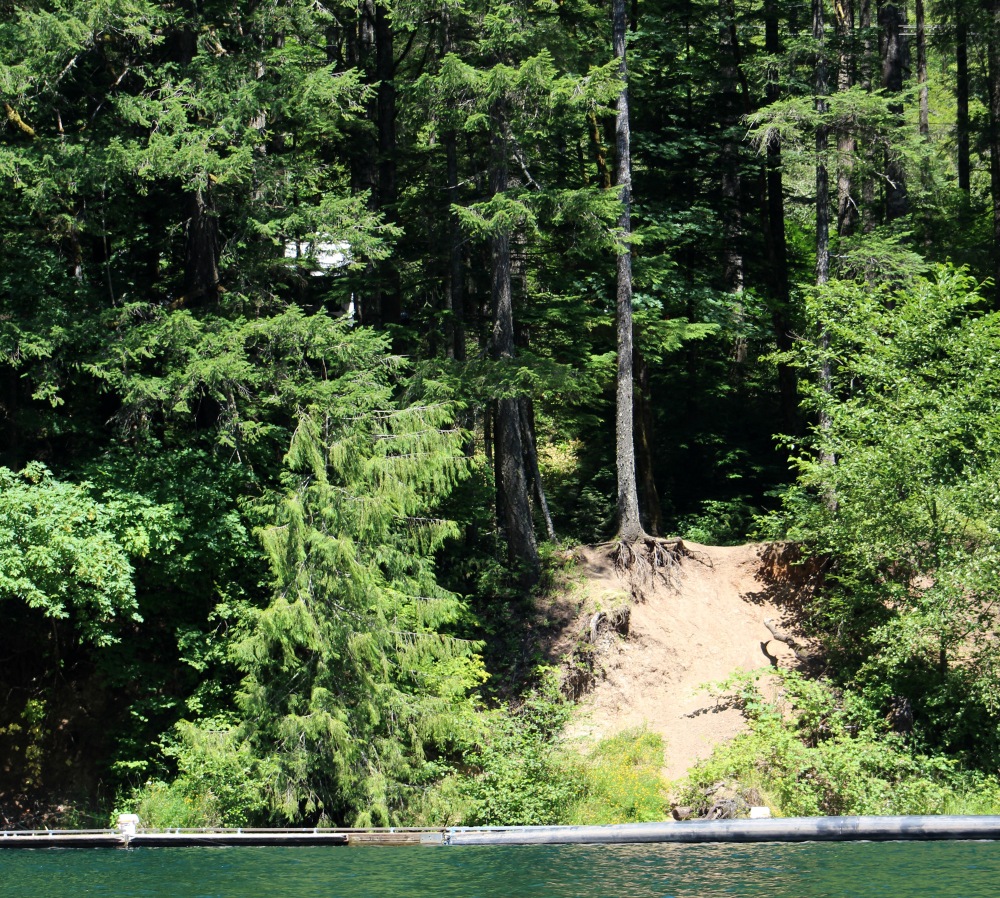 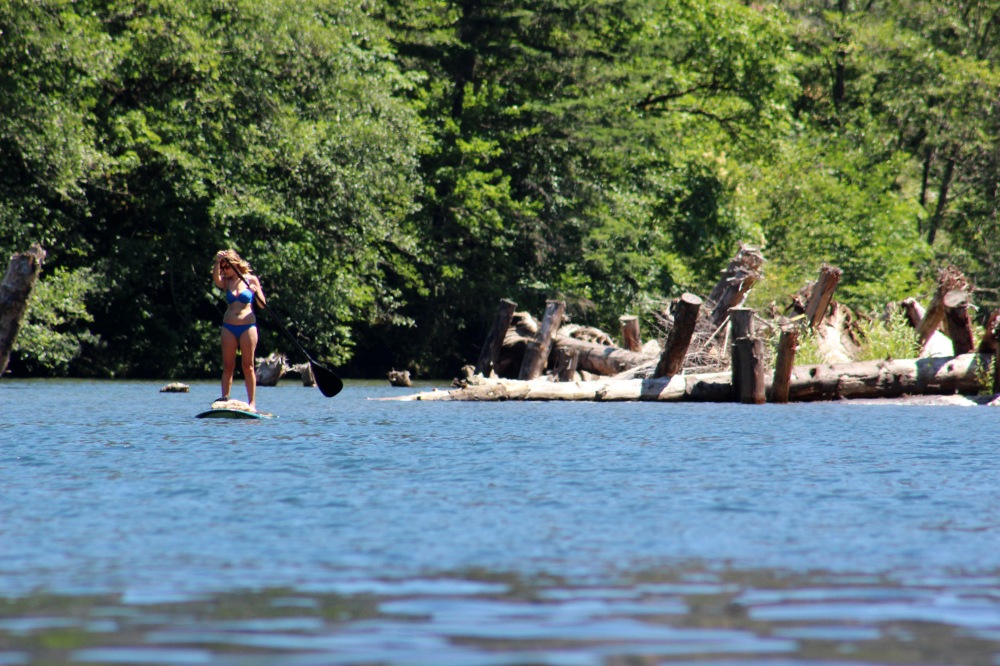 Several people were in the area either fishing or paddle boarding 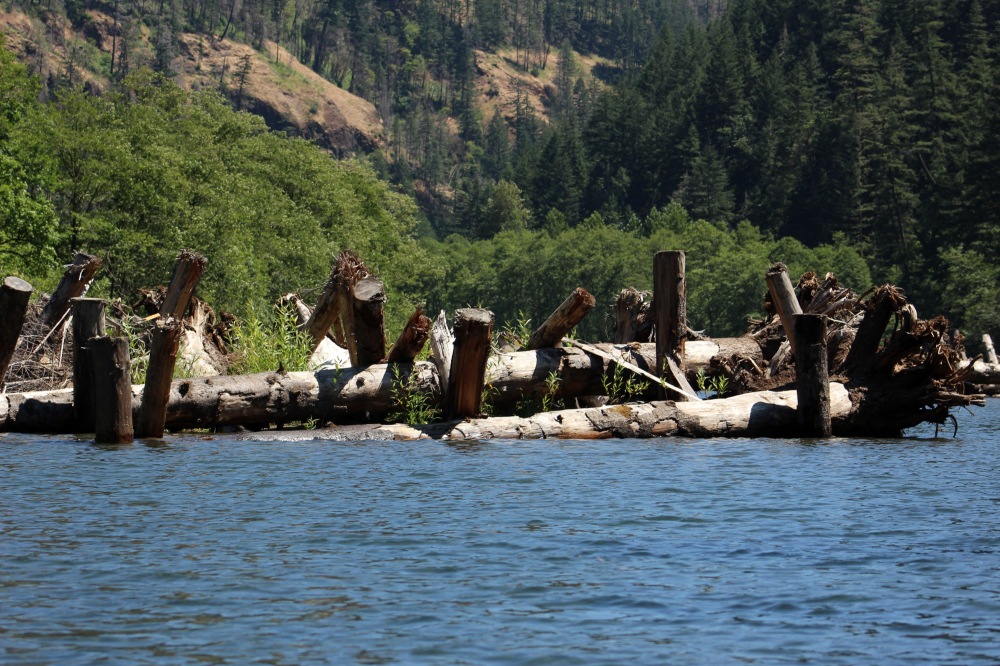 I loved these structures

They were really fun to kayak in and out of 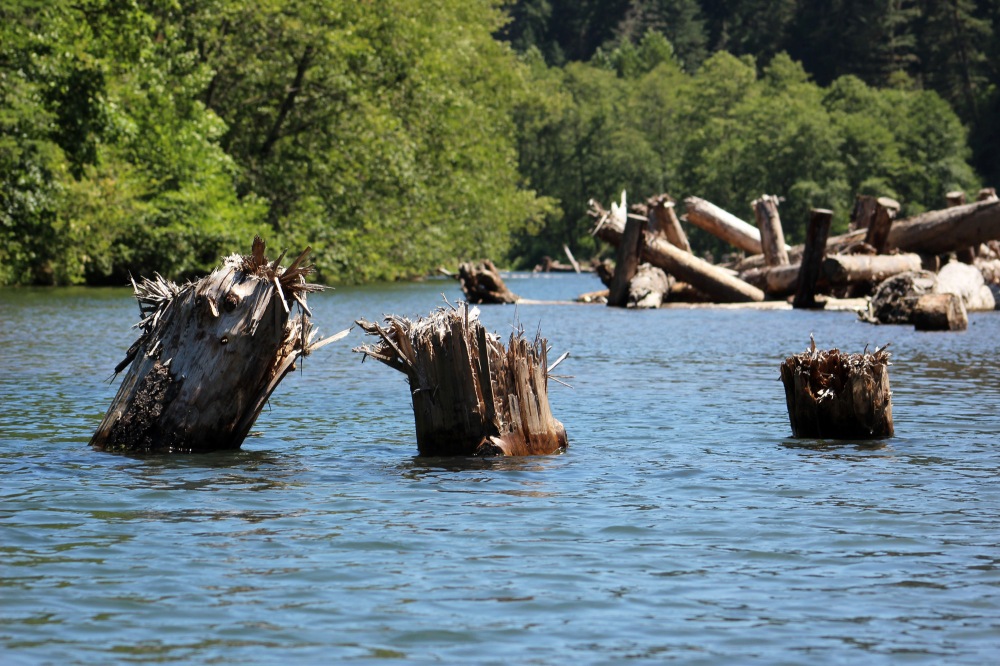 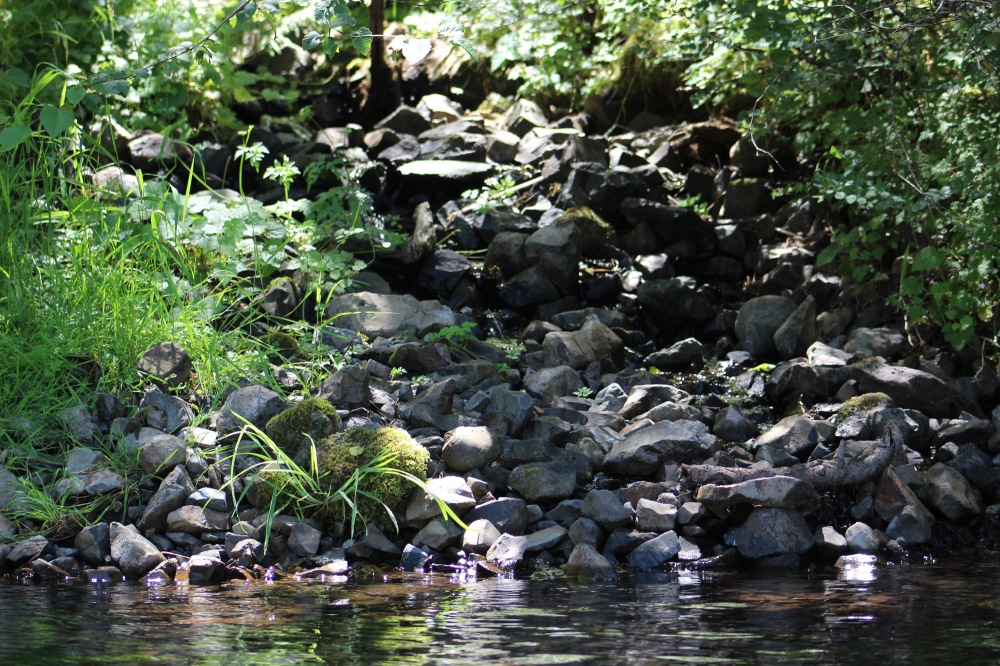 And saw this area on an island where people sometimes camp

It was fun and Lee had a really good time with the trolling motor, so hopefully we will be doing more kayaking in the future.  Time will only tell, but my personal favorite is still the scenic drive for seeing an area.  This was nice because you get into nature and see things with more detail, but we only covered a couple of miles of terrain while doing it.  It really comes down to personal preference I suppose.

After kayaking we started our weekend and mostly it was a really good one.  I made $27.70 recycling, which was great, and despite the heat and larger crowds we managed to keep up OK. One of the most exciting things was they finally cleared the slide on the road between Lower Launch and Faraday and we are now able to drive straight through.  Not only does it make our lives easier, it is also beautiful and on Thursday I stopped and took a few pictures.  Right before getting on the road I stopped and checked on my ospreys and discovered three large sized chicks in the nest.  They were on the outer edges of my range but I got a couple of decent shots!

Can’t wait until these guys start flying.  If you look close you see three heads 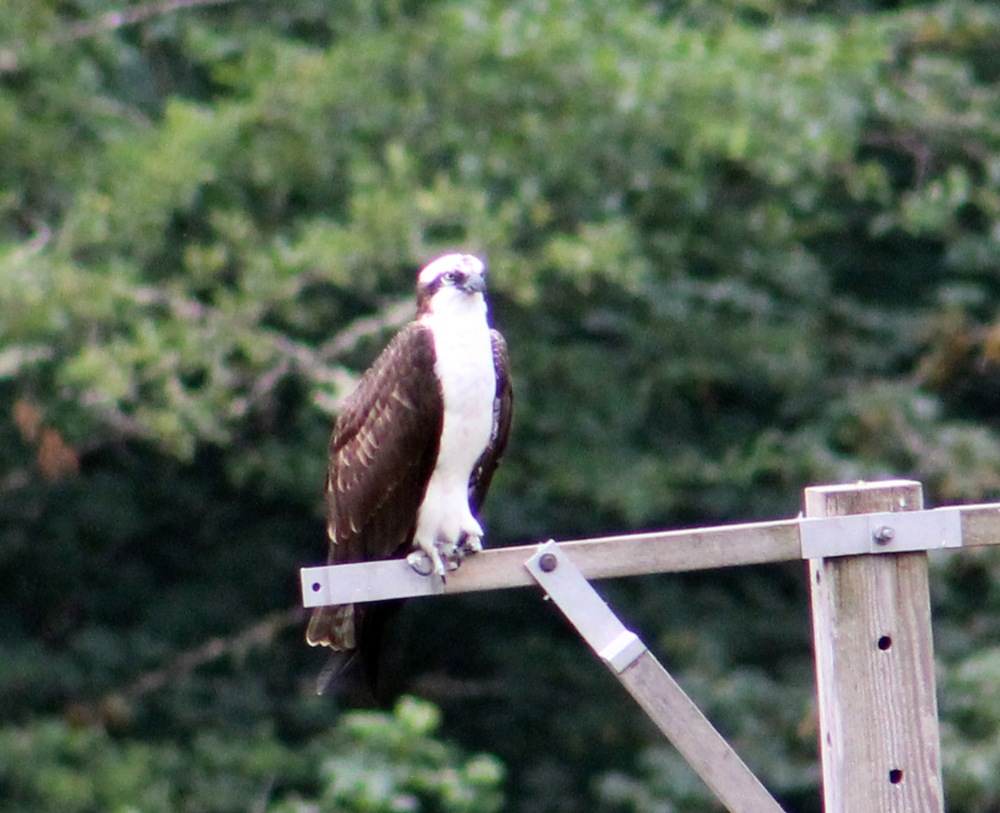 The parent was keeping an eye out 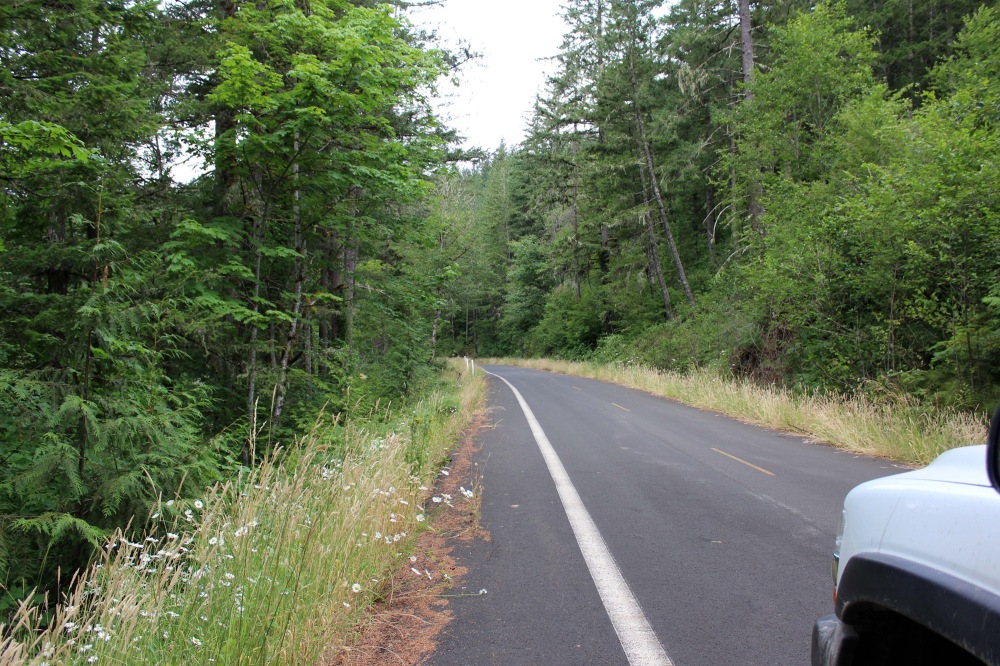 The road to Faraday 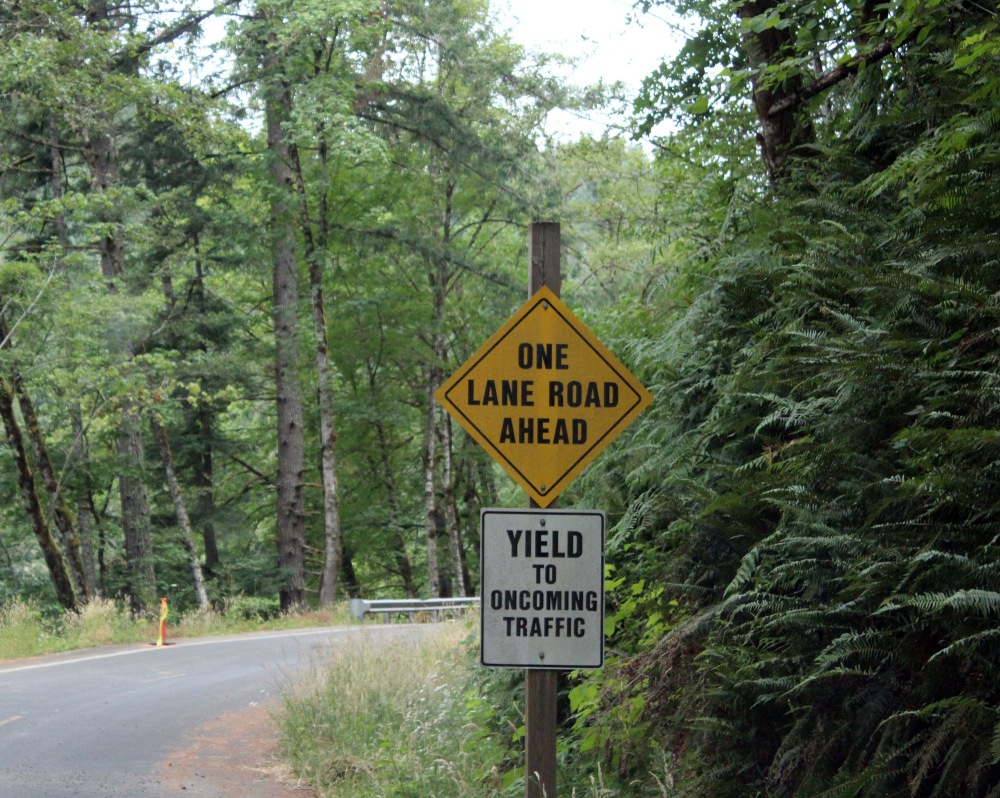 Good signage around where the slide was

They only have half of the road open

What’s left after the slide. The rocks with metal netting are used to stop any further slides 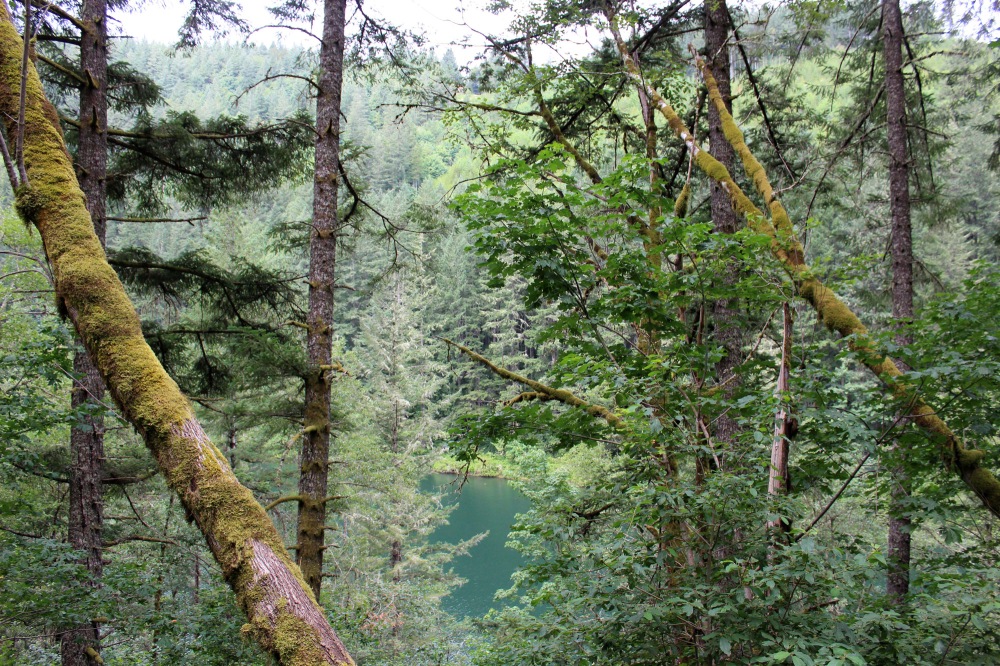 Some beautiful views of the Clackamas 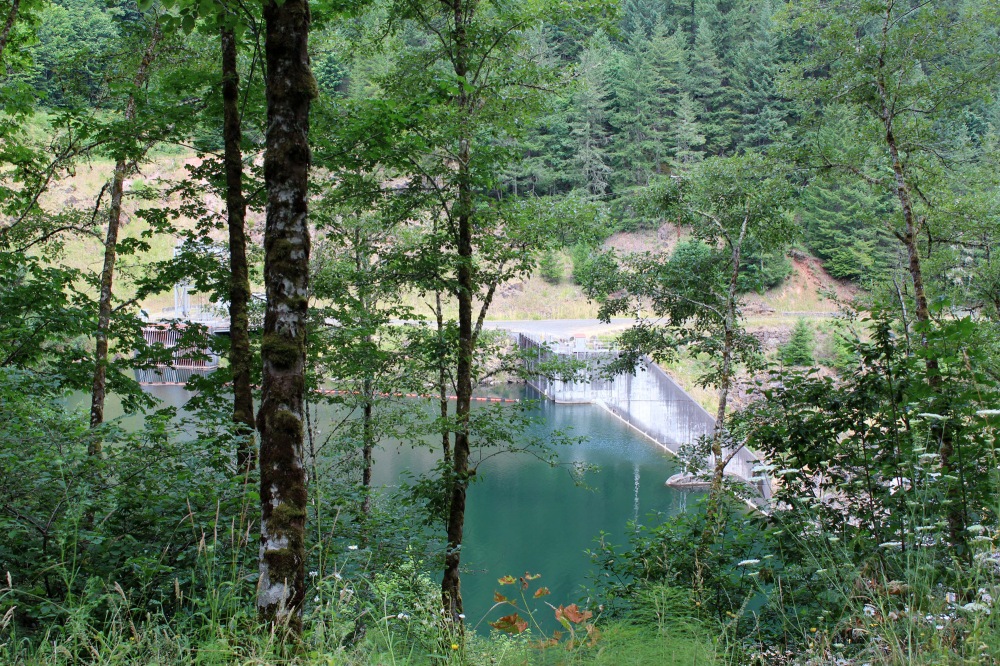 Ending at the dam

We even felt good enough to have lunch with fellow Dreamers Julie and Casey who we had met briefly at the 2016 rally.  They are full-time and living in Portland where Casey is working and they were willing to come down during our long break on the weekend.  Julie even brought lunch (which included pie!) and we had a great time getting to know them better.  Casey is a scrum master, which is somewhat similar to what I do and I picked his brain about working while living on the road.  They asked us questions about Alaska and other areas they hadn’t experienced yet and it was a great exchange of information.  Plus they are really nice people and we just enjoyed the company.

Julie, Casey, and Lee who is excited about his pie!

So the week was really good with only one sour note.  I thought about leaving it out, but I need to include it because it was kind of a big deal at the time.  On Sunday, we ran out of toilet paper at the Lower Launch and someone wrote “Poop” with a giant “X” in excrement on the wall.  I scrubbed it off, but it really was a bummer way to end the week, because seriously who does something like that?  It obviously happens though, and for those of us who clean bathrooms, it is not pleasant at all.  It isn’t just dealing with the fluids, it’s how intentional the act is.  Craziness. And don’t get me wrong, Lee and I both know these sorts of things are going to happen, but we also shake our head and think who does something like that?

Well, next up is our Crater Lake trip, and we are both very excited about that, and since we won’t be cleaning any bathrooms there I am sure it will be amazing 🙂

11 thoughts on “First Time Kayaking on the Clackamas River”