Well, unfortunately we did not get the break we were hoping for.  It started out great, as I didn’t have any trucks past 9:30pm last night, and was even able to fall asleep on the couch at 1:30am, which was nice because I needed some extra sleep.  Unfortunately, the next day for Lee was not so good.  It certainly wasn’t at the levels of the rig move, but he had plenty of trucks, and almost all big ones.  Several tankers of them were going back and forth between us and the new location down the road and when I finally asked why was told they were moving drilling fluid from the tanks at this site to the new location down the road.  OK then.  And again, I know you probably get tired of me saying this, it isn’t so much about the volume but being mentally prepared.  No one mentioned that step to us, and Lee really could have used a light day.  And the heat didn’t help.  It was full sun, 91° today, and it felt much more hot than that.

I had a nice conversation with my mom today and explained it like you knew guests were coming over to your house, but weren’t quite sure when they were coming.  So there is a level of mental alertness required that makes you tired after awhile.  At least that’s been how we feel, but then again we are never off.  So for us I think the 24/7 nature of this gig continues to be the biggest problem. It’s not so much never having a day off, we have done that before, but not ever having time off, unless you are asleep, is just tough. And the effect is cumulative.  People do this year round and that must take quite the mental adjustment.  Others will only work a 12 hour shift, but we haven’t been seeing many of those.  And I know I keep saying the same things over and over, but honestly these feelings keep catching me by surprise.

And I know what that is about…it’s not knowing what’s going to happen from day to day.  It doesn’t really help asking people either, because almost everyone really understands their little piece of the process and not anything else.  There are separate people and companies who specializes in the different stages and even the company man is mostly conversant with just the drilling process.   It really is not so bad once we make the mental adjustment, but we keep having these blips where things are not so great and every time it is because we are surprised.  I suppose we could just assume the worst every single day, but I think we would have a hard time getting through the assignment if that was the case.

Thankfully, the traffic died down after 7:30pm and I at least had some quite time.  I totally left Lee alone between 4pm and 8pm and spent the time mainly outside so he could have some down time as well.

Today has been much slower with most of the traffic being people who are lost and are going to the wrong gate.  Their instructions say the rig was moved to “farther down the road” but they thing they need to enter our gate and travel farther into the ranch, not go down the county road to the next ranch.  Understandable mistake, but requires walking out and asking the question almost every time.  A few folks are coming here.  Right now they are finishing a fracking pond which is essentially an 800′ x 600′ hole, 20′ deep, with a liner in it.  This pond will provide water for the fracking process.  Temperatures unexpectedly reached their highest for us today at 99 degrees. Lee was wearing a coat in the morning but by 2:00pm it was hot.    It is a dry heat though (9% humidity) so if you stayed out of the sun it’s not too bad, but just a few minutes out in it is hot!!  I spent the time working on taxes and Lee kept chugging through the videos.  He started a few weeks ago where he left off several years ago, which was 1996, and he’s currently working on 2004, so that’s awesome.  And last night I got 20 more recipes formatted so I am halfway done!

Plus before I woke up Lee finally got some pictures of our resident roadrunner.  He hangs out back behind the generator and takes off as soon as he sees us, so Lee had been trying to get some shots for days.  He finally cooperated though and they are really great. 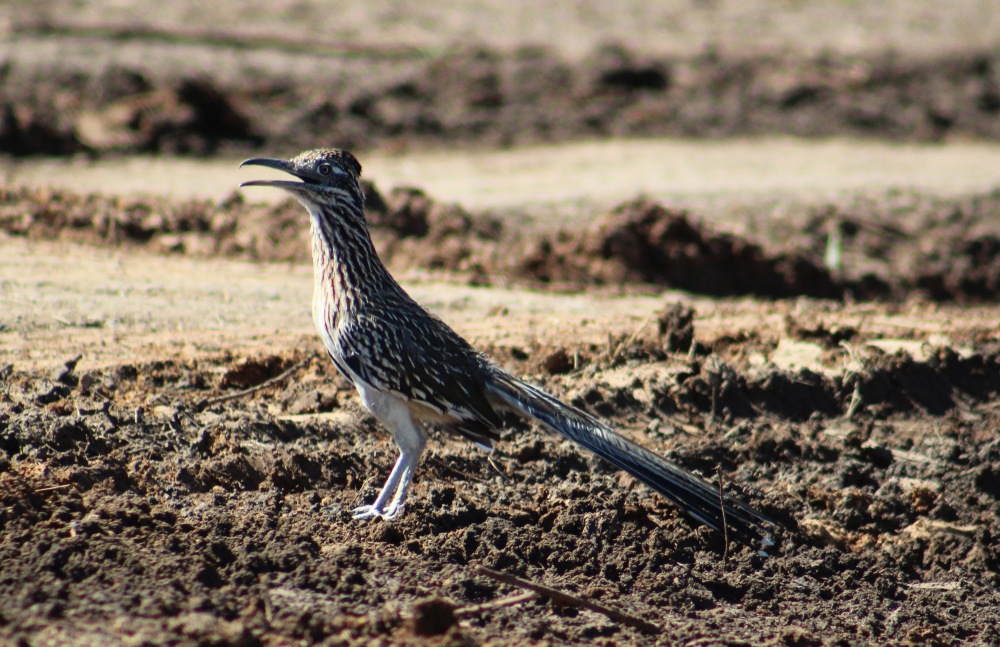 Lee thinks they look like velociraptors when they run

Playing hide and seek with Lee

Standing at attention with one leg up

The back view with crest feathers up 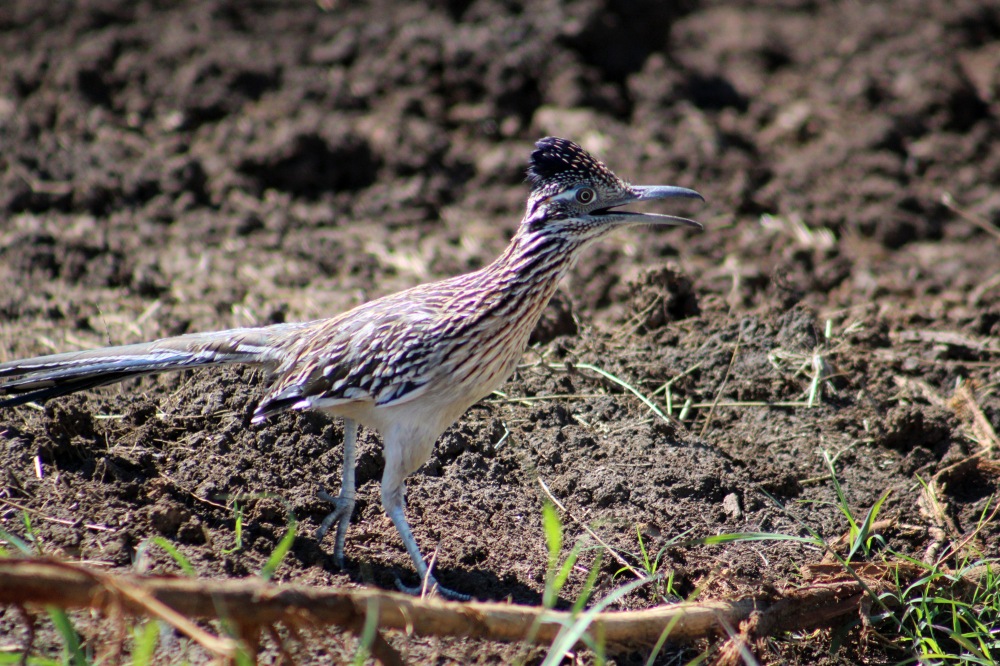 And my absolute favorite!!

Another pretty slow day.  Lee had a group of three gravel trucks that came through throughout the day. The same three trucks would come in in a convoy, stay about 20 minutes, and then leave for about an hour. The nice thing about the convoy is that he nly had to open and close the gate the once each time. This gravel is part of the cleanup process and is used to “pretty up” the area around the drill. It’s also used to fill what they call “mouse holes”, which are the vertical holes they drill to connect the horizontal pipes that are below ground. By the time I took over at 12:30pm I was told it was the last truck, which was great because although it wasn’t nearly as hot as yesterday, the wind was back.  And the wind had lots of grit in it, which is my least favorite.  Up until this point the windy was usually dusty and powdery, but today it had little chunks of rocks which were hitting my legs. (If you’ve ever been on a beach in really heavy wind, that’s what it feels like. – Lee)

Lee went to the library and to Walmart and I worked on taxes.  I spent some time yesterday getting the papers organized and printed, but today was all about filling out the workbook.  I use a company called Travel Tax which specializes in mobile workers.  Because they do quite a bit of work for traveling nurses they are familiar with the tax codes in every state.  They are also familiar with small business deductions and since they are a small  company they are reasonably priced and very nice. The way it works is you go to their website, download their extensive workbook, fill it in and email it to them.  Then they set up an appointment with you and it takes about an hour to review over the phone.  I had a free consultation in 2014, used them in 2015, and I am using them again this year.  I’ve been very happy with the results, although because they are a small company, communication back and forth can take a little while.

The big thing I did yesterday was categorize all of our expenses.  We have our video business, RV repair business, consulting business, and I just added Camper Chronicles.  All four of those are under the parent company of Open Road.  I could file a separate Schedule C for each one, but since the dollar amounts are so low I group it under one for tax purposes, but I do have it broken out on my Income and Expense Statement.  We use Quicken so it’s pretty easy at the end of the year to run a statement as long as all of the items are categorized correctly.  My goal (aside from making money) is to show progression with the company overall.  I never want to be in a position where the IRS calls my business a “hobby” and fights the deductions.  So I was pleased that this year we had $13,212 in income and $4972 in expenses for a profit of $8,240. We made more than that, of course.  Both Alaska and the Beet Harvest were jobs where taxes were taken out and I had three months of severance from my corporate job that carried over into 2016.  But for this year it was enough to show growth.  2017 will again be a mix of 1099 jobs and W-2 jobs so we just need to make sure that enough of the work is 1099.  Since gate guarding falls into that category that’s a good way to start off the year, although our other two jobs; camp hosting and Amazon will both have taxes taken out.  We will have to see how much side work we pick up this year.

And let me be super clear here.  I am in no way a tax expert.  I am not even 100% sure I am headed in the right direction here, but it feels right, and to a certain extent I am relying on the tax advice of my accountant to help me stay out of trouble. In 2018, this will all change as I am absolutely planning on doing some consulting, but for right now we will just have to see how it all plays out. Overall the day was going well.  I got the workbook done and then I saw a truck pulled across from our RV.  Since it wasn’t facing the gate but someone got out I put my head out the window and said “Can I help you?”  The guy, whose back was to me, then peed on the ground.  He was facing away from me, but wow, was I mad.  He then got into his truck and left. I desperately wanted to ask him his address with the thought I could return the favor and go pee in front of his house, but cooler heads prevailed and I went back inside.  Lee was still gone and obviously the guy was rude.  Craziness, especially since because there is plenty of place along this road to pull off AND there is a port-a-John right down the road at the entrance to the neighbor ranch where he was headed.  Lee didn’t think it was that big of a deal when he got home because he was facing away from me.  Men!