For a variety of reasons, we all decided to skip Carlsbad and stay here at City of Rocks until the 14th.  This required that we all move to a first come/first serve site, so late on Monday we toured the campground to see what had opened up.  Finding two spots that were large enough for us and near each other was tough, but luckily we found two that did the trick, all the way in the back away from other campsites, which was a nice bonus .  Plus I was hoping it would be less windy down among the lower level. Deb had warned me that it was much colder in New Mexico in March and that has absolutely been the case.  Nights have gotten down to the high 30’s and the days are in the upper 60’s but many have been overcast making solar generation less than optimal.  But the campsites are the most interesting any of us have ever stayed at and we are making the internet work.  As I mentioned before there is no ATT at all and Verizon is 3G without the booster.  Unfortunately the booster is a bit of a power hog (costing 10 amps to run), so we can’t really leave it on all the time and since we are sharing it between two couples it’s been a bit of a challenge.  Thankfully I do have my Verizon phone so we can at least get phone calls and as much as I hate spending the $57 a month it is times like these I am glad I have both carriers.

All of that would be fine though if it wasn’t for the wind.  Unlike Quartzsite this wind has gritty stuff in it and it has blown pretty much non stop since we got here. It makes sense really, since the park sits in the middle of a huge flat plain and the rocks themselves can act as a wind tunnel of sorts depending on which way it is blowing. On Tuesday we all moved down into the sites we had selected by 8:30 am (to ensure no one else took them) and then I tried to walk around and take some pictures of the rocks.  The pictures were amazing, but it was just too windy for me, which ultimately drove me back into the rig. So extremely beautiful and unusual, but weather really can be a huge factor in how much you can enjoy an area. 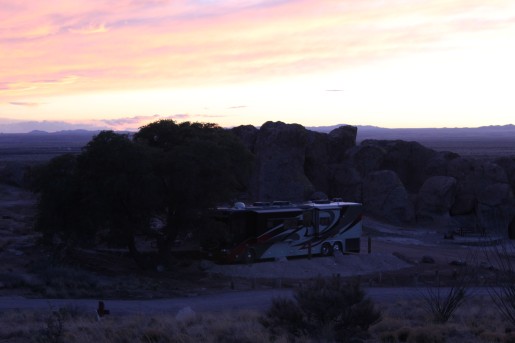 Greg and Cori’s next spot.  He did a fantastic job squeezing in there

Here’s us right next door

The rocks right behind us lit up by the sunset 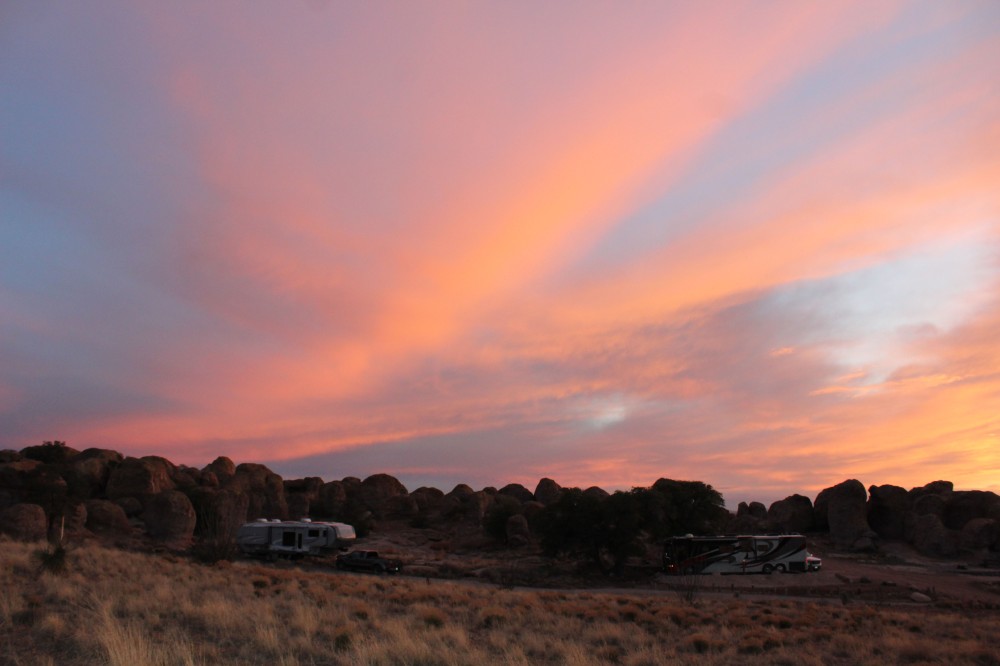 On Wednesday, another windy day, we all drove the two hours to White Sands Monument.  White Sands was on everyone’s list and even though the drive was on the longish side, we all wanted to see it.  Initially I had pretty low expectations, but have to admit I was very impressed.  The white sand is made by gypsum rocks being broken down by the elements and the dunes it creates looks an awful lot like sand dunes on a beach.  You keep expecting to see an ocean over each next rise and many parents bring their kids there to sled down the sand.   It is a National Monument so it was free with our America the Beautiful Pass, but only $5 to get in if you don’t have one.  So it’s a big family destination and there were lots of families enjoying the day there.  The easily accessed part of the park is pretty small, but well worth the stop if you are in the area, and we all really enjoyed the picnic area.  Plus we found a quiet spot away from everyone and Lee got some stunning drone footage, which I hope you will enjoy. 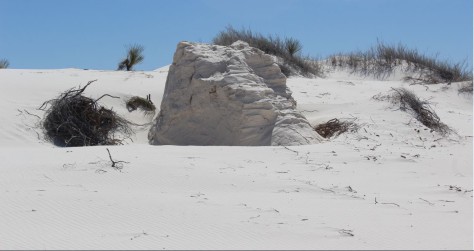 The big version of the rocks, this one was about the size of a small car. 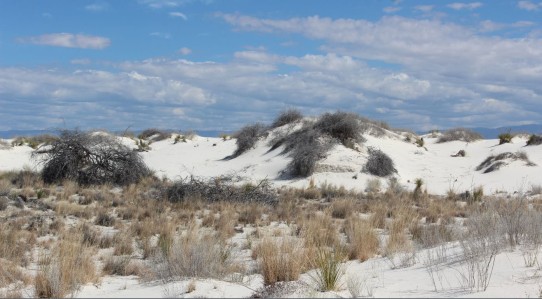 Whole families were there

Hobi was a bit tentative about the boardwalk

So Greg ended up carrying him 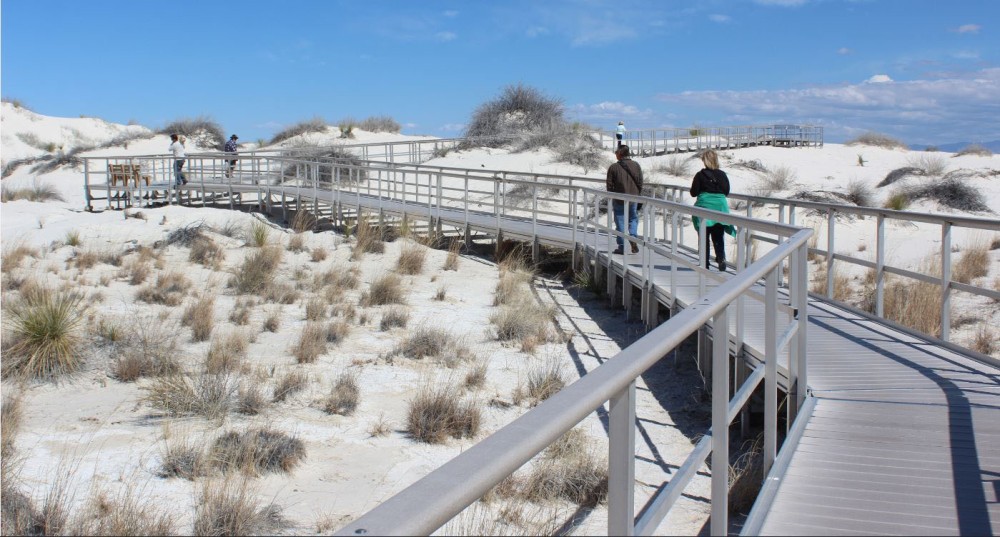 He seemed happier at the end of the boardwalk. Probably was confused like me on where the ocean was 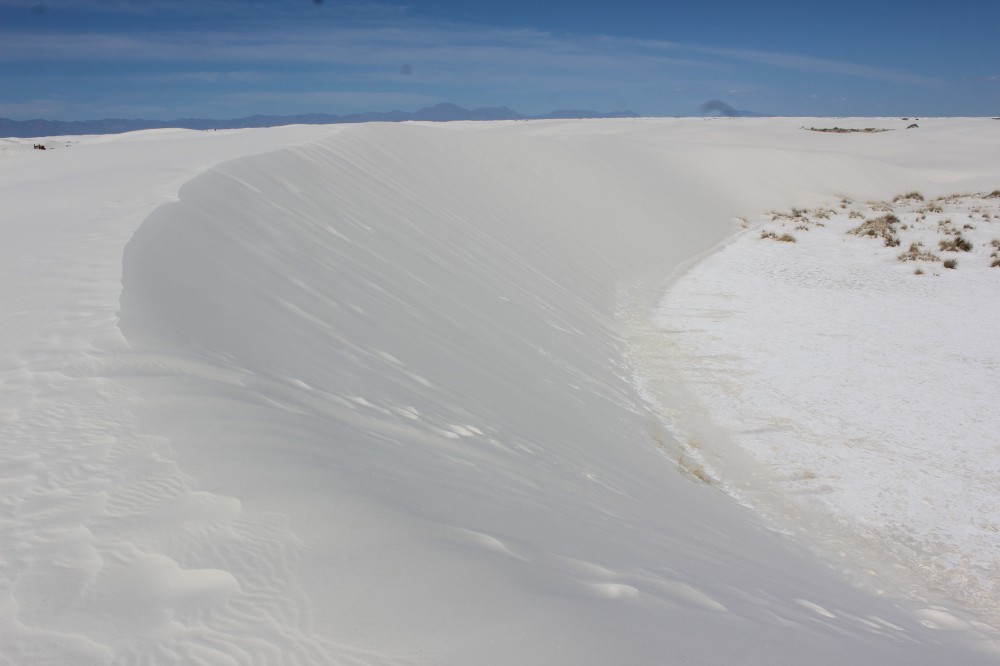 I walked up a big dune and got this shot. The cliff was very steep

It was a fun couple of hours and high marks certainly for a novel activity, but we had driven a long way and still had plenty of daylight left.  We decided to drive to the White Sands Missile Range Museum, which Lee was very interested in.  Turns out the museum is on an active military base and in order to drive on you need a background check (which they did for free), driver’s licenses, car registration, and proof of insurance.  Once all that was done (which took awhile unless you are a retired government employee with ID in which case you can just walk on and vouch for a guest) we had to have our trucks searched.  He did a somewhat thorough job. making us get out and looking in all closed areas of the truck.  Finally we were in, expecting something spectacular I suppose and instead we got this dinky little museum.  The museum is a hodge-podge of all kinds of collectibles, with a pretty decent missile garden, but not sure for me or Cori it was worth all the fuss.  Lee and Greg really liked it though, so most of these pictures and the corresponding comments are from him because frankly I didn’t know what I was looking at half the time. It was free though so that was a good thing.

This Pershing missile I actually recognized because our friend Larry drove these around Germany in the 80’s when he was in the Army.

I recognized the Patriot missile of course

This V-2 Missile was the first of it’s kind used by Nazi Germany to bomb London. They were huge! 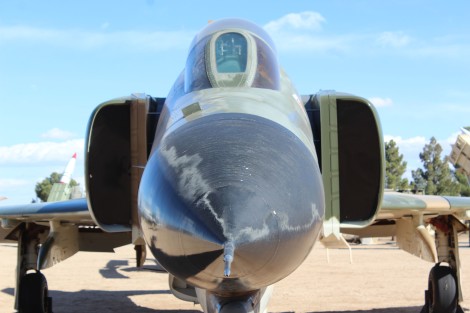 This is a drone helicopter used as a target.

This is the Fat Man bomb casing. Fat Man was the code name for the plutonium weapon dropped on Nagasaki August 9, 1945. It was the same design as the first nuclear detonation in the world, at the Trinity Site here at White Sands on July 16, 1945. After that first detonation, the only other available weapon was “Little Boy” which was a much less powerful uranium weapon, dropped on Hiroshima, August 6, 1945. Little Boy was a 16 kiloton bomb, compared to the 20 kiloton Fat Man. To give you a size of scale, that casing above is 10’8″ long, is 60″ in diameter, and weighed 10,000 lbs. And one final bit of trivia, the code names are both characters from “Casablanca”. -Lee 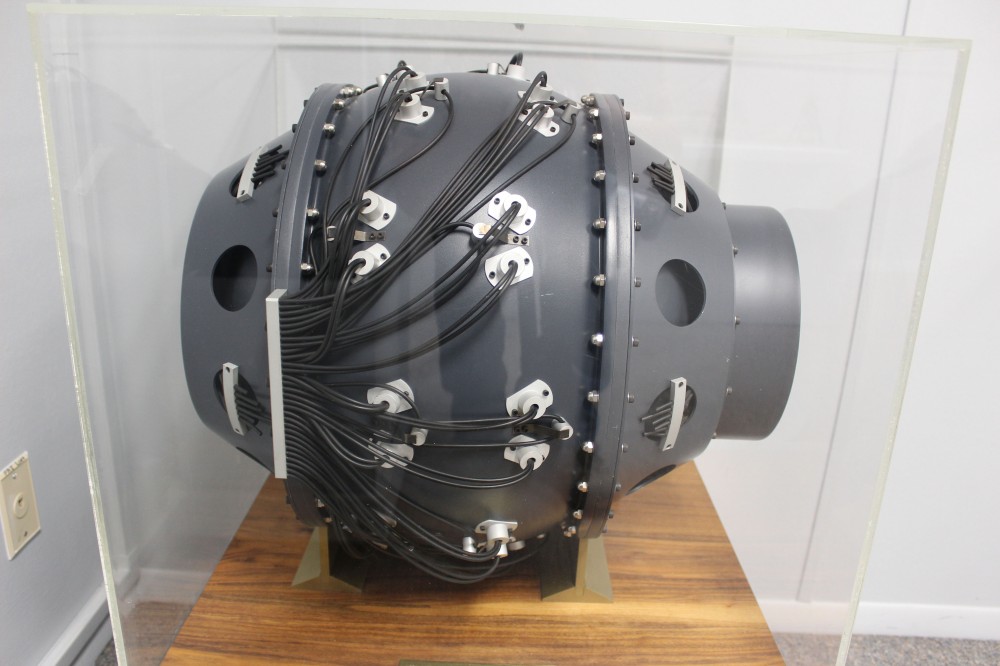 This is a scale model of the Trinity test bomb, which was known as “The Gadget” during development, construction, and testing.- Lee 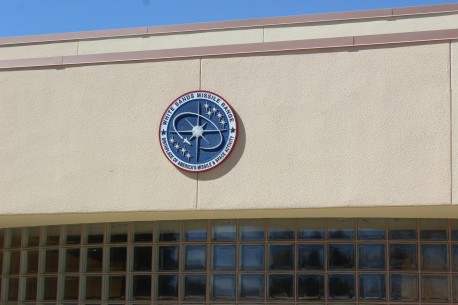 This is a cinetheodolite, a motion picture camera that has been in use at the missile range since the beginning. It films a rocket in flight, and at the same time it prints the time, elevation and azimuth of the lens on each frame. Since the precise location of the camera is known, the data can be used after a test from multiple cinetheodolites to compare actual position of the missile or rocket to the flight plan, and the data is accurate to within 2 feet, allowing for very detailed understanding of the performance of a flight. Originally it took two men to operate one of these, now one can do it via a joystick. – Lee 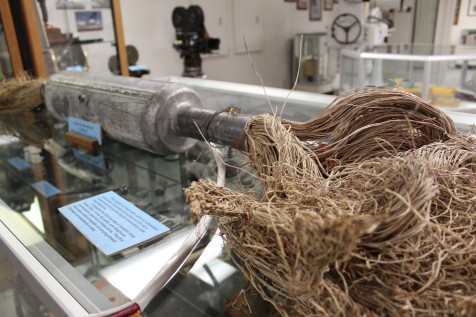 This is a piece of twisted pair cable along with a lead splice, the large grey tube in the background. Prior to fiber optics, a telephone call required two of the hundreds of wires shown here. A fiber optic cable, which is a strand of optically pure glass as thin as a human hair is capable of carrying nearly limitless conversations or data.- Lee 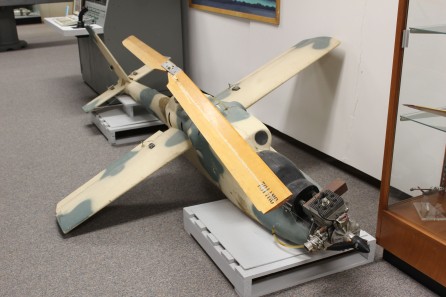 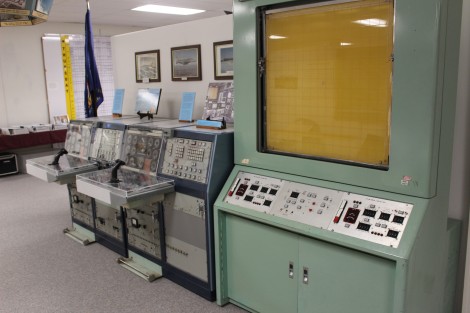 This is a control system for flying target drones. It has been in use since 1973, and the same model is still in use today. – Lee

This was what a drone controller looked liked. Now Lee uses a smart phone. Crazy leaps in technology

This is “program” card for a radar system used from the early 1960’s to the 1986. The unprogrammed board was a plate about the size of a standard piece of typing paper, and was full of tightly packed holes. Think of the board from the game “Battleship”.  Placing wires with pegs into the holes allowed programmers to create complex program instructions, as well as subroutines with the board, and between-board commands. There are nearly 800 holes on the board, and each connection had to be made by hand. The farther you got, the harder it got to identify the holes, because of all the wires. In addition, there were two additional boards for each board created; one for calibration, and one for testing.- Lee

This is trinitite; a substance created from the Trinity test explosion of the first nuclear weapon. It’s a green glassy substance that covered the depression in the ground made by the explosion. It was originally thought that the heat of the blast vaporized the steel tower the weapon was mounted to, and melted the desert sand, creating trinitite. In 2004, Los Alomos scientists took a closer look and determined that the sand was first scooped up into the fireball, and melted inside, then the tiny drops of melted sand behaved as water in a cloud-collecting into bigger drops that remained too heavy to be suspended and fell as a rain of molten glass. Radioactive molten glass. – Lee 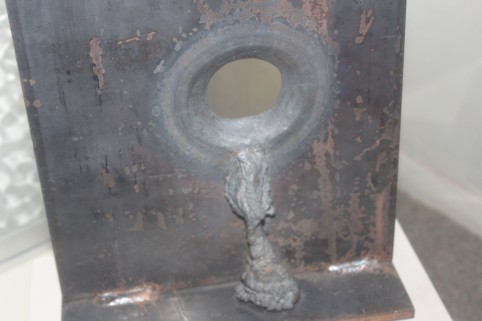 One of the nifty toys at the range is a solar furnace. Flat mirrors track the sun, and reflect the rays into concentrating mirrors which are curved and pre-focused to a small area, around 6 inches. This allows scientists to recreate the heat of a nuclear explosion, using the sun, to about 5,000 degrees Fahrenheit. This is a sample of half inch thick steel that was burned through using the device. – Lee

Loved that this water tub also included instructions on how to turn it into a toilet!!

And the sanitation kit cracked me up as well

Can you believe the rocket scientists used this to perform calculations 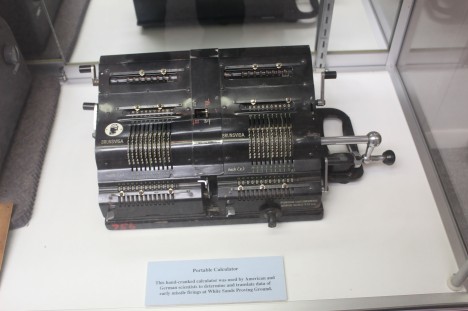 Then they eventually upgraded to this…crazy!! 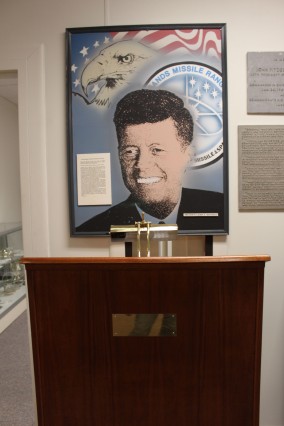 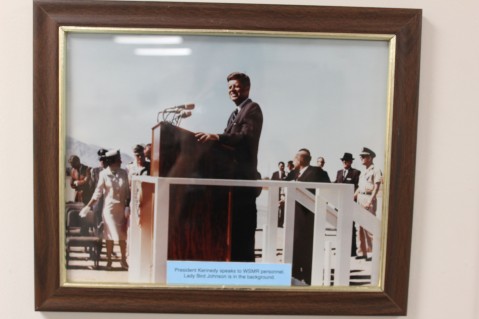 Using the picture as a reference I got to put my hand exactly where his was on the podium. That was cool

So mixed reviews on the museum.  The guys loved it the girls would have given it a pass since it took so long to gain admittance, but either way it was a good day trip.  Lee and I have really let other projects build up since we have been traveling so much, so plan on staying closer to home over the next few days and just enjoying the City of Rocks.