Even after spending so much time at the Fort Bridger area, we arrived a little past 4pm at the Red Desert Rose Campground.  Since the temps were in the 90’s in the evening full hookups were called for, but unfortunately there were no Passport America or state/county parks with electric in the area.  When faced with those circumstances, I use All Stays (Lee uses Good Sam) to try and find a decently priced private campground.  My number one criteria in those cases has become whether or not they have a fenced in pet area.  I figure since we are paying premium prices Jack should get something out of it.

This campground was older and the sites were waaaay to close together (couldn’t open our awning), but the park was pretty nice.  While Lee was checking us in I took Jack over to see and he ended up playing with two very nice dogs.  The owners were super friendly and the people who run the campground were as well.  A friendly attitude makes up for a lot in the lack of amenities in my book and we were happy to get settled in. 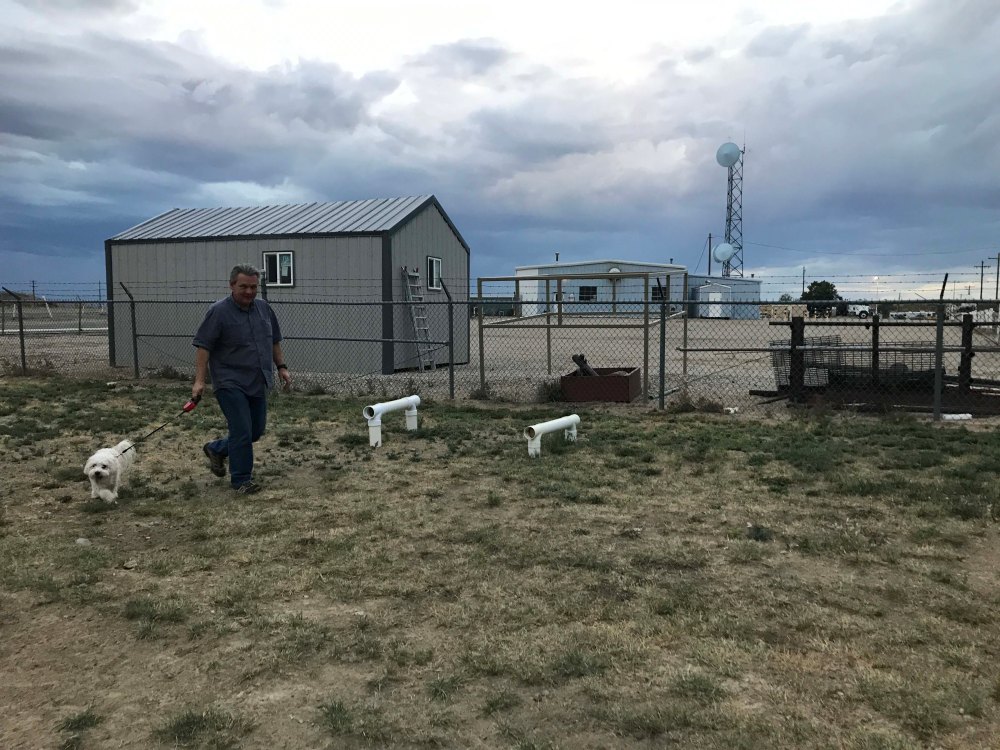 Jack’s not so sure

And he loved this little ramp!! So cute

Part of the reason we had decided to stop in Rawlins was Lee wanted to tour the Wyoming Frontier Prison Museum.  We weren’t sure if it would be open (tours were rare after Labor Day), but he wanted to wait until 9am when they opened and see.  Turns out he got really lucky as they were doing a tour at 9:30am.  He jumped in the truck and off he went and I was happy he was able to do it.  I don’t really like touring prisons (they have bad juju), so I stayed home and worked on some job search stuff, and Lee had a great time.  It was only $10, there was a very small group, and he thought the tour guide was excellent. Really not my thing, but Lee loved it, and he promises to write a post about it in the next few days. Meanwhile, here are a few pics.

After Lee got back from the museum, we hitched up and got on the road by 11am.  We had a relatively short drive to Laramie, but unfortunately I had an interview scheduled at 12:30pm.  I say unfortunately because I am scheduling these interviews first thing in the morning, but this one was scheduled when we were still working at PGE.  And unfortunately the cell coverage was very spotty along this stretch of highway and the initial call went straight to my voice mail.  Thankfully I was able to call him back and the rest of the call I had strong signal, but it got off to a rough start.  It didn’t help that while we were on the call Lee was pulling into the Albany County Fairgrounds and was looking for the sites and it was hard for me not to be distracted.

Like I said, it just didn’t go that well, but I definitely won’t be doing that again.  All the calls I will do first thing in the morning so I don’t have to take them while we are traveling.  The good news is I am getting some interviews, and although the process goes slow, at least there is movement.

Speaking of good news the fairgrounds is just fine.  Because it was the weekend almost every place we checked was booked and the ones that weren’t full had sites for $50 and up.  We just didn’t want to spend that much money so opted for full hookups for $25 a night self pay at the fairground.  Although this fairground was a little more beat up once again there were horses and lots of room for Jack to run around.  That is a good thing because Peyton and Sammy are coming to visit tomorrow and I want to make sure we have room for them.