One of my favorite parts of the parade has always been the horses so I was particularly excited to see the Equest Fest.  This is a side event where some of the horse groups put on a show in an arena.  It is held in the Los Angeles Equestrian Center and the venue was smaller than I thought it would be.  The crowds were also smaller as well though, which was nice, and there was plenty of time before the event to walk around and see some of the horses up close. This was a late day for us (didn’t need to be on the bus until 9:45am) and we arrive at the event at 11am.  Since the show started at noon, Lee and I jumped in the food line first.  There was a pretty limited selection and it was pricey ($9 for two tacos or a burrito) but it was really good.  Then we walked by the outside arena where some people were walking their horses and over to the Budweiser and Wells Fargo area.  I have seen the Budweiser horses many times at the Ohio State Fair, but they never fail to impress and this time I got up close and personal with Clyde the Budweiser dog and his successor April who is still a puppy and somewhat reluctantly held still for a picture or two.

Some kids learning to rope outside

This little girl was really good

The buffalo soldiers and their horses 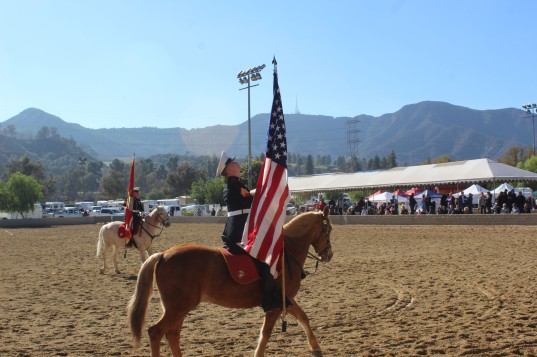 Our military was well represented 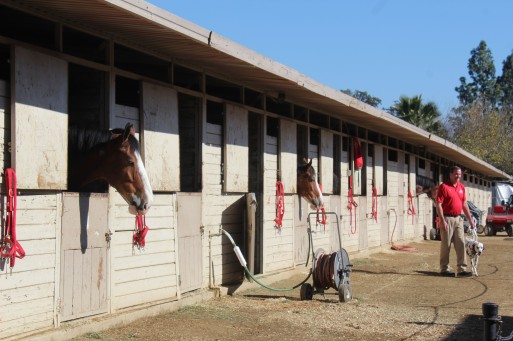 The Budweiser Clydesdale sin their stalls

Clive on the left and April to the right 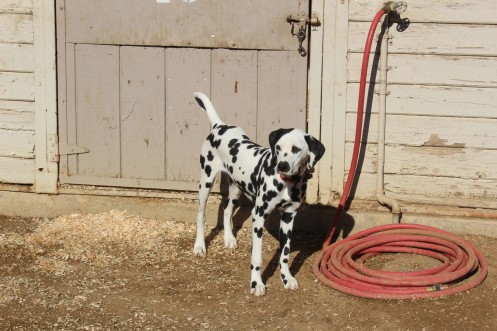 April was super cute and curious. She didn’t ride on the truck during the show. They are just getting her used to the crowds and she did great

Then we walked next door and saw the Wells Fargo wagon and their team of horses.  Wells Fargo sponsored the event and many of their employees attended the event.  They had rented one of the large banquet facilities and had their own VIP access which was neat.  Our VIP seats were very good though, directly across from the Wells Fargo contingent.

The Wells Fargo wagon is a coming down the street

Hey Red check out this spanking new ATV for the parade. Lee thought you would like it

I was also very happy that they had a small Rose Parade tent with souvenir apparel. My love for this parade is such that I didn’t even blink at the $55 price for a fleece jacket.  It was just a question of which one to buy and Lee was very patient as I tried every one of them on before making my choice.  Afterwards we were able to walk right outside and put the fleece on the bus and I used the bathroom on the bus.  One of the nice things about having the bus so far is that it has been parked close by and we can use it as a place to put things.  The bathrooms so far at the places we have been have been crowded, so it was nice to have access to an extra one just for us.  If you ever go to this event there is a bathroom on the left side of the arena as you walk in that is practically empty.  The one on the right side had a line 25 women deep.  That’s been one of the great things about having Lisa and Jim with us.  They came to these events two years before and give really great advice about things like, cold seats, bathrooms, food availability etc.  The practical stuff that can really ruin a sight-seeing day, they are not only aware of but proactively tell us about. I really appreciate that.  After putting our purchases away we went inside the arena to our assigned seats.  It was a beautiful sunny day, but since the arena is covered it did get a bit chilly in there and of course the seats were very tight, but Lee and I had a nice spot and he had room to put up his small tripod so he could get video.  I am glad he did because many of the horse presentations don’t translate well to still pictures, but I did my best, so here is a photo look at what we saw. Each presentation ran about 5 minutes (the entire event went 3 hours) and there was a little time in between groups for the horses to enter and exit.  Not every horse group in the parade was represented, but a nice group of them were.

And Carson Cressley who was a big hit with the crowd 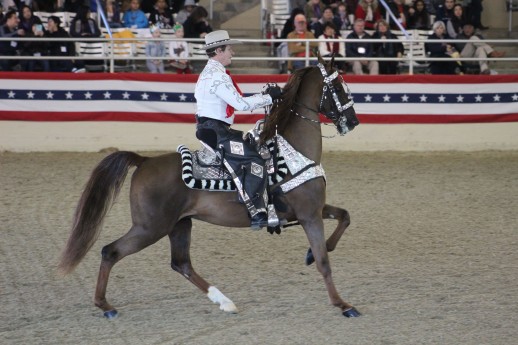 Hi horse was beautiful and he was a great rider 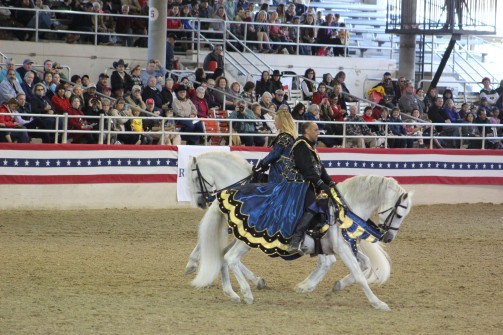 A presentation by Medieval Times who ride pure Spanish breeds 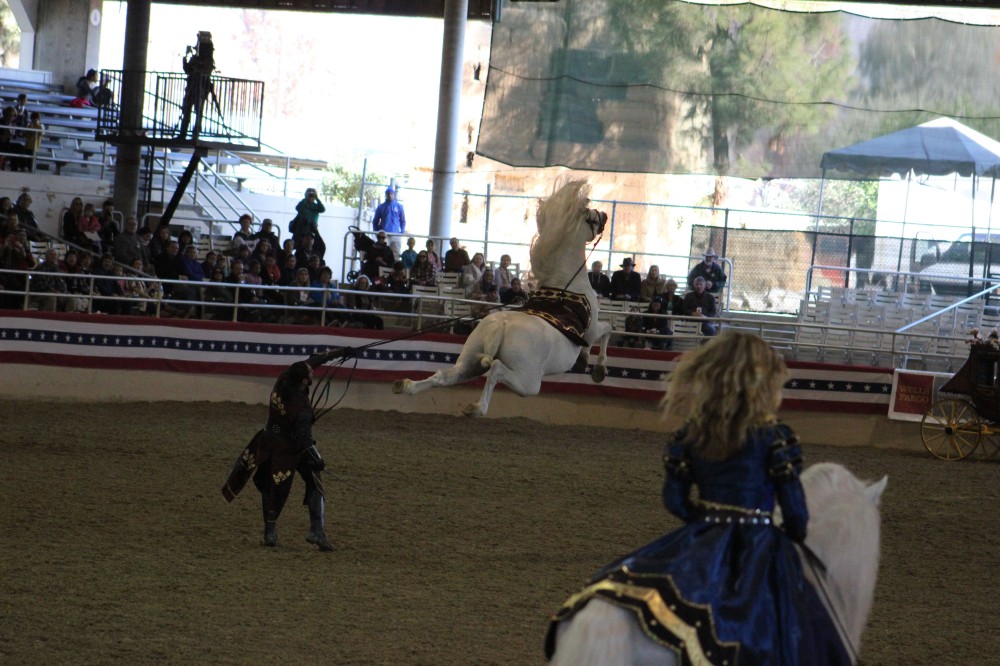 This horse was taught to jump completely in the air and I got the shot!!

My favorite was Benny Martinez who has been riding in the parade for 34 years since he was a little kid. I can remember watching him when he was little doing these tricks

The Dakota Thunder Shires are beautiful. I love draft horses

This group is the Calizona Appaloosa club. The horses were so pretty and the riders celebrate their native american heritage and 1,300 mile journey they made to Canada to escape the western soldiers 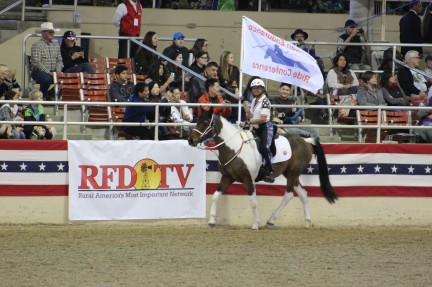 The Scripps Miramar Saddlebreds are honoring the National Parks by including original Yellowstone wagons. In the early days folks traveled to Yellowstone and rode around in these wagons

The next group was the Los Angeles County Sheriff’s Department mounted unit, and they put on a little scene where the mounted police rescued a family from some “bad guys”.  Lee loved this as it was staged like an old wild west show with a little story, I thought it was a little hokey, but the pony was cute and everyone was having a really good time. 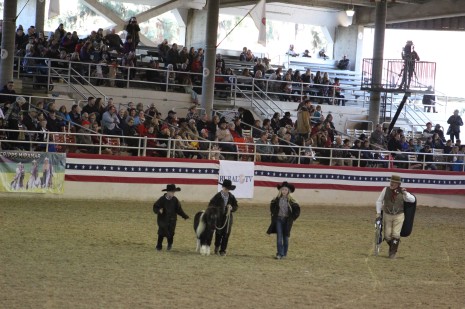 Check out these cute, tiny dusters 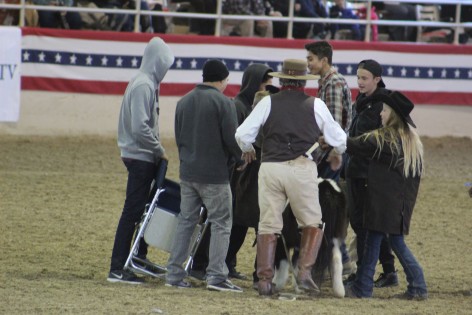 The “bad guys” surround them

One of the bad guys gets roped 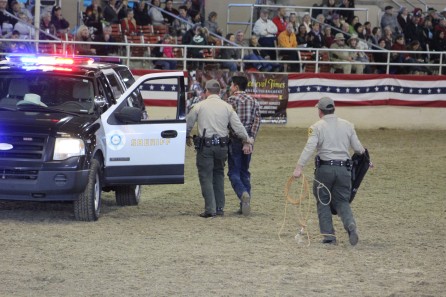 One of the horse hit the jump

And the helpers cleared it very quick

As huge fans of our National Parks we enjoyed the Rangers 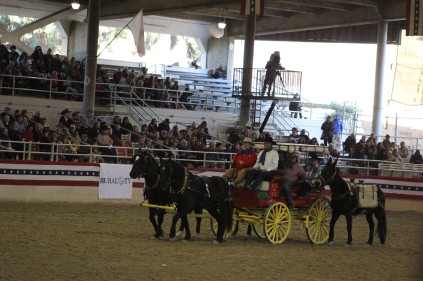 Lee’s favorite was the Fort Sill Artillery half section

They even fired the cannon. Loud!

They have several mother daughter teams and one three generation family!

The Budweiser team came at the end and was a huge hit. The horse are selected by size (smallest in the front) for their position in the team. The front horses need to be more maneuverable and the back horses more powerful, which I did not know 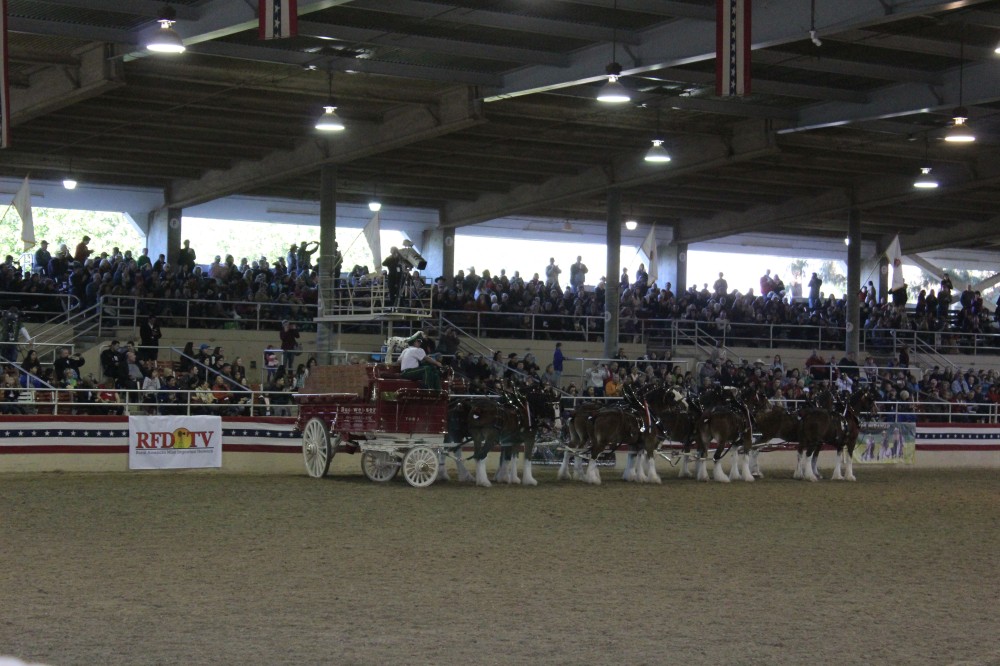 After the Budweiser team the Cavalry came back and gave a riding demonstration with guns, rifles, and sabers 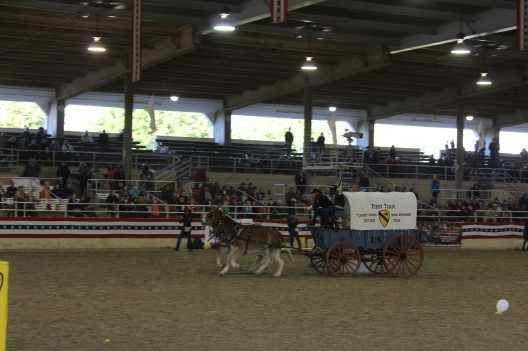 Along with their mule team 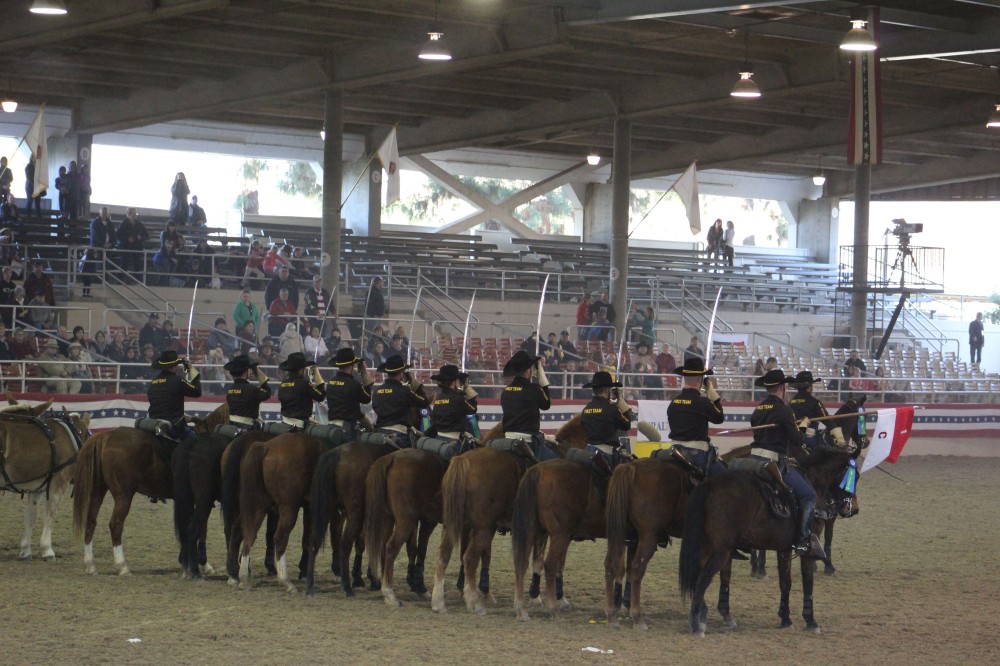 I loved that the team is commanded by a woman. They introduced them all at the end and gave their home towns. The kid from Pasadena got a big cheer

Overall it was a fun event and although I am not sure I would spend $40 to do this as a standalone I am very glad it was included in my package.  Plus I got my Rose Bowl fleece without crazy crowds and the seat cushion was a nice bonus.  Next up, Bandfest and the Ronald Reagan Library then thankfully we get a free day.  I am not used to this much activity!!