We could have stayed much longer near Goblin Valley, but not having internet for more than four days was a challenge for all of us.  After taking a look at the weather, we decided to head back to the boondocking spot in Torrey in the hopes that it would be clear. We knew it would be windier and colder there, but it was also the perfect jumping off point to explore Capitol Reef and Route 12.  We had a long list of things we wanted to do in the area, and were looking forward to being able to explore with Deb and Steve.  Thankfully the spots were open ,and we were able to all fit in, but unfortunately it was cold and overcast.  Since it didn’t look like the weather would improve all day on Tuesday we decided to take one of the scenic drives.   Cori and Greg volunteered to take us all in their Chinook, so we set out for Burr Trail Road which we knew would ultimately lead us to Anasazi State Park in Boulder.

Going in Style in the Chinook

Deb and Steve on one side

And Lee and I on the other. It was nice not to have to drive for a change!

Greg did all the hard work, with Hobie as his copilot!

Initially the views were a little bland

When the pavement ended the scenery got much better

And gorgeous fields of flowers

Greg was an awesome tour bus driver. Anytime we wanted to get out we just told him and we took some pictures. 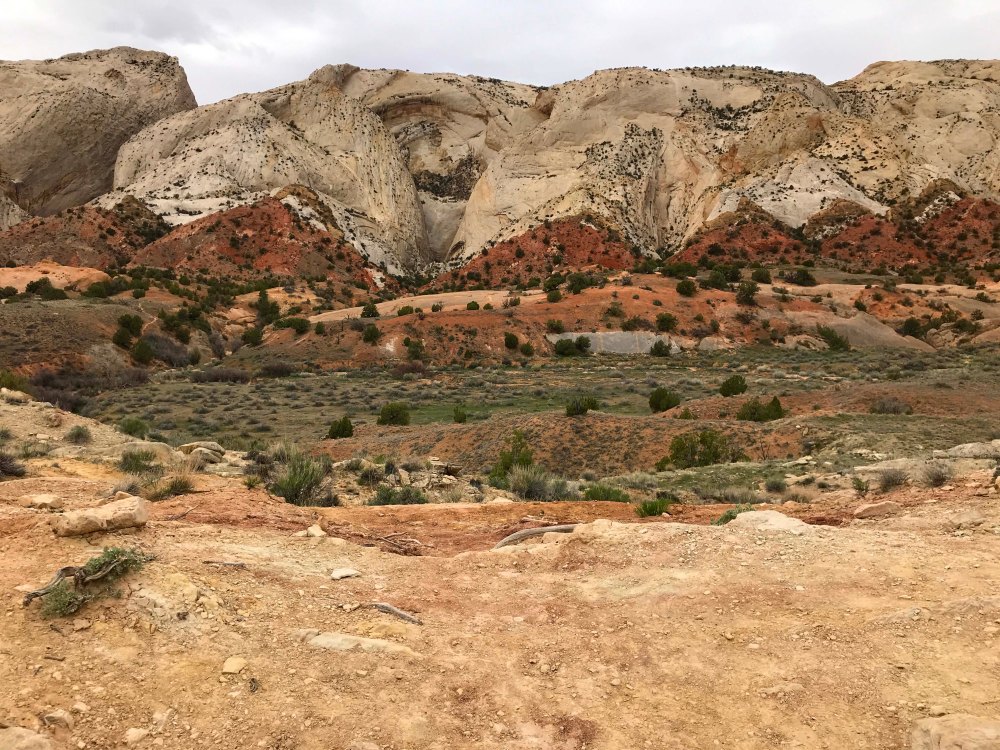 Eventually we hit some construction which led up into the switchbacks.

We had read about these but nothing did them justice. Super cool drive and there were so many of them. Amazing. 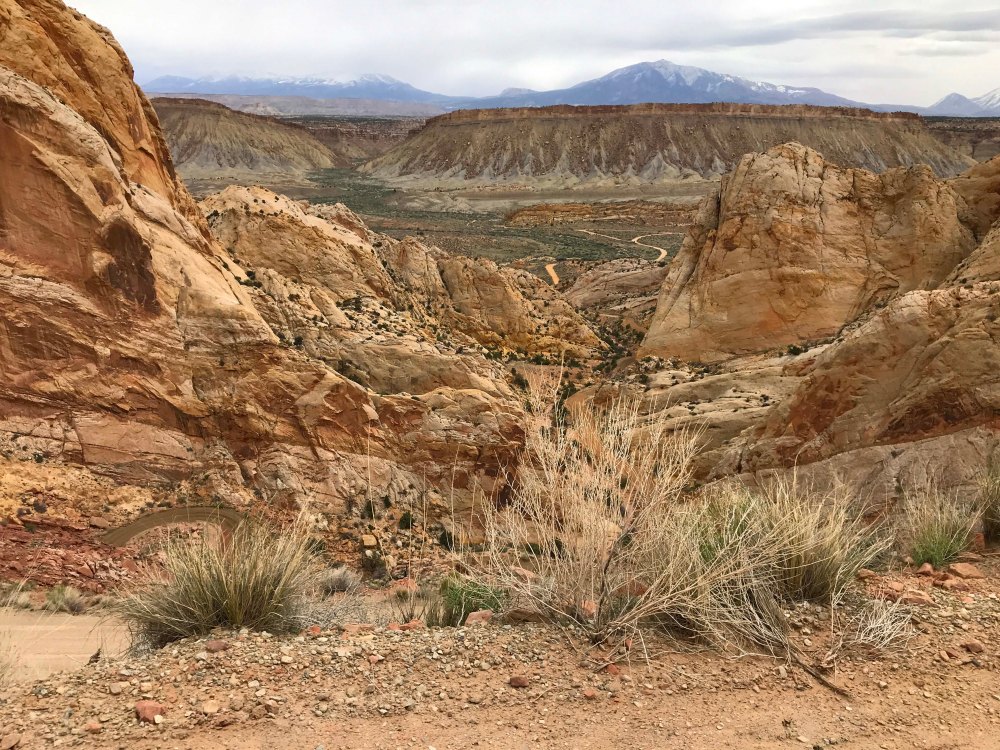 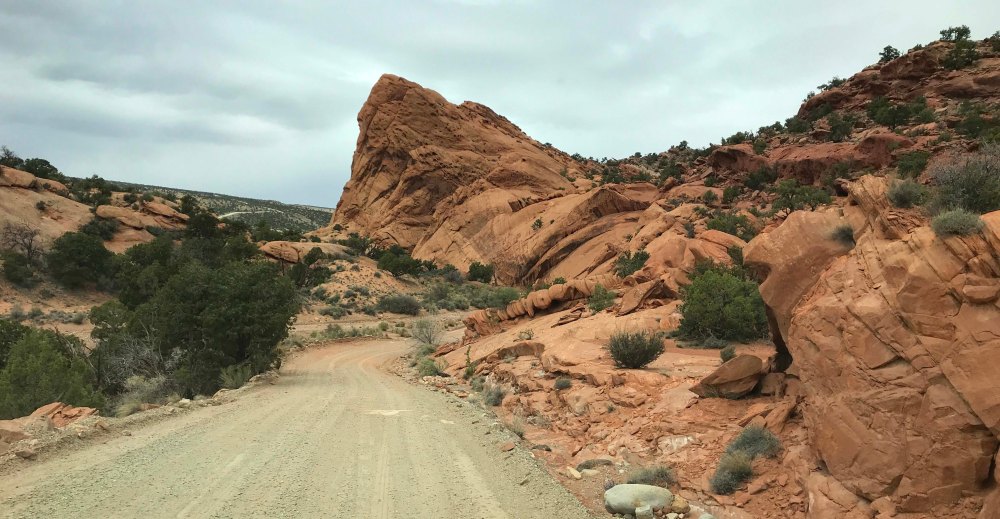 After the switchbacks there were some beautiful rock formations 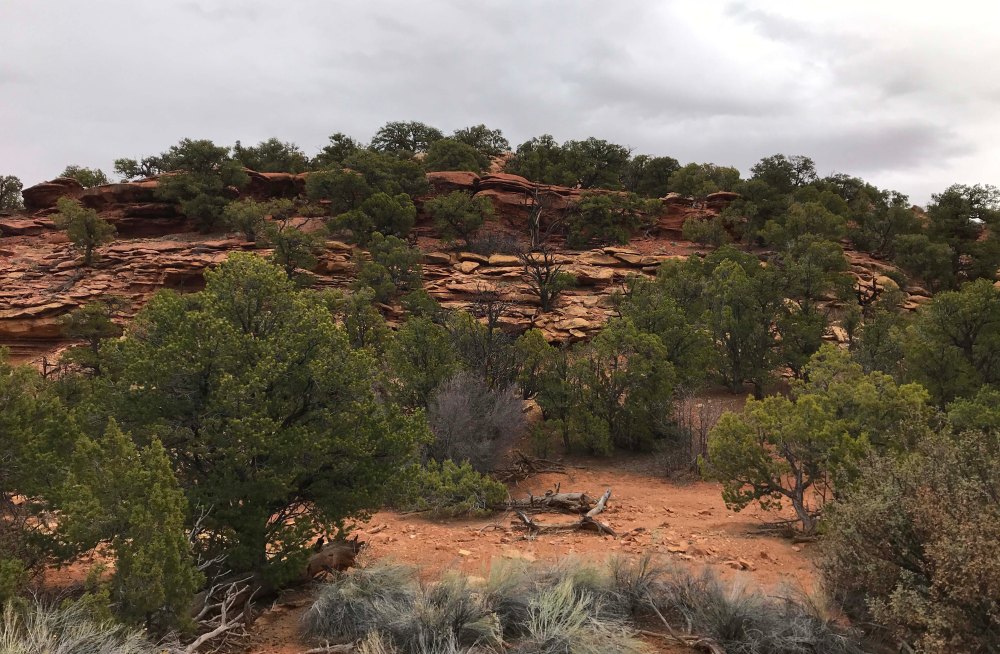 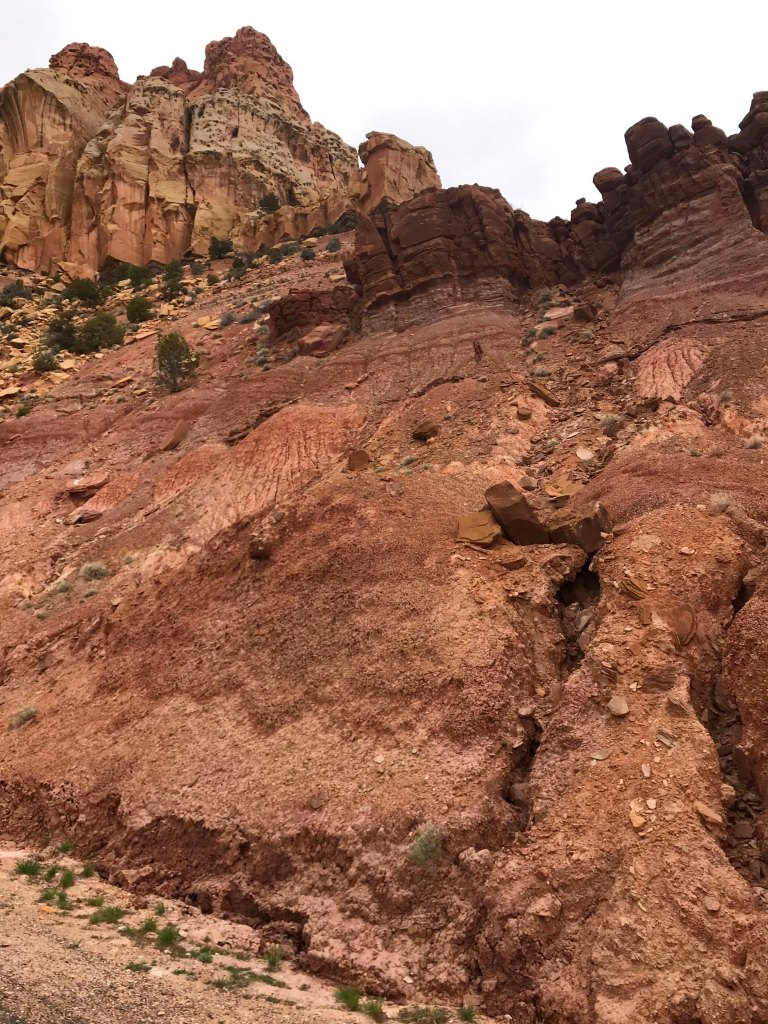 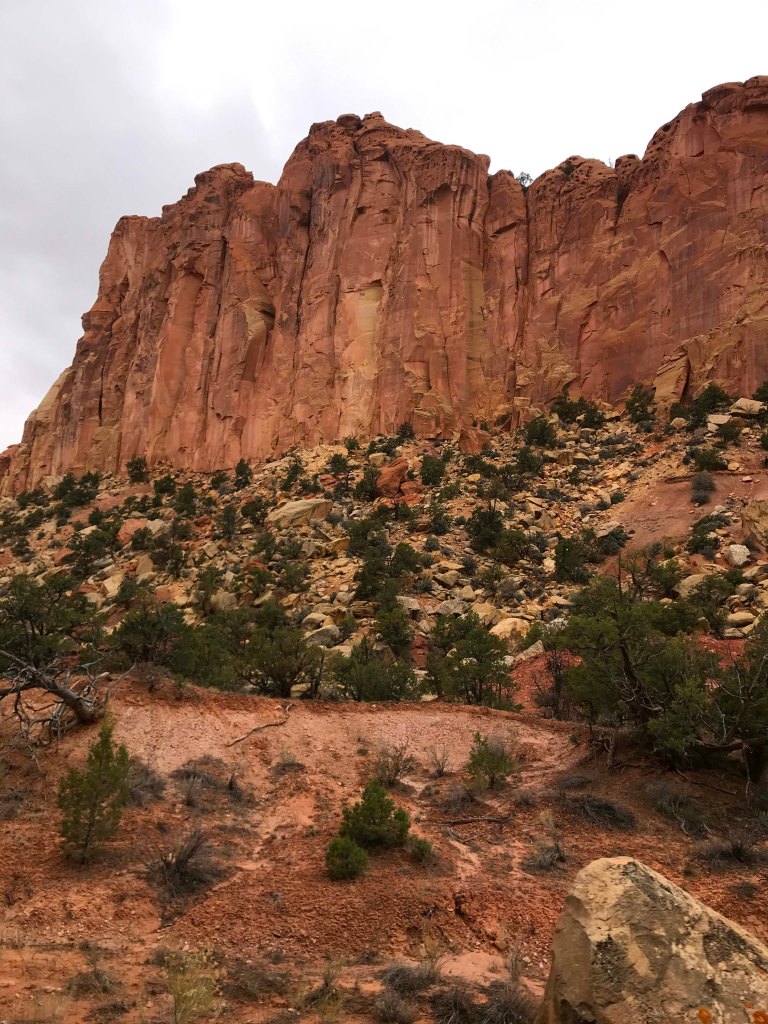 Finally, and it took a while, we just ended up on the backside of Boulder. We were all starving so we checked out the restaurants in town.

For a small town they had surprisingly good menus although they were pricey and somewhat limited. We ultimately chose Burr Trail Grill.

My pulled pork sandwich was so so. 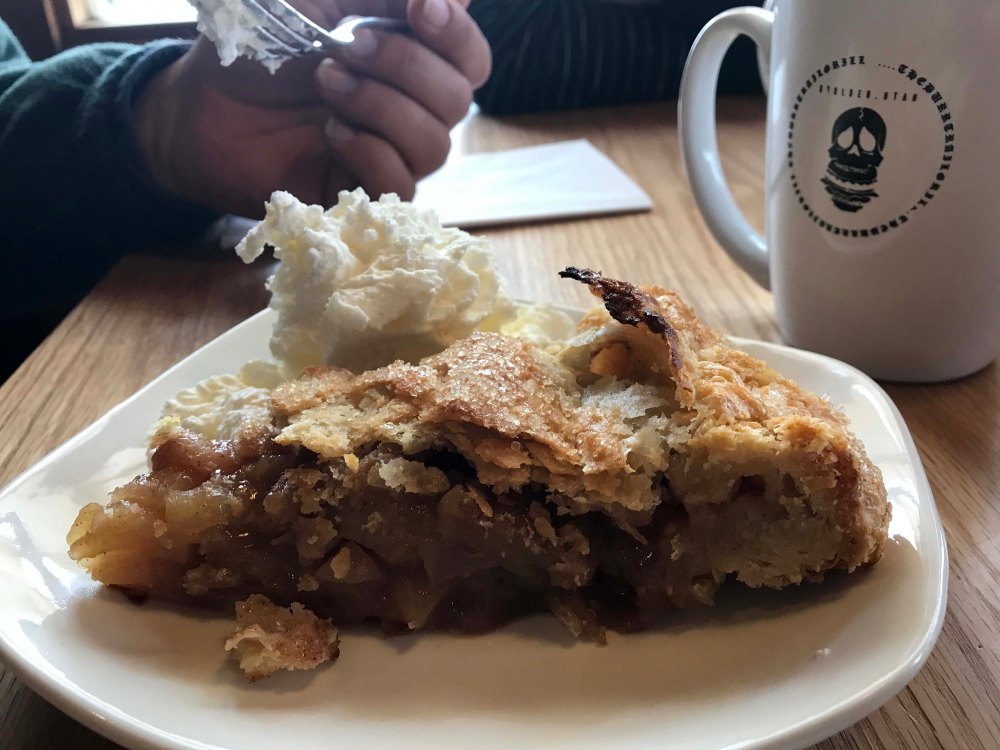 But they had beautiful pies in the desert case. We ordered this piece for $7.

And Lee had his very first piece of pie post heart attack. As you can see it was a good piece of pie and he was happy.

(Speaking of Lee, I should probably take a moment and give you an update.  By this point he had completely stopped smoking and lost about 17 pounds.  I had completely quit as well, but had put on some weight in the process.  We were both looking forward to some hiking to help with the cravings.   The Chantix was still working well with minimal side effects, although I still get nauseous from it.)  Anyway, after eating lunch we headed over to the small state park which only cost $5 to get in.  It was a small site where ancient Pueblans used to be, and although the museum wasn’t anything special it was reasonably priced, and a good rainy day activity. Thankfully the rain had held off until we got there, but it was starting to drizzle. 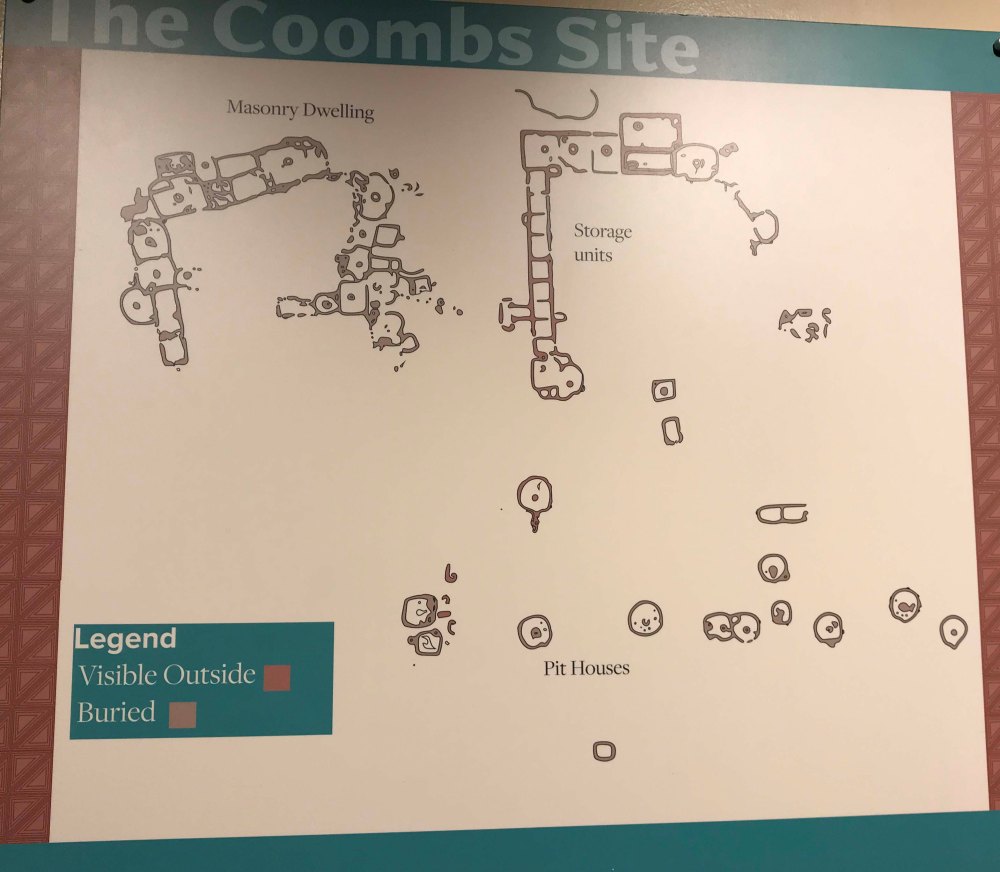 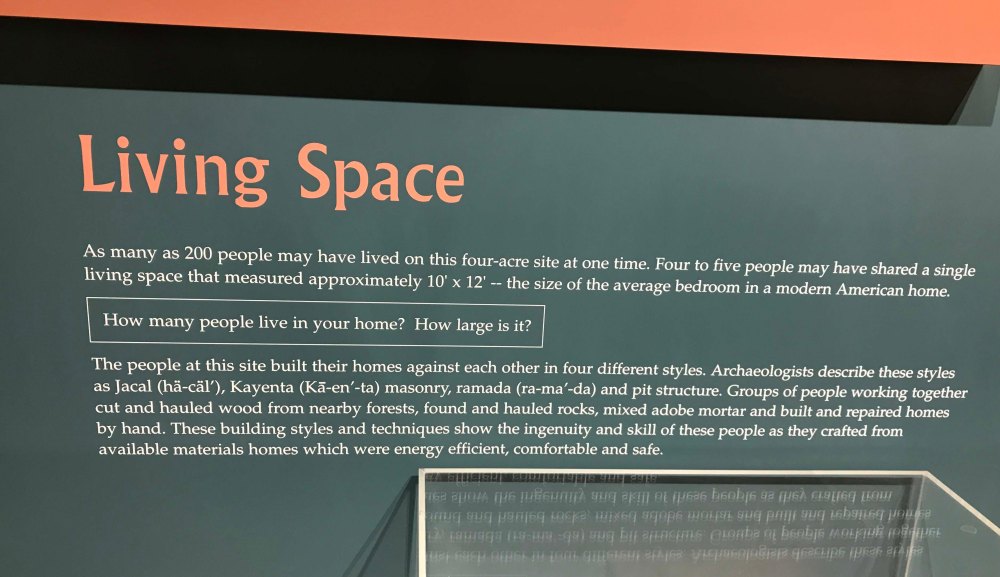 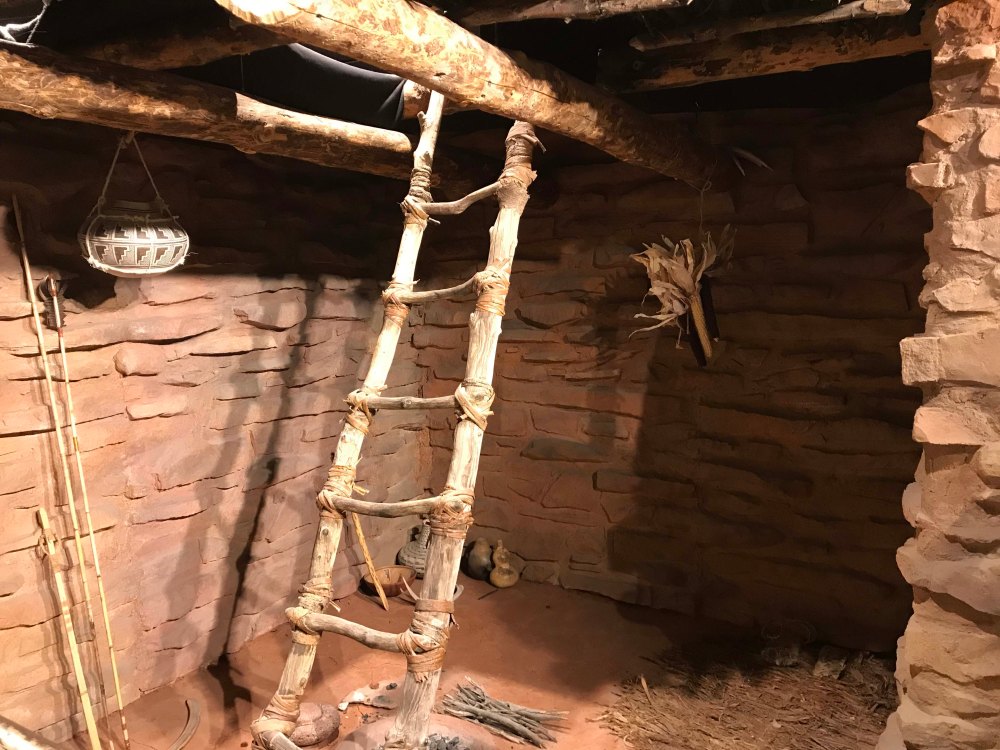 This was a really great display as it showed the four different tribes of pueblans in the area. They lived in different types of homes.

I also liked this which showed artifacts found in the area at different times.

The actual area itself was very small, especially compared to other places we have been, plus it was cold and raining so we didn’t spend much time there. 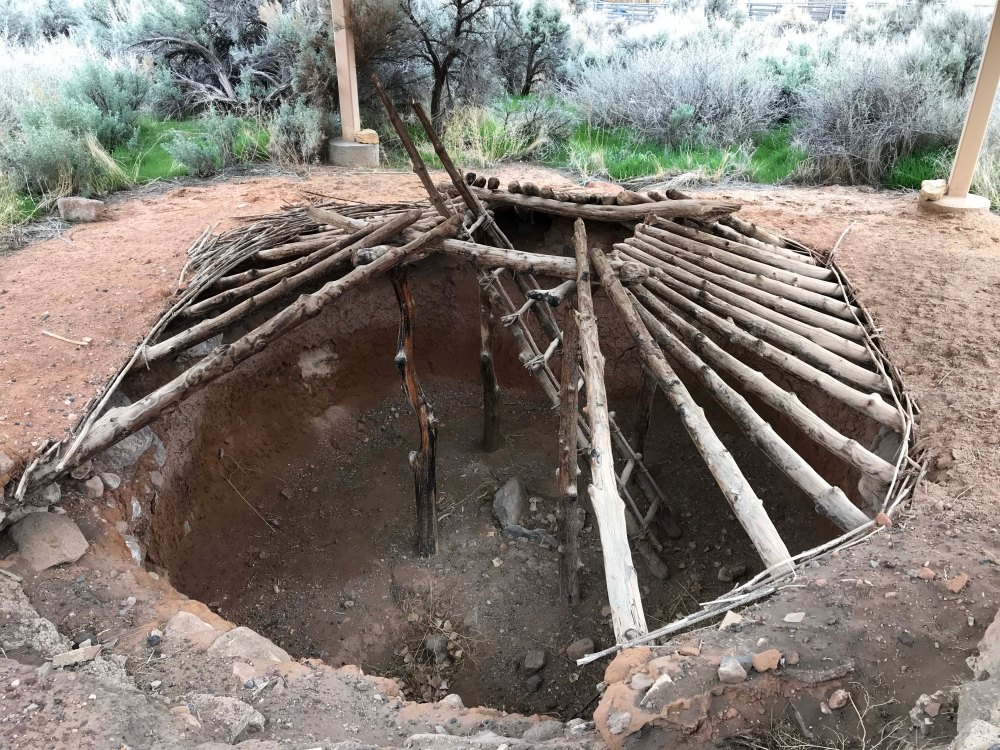 The gift shop was very nice and had this beautiful display of Navajo rugs.

After the state park we headed back to Torrey and unfortunately Greg had to drive us over the mountain to get there.  It was snowing on our drive through the mountains between Boulder and Torrey which made a long drive day even longer.  He was a trooper though, and we all really appreciated him driving us.  The next day we were all headed to Calf’s Creek  for a 6 mile hike to a waterfall.  Lots to do in the area!