I have been to Florida many times in my life including several summers spent on Singer Island, but I have never lived in Florida before.  I have to say, I finally get why people are snowbirds.  The weather is absolutely wonderful.  It’s been in the low 80’s almost every day and although it does rain frequently, it is usually those quick showers that are over in no time.  It’s also very breezy and I am enjoying very much the sun on my face especially when I see that New Hampshire is experiencing ice storms and weather in the teens.  I know, I am sorry, I certainly don’t mean to rub it in, but part of me is wondering why I didn’t do this a long time ago.  Yes, I am sure I would find the summers miserable, but I won’t be here in the summer, and for right now this weather is absolutely amazing. (I have no such qualms. New England weather sucks in the winter, even people who have lived there their entire lives think so. – Lee)

It’s been a busy week…as you know my grandmother passed away, and I spent Monday, Tuesday, and part of Wednesday with my mother, grandfather, and aunts and uncle in North Palm.  I’d like to talk about what I did on the other days though.  When we pulled into the site, we were a little taken aback that our site number had been changed at the last minute.  I made these reservations months ago, but I have to say I am glad our site changed.  We are staying for 10 weeks (while Lee goes to RV Tech school) at the Rainbow Village Largo 55+ RV community. Yes, I know we are not 55+, but they are allowed a certain amount of guests who are under that age and we got an exemption which cracks me up.  (Trace is so close to 55 as to make no difference, but we’re calling it an “exception.” I’m considerably younger, but since we’re married they had to let me in as well. – Lee) We had pretty low expectations coming in.  Just a reasonable place to stay close to the school, but I really like it.  Our new site was pretty tough to get into, but once there, we are in a nice spot.  So far no one is in the site we face so it’s like being on a double lot.  We are also surrounded by a group of French Canadians and it’s nice hearing them speak in French all the time.  Adds to the atmosphere.  (In addition, there’s something really nice about not being able to understand conversations that you can’t help but overhear. It just turns into background noise. At our previous seasonal site in Swanzey, people were so loud, it was almost impossible not to just start participating. Sometimes I did, quietly enough so they couldn’t hear me, which is a shame, in retrospect. I often had compelling things to add. Also, everyone here thinks I’m Canadian, and they keep speaking to me in French. I keep apologizing for not being Canadian, but that seems to just reinforce their idea that I’m Canadian. It’s a vicious circle, with no end in sight. C’est une honte. – Lee)

So far people are friendly but have largely left us alone which is nice and if we do want to get to know folks there are plenty of opportunities with a daily calendar that has 3-5 free activities a day.  It’s clean, neat, and I feel completely safe as we are gated in and surrounded by our own security force of older people who are paying attention to what’s going on!!  Plus 65% of the structures are permanent so it feels like a little community more than a trailer park which was a concern of mine. 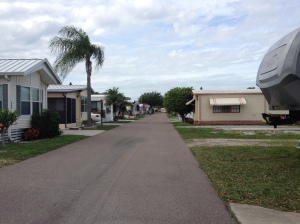 Right outside our camper in Rainbow Village, Largo Fl

Even though we aren’t on the water or really near anything cool there are many things to see and do within a half hour drive.  The beach is 15-20 minutes away (depending on traffic) and Tampa, Clearwater, St. Petersburg, and Tarpon Springs are all within easy driving distance.  It’s quite a bit cooler here than even two hours south, and since we are still getting acclimated to the weather appreciate that.  Lee really wanted to see the sun set on the ocean since he hadn’t had the opportunity since the mid-90’s, so on New Years Day we went to Clearwater Beach which is considered one of the best beaches in the US.  The beach is beautiful with tons of white sand, but it was a bit crowded for my taste and after checking out Pier 60 (which has vendors and restaurants) we moved down to Sand Key Park which I liked much better.  It was $5 for an all day parking pass at Sand Key (versus $3 an hour at the Hilton on the Clearwater beach) and much less crowded.  We stayed for quite awhile looking for shells, watching birds, and eventually seeing the sunset and it was a very nice experience. 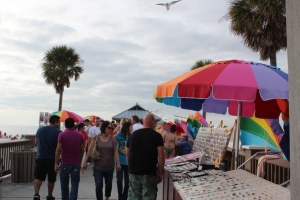 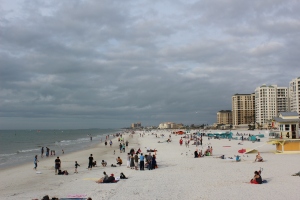 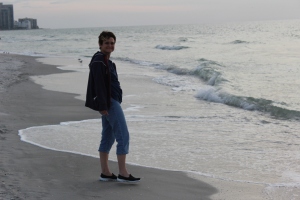 Sand Key State Park (Totally different ocean than Pier 60. It’s not even on the same side. This one is on the right, and the other one is on the left, as the pictures show. – Lee)

Message I wrote to Lee on the beach (Never trust anyone who writes an I.O.U. in something as temporary as sand.- Lee)

Thursday and Friday we spent the time getting acclimated to the area.  I was nervous about my first haircut here, since I had heard horror stories from people about changing hairdressers and had the same person cutting my hair for over 10 years, but we found a Super Cuts and Lindsey did a great job.  We also tried out one of the three local grocery stores. We’re going to try them all and see which one we like best. I am finding those types of things to be unsettling..not knowing which grocery store to go to, or where to get my hair cut, but as I knock each one off my list I am finding it’s much easier than I thought it would be.  I am overdue on a teeth cleaning as well, so calling Aspen Dental soon which Cori recommended to me because they are a national chain, so I will tell you how that went after the appointment. I also started cooking again, something I have kind of gotten away from with all the traveling and actually menu planned and shopped for all next week.  My first couple of attempts; Individual Beef Wellington and Chicken Parmesan were not that great (meat overcooked and undercooked respectively), but Lee appreciated the effort and since he only has 1/2 hour for lunch at the school every day it’s important I get back into the habit.  Plus we are absolutely committed to living within our budget this month.  Originally my intention was to start posting budget numbers last month, but things were so crazy with the moves and unexpected startup costs, I decided to start fresh this month.  I’ll be completely honest, we did not do as well as I would have hoped but we also didn’t completely blow the bank either.  My advice is expect to plan to spend extra that first month, just like you would if you bought a new home or moved into a new apartment.

Saturday we drove down to Fort Meyers to see Jo and Ben.  One of the best things about being here is so many of our friends are close by.  We saw Kelly and Bill and the night we came in (they made us a terrific dinner) and we hadn’t seen Jo and Ben since they left Maine.  Ben took a six month contract with the Fort Meyers hospital which he likes very much and Jo is working on call for 3 different hospice companies.  Plus they really really like their site which sits right on a canal and they have their own little private boat dock which goes to a river which has tons of manatees in it.  (That is utter nonsense. There is tons of water, tons of birds, tons of mangrove trees. There are not tons of manatees. Not even a few pounds of manatees. We saw no manatees. We were there, we were in the river, we looked. No manatees. I think it’s all a big marketing ploy. Just like in New Hampshire with their alleged “moose”. I lived there over 13 years, never saw any “moose”. Don’t believe the lies about the moose, and the manatees. – Lee) After tons of hugs, talking a bit, and eating a quick lunch we set out on their boat.  Ben took us up to the power plant which dumps hot water into the river and is a favorite hanging out spot of the manatees.  (Suuuuure. – Lee) It was a glorious day and although we didn’t see any manatees we did see lots of birds and some very cool mangroves.  We had a terrific time and I am so glad we are close to our good friends again.

Ben and Lee on the boat (You see how Jo and Ben are almost gleeful in their laughter about how we feel for the “manatee” story? – Lee) 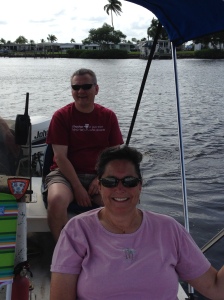 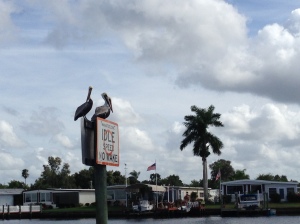