After the whirlwind experience of deciding to get a camper and buying one in just a few days, we were very excited to get started. We figured the only way to try out our new camper was to take it camping! We don’t really have space to park it or set it up at our house, we live in a regular neighborhood with pretty small lots, and a driveway with way too much slope for a camper, and the storage lot that it’s parked at isn’t very woodsy, so we picked a place about 15 minutes from our home to give it a trial run.  Picking someplace close was an excellent decision, because as things came up we had ready access to our house and the little things we needed there…like food and showers. Picking a site was the first step and Lee called the campground and told them we were first time campers.  This was smart because the campsite manager picked a great spot for us that would be easy to get in and out of.  Start with a pull through! The best sites are a tougher to get into, but it is your first time so why make it harder than you have to? Trust me: the challenges will come in other areas. (I’m really glad we went with a pull through site for our first outing. Contrary to popular belief, men are not born with the innate ability to back up a trailer, and I never had an opportunity to learn, so the last thing I wanted to do was start the weekend by knocking down trees, old people and little kids. Or damaging my awesome new toy. – Lee)

We took over the storage site from the couple we bought the camper from (think Storage Wars) and it only $43 a month.  The good news was the price, the bad news was that it was pretty tricky getting it out of there.  Bringing it back was a piece of cake, but we aren’t there yet!) Pulling it out required two people and some fancy maneuvering on the part of my husband, (who in addition to being very handsome, clever, and manly, is also very handsome, clever and manly. – Lee)  Once we were on the road, Lee drove very carefully.  He has a CDL license so he’s no stranger to driving 26′ straight trucks, but a trailer is different. Not to mention we were figuring out not only the camper but the features in the Ford F150 XLT we bought.  We also learned that campgrounds are usually at the end of long, twisty, turny, bumpy roads. (If you’re new, here’s a couple of very simple things to remember. The trailer is much wider and longer than a car, it takes some getting used to keep it between the lines. Take turns wide and slow, ignore the frustrated drivers around you, they don’t have to pay your insurance. Slow down, and you can always stop and reassess if you get in a bind. If you need to make corrections, make small ones. Leave LOTS of space between you and the idiot in front of you. It takes longer to stop pulling all that weight. Also, everyone but you is a bad driver, and they’re worse when you’re pulling a trailer. – Lee)

Once we got to the campground we signed in and again the manager was very helpful, telling us some basic ground rules and giving us a map of the site.  It’s amazing how nice and helpful people are once they know you’re a newbie! The most important thing she said was “If you need help ask the seasonals!” (the folks who keep their campers permanently at a site throughout the season)

By this time it’s starting to get a little late and we got to the site ready to deploy.  This was our big moment and we were incredibly excited. Except…and it’s a big except: we couldn’t get the camper to decouple from the truck.  Lee tried everything, cranked it up, cranked it down, put the trailer stabilizers down, put the trailer stabilizers up, and then down again.  Put some blocks under the tongue jack. Cranked it up, cranked it up some more. Cranked it up a lot more. It just wouldn’t come off the ball. At one point, the truck bed was up so far the wheels were nearly off the ground. Finally I couldn’t take it anymore and I started to walk over to one of the permanent campsites.  I knew it was permanent, because the couple had a porch and a huge stack of wood; obviously they were there to stay. Before I managed to get all the way to their site, I heard through the trees, “Would you like some help?”  “Yes, please,” was my prompt response (my mother didn’t raise a fool). They had been enjoying the show quietly; entertainment is scarce at campgrounds. Two very nice gentlemen in their 60’s came over to take a look, with lots of good-natured ribbing and teasing about “amateurs”. In all fairness to Lee,  it took them awhile to figure out the problem.  The hitch needed some WD-40 to loosen it up and you have to slide it back and then click up to release.  The slide part is what was confusing so it took another 20 minutes before we heard the blessed click of the trailer releasing. Then they had a few choice comments for people who sell things to other people without fully explaining how they work, which took the heat off us. (Here’s another word of wisdom: Leave your ego at home. There’s no shame in asking for help. Most of these people remember how it is to be new, and they’re thrilled to help. Let them, and pay attention. And ask questions. People love to tell you what they know. But also keep an ear out for the bad advice. – Lee)

Finally we could get started! Of course, we needed to listen to more sage advice from the two gentleman who helped us and Lee took this with grace.  That’s part of the deal when you ask for help, listening to all the other help…but I do have to admit we were pretty antsy to get started so I am not sure how much of the advice actually registered.

Now for the fun part.  We plugged in the power and water, set up the corner stabilizers, opened up the living room slide out, and lowered the canopy.  I have to say when the canopy went out I was VERY excited.  There was something about having a canopy of my own that really spoke to me and at that moment the camper really felt like it was ours.  (One of the first things I wanted to do was get the hot water going. For some reason that was really important to me. Maybe I expected casualties, and wanted to be able to boil sheets, I don’t know. We weren’t sure how much propane we had, and we had an electric site, so I decided to get started heating the water using the electric element. After about 30 minutes, there was still no hot water, but I noticed quite a lot of water running out of the outside access panel for the water heater. I opened it up and there was a hole where the water was coming out as fast as it could. Laying inside the door was the anode rod. If you don’t know what this is, you can Google it. It didn’t take me long to figure out that the anode rod and the hole were the same size, so I turned off the water, and put the rod in. Believe it or not, I had brought some pipe tape with me, because I’m smart. Just not smart enough to check the anode rod before turning on the water. Once I got it all put back together there was still no hot water, so I switched it over to propane. I think I might have fried the electric heating element by having it turned on with no water in the tank, but the gas heated the water just fine. I should have read the manual first. The moral of the story is: Read the manual. – Lee)

As we went around doing the setup I started a list of things we would need to buy.  I’ll admit I am a bit of a list maker, and sometimes this can actually get in the way of having a good time, but in this case it turned out to be absolutely vital.  Make the list as you are gathering first impressions.  Write everything down.  You may not do it all on day 1 but it will give you a solid reference point for the next step.

By the time we set everything up (and created quite a long list) it was really late.  It didn’t occur to me that the refrigerator would take so long to cool down and in any event  I hadn’t brought any food, so we ran back to the house and grabbed a quick bite.  Another bonus to being so close!  A last-minute look to see if we forgot anything and then we went to Target to get all the stuff on our list. It was a long list. And it cost more than we originally thought it would.

We had negotiated $1,000 off the camper price with the couple we bought it from because we knew we were going to need money to get things started.   What I didn’t know was it is very similar to when you bought things for you first apartment.  You need one of everything, but there is no sense in spending a ton of money.  The balance between reasonably priced and still nice is interesting, plus in the camper you need to throw in the fact that you have very limited space.  As we made our purchases we were constantly thinking about space and storage which often lead us to the less expensive and smaller/lighter options. Finally it was time, and off to Target we went.   Now let me say here that any comparable store will do, but we like Target and it’s amazing what you can get for $800 there.  I think we filled three carts.  I won’t bore you with everything we bought but below are some of the key items that really mattered to me

(At the end of the trip we knocked a ton of things off our list, but there were many camper-specific items that Target doesn’t carry, more on that tomorrow. – Lee)

After filling up three carts and loading it all into the truck, it was back to the trailer to get some sleep.   A quick note here on the bed.  It’s a queen but a short queen. We didn’t even know there was such a thing. Our 2nd best sheets from home worked fine, but they do hang over quite a bit.  Also, the mattress is designed so the bed folds up revealing a great HUGE storage space underneath.  This is an ingenious design but unfortunately leads to a pretty thin mattress.  Lee slept really well, but I am a side sleeper and I have to say I woke up several times and it did feel like I was sleeping on a board somewhat.   The next day “fixing” the mattress definitely went on the list.  Either way it was exciting…our first night in our new place. 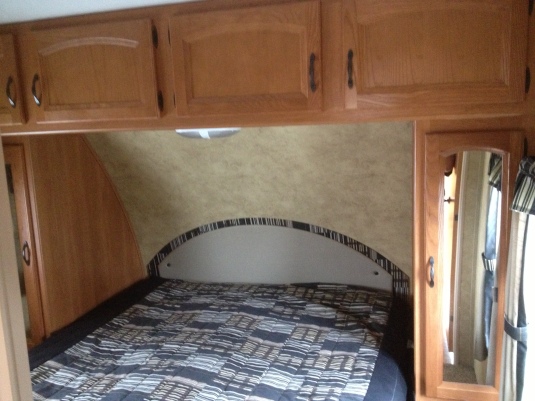