For the last couple of years I have been intrigued about the hot springs in the Mt. Hood area, but for one reason or another I have never gone.  First of all, hot springs are really not Lee’s thing, and since I never felt comfortable going alone, I just never went.  Why didn’t I feel comfortable?  Well, public nudity is definitely a thing here in Oregon, and although I don’t have anything against the idea personally I am not sure I would want to walk alone to a situation that involved it.  Also I had heard that these places attract drugs, and again, not a place I want to be alone.

This year I stopped at the Ripplebrook Store to get some ice cream and saw a sign stating that the forest service had closed Bagby for remodeling and it had just reopened.  This was interesting to me, because I thought it wouldn’t have had time to get trashed and I decided I was going to go whether or not Lee wanted to.  Since the weather had been terrible for several weeks, he wanted to get out and said he was willing to take the hike with me, although he wouldn’t be getting into the hot springs.  I wasn’t sure I wanted to either, but grabbed my bathing suit just in case and we took Jack and headed that way.

All I had to get me there was a pretty terrible Forest Service map and although it was a pretty ride, the roads were not very well marked.  At the very end of the drive we had to turn on Forest Road 70 and the only markings were spray painted words on the pavement. Since there is no cell signal anywhere close to the springs, I highly recommend fixing it in your GPS in advance and carrying a paper map with you.  We are pretty good at navigating and we had to pay close attention to not get lost.  Also make sure you have a full tank of gas, flashlight, food and water, and a good spare tire.  These mountain roads are not heavily traveled and you need to be able to support yourself if something happens. 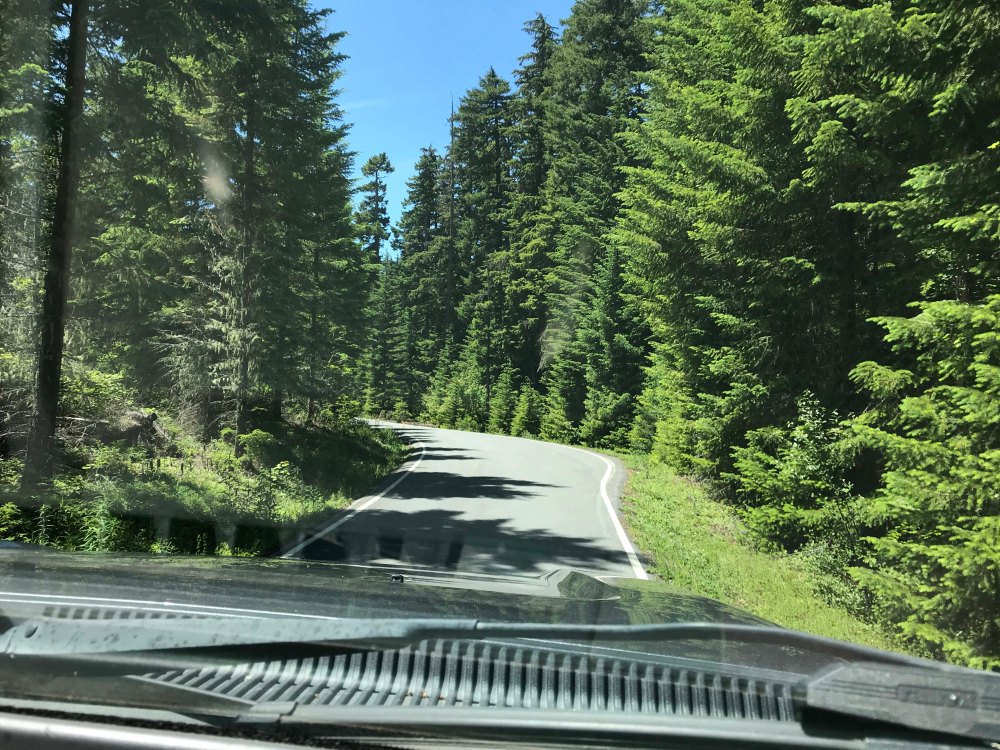 Don’t let the nice pavement fool you. These are single lane logging roads.

It was confusing when we arrived as to where to park, but we pulled in when we saw the Bagby Campground sign.  There is a large Day Use parking area with pit toilets and a pay kiosk.  You don’t have to pay to park and hike but you do need to pay $5 a person if you want to soak.  We went ahead and paid $5 and then started up the trail.

The single tubs was the area where nudity was allowed but these are all closed. 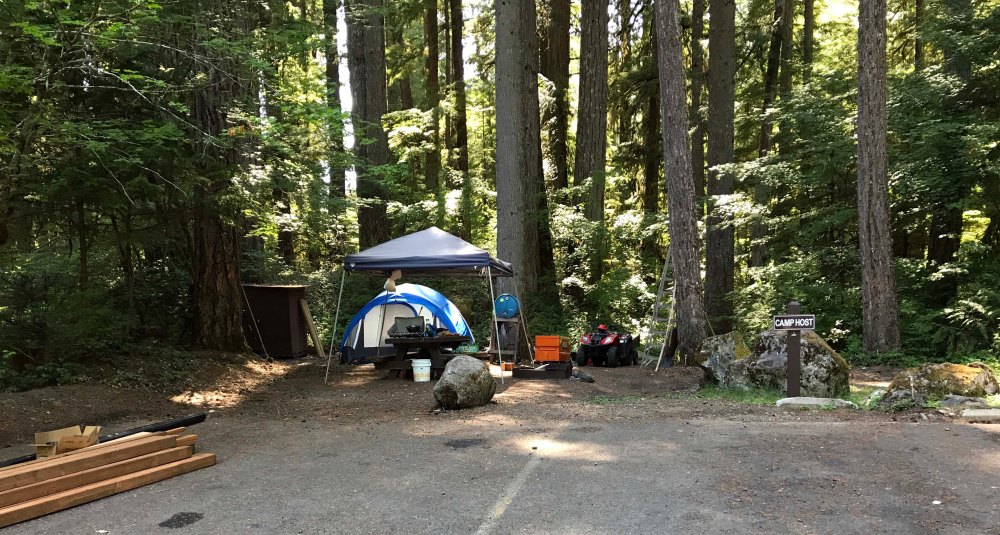 Talk about a remote camp host job. He did have a nice ATV though.

The hike to Bagby was 1.5 miles each way, and I have to say one of the best hikes we have been on in the Mount Hood area.  The trail was extremely well maintained, only moderately difficult with slight elevation changes, through beautiful mature forest, and had great bridges along the way. Jack had a fantastic time! 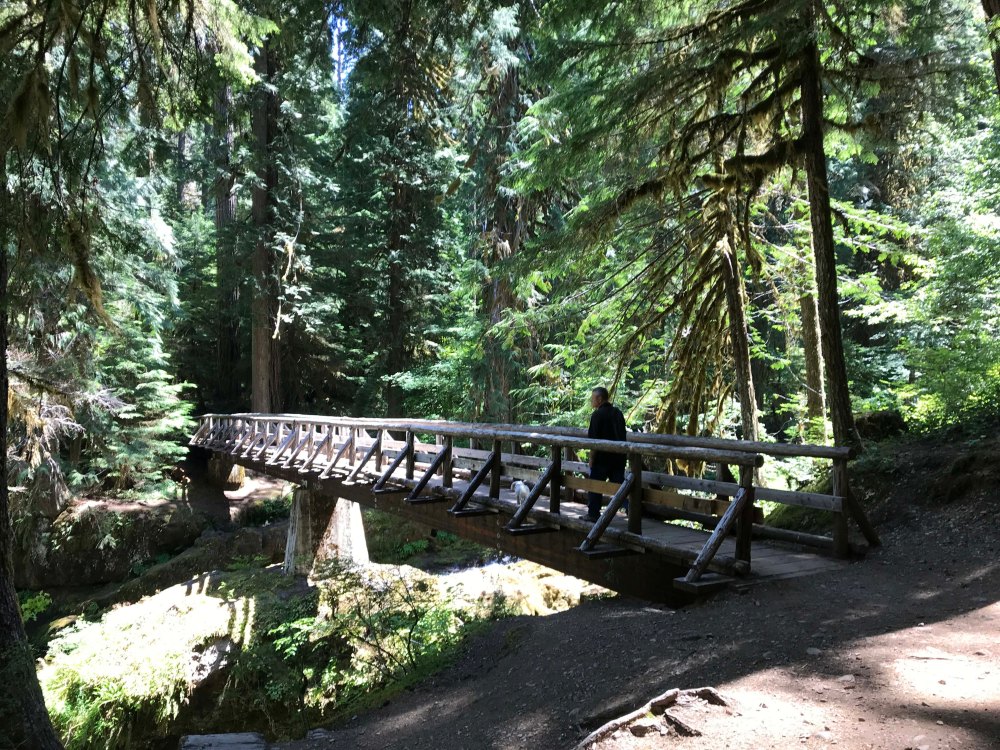 Every bridge was different and I really liked them.

Jack loves running on big logs, so this was a good place for him. 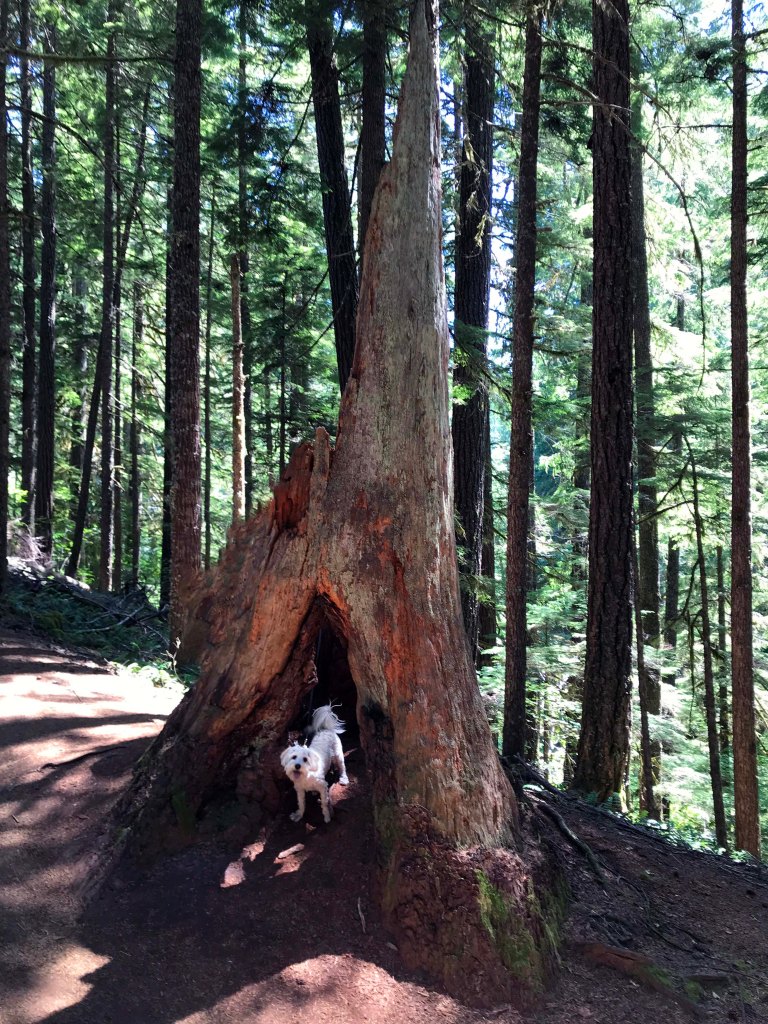 He was also super accommodating about posing for us.

As you can see HUGE tree stumps. 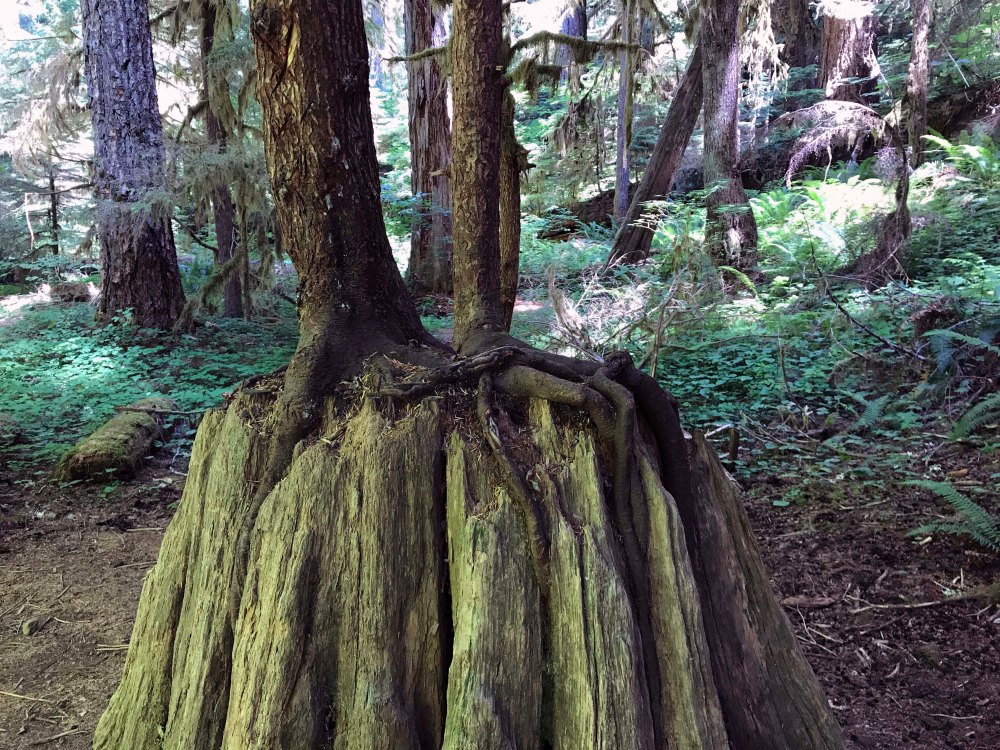 And this amazing couple of trees growing out of a huge old stump. Really neat. 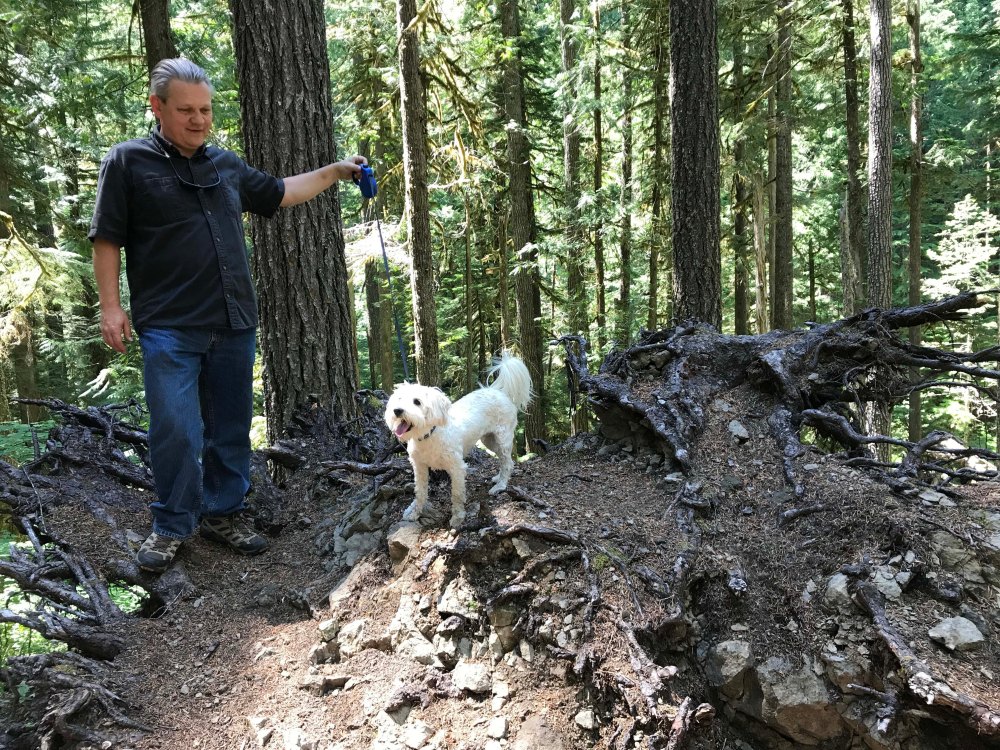 The springs themselves were a bit anti-climatic although we did find them historically interesting. They were discovered in 1880 by an early hunter and prospector named Bob Bagby.  In 1913, Phil Putz, a Forest Service guard, built a cabin that is still present today. A  small fire crew stayed there during the summer months who built a barn, dam, shelters, and bathhouse in the 1920’s.  All of these facilities have disappeared, but the Friends of Bagby volunteers built the current bathing facilities at the hot springs over several years, but due to lack of maintenance they fell into disrepair.  That’s why I was so glad the Forest service was trying to complete some work on it. 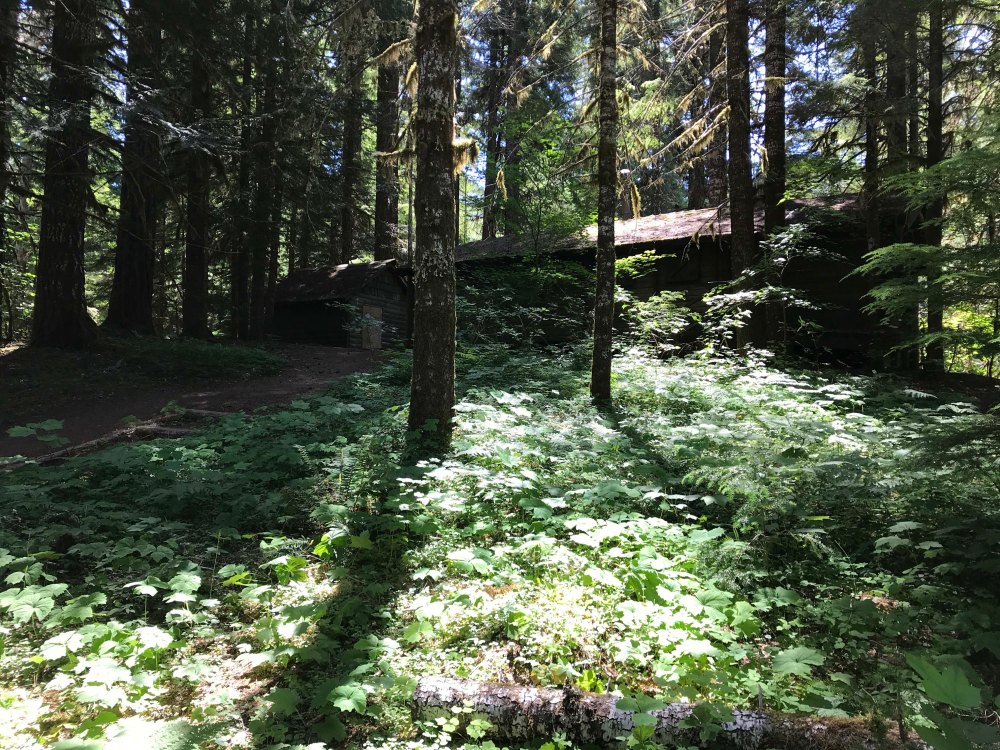 This building is closed 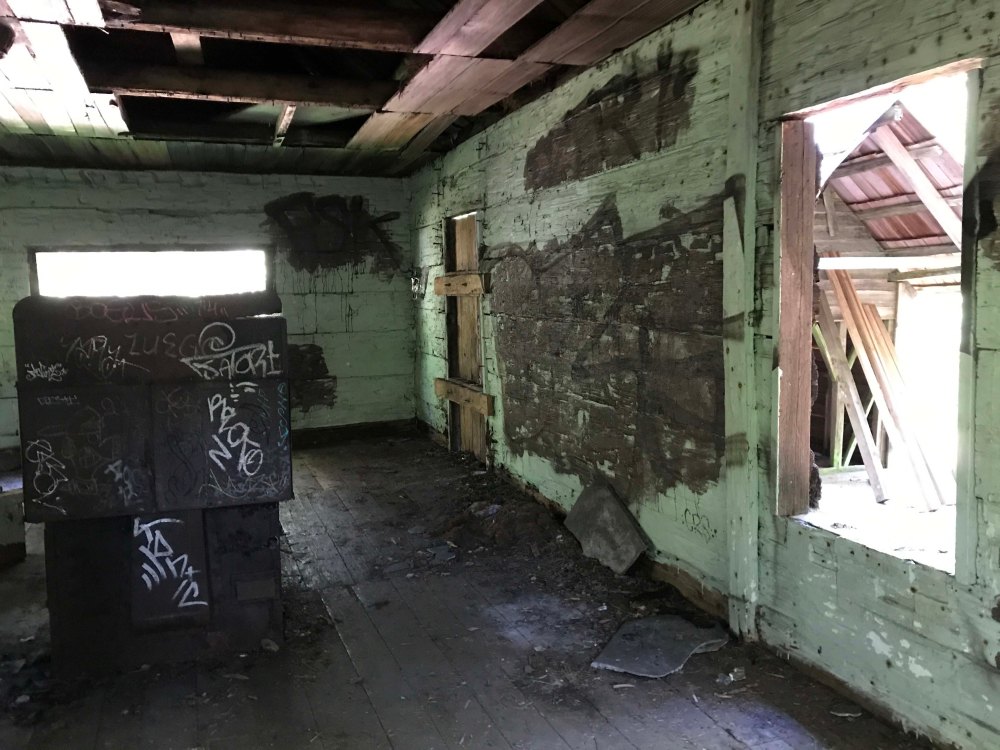 As is this one. You can see how much damage they have taken over the years. “Sketchy” was how this place was described and I agree with the areas that haven’t been renovated yet.

It’s a shame too because you can see how well made these buildings are. 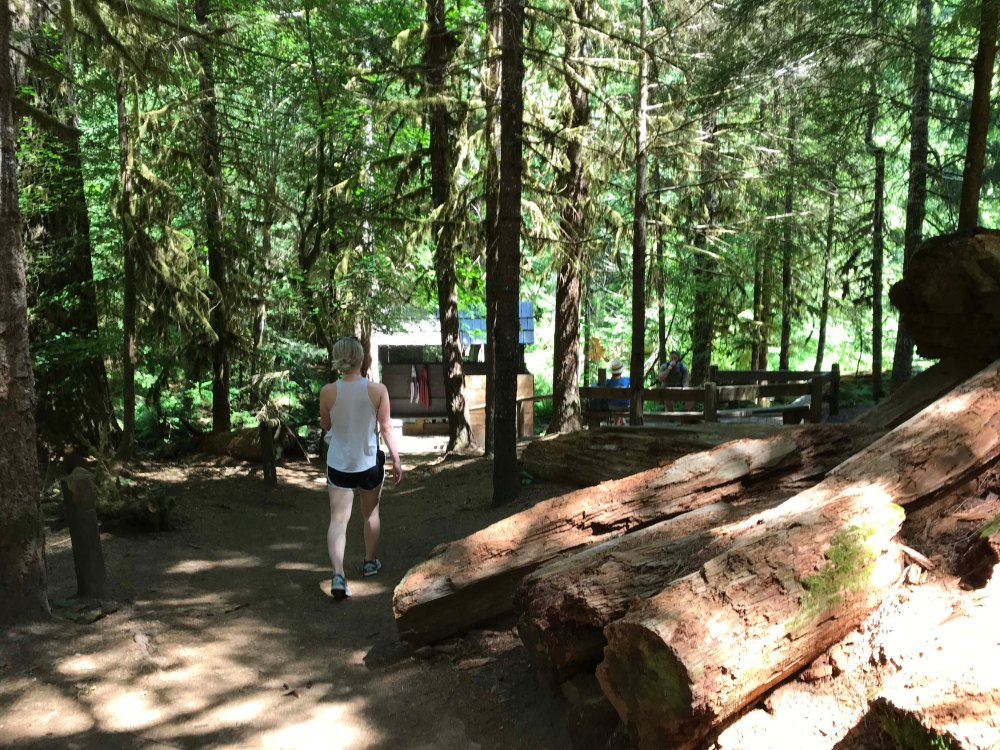 Two of the public bathing areas were reopened. This smaller one had a line of people waiting their turn in the small 4-6 person tub.

The Larger one had several millennials in it and everyone was clothed! 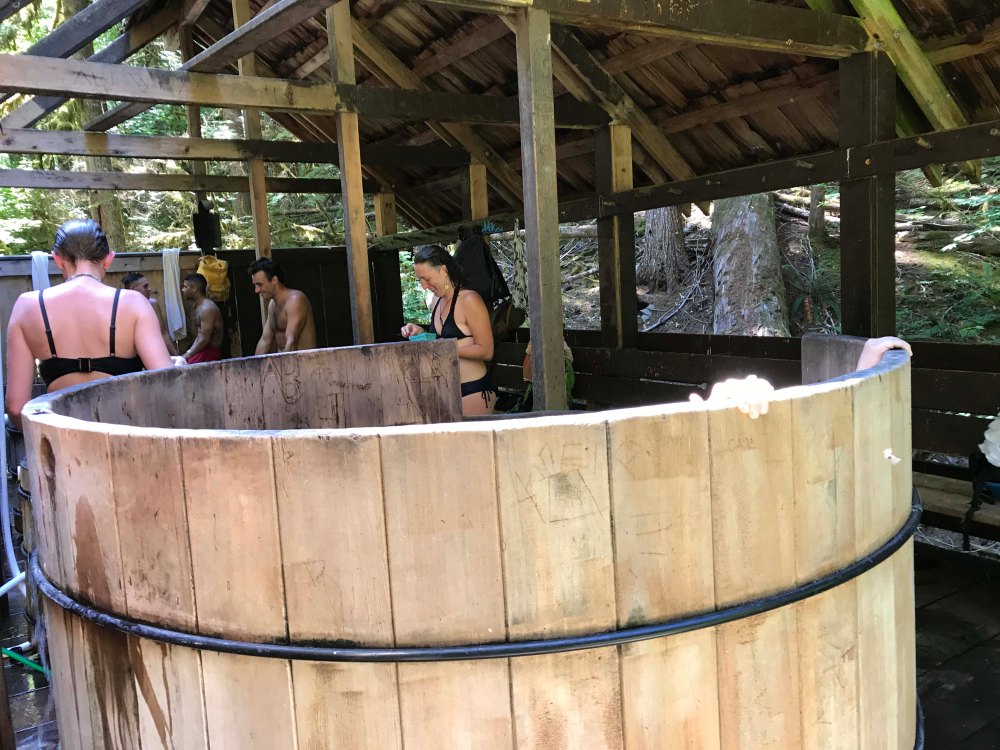 I could have gotten dressed and gone in, but I just didn’t feel comfortable. They were all super friendly though and the girls were even singing a really lovely song I never heard before. The acoustics were amazing in there.

After deciding not to take a soak we walked down and went back to this cool waterfall and pool that was close by.  No one was there and I said I would love to take a dip in that.  Lee went over and found a path down, with a handy rope, and next thing I knew we had this beautiful area all to ourselves.  The water was too cold to jump in, but not too cold for some feet soaking.

Yes the pool was that green.

There were several really cool pockets as well.

Lee and Jack explored upstream of the waterfall. When I wan’t looking Jack jumped in to the water and slid down about 10 feet!

And around the fall

While I chilled by the waterfall.

Really special place and worth the hike.

So even if you don’t care about the springs the hike was great.  Plus you might get lucky and be there when there aren’t any crowds.  We were there on July 4th and it wasn’t that crowded considering.   Either way it was really great to get out and we all needed the exercise.