August 25th was the 100th anniversary of our National Parks system, and since visiting them has been one of the best parts of our new life, we wanted to do something special to celebrate them.  So we changed our days off so we would be available, and weeks ago I had planned to complete the Wrangell-St. Elias trifecta and visit Nabesna Road.  Wrangell-St. Elias is not like most of the other National parks because it is difficult to access.  The park is absolutely huge (larger than Switzerland) and can only be accessed a few ways.  The easiest is to visit the main visitor’s center, get your book stamped, and watch the movie.  From there you can take a short hike that leads to an overlook of the park.  There is absolutely nothing wrong with this approach (I have recommended it to many people this summer) and I did exactly that when Jim and Barb came to visit.  Here’s the post from that day if you are interested, and I really do recommend the movie, it was a good one.

The second way to access the park is via an unpaved road past Chitina where you can go and see the Kennecott Mine. This is much more complicated, and requires some planning, plus a very long drive on a 62 mile unpaved road.  You can stop and turn around much earlier of course, but if you would like to experience the entire trip here is my blog post explaining how we did it.

The third way, however, we had not done yet, and that was to travel the Nabesna road.  This road is off of the Tok cut-off and when we passed it coming into Glennallen I knew I wanted to go back.  I had been saving this experience for today because I though it would be the least crowded of the National Parks in my area.  Well, that was absolutely the case, in no small part because it was unfortunately raining the entire day.  We take drives in the rain and generally have some luck with rain breaks, but not today.  It poured almost the entire way and was actually worse when we got into the park.

I have to say at this point that my husband really loves me. Driving the Tok-cutoff, which is still pretty torn up even though they have been working on it all summer, is not fun, and then driving down a muddy road after that was not much better.  Still, he knew how important this was to me and was totally game.

One of the best parts of the day was the small visitor’s center at the beginning of the road.  It was a tiny one, with minimal staff, but I really liked it.  Tiffany was on duty and she was great.  She shared with us that she had moved to the area when she was 7 years old with her parents who took advantage of one of the last homesteading opportunities in the US.  It was even more impressive when we learned that of the 400 claims that had originally been staked in 1984, only 50 people were left.  Not only had her family succeeded where so many others had failed (-60 degree temps and poor farmland were the major cause), but she had grown up to work in our parks service,  very cool.  I liked the visitors center so much that I splurged and bought a T-Shirt there.  The design was made by local natives and I really liked it, plus Tiffany gave us a free CD that we could listen to in the truck while we were driving the road. 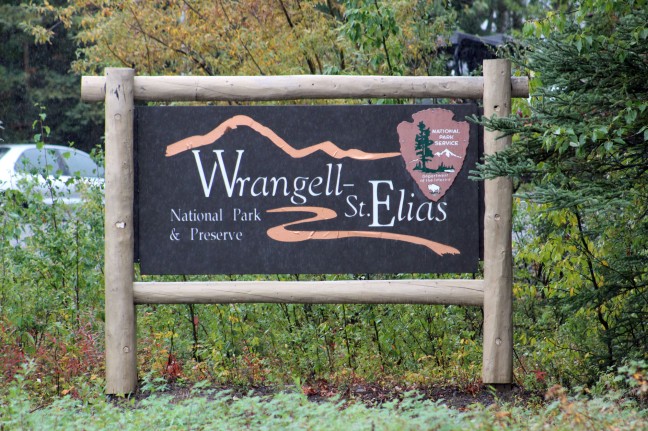 So off we went, with some warnings as to which point 4-wheel drive was recommended, listening to the CD as we went. It was a very interesting CD, but we had to laugh when they talked about the views, since by this time it was really raining and we couldn’t see anything.  Lee was a trooper though, and we continued on despite the road getting worse and worse.

The road before it got really bad 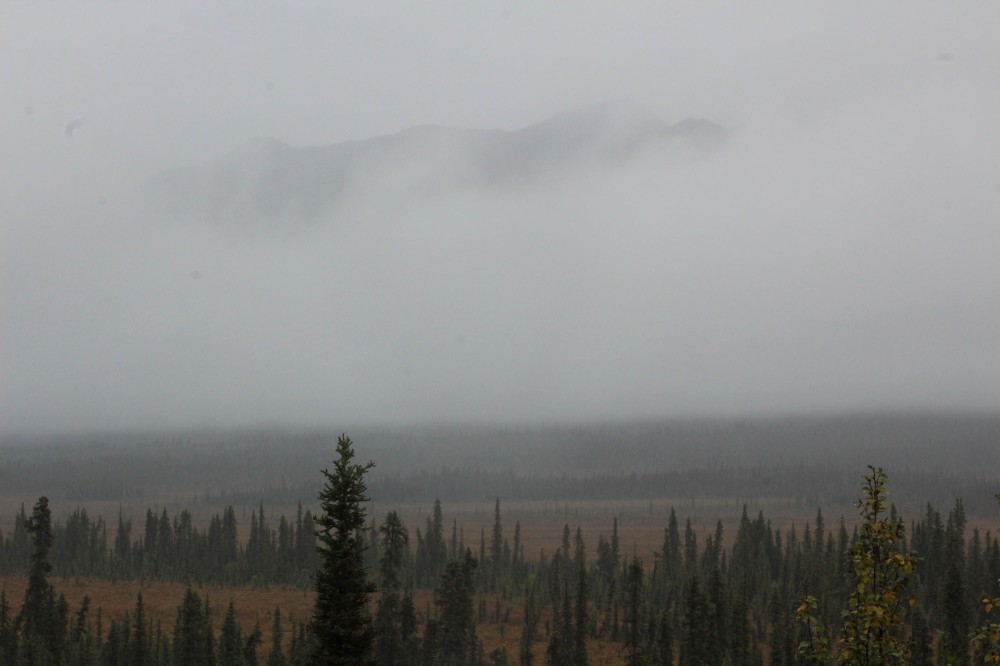 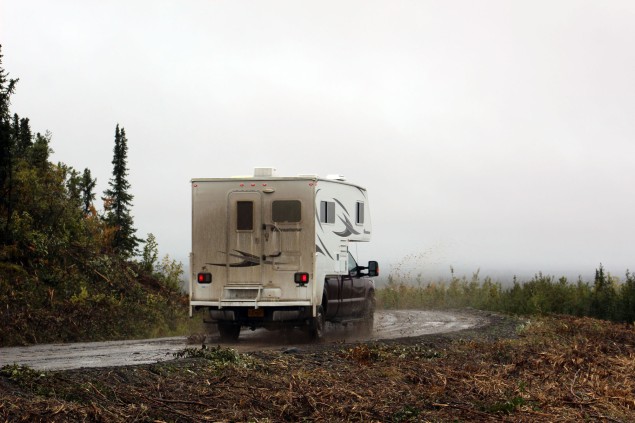 Wanted to show the mud 🙂

The road was practically deserted though, and I was hoping we would see animals, but it is active moose season and the park allows subsistence hunting.  So we didn’t see any mammals of any kind, but we did get to see two new birds which was really cool.

Rock Ptarmigan along the road 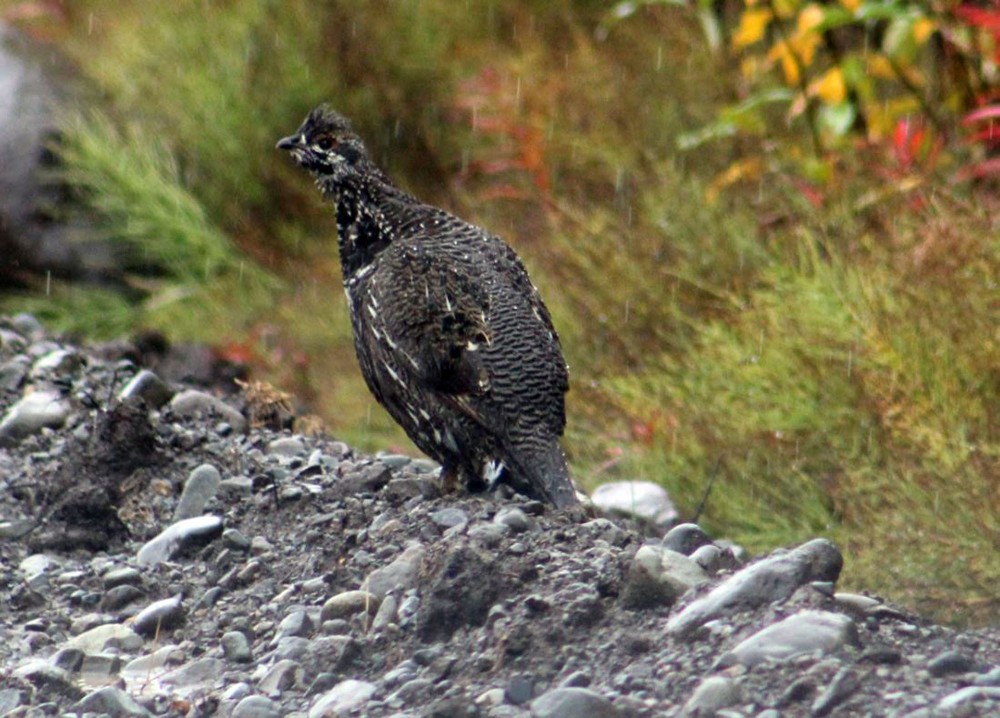 As you can see, it was raining, so the rest of my pictures I actually had to take with an umbrella over me,  and because we were getting worried about the condition of the road we only went down to MM 21 (the road goes 42 miles) and saw the campground and then turned around.  The Kendesnii campground was really nice, and if we ever come back to Alaska in a smaller rig I would love to stay there.  It sat on two lakes and had a really nice walking path along them which I went a short ways on to get a few pictures.  There was a family of trumpeter swans on the lakes and I bet it is absolutely stunning when there are mountain views.

On the way back the rain even slowed a bit and we got a break in the clouds to catch a glimpse of the surrounding mountains.

So it wasn’t the perfect day, but that’s alright because it was wild and vast even in the rain, and I have definitely put it on my list of places to come back to on a clear day.  The most important thing was that we were together and in a National Park on the anniversary and that in and of itself made it special.  I can’t even imagine taking a Thursday off to visit a park in my old life.

Oh, and of course Friday was a beautifully sunny day and we had to work.  Ah well, sometimes that’s just the way things shake out.