As a general rule I am not a huge fan of the first week of the New Year.  There is too much pressure on making resolutions, which I am not a huge fan of, and it’s also the time when people (news outlets) complete a retrospective on the closing year.  In general I am a person who likes to look forward, so I am not a big fan of that, and for 2020 in particular the retrospective is pretty depressing.  Personally I think Lee and I did the best we could with the information we had, and thankfully to the best of our knowledge we managed to avoid COVID.  This is no small feat considering how much travel we managed to squeeze in this year and some of that is due to luck, but it is also due to the extreme precautions we have taken.

Maybe because of the year, or maybe not, we actually made a joint resolution this year.  We were watching a morning show and heard about picking one day a week as a “non-spend day”.  It sounded interesting and since our costs have been steadily going up we decided to give it a try.  We picked Monday, and its too early to tell if this will have any impact at all on our overall spending, but its an interesting experiment.

I also committed to finding a cheaper solution for my e-cigarettes.  I was surprised to learn I spent more last year than both of us were spending previously on real cigarettes, and am attempting to switch from cartridges (which are expensive and sometimes difficult to find) to Vape juice. The added benefit of switching also adds “friction” to the system.  I listened to a really good NPR story about breaking habits and they have done scientific studies to show adding friction matters.  Their example was people whose gym is less than 3 miles away go 5 times a month, where people who have to travel 5 or more mile only go 1 time a month.  Essentially, people are kind of lazy, and if you make things harder they are less likely to do it.  I certainly resemble that remark, so having to fill a vape pod manually adds friction to the system, which will hopefully help me quit over time.

All of those types of thing paled in comparison to the upcoming layoffs at my job.  One of the negatives of corporate work versus work-kamping is layoffs and restructuring are pretty common.  It was general knowledge that COVID was continuing to impact our business and right after the holidays is a pretty common time for changes to be made.  Normally in these circumstances I assess my position in my group (based on what my boss values) and I have a general idea of whether my number will come up depending on how deep the cuts go.  Unfortunately in my particular group there has been a ton of turmoil over the last several months and I really had no idea where I stood.

In situations like this our lifestyle can really help us.  Having proven to ourselves we can live on far less money makes keeping my job less of an imperative than it would have been as a home owner, and we are truly mobile which means I can look for work anywhere.  The only downside is depending on who I am working for there may be a bias against all my travel.  Although I am getting better at explaining the lifestyle to my bosses, it takes time to prove to them that it really won’t impact my productivity.  As I often say, you shouldn’t notice anything other than a different view from my window, but that’s easier to say and takes some time to prove.  I am currently presenting the situation as a fact rather than an ask which has helped lower my stress rate quite a bit.  Since I was hired in with this understanding and we all work remote anyway to this point those conversations have gone well.  An unspoken bias against the travel could exist though, which might put me higher on a list of people to lay off.  I really have no way of knowing.

So that was my situation on Weds, when word started trickling in that people in my group were being let go.  After a few tense hours it became clear that the management team were the only people directly impacted and I called Lee to let him know.  His response was “have you turned on the television?” and that’s how I found out about the people being in the capital building.  Normally we don’t have TV in places we are staying, so I never have it on, and I was shocked when I saw the images.  I have to say at that point my brain just sort of shut down.  I have very strong feelings about what happened in the Capital, but I was also talking to people I cared about who had suddenly found themselves out of a job.  Since there wasn’t anything I could do about DC I focused on the people closest to me, and it took a couple of days for what happened in DC to really sink in.

As someone who for the first time in her life participated in a peaceful protest this year, I was horrified by what I saw.  I will also say that when we marched to the Supreme Court building we couldn’t get anywhere close to the doors and we were largely a group of middle aged women.  That being said, there was no way the police could have kept us out if we really wanted to because there were so many of us and few of them.  What stopped us?  Patriotism. 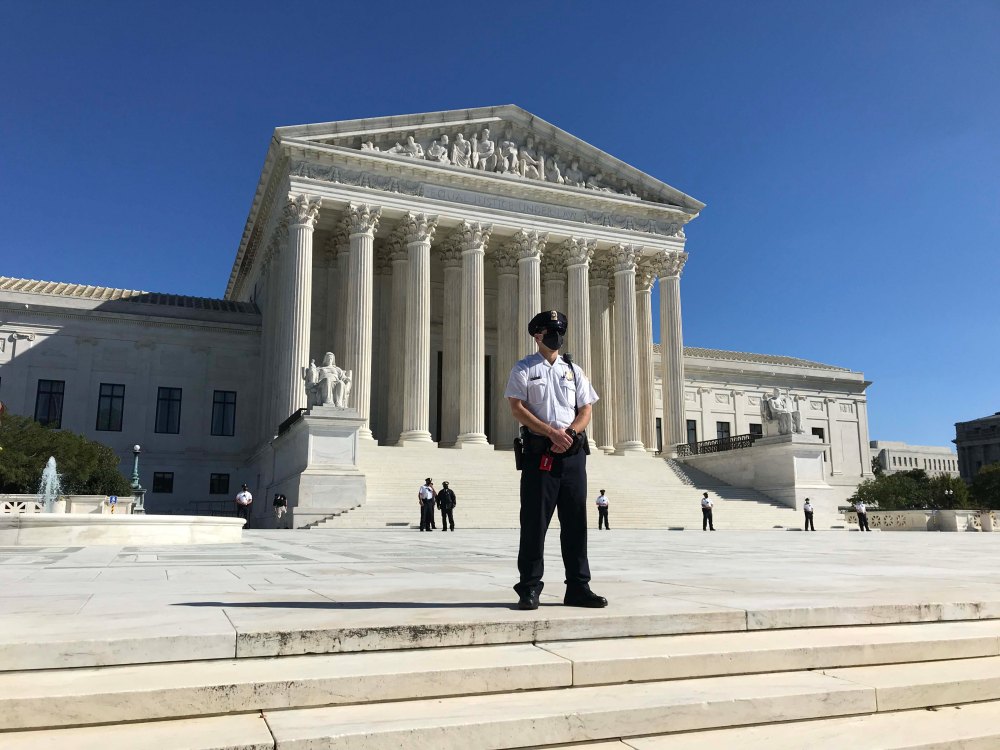 This is what it looked like when we approached the Supreme Court.  They wouldn’t let us anywhere close. 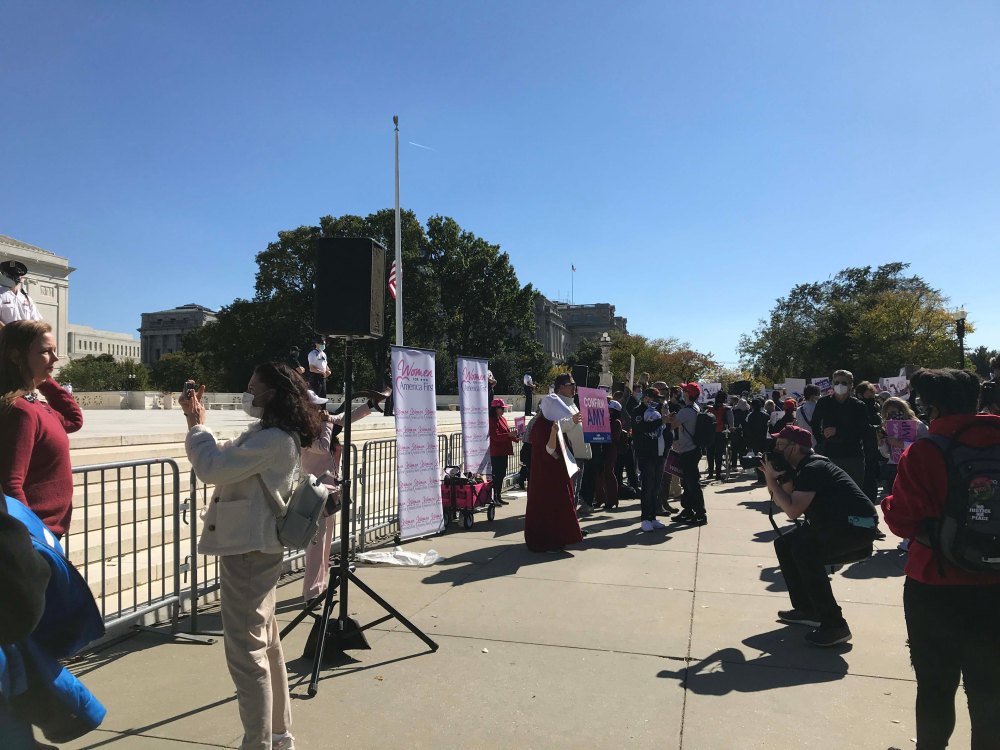 We certainly had enough people to push through this barrier.  Instead we peacefully protested outside it. 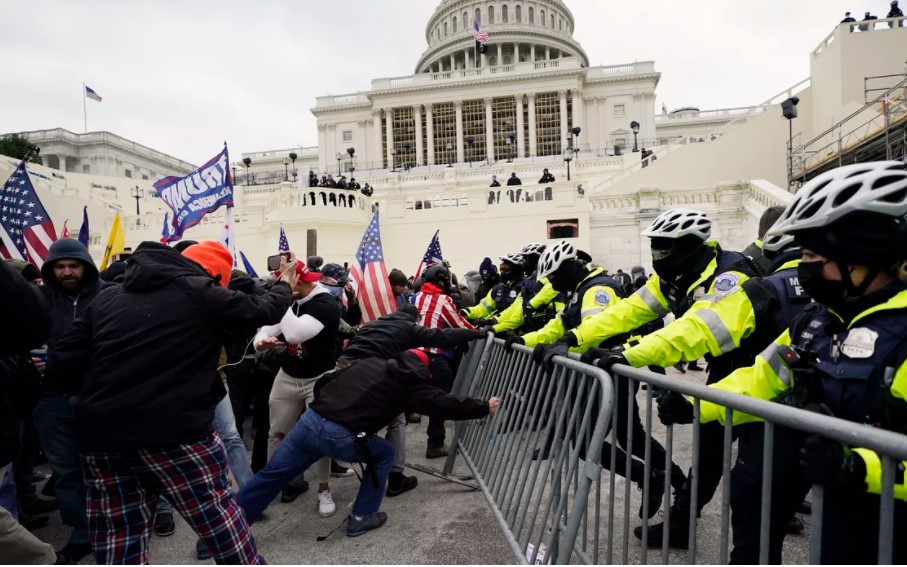 I am going to leave it at that.  I am grateful I still have a job.  I am saddened and disgusted by what I saw on Wednesday, and I fervently hope that 2021 is better than 2020 for all of us.

7 thoughts on “An Unsettling Week”