I wish I had something else to write about, but it seems that all aspects of my life right now are colored by the virus.  I know I am not alone in this, but since I write about what’s on my mind and I am not sleeping well I thought I would spend some time sharing my thoughts.  Almost every day I wake up and spend some time in the morning looking at the data.  People get their news from a variety of sources but looking at the numbers grounds me.

Despite assurances by multiple sources that we have turned a corner the data still scares me.  The most credible source I use is Johns Hopkins. It is not the friendliest view for sure but I trust the data and they have added some new pages including critical trends.  I don’t spend much time comparing us to other countries, mainly because I don’t trust their reporting, but I do look at areas of the country where I have friends and family and see how things are going there.  I can also see the mortality rate, which is a key statistic for me, because at the end of the day what matters the most is how many people die. Currently we are at 8.66 deaths per 100,000 people which in the grand scheme of things doesn’t look that bad.

But then I dig a little deeper.  I look at a dashboard that a person in Seattle has run since the beginning and look at the overview. 2M confirmed cases worldwide, 135K confirmed deaths, and 28,554 deaths in the US alone.  I like trends though so I check out the NBC graphs that show the number of US cases per day.    Yesterday we had 30,000 cases, which is down from the high of 35,000 cases but when you look at their curve it looks like this.  Definitely not flat. 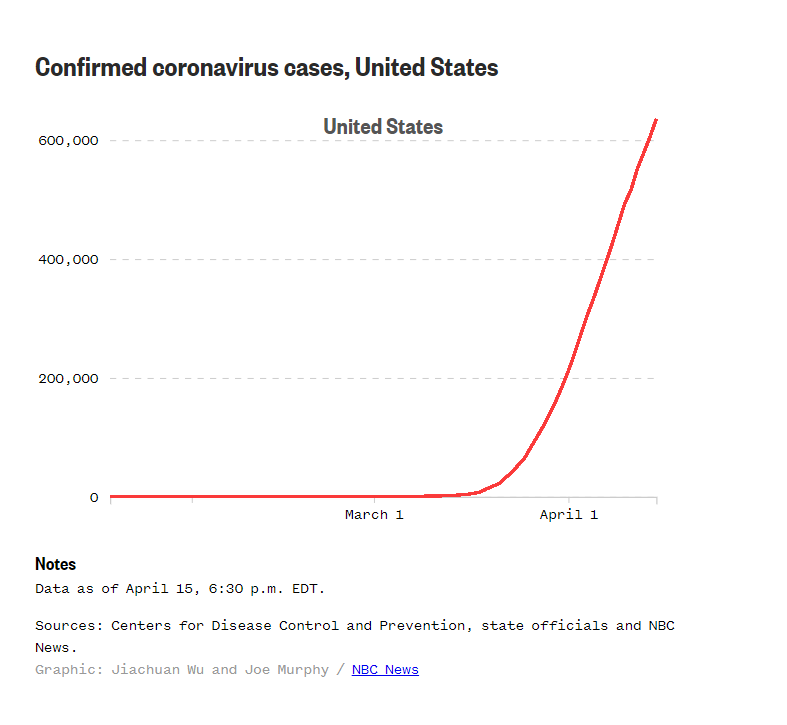 That’s the big question really.  Have we flattened the curve?  I watch the briefings almost every night and he and the experts talk about we have flattened the curve.  They used projections from this website and again I have no reason to not find it credible.  But the pictures don’t match.

According to this site the peak is over and as a nation we are starting in the downward trend.  That supposes stay in place measures are happening, but so far it seems pretty accurate.  When the president talks about each state’s reaction and the differences he is using this data.  For example Texas, with its rural areas and dispersed populations is doing pretty well so far, but it’s peak isn’t estimated to be for another  14  days.

Even though it isn’t for another 14 days the projected death toll per day is relatively low.  At peak it is 71 deaths per day, which in a state as large as Texas is objectively not that high.  As conversations ramp up around getting the country back to work, believe me I understand the need for folks to get back to normalcy.  We are spending trillions of dollars to keep some money flowing to people, but even with those additional funds, individual people will start getting desperate soon, if they aren’t already there.  The question then becomes do we accept the deaths (and perhaps more) by lifting the stay at home measures or do we hope we have passed the peak in enough areas and roll the dice.

As a person who likes to work and was raised to be a productive member of society I want everyone back to work as quickly as possible.  That’s not about my individual 401K portfolio, or my loss of income from partial furlough, but about understanding that the long term impacts of being out of work for some people could last for years.  Unfortunately those desires are at war with the reality of what I am seeing on the ground.

I personally know many people in our healthcare communities, and when I reach out to them they are still telling me that they don’t have access to basic protective equipment.  For example a daughter of a friend works in trauma at a hospital and is forced to wear the same gown and face protection all day.  Before Corona they changed gowns between every patient , but there still aren’t enough supplies for them to do that.  I know a doctor who was exposed (through no fault of their own the patient lied about having symptoms) and doesn’t have access to a test.  In many parts of the country if you are asymptomatic you simply cannot get a test unless you have had a fever for two days.

In addition to the healthcare situation, we still continue to see hot spots bubble up.  In the last few days we have seen that they are putting bodies in refrigerated trucks in Detroit and they closed down a pork processing plant in Sioux Falls, SD because of 300 cases.  Those are just the examples that made the news. With examples like those it doesn’t seem like the danger has passed, although I can allow for the possibility that they are isolated cases.

Except personally I really don’t believe that.  We are a country that takes our personal freedoms very seriously, and I can’t believe that if we lift restrictions folks are just going to stay in one area and keep to themselves.  Airline travel will start up again, and even if we don’t allow folks from the outside into the US we have plenty of opportunities to cross contaminate ourselves.  I personally have numerous business trips that have been delayed due to corona and have to believe as soon as the bans are lifted I will be back to flying.

Then there is Lee.  He has a summer job he is really looking forward to at Crazy Horse Memorial  in South Dakota.  At first glance this seems like a great place to be, but they are expecting record crowds this summer despite delaying their opening until Memorial Day.  Since few people will vacation internationally, they will likely vacation in the US and just like after 9-11 our National Parks and Memorials will probably see record crowds.  Since Lee is doing lighting at the show this might not be a bad thing, but in order to get his 40 hours he will also spend some time each day taking tickets.  The memorial gets one million visitors per year (most in the summer) which means Lee will be coming into contact with thousands(?) of people each day.

These folks will be from all over the country and I have to believe some of them will be carrying the virus.  No matter what protections are provided, and they will probably be minimal, chances are he could contract it.  But even if he did only 8 out of 100K die, so those are pretty decent odds right?  Maybe, but at least in our case we have a choice.  For now at least I have a job that pays our bills so he doesn’t have to work this summer.  Or he could try and find a less risky job somewhere else.  We are lucky in that respect at least for now, but I am fully aware that this is not the case for many Americans.

As much as we are about choice and individual freedoms, there is precious little of that when you have bills to pay and kids to feed.  Despite any reservations many people might have they will be driven back to work by necessity. The immediate concerns of making rent and putting food on the table will fully outweigh the outside possibility of getting sick.  Those of us who have jobs where we can work from home will continue to do so for awhile, but eventually the pressures of the need for business travel will outweigh our concerns as well. We will travel, we will expose ourselves and others, and perhaps will we see more hot spots bubble up over the summer.

The problem is we simply don’t know and we don’t live in a perfect world were we can reasonably say with certainty what will happen.  Personally I would feel a lot better if the antibody test was widespread, but even when it is what will that solve?  Will people who have never had the virus expose themselves under controlled conditions, like we did with the chicken pox?  Would businesses understand that there is one set of rules for those with the antibodies and those without?  Doubtful.

There will be risk in the upcoming months regardless of what we do.  Best case scenario you have the disease and didn’t even know it and are carrying the antibodies right now. For us, since we have some choice, we need to talk about what we want to do.  How much risk do we want to accept? When will I be willing to get a haircut, walk into a crowded store, or get on an airplane?  To some extent life will make those choices for me.  The pressure to normalize will be very great, and it will be harder and harder to push back against those forces.  We are already seeing that and when they start opening things back up it will be much worse.

As always, we will let you know.

10 thoughts on “Covid – Playing the Odds”