After Oklahoma City, I felt pretty pooped out.  I wanted to get down to San Antonio and just sit in one place for awhile so we headed straight there.  I did look along the route for anything interesting we might stop and see, but there wasn’t much except this funky little shop called the Cloverleaf.  Once again it was a tough place to fit our rig in but Lee managed and I am glad he did.  The shop is going out of business, and it was nice we got to see it before it closed.  It has an eclectic mix of all kinds of things and personally I have never been in a store like it.  It’s impossible to explain with words so let me just show you. 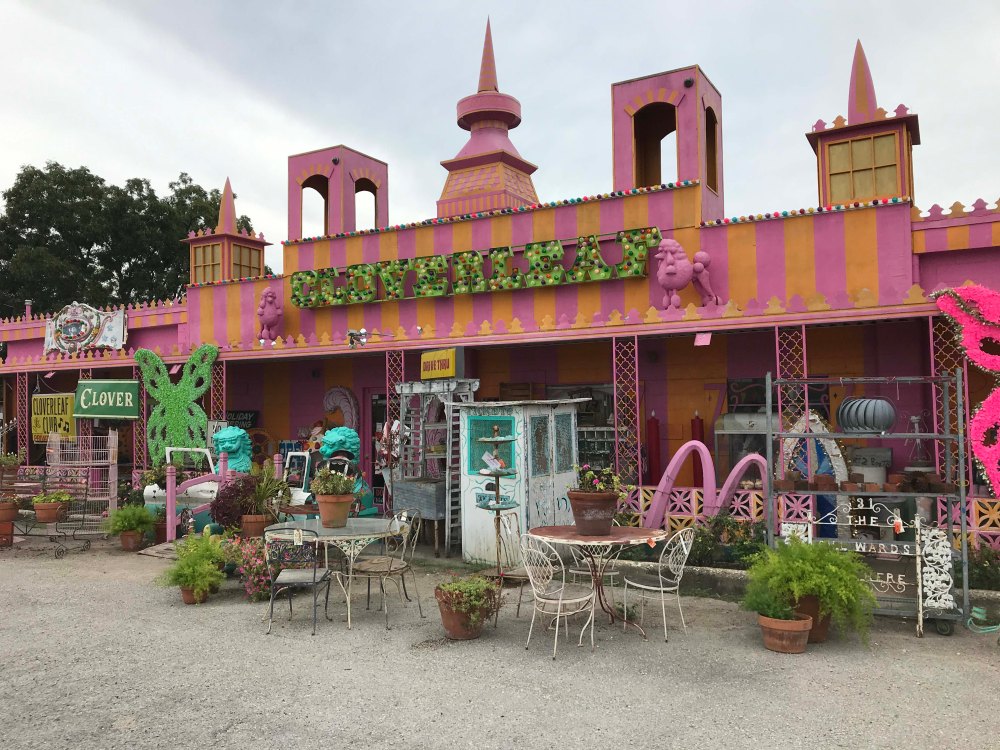 There was a whole lot of pink!

The painted bikes used as a boundary were cool. 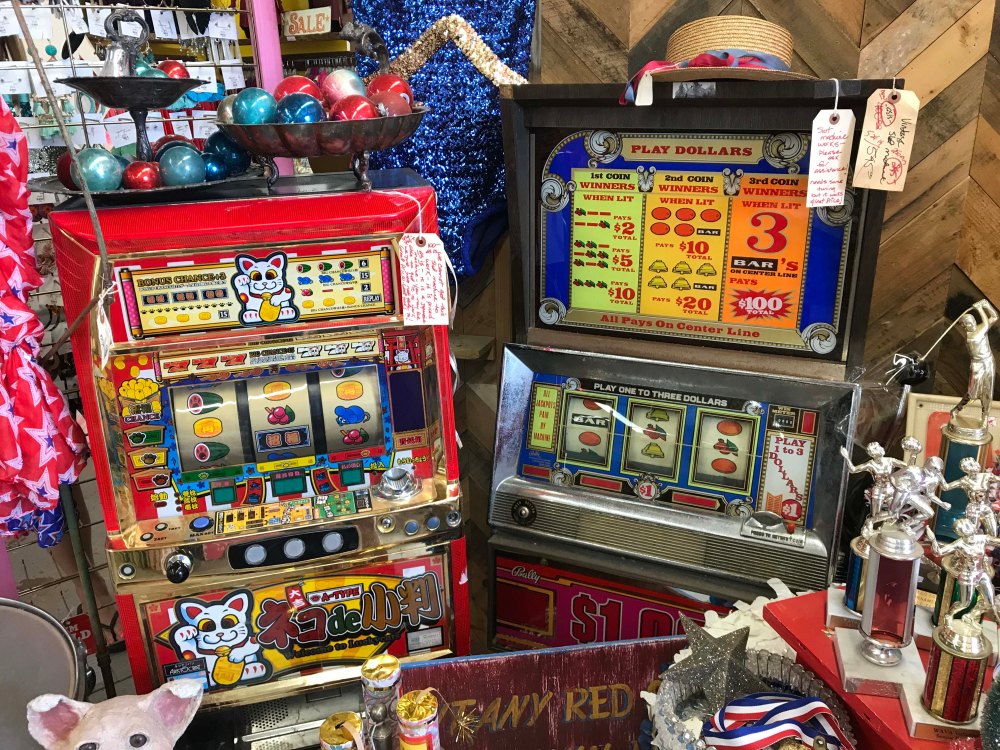 The outside was the most interesting part.  Several sheds just crammed full of all kinds of weird stuff.

Some of the sheds 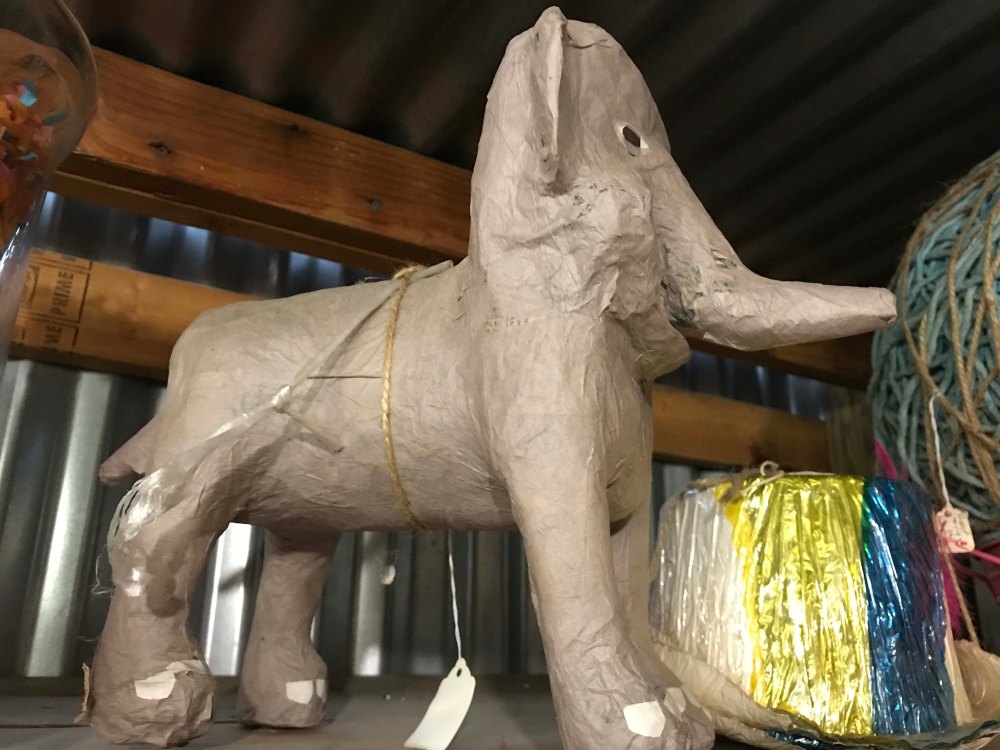 This guy was weird

We actually owned one of these we got from Lee’s mom. Kept it for years and thought it was one of a kind. Apparently not 🙂 It’s a ball made of plastic drink cups that are glued together, and each one has a hole in the bottom. In the cavity that’s the center of the ball, there is a wad of Christmas lights and there is a light poked through the hole in each cup. Then there’s a controller box on the cord that gives you a bunch of different chases and patterns in the lights. Very cool looking when it’s hung up and the lights are on.

You see these signs all the time, but in this case it was absolutely needed 🙂

Since there wasn’t much to see along the way, I thought I would try and find us a cool place to stay overnight.  After doing some research I found what looked like a great Corps of Engineers park along a lake outside of Waco.  That seemed perfect and since it was mid week, we pulled in without making a reservation.  The gentleman who checked us in seemed annoyed by that, especially because he had to put our information in the system.  By this point it was super hot and we were looking forward to pulling into our spot.  Initially the site seemed nice, with great views and I was excited about taking Jack down to the lake.

The covered patio was nice

Jack loves sand and I was excited about letting him run along the shore, but someone had left a dead fish laying out and he kept wanting to eat it.

I tried to walk him the other way, but these sites were pretty beat up. There were concrete blocks with rebar laying around and you really had to watch where you stepped.

The worst part was everyplace we walked off the pavement there were an insane amount of burrs and “stickers”.  I understand that there is little they could do about it, but it ruined the experience for Jack and myself.  Oh and did I mention the planes?  When I saw how close it was to the airport I didn’t think much of it, because I figured it would all be small planes.  Nope.  Twice while we were there large planes landed and it was so close to us the RV shook.  It was really loud.  Combine all that and it was by far the worst COE park we have ever stayed in and at $30 a night it wasn’t cheap for water and electric.  The one plus was a beautiful sunset. 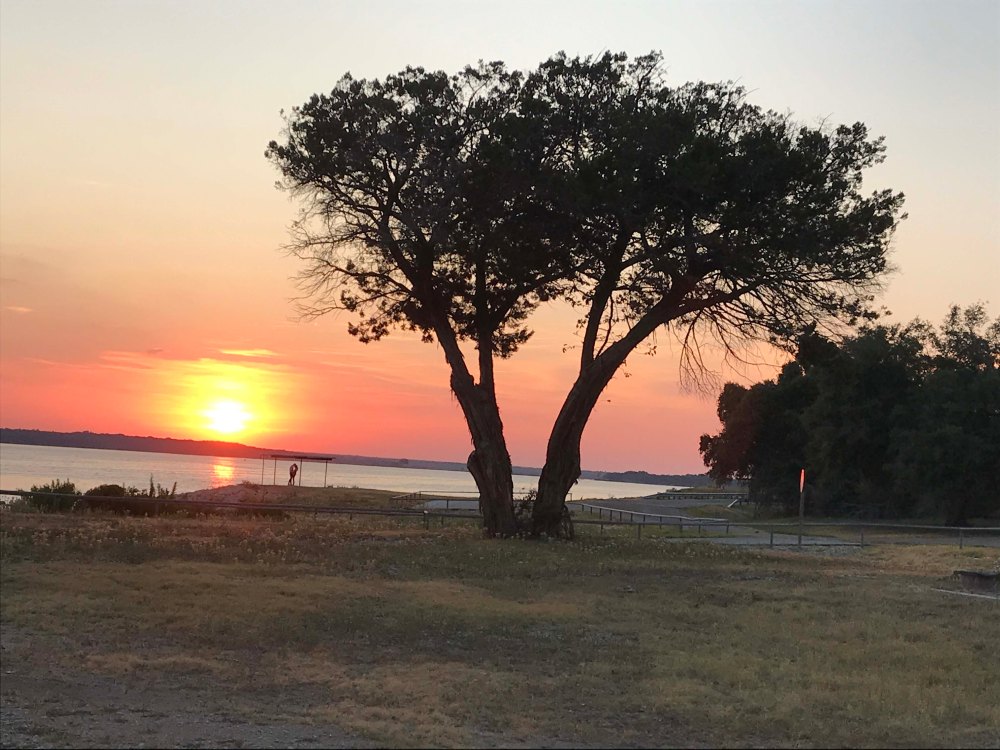 The next day we were both pretty cranky and really happy when we arrived at our final destination.  We are staying with friends, which will be nice for the wallet. and as I said happy to be taking a break.  We took the weekend to just chill and then on Monday Lee called several gate guard companies and got put on their waiting lists.  Things are somewhat slow again in the oilfields so we don’t know how long we will have to wait.  I am fine with that because I have several interviews lined up for this week.  Plus with temperatures hitting 100 every day, I am not complaining that we can stay inside our RV and don’t have to work outside.  We need the money, but I am hoping that something will come through on one of these jobs and we won’t have to gate guard at all.

More on that in the next post, but we are here in San Antonio and all is well!