We have actually driven through some of Kansas before this trip, but because we didn’t stop and do anything Kansas specific we still needed to earn our sticker.  I knew we weren’t going to spend a ton of time in Kansas, but we decided to take a route that was off the interstate to allow for a few interesting stops.  The first thing Lee and I did was check our Roadside America app and see what was available along any of the numerous routes we could take.  Once we planned our stops we let the GPS lead us.  Since Kansas’ highway system is laid out in a grid, there really are numerous ways we could have gone.

The first stop was the small cabin where the creator of Home on the Range “the Kansas State song” lived.  He actually wrote the song when he was living in a hole in the ground, but built the cabin the next year. To get there we had to drive down a long gravel road and I’ll be honest I was pretty nervous.  You couldn’t see the site from the road before committing to the turn. (This picture is what you see as you approach the site. Not much info to go on. The turn is just after that small frame sign on the right, and the little gravel area you see just before the sign doesn’t go anywhere, and isn’t big enough to turn around. – Lee) 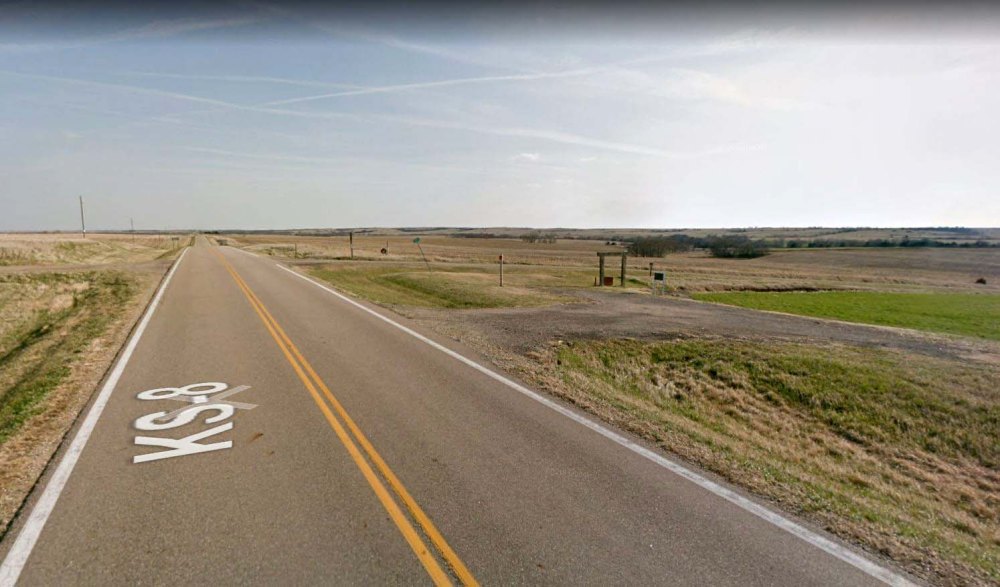 Thankfully the road was fine and the turnaround was pretty great.  It was a well-maintained site in the middle of nowhere that has a pretty interesting story.  And best of all the driveway was a loop and we got in and out just fine. (In the picture below you can see the entire area, with the highway and entrance on the right, and the cabin and house area on the left in the upper left corner. . – Lee)

(In the second picture you can see the area with the loop. We could only see the modern buildings from the road, and I thought they might be someone’s house, and I figure worst case scenario I could turn around at their driveway. As it turned out, there was ample space to drive around that loop. The modern buildings were the home and garage/barn of the couple who lived there.  – Lee)

The only signpost at the road

The reason the site was in such a remote location was the couple turned down several offers to relocate the cabin and instead donated the proceeds from renting the farmland upon their death to the maintenance of the location.  They believed strongly that historical locations should be free and instead of cashing in, lived frugally their entire lives and had the location made into an historical site upon their deaths. I’m not sure I would have made the same choice (mainly because the cabin is in such a remote location) but I certainly admire it.

The cabin itself was very small and there was nothing particularly special about it.  It was a nice opportunity for Jack to get outside a bit though and we also enjoy getting off the beaten path.  I definitely would not recommend going out of your way, but if you are passing by (which is highly unlikely), its worth a quick stop.

After the Home on the Range stop we were headed towards our main goal, but along the way, just a few miles farther down the road, was yet another cool thing to stop and see! Back in 1950, for their 50th anniversary the Boy Scouts of America decided to put miniature statues of liberty all over the country. There are over 200, and of those 25 are in Kansas alone. Since it’s incredibly easy to stop at, we decided to grab a few pictures. As you can see, the spur road is plenty wide and long enough for LOTS of big rigs. 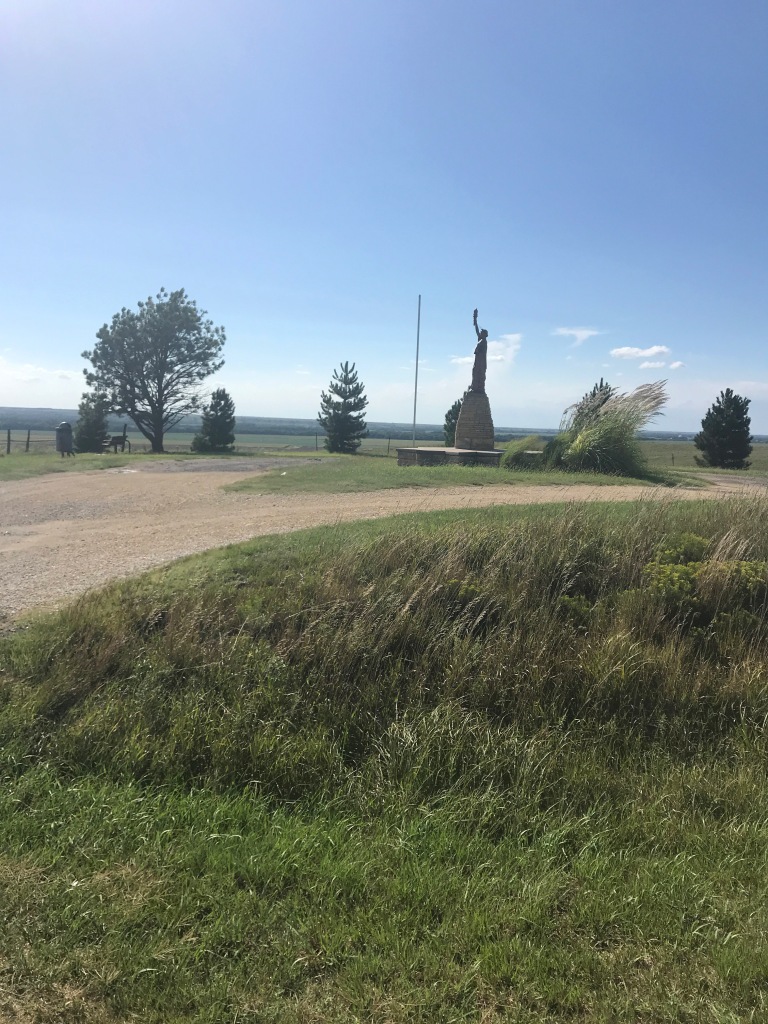 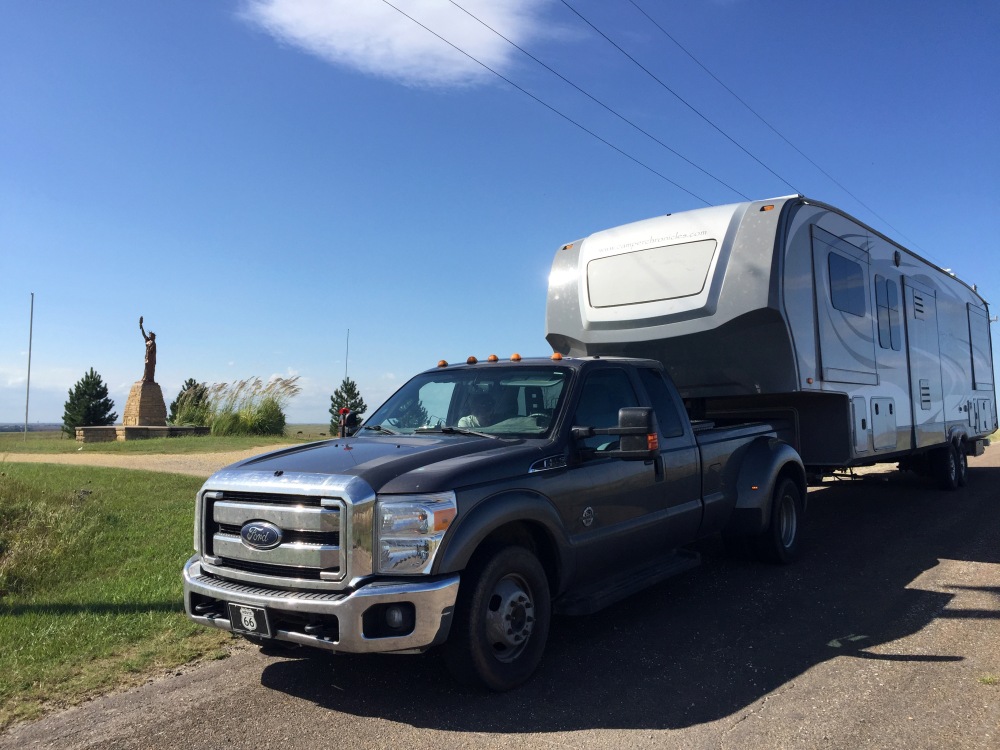 Jack with his best majestic face

And finally, on to the big event! More than five years ago our love of the quirky roadside attraction started with Fork in the Road.  We stumbled across it on one of our early camping trips and I absolutely loved it. 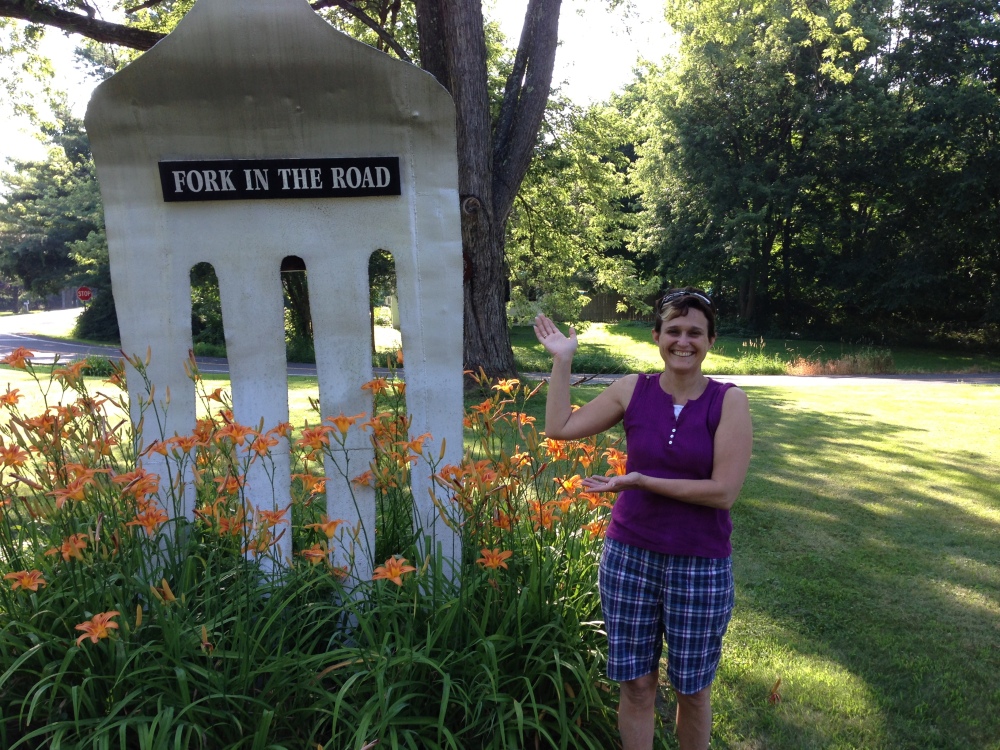 Since then when we talked about seeing the quirky and unusual we always short hand our description by saying giant Fork in the Road or Worlds Largest Ball of String.  Unfortunately the largest balls of string aren’t that easy to find.  Yes, there are several of them, and it never really mattered to me which one we saw, but they all seem to be in out of the way places.  So when I saw that there was The Worlds Largest Ball of Sisal Twine in Cawker City, Kansas I was willing to go out of my way to see it!  Thankfully Lee agreed.  Luckily the attraction was right downtown and we were able to park right on the street.  Look I know it’s totally goofy, but it felt like a victory to us and was more than worth the side trip. (As you can see in the picture, plenty of on street parking, just take up as many of those spaces as you need. – Lee)

Jack wasn’t that impressed but what does he know 🙂 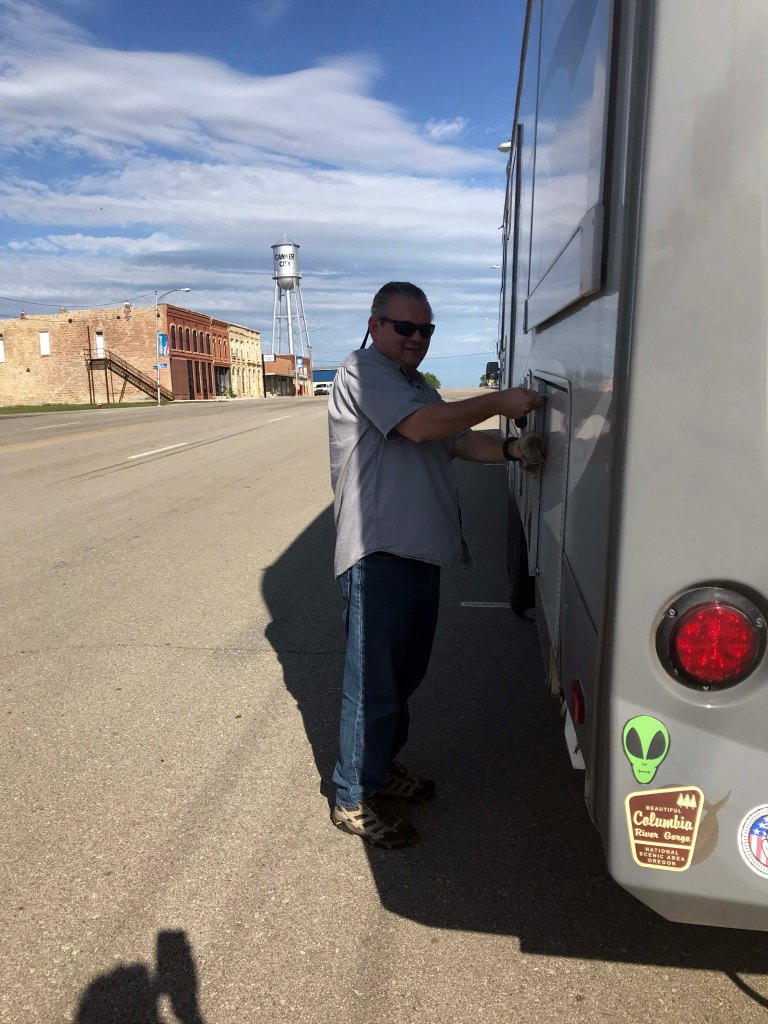 While I was checking it out Lee left and went back to the rig where he pulled out a bundle of sisal twine!! Who has this in their rig…well us of course..and since it was the approved kind I was able to add it to the bundle. 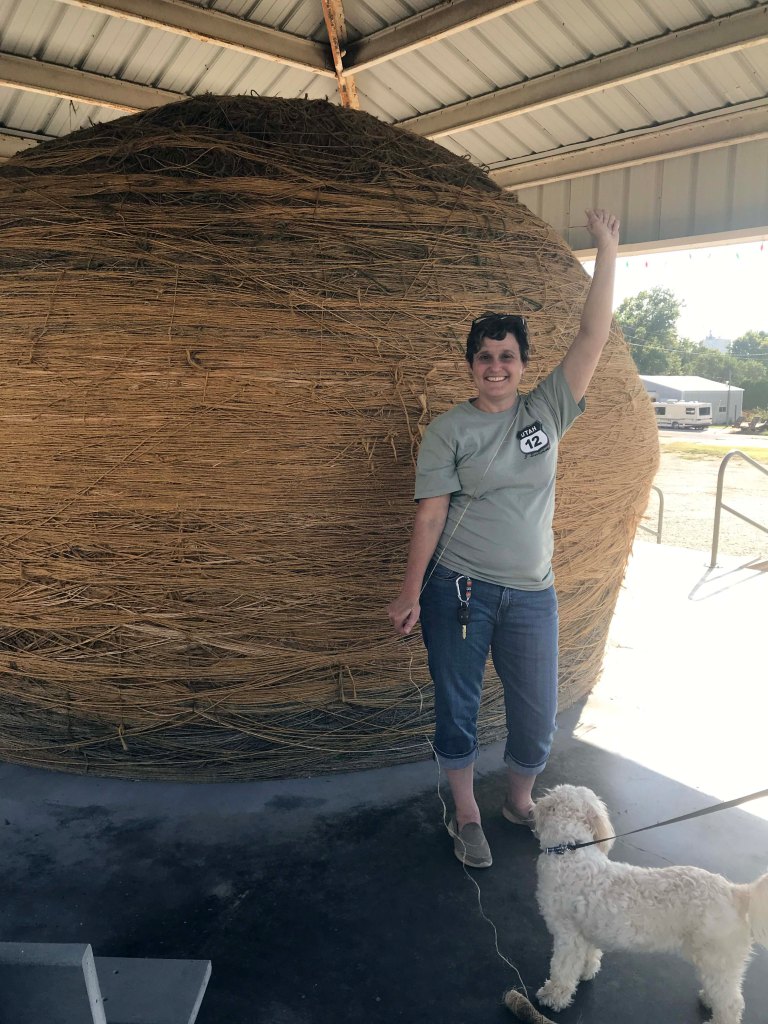 Any other kind of string they remove, but I had the right stuff!!

A little older and a little wiser but we made it!

The best part of getting off the beaten track was when we discovered this great state campground near the ball of twine.  Glen Elder State Park was really special.  We had a fantastic site that backed up to a beautiful view of the lake and I was completely surprised in the morning when a flight of five pelicans went by.  Pelicans in Kansas who knew! Jack absolutely loved it and even though it was humid and we only had 30 amp (so could only use one AC) it was lovely.

View from our back window

The grass was great and Jack had a wonderful time playing in it. 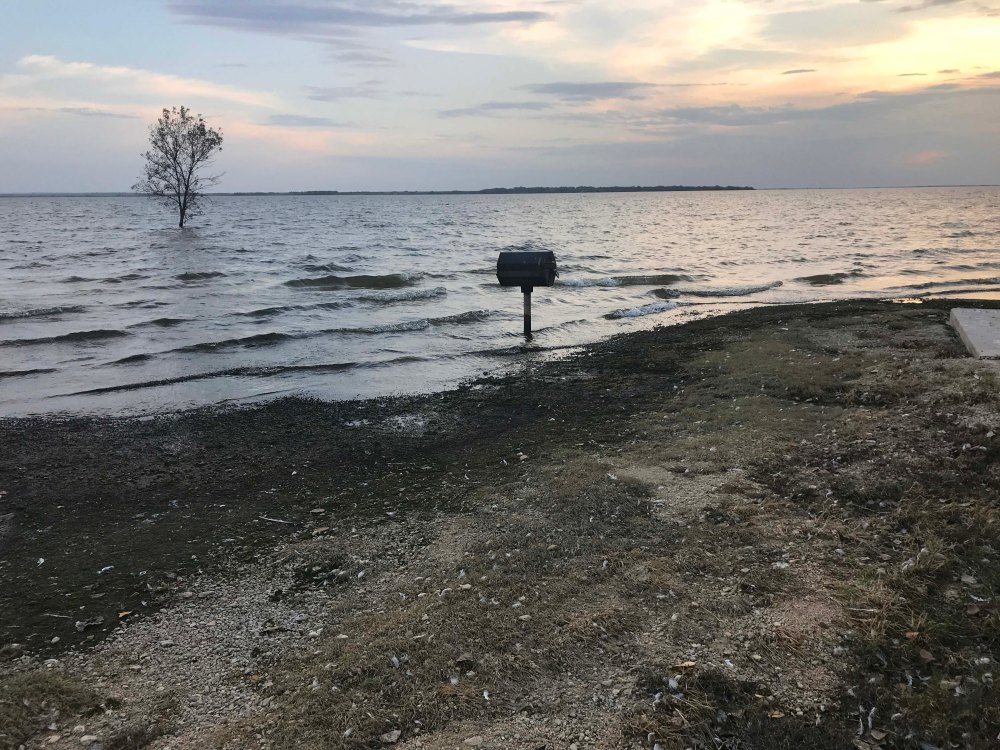 One interesting thing was the lake levels were super high. As you can see this site was under water and the grill was actually in the water.

It looked like the levels had been high all season. Must have been from that flooding early in the spring.

If you look right in the middle of the picture you can just see the pelicans. What a wonderful early morning site.

Really a great park and we took our time in the morning heading out.  I only had one thing left that I wanted to do along our route in Texas and that was to see the original Pizza Hut. I have a real sentimental attachment to Pizza Hut from my childhood so when I learned they had started in Wichita and there was a small museum I wanted to stop.  Thankfully Lee was game and we headed to the Wichita State University campus.  As usual I looked at the satellite image and was pleased to see there was a huge stadium and parking lot across the street.

Unfortunately using satellite images isn’t perfect because it turned out that the parking lot was near full with student parking.  That was not something I counted on, but Lee found a way to make it work, although unfortunately I couldn’t recommend the stop for bigger rigs.  We just got really lucky finding several spots together we could use. In the picture below you can see us parked in a lot that just happened to have an outside row that was mostly empty.

Getting in was easy, getting out was a little trickier.

In the below image you can see the lot we were in and the route we took to get out. It was a little close with cars in all those rows, but we managed.

We had some trouble finding it at first. The signage wasn’t that great 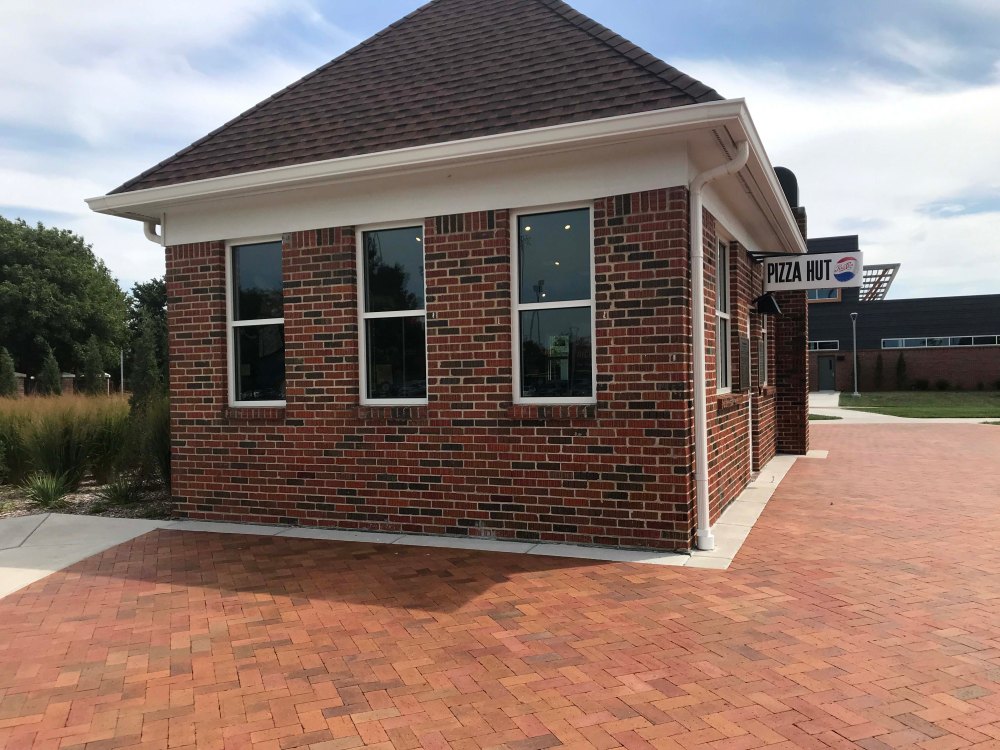 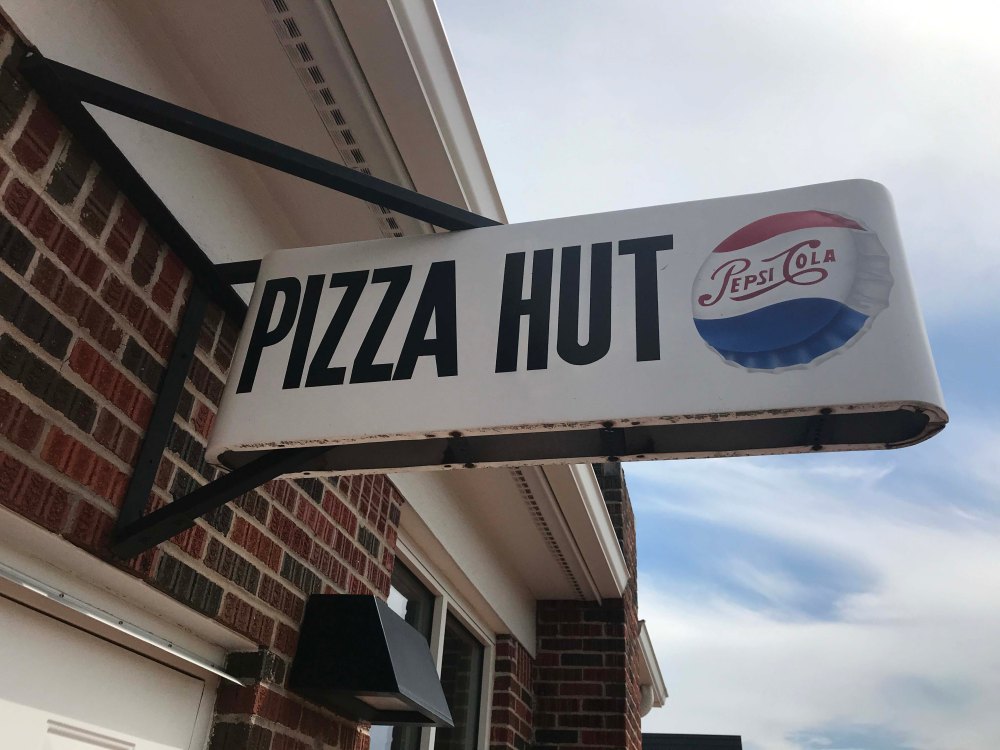 The story is that two brothers borrowed some money and opened a small Pizza place.  They ran the shop and went to school at the same time which was an amazing feat.  Ultimately they sold the concept for $300M …wow.  Lee was disappointed because it no longer looked like a pizza shop on the inside, but I really liked it. In all fairness you have to be a huge fan of Pizza Hut to make it worth it, but because I am it was.

This rolling pin that was actually used gave me chills. Weird right lol 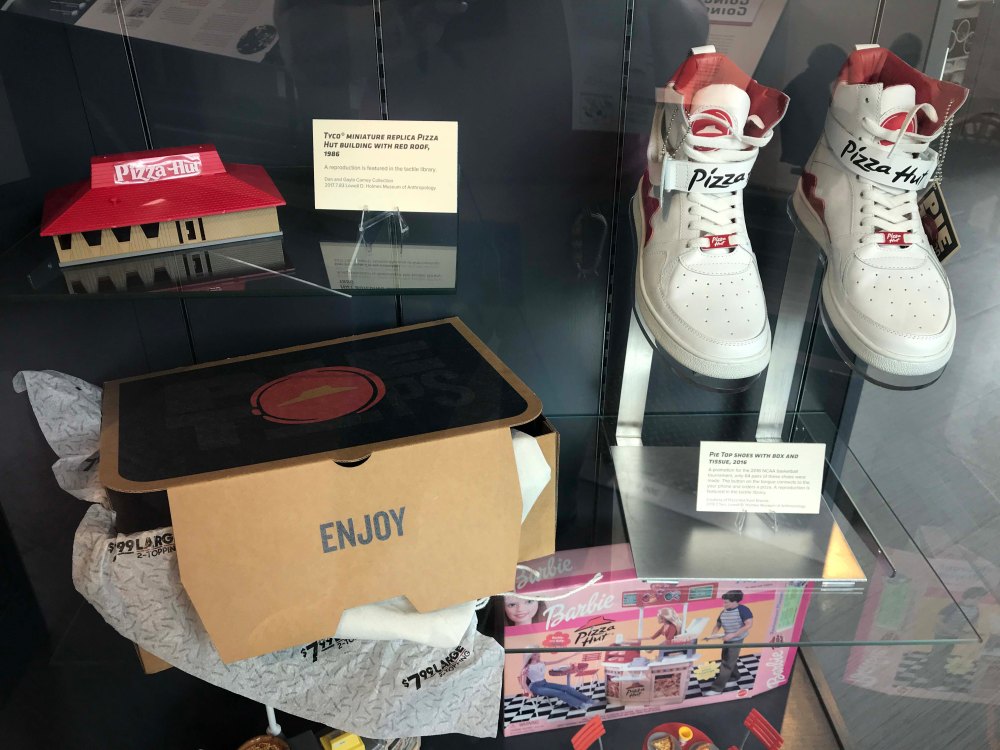 I loved all the memorabilia. The shoes were from a commercial where you could push the button and order a pizza 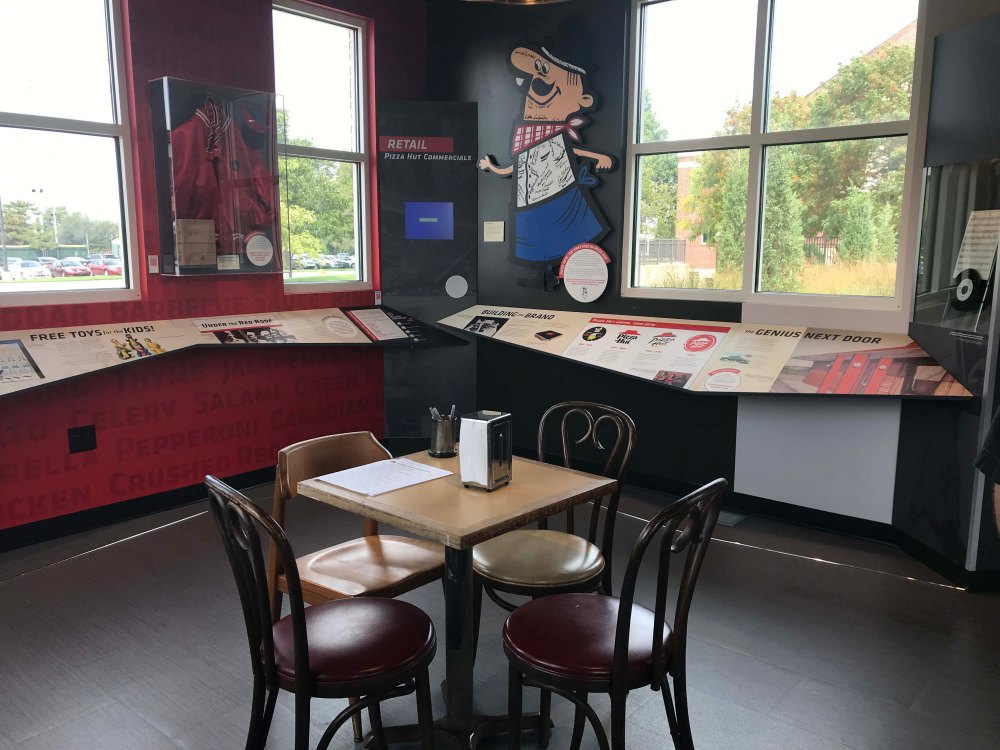 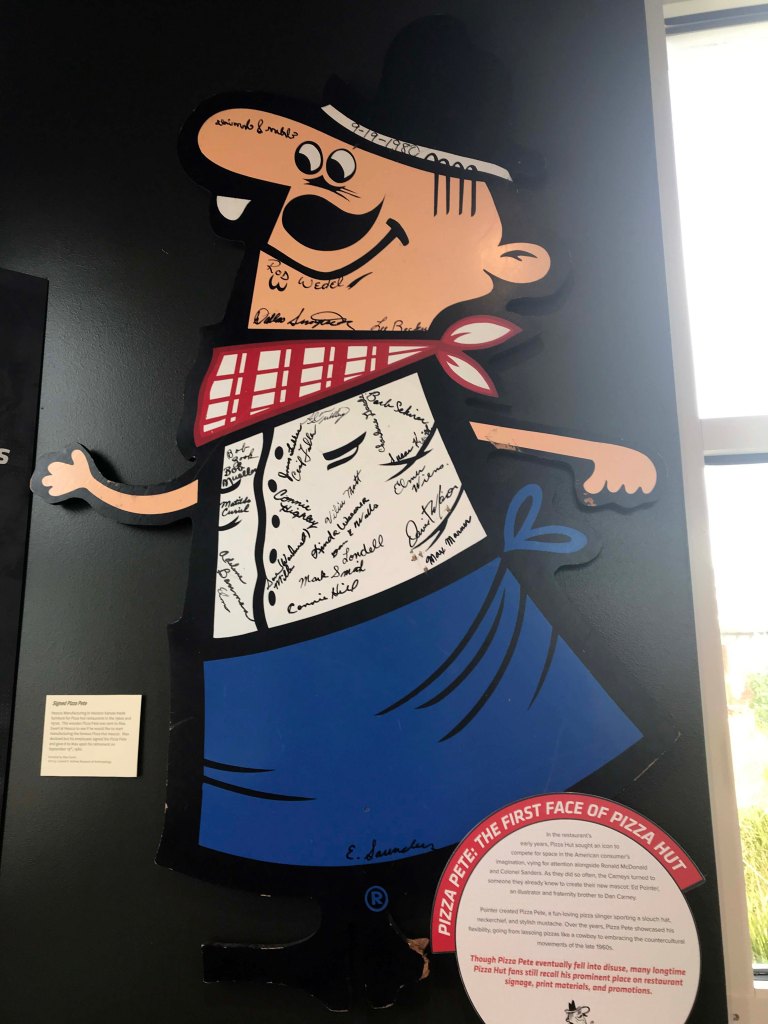 This was fun, push a button and you could see a commercial

I remember these too

Again I only recommend it if you are a huge fan and be prepared to not find parking if you do go. So that was it for us in Kansas and we pushed through to Oklahoma City.  We were meeting friends and were excited to get there, plus there was a huge list of things we wanted to see in OKC.

Oh and one last note.  Jack has turned into a bit of a truck stop Lothario.  We always go into the truck lanes and many truck drivers have small dogs.  Jack is constantly “chatting up” these little pups which is pretty cute to watch.