I wanted to take a moment and write about how I keep up with posts when we are traveling.  As you may have noticed, these posts are in the past, and currently as I write this we are in Oregon.  As a general rule I much prefer writing in the moment and find the posts lose something if too much time passes between the events and when they are written.  When we first started out this used to drive me absolutely crazy and I put tons of pressure on myself to post in a timely manner.  Lee hated the self imposed schedule and we had some conflict over how I was using my time.

Later though, as the blog became more ingrained in our life, he understood my need to write about events.  The balance has always been to make sure I didn’t miss out on living my life so that I could write about it.  While we are working, this has rarely been an issue because we are in one place and have solid internet connections.  When we are traveling it is more problematic and it’s not always possible to write about things as they occur.  To be fair it’s not the writing that is so time consuming, but the pictures.  We easily take 300 plus pictures on a hiking day and every one needs to be looked at.  Once I select the “winners” those need to be fine tuned, sized, and uploaded.  That process can easily take a couple of hours and must be done before the first word is written.  In the cases where Lee takes pictures also he needs time to look at his and see if he wants any added.

Posts with videos are even worse because videos need to be cut, scored with music, and uploaded.  Every video, no matter how short, takes Lee at least 2 hours and generally much more.  So really there is no way to do stuff and process the media from it every day without getting up super early in the mornings.  In the beginning I used to do that, but not anymore.  I do take a chunk of my “day off” and write though because it is an opportunity to get caught up.  Physically I am getting the rest I need and it’s fun to look at the pictures.  Lee rarely wants to spend his days off on those activities though, instead preferring to work on pictures and videos early in the morning.

In order to make all this work I have learned I absolutely need to do two things same day.  First and foremost is to take notes of the experience.  My memory is not as good as it used to be and certainly not when many days have passed.  I use the note feature on my phone and capture thoughts as they occur.  I don’t always use those notes, but I have them in case I want to add them. More than anything it helps me feel I am not missing anything which in turn makes me feel OK about waiting to write about it.  The second thing I have to do is put the pictures in the computer.  Let’s face it, geography can all start to look the same in certain areas and sometimes I have no idea which “red rock” picture belongs to which post.  This is even more important for the posts where the pictures are the star and I use them to tell the story.  Lee and I have worked really hard to find a compromise in this area and now we have one folder for his pictures and a second one for mine.  In general I tend to use my pictures to tell the basic story and use his to add additional beauty to the post.  Not every post I write has pictures from Lee but the most beautiful places almost always do.

You may or may not be interested in all of that, but I thought some of you might find it helpful.  Even if you don’t write a blog I would recommend having a good way to organize your pictures, because I can’t tell you how many times I have had to go back and find a picture of something.  Having them in folders by date makes this MUCH easier, and having them grouped by event even more so.

That’s not all I did on the day off though, I also walked around a bit with Jack and took some more pictures in our boondocking spot.  It was a beautiful day, and for once the wind wasn’t that bad.  We also got together as a group and ran two air fryers and enjoyed some chicken wings with multiple sauces.  Huge fan of the air fryer for making chicken wings, and we all had a nice, relaxed day.  We were also saying goodbye to Steve and Deb who were heading out to their next spot, so it was great to just be able to hang out.

Then we went outside and walked around a bit.  Nice view 🙂

Jack was sniffing everything. 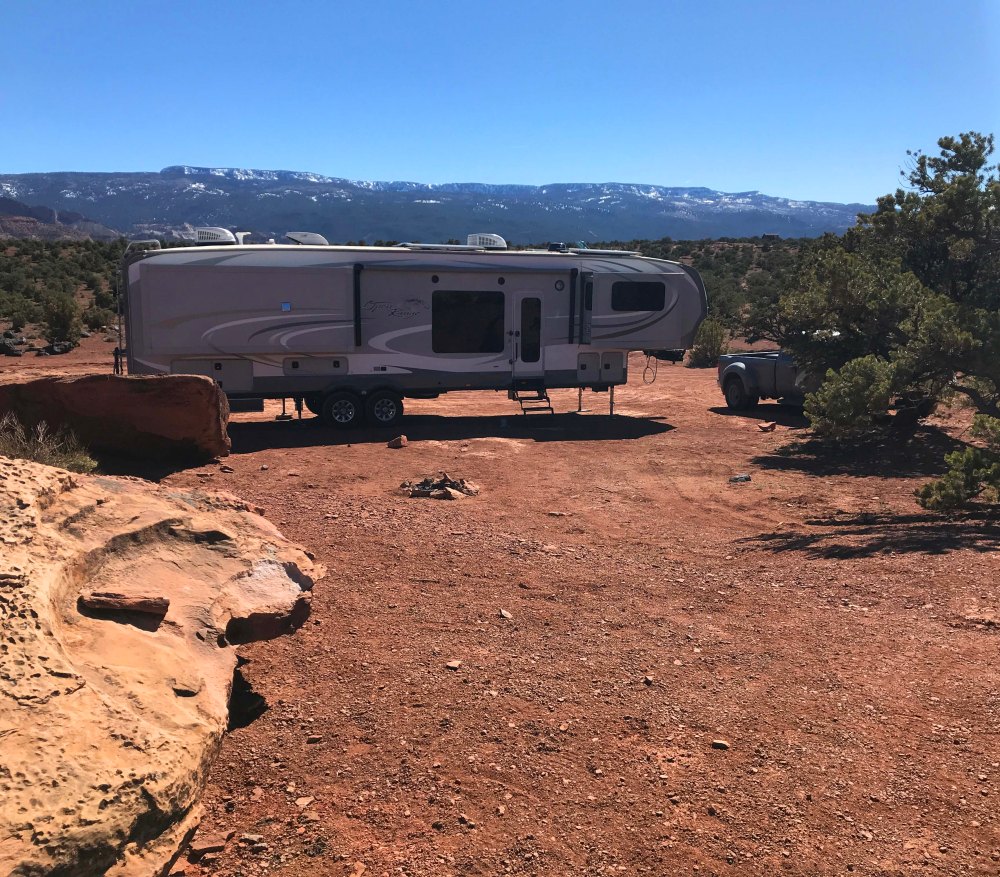 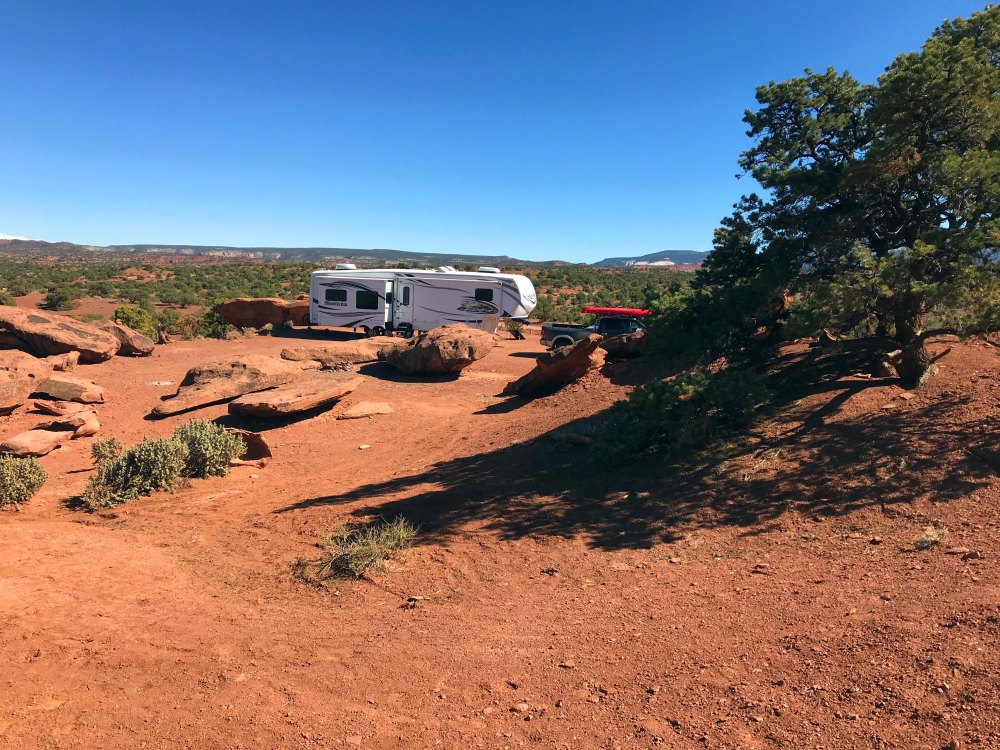 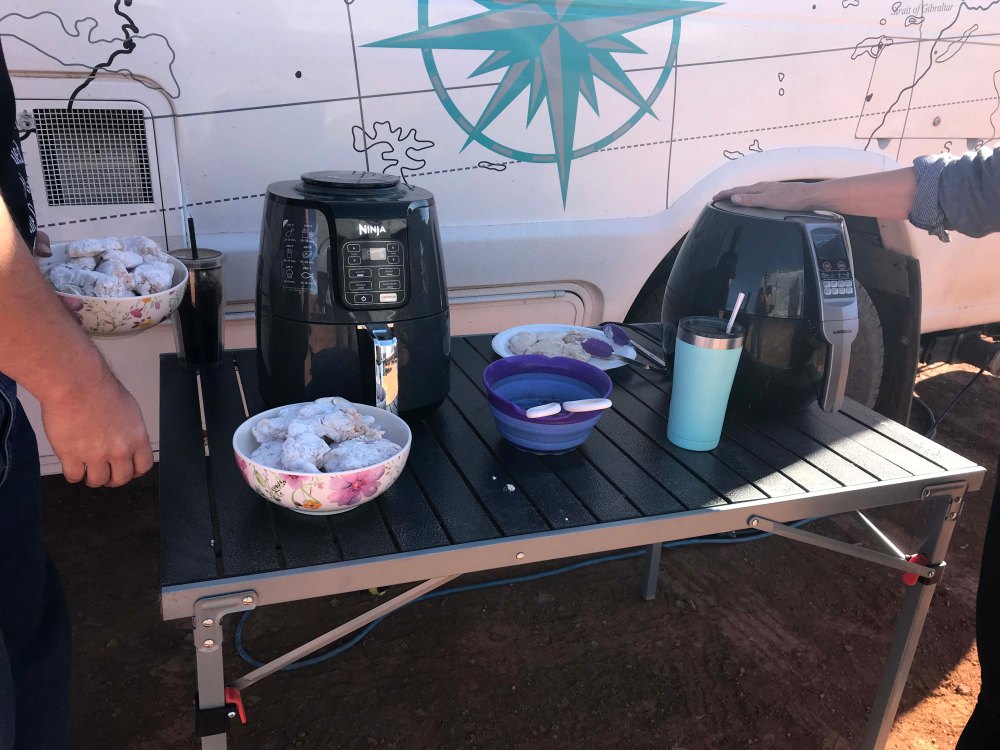 Lee and Cori were in charge of making wings 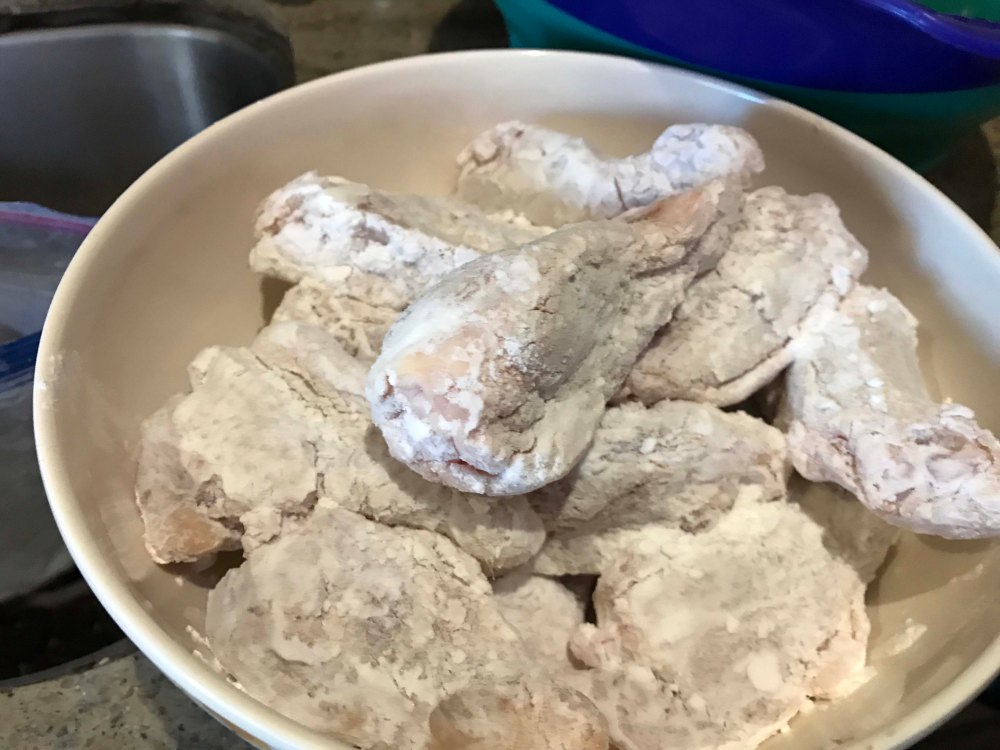 Most of them we dredged in potato starch then fried.  After they cooked Cori tossed them with sauce.

This has been really hard to find while traveling but Lee found five bags at the little country store nearby. Crazy and tasted really good.

And a nice fire in the evening!