I’m not much of a New Years person so being at the gate didn’t really bother me.  I didn’t even watch the ball drop, although I was awake and certainly could have but instead watched dome Downtown Abbey and kept to my normal routine.  I did spend some time on New Year’s day though watching the Rose Bowl Parade (crazy how the float got stuck) and the Rose Bowl game which Ohio State won.  Both New Year’s Eve and New Years Day were very quiet which was nice and it seemed like lots of people weren’t working that day.

Speaking of work I wanted to take a moment and try to explain what this job is like.  Essentially we are living on the corner of a huge western ranch and our sole responsibility is to open and shut a gate when cars/trucks come in and out.  Generally it’s pretty easy work, especially when the volume of vehicles is low, but it can be pretty unpleasant when the weather is bad, which is was for a couple of days.  Some gates are left open in bad weather, but this particular one has to be physically opened and closed every time and standing in the wind and rain isn’t fun.  Thankfully those days have been the minority and most days are really beautiful.

Mostly we have only a smile and nod relationship with the people we open the gate for but on occasion a salesperson will stop by and give us a present.  Bringing food is a pretty common sales technique down here and sometimes we get lucky.  The other day the job sites refrigerator was full and we received a huge rib eye, homemade gumbo (which was excellent) and some root beer.  It’s totally random and we never know when it will happen but we are always grateful for being included.

Frozen gumbo had sausage, shrimp, and chicken. Lee LOVED it!!

I do understand why they want the gate monitored here though because the cow herd definitely understands that the gate is a way out.  They have been getting closer and closer as time has gone on, but Jack has been surprisingly good at chasing them off.  The other day the entire herd was edging closer and all of the young make bulls (with horns) were facing us, but I took Jack out and his bark actually chased them off.  I heard the guard before us had a blue heeler who kept them in line so they are somewhat conditioned to keep their distance.

The cows aren’t the only animals though, because this is a really wild stretch of land and there is lots of wildlife.  We have seen deer, bunnies, hawks, and various birds and a couple of days ago two HUGE javelina hogs walked across the road about 30 yards from us.  The pigs are of particular concern because they will attack people and kill dogs, but thankfully we only saw them that one time.  I wish I could have gotten a picture to so how big they were but they crossed the road pretty quickly and disappeared into the brush.

That’s the thing about this ranch the land is pretty inhospitable.  There are huge cacti, burrs, and thorn trees everywhere so we mainly stick to the road when we take Jack for walks.  I’d love to walk around a bit, but between the pigs, snakes, and coyotes we here in the distance, I always keep the RV in site.  It’s a bit like living on the edge of a large nature preserve except people work here.

Despite the difficult terrain, this continues to be a spot for people to try to cross into the US.  Lee sees border patrol almost every day, and the other day four cars came in and captures 14 people who were trying to make the crossing.  I don’t want to get political and talk about whether or not a wall would work, but I do think it’s important to mention that here on the “front lines” there is a ton of activity.  I don’t think I realized how much of this was happening down here, but the frequent passes by helicopters and other vehicles make it a bit like living in the inner city.  At night I often see activity right across the highway from us and it appears as if people are being picked up (either by border patrol or others I can’t tell), but so far no one has approached us and I am minding my own business.  Again not saying its a crisis or anything but there is alot going on down here.

It is pretty though and we have had some spectacular sunsets.  One in particular on New Year’s eve was really special so I took several pictures. 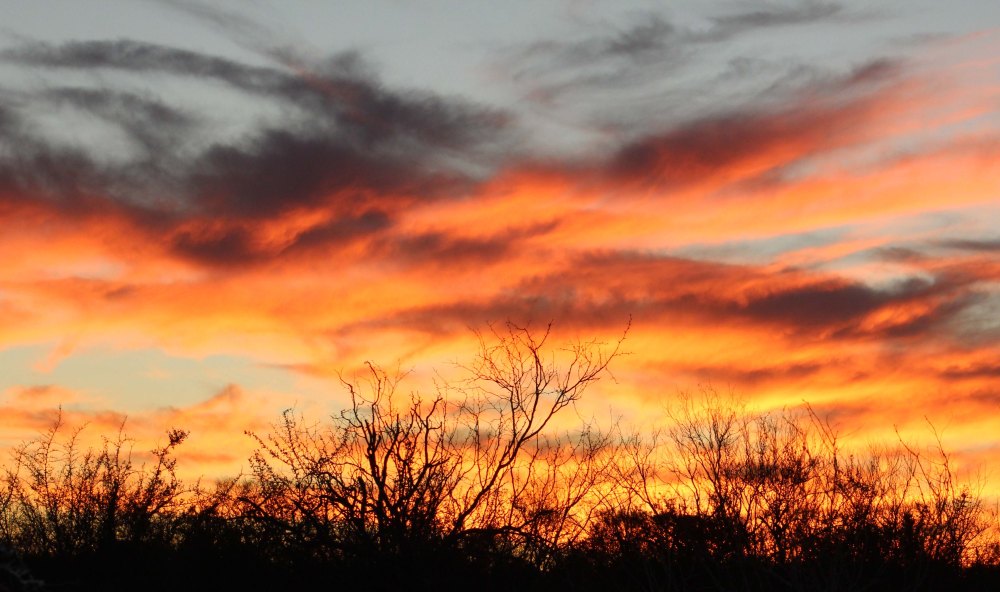 So what have we been doing??  Well I have been watching lots of football, reading, and working on cross stitching the baby blanket.  Lee on the other hand has been very busy because he has rediscovered ancestry.com.  A couple of times in our marriage he has been very interested in genealogy but always got stuck at a certain point.  There have been major breakthroughs in his family tree though and he has traced his paternal line back to 230 BC.  He’s been having a blast with it and I am glad he is enjoying himself because we have lots of time to fill.  Seems like a ton of work to me, but he is really into it and good for him.

That’s it really, and again I don’t know when the next blog post will be.   Nothing much exciting going on here at the moment, and I don’t like to write when its the same old same old.  I did want to throw things open though like I did last year and if anyone has any topics/questions they would like me to discuss I’m happy to do it.  Just pop me an email at camperchronicles@gmail.com and I’ll write a post about any topics you have an interest in.  Otherwise I’ll post next when something happens.

4 thoughts on “Celebrating New Year at the Gate”