While we were looking for jobs this week, we celebrated two more birthdays.  Mairead, who is staying next to us, had her birthday on Wednesday and since she is a pretty low-key person didn’t want much of a fuss.  Kelly made some lasagna for everyone, and then we had a couple of drinks and a fire.  The conversation was really flowing and I enjoyed hearing Dave and Mairead tell stories about their native Ireland.  They are also studying for their US citizenship test and out of curiosity I had her ask us some of the questions.   Turns out that I remember quite a bit from my high school government class, but I still think I would need to study if I had to take the test.  At one point they asked a question about the amendments and I started humming a Schoolhouse Rock song. They both looked pretty confused and then we got into a long conversation of the importance of Schoolhouse Rock in our education.   We highly recommended they watch the history episodes and can I just say if you have a child in your life who has not been exposed to the wonder of this show your should buy them the 30th anniversary DVD for a Christmas present.

Mairead, Dave, and Lee having a serious discussion about Schoolhouse Rock!

The next day was Kelly’s birthday, and since Bill was working on a solar install I decided to take Kelly to lunch.  If I forgot to mention it, Bill is now working with Greg for RV Solar Solutions and they have completed several installs the last few weeks.  That has given Kelly lots of free time, and we have had a chance to hang out together.  I let her pick the place and after searching Yelp she selected the Startz Cafe. The town of Startz is one of the many small town on Canyon Lake and has a pretty interesting history.  The family came to New Braunfels with Prince Solms and eventually migrated to the lake area.  They owned a general store and gas station, but once the Core of Engineers built the dam the area needed restaurants and they expanded, 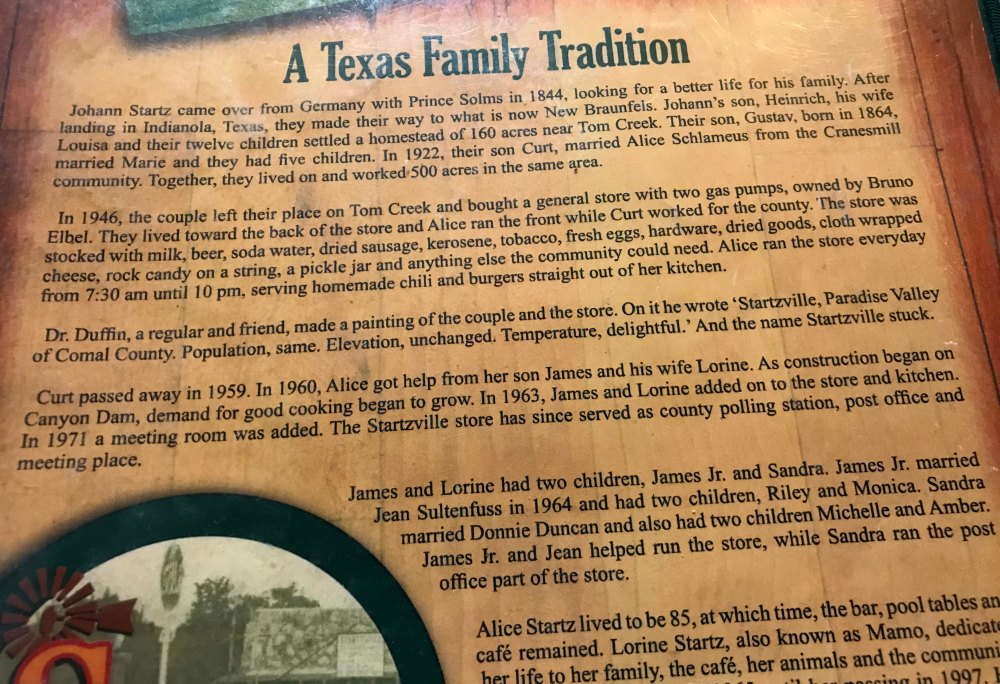 I love that the town was named based on a local Doctor who said, “Startzville, Paradise Valley of Comal County. Population, same, Elevation, unchanged. Temperature, delightful. ” The name just stuck.

The restaurant definitely showed its early beginning, because it was part bar, part restaurant, and part gathering place.  The food was really good though and we both liked our food very much. It was definitely a local place though and our waitress was a little cool, especially when I asked her to take a picture.  I get that locals don’t like to feel like their places are a tourist attraction, but hey they kind of are.

You can see where the building expanded over time.

The inside was an interesting mix and had two levels and an outside area.

The deer were all dressed for Christmas. Gotta love Texas.

My club sandwich was outstanding.

After lunch, we stopped at the Dollar General (they are very popular in this area) and I looked for bells.  My son-in-law Jeremy trained his dog to ring a bell on the door when he wanted to go outside and I wanted to try it with Jack.  Since the dog bells online were nine dollars,  I wanted to see if I could find a cheaper solution.  I know it’s only $9, but we are on a budget here.  Luckily they had numerous Christmas Bells in the store and I was also able to get a doggy play tug rope, which Lee disassembled and used to create our down dog bells.  Our cost was $4, and we will see  whether Jack learns how to use them and if they hold up over time.  By the way, according to my daughter you train them by lifting their paw and use the paw to jingle the bells every time you take them out.  She said her dog Finn picked it up really quickly, so we will see if Jack is that smart 🙂

Lee’s home-made bells.  Make sure whatever bell you select you can handle the tone. One downside is they jingle every time we go in or out. These are pretty pleasant though.

Because Cori was on a work trip, we decided to hold off Kelly’s birthday dinner until the weekend, and instead she and Bill went to a nice dinner at a local Mexican restaurant.  I made sloppy joe’s for Greg and Lee and we had a nice relaxing night.  Jack and Hobie were having a really busy day though because they invented a new game.  We bought these Redbarn Bully Sticks at the local HEB and even though they both had one they kept stealing them from each other.  Jack would chew on his until he got bored and then Hobi (affectionately known as thug dog) would come steals it.  As soon as Jack noticed it was gone, he would grab it back and then Jack would dig a hole and bury the chew until eventually one of them would dig it up.  Thye did this over and over again and it was super cute to watch and I have to say Hobie has been absolutely amazing with Jack.  He’s really patient with the puppy shenanigans and I know they are really going to miss each other once we leave for work. 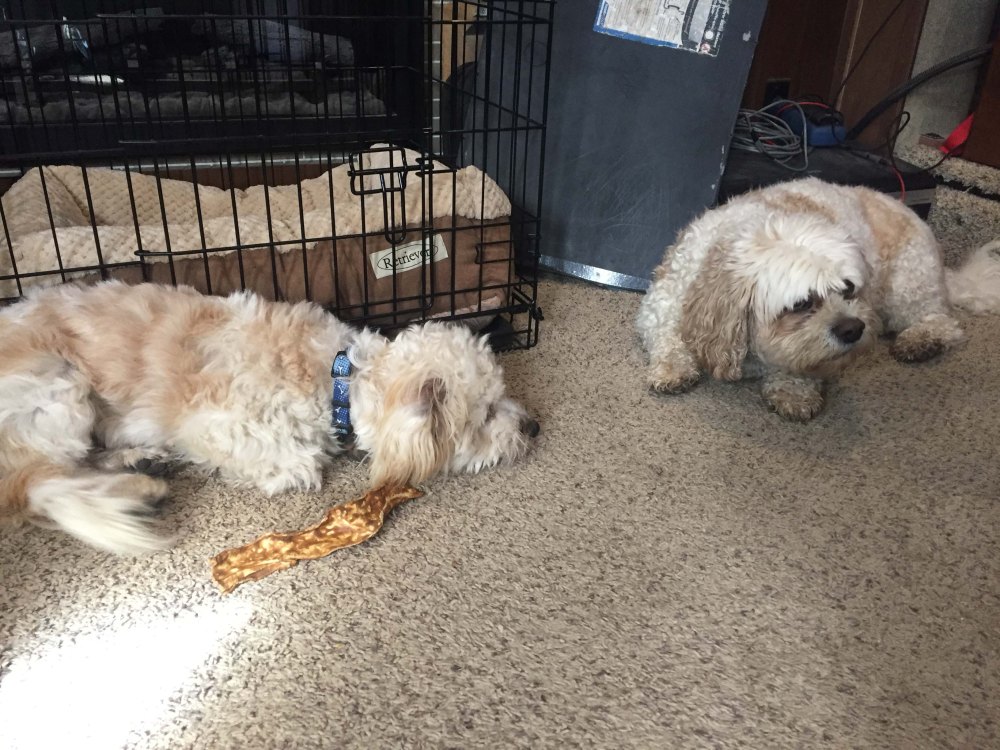 Then he gets bored and Hobie waits for the perfect moment and grabs it.

Jack;s face after he grabbed it back and buried it. Too cute!!

On Friday, we had a busy day because finally we were having lunch with Julie and Casey.  We last saw them up in Portland two summers ago and they reached out when they saw we were staying in San Antonio.  Things have been crazy and we didn’t have a chance to get together until now and I was glad we were able to make Friday work.  We met for lunch at The Gristmill in Gruene (pronounced Green) and I was glad I got to see this little town all decorated for Christmas.  Gruene has the oldest dance hall in Texas and lots of really cute shops and restaurants.  I decided to take Jack because it has been awhile since he has been in the truck, but unfortunately he didn’t do so good this time.  When we arrived, we discovered he had thrown up all over the mat he lies on in the back and it took awhile to get that cleaned up…yuck!

We were still on time though and Julie and Casey were waiting for us.  It was great seeing them and we immediately started catching up, but I also had to take a minute to check out the restaurant.  It’s design is really special because it has multiple levesl, with multiple rooms and lots of glass windows overlooking the river.  The service was great, Lee loved his catfish and the company was outstanding.  Loved seeing them and hearing all about their first work kamping job in the Grand Tetons this summer.  We could have spent hours talking, but needed to get back to Jack and thankfully he didn’t get sick on the way back.

The restaurant looked small from the outside but wow it was not. 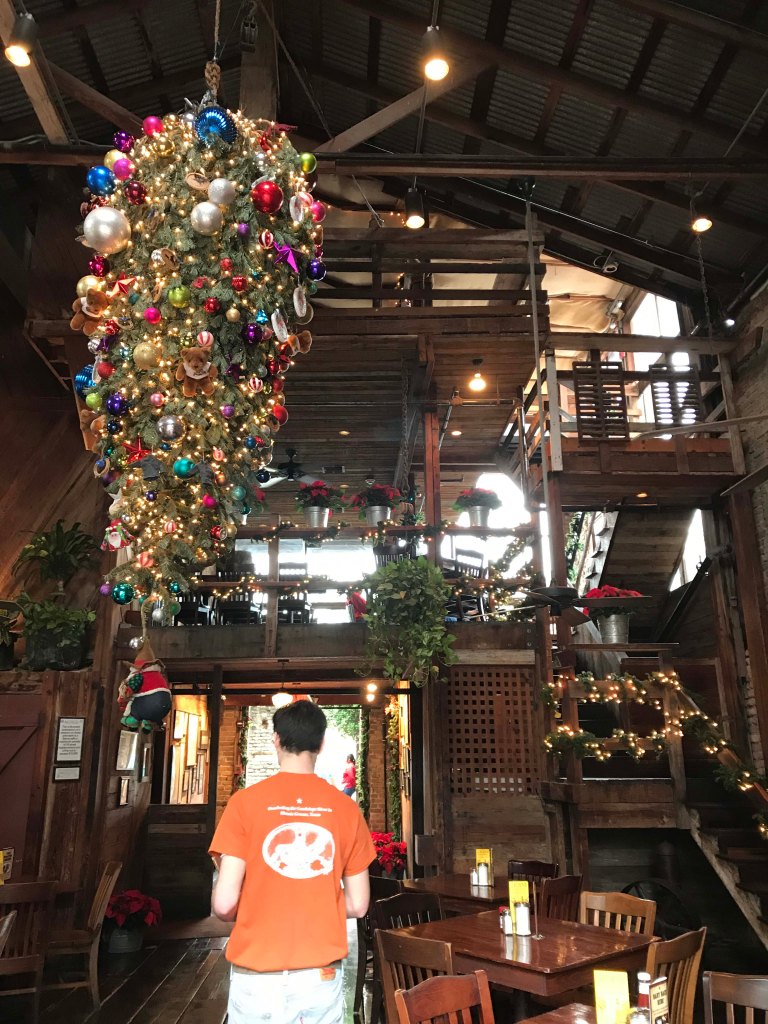 The front entrance to a VERY large restaurant.  The stairs went to multiple levels and there was way more past that.  Our friend Kat says it was designed like a tree house and it kind of was.  One of the coolest restaurants, architecturally, I have ever been in.

Our room was open and airy with lots of fans and big windows. The look on Lee’s face is because he was describing the daily specials 🙂 Lee loves his food!

Every room (and there were several) had unique features 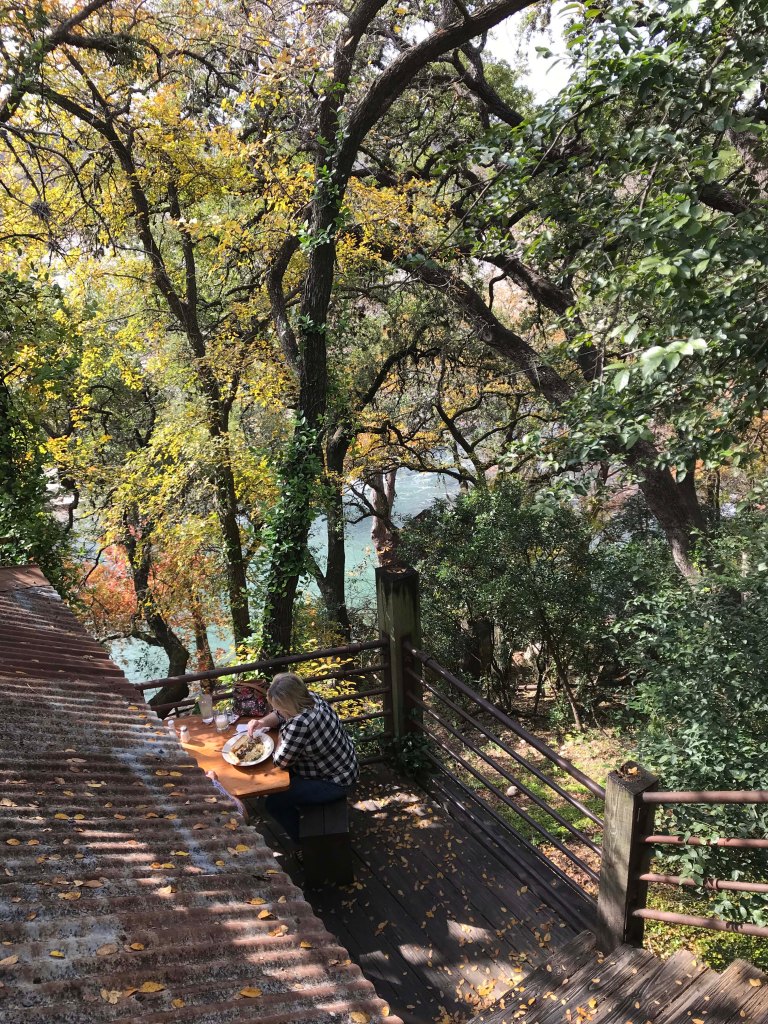 Saturday we were finally able to have Kelly’s birthday dinner and we were all looking forward to eating Bill’s phenomenal wings and Grandma Murray’s famous carrot cake.  I also decided to make Sue’s Rally Dip, which Lee absolutely adores but I never make unless we are with lots of people.  The food was great and the company was better and we all enjoyed eating and then hanging out by the fire.  I am never with Kelly on her birthday either and it’s been great being available to celebrate all these birthdays with my friends.

Hanging out by the fire

Denny sent us this sign awhile back in a care package but we thought it was perfect for Greg so it found a new home!!

Finally cake time!! Bill makes one of these every year for Kelly 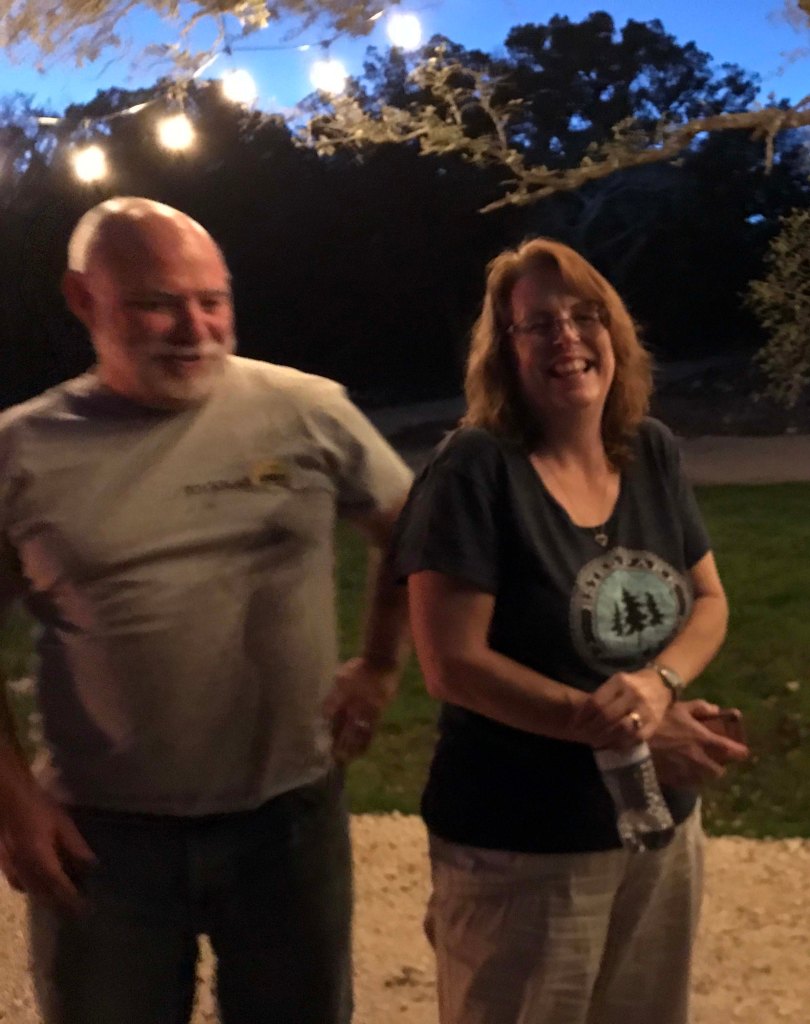 You can see how happy she was

We switched the numbers 🙂 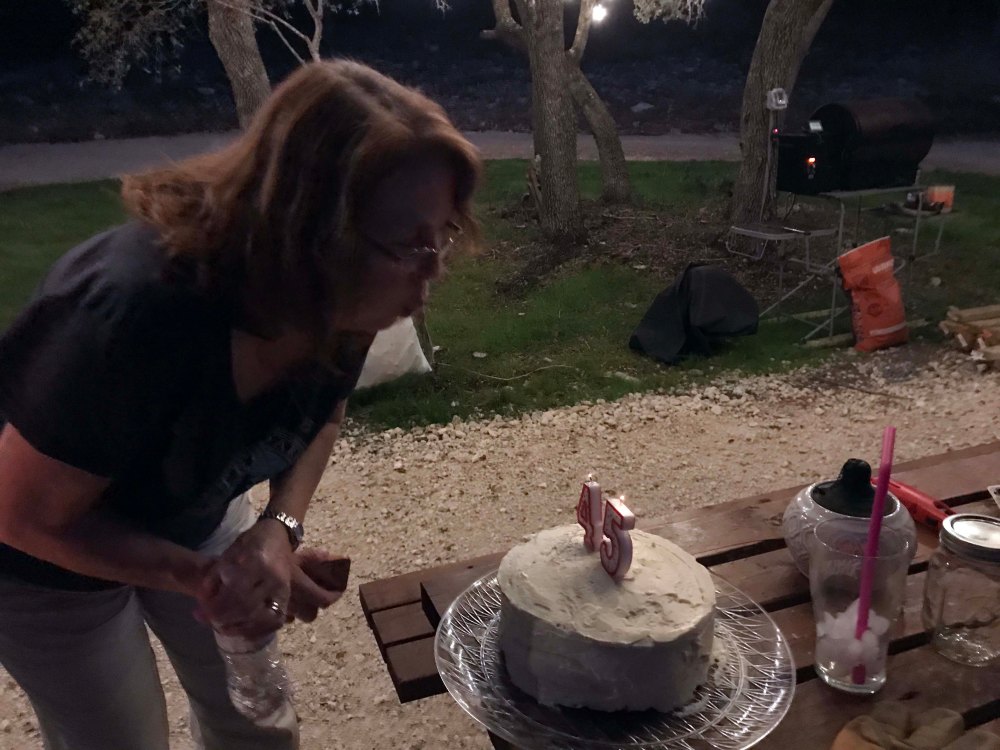 Great seeing everyone, but hoping to get a gate soon.  Things are heating up on the job search front, but more on that later.