Vegas is kind of a weird place to meet up with people.  There are so many choices and different things to do that people tend to go off in different directions.  Plus because we were at Circus Circus and Mom, Eddie, and Wendy were on the opposite end of the strip at Polo Towers, some coordination was called for.  Throw in that everyone else was on East Coast time and the fact that Mom was still sick, and it was all just very complicated.  Despite all of the challenges we did get to spend some time together and everyone seemed to have a fun weekend.  Here’s some of the things we did.

Wendy, Eddie, and I met at Aria to watch the Buckeyes game. Since we all grew up in Columbus we are avid Ohio State fans, and it was fun to watch a game together. It’s pretty obvious we are related.

We also met up at New York New York one day for lunch and Mom felt good enough to come.  She had picked up some kind of flu either on the plane or in a casino and was in and out all week, but she tried to join us when she could.  New York, New York was a great place for lunch since they have lots of reasonably priced choices.  Actually New York, New York turned out to be one of our favorite casinos all weekend.  Lee has gambled at Bally’s almost exclusively for many years, but now on weekends all of their blackjack tables have minimums of $15-20. That’s not in our budget, which totally bummed him out, but then he discovered New York has $5 tables 24/7, so he played there a few times.  The $5 tables have pretty lousy house rules, with 6-5 payouts, but he still manages to play for hours and basically break even, and has a great time. Overall he only spent $40 the week we were there and got tons of free drinks in the process.

I played penny slots all week (roughly $10 a day) and ended up spending about $30 all in.  One thing I will say about penny slots is I was disappointed by how many of the new machines require a minimum of a 25 cent or higher bet. The whole point of penny slots is to keep the costs down and the new machines aren’t cheap.  But almost every casino has a corner where they keep the older machines and I always looked for those when I played.  Basically I end up playing $5 in every casino I go to and the most I won was $18 but hours of entertainment at minimal cost.  Eddie and Wendy aren’t gamblers though (Wendy tried a slot machine for the first time and wasn’t a fan) so they spent time walking through the various casinos, which Wendy had never seen.  Eddie had a good friend who worked in Vegas when they were younger and he’s been many many times, but Wendy has only been twice so lots to catch up on. 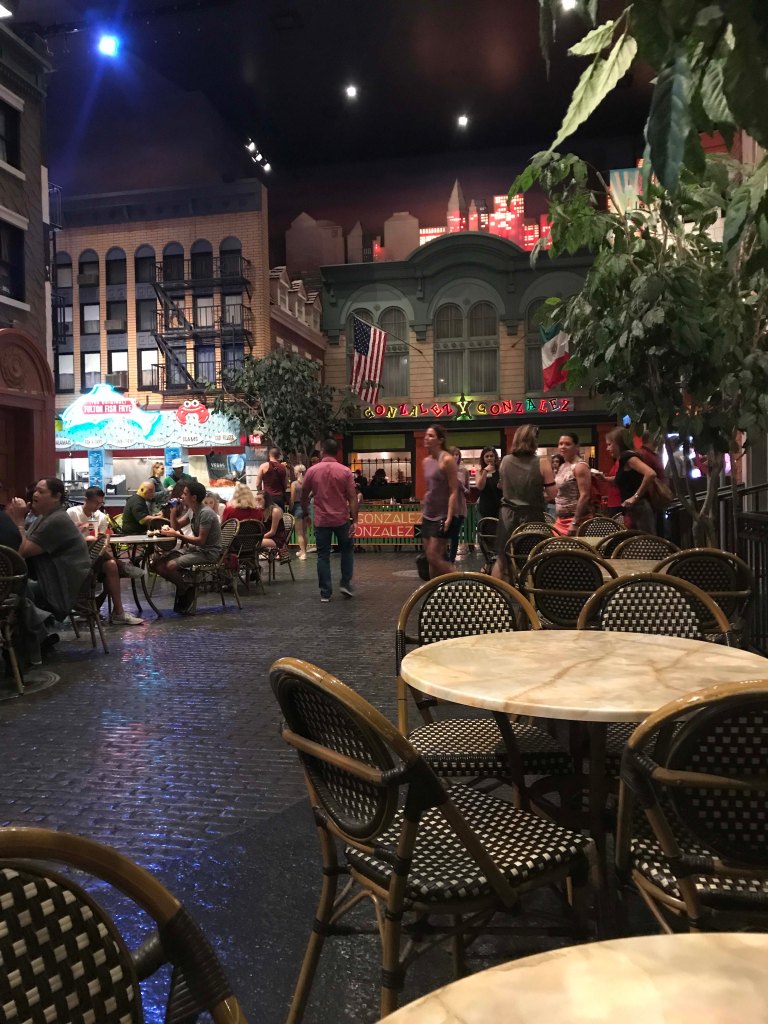 The big thing they wanted to do was see Beatles Love, and since that is Lee’s favorite show he went with them.  Mom and I had just gone not that long ago so we opted out, but we did all meet for dinner at Caesar’s Rao Italian Restaurant.  If it’s my choice I never choose Italian when eating out and this place was super expensive.  Eddie, Wendy, and Lee loved their meals but Mom and mine were just so so.  I will say the wine was outstanding though and our waiter was really terrific.  Plus I was glad that we got this cool picture of all of us, which was great since the room was super dark.  Tip to restaurants, when people have to pull our their phones to read the menus, the lighting is too dark. 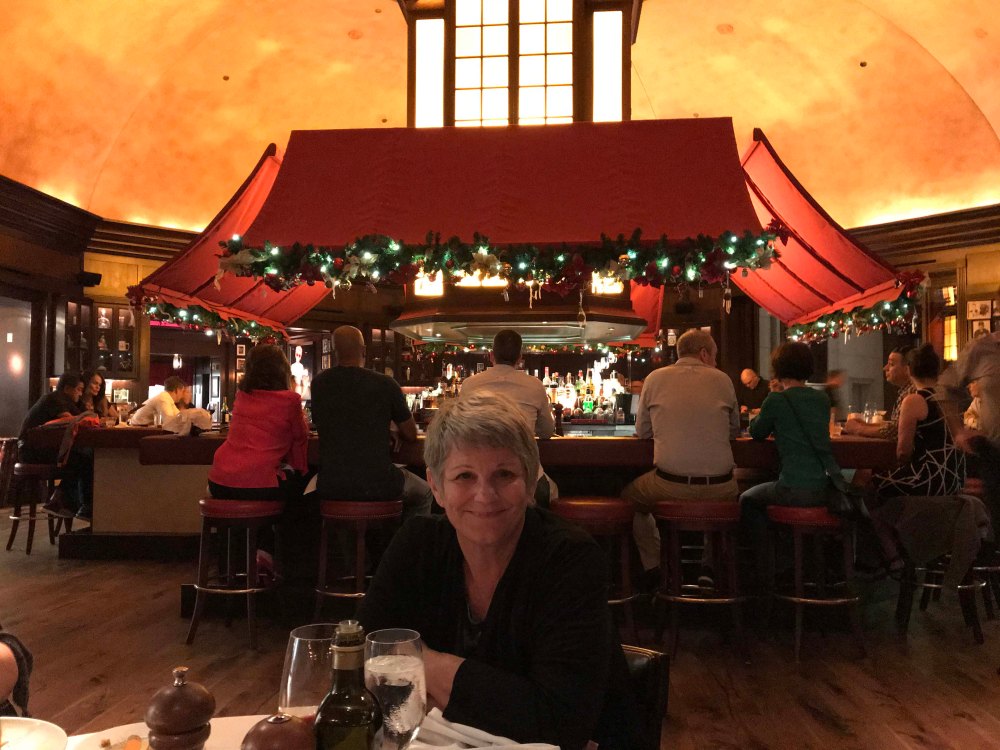 Mom at the table

And I really liked this half bottle of wine. So much so that I took a picture, 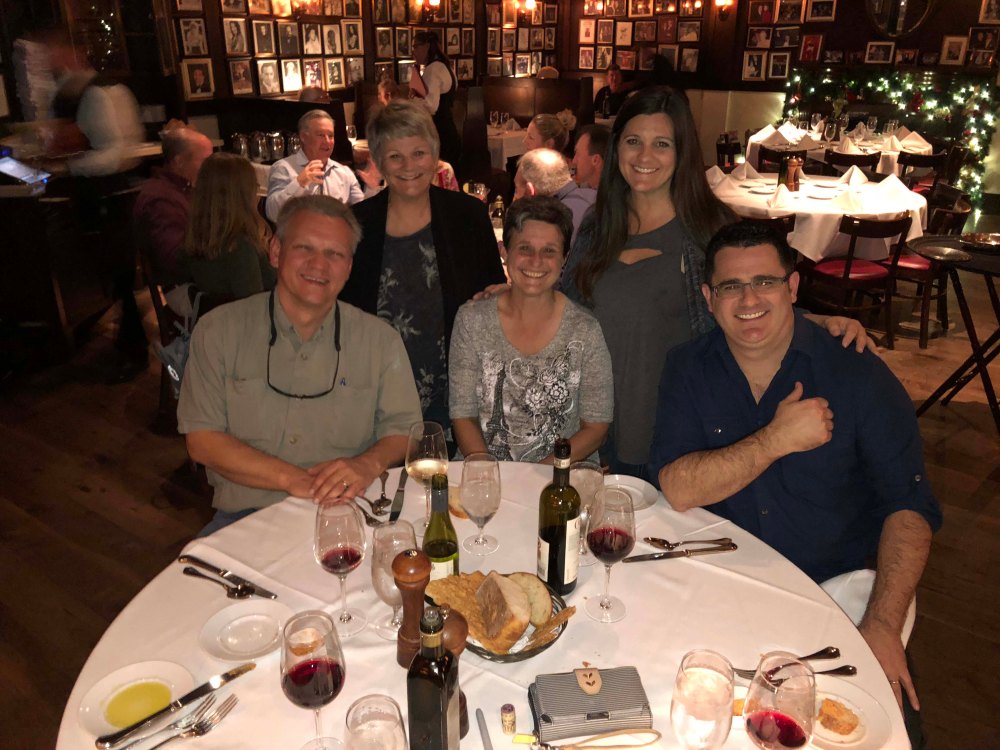 From Left: Lee, me and Eddie in the front and Mom and Wendy in the back

After dinner we wandered down to the Mirage and then I headed home while they saw the show.  Lee had lots of energy because afterwards he went down to New York to play some more blackjack and didn’t get home until 2:30am.  Vegas Lee is an interesting guy, he has tons of energy.  The next morning I decided to go to the outlet mall and check it out because I really wanted a new purse.  I don’t use a purse much in this lifestyle and have had the same one for three years, but it’s getting a little worn.  I lucked out because Coach was having a 70% off unadvertised sale and since I picked a clearance item I got an additional 20% off of that.  So for $105 (including tax) I bought a new purse and a wrist clutch and I was super happy. 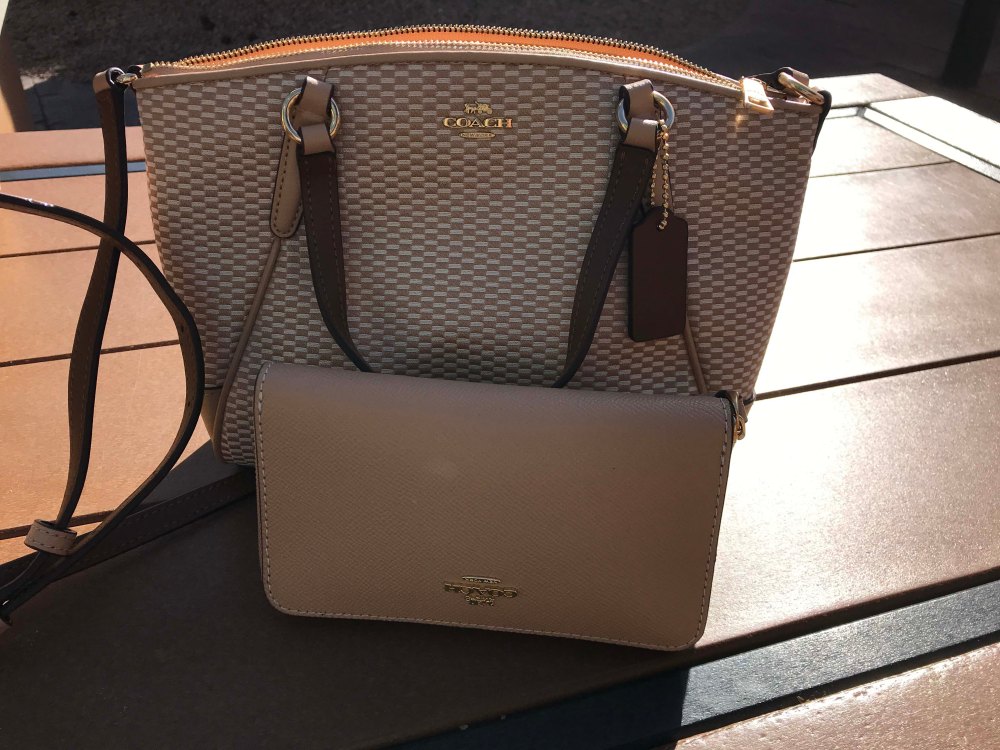 My new purse and clutch hooray!

One interesting thing about the outlet malls in Vegas is they have stores you don’t see in other places.  They had a Jimmy Choo outlet and a Robert Cavalli outlet and even though I couldn’t afford anything in either of those places it was fun to look.  For me it’s weird going to Vegas, especially living this lifestyle, because it brings out the largely suppressed materialistic side of me.  I basically live in jeans and t-shirts, but all those pretty dresses and designer clothes do have an impact.  Which is crazy because where in the heck would I wear any of that, but I did buy one shirt ($10 on clearance at Banana Republic) that I can wear for the occasional dinner out.  I also find that in Vegas my middle aged pudginess really bothers me. Again not really something I think that much about in this lifestyle, but being surrounded by gorgeous and trim young women everywhere you go really makes me feel my age. Ahh well.

After shopping I met Mom and Lee at the buffet at Paris because I really wanted to try it out.  At $30 each the buffets aren’t really a bargain, but they can be fun if the selection is good.  I liked mine, but Mom and Lee weren’t that impressed and Mom wasn’t feeling well again so we parted ways.  We met up that night at Harrah’s to try out a piano bar and since we got there a little early I got to watch the last half of the Patriot’s/Kansas City game in their VERY nice sports book.  That was a ton of fun and the seats were super comfortable and since the crowd was mixed with KC and Pats fans and the game went down to the wire it was great.  Afterwards we met up at the Piano Bar and caught watched some very fun Karaoke waiting for the piano players to start at 9pm. 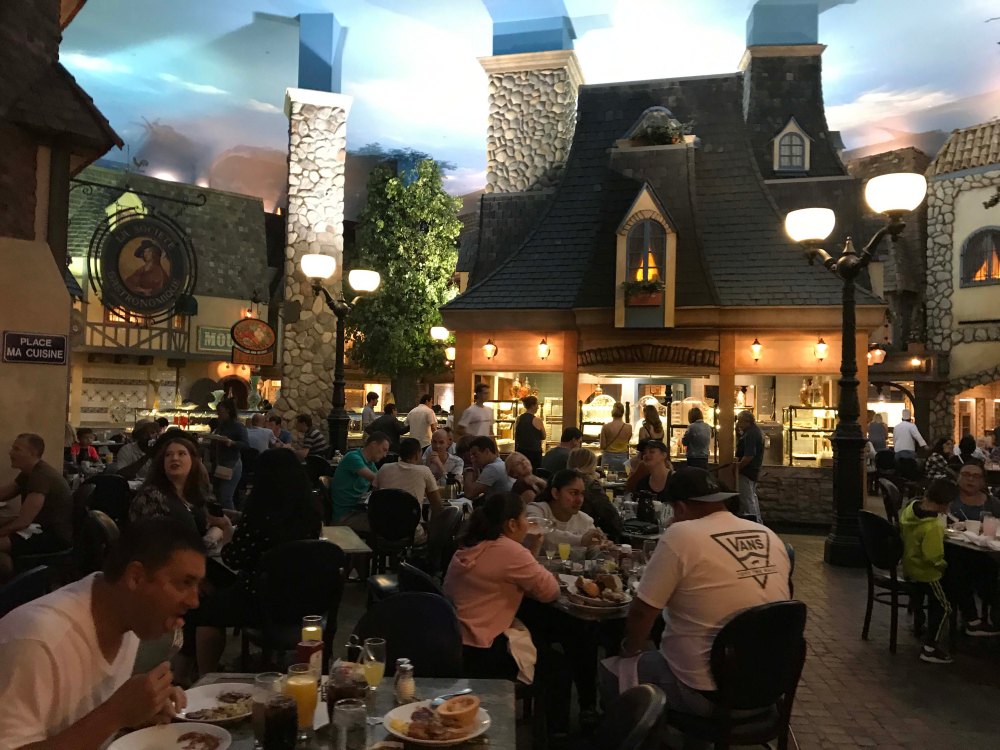 The Paris buffet has a cool courtyard vibe

The deserts were amazing.  The best Creme Broulee I have ever had. 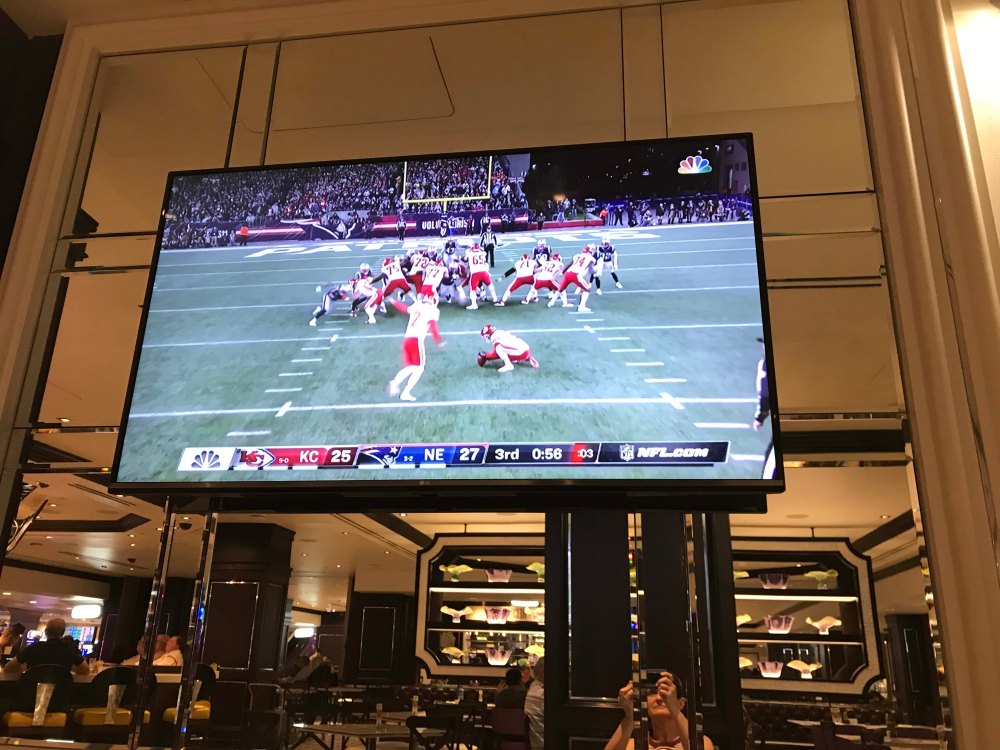 Hooray the Pats won at the very end by a field goal! 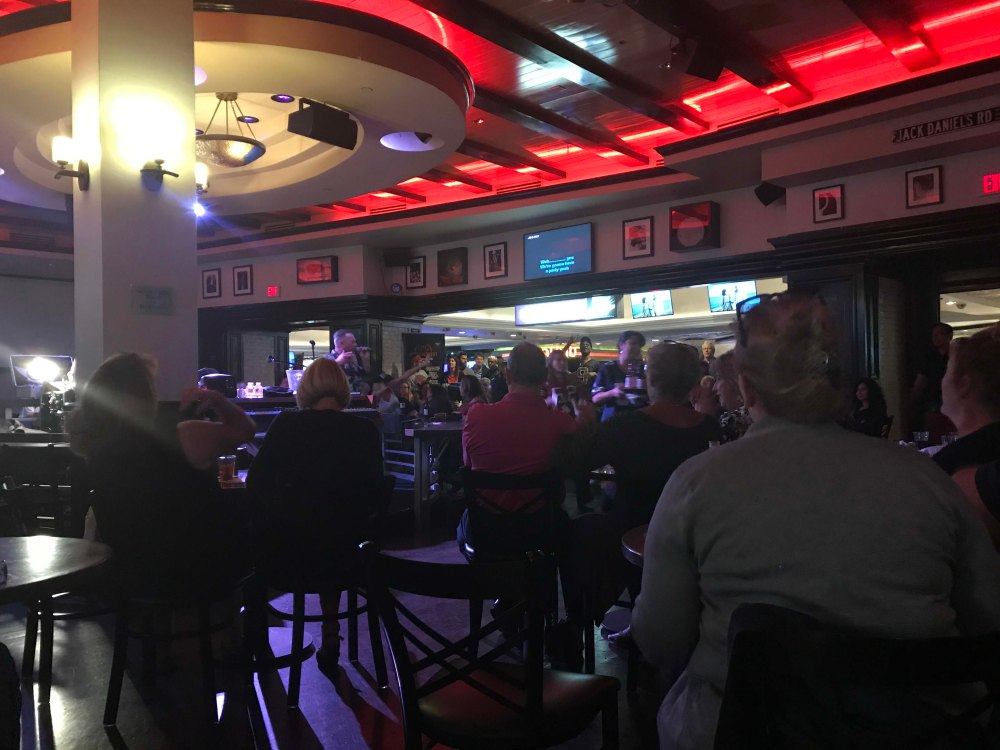 Unfortunately the regular act (twin girls) wasn’t there that night and the two guys that replaced them weren’t really that good.  Plus it was loud and not conducive to having a conversation so Lee and I took off because we had an early start in the morning.  I am really grateful that my Mom arranged this meeting with everyone, but I will say that Vegas just isn’t my favorite place to meet with people.  It’s really challenging to keep costs down, no matter how hard you try, and there aren’t many activities that lend themselves to just hanging out and being together.  Lee liked it though…he never has a bad time in Vegas, but next time we get together I am going to lobby for mom to trade her timeshare our for another location…someplace with more nature in it.  It was very nice of her though and I am glad we all got to be together, but off to the next locations.  We are headed to Texas to spend some time with Cori and Greg (who we haven’t seen in almost a year) before starting Gate Guarding .  Hooray! To end the post here are a couple of random shots I took along the week.

This beautiful bus was a couple down from us in the RV Park and the coloring was striking. Would have loved to get a look inside 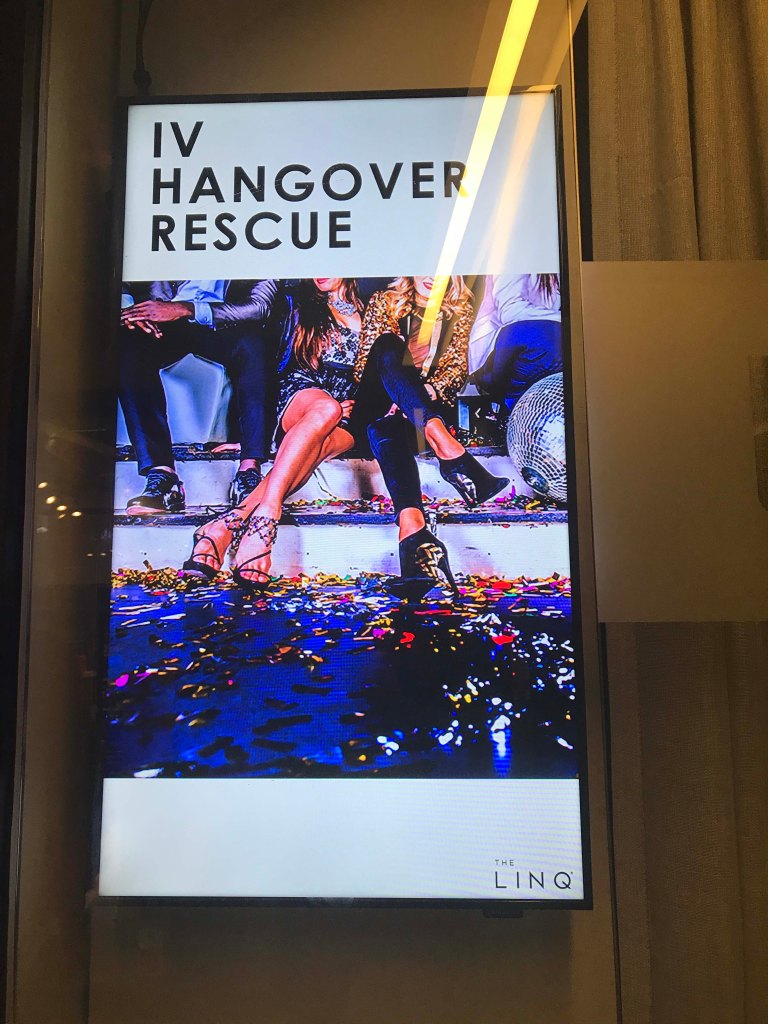 I have seen this on TV, but it was interesting to see in person. IV bags with fluids and vitamins for those who are seriously hungover. The price starts at $28

This is the “Rat Pack” corner of Sammy Davis Jr, Dean Martin, and Frank Sinatra Boulevard’s. Lee got a kick out of it, and you can just barely see all three signs in the picture.