Before I get started I wanted to share a picture of the view right outside Howard an Linda’s campsite.  Once they walk through the trees down by the lake this is what they see.  Pretty cool!

Ok back to the story.  I left off with us finishing paddling Trillium Lake, and we all decided to head to Timberline Lodge for lunch.  Several people had recommended the lodge for fine dining, and since we all love a good meal we decided to splurge and try it out.  We decided to hedge our bets though and go for lunch since the prices were crazy expensive and at least they had a lunch buffet with a fixed price.  Since we have been disappointed numerous times in the last several years with dining out, I told H&L it was totally up to them if they wanted to stay and eat there.  Linda wanted to check the lodge out anyways since the exteriors for the movie The Shining were shot there, so we all decided to decide once we were on site.

The drive up was pretty, and the temperatures dropped from 81 degrees to 67 degrees with the relatively short 6 mile drive.  I was surprised by how much activity was going on up there on a Wednesday, but since there was still some snow, several people were skiing or snowboarding.  That was an interesting change going from paddling in barefoot to seeing people in full snow outfits, and that’s part of the fun of living out here in Oregon. 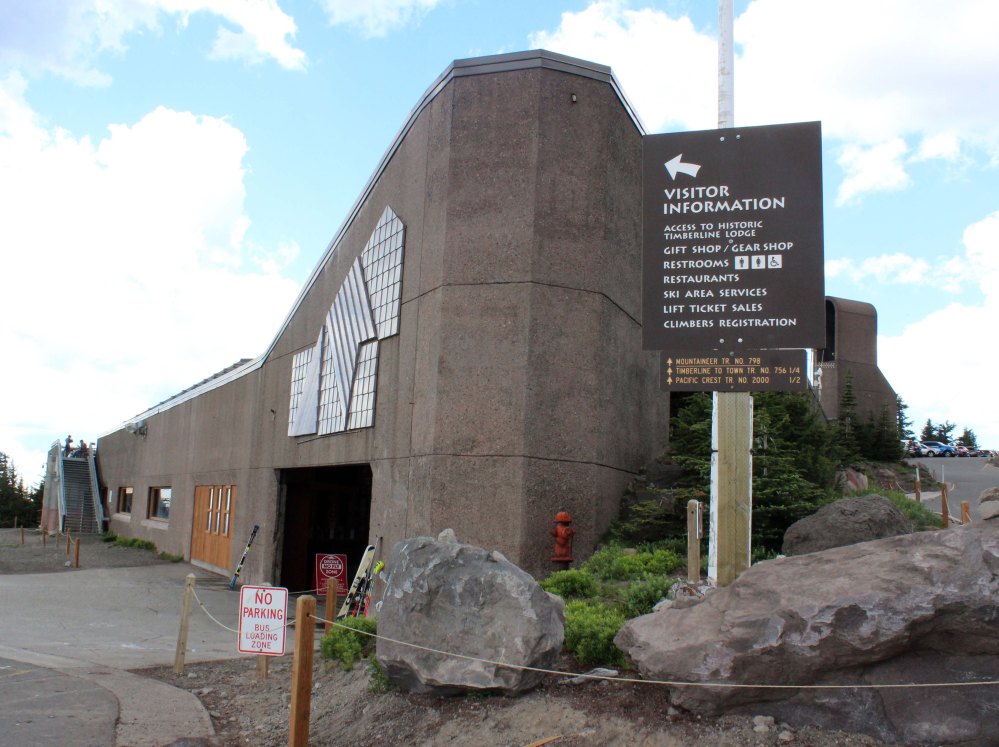 Ski area with some shops 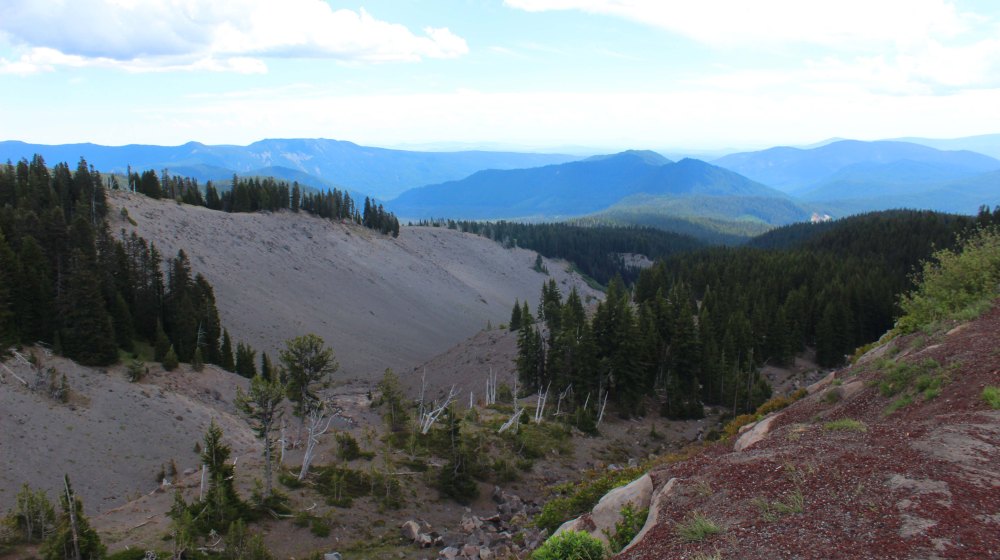 The view from up top..the pic really doesn’t do it justice. It’s worth the drive for the view alone

Close up of the mountain top right behind the lodge

I have never seen The Shining (I am not a scary movie person), so the outside didn’t do much for me, but I did like the fact that it was an historic hotel and the circular, multiple story fireplace inside and some of the carved wooden banisters were pretty cool.  We wandered our way through the hotel and eventually found the Cascade Dining Room which had a lunch buffet.  As soon as we walked in we noticed that the windows all had plastic sheeting on them and men were actively working on the facade outside.  We all kind of looked at each other and briefly talked about whether we should leave, but since we were really hungry we decided to stay. 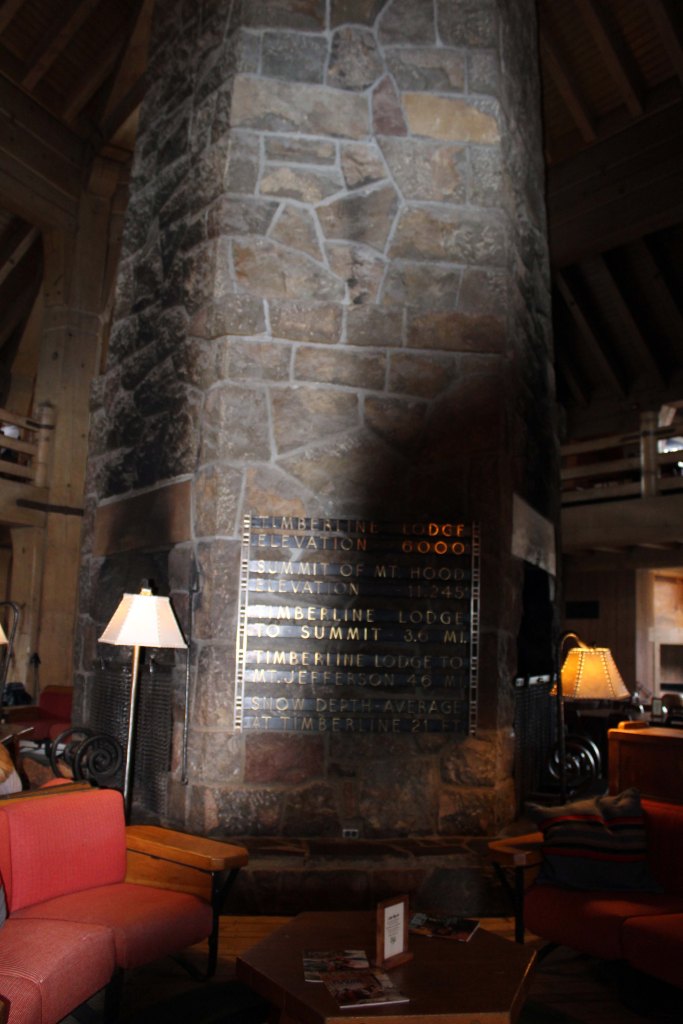 Loved this fireplace, couldn’t take a picture that did it justice

The Cascade Dining room is actually really small. We asked if there was outside seating but there was none.  Our table was right behind the woman with the blonde hair on the right. 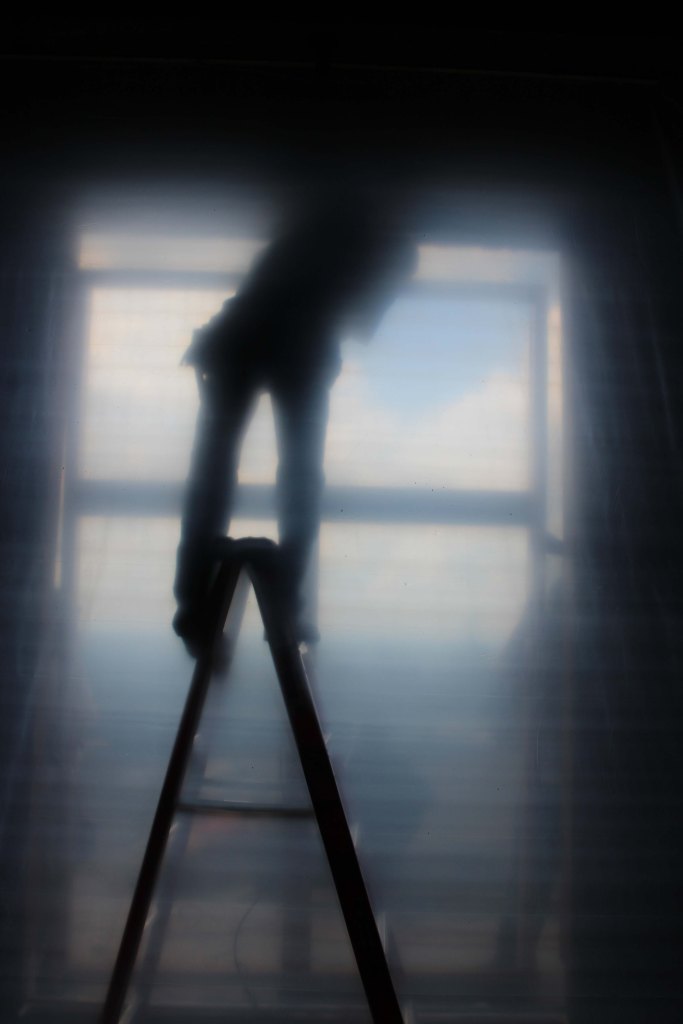 And this was right next to us.

The construction didn’t really bother me that much, I understand they have a limited season to work on this kind of stuff, but right after we sat down the banging started.  This wasn’t just painting or screwing things in, but sawing and hammering that was so loud we frequently had to stop our conversation.  Towards the end there was sustained drilling noise that reminded me of being at the dentist and I actually put my hands over my ears.  It was pretty ridiculous, but don’t take my word for it, Lee shot some video to share with you.

We all laughed though about the “ghostly figures”and random banging noises though and honestly if the food had been great we probably would have been fine.  Unfortunately that was not the case and not only was the food mediocre in some cases it was downright inedible.  Howard and I split a brownie, for instance, and we both took a bite and spit it out.  Linda asked, “How do you screw up a brownie,” which was an excellent point and gives you an idea of how the menu was.  There was a very small selection and only a few items were any good at all.  I liked the roasted carrots and the yukon garlic potatoes, but the roast beef was super bland and the “salads” they provided were all pretty unappetizing.

Salads…they tasted about as good as they looked which tells you something.

Charcutterie…I had some cheddar cheese cubes I think. 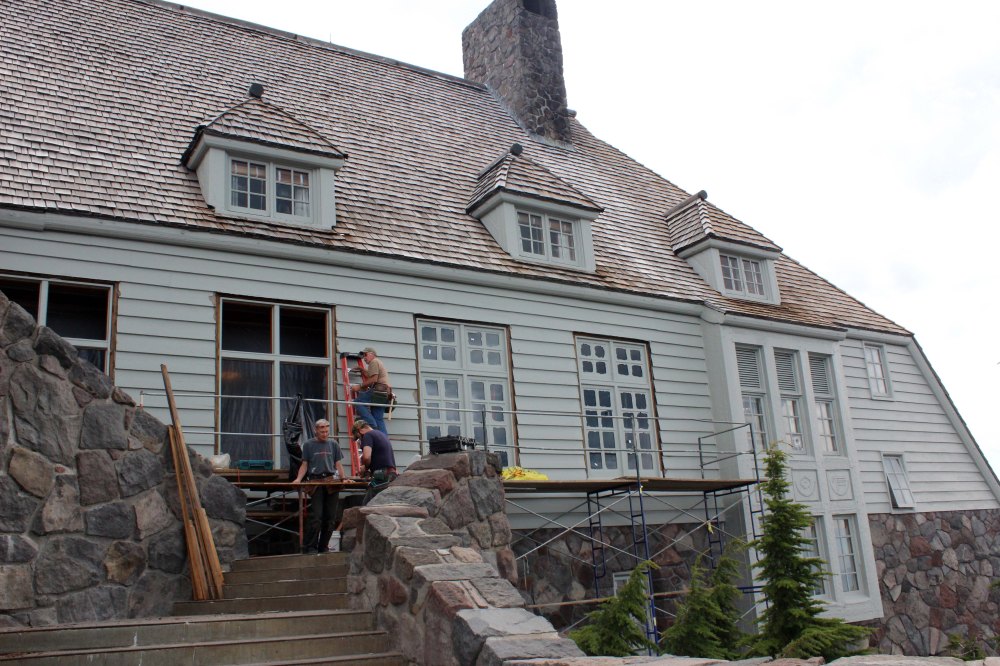 Later we saw the guys working from the outside.

And just to be clear here, it’s not that I didn’t “get” the food.  We have all eaten in many high end restaurants and it wasn’t that it was too fancy, it just didn’t taste good.  The best thing on the bar was a waffle iron to make your own waffles.  They tasted pretty good, but the only toppings provided were butter and syrup.  My biggest disappointment was the desert section. Of the 7 different mini deserts I tried, I only liked one.  I think the thing that bother us all the most was that the buffet cost $25 dollars a person.  Lee had a soda which was $3.50 and my ice tea (which was quite good) was an additional $4.  At the end of the meal, Howard asked for an ambiance discount and amazingly the waitress gave us $5 off.  It never hurts to ask for that sort of thing, although I rarely do, and we all felt a little better when we got a discount.  Still I think this was all important enough to focus an entire blog post on it, because several people I work with are talking about going their for anniversaries, etc.  From all accounts you can easily drop $100 on dinner for two at the lodge, and I want to make sure people are coming close to getting what they are paying for.

The only good thing that came from the experience, is we all laughed quite a bit and we will forever have a story to share.  hopefully we will all meet up in our 80’s someday and talk about that time we ate at that god awful haunted restaurant! Next up is back to nature, with a hike to Little Crater.  That was much more fun and cost us exactly $0, which tells you something.  In the last four years, nature has rarely disappointed us and generally costs very little.  Restaurants almost always disappoint and are pretty expensive.  we really should just stick to nature!