Originally we were going to wake up really early and take the shuttle bus, but the travel and excitement of the last several days finally caught up with me. Lee, seeing how tired I was suggested we flip the schedule and instead take the scenic drive today and then get up early to do the shuttle bus and hikes tomorrow.  This meant I could sleep in (which I did until 9am) and then we could take our time in the morning with the intention of leaving after lunch.  The plan worked beautifully and we ended up arriving at Zion around 12:30pm.  Although the parking lots were full, that was OK with us since we were planning on taking the drive.  And since we didn’t need the shuttle (I heard the lines were 2 hours long at that point), all that really mattered was the line at the tunnel.  That ended up being about a 10 minute wait, which in the grand scheme of things really wasn’t that bad.  I did think it was interesting that the line seemed to never allow cars on both sides, and I definitely felt the $15 was on the steep side if they were going to do one way traffic anyway.  That being said the $15 (for a dually, RV, or bus) was totally worth it as I think you will see from this post. (I’m including short video clips of the drive as we go along. Sometimes movement and a sense of scale and perspective help where pictures can’t do things justice. As always, the videos look better full screen, in HD. – Lee)

Before reaching the tunnel we stopped and took a picture of Zion Arch which we totally missed yesterday because it was largely in shadow. Really neat.

There are holes cut in the tunnel walls, but you cant stop to look at.

(Here’s a clip of the drive through the tunnel, with the dark parts sped up to 600%, but the gallery holes left intact. – Lee)

There are a lot of parked cars right when you come out of the tunnel because it is a popular hike trailhead. But the further we got to the other end the lighter the traffic was 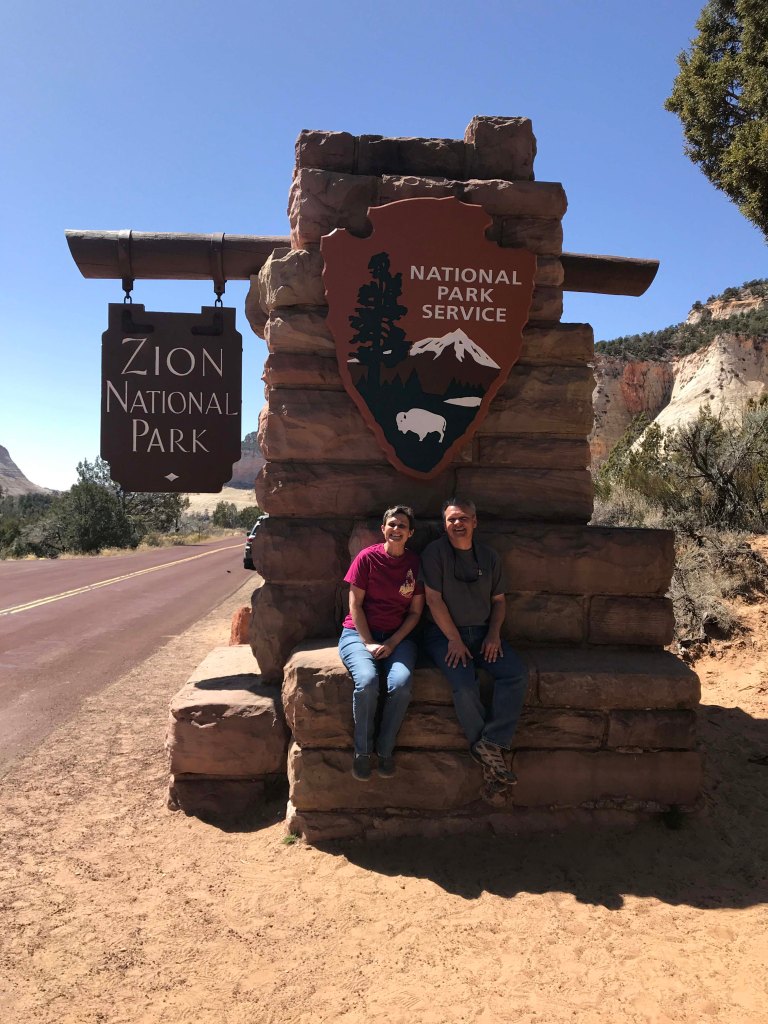 When I talk about scenic drives that is a bit of a misnomer, because we stop and walk frequently on those drives.  It took us 4 hours to go 6 miles on this particular road, and that wasn’t because of traffic.  We like “interactive” drives very much and enjoy choosing where to explore.  That way we can both cover a lot of ground for the big scenic views and get up close and personal when something is interesting. I would say on this drive we definitely walked 3-5 miles and we could make our own path, which I liked very much.   The first place we stopped on this drive was at the second tunnel, and it was then I realized I still had my Skechers shoes on, I just spaced and forgot to put on my hiking shoes.  They had zero tread, and are obviously not the best choice, but we made it work and Lee helped me on any slippery places.

The second tunnel. No idea how tall it was

As you can see the traffic had significantly dropped off

Where we pulled over 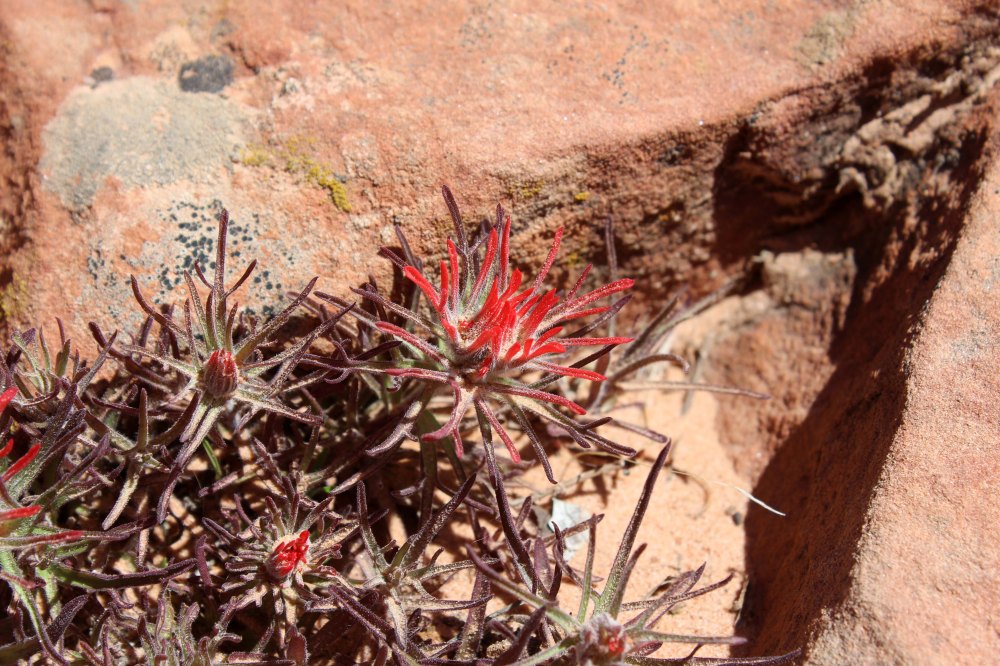 I loved all the green with the red rocks. Really great to see all that color 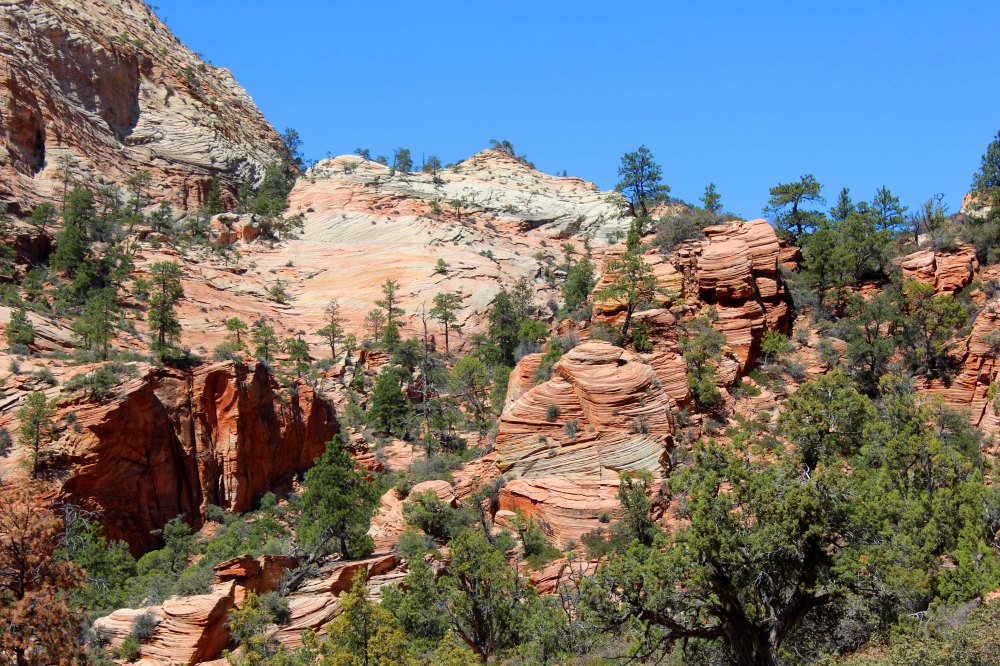 This twisty rock formation was so cool, but both of us tried to capture it and this was the best we could do. Waaay better than this in person and huge

Loved the striations in the rocks

Since we were at full sun the contrast between red and whites was pretty clear. We learned there are 7 layers of different rock in this canyon hence the different colors.  The red comes from iron by the way.

Our next stop was at the pit toilets at a large pullout, sorry that’s the best way to describe it, and we were looking at the rocks and decided to walk down a bit.  Lee saw a dry creek bed and helped me down with my slippery shoes and it was a really neat dry riverbed canyon.  My friends have been worried that I might get claustrophobic in the canyons, but I did just fine.  The fact that there was no “ceiling” helped me quite a bit.  It’s a good thing too because Lee loved walking in the canyon and I can see tons of these in my future.  One important note here is it is VERY important you never walk in these if there is any possibility of rain.  Flash floods kill people every year, so be very careful before entering. 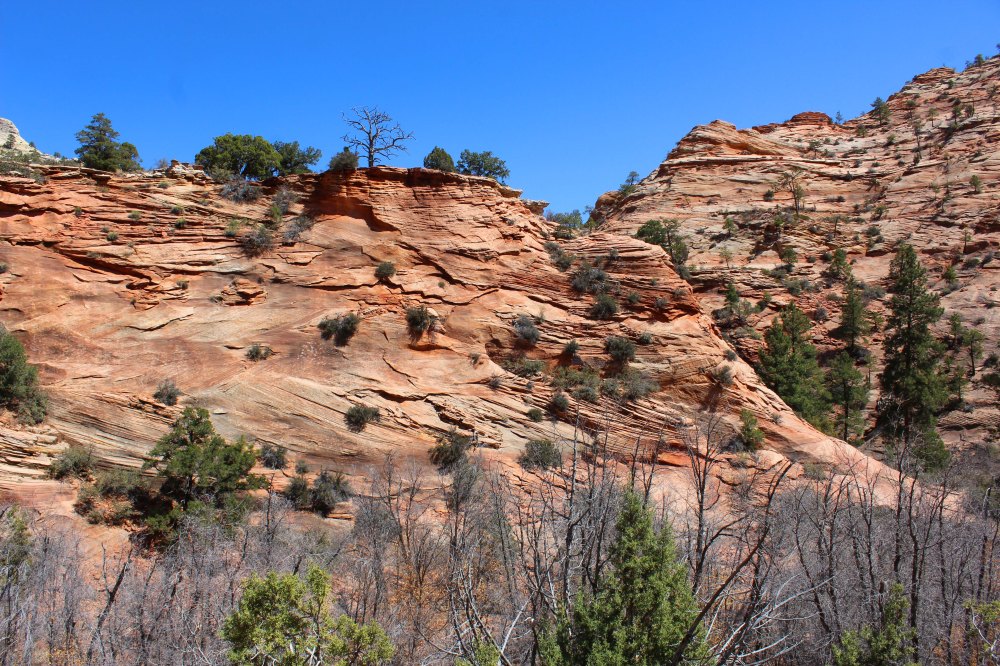 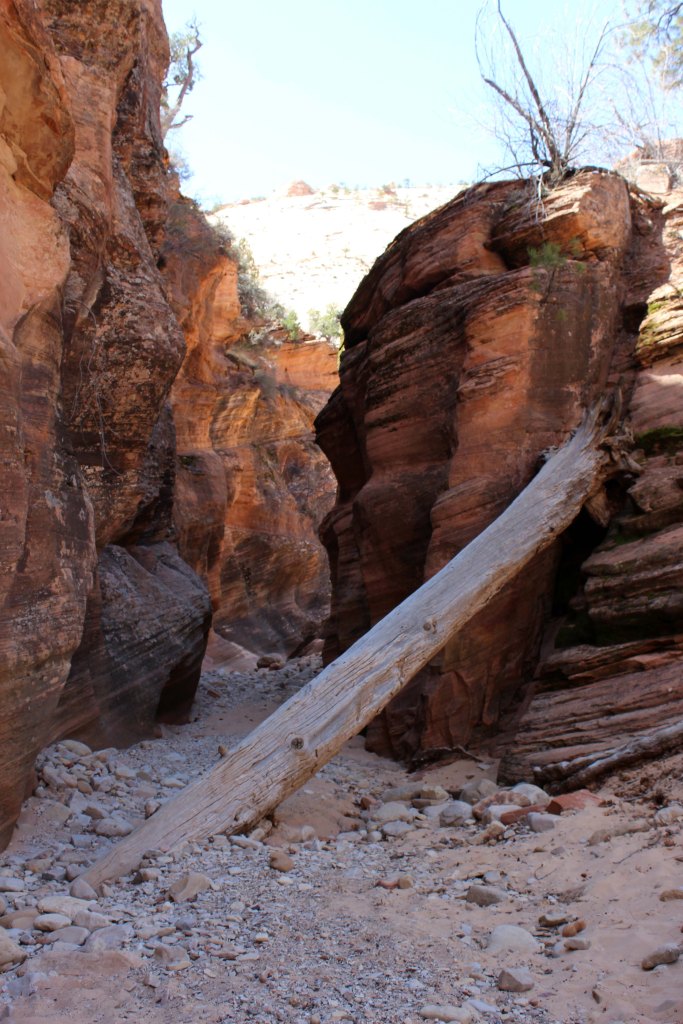 When we reached the river bed

The folds in one part of the canyon were amazing 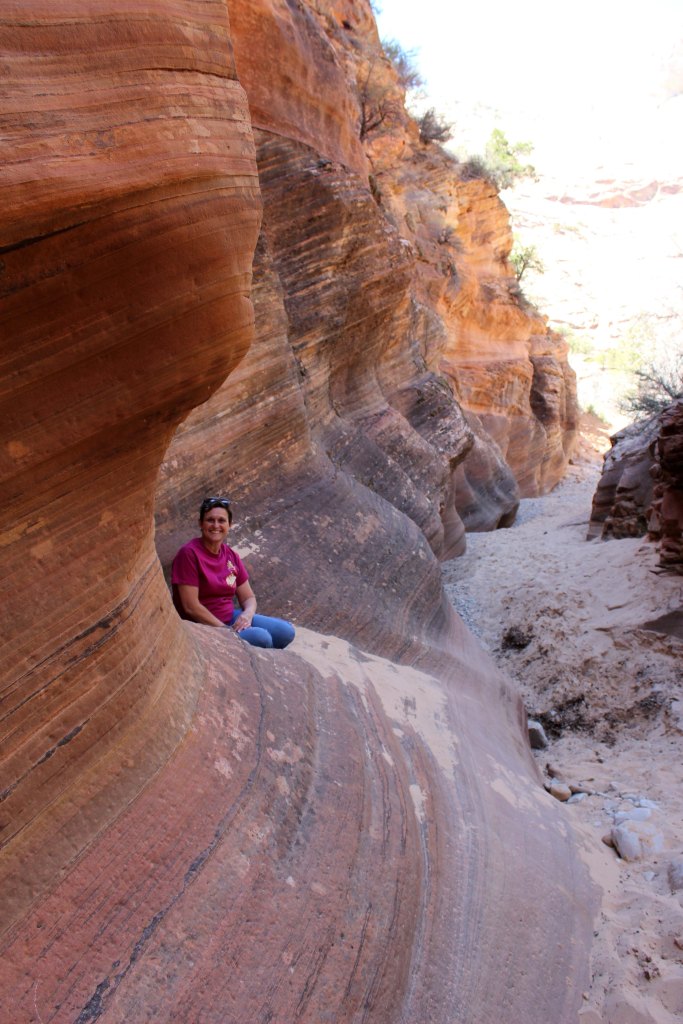 And I loved these rounded sides 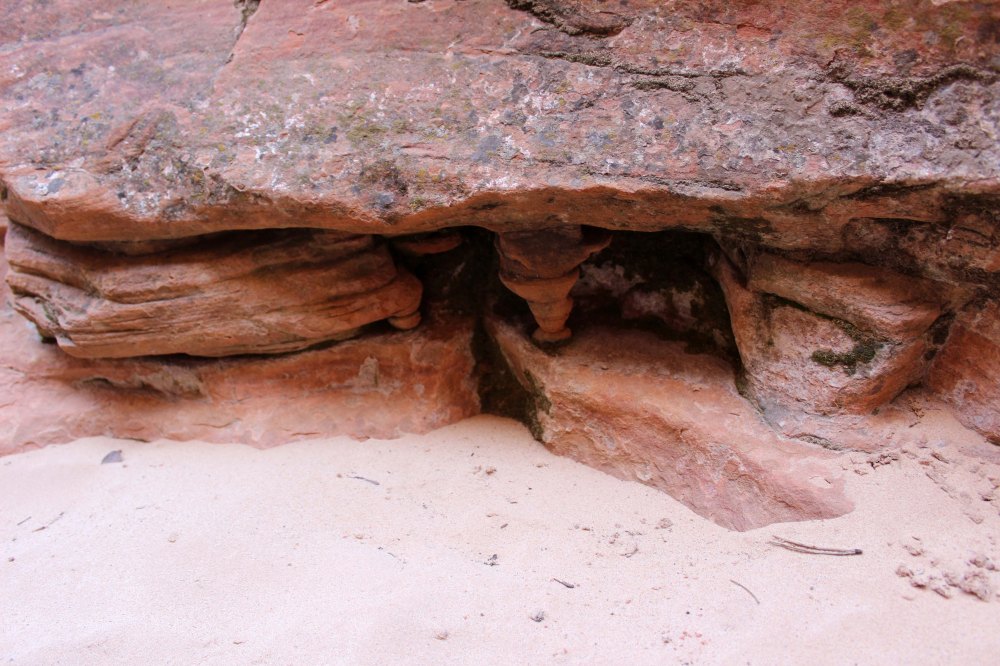 This little curly que rock was at the base and was amazing. Water is such a powerful element and what beauty it creates.

One of the most famous rocks is the checkerboard mesa, which Lee was fascinated with, and it was huge, but the pattern didn’t do much for me.  I like the curly rocks better. 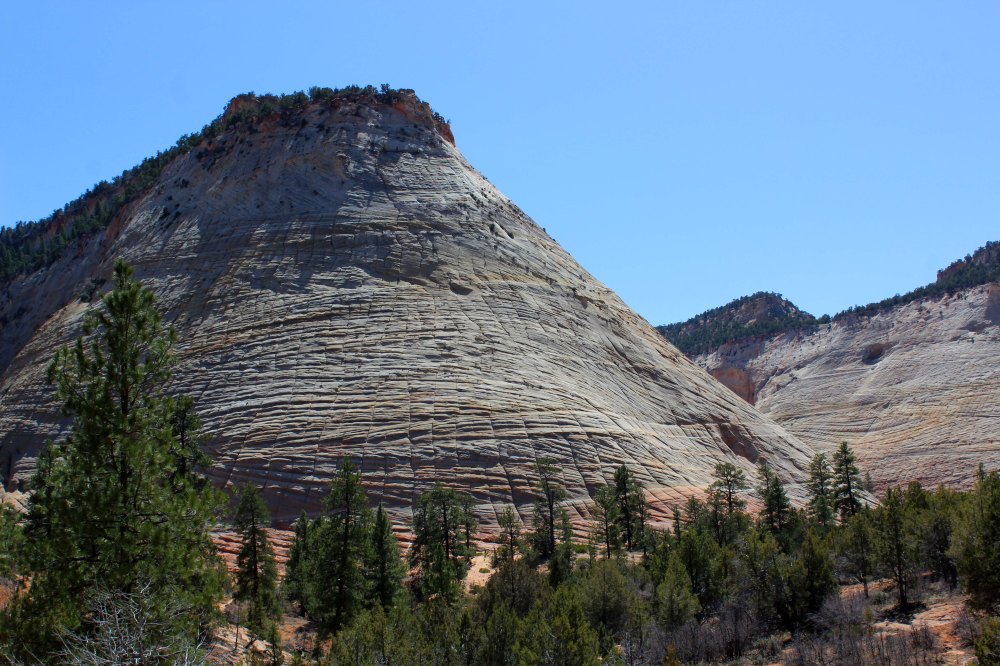 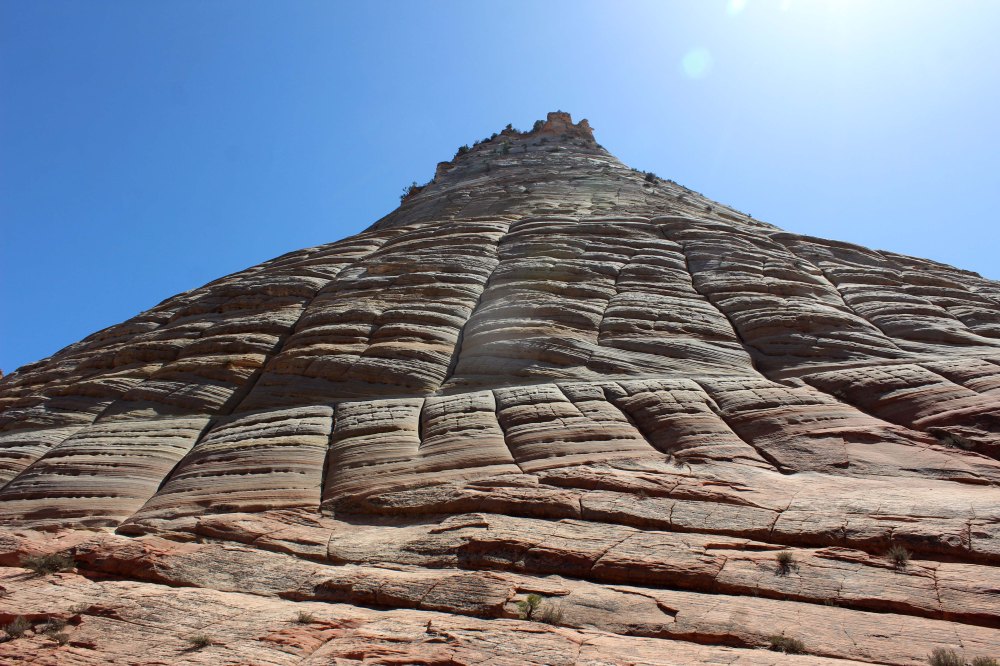 Our best stop was coming back when Lee saw several HooDoos in the distance.  The walk was steep, but really worth it, because this group of natural rock formations was amazing.  Great place to have lunch, if the timing is right and there are several places you can walk to it from.  We saw people stopped and walking in lots of places, but once we got away from the entrance it never felt crowded, unlike the hikes we took in Zion the next day.

This is what caught Lee’s attention from the road

When we got closer

I climbed right up these rocks to sit near the tree. It was a steep drop down, but cool picture 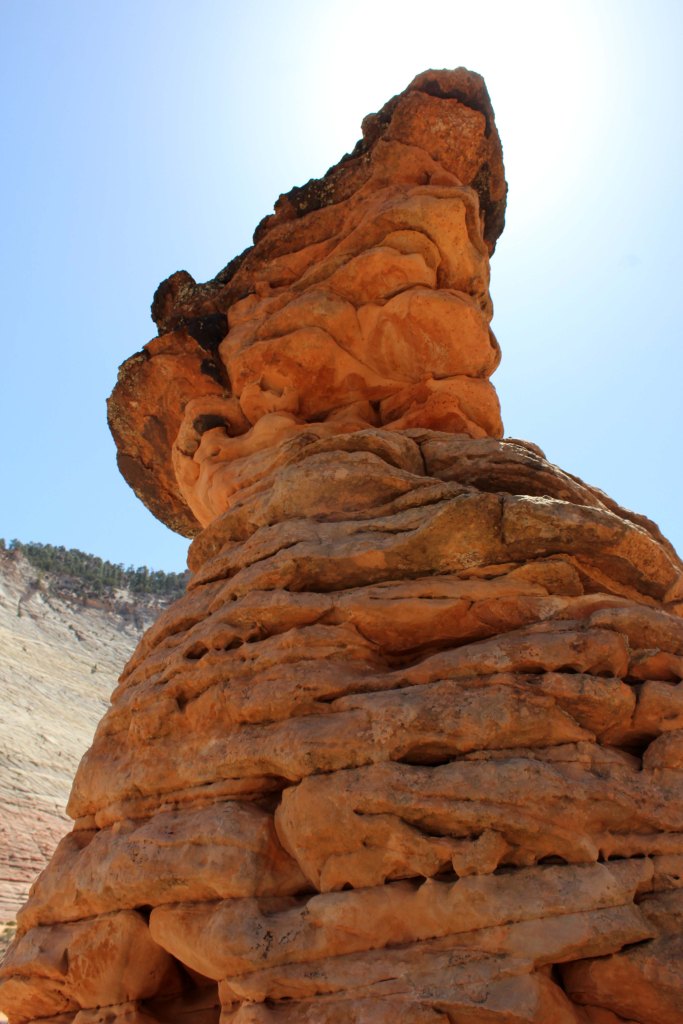 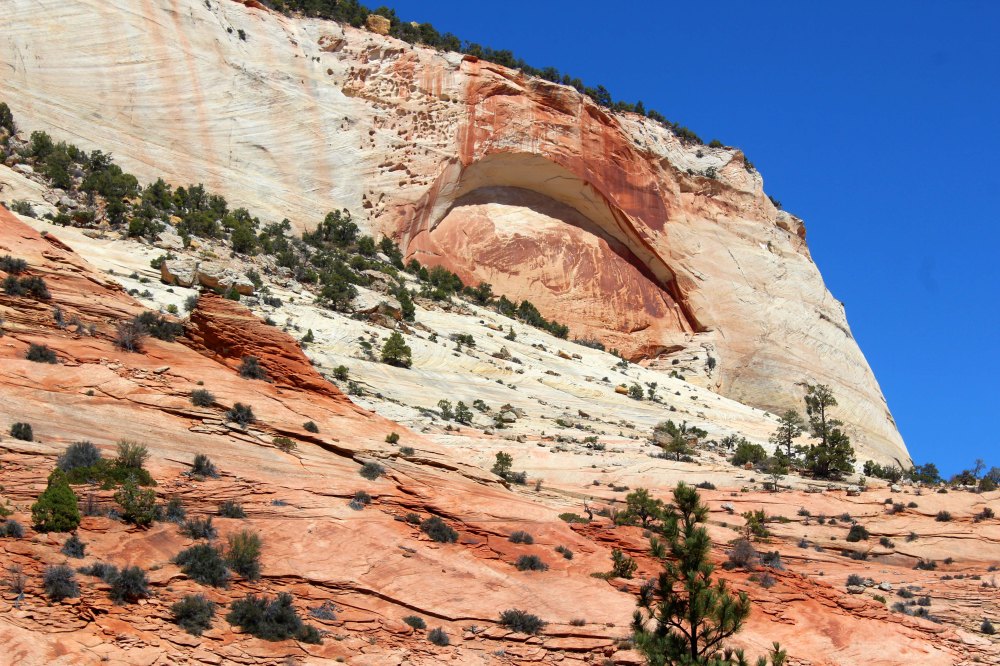 We stopped one more time on the way back and this was to look at an even deeper canyon.  I was really worried about getting down this one in the slippery shoes, but Lee helped me every step of the way and thankfully we made it.  Ironically at the other end, we found a much easier way up. Can’t complain about the pictures though.  It’s easy to be photogenic in a canyon 🙂

Lee saw this from the top and decided he wanted to go down…because sure, that’s what people do 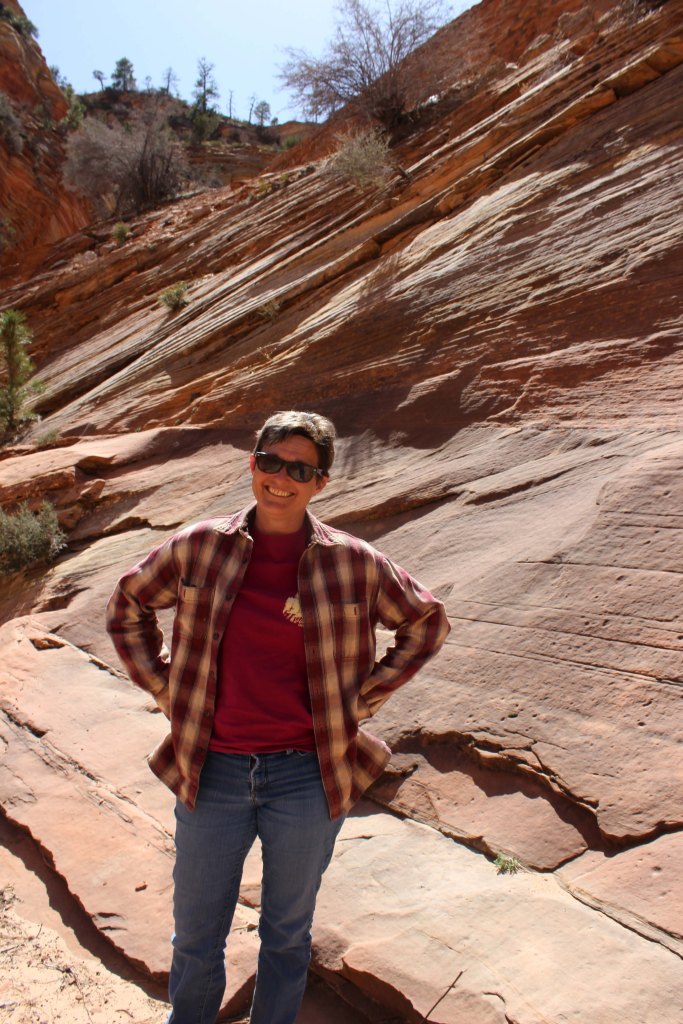 This is what I looked like once we got down the rocks you can see behind me. Still not sure how we did it

Walking carefully in my slippery shoes. The creek bed was actually the hardest part because the rocks are so smooth.

These walls were much higher

One more thing as we were leaving we saw one flowering tree in a crack between the road and a wall.  It was really beautiful and no clue how it got there, since it was the only one we saw like it in the park.  All in all it was one of our favorite scenic drives and if you have been following along you know that is saying something.  I think you can do a couple of hikes and the scenic drive all in one day (more on that in the hikes post in a few days), but if you have to choose I would absolutely do the drive and get out and explore.

This one tree amazing

The line as we were waiting to exit the tunnel. I didn’t mind waiting with that view.

(For those who can’t stand to not see the whole thing, here’s the entire scenic drive, compressed from two hours to a mere seven minutes. – Lee)

(And for anyone interested, here’s a quick video of the end of the day, showing the drive from 89 to our boondocking spot, with the boring bouncy bits sped up to 1000%, just to make them go by a little faster. It will at least give you an idea of how far off the road we were, and how sparsely populated this dispersed camping area was. – Lee)