We are both ready to take a break because the constant cold and drizzle is wearing us down.  Plus traffic has been pretty busy, but finally they took the big coil out yesterday.  One nice thing that happened was that crew had a big meal and they stopped at the gate and shared some steaks with us.  The cooker they pulled on a trailer was pretty neat and they had ribeyes that were braised in hickory flavored juice in big pans and I just grabbed a couple right out of there.  Lee was pretty happy because hey free steak and it was a nice thought that they shared with us.

The next day they started the workover portion and then after that the cleanup.  We heard that might take 3-4 days, but everyone we ask seems to have a different guess on that.   It seemed like lots was happening from the volume of traffic the gate was getting, but when my generator ran out of gas at 1am and I flagged down someone to get me some more gas, I learned that wasn’t the case.  The way I understand it the well has to be stable before they finish it and this one is still bleeding off lots of natural gas.  That makes sense, but then I learned that they weren’t sure when it would be ready. Once the well is stable they need two 12 hour days to complete the job but the big question is when it will be stable.  I still really don’t get it to be honest.  Sometimes I feel like everyone is speaking a foreign language and since we can’t see anything from this far away it’s hard for me to understand what is happening.  but we are getting paid and I had a pretty slow night, so that’s something.

One thing we did see for a couple days was a big ball of flame.  That was a bit of surprise when I walked out one night, but I later learned this was the natural gas burning off.

What I could see at night

The cows didn’t seem to care 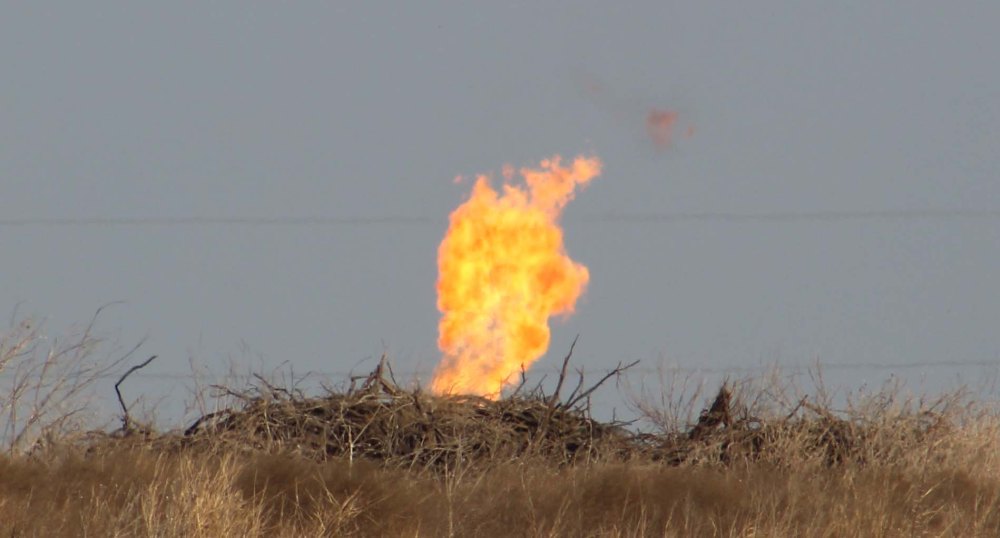 The next couple of days and nights were relatively slow as well as we watched the workover phase get completed.  Since this was a completely different group of people, we weren’t really sure who was in charge, but Saturday morning one of the company men said they were close to being done.  Lee was told we would be done at noon that day, but then no one came and told us to leave.  We let our sales manager know that the phase was complete, but she asked if the gate was closed which we did not know.  Around 6pm our supervisor called us and asked if we had been released but again we said no.  There was no one back at the well and the gate to it was locked shut, but as far as we knew we were on duty.  I only had a few production trucks going to other wells, but went ahead and stayed awake.  I wasn’t sure what the traffic would be like and ultimately I thought it best not to mess with my sleep schedule.

Under normal circumstances we would have been totally fine for that, because getting paid for these slow days is awesome, but we have friends in San Antonio that we really wanted to see and were hoping we would have a few days to spend with them.  We decided to go ahead and prep the rig for moving, in case we were released suddenly and then I had an extremely slow night, which was pretty great, because it allowed me to get a lot of writing done.  I’ve been making some serious progress with the editing and seem to have found a rhythm, but I have also decided I need to write a little bit further before I end.  I never expected this book would cover our entire full-timing journey and I think a nice place to stop is right before we went to Alaska and started work kamping.  There’s some symmetry to that since we started with an RV-Dreams rally and it will end with another one, but that does mean I had to add some additional chapters.

After doing some research I learned that most novels are between 60K – 80K words.  I am at 45K currently, but by adding the additional few months should get there.  This book was always about filling the gaps in the blog, especially things that happened in the beginning, but I also want it to be a standalone work so that someone who never read the blog would understand our journey.  That’s a delicate balance since  I don’t want to be too repetitive for those of you who have read the blog from the beginning, but hopefully there will be enough original material (and the perspective from someone who has been on the road three years) that it will still be interesting.  As I mentioned before I am relying very heavily on my oldest daughter to give me feedback on content and flow.  She obviously knows the story and has been reading since the beginning and if she doesn’t find it confusing or boring, hopefully no one else will!

After workover was complete they started another phase and they were trying to “get the oil to flow.”  Once again this was a completely different group of people, and Lee was pretty busy all day. This crew ended up working past 9pm, which we were told is unusual,  because it rained (and hailed) on and off throughout the day and they were “fighting with the mud.”  Again we weren’t sure what the status was and the people we asked weren’t sure either.  Lee had the bulk of the traffic and since it was raining so hard he pulled the truck up and worked out of there for awhile. I got lucky and it stopped raining by the time I took over at 4pm. 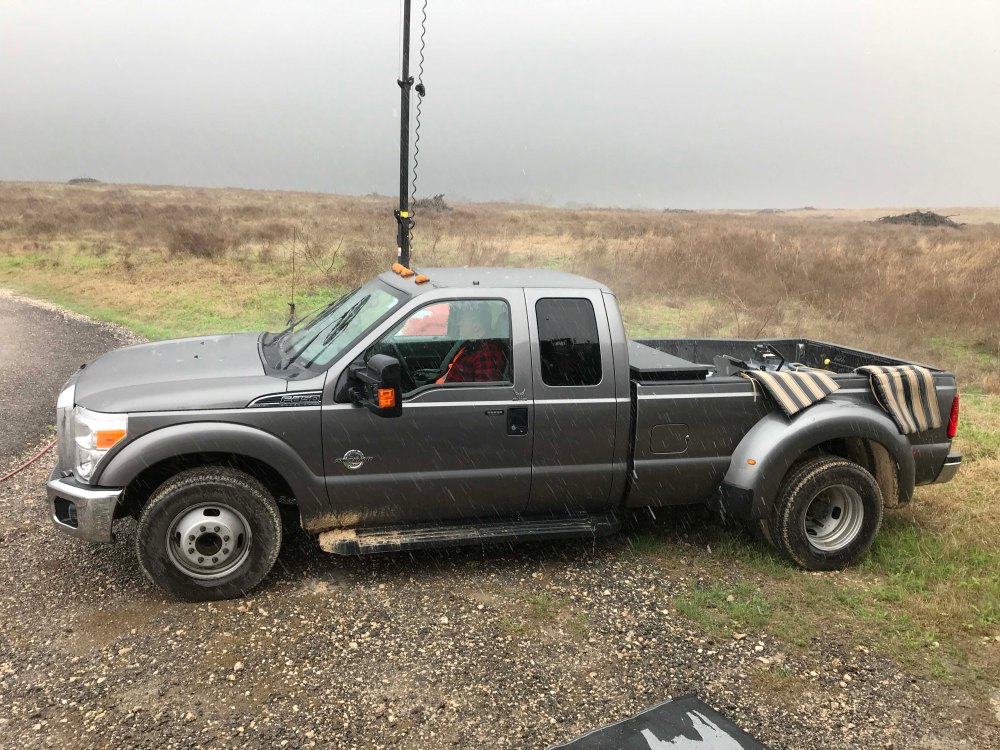 Lee working out out of the truck.  You can kind of see how hard it was raining in the picture.

I was able to talk to the last company man before he left the site and he said the oil would start flowing tomorrow or the next day.  Then he said we would probably be here a few days after that which again confused me. The last gate we were released before any of these stages started, but we do know every landowner contract is different.  At this point, we are just riding this out, enjoying the slower volume days, and hoping we get done so we can see our friends before they all leave on March 1st and head to Arizona.  We would have people come down so we could make sure we saw them, but not knowing day to day when we will released that doesn’t make much sense.  So we are just going to ride it out and hope for the best and hey at least we are making money instead of spending it at a campground.

After a couple more days of talking to people who all seemed surprised we were still there, and hearing that the oil was flowing we finally got a text from our sales manager.  The construction company had decided to keep us because they were doing some work on another well and we were getting extended.  Even though it was shame we didn’t get to see everyone, it probably is for the best because we are hoping this extension will carry us close to the time we need to leave for the reunion rally.  We were a little concerned that it would be hard to get another gate with such a close end date so it really is a good thing we were asked to stay. The company man really likes us and mentioned briefly a couple of weeks ago that he might have some more work here.  I am guessing they decided to keep us over instead of having us leave and then getting another crew which is cool because we get paid for some relatively slow days.  I’m just glad we know now, so we can have our mail sent, which I have been holding off.  I want to get our taxes done before we head farther west so I don’t need to worry about that when we are enjoying our off time.

One more thing happened that was kind of interesting.  We got a call from our supervisor asking if we wanted to move to a $250 a day gate.  This gate is a busy one and has it’s own shack, and although the money was tempting the shack was not.  Many long-term/permanent gates have a small building that you work out of.  Sometimes you are allowed to keep your RV on the premises but other times you have to stay in a campground and pay for that cost out of the money you make.  Some people like those gates and they almost always pay at a premium, but we have discussed it and for us, that is not what we are looking for.  We like working out of our RV because it gives us easy access to all of our things.  Yes, we could still pop over when we needed to if the RV was on site, but we wouldn’t have ready access to our computer, TV etc. Theoretically we could use the laptop and another benefit would be during the time we were both awake one of us would be working in a separate space, but for us we would be giving up too much and at this point at least the extra money wouldn’t be worth it.  Again, personal preference.

The good thing was when Lee politely declined there truly was no issue.  As independent contractors we are allowed to take or reject jobs as we see fit and I will say every company we had dealt with has maintained that rule strictly.  They go to great pains to make it clear that there will be no penalty for refusing the work, which is a very good thing and appropriate with our 1099 status.  Plus as I have said before we really like this gate.  The paved area in front of rig has cut down on the dust tremendously and the easy access to town and strong internet is a terrific bonus.

5 thoughts on “Finishing Up?? Not So Much”