As much as we like gate guarding, it isn’t much fun when the weather is bad.  And we’ve had all sorts of this weather this week, with lots of rain, lots of wind, and some extremely cold nights.  Thankfully, for us, there was a bit of a technical issue at the well and the traffic was lower than usual, but it’s still pretty cold, especially during shift change when I am outside in the weather trying to write on paper.  If it’s not windy, we try to stay under the awning as much as possible , but when it’s raining and windy out in the elements we try to keep the paper dry as much as possible.  Still it’s not New England winter, and I think of that when I start to feel a little sorry for myself.  I just really prefer those nice, sunny days! 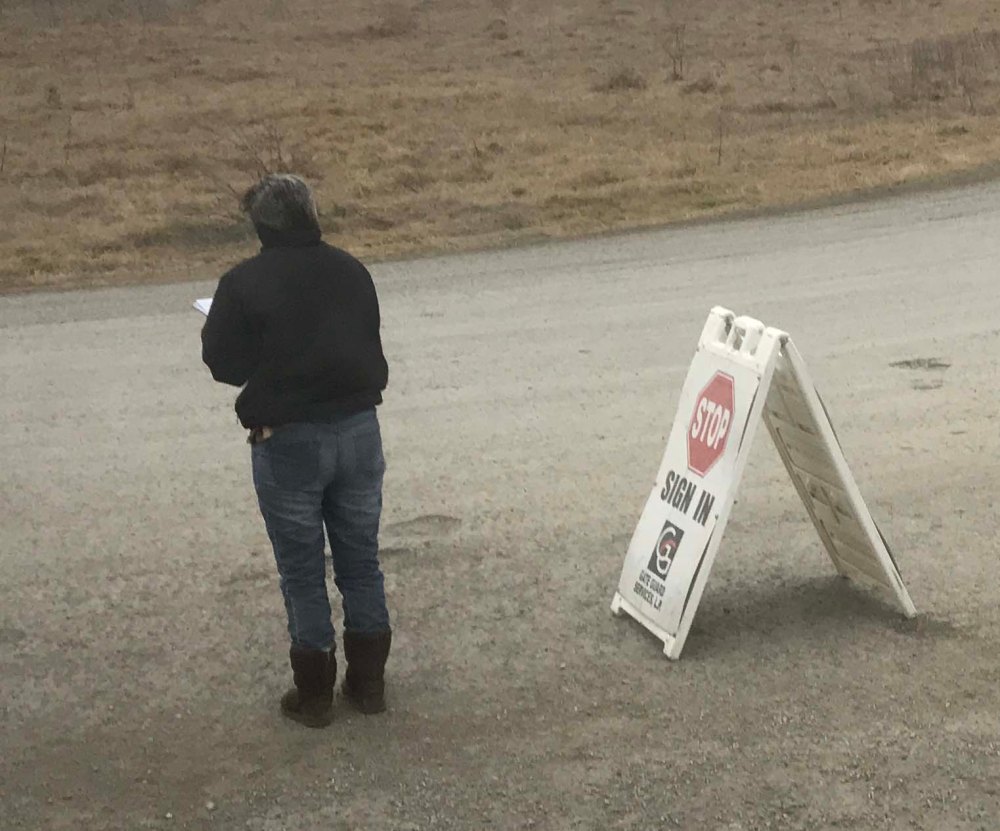 Here I am in long johns, gloves, winter coat, and ear muffs. The wind was tough this particular day.

We’ve stayed busy despite the bad weather.  I have really enjoyed watching the Olympics and we are getting some great coverage especially late at night while I am working, which is cool. The only down side is it’s on regular TV so there’s no pause button and I swear I won’t have a truck for 20 minutes then right in the middle of the American ice skaters I’ll get three 🙂 I did get to watch the Canadian ice dancers long program all the way through…absolutely amazing.   Lee also decided to do some work on the computer, including formatting and changing out our C drive, which is extremely time consuming.  He picked a Sunday (our slowest day) and started working on the changes.  I woke up a little early and things were a bit chaotic, but I appreciated that things seemed to be going well. 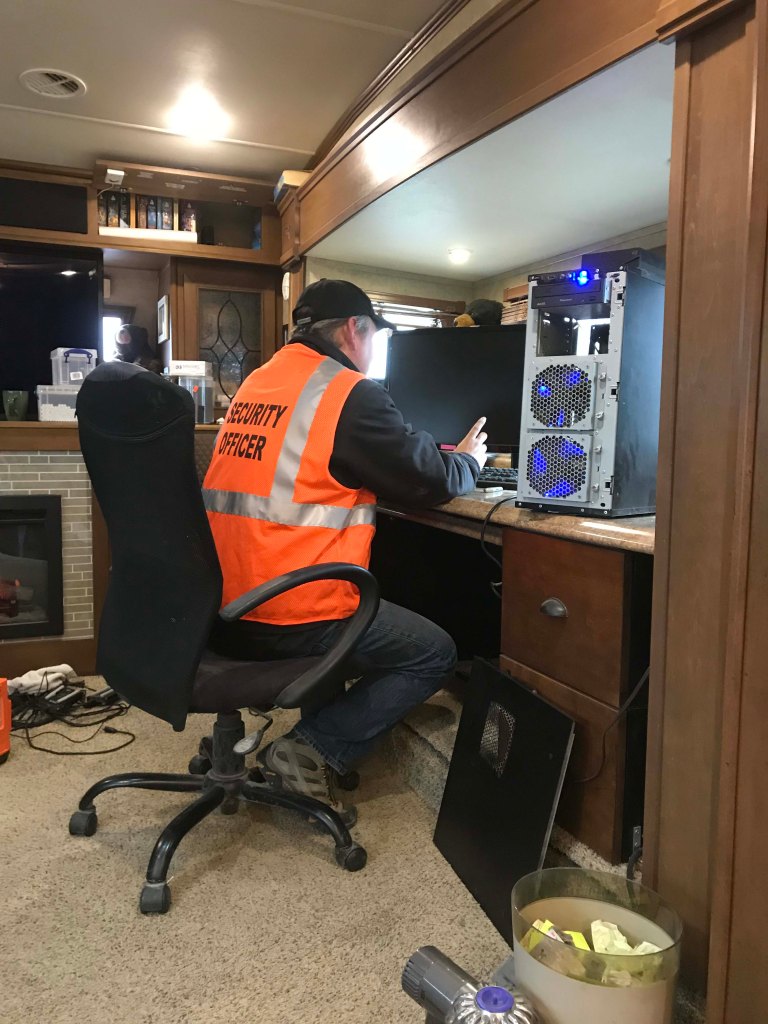 He was doing this and jumping up to take care of the gate. 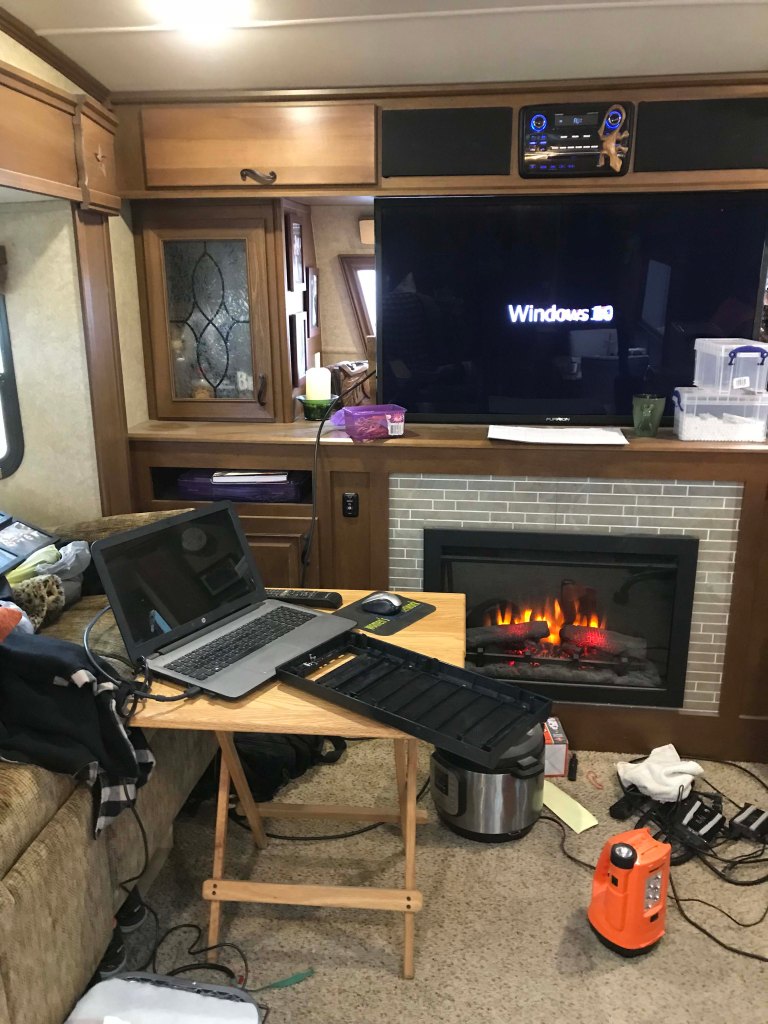 He was using the laptop and TV as a monitor 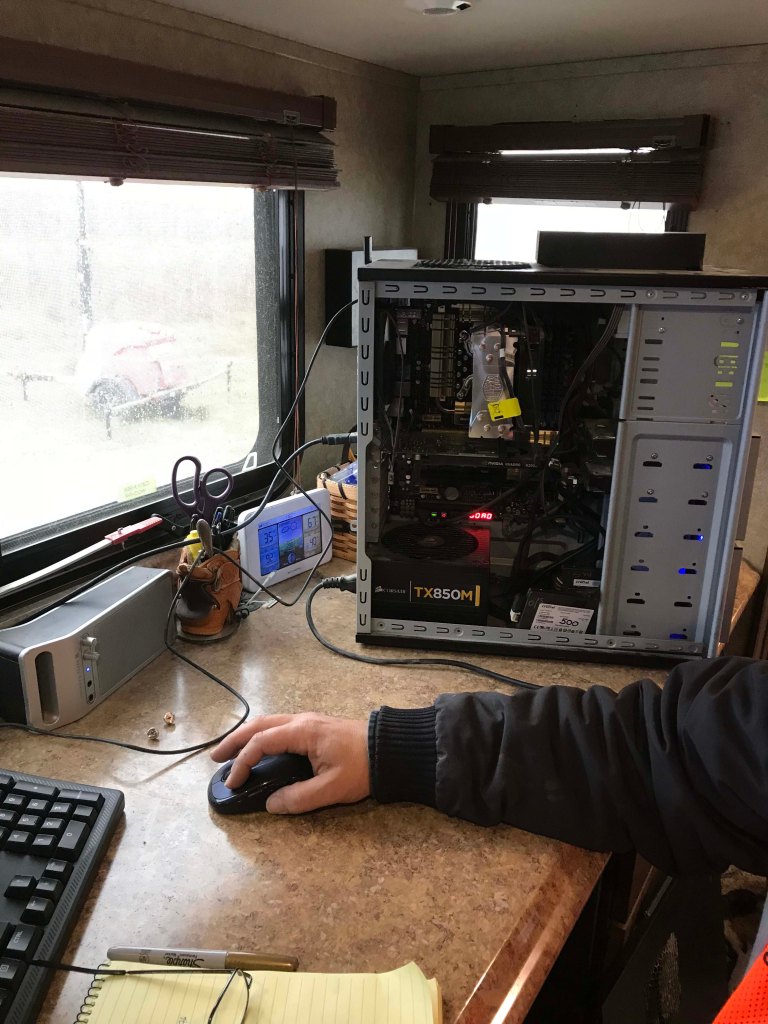 Good chance to clean everything out and move things around

So that went better than expected until we realized we had lost a file.  And that file was for my second recipe book.  I work off a special program so was forced to put the file in one place on the computer and that was the drive that was formatted.  I didn’t think to mention it and he didn’t recognize the file for what it was since it had a different name soooo long story short I lost about 70% of a completed book.  And yes, it was my only electronic copy and yes, that was pretty stupid, and boy was I upset about it.  But what are you going to do, so we started trying to figure out what we could salvage.  At the end I found a PDF I had run back in November so that leaves the recipes between now and then.  Two of those I found in the trash (thank heaven Jeremy’s chicken marsala recipe was still in there) and the rest I have the pictures in a backup file, but don’t have the actual recipes.  I’ll need to see if I can recreate what I did, and if not, well that’s just the way it goes.

I don’t feel cavalier about it in any way, but no one was hurt and it’s just “stuff” for lack of a better word.  It does represent hundreds of hours worth of work, which does sting, but hopefully I can find a way to recreate it with less effort.  I had the PDF, which I may try to edit in that file, because if I use the Bookwright program it will not allow me to copy and paste so I will have to hand type every recipe back into that program.  Anyway, I know people have bigger problems, but it was rough and I know Lee felt really bad, but really I should have had a backup file.  That’s on me.

Update:  Lee felt really bad about what happened and after we tried multiple programs to import the PDF we finally realized it would all need to be retyped.  Since I am not a huge fan of the Bookwright program, I tried to create the template in Microsoft Publisher.  I got pretty frustrated pretty quickly.  Creating templates from scratch was never my thing, so one morning while I was asleep, Lee not only created a template for me, but he also retyped every single recipe into the new format.  Wow…just wow. That was an incredibly generous thing to do and seriously made lemonade from the lemons.  So now I have almost everything from before, in a format I can use easily going forward, and I am only out a couple of recipes, which I am pretty sure I can recreate.  Really love that guy.

On a completely different side note, one positive thing is I finally finished listening to those training webinars and have all my Professional Development units finished.  Slogging through all of those was not fun, but now that it is done I can redirect that energy into the book about us going on the road.  I sent the first three edited chapters to my oldest daughter Kyrston and she really liked it, plus she gave me some valuable feedback which I can incorporate in.  I just need to quit avoiding the editing and commit to doing at least one chapter a day.  I also need to let go of the idea that it will be perfect, because perfection can be the enemy of achievement.  It’s a story, and yes it’s a bigger one than these blog posts, but at the end of the day it’s still just a story.  That’s what I need to keep in mind or it will never be good enough.

The high point of the week though was when Kelly and Bill came down to visit.  Bill has been doing solar installs, but he took one of his breaks to come and see us which was very nice.  Bill is working for RV Solar Solutions now and is an incredibly competent guy.  If you have been thinking about solar and need someone you can trust to do it, I highly recommend Bill. You can see his spring/summer schedule on the RV Solar website if you are interested. They brought pie and we made pork chops, potatoes, and corn and it was wonderful seeing them.  Plus traffic was pretty decent and the weather that day was a little milder so the guys hung outside and watched for trucks while I cooked. 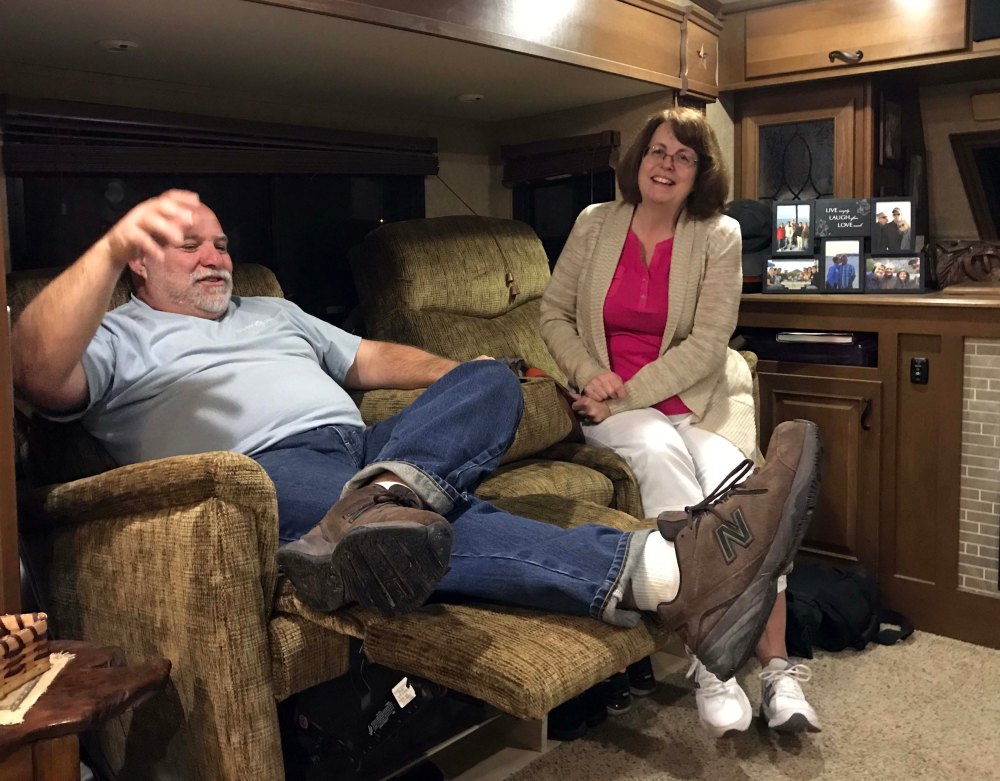 We did all get to talk inside a little bit 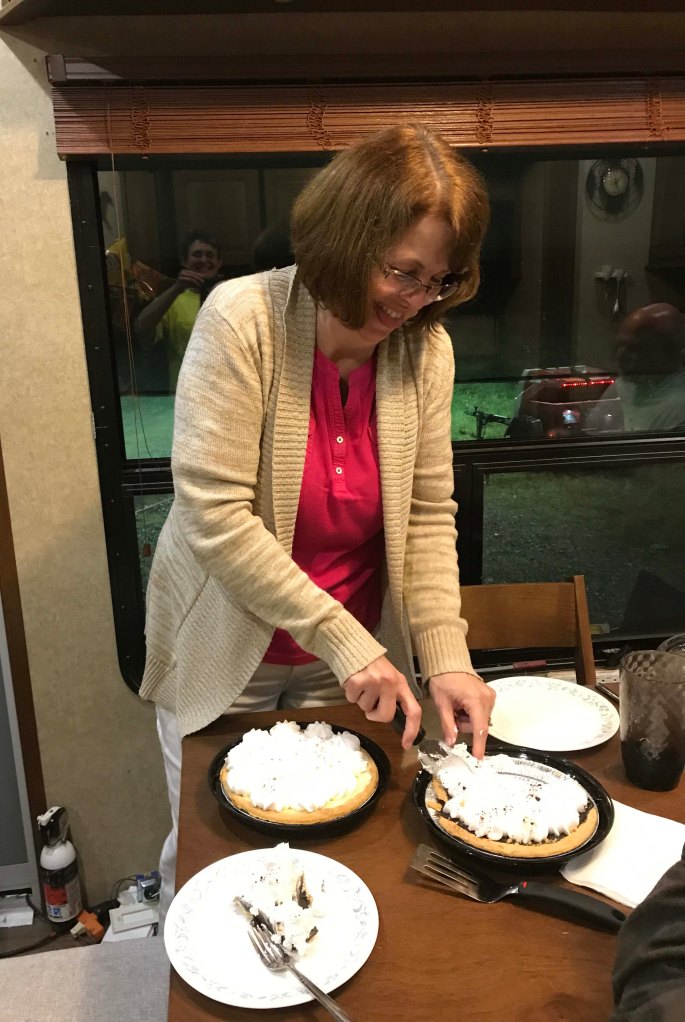 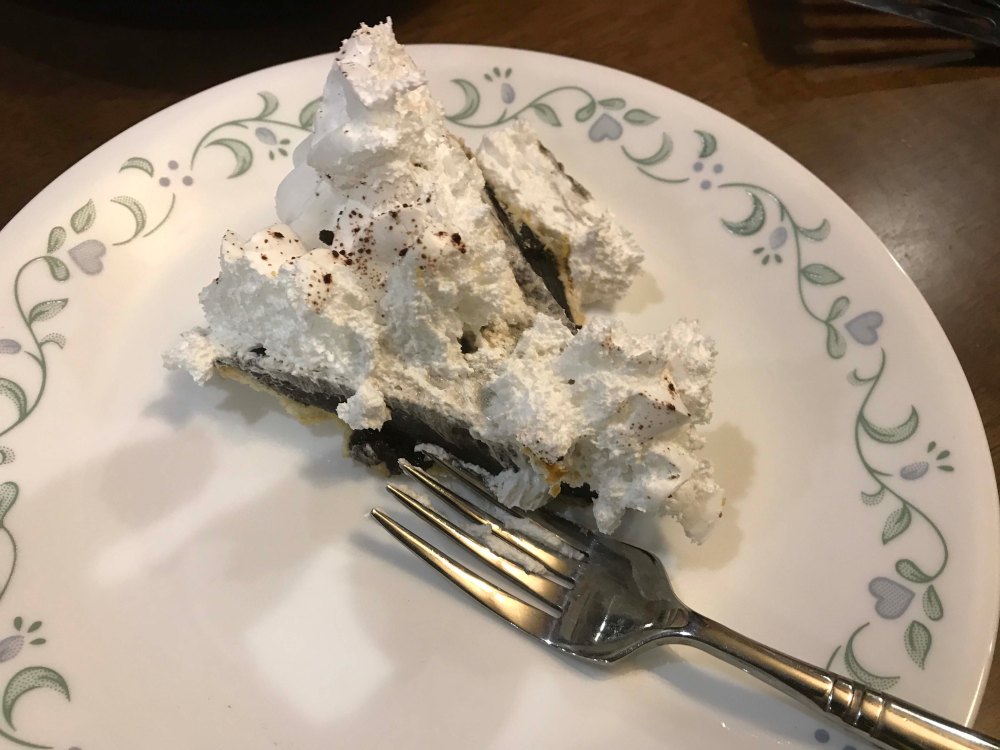 Which was really, really good 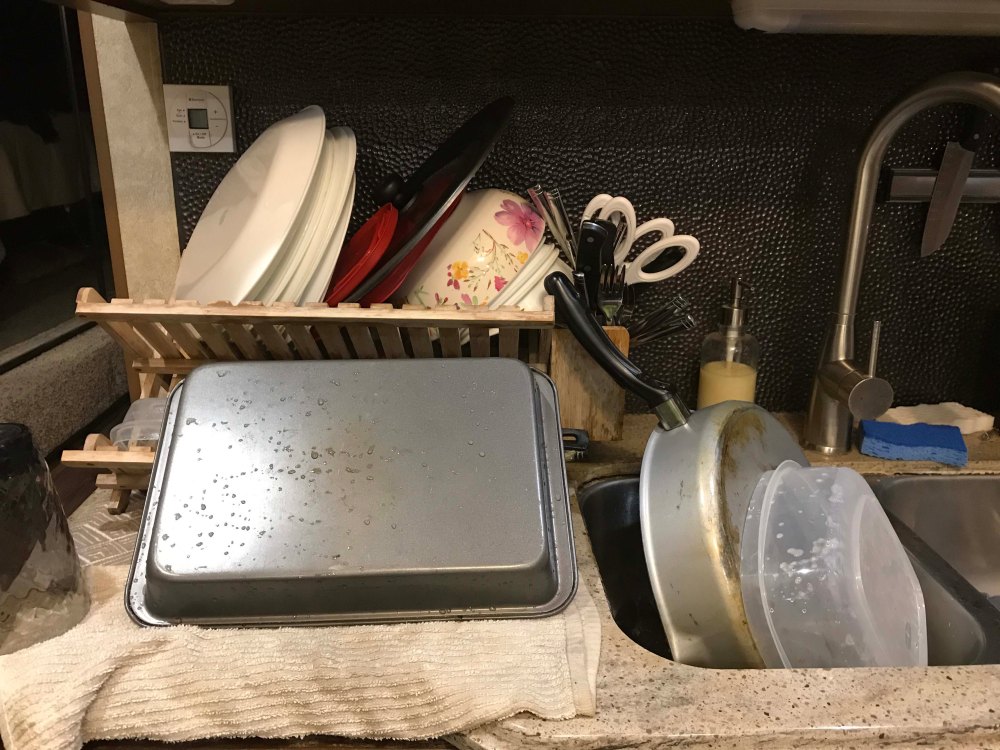 During dinner I was doing trucks and then dishes and she took over for me and finished them which was so, so sweet.

We really appreciated them making the 1 hour and 45 minute drive and being understanding about the truck traffic.  Hopefully we will get to see them before they head to Quartszite, but if not, definitely at the reunion rally!