After using the modified Milton Signal Bell for a few weeks I decided…..it Isn’t Good Enough™. While the light inside works very well, it needs to be somewhere in your peripheral vision to see it. It’s not bright enough to overpower the lights in the rig, and it certainly isn’t bright enough to notice if you’re not in the room. And generally speaking if you’re doing anything in the rig that makes noise, you generally can’t hear the bell outside. Since the circuit is so simple, and everything works off of the simple diaphragm switch in the bell, I decided to add an additional feature, a classic mechanical two tone “Ding Dong” doorbell.

I was able to pick one up at the local Do It Best hardware store for the very reasonable price of $14.99.

A household doorbell is pretty simple and straightforward. It’s powered by regular old household 120v AC, which goes to a transformer, which knocks it down to 16v AC. The transformer is separate from the doorbell box, and usually is mounted somewhere in the house where it’s out of the way, because it’s ugly and bulky and would make the bell box that hangs on the wall bigger and heavier. Then there’s small gauge bell wire that loops to a momentary push switch (the door bell button) to close the circuit. 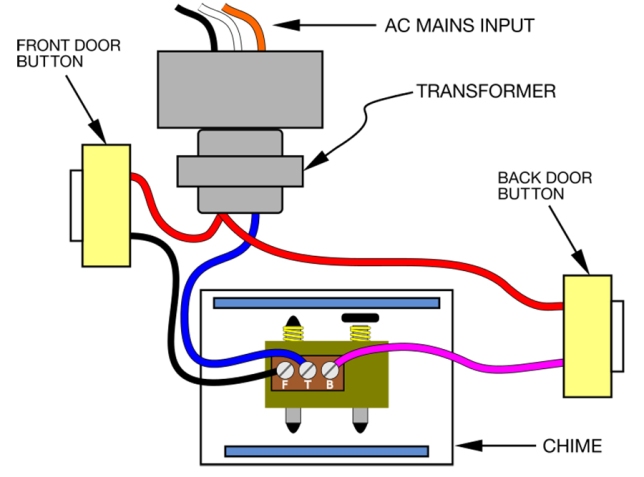 When the switch/button is pushed, and the circuit is closed, electricity flows from the transformer to the solenoid inside the bell box which pushes out the striker/plunger to smack the first bar, and give you the “ding”. When the button is released, the electricity stops flowing, the solenoid is de-energized, and the spring on the solenoid pulls the striker/plunger back through the solenoid where it smacks the second bar, which gives you the “Dong”. In cases where you have a rear button which produces only the “Ding” or the “Dong”, that is accomplished by another striker that smacks one bar, but on the return stroke it’s blocked by a barrier so it never gets to the second bar. Imagine going through your whole life only living up to half of your potential because a tiny piece of plastic is in your way. Depressing.

And here’s how it works:

Just for fun, this is how it SHOULD work…

In my case, I don’t want to put the button out on the road because it would last for exactly one “Ding Dong” and then it would be ground into powder by the second set of wheels on a truck, and I already have a “button” in the form of the diaphragm switch on the bell. So I’m simply extending the circuit for the bell and the light and adding this one in. Which means the wire that normally runs between the solenoid, the switch,  and the transformer just gets shorted to run between the transformer and the solenoid. If I were to plug the whole thing directly into an outlet wired that way, it would “Ding” and the constant flow of electricity would just hold the striker against the bar, presumably for all eternity. But since it’s plugged in to the other circuit, I’m extending that signal bell switch to do double duty.

I also put on an extra long lamp cord power line so I can put it where I want it, and because I might want to turn it off, I put in an inline rocker switch. It works like a charm, and is loud enough to be heard over the TV or running water, wherever we are in the rig. It looks a little rough because of the transformer, so I am going to find a box that I can use to hold both the transformer and the doorbell mechanism.

UPDATE: The doorbell turned out to be REALLY loud inside the rig, and Trace would jump every time it would go off, so I put a little strip of Gaff tape on the tone bars so deaden it a little. Worked like a charm. And I’ve said it before, but it’s worth repeating: If you’re using duct tape, just…stop. Get yourself some gaff tape

and thank me later!

Here’s a super short clip of it functioning, with bonus Tracy directing trucks in and out in the background.