I would love to say I was smart enough to have planned being in the path of totality for this eclipse, but to be honest it was just dumb luck.  We accepted our job in Oregon because I liked the area and the pay was generous, and I was only vaguely aware that an eclipse was happening in the area this year.  It wasn’t until a good friend of mine Jim (who was smart enough to find a great job right in the main path of totality.  See their blog post here.) told me we were right on the edge, that it even registered for me.  Once we arrived though it was hard not to be aware of it.  Over one million tourists were coming to Oregon for this event and the radio stations and newspaper have been full of information about it for over a month.

Plus the various government agencies have been putting together plans.  Now I am a huge fan of plans, and risk management plans are some of my favorites, but even I thought it all might be overkill.  The agencies have been treating the eclipse the same as a natural disaster and their plans all reflect that.  Don’t get me wrong, I appreciate the forethought and folks working so hard to get it right, but it started to feel a little like the Y2K craziness and folks started calling it the ApocEclipse or Y2E.  We even had an action plan for our jobs, and again I appreciated the forethought, but ultimately we are filling up toilet paper and cleaning restrooms, and that’s not really that complicated.

(I know you’ll be completely shocked, but I totally disagree. When it comes to large scale live events, there’s no such thing as too much planning, and there are the bad results of countless man made and natural disasters to prove that. And who would ever want to be the person that anyone, or worse, everyone, looks at when it all goes wrong and hear “Why weren’t you ready for X?” I would think that for people in those positions, there’s nothing better in the world than having a large heavy binder that they never had to open. We all got the same 30 page emergency preparedness overview from the company, and I bet I’m the only one of us that read every word, and I slept peacefully last night. – Lee)

National guard troops were stationed right outside our campground for 2 full days. But only 9-5 because apparently emergencies don’t happen after 5pm. (I’d like to point out that those things are pretty much useless once you’ve taken the 50 caliber machine gun off them. – Lee) 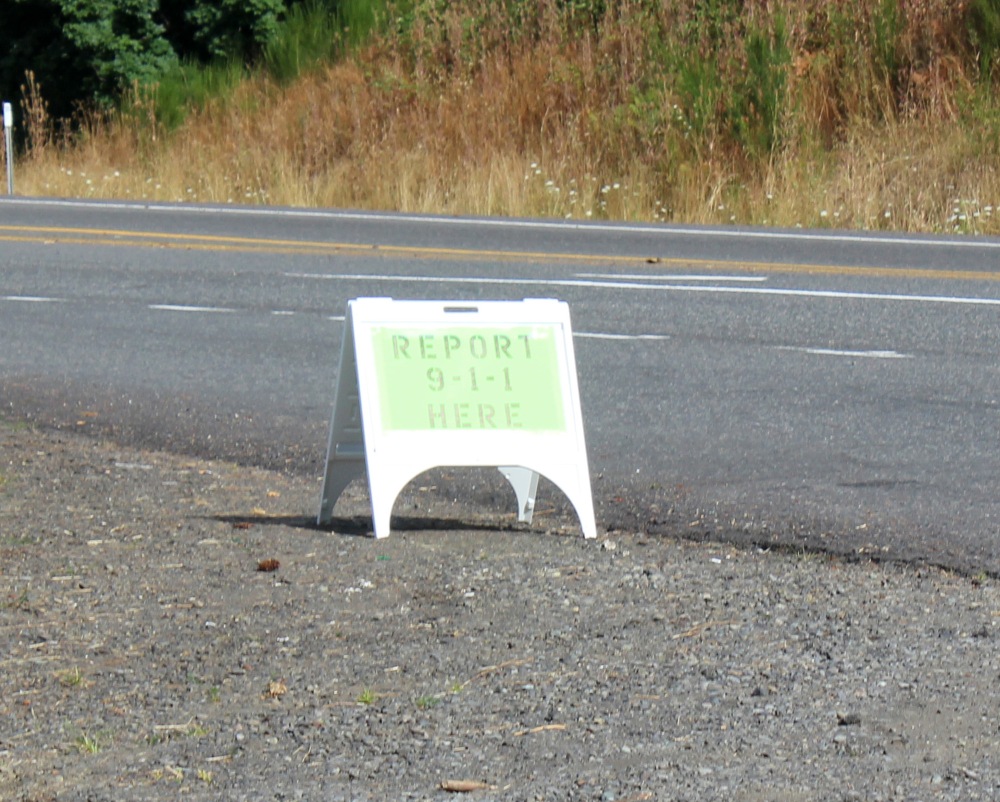 This sign was actually pretty cool, because after the fire last week we learned we are the first place people can call 9-1-1 on HWY 224. I was glad to see this and ultimately to have people stationed there, because if something did happen, we would not need to coordinate it.

Plus I was super annoyed by the raptures various radio personalities were having over the event.  I was in an eclipse in 1980, and yes it was cool, but not the “life altering event” folks claimed it to be.  The sky was dark, and back then we used pin hole viewers, and yes it was neat, but I don’t think my personality was fundamentally changed or anything.  The part that I remember the most was that all of the insects went quiet for a moment and that was pretty eerie.  I always thought that was a total eclipse, but Lee looked it up and turns out it was not.  This time we were going to be on the edge of “totality” and according to the experts that was something extra special.

Needless to say I was pretty skeptical about the whole thing and kind of bummed because Mondays are my campground day.  5 miles upriver at Moore Creek was in the path of totality but the campground itself was not.  I was trying to figure out whether I should take a break and go upriver, when one of my bosses stopped by and suggested I come upriver with them.  That was incredibly nice and allowed me to see the event guilt free, plus it was nice to have people to hang out with when it happened.  Lee came and picked me up and we found wonderful spots to watch the event from.

We had discussed taking pictures and I knew I couldn’t really get anything until totality but took my camera anyway.  Thankfully I did, because Lee had an idea to take the lenses from the glasses and tape them on the camera.  It was pretty low-tech but got the job done and he got some amazing pictures.  (I learned a long time ago that it doesn’t matter how you get the shot, it only matters if you get the shot. – Lee)  Plus the glasses themselves were very cool.  Our company supplied them and we had extras on hand to give to folks who were watching from Moore Creek, and I have to say that was a totally different experience than using a pinhole camera.  Being able to stare into the sun was pretty neat and we spent about an hour watching the moon cover the sun. 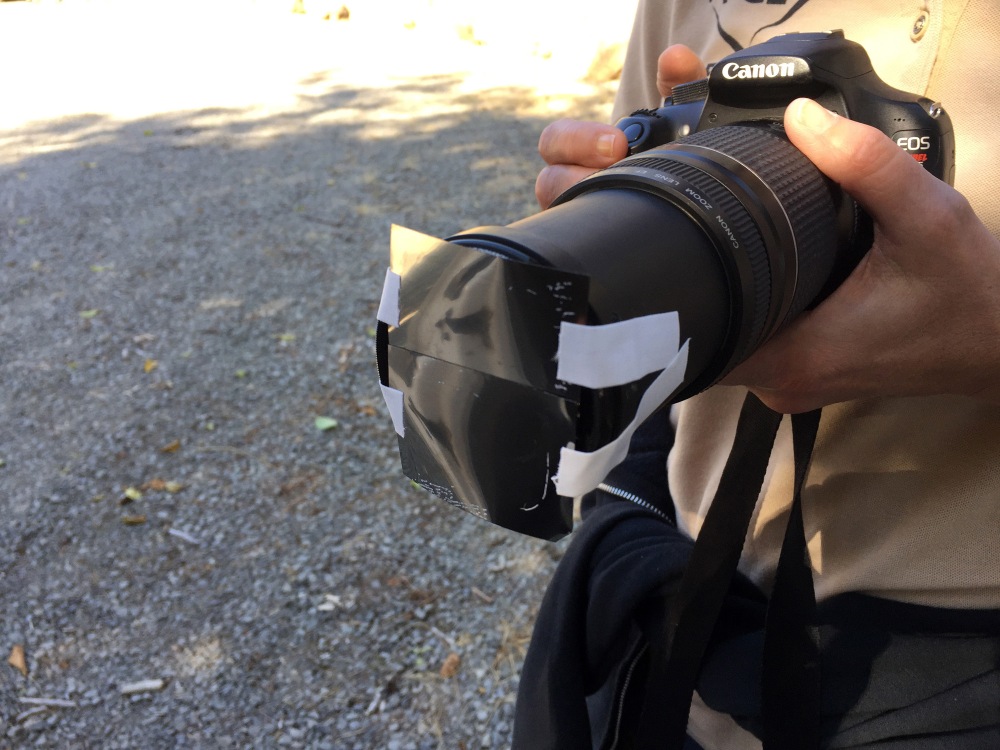 Lee’s improvised lens cover. The tape came from our truck’s first aid kit (Normally I carry a roll each of black and white gaff tape, but I was in the company truck, not my own. – Lee)

Don’t worry he was being super careful with his vision.(I had the solar lens on while I was doing this. – Lee) 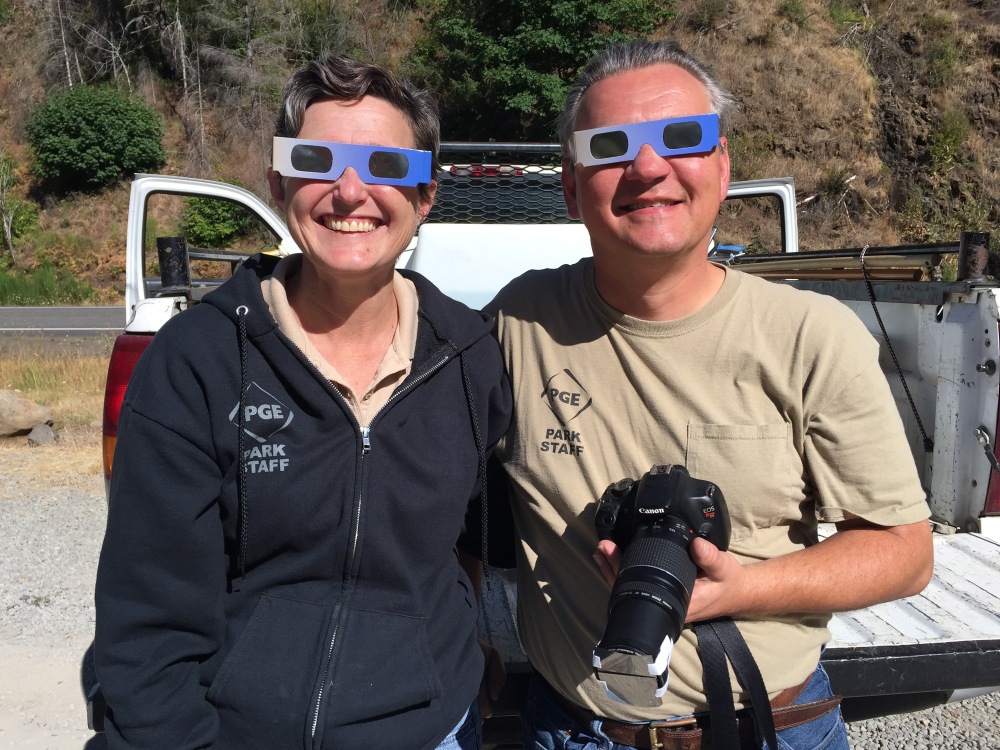 The glasses were so dark you couldn’t see anything but the sun. So you really had to stand still when you wore them.

After waiting quite some time it started to get dark and the air chilled considerably.  Birds started to make some evening noises and a twilight fell over out parking lot we were in.  Then we saw our first stars and finally the moon completely blocked the sun and we could take of our glasses.  We had a brief 20 seconds of totality and I have to admit it was pretty amazing.  No, it wasn’t life changing, but it was exciting, and we were especially transfixed by the corona around the sun, the aura around the moon and the rays of light that were on the ground.  That part was really neat and unexpected and the gravel parking lot was the perfect place to see the rays at our feet.  We took some pictures and video which tell the story much better than I can, but I will say it was a special moment and I am so glad I made the trip 5 miles to be in the totality. 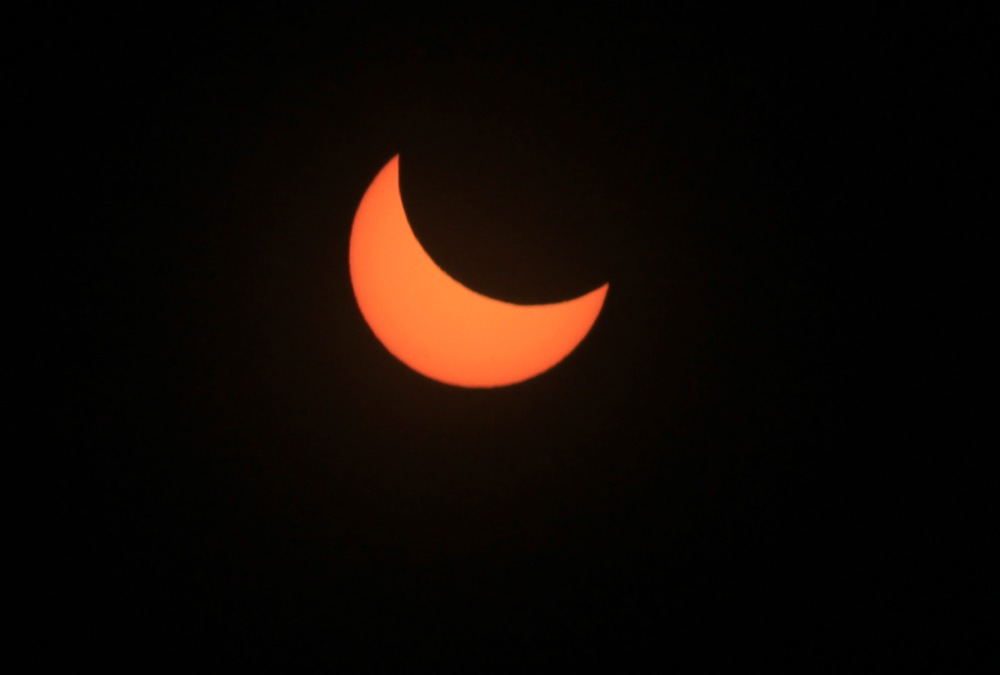 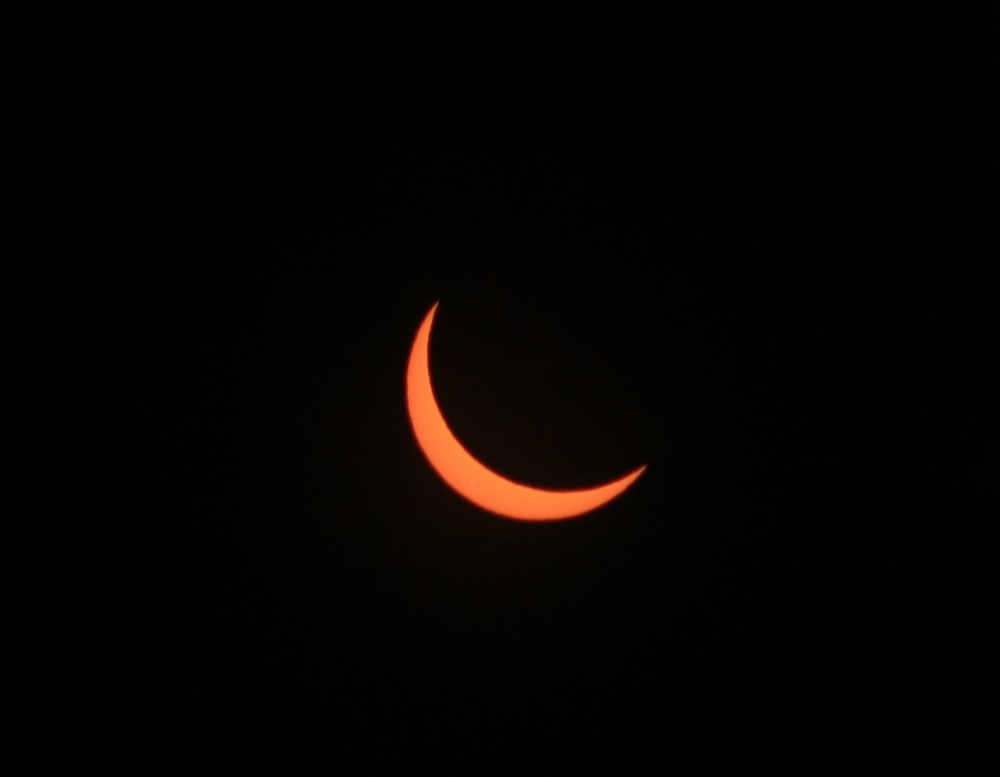 It stayed in this phase for what seemed like a long time and then WHAM!… this is what we saw: 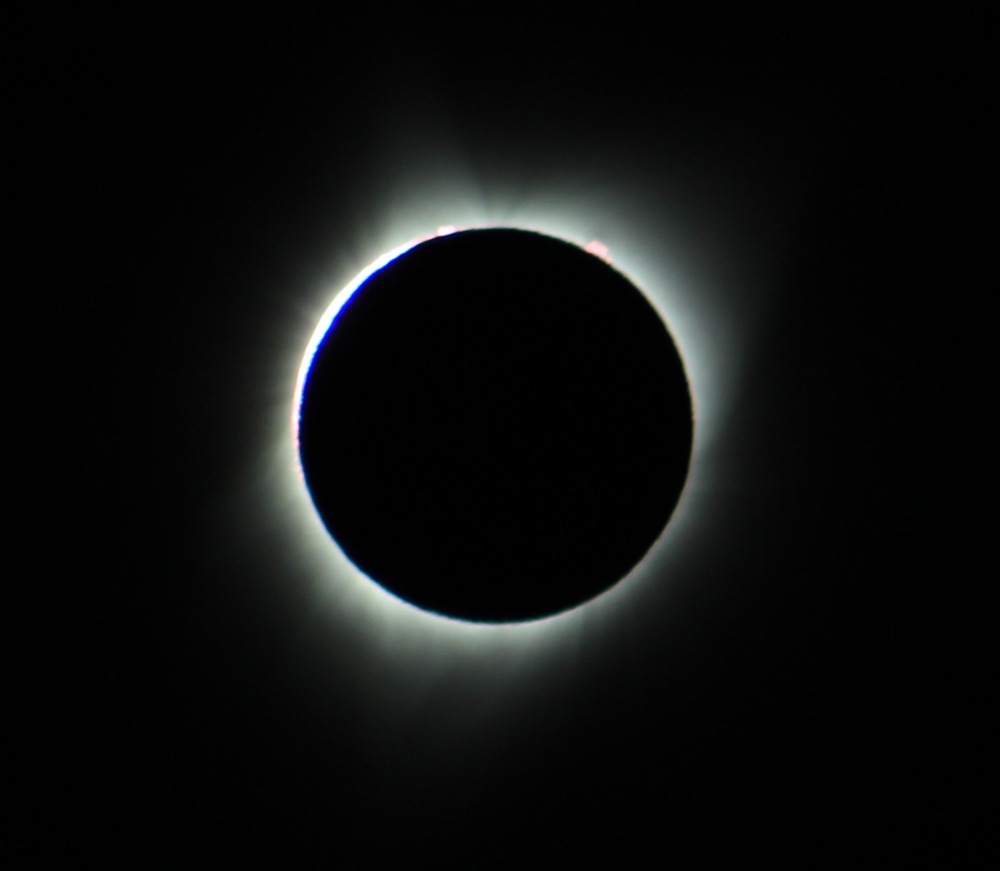 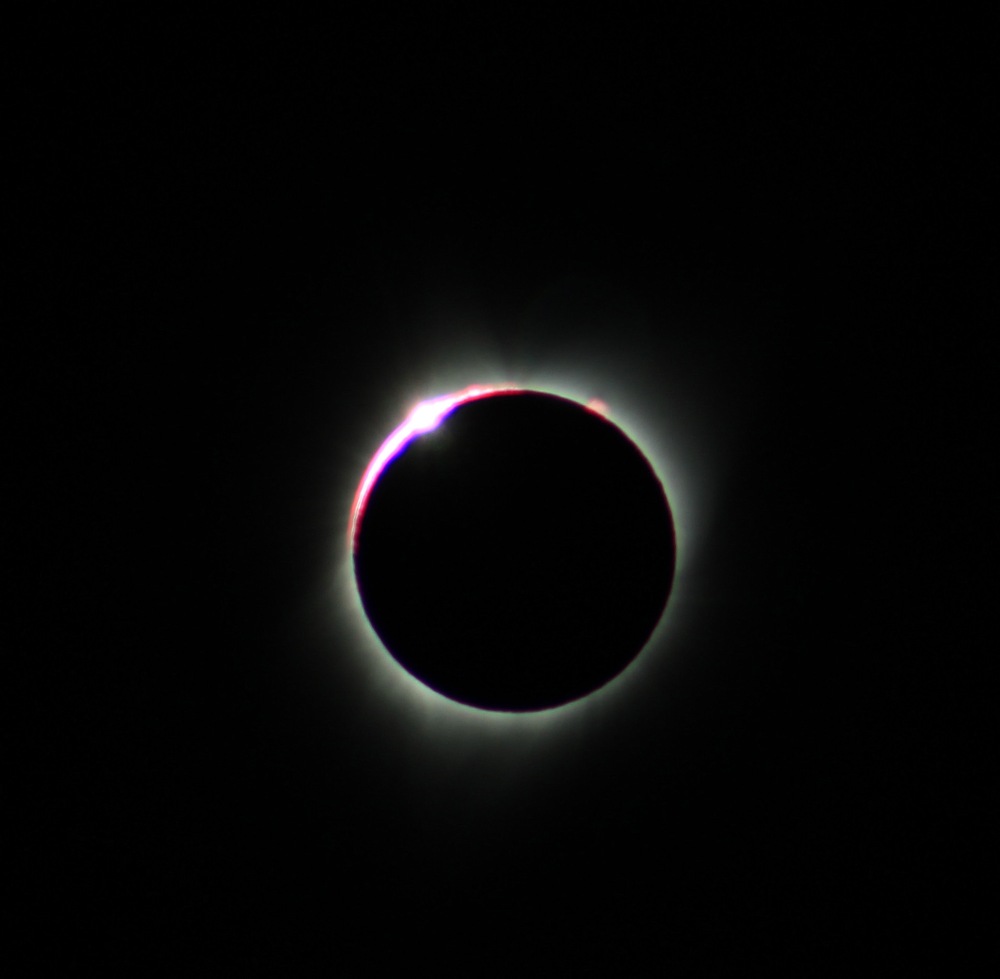 As the moon passed the sun started to peek out, and the colors were pinks and purples. This is as close as Lee could get to the “Diamond Ring” effect that people love so much about an eclipse. If you’ve never seen it, just do a Google image search for “eclipse diamond ring”.

Brief video of the ripples of light waves on the ground.

15 thoughts on “First Time in the Path of Totality”