There are several different ways to get from Nevada to Oregon, and because we wanted to avoid the recently hiked California fuel prices and explore the road less traveled, I picked Nevada State Route 95.  As I have mentioned before, I use a large paper Atlas to keep track of the roads we have already been on, and this section of road was a new one for us.  Although it was incredibly barren, I found it quite beautiful, and the road was well maintained throughout our drive.  We also skirted Death Valley and from what little I got to see, it definitely calls for a longer visit in the future.  The rock formations were stunning, and although the desert was missing my favorite Saguaro’s it was beautiful in it’s own way.

When we travel we generally look for either free campsites on US Public Campgrounds, Passport America, or  Freecampsites.net.  All things being equal we will take a decent Passport America option because they are generally close to the roads we are traveling, and are more efficient for one night, but this area of the country has lots of free land to camp on so we got a little more creative with our choices.  Due to where the campgrounds were available we chose the amount of travel miles per day, and unfortunately it broke down to two longish days with a short day in the middle.  I would have loved to have evened that out a little, but since we were traveling in sparsely populated areas it was more difficult.

Our first stop was a great find  at Sportsman Beach which is a free BLM campground near Hawthorne, Nevada.  This campground is right on  beautiful Walker Lake and the views were stunning.  Plus we saw wild horses and burros along the lake edge and there were only a few campers there.  Sometimes you stumble across a place and wish you could stay a few more days, and this definitely would have been one of those places, but as usual we were on a schedule to reach our next work gig in time, and that was not possible for us.  Still, we were glad we stumbled across it as it was a nice end to a long driving day.

The view from our campsite on Walker Lake.  The picture doesn’t really do it justice, and yes, the water was that blue.

Next was a short day where we stopped in Winnemucca, Nevada.  This is the last town before hitting Oregon and they had a decent Passport America park called New Frontier RV Park where we got full hookups for $19 for the night.  The sites are crammed close, but all brand new and beautifully maintained.  It also had tons of little three person cabins, which turned out to be man camps for the miners who work nearby.  We saw lots of man camps up in the Dakotas, but this one was really nice and new.  I hope they manage to keep it that way, because it was a nice place to stop for the night.

The next day was the longest drive because we wanted to be relatively close to our summer gig in Mount Hood National Forest.  There were lots of choices of routes to take, and since we had to cross some mountain passes we ultimately ended up trusting the GPS route.  One advantage of  our Rand McNally RV GPS

is that it knows the length and height of our RV, and will avoid potential hazards.  Standard maps on Lee’s phone and of course the paper map don’t really help with that much, so when in doubt we tend to trust the RV GPS.  Plus, cell coverage was pretty spotty, but the GPS works well despite that.  It doesn’t always pick the most efficient route, but it does pick the safest, and since these were all new roads for us we chose to trust it.  Even using it though we had several downgrades that were not well marked with highway signs.  We were both surprised since generally there is good signage, but there were some long steepish grades that had no signs at all other than telling trucks to chain their tires on the climb.  It’s tough driving blind in these situations and was pretty stressful for Lee, but he did a good job especially when our route to the campground took us down into a deep canyon in Terrebonne, OR.

I had found a Passport America site that was pretty far off the main road, but the price was right, and we headed that way.  Unfortunately it was the worst kind of Passport America with beat up old trailers and worse, no availability, but luckily there was a very nice Good Sam park just a mile down the road.  We were both tired and unwilling to drive up the canyon to find another place so we spent the $35 and stayed at River Rim RV Park.  Although the sites were close to each other, hardly anyone was there, and since they put us in the camp host site we had a beautiful view of the surrounding cliff walls.  Lee also discovered a little path which took us to an observation deck and the views were stunning. I probably wouldn’t want to stay here in season, but what a great choice for one night, and we enjoyed both the full hookups (we needed heat because it was cold that night) and the beautiful setting.

The view from our site

View from the observation deck

The next day we had only a few hours to drive and it was a good thing because we had to go over several mountain passes.   When we finally stopped for lunch it was at Government Camp, and I was surprised to see some people sledding in the ski area that still had snow on the ground.

We drove out of the snow pretty quickly though, and eventually made it to Promontory Park.  It’s not open for the season yet, so it required some coordination to meet someone to open the gate, find our site, and get keys, but everyone there was super nice and accommodating.  Our site isn’t finished yet, so we were given several choices and eventually ended up in the general area we will be staying for the summer.  We have 50 amp power, potable pressurized water, and they brought us a waste tank so this will work for a week or so until they have an opportunity to finish the pedestal and move the storage container out of the way. The site was a little disappointing at first, but then I saw a path and a short walk down took us to a beautiful boat ramp we can hang out this summer. Once we get all settled in it should be nice and quiet, plus since it is outside of the campground proper we won’t have folks knocking on our door at all hours.  There will be two campground hosts for the campground next door, but we will be covering the marina and a couple of offsite locations. 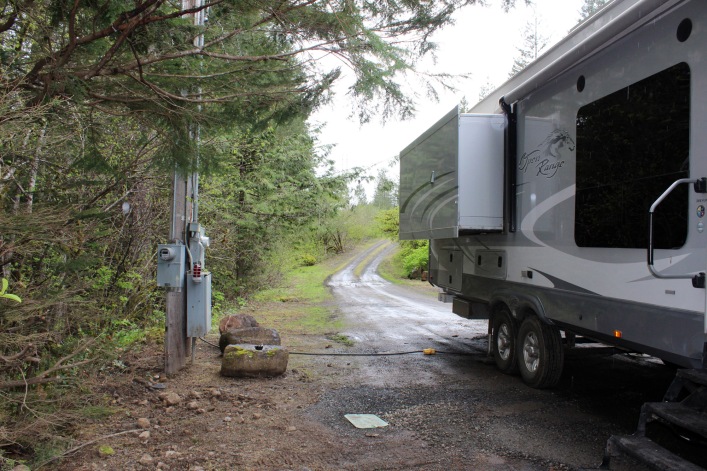 We needed to be close to power 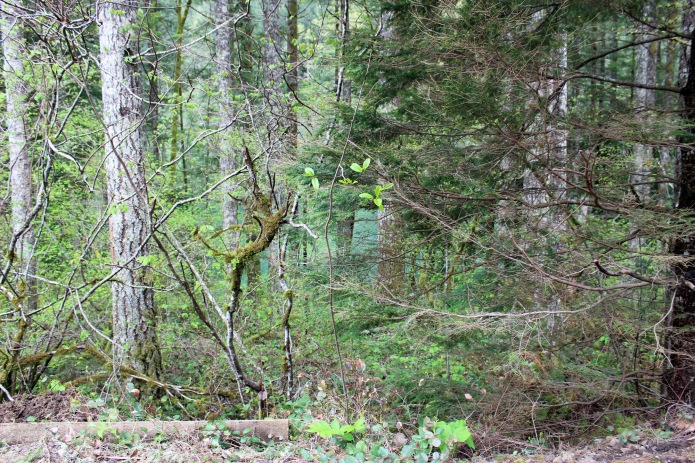 We have a peekaboo view of the lake 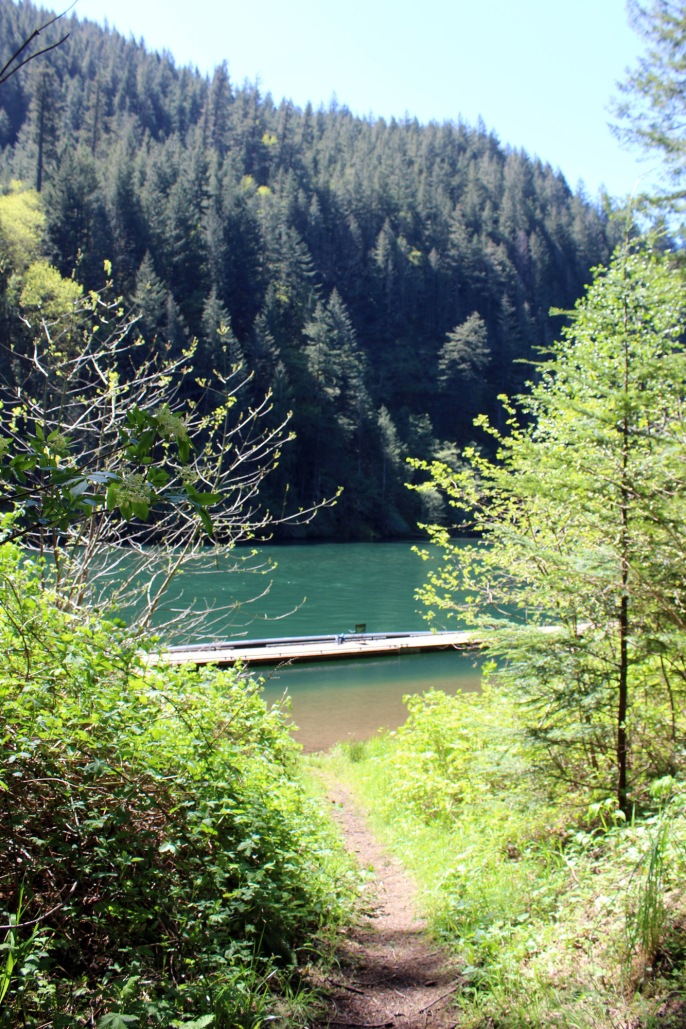 The trail leading down to the Clackamas River

The flowers are starting to bloom

View to the left 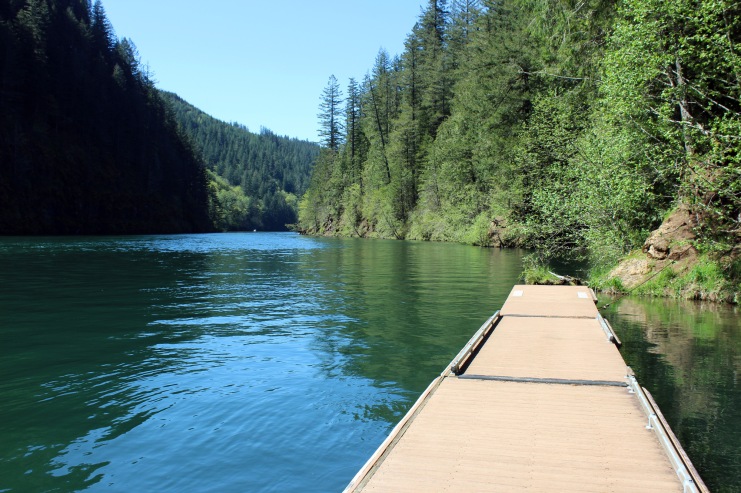 Stunning view to the right 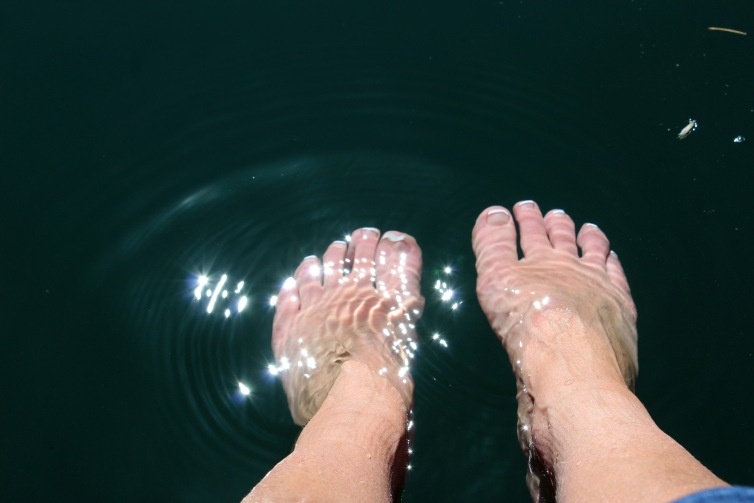 I sat on the dock and put my feet in the water, which is deep and pretty chilly but felt great in the sun

These Yomes are sort of like a yurt. They’re close by and their path meets ours down to the boat dock

Once we arrived and got set up we spent the rest of that day and the following getting oriented.  This part of Oregon is full of really small towns and each one has it’s own personality.  More of that in the following months, but for right now we found a Supercuts and got hair cuts, grocery shopped at a WinCo which is an employee owned grocery store with fantastic prices, and a great selection, and saw Mount Hood!! You can’t really miss the mountain, although with the very tall trees, views of it sort of spring on you and since it creates it’s own weather I am sure we will be taking lots of pictures of it.  Everything was super green and in bloom and the weather (rain aside) has been wonderful after the desert.  The contrast between the two landscapes has been striking. 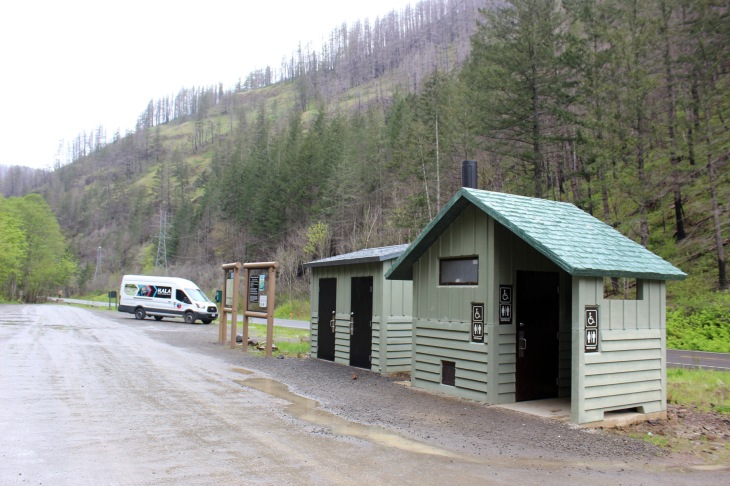 One of the upriver boat launch areas with changing rooms that. This is part of what we will be covering. 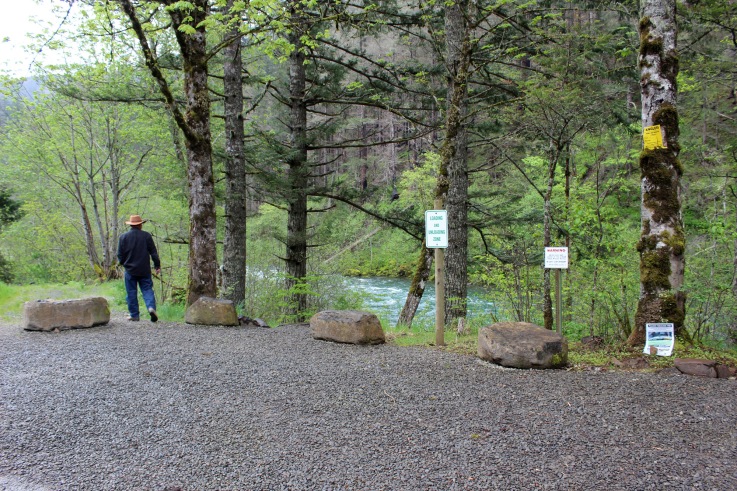 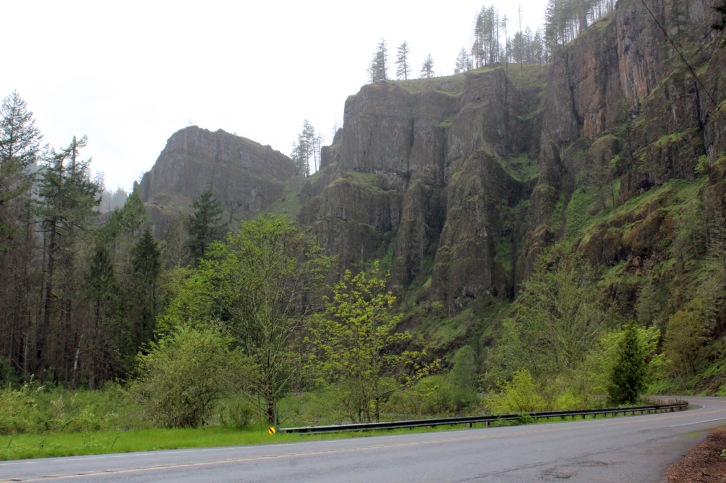 This is around the corner from us and on our daily rounds! The road we live off of is an Oregon Scenic Byway

We saw numerous waterfalls including one 200 feet high!! 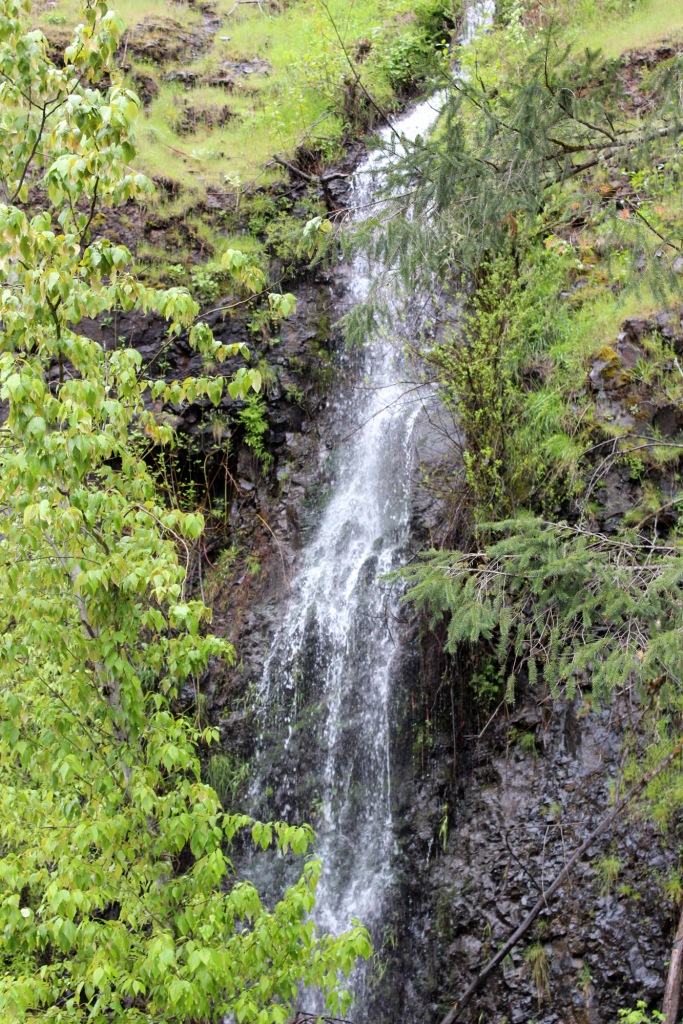 Big trees pulled out of the river near the marina

Hooray!  Cheap and consistent hair cuts for the summer 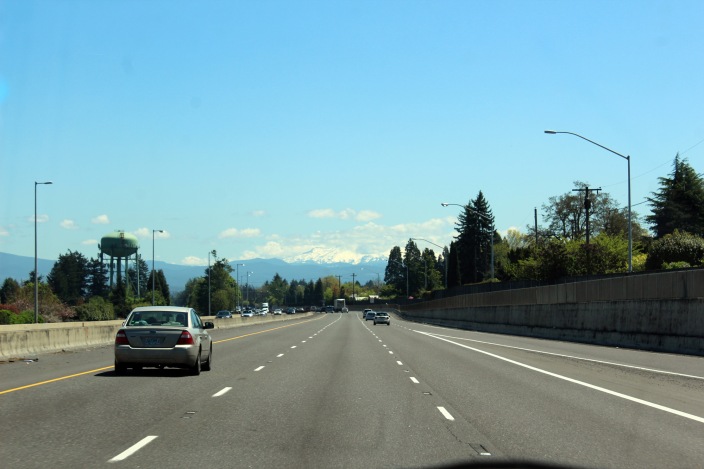 Mountain views from the highway

We drove closer to the mountain to get this pic.  The mountain has 11 glaciers on it so I am sure you will be seeing more of it!

So, first impressions are fantastic.  I traveled to Portland for work many years ago and fell in love with the area, and I was hoping it would be as I remember.  Super green, people are generally very friendly, and lots and lots of nature.  The traffic is pretty congested, but since we will be working weekends hopefully we can avoid the worst of it and unsure about the weather but yesterday was 82 degrees, very sunny, and absolutely beautiful.  Oh, and our We Boost

is working so I am able to blog from the comfort of our rig.  Our booster has been hit and miss on the road to be honest, and usually it’s not worth the trouble of putting it up.  But in a situation like this, where we are in one location for a while and have a very weak signal, it works pretty well.  We barely had one bar and couldn’t do anything but text before putting it up and now we can use the internet and make phone calls.  It’s not a perfect solution, but I am really glad we have it.