New Years Eve we received an invitation from the owners for a “no host” event at Red Lobster.  I had never heard this expression before, but after googling it learned no host means that every person pays for their own meal.  We generally don’t go out on “amateur night”, but since the dinner was at 7pm and we love Red Lobster we decided to go.  Since we hadn’t gotten paid yet and had no idea what we were going to make, I was a little concerned about spending the money, but we decided to roll the dice and go ahead and go.  We were on time, but the last ones there, and the open seat was next to the owner.  Actually this was pretty cool as I had a chance to talk to him about the tree business.

The business analyst in me was fascinated by the parts of the operation we couldn’t see and he was happy to describe it for us.  It’s definitely a year round operation, with selection of trees happening in August and September.  Apparently different trees are pretty at different heights and the only way to know is to walk the lots and hand select them.  That’s what the owner does and is the main reason his trees are so beautiful.  Every tree (whether it is selected or not) is trimmed every year.  Here’s a pretty cool video that shows how they trim them.

Along with care of the trees and tree selection, deliveries need to be scheduled.  Here again the owner differentiates himself from many other tree stands, because instead of just doing one or two cuts a season and having the trees sit, he schedules numerous cuts and deliveries.  The end result is a fresher tree, but the logistics of that are tough as the tree is cut around three days before it is shipped.  The main schedule for the cuttings and shipping is set up in October, but then the owner oversees the process from Texas and makes adjustments the best he can depending on the sales.  There are sales patterns from year to year, but then sometimes outside factors throw a wrench in things.  That’s what happened this year with all the rain on the busy weekends.  The trees come in large semi trucks and then need to be unloaded and separated by what each tent needs.  Really interesting, and clearly a first class tree organization.

So dinner was enjoyable but not great on the wallet.  We spent way more than I was hoping on dinner and definitely put the final nail in the coffin of this month’s eating out budget.  It’s really tough to not eat out when we are working these long hours.  We don’t have nature type entertainment so you sort of default to other kinds, shopping, dining out, which are all obviously more expensive.  Maybe I am just particularly sensitive to it because the year end accounting is looming.  I like providing the budget information, and think it’s important for us to stay on track and to help others contemplating the lifestyle, but I don’t always like seeing it in black and white!

Sunday I was all ready to watch the Rose Bowl Parade and was curious to see how the TV watching experience would be different after I got to attend last year in person, but realized this was one of those weird years where New Year’s Day falls on a Sunday and the parade was moved to Monday.  We did a little research and it turns out the Sunday exemptions started in the 1800’s and was because the parade organizers were afraid the parade would spook the horses that were at the churches along the route.  That “never on Sunday” exemption has continued to today, so no parade on Sunday for me.  That’s OK though because I had football to watch.

During the day,  I also had a friend send me a picture of a political ad that showed up on my blog.  I have been paying $20 a year for the site and getting close to running out of storage, but never really worried that much about the ads.  I assumed if they appeared they would be generic in nature and not offensive to anyone.  Once it was brought to my attention, I looked at the Word Press site and discovered it would be $79 a year to turn the ads off.  I could participate in their ad program to help offset the cost, but since you have no control over what type of ad content occurs, Lee and I just decided to pay the extra $79.  The Word Press version that allows you to pick and choose your custom ads is much more expensive at $279 a year and frankly I don’t think there are enough products at this point I would want to advertise to make it worth it.  I was contacted a few times this year by people wanting to place an ad on the site, but in every case I didn’t feel the service/product was something I would use. I’m old school that way, believing an endorsement should only be provided if the person actually uses and values the product.  Anyway, that’s where we stand right now.  I own the domain and at some point I could just move the blog to a different provider, or create my own website, but that task is pretty daunting since it is outside of my skill set.  2017 may be the year to tackle it though, if for no other reason than I have to have the space to upload pictures.  For the time being the ads should be completely turned off and if you see them, please send me an email at camperchronicles-at-gmail.com and let me know.

Simultaneously, Lee noticed that the hose on our blue boy was completely broken.  It happened from age and exposure to the elements and unfortunately since the blue boy has been discontinued we are not sure we can get the parts.  This is an absolute necessity since we are headed to Quartzsite, so the best thing I can say about it is better now than later. We discussed just getting a standard holding tank, since we leave it on the back of our truck anyway, but Lee really likes that it has wheels just in case.  So Monday morning this will be on our list of things to take care of.

On the positive side, one of our readers lives in the San Antonio area and she reached out to me when we arrived to see if we could meet up for dinner.  We love talking to people about the lifestyle and we love meeting readers so we were happy to go.  We met at Crystal Springs Restaurant which claims to have the best catfish in Texas.  That may be true, and Lee said it was pretty good, but he still likes Anna J’s catfish in South Carolina better!  The conversation was great and we were thrilled when we learned they had signed up for the RV-Dreams rally.  Just in case I haven’t mentioned it lately if you are thinking about full timing, we absolutely think the best thing you can do for yourself is attend an RV Dreams rally. We had a great time talking to them and really appreciated them buying us dinner.  So glad Linda reached out. 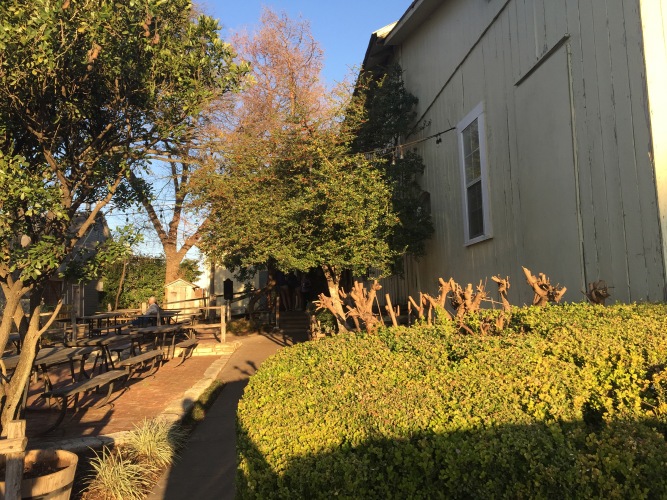 The inside was super cool and just packed with memorabilia

A mound of yummy onion rings

My shrimp was outstanding